No Calm after the Storm

Facing climate change in the Philippines

For Filipino families living on the coast, the end of a typhoon is just the beginning of their struggle. Julieta Cuya lives in the island barangay (village) of Rawis in Tabaco City, Albay, in the southeastern part of the island of Luzon in the Philippines. At 79 years old, she is the primary caregiver for her two grandchildren.

She and the children hid beneath tables as Super Typhoon Rolly (Goni), the world’s strongest tropical cyclone in 2020, collapsed their home around them in late 2020.

The typhoon brought torrential rains, violent winds, mudslides and storm surges to Luzon, the Philippines’ largest island. It left extensive damage in its wake, killing dozens, injuring hundreds and affecting 2 million people including those in the Province of Albay in the Bicol Region, which was one of the hardest-hit.

Julieta Cuya is a recipient of IOM’s shelter repair assistance that will allow her to rebuild her home after being devastated by Typhoon Rolly. Photo: IOM/Andrea Empamano

Julieta found her house damaged and her belongings missing after taking shelter in their neighbor’s home. Photo: IOM/Andrea Empamano

“When the storm calmed down, we had the opportunity to transfer to our neighbor’s place to take temporary shelter,” Julieta said. “When we returned to our home, we found a lot of our belongings missing, and our house in shambles. My head and my heart hurt.” 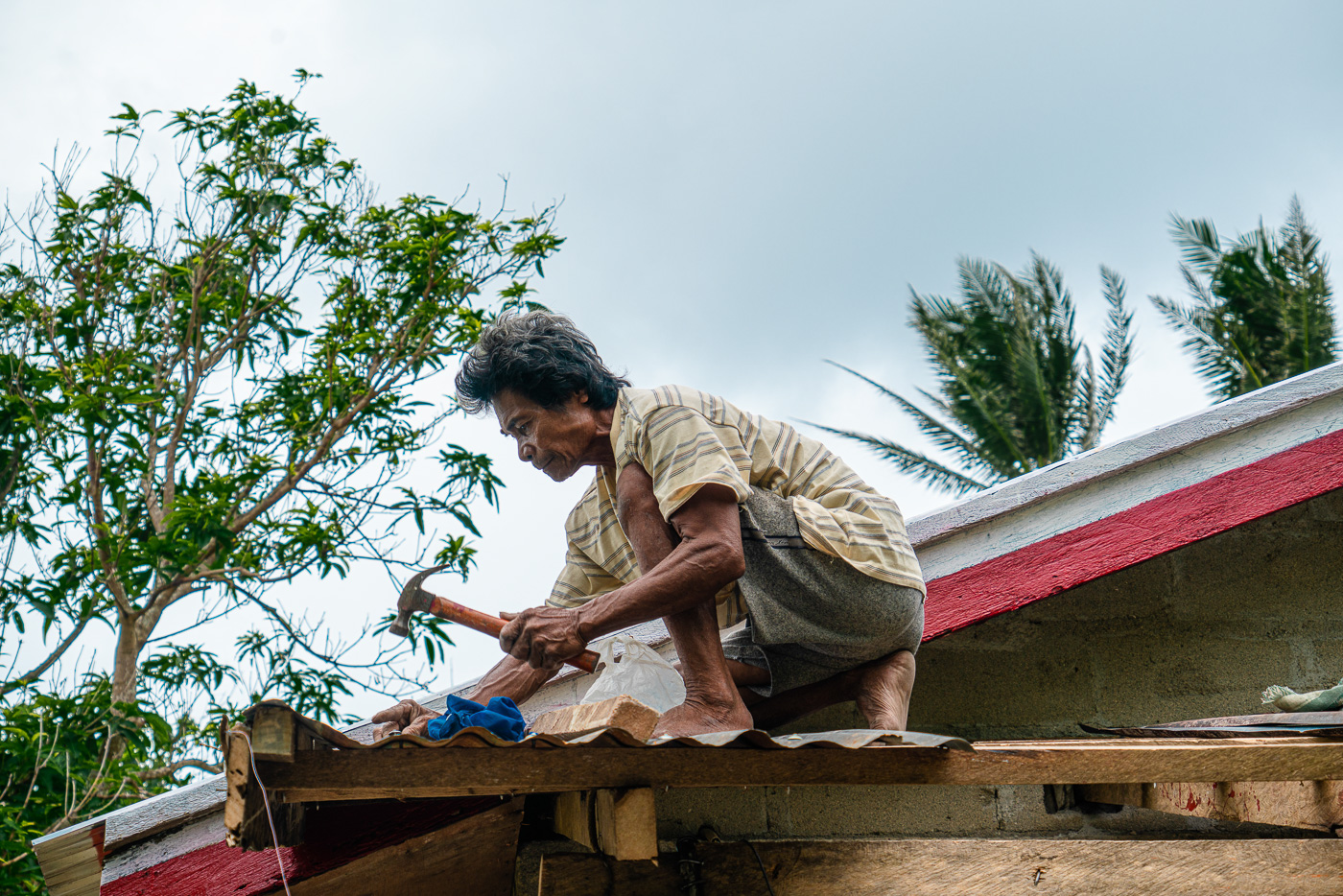 Forty-one-year-old Herlyn Boqueo was pregnant and caring for an infant when the typhoon slammed into Tabaco City. She took shelter in the home of their barangay kagawad (councilor) and waited for the water to recede. 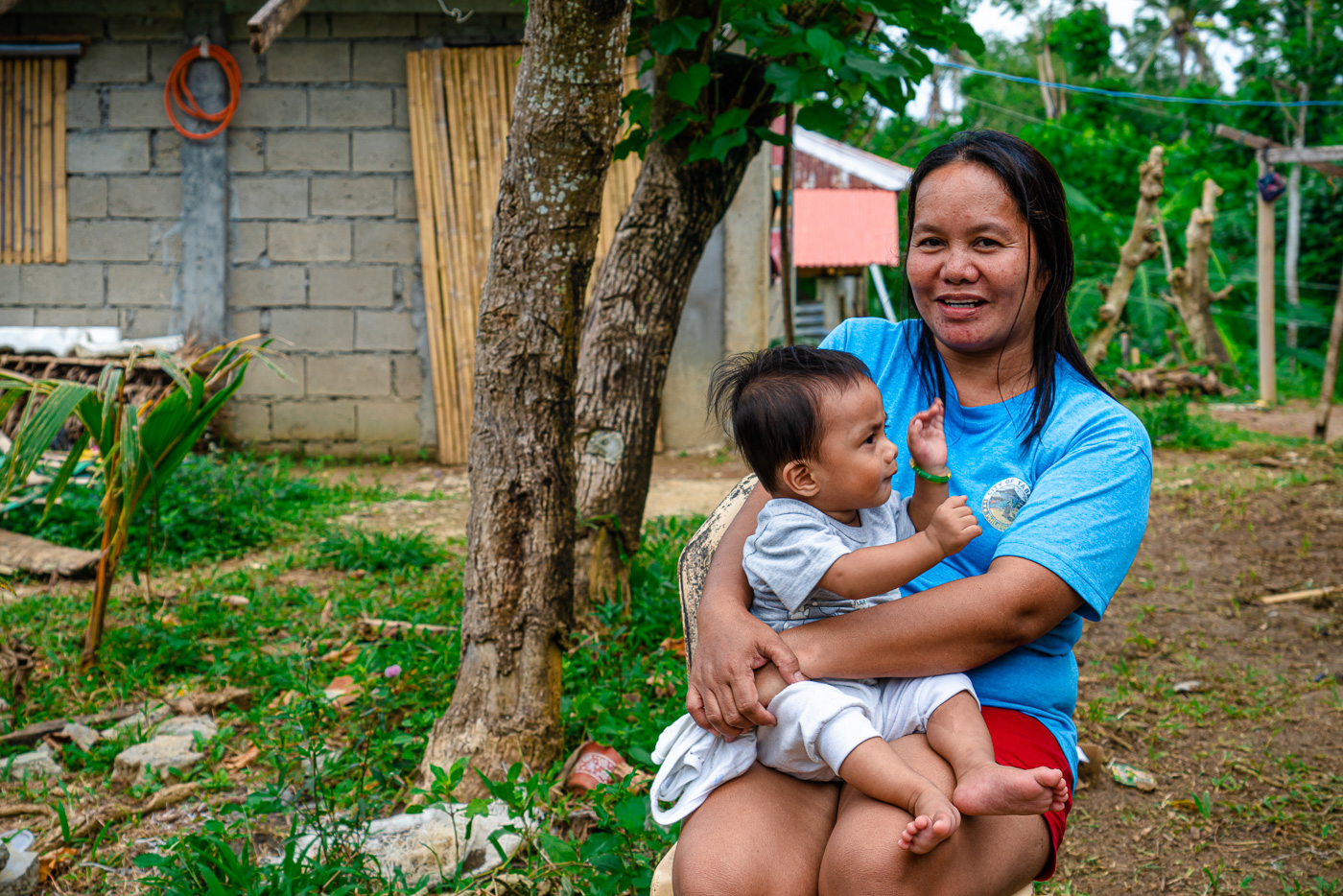 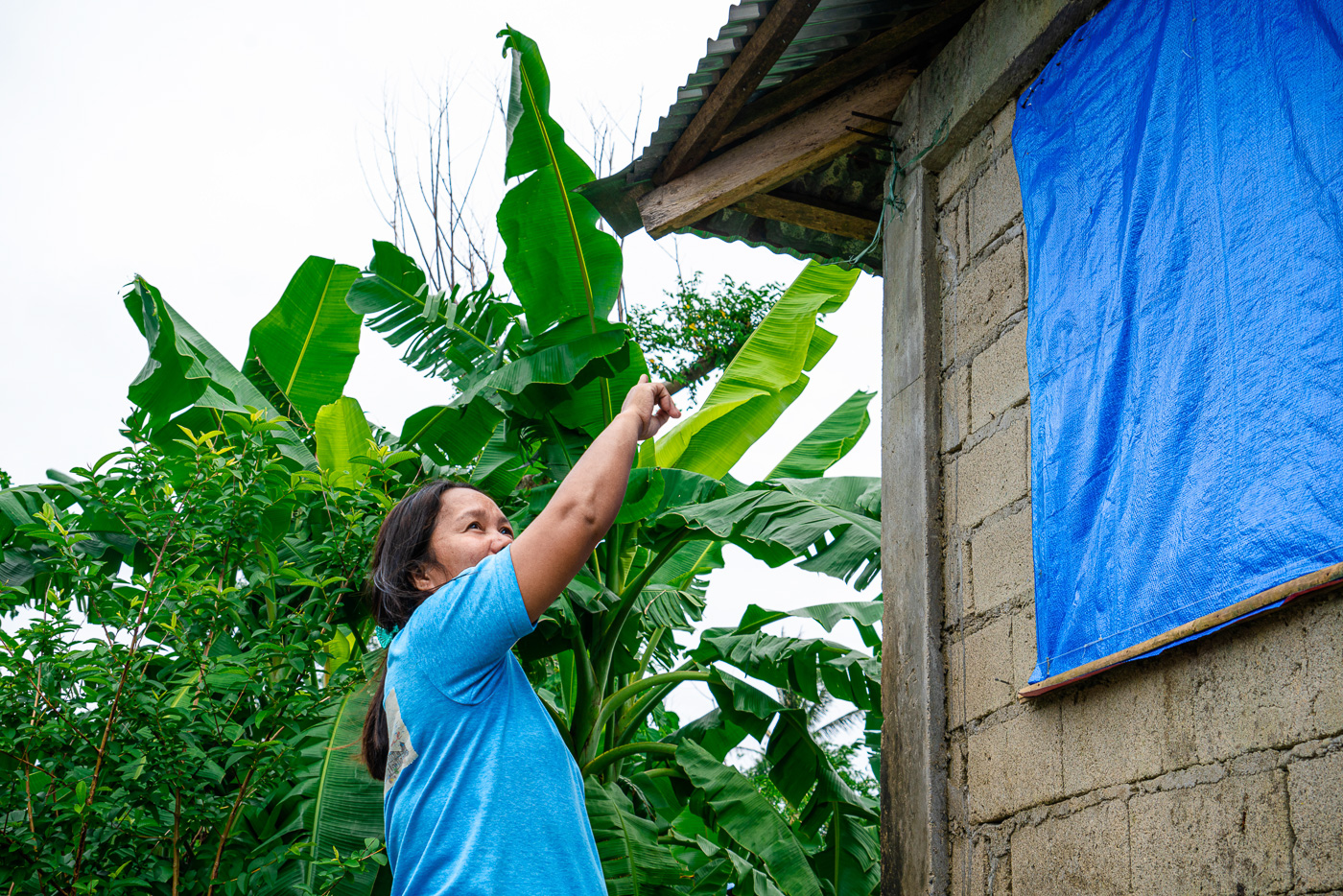 Herlyn’s child was born during the COVID-19 pandemic then weathered a series of typhoons in the five months since. Photo: IOM/Andrea Empamano

“I was scared because the water was getting higher and my child was getting wet,” she said.

“My child was five months old, born during the COVID-19 lockdown. When I returned to my home, all my clothes were wet. Thankfully, help came. I bought coffee and milk using IOM’s cash assistance and attended a training seminar. I was taught that the foundation of a house should be strong in order for it to remain stable during typhoons and natural calamities. I learned a lot.” 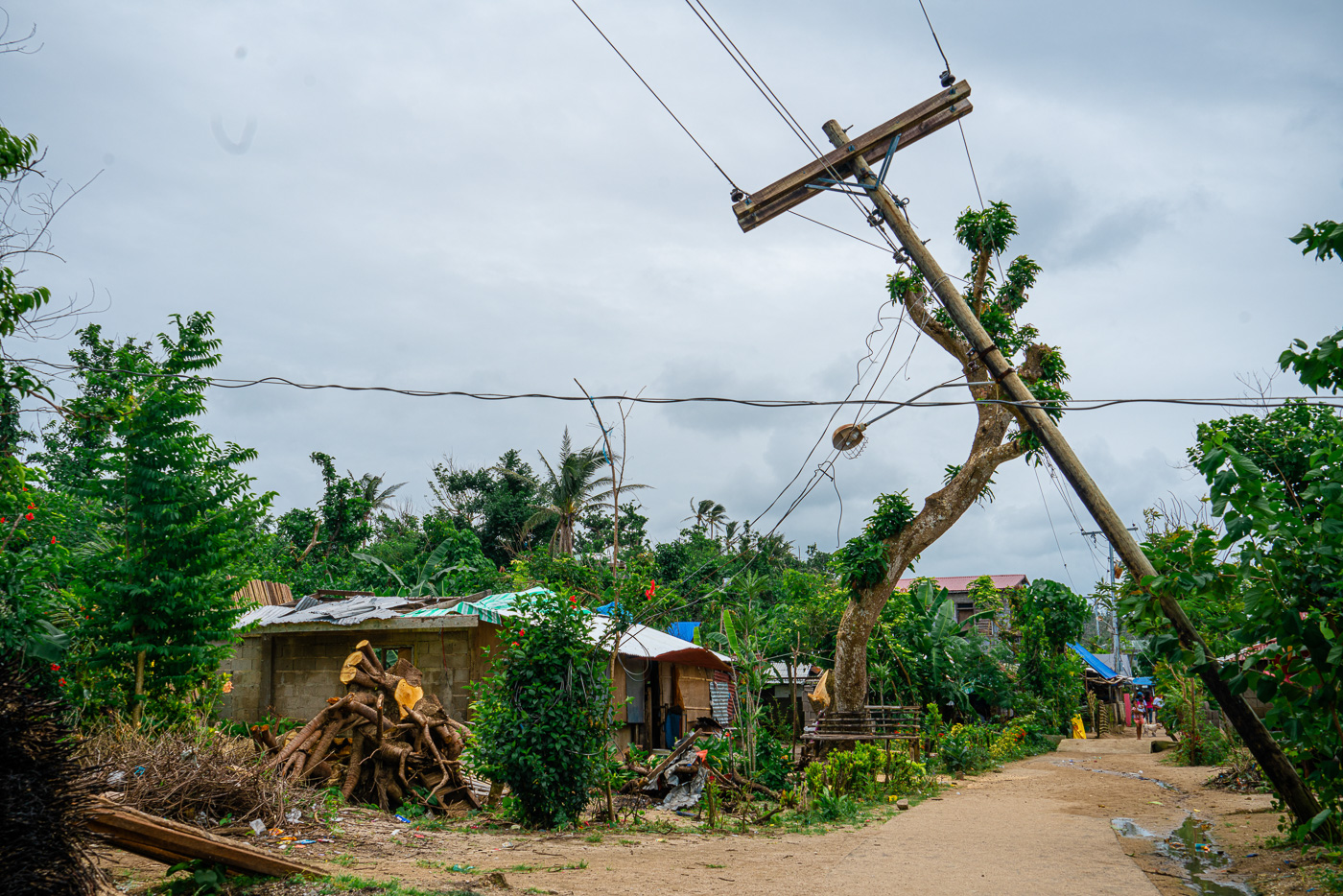 Federico was able to repair his home with support from IOM, after being provided with shelter repair kits and cash assistance. Photo: IOM/ Andrea Empamano

Federico Laprades Jr., a 60-year-old fisherman who is partially blind, also found his house and livelihood damaged by the storm.

“For as long as I can, I try to go out to sea every day,” he said. “It’s difficult but I need to keep working and I still have one good eye left. I have my own bangka (small boat) that I use, but it was damaged by the storm.” 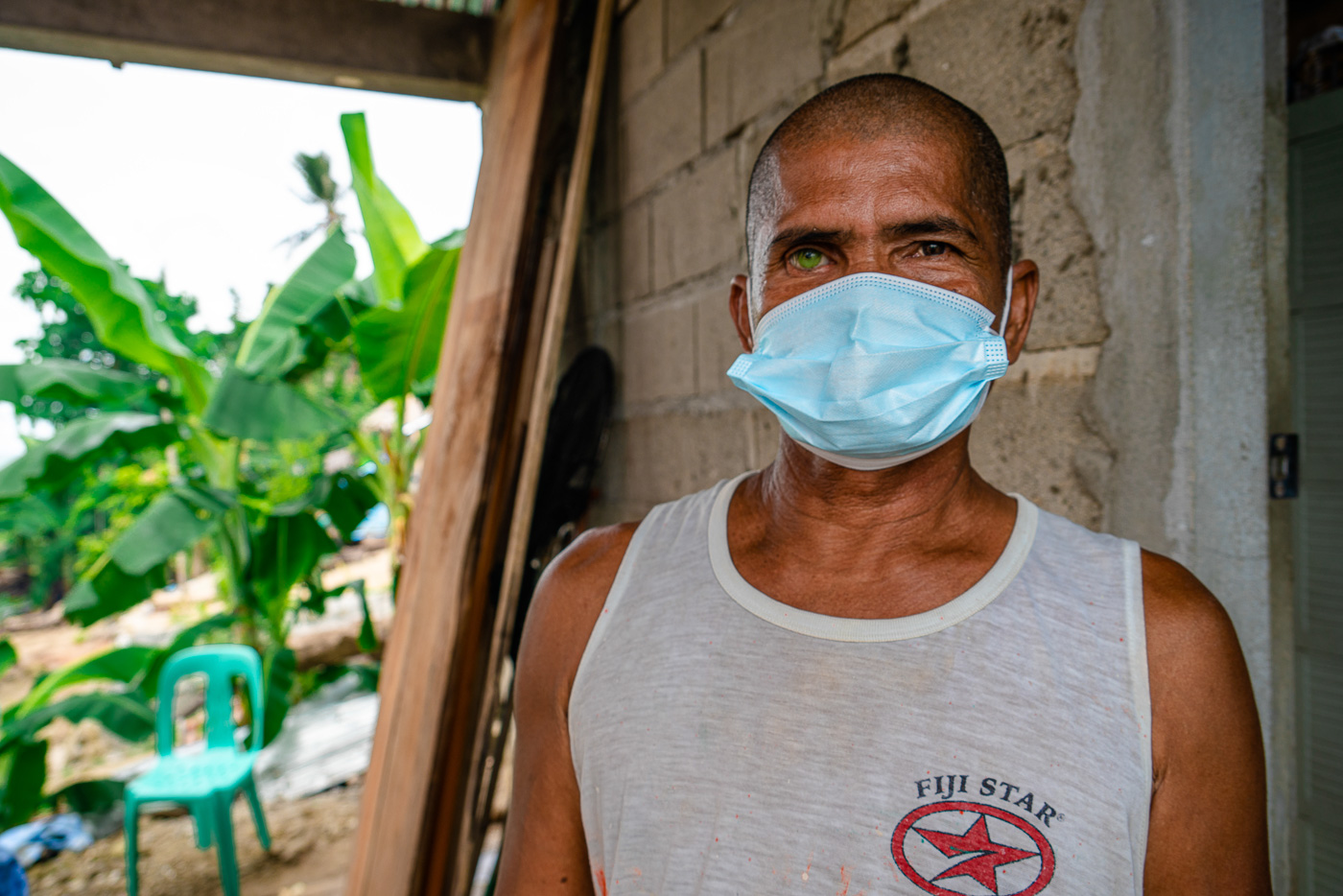 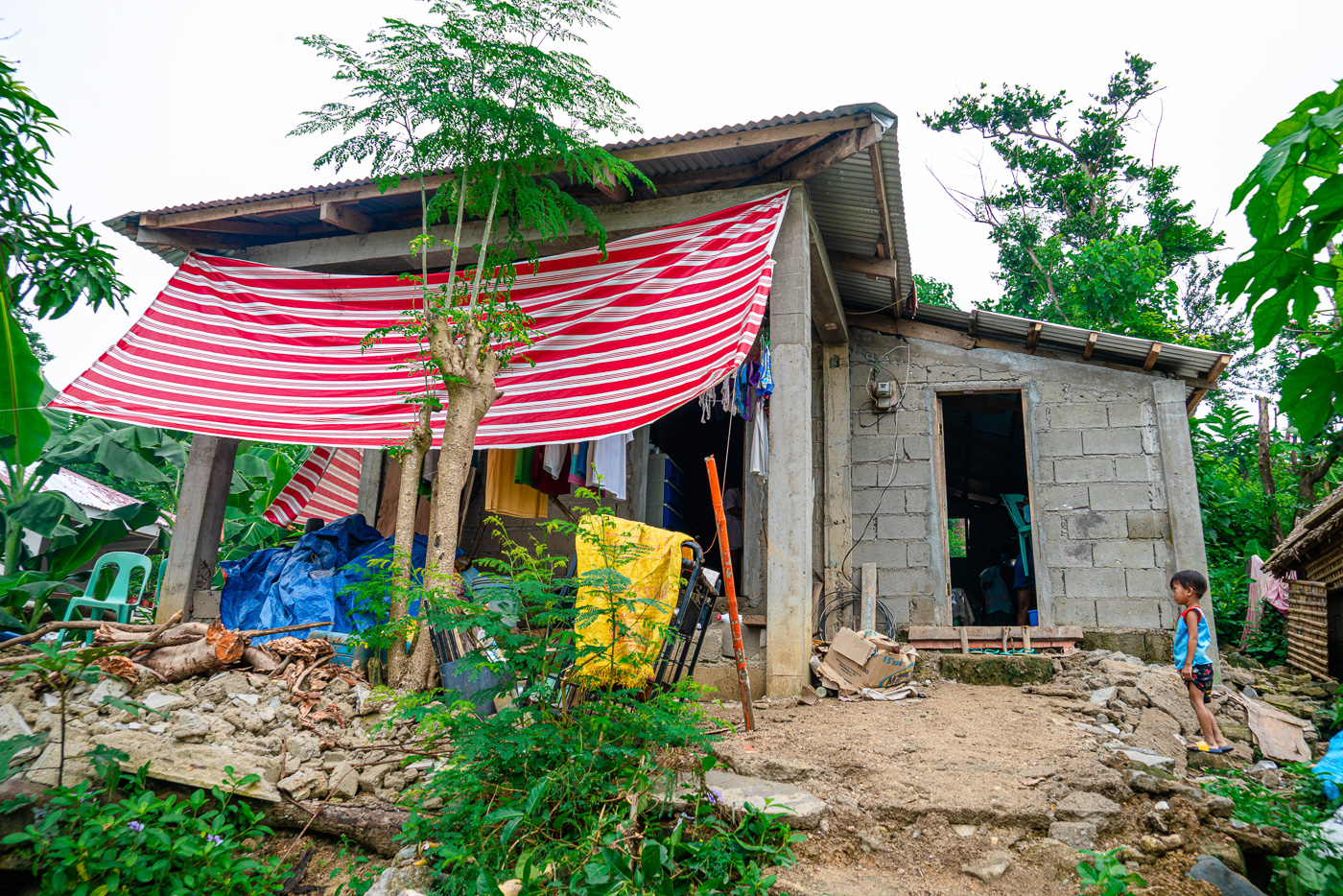 Federico was able to repair his home with support from IOM, after being provided with shelter repair kits and cash assistance. Photo: IOM/ Andrea Empamano

The typhoon ripped half of the roof off his home.

“We’re used to storms, but this one was really strong; the water level went all the way up from the shoreline to our house. We were scared but we couldn’t really do anything but wait it out,” he said.

“We’re poor and we get by with whatever small earnings we get every day. After the storm, our local leaders started looking into families to be prioritized for assistance and I was one of them. I was so happy when I found out because it meant I could repair my house.”

His neighbours helped carry home the supplies and repair the structure as his leg had just been operated on and Federico couldn’t carry heavy materials.

“I was so thankful because they not only gave us quality materials, but the engineers also taught us how to repair our homes properly. Life has been difficult but I’m still thankful that we’ve received help that helped us get back on our feet,” he said.

Julieta, Herlyn and Federico's experiences are three among hundreds on the island of Rawis alone where people are highly dependent on the environment for their livelihood, relying on coastal fishing, seaweed farming and mangrove lumber to sustain their families.

Typhoon Rolly and three other typhoons pounded the region within a span of three weeks in 2020, halting, if not totally obliterating, the livelihoods of the island-barangay’s residents.

It is the farmers, fisherfolk and people living on the coastlines who are facing the worst impacts of climate change, both slow-onset and sudden-onset events, such as heatwaves, flooding, strong winds and rising sea levels. The poorest communities – often those who do not directly contribute to climate change – are the most vulnerable to its effects.

To better understand climate change and its impact on migration in the local context, the International Organization for Migration (IOM) in the Philippines talked to local governments and vulnerable communities. People from coastal towns and cities say they observed an increase in the intensity of typhoons as well as rising sea levels, forcing people living in residential zones and buffer zones to move further inland.

Their narratives are supported by scientific studies showing that extreme weather events are expected to become more frequent and more intense with climate change. 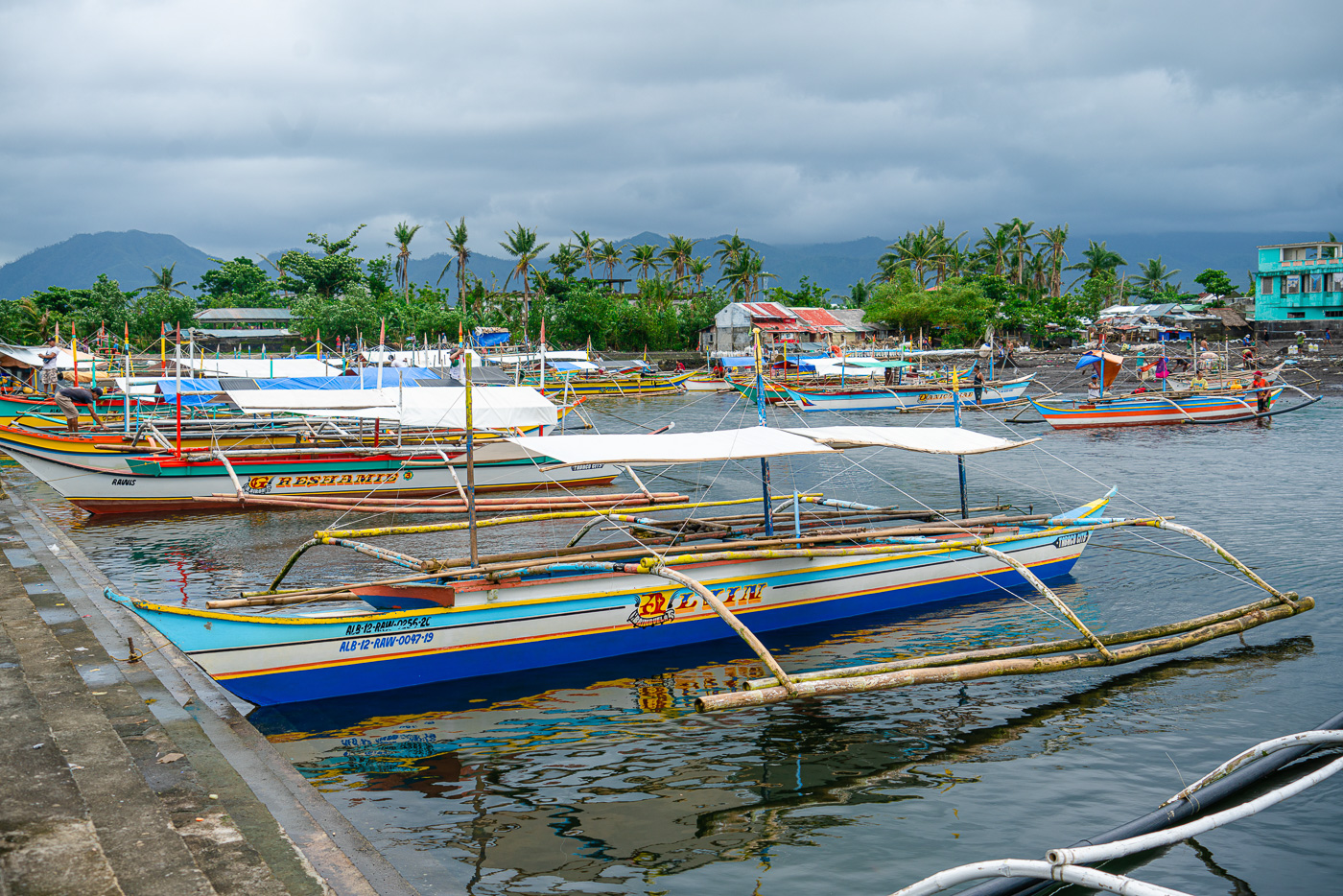 The Philippines faces more typhoons than any other country in the world: roughly half of the 20 that emerge in the region every year will cut across the archipelago. It constantly ranks among the most at-risk countries due to climate change despite its small contribution to its causes, and is the second-most affected by events of weather-related loss according to data from the Climate Risk Index (CRI) 2020.

Such conditions drive migration decisions of Filipinos. In 2020 alone, the Philippines witnessed 4.4 million people newly displaced by disasters inside their country, according to the Internal Displacement Monitoring Centre. This is the second largest figure for 2020 at the global level, only trumped by China. But this is not a new trend. The Philippines has been ranking first or second at the global level on the number of persons affected by internal disaster displacement in the last 5 years, with 4.1 million in 2019, 3.8 million in 2018, 2.5 million in 2017, and 2.6 million in 2016.

The residents of Rawis and the rest of the province have a reputation for grit in the face of adversity and an ability to recover from the super typhoons in the past. 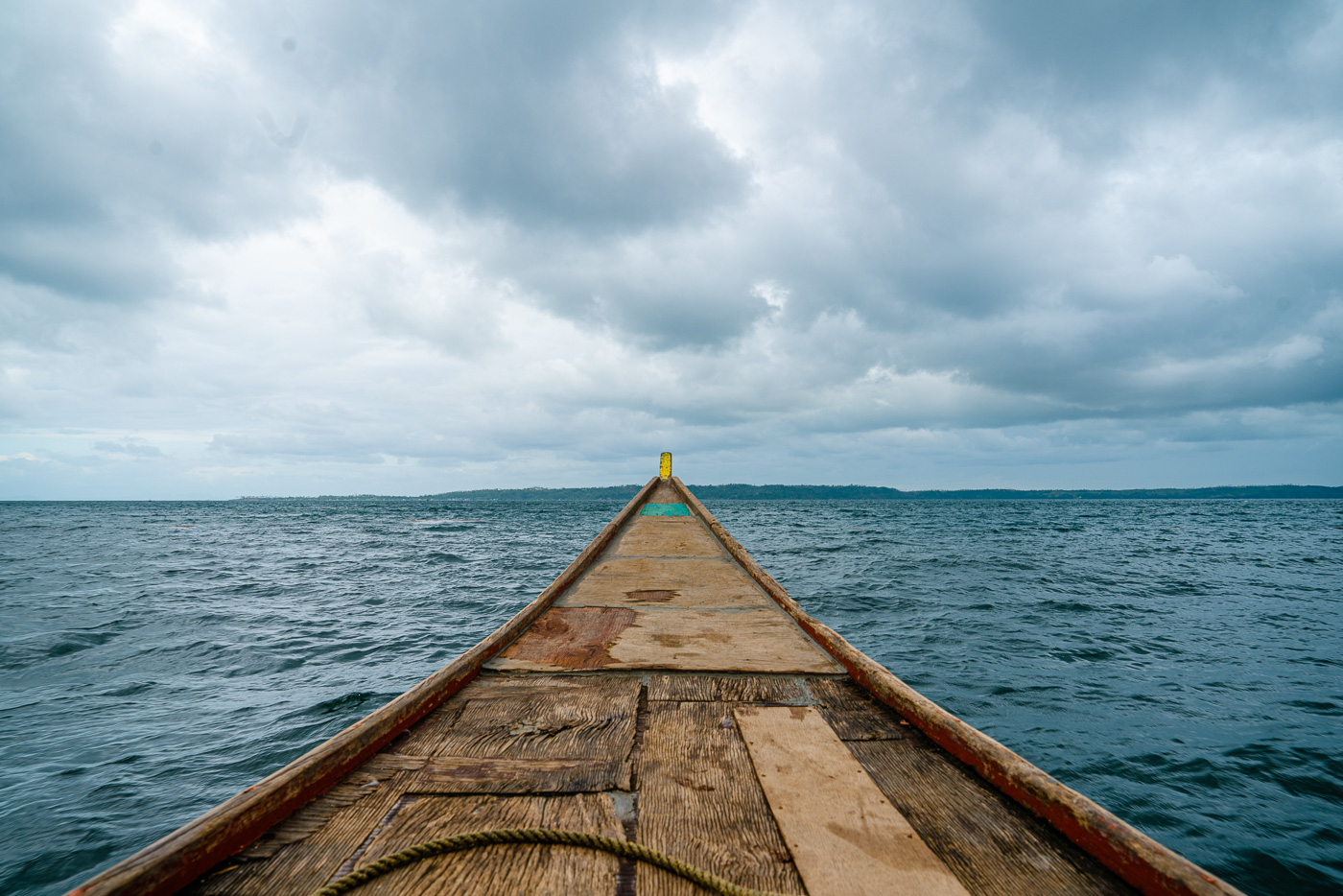 "If another storm comes, we will survive that too," is the response when asked what they will do in the future.

Local authorities in the Philippines are institutionalizing climate change adaptation and preparedness programmes to prepare for climate change impacts and their effects on migration, but the question still remains: are we doing enough to ensure our communities are resilient?

Help IOM continue to provide assistance to migrants, refugees and host communities for a sustainable future, and increase their resilience to future disasters.