Marib – Hosting over 5,000 families, Al Jufainah Camp in Marib city is Yemen’s largest displacement site. For many of the camp’s residents, collecting enough water to sustain their families was a daily struggle.  The increasing spread of communicable diseases, like cholera and more recently COVID-19, makes this lack of access to safe water even more dangerous.

“Twelve months ago, most people had to spend a lot of money buying or borrowing water from neighbours,” said Waleed, a displaced person living in Al Jufainah Camp, who worked as a water point monitor with the International Organization for Migration (IOM). 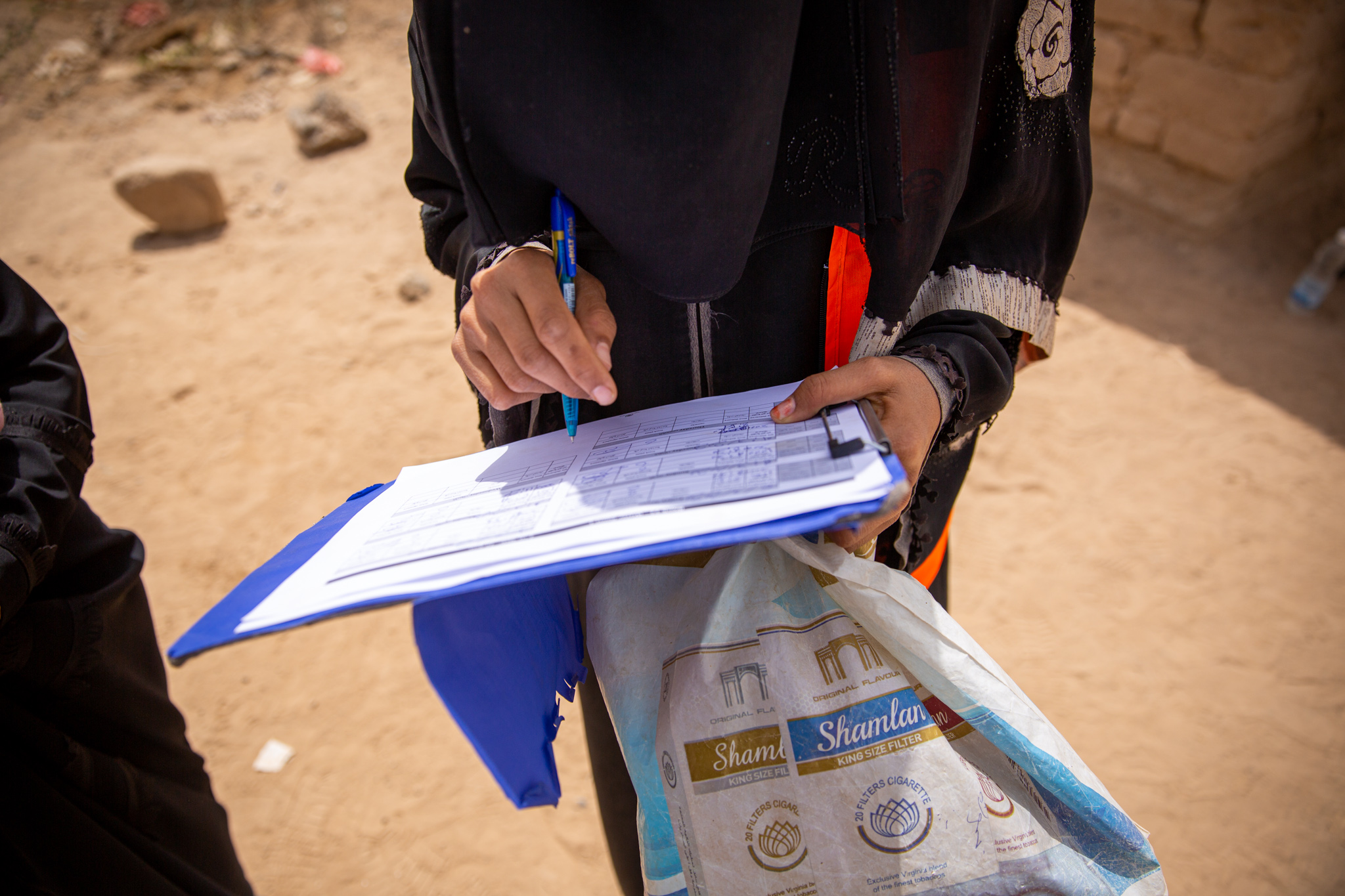 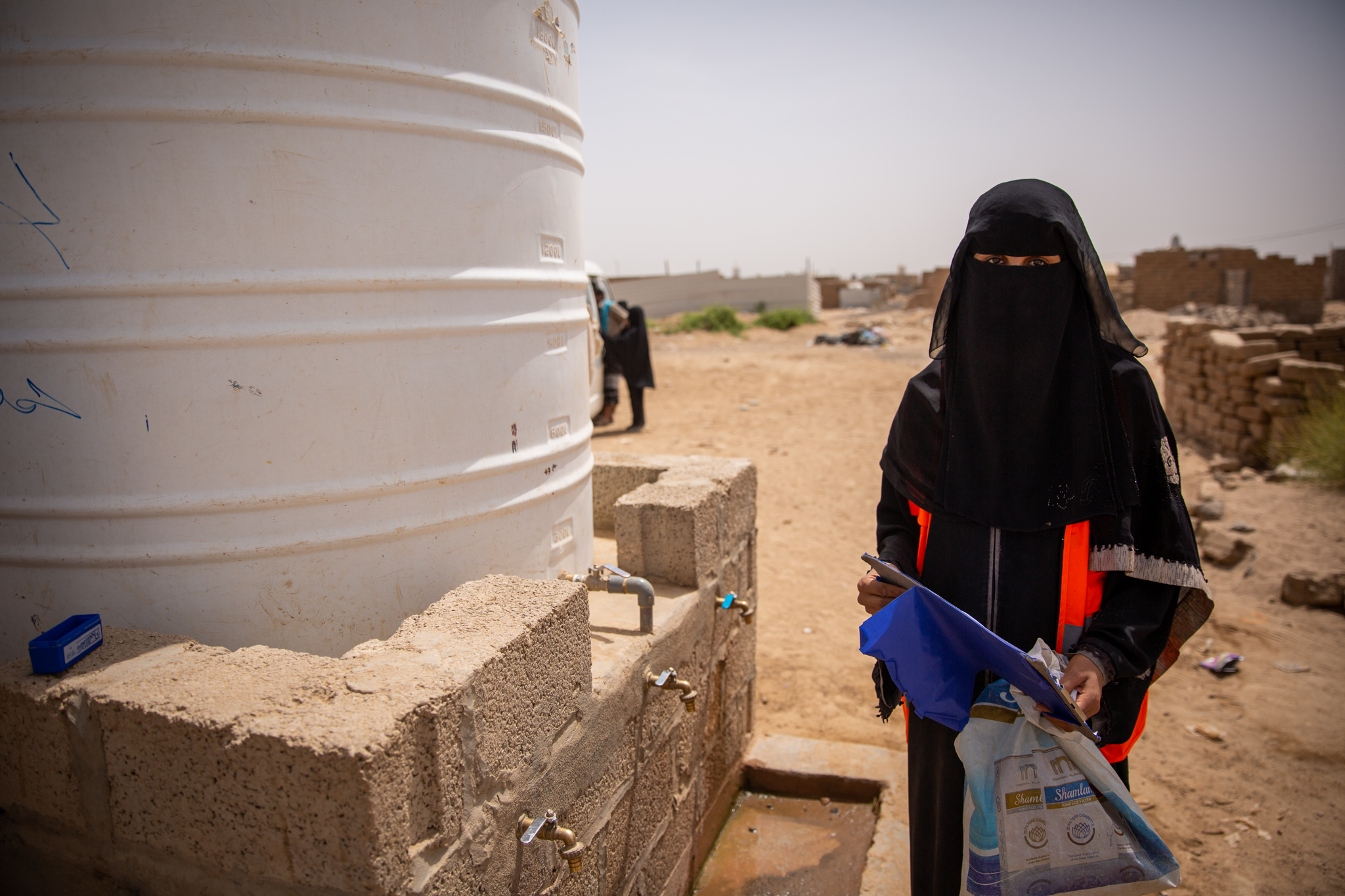 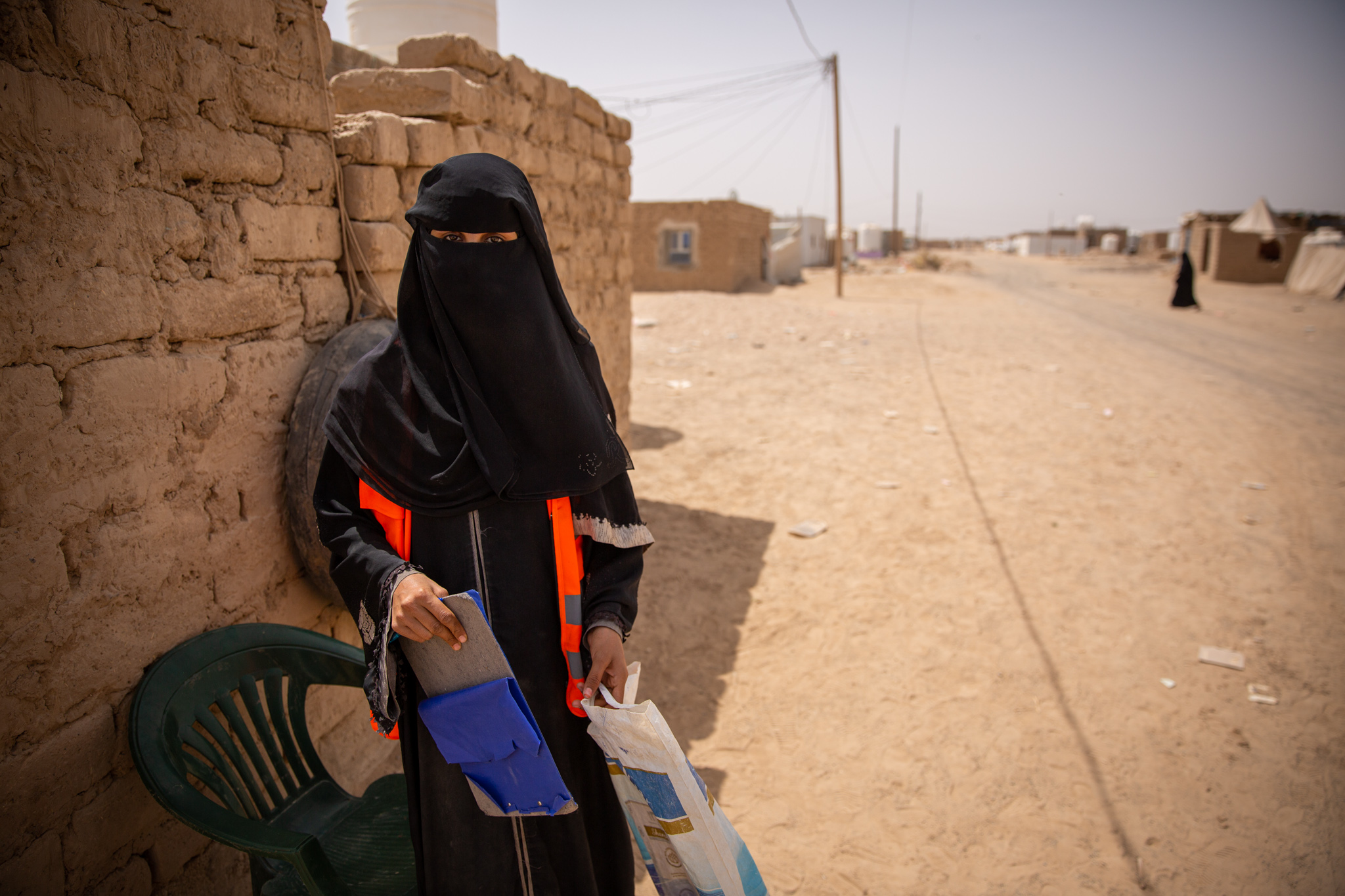 European Union Humanitarian Aid partnered with IOM to improve water access in Al Jufainah Camp. IOM worked side by side with camp representatives to develop a plan for emergency water trucking and to establish 27 water points bringing chlorinated water that’s safe for drinking and handwashing to over 4,000 displaced families in the camp. 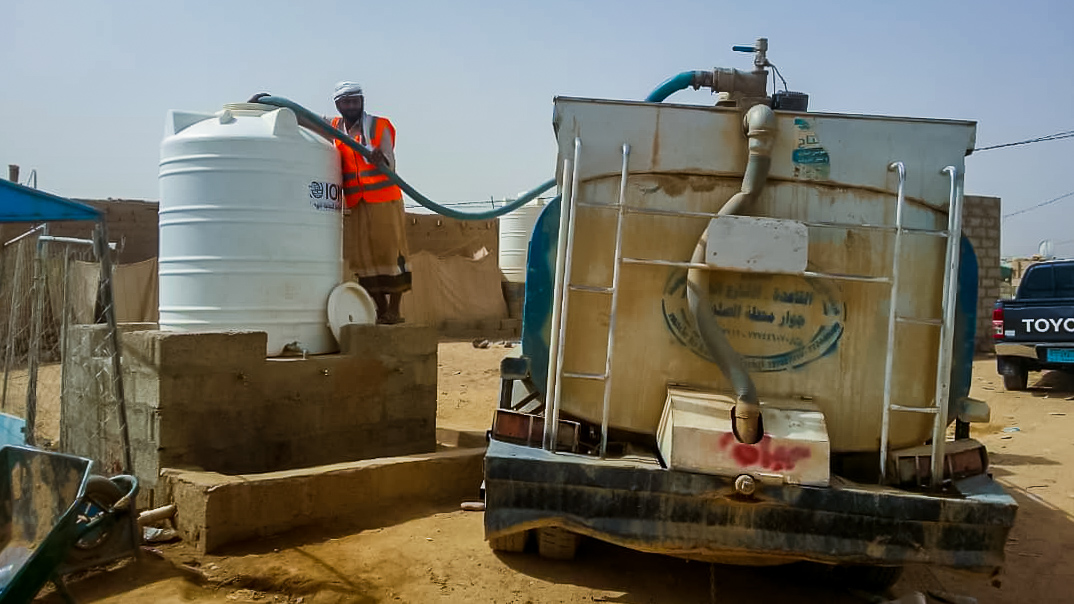 New water points and water delivery is not where the support stopped. To keep the water points filled and functioning, IOM’s water and sanitation team in Marib trained over 80 camp residents as water point monitors — some of whom were given future training as hygiene promoters to raise awareness among their neighbours on how to effectively combat COVID-19 and cholera. 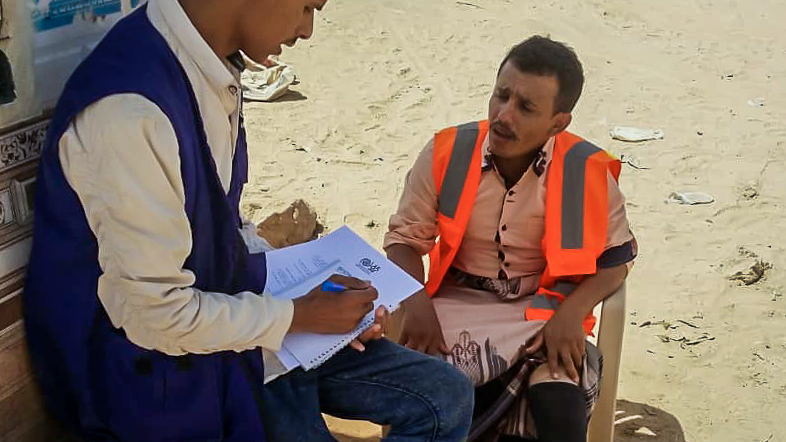 Waleed (quoted in story) working with the IOM WASH team

Waleed was one of the key members of the water point monitoring team. Originally from Raymah governorate, he fled with his family to Marib city at the start of the conflict. Soon after, he was injured and lost his left leg. Unable to work, he could no longer afford to rent a house in Marib city, so he had to move with his wife and six children to Al Jufainah Camp.

“I was asked to supervise and record the water trucking times, the amount of water delivered, clean the tank and make sure that no one is wasting water,” Waleed explained.

Waleed used his first salary payment to cover his septic tank, as he had been worried that one of his children might fall in while playing.

Norah worked alongside Waleed on the water monitoring point team. When she fled with her family from Ibb to Marib, her husband’s heart condition worsened, and he was no longer able to work. Norah became the sole breadwinner of their small family. 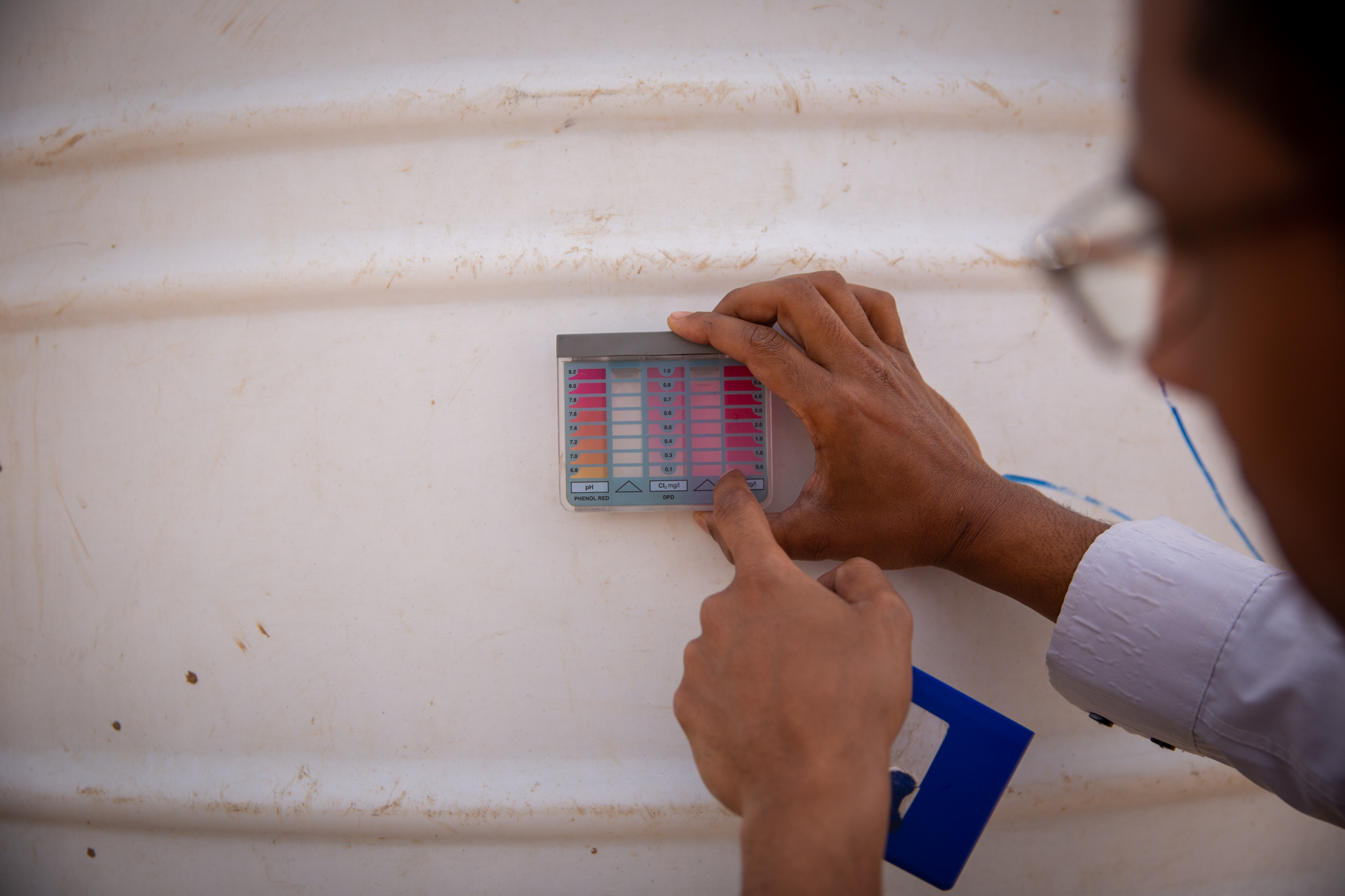 For the eight months until they could afford their own shelter, Norah and Rashad lived with their five-year-old son in her brother’s kitchen. The tent they live in today still does not provide adequate protection from the wind, rain and cold, but at least it gives the family a bit more privacy and space.

Her position as a water point monitor also allowed Norah to pay her debts, buy food for her family and send medicine to her father who is sick and still living in Ibb. She also had better access to water thanks to the tanks that she monitored.

“We used to struggle a lot to find drinking water. The water tanks in the Camp would be empty for weeks, without a single drop of water. IOM provides us with enough water and is helping improve the overall hygiene of the camp,” said Norah. 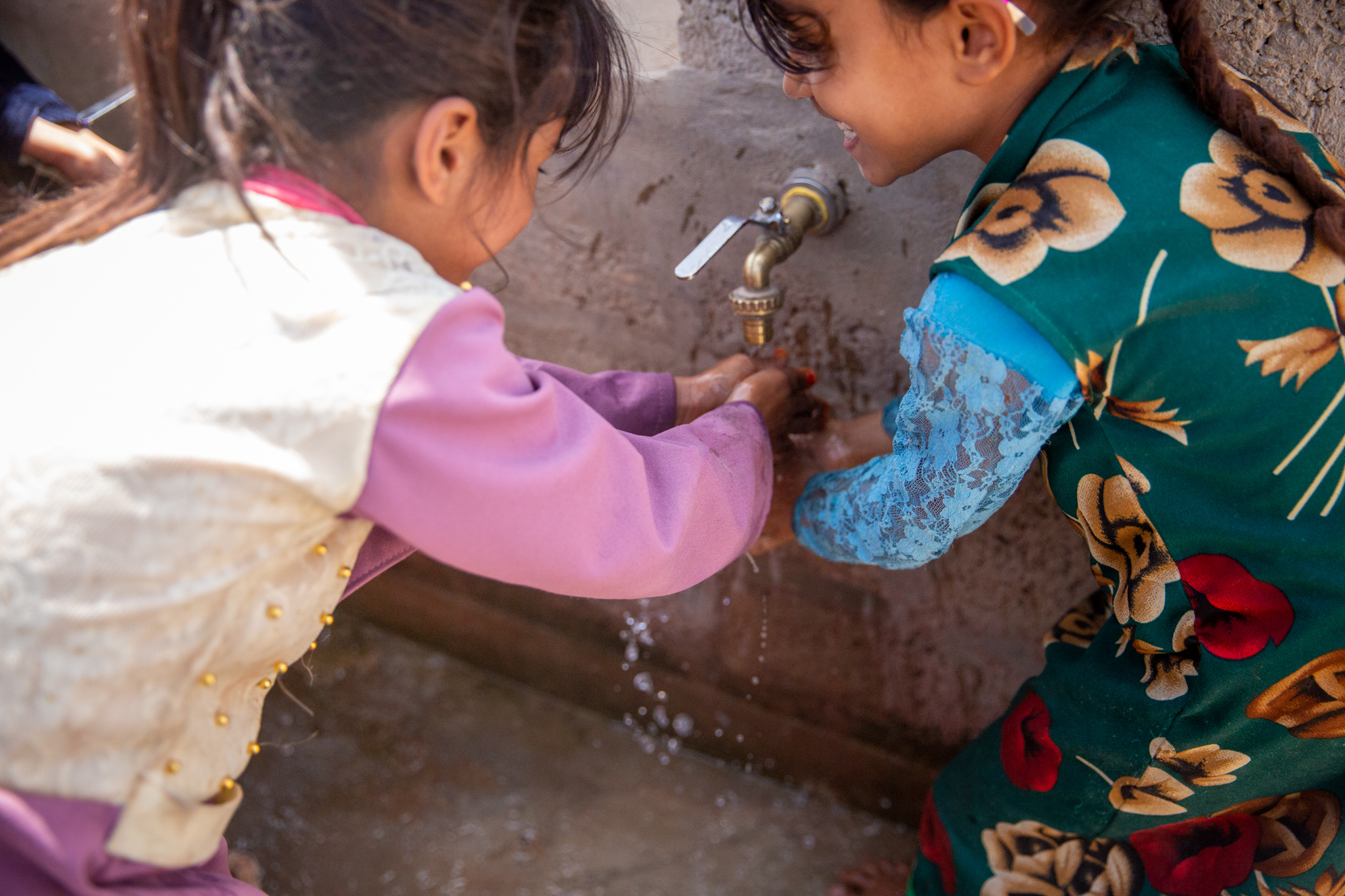 Children washing their hands at an IOM water point

Apart from the daily water trucking, EU humanitarian support also meant that IOM could increase handwashing facilities and COVID-19 and cholera awareness materials and build a flood prevention wall in the camp to help the displaced residents keep safe from heavy rains and flooding.

Al Jufainah Camp hosts other vulnerable groups, in addition to displaced people, like a group often referred to as the Muhamasheen, which translated from Arabic means the marginalized.

Saboolah is a member of that community.

“When my husband died, I had to raise seven children alone -- the oldest child is just thirteen,” said Saboolah, who has lived her whole life in the area that grew into Al Jufainah Camp since the conflict began. 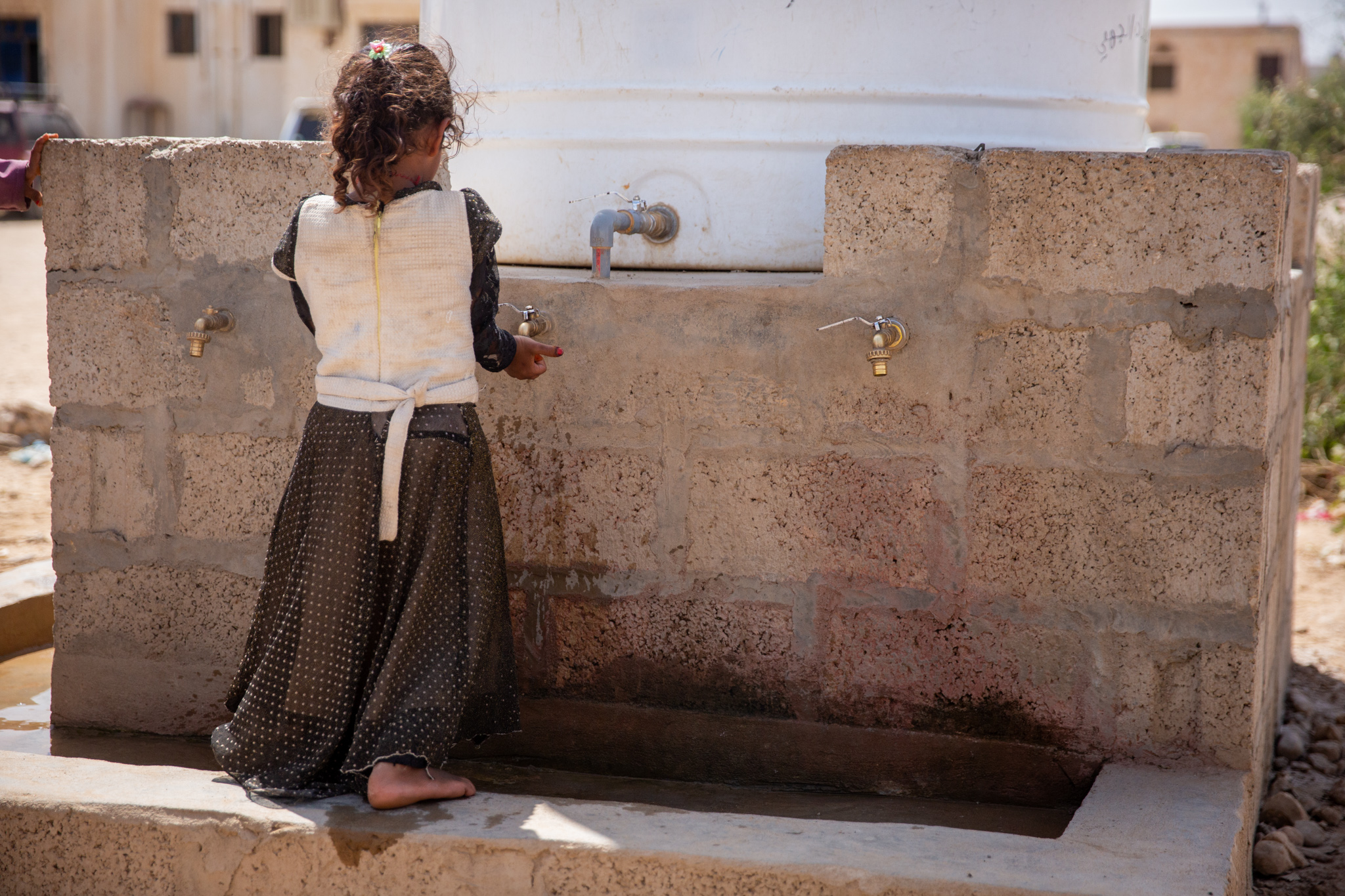 A child washing her hands at an IOM water point

Saboolah still hopes that she can receive more support to help her raise her young family. 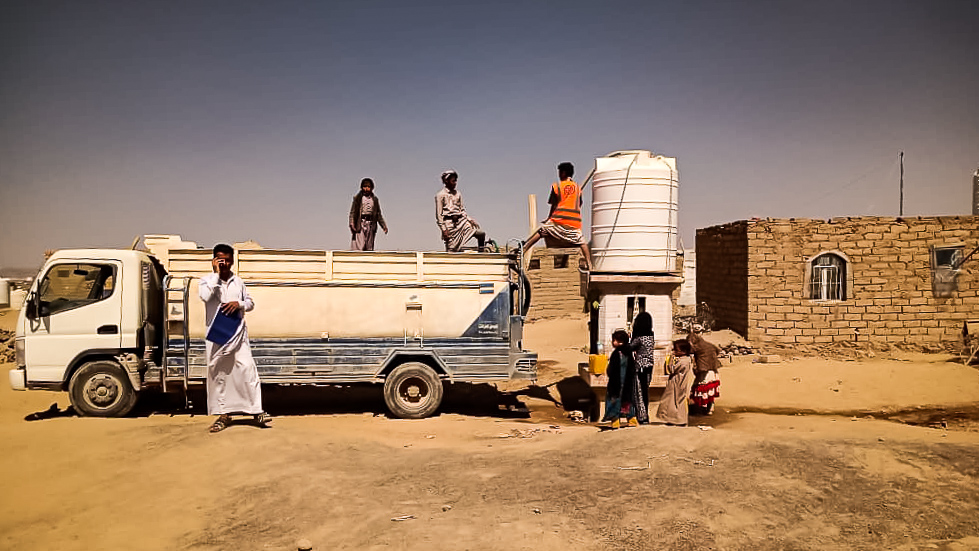 Last month, having set up the water points and build local capacity in the displacement camp to monitor the points, IOM handed back this water supply role to local authorities. During the EU supported initiative, IOM’s water and sanitation team conducted regular visits to the points were monitored by Saboolah, Norah, Waleed and their colleagues; working with them to test the water quality and make sure they have safe and drinkable water.

This story was written by IOM Yemen’s Mennatallah Homaid and edited by Olivia Headon.