Thousands of people are still displaced from their volcanic island home in Papua New Guinea,

a dozen years since the last eruption.

Somewhere in the Bismarck Sea, off the coast of Papua New Guinea, the Indo-Australian and the Pacific tectonic plates collide with violent force creating a fracture all the way down through the crust and into the molten core of the Earth.

"This is where I am right now", writes George Gigauri, IOM Chief of Mission in Papua New Guinea. "I am in the belly of the beast, slap-bang in the circle of highest volcanic and seismic activity along the rim of the Pacific Ocean, known as the ‘Ring of Fire’."

Legend has it that in times long past a dog deity brought fire and smoke to Manam island and breathed life into the rock. With new life came two spirits that occupied the island – Jaria the female, and Yabu the male. To this day they keep harmony on the island and protect the folk that dwell on the surface.

The two craters of Manam volcano carry the names of the two spirits and, they say, whenever the people anger them, fire comes spewing out as punishment. The island of the same name is located across the Stephan Strait on the north coast of mainland Madang Province of Papua New Guinea, and hosts one of the world’s most active volcanoes.

Following the last major eruptions in 1996 and 2004 over 9,000 inhabitants had to be evacuated, as ash and debris took lives, incinerated houses, and destroyed livelihoods. Most islanders were resettled along the mainland of Madang province: first in emergency shelters and subsequently in informal settlements: so-called ‘care centres’, where they languish, still desperately trying to build a new life for themselves.

However, to this day no sustainable solution has been found for these internally displaced persons (IDPs), as they struggle to gain access to land, legalize their property, and find income opportunities. Tensions with host communities remain high, often leading to conflict as they compete for scarce resources. Over the past decade more than 2,700 IDPs have had to return to Manam, fleeing a cycle of violence.

IOM was asked by the Government to assist in stabilizing the IDP and host communities as well as supporting the longer term resettlement process, and we’re on our way to evaluate the work done so far. 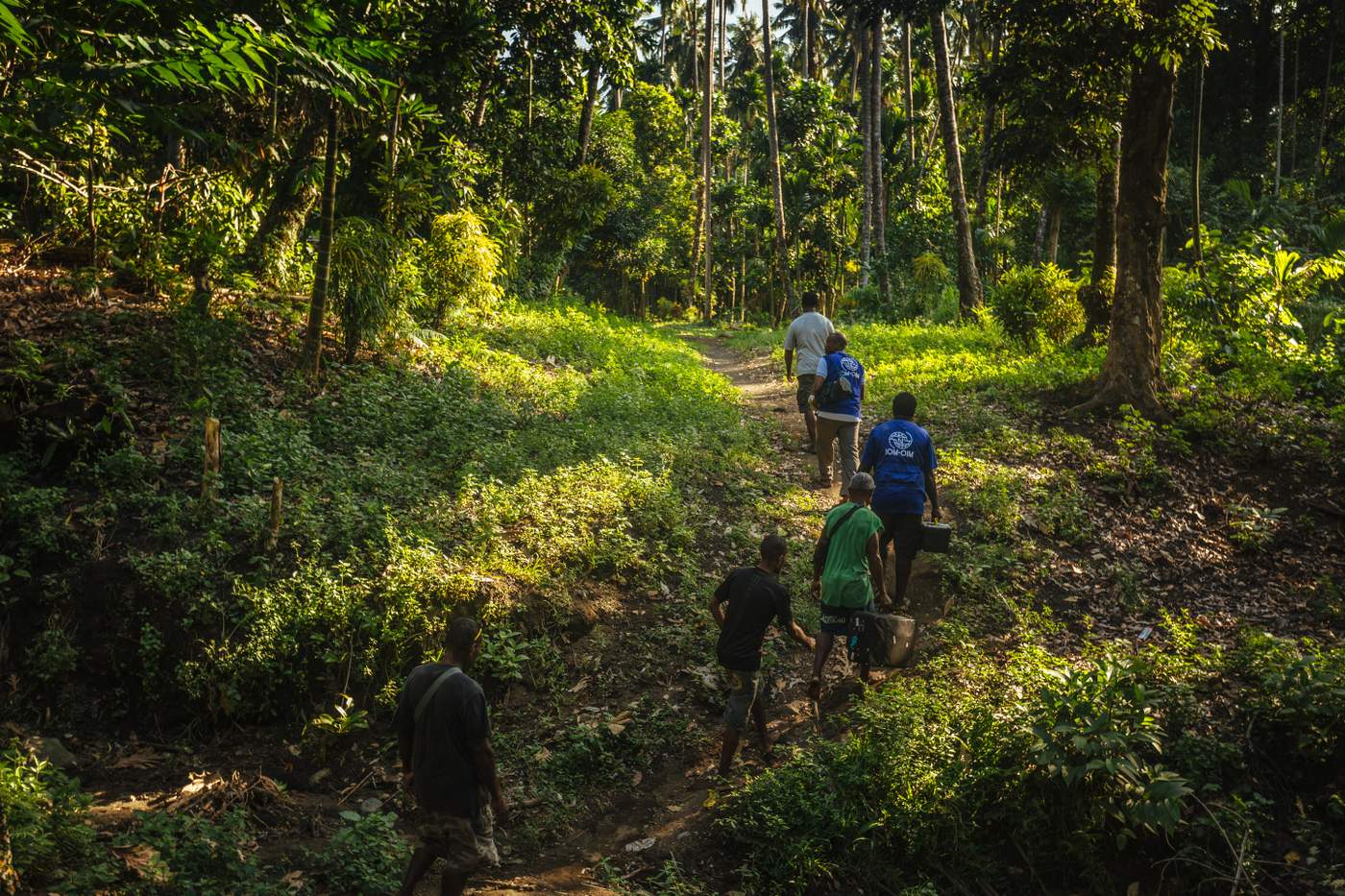 "Meandering through the jungle"

After five hours of meandering through the jungle we arrive at the northern tip of the Bogia district, from there onto a dingy and across the strait towards the imposing volcano. Some of those evacuated after previous eruptions have returned to their island home and our first stop is the returnee community on Manam Island itself. As we get closer,the smoke emanating from the mountain becomes ever more imposing and the lava path, from previous eruptions, looks as if a dragon has burnt a black trail from the summit down to the shore. As we circumnavigate the landmass, we pass a corroded barge washed up on the beach, which looks strikingly out of place. ‘This is a ghost ship’, the skipper answers our curious glances, ‘it floated in from the ocean one day, and there was no one on it’. 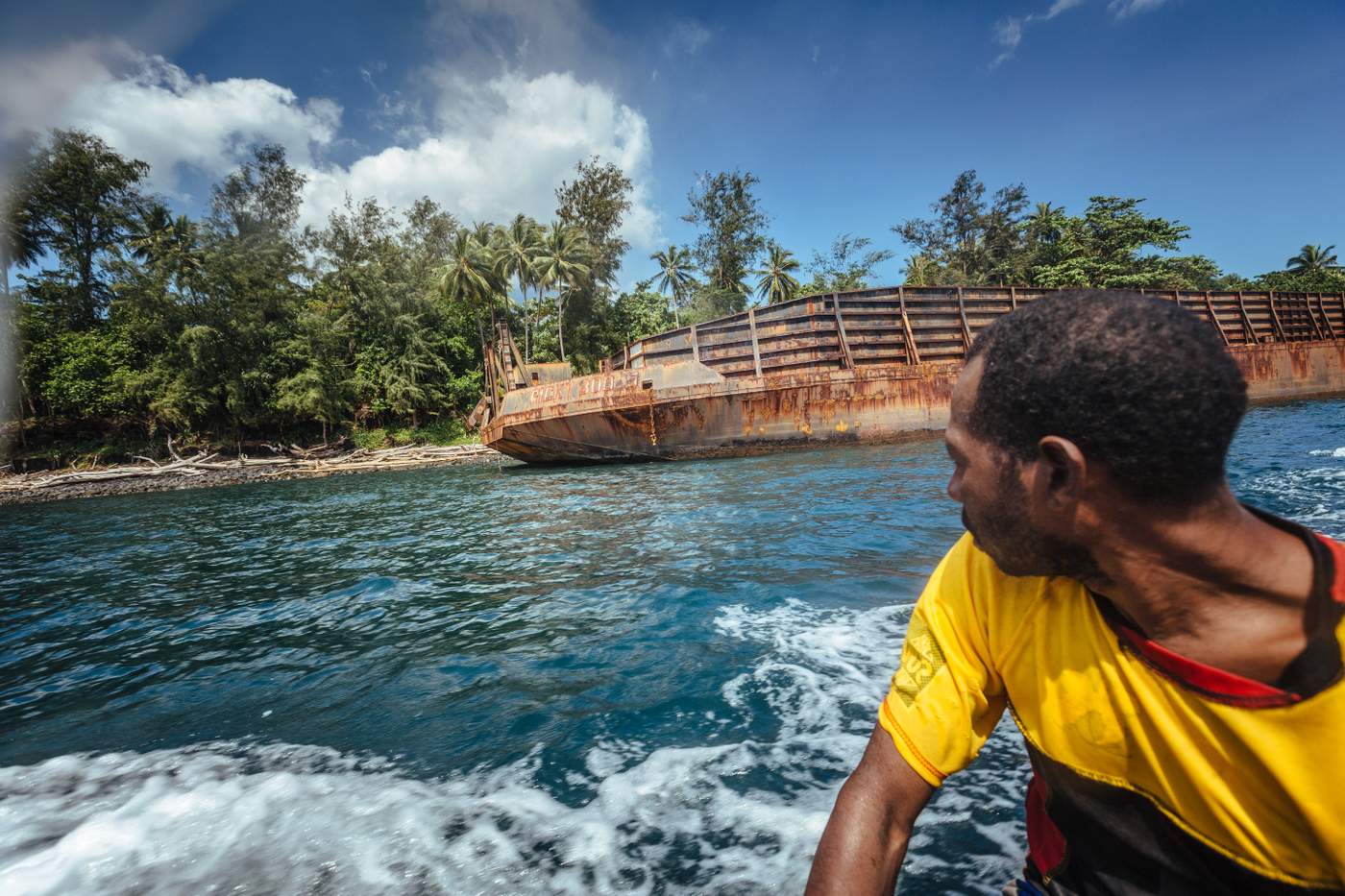 We disembark and the community greets us with real warmth. The people are very much aware of the mortal danger beneath them, but at least there is no threat of violence here. ‘I’d rather die from the volcano than from a bush knife of those (mainland) tribes’, the Kukurai (Chief) Caspar tells me. Despite their hardship I find incredible strength of spirit among these people and a determination to protect their heritage. We cannot force them to relocate, so our approach to this group is to continue raising awareness on the hazard and duly prepare them for mass evacuation, whenever it may happen. 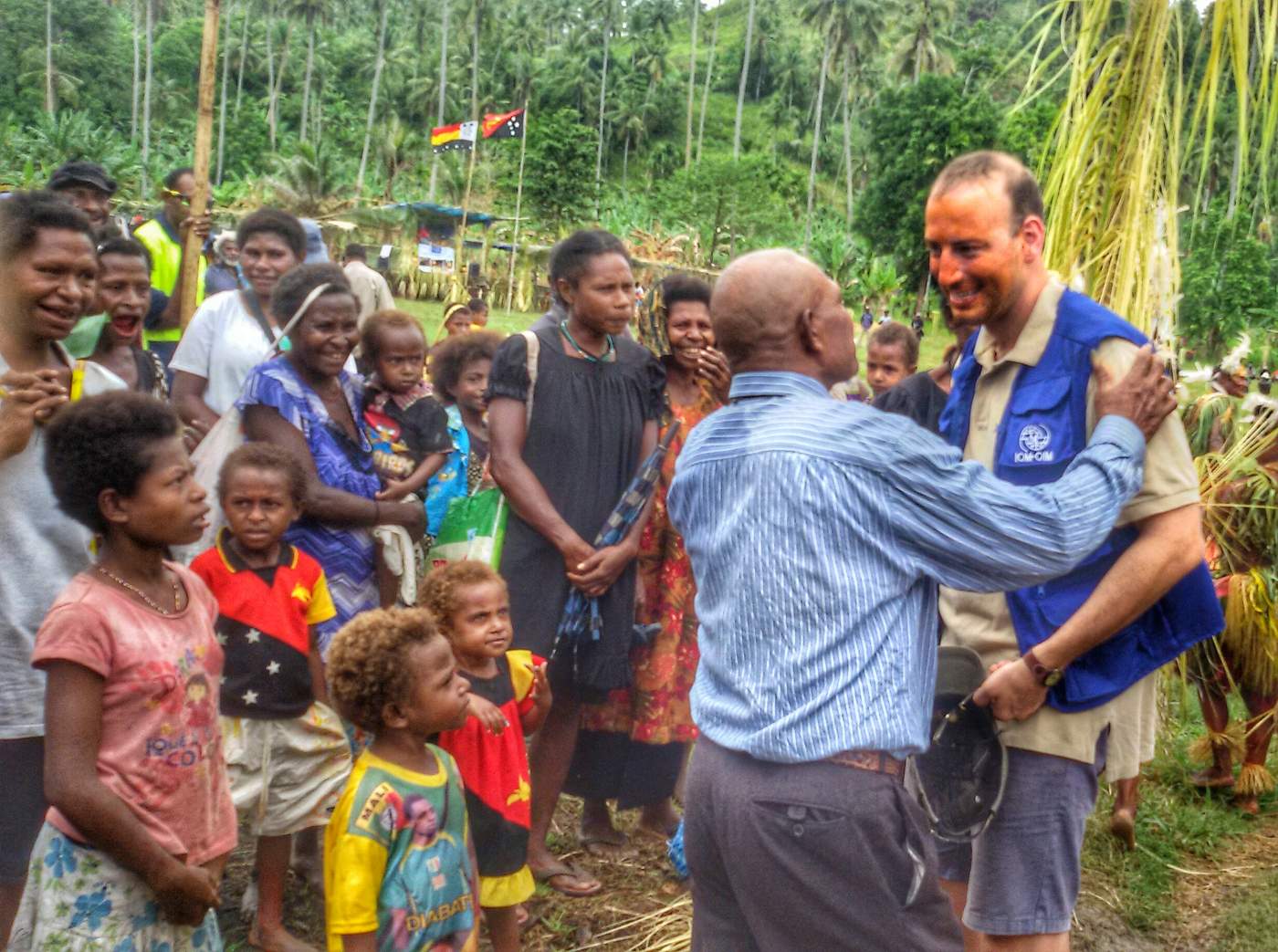 A warm welcome on a volcanic island

‘This is the first time, as far as I can remember, that someone has sat us (the displaced and host communities) down at one table and allowed us to speak and to listen to each other’, Gande confides. He's the Chief of a host village with a violent past of cohabitation with displaced people

Our conversation is interrupted by a loud beating of the communal drum, meaning a ceremony is about to start. Today is the launch of development plans that are designed to build peace and bring together the displaced and host communities.

It's part of an inclusive process that IOM has been facilitating. It aims to mitigate conflict and unite the tribes through joint development initiatives and give a voice to every man, woman and child.

I observe with fascination as thousands of people from host and IDP communities gather in one field to proudly present their achievements and express their struggles. This event of reconciliation and commitment to development slowly begins to resemble a mass psycho-social therapy session, as leaders present paintings and stories that portray their tribe’s hardships.

One banner shows mourning for the families that perished, another – a sense of anxiety and longing to return to the island, one more depicts resilience through pain and tribulation. A different poster catches my eye, it displays a dog with ‘IOM’ inscribed on it pulling a man out of a snake’s coiled grasp, apparently an indigenous interpretation of our training on breaking the poverty cycle.

‘You,IOM, you givim hope’, a little albino girl stutters in broken English. I begin to realize that we’re witnessing something extraordinary and find it hard to hold back emotions.

As we bid our farewells, I feel humbled by the strength of people who have so little but want to do so much. If all else fails, I know that we have helped them,in a small way, to find the power with the tight bonds of their own communities. This is not something which can be planned in a project proposal, or neatly encapsulated in a logframe for a donor: this is something that transcends and stays with you, at the very core of your humanity.

As our convoy takes off, I catch a glimpse of the smoking mountain on the horizon, which suddenly jogs my memory – there is a part of the tale that the Chieftain left out. A little boy whispered it to me afterwards – recently, the mountain has been rumbling again.

The spirits will never rest until the people of mountain fire return.

Scroll down to read about Beverly, a mother with dreams of hope 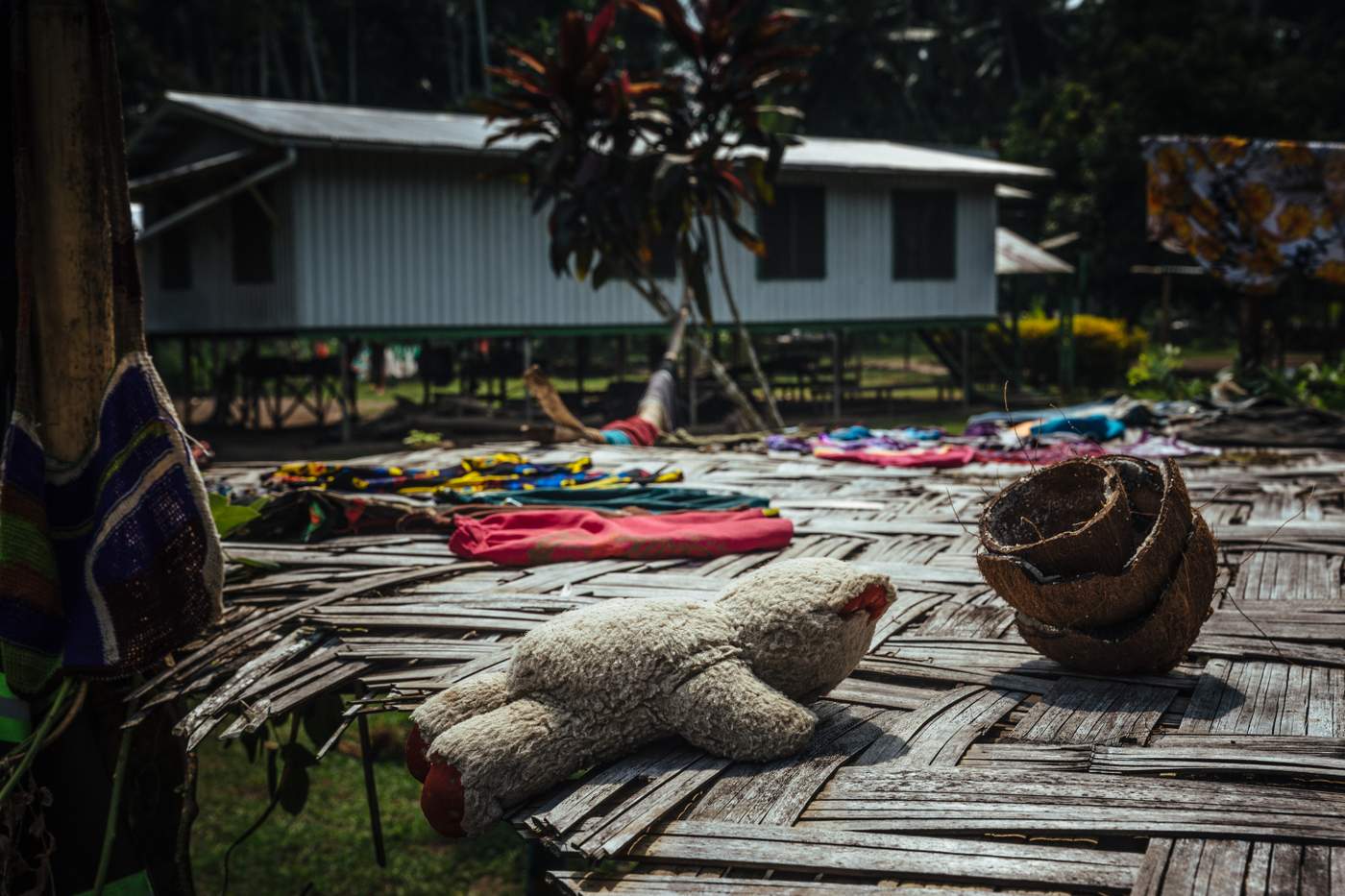 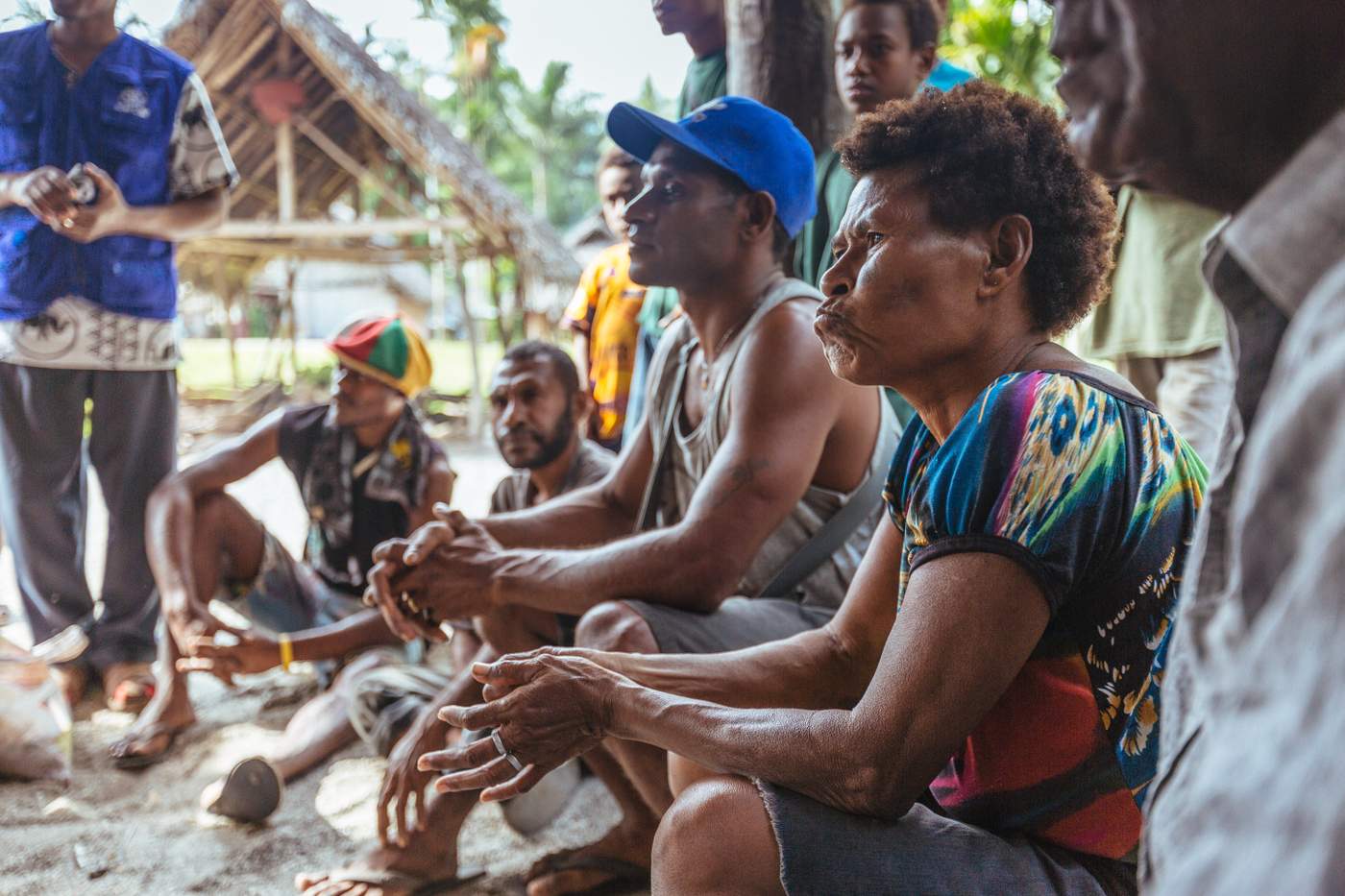 The returnee community on Manam Island 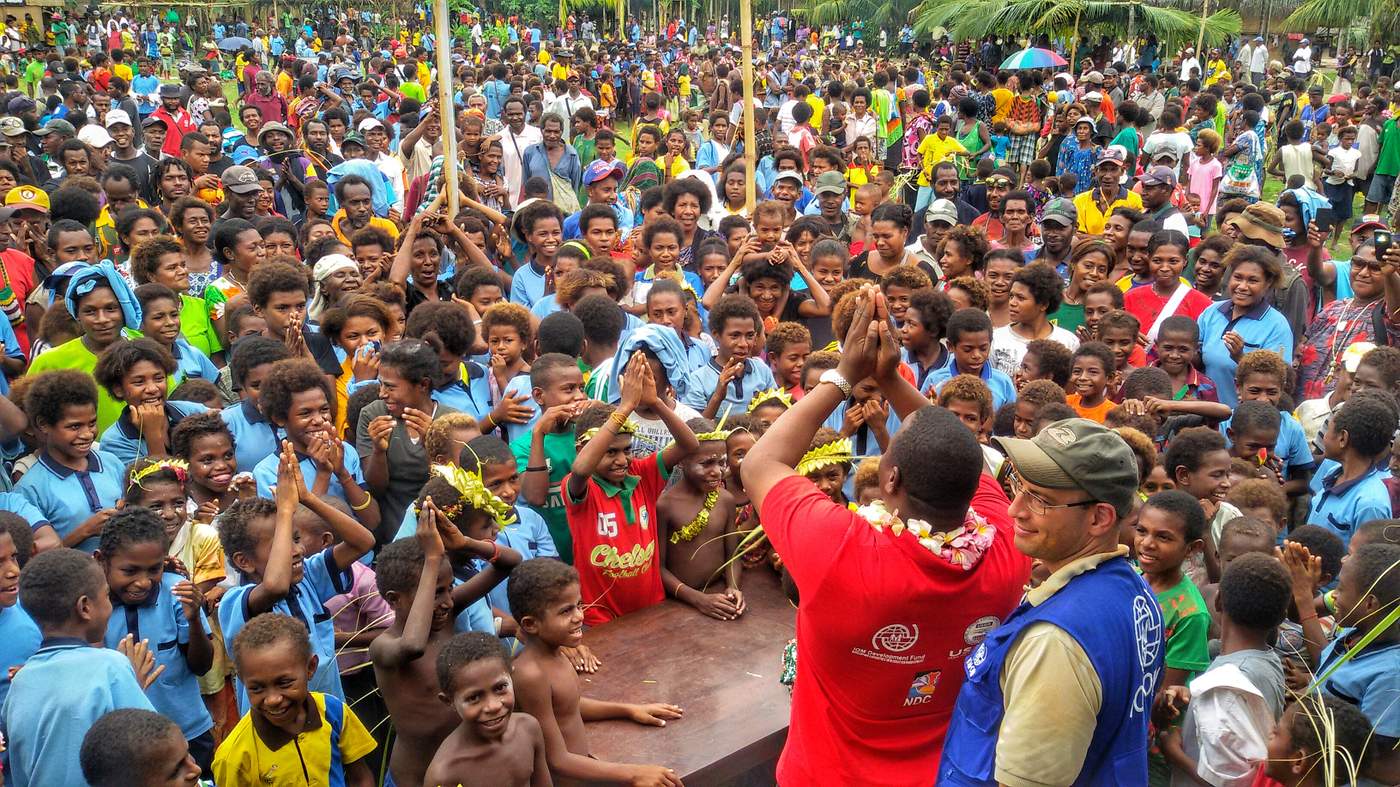 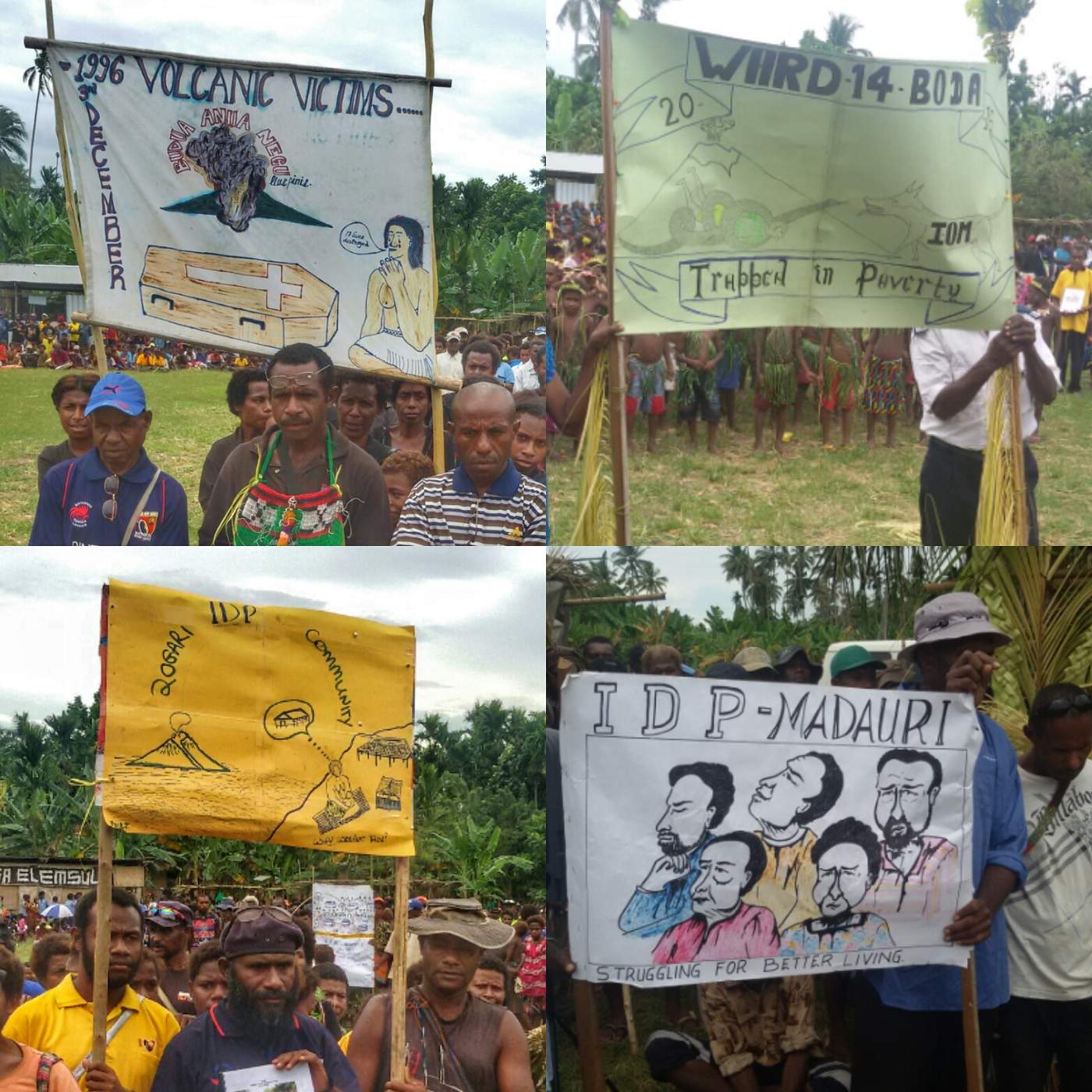 Embracing the Unknown: A Mother's Dream

At first glance, Manam Island seems as if she is in a peaceful slumber. This serene façade is wiped away the moment you reach her shore. For there you will come face to face with rocks that were once magma and the distinct track where the volcano unleashed its wrath, a further emphasis that this island is a harsh place for humans. In late 2004 Manam volcano erupted without a moment’s notice and has since left many Manam Islanders displaced. One cannot imagine their feeling of having to leave their precious home, knowing that returning would be perilous. Sadly, Manam Islanders like Beverly Ururu know this feeling all too well. 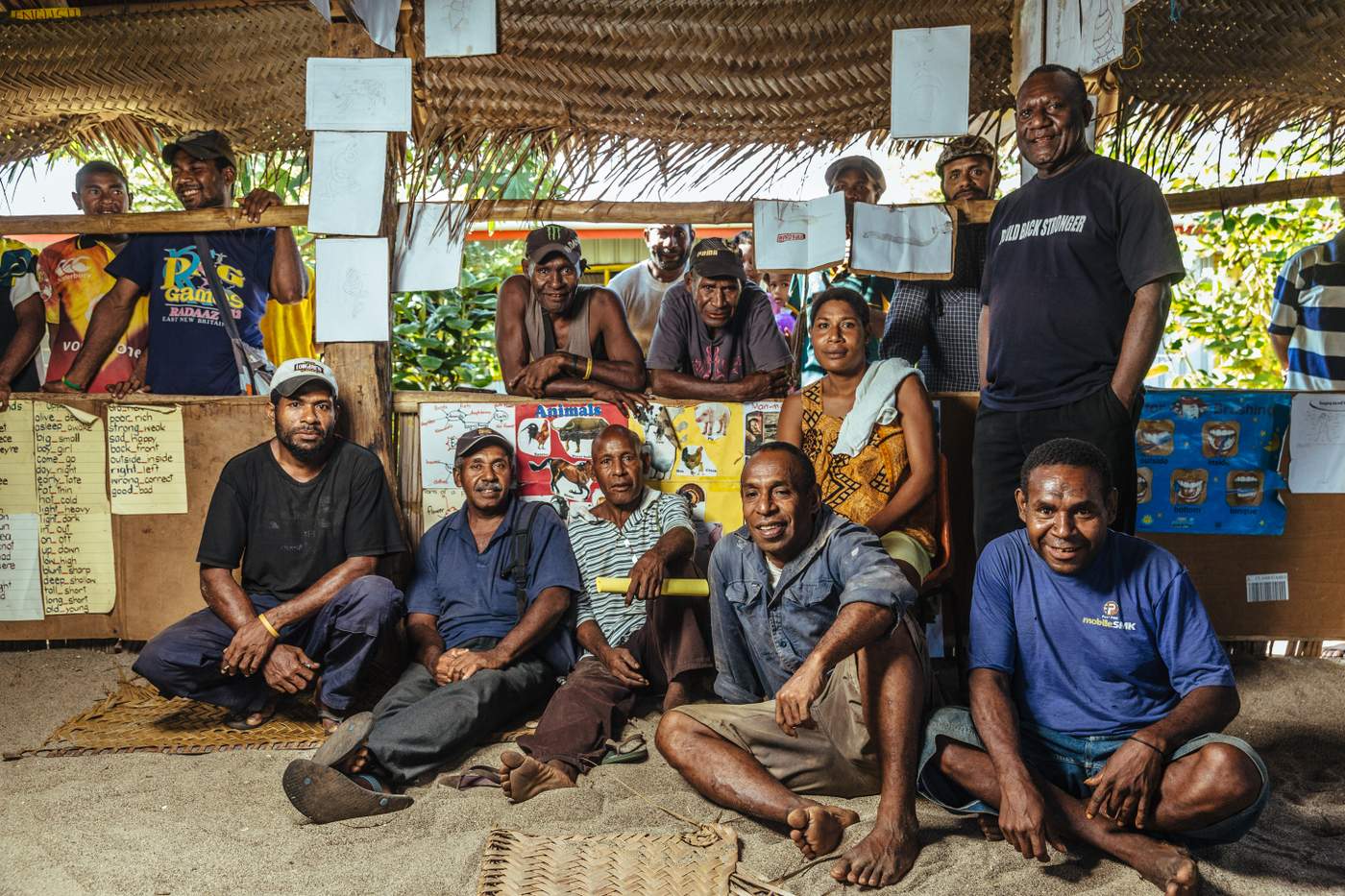 Beverly Ururu and her neighbours demonstrate their community development plans.

Beverly, a 35 year old woman from the village of Dugulaba on Manan Island, vividly remembers leaving the only home she has ever known. Since the eruption in 2004, she and others have been resettled at Mangem Care Centre – one of the three resettlement areas in Bogia for Manam Islanders. For twelve years, internally displaced persons (IDPs) like Beverly have had to rebuild their lives onforeign soil which has resulted in many social and economic issues.

“As a mother, I see that a lot of things are not right. We do not have enough resources to make money because we are living on someone else’s land. Whatever the Government gives to us we make the most of it. But we are pushed to the extreme when we do not have anything at all and that is when we resort to stealing. We are forced to steal in order to survive,” explained Beverly.

Beverly’s sentiments reiterate just how valuable land is to Papua New Guineans. Without land, one cannot support livelihood; land is life. The lack of resources like cocoa and coconut mean that the IDPs will have to search for other income-generating opportunities. Apart from that, there is also the grim reality that the growing population will force the IDPs to look for more land, which is worrisome for mothers like Beverly as it will lead to conflict.

While the uncertainty pains Beverly, she says there is now hope. Since March, the IDP and host communities have been working with IOM to draw up their own community-based development plans. Last week, all their hard work was rewarded with the official signing of these plans by community leaders and the district administrator.

With self-reliance being a key concern among the communities, the development plans take into account community projects that will generate income. They aim to alleviate some of the socio-economic problems faced by the locals and build peace between the IDPs and host community. 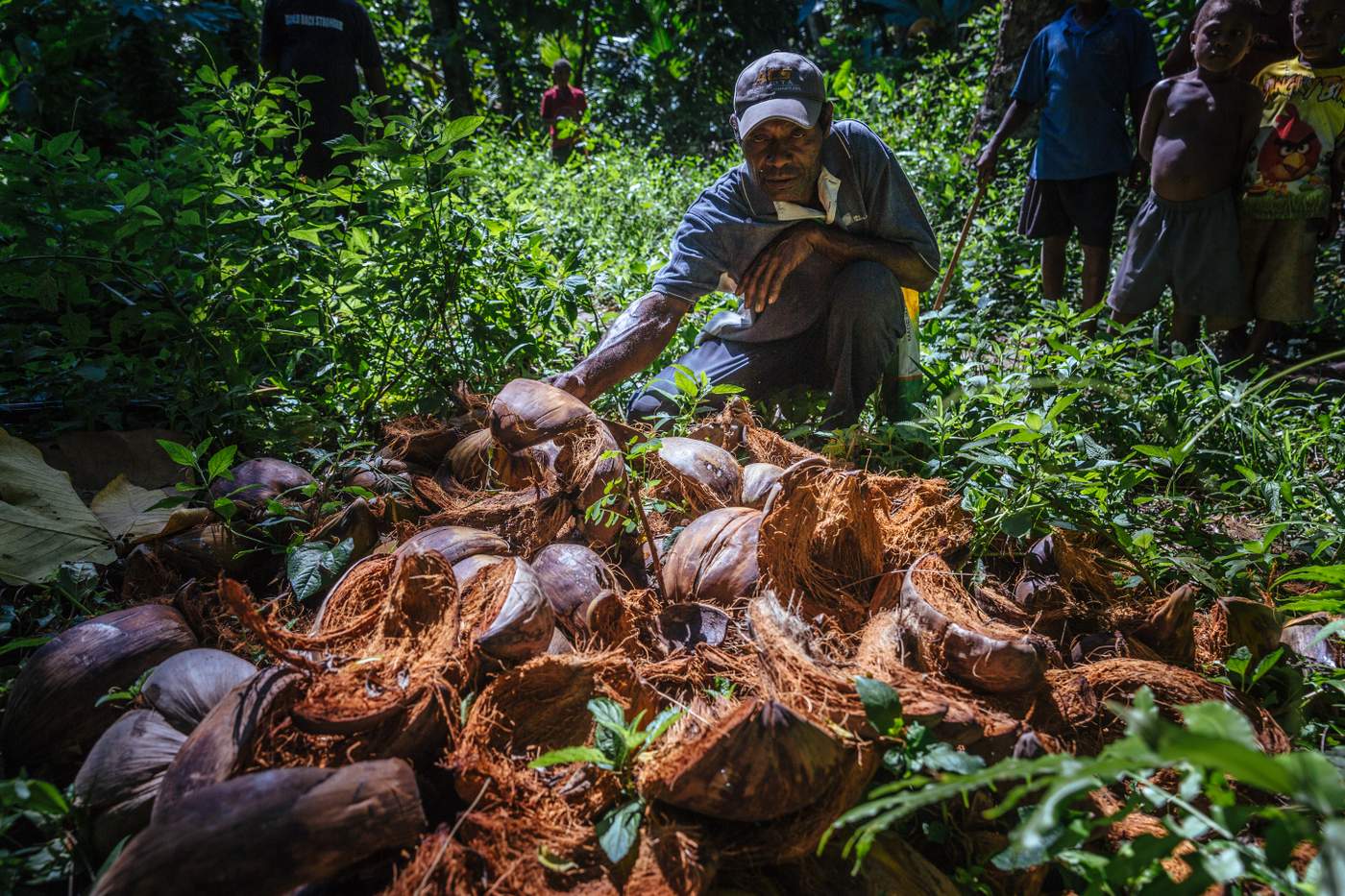 Natural resources like coconuts, a source of food, oil, and material for making rope are very valuable in rural Papua New Guinea. Without proper dispute resolution mechanisms groups can quickly fall into conflict over ownership and access, particularly if one group is displaced.

“My biggest worry was what would happen to my kids. But with this launching, I see IOM as the light at the end of the tunnel. We now have hope that we can move on,”said a joyful Beverly.

Although it is still early stages and the plans have yet to be implemented, it is a step in the right direction for sustainable development. IOM’s complementing of the Government’s efforts to rebuild the lives of Manam IDPs and their host communities is having a ripple effect. No longer is development a form of handout, but rather it is a movement that starts with each person as highlighted by Beverly Ururu. She believes that these plans will not only bring development to her community but empower women like her.

“With our plans I would like to see more mothers involved. When mothers are involved in our projects, we can teach them to be independent and self-reliant. I believe that these plans will empower women. It must happen.”

This Shorthand story was made possible thanks to the generosity of Australian Aid (DFAT), the Madang provincial authorities, village elders, and the people of Manam.