“I used to spend three to four hours a day fetching water, but now I use that time to earn a living to feed my children,” said Saeed, a displaced father of twelve in Taizz governorate, Yemen.

Before the conflict began in 2015, Saeed led a comfortable life. He had an electronics trading business where he would buy electronic devices from Al Nashimah city and sell them in the villages through Taizz. He was able to easily provide for his 12 children. He and his wife even owned two houses in Taizz’s Jabal Habashi district. 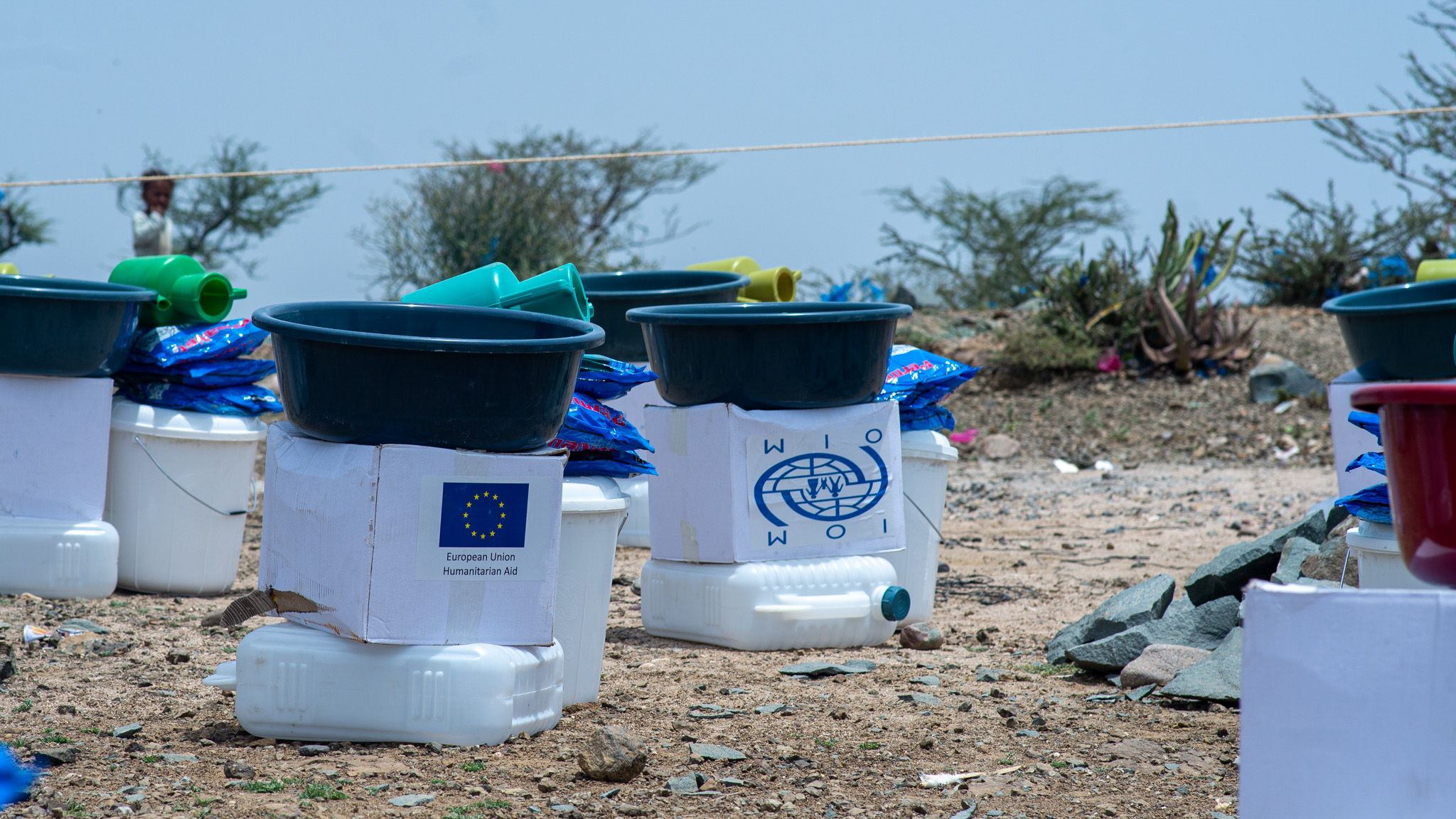 Three years ago, with armed conflict intensified in Jabal Habashi, Saeed made the tough decision that his family should leave their home. Initially, there was nowhere for them to go. But eventually they found safety in the Al Beerain displacement site, also in Taizz, but in a different district.

That site is supported by EU Humanitarian Aid working with the International Organization for Migration (IOM).

Saeed’s story is typical among the tragic pasts of millions of displaced people across Yemen, where lives have been changed forever by six years of conflict.

“We didn’t escape until the houses in our neighborhood started to get damaged by the fighting, so we fled for our lives with nothing. Even our farm animals, which were in the mountains feeding on the day we left, were gone,” Saeed recalled. 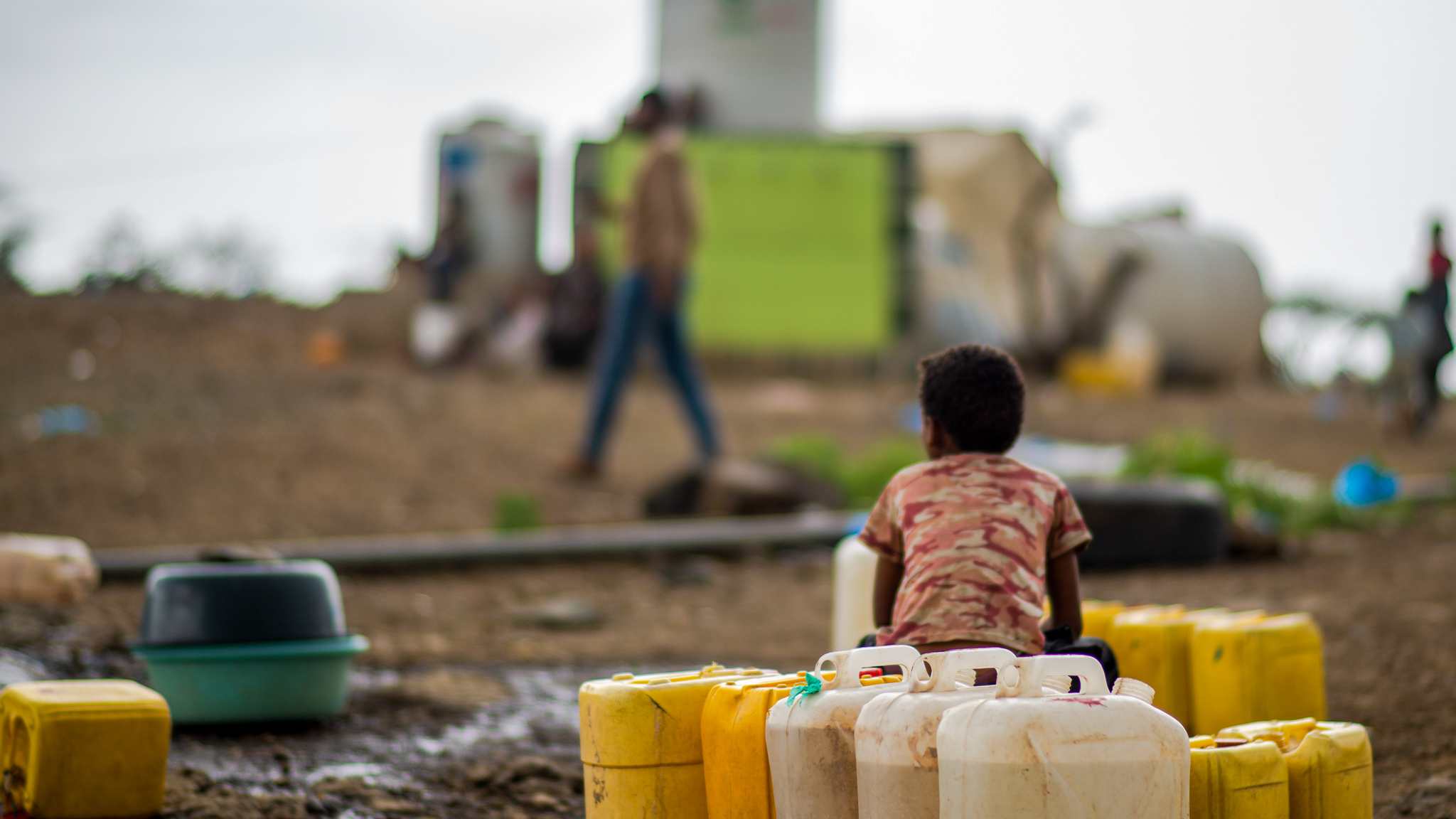 A child after he filled his jerrycans from an IOM-supported water point in a displacement site in Taizz. Picture: R. Ibrahim/ IOM 2020

“We heard a few months later that our houses were completely destroyed.”

After his family arrived in Al Beerain, Saeed was forced to sell his wife’s golden earrings to buy tarpaulins to make a shelter for the large family. He even had to take on some loans

And the roughly-built shelter could not adequately protect them from the sun, rain, wind or cold.

“Our conditions are really bad. We have so many needs and humanitarian organizations cannot support us with everything. If we receive cash for food, we don’t get to buy other things that we need, and if we receive money for clothes, we can’t buy food,” added Saeed, describing the hardship they experience daily. 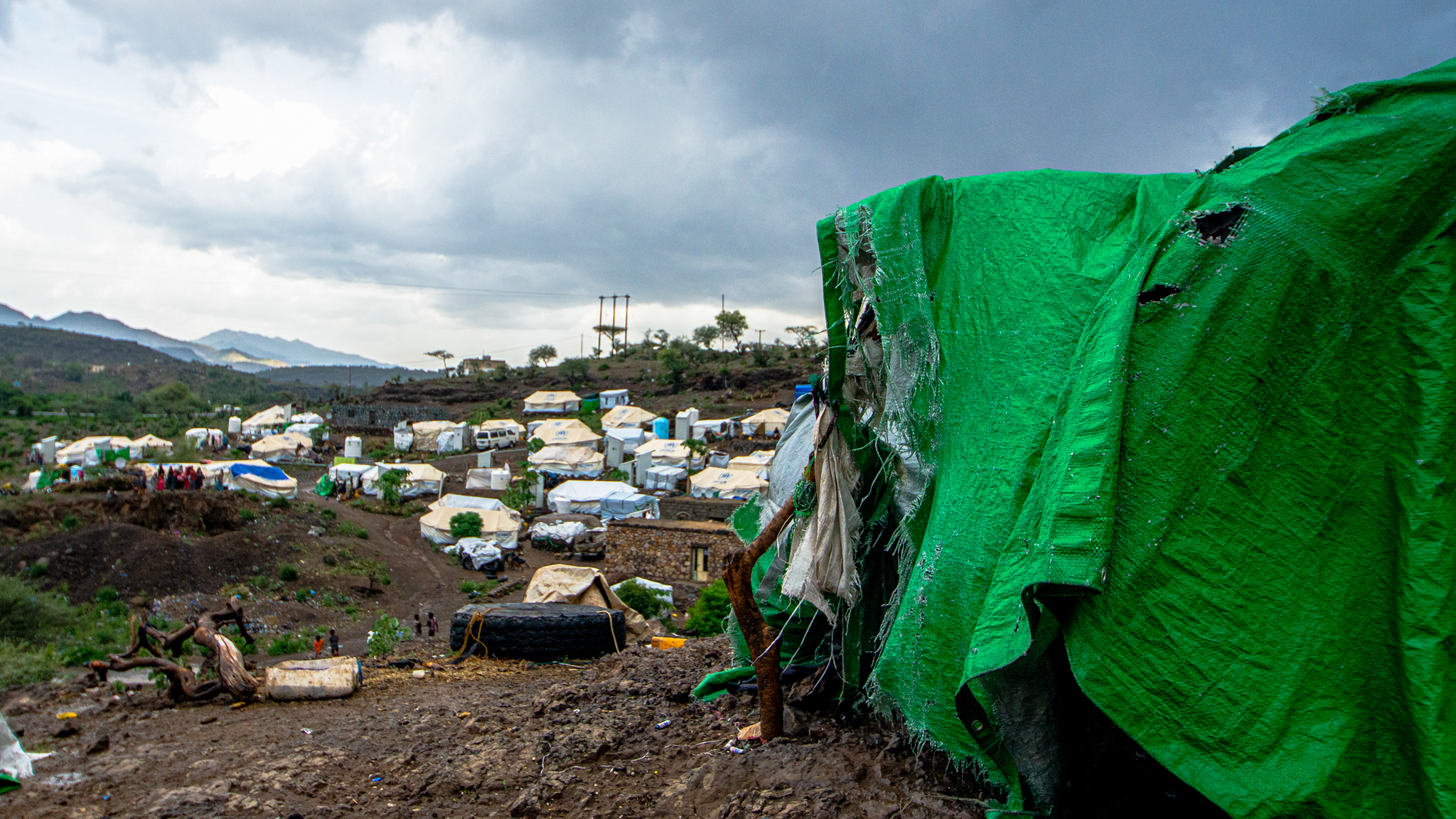 A displacement shelter made of fragile materials in Taizz. Picture: R. Ibrahim/ IOM 2020

Apart from their financial, food and shelter concerns, Saeed’s family and 200 fellow camp residents had almost no access to safe water.

In rural areas, women and children are usually the ones responsible for collecting water, which can expose them to many risks, including of kidnapping or accidents. Sometimes, the community living near the well closest to Al Beerain—a two-hour walk away—would forbid displaced women and children from fetching water, due to its scarcity.

Fearing for their safety, Saeed used to accompany his children on their daily water tasks, watching over them for protection. Typically, this would take several hours each day. Meanwhile the competition for water worsened earlier this year between the locals and displaced people as COVID-19 broke out in Yemen and fears over the virus became widespread. 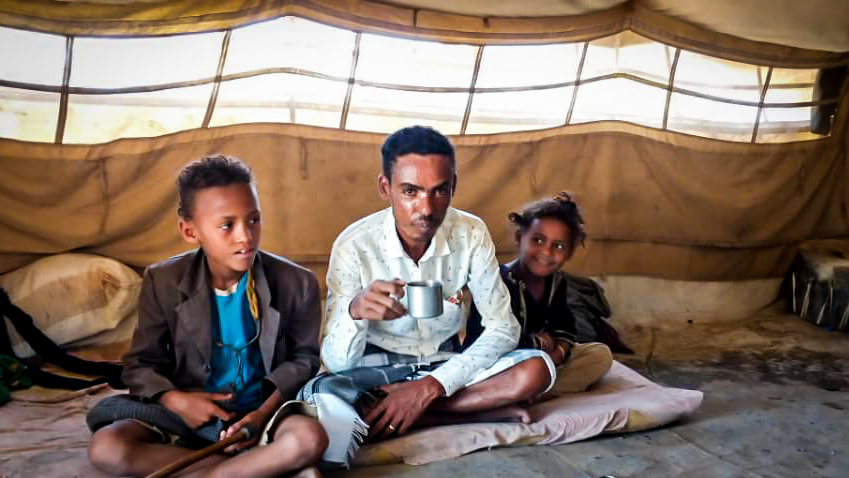 To respond quickly to urgent needs, IOM and EU Humanitarian Aid collaborated to establish seven water points across the Al Beerain site. The partners installed five water tanks for each point, which now deliver more than 25,000 daily, as well as another 20,500 litres of safe “normal use” water for other tasks, like cleaning. Despite the size of the site and the large number of families, IOM worked to ensure each family now has a water point close to its shelter and receives an adequate amount of water. Moreover, IOM’s support also includes the placement of 32 handwashing stations, as a COVID-19 mitigation measure. There are now over 200 household water storage tanks on the site as well. 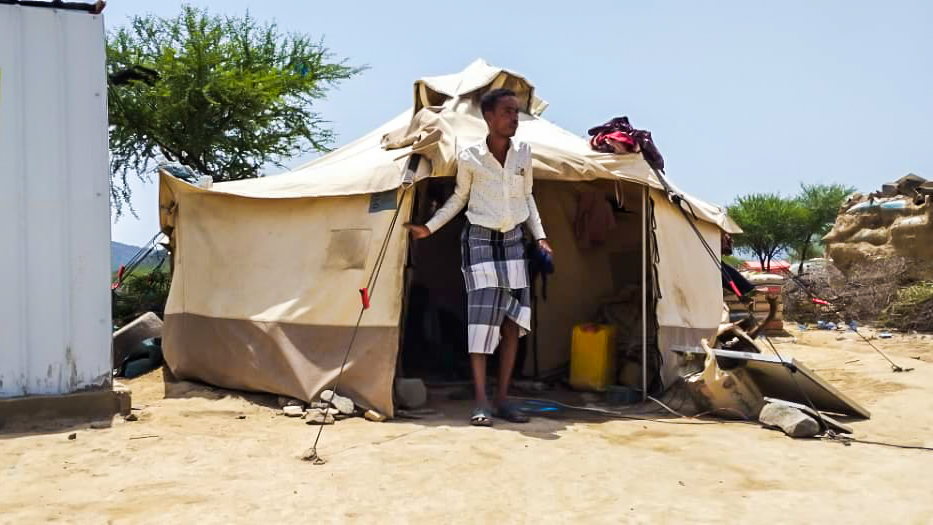 “Every person in the site can now have their daily share of clean water close to their shelters,” said Ayoob Zabl, an IOM Water, Sanitation and Hygiene (WASH) Assistant in Aden Office. “Before, fights over water were common between the host community and displaced people who were coming to the well. Today, these issues have been resolved.”

Saeed and his children are relieved that they no longer have to walk long distances to fetch water. As a father, Saeed can use that time to earn a living, while his children can stay safe at home.

Displaced people continue to arrive in Al Beerain site, unaware of the hygiene practices that could protect them from the virus. Saeed hopes that, amid the COVID-19 outbreak, community hygiene promotion will continue. 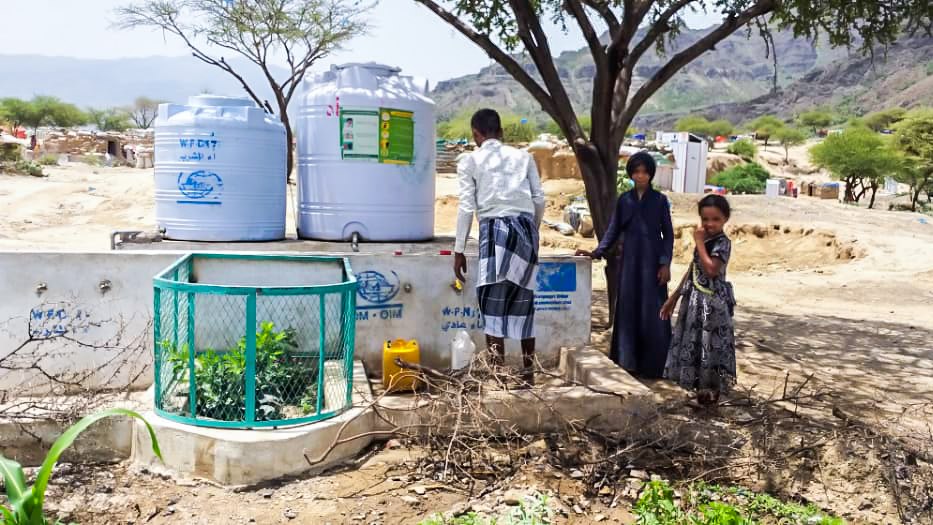 Saeed filling his jerry cans from the tank IOM installed near his shelter. Picture: A.Zabl/ IOM 2020

IOM has trained community hygiene volunteers to spread awareness of healthy hygiene practices and protection measures against COVID-19 among the displaced community in the site. IOM and EU Humanitarian Aid also collaborated to distribute 256 hygiene kits and 768 mosquito nets in Al Beerain.

To solve the water problem in the site permanently, IOM is currently working on a sustainable water solution driven by a solar-powered pump system.