The Voices of Displacement in South Sudan

On 15 December 2016, South Sudan’s brutal crisis entered its fourth year. Since a struggle between political rivals plunged South Sudan into a devastating conflict in 2013, an estimated 50,000 to 100,000 people have died* and more than 3 million have fled from their homes.

Year after year, millions have struggled to survive, exhausting coping mechanisms and dreaming of the day they can return home and reunite with their families. Of course, “home” is often an elusive term, as so many houses have been destroyed and looted over the life of the crisis.

For those in the PoC sites, tens of thousands have not stepped foot outside of the sites’ perimeters for three years. They are essentially imprisoned by the dangers that lie beyond the gates – this is particularly true for men of fighting age.

Women are often more likely to leave the sites to seek firewood for cooking or visit markets in town to supplement the food aid they receive. While it is generally assumed by the IDP community that it is safer for the women to leave than the men, leaving the sites can be dangerous for women, too, as armed men often wait in the bushes to harass or abuse women.

Behind the struggles are stories of perseverance, hope and self-sacrifice. IDPs from the UN PoC sites in Bentiu, Malakal and Juba shared their experiences and told us what it means to live in these sites, where IOM works alongside humanitarian partners to provide lifesaving aid.

While faced with daily hardships, their stories are punctuated by hopes for a better future for the children of South Sudan.

At 32, Vanessa is mother to seven children. When the fighting first broke out in December 2013 and rapidly spread to her home in Malakal town, she and her family fled across the White Nile River. Not long after, they quickly ran out of resources.

Yet, Vanessa and her family could not return to their home in Malakal town, as fighting persisted and many neighbourhoods were destroyed wholesale by the fighting.

They made the difficult decision to go to the Malakal PoC site, where more than 33,000 IDPs still live today.

They have been living there for three years now.

As a mother, her key concern is the well-being of her children. Vanessa is grateful for the food provided by humanitarians, but lacks funds to provide additional food, like sugar and milk, for her children as prices are too high in the market.

“After three years of living here, nothing has showed us that the situation will be better outside. The crisis is going to expand. There is no future anytime soon.”

She is considering taking her family to the refugee camps in Sudan, hoping for perhaps a better future for her children.

She says the camp is dangerous at night due to unruly youth, who have been idled by their confinement, but feels comforted by the work of community police.

In February 2016, her family was confronted by yet another devastating episode of violence, as the shelter where she and her family were living, along with their possessions, was burned during an attack on the site. They are rebuilding “slowly slowly,” she says, but it takes time.

Jacqueline, 20, braids her sister's hair at the PoC site in Juba, which grew rapidly in July 2016 following the outbreak of violence that engulfed the capital city for four days.

Until the resurgence of fighting in July, Jacqueline had been safe in Juba town, going to school and living life as normal since the crisis broke out in December 2013.

However, during the fierce fighting in July, which placed civilians in the crossfire of Government and opposition forces, she and her family were forced to flee to one of the two UN peacekeeping bases in Juba for protection.

Jacqueline says her life and education are on hold, but it is not herself that she is most concerned about. “I am most worried about the lack of schooling for young children and what it means for the future of South Sudan,” she says. 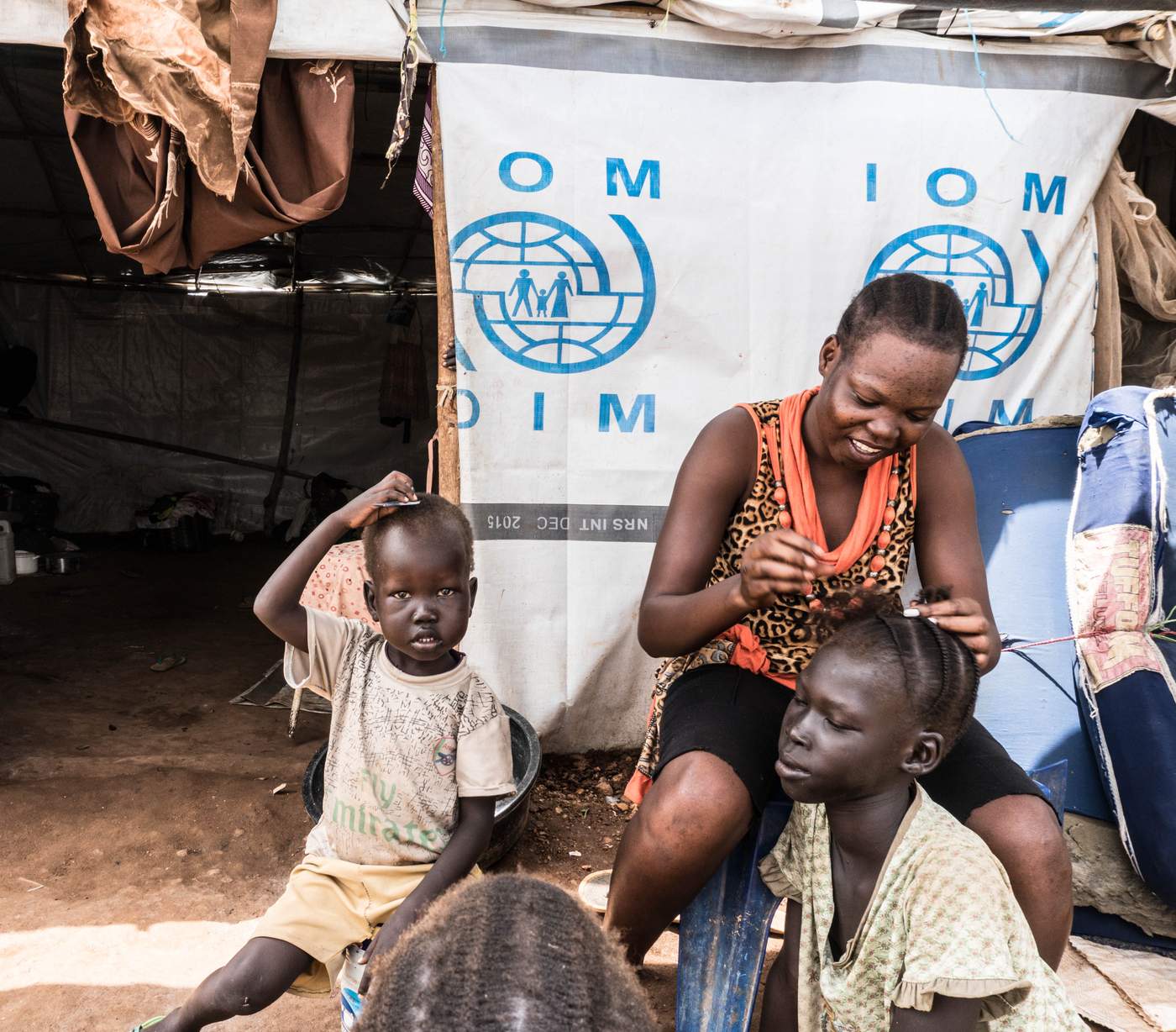 “All ethnicities should be in peace, so issues can be solved and we can stay.”

Suzan is a health promoter at the Malakal PoC site. She finds inspiration and comfort in her work, saying that it helps her miss her family, who she has not seen since the crisis broke out, a bit less.

Although the area is overcrowded, life in the PoC site can be lonely for those separated from their loved ones.

“I felt out of place when I first came here because I was alone. When I wasn’t working, I thought a lot about my relatives outside of the site.” Now, working with the community, she says “I feel comfortable now, as if my parents are here with me.”

Suzan has considered leaving, but she finds purpose in helping those that are often forgotten. She chooses to stay behind to support the most vulnerable, including mothers who have lost their husbands, the elderly and unaccompanied children.

Hungry for news on the peace negotiations between the Government and opposition, she listens attentively as I tell her many were advocating on their behalf, but that the situation did not appear to be improving.

She hopes for peace soon so people can stay in their homeland. For her, “All ethnicities should be in peace, so issues can be solved and we can stay.”

Mary and her family have been seeking protection at the PoC site in Bentiu since early 2014 after fleeing violence in Bentiu town. She is among the more than 120,000 IDPs living at the site.

Mary has long suffered from recurrent back pain. She visits one of IOM's primary health care clinics for treatment from time to time when the pain becomes too strong. She believes the pain is exacerbated by traveling outside of the PoC site to collect firewood, an often dangerous and arduous task.

“I feel better after treatment, but the pain often comes back if I have to carry a heavy load of firewood,” Mary says. 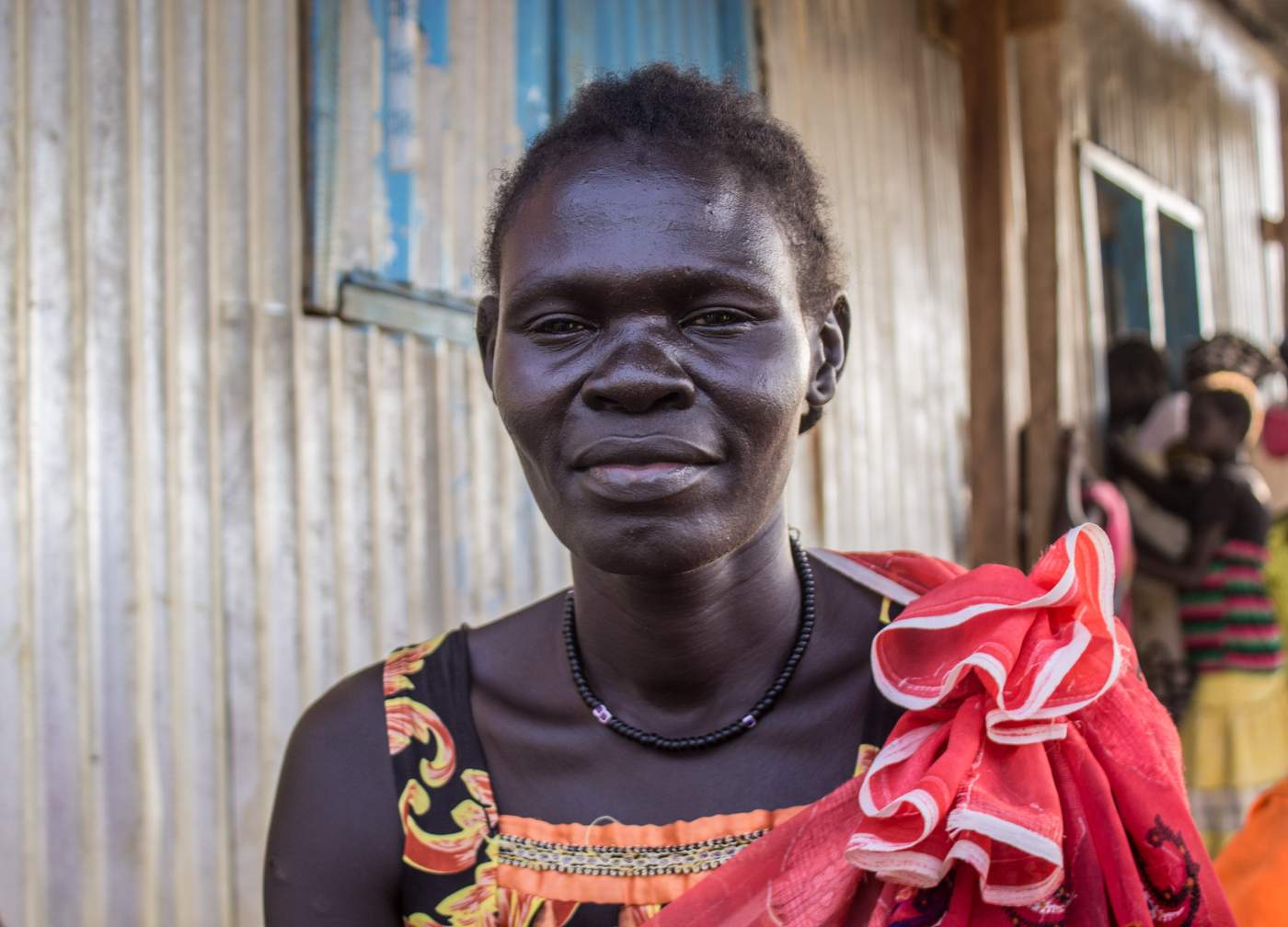 For nearly three years, 31 years old James has not stepped foot outside of the PoC site in Malakal.

Like Vanessa, James and his family fled the fighting that ravaged Malakal town in December 2013 as the conflict swiftly moved from Juba to Malakal. His family, including his children, saw many people killed as they, too, tried to run to safety.

Last week, the family made the decision that James' wife would take their children to Sudan, but James was forced to stay behind due to safety concerns.

He was an Arabic teacher before the crisis, but there is little work to be found in the PoC site. “As a husband, it is hard to care for my family. I hope they can get a better life in Sudan,”James says.

Those that have visited Malakal town have reported back to him that the houses in his neighbourhood were completely destroyed and looted by the fighting.

He still wants to go back home and restart his life from scratch rather than “stay here without a future ahead of me.”

If given a chance to tell the world about his homeland, James asks “that the world stand with South Sudan and push for peace. South Sudanese are tired.”

As the rainy season in South Sudan comes to a close and the dry season begins, civilians are bracing for the seasonal uptick in fighting as forces become more mobile. The IDP population at the Bentiu PoC site, for example, continues to grow. It increased by more than 18 per cent in November alone as people continue to flee fighting in nearby areas, just as they have done for the past three years.

For more information on the crisis in South Sudan and IOM's humanitarian response, please see "Lives Interrupted" or visit our website atsouthsudan.iom.int.

*According to the International Crisis Group:http://reliefweb.int/report/south-sudan/50000-and-not-counting-south-sudans-war-dead
**Some names have been changed.