August 2016: It's a rainy day and the smoke from charcoal stoves fills the air. Families huddle underneath temporary shelters – a quick solution to a rapid influx of new arrivals. More than 28,500 internally displaced persons (IDPs) live on a cramped plot of land protected by UN peacekeepers in South Sudan’s Wau town, the site of gruesome fighting in late June.

Today, these new arrivals are living in crowded but dry communal shelters, and thousands more have settled in smaller structures constructed from plastic sheeting and bamboo distributed in the early days of the crisis.

“We can have freedom, or we can stay like this in the war,” Mary says from her makeshift shelter at the site. The sixty-something matriarch and 18 family members, mostly women and children, live in just two small tents.

Mary, a mother, worker and IDP, fled to the Wau protection of civilians site when heavy fighting hit the town in late June. Photo: IOM/Muse Mohammed 2016. 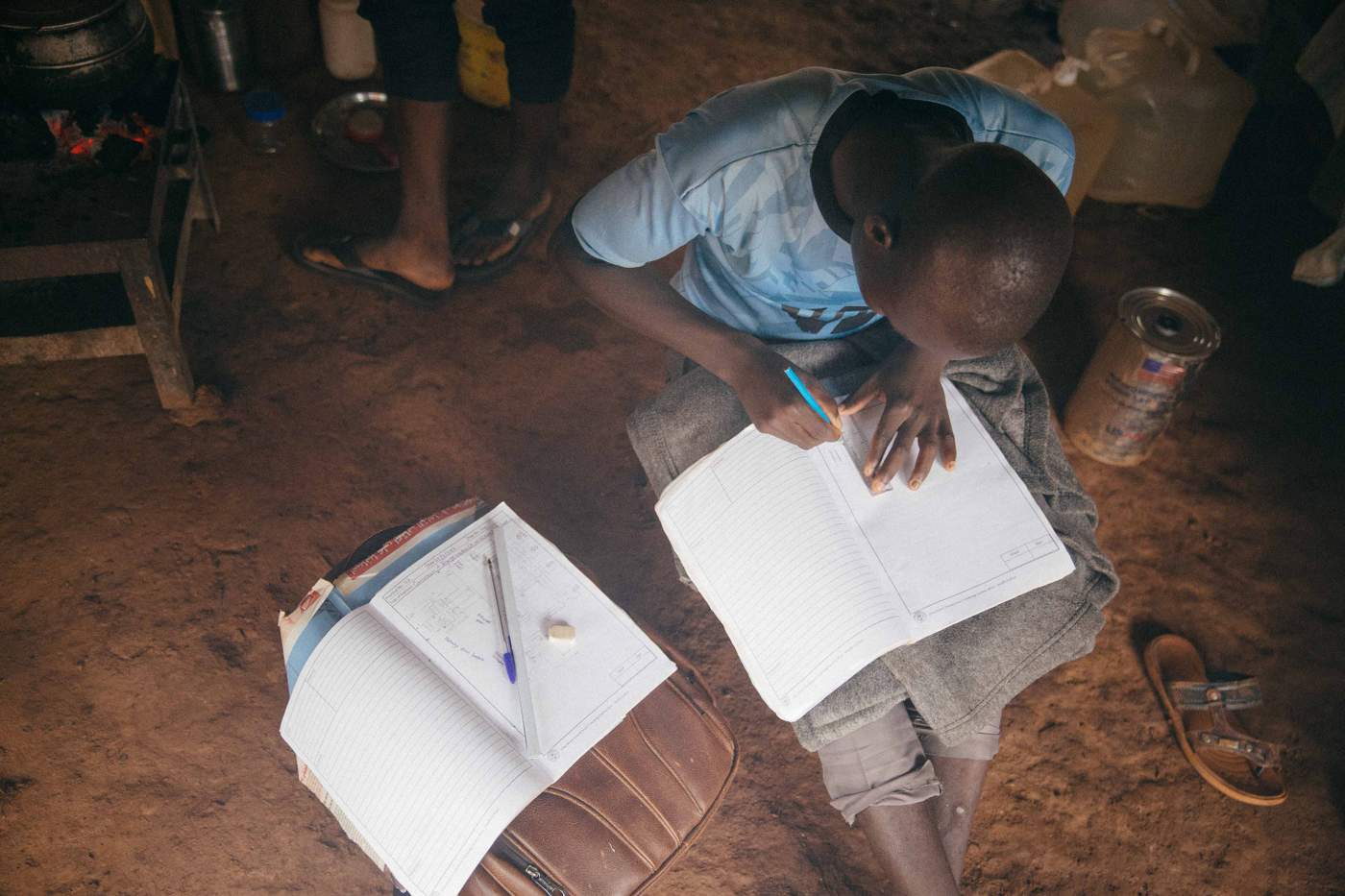 A young man works on geometry homework from his family's tent at the Wau PoC site. Photo: IOM/Muse Mohammed 2016

When fighting broke out on 24 and 25 June 2016 between armed groups in Wau, she and approximately 80,000 others fled their homes to find safety wherever they could, some to the UN Mission in South Sudan (UNMISS) base, others at churches, the South Sudan Red Cross or to remote areas south of town.

Mary, who had a good job before the war, has since learned that her house in town was looted and her most prized possessions – a motorbike, a bicycle and television – are all gone. Her sister was injured. But, she says “it’s not that bad [for us] when I think about the other people who were shot down or had everything burned.”

Her 17-year old granddaughter helps take care of Mary, who has trouble walking, and still manages to leave the site during the day to go to school – it is exam time and to miss this would mean even more disruption to her young life.

UN peacekeepers stand guard around the PoC site adjacent to the UNMISS base in Wau town. Photo: IOM/Muse Mohammed 2016.

As the civil war in South Sudan approaches its fourth year, there is no end in sight as civilians continue to bear the brunt of the violence that has gripped much of the country.

I sat down with a group of women, leaders in their own communities, as they described to me the horrific events they and others had seen, including of a child killed by armed men as his mother carried him on her back. They hope for peace so that they can return home and their children can resume their lives as before.

Since a civil war broke out in South Sudan in December 2013, an estimated 2.6 million people like Mary have had to flee their homes, abandon their livelihoods and spend their days in uncertainty. More than 1.61 million people are internally displaced.

More than a million others have fled to neighbouring countries, which are struggling to cope with influxes that coincide with upticks in insecurity in South Sudan. At least 200,000 of them have fled the country since the recent violence in Juba, the capital of South Sudan, this July. 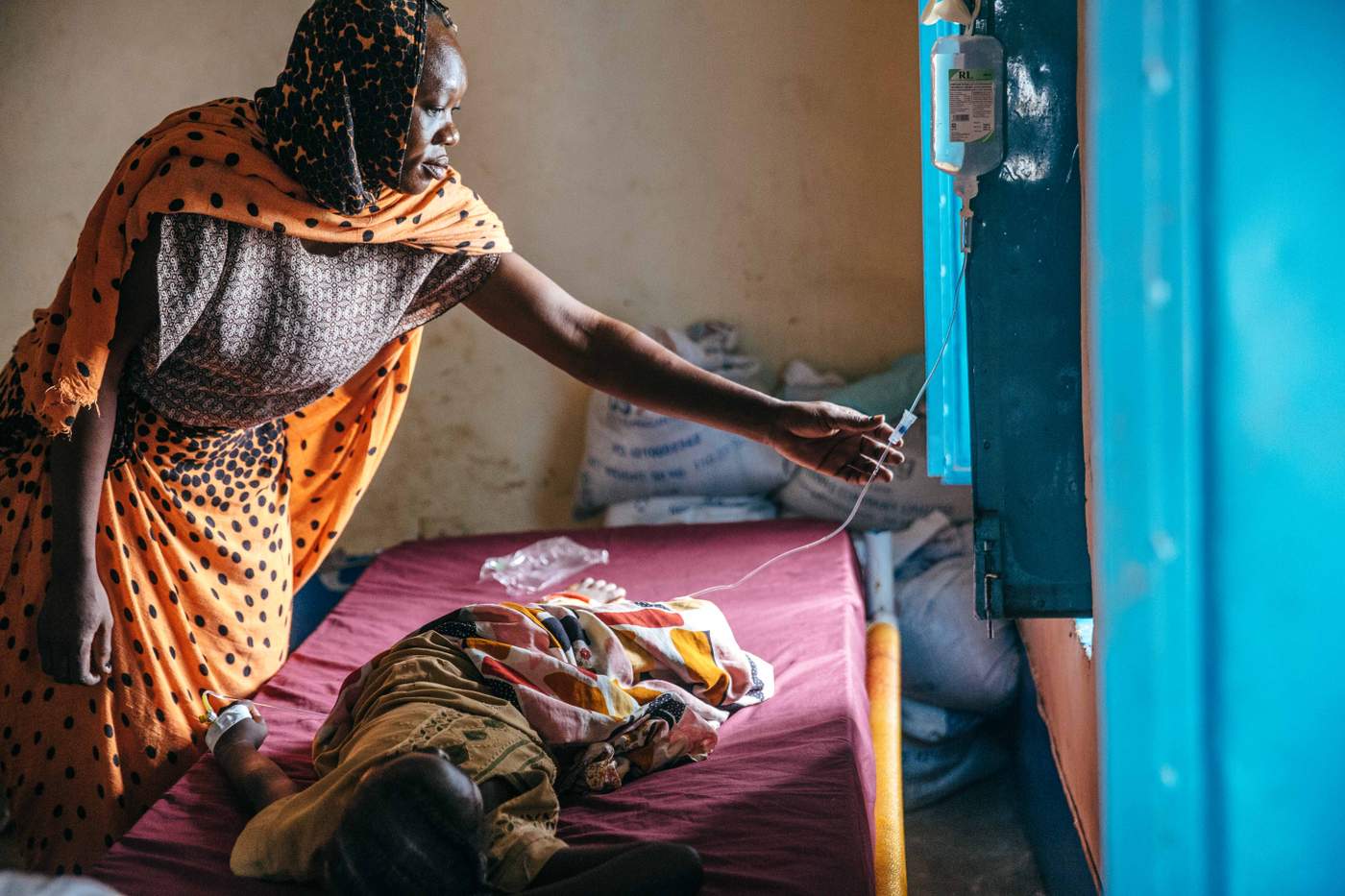 An IOM nurse adjusts the IV for a young girl suffering from fever and stomach pains at the mobile clinic at the Wau Cathedral. Photo: IOM/Muse Mohammed 2016.

Day in and day out, babies like Lisa are born into displacement. Her mother Anne said that the care she received at the IOM hospital was excellent, but she wishes she and her baby could go home.

Humanitarian needs in South Sudan are immense. Due to the war and prolonged displacement, nearly half of the country is facing severe hunger – the worst in the nation's short history. Aid agencies try to reach as many of the 6.1 million people in need as possible but are confronted by increasingly frequent access constraints along the way.

The IDPs in Wau are not unlike the 200,000 IDPs in other UN protection of civilian (PoC) sites at UN Mission in South Sudan (UNMISS) bases across the country, who fear leaving due to the markings or characteristics that give away their ethnic identity. With nowhere else to turn, thousands in Wau rely on aid agencies for basic necessities.

Day in and day out, babies are born into displacement. On 4 August, expectant mother Anne rushed to the mobile maternity ward run by the International Organization for Migration (IOM) on the grounds of the Wau Cathedral, where over 10,000 IDPs have been living since late June. Within minutes, she had safely given birth to a healthy girl, Lisa. She said that the care she received was better than in local hospitals she visited during her previous pregnancies – but she wishes she and Lisa could go home at the end of the day like she had before.

An IOM psychosocial support officer talks to displaced families about psychosocial well-being, provides tips on how to cope with stress in health ways and informs IDPs of the available counseling services. Violence, displacement and widespread tensions continue to contribute to community-wide emotional distress among displaced communities across South Sudan. Photo: IOM/Muse Mohammed 2016.

An IOM rapid response team has remained on the ground in Wau since late June to provide lifesaving aid, ensuring that IDPs have adequate access to safe drinking water, primary health care clinics and shelter, as well as help coordinate humanitarian assistance. Psychosocial support teams canvas displacement sites to help IDPs cope with displacement and the violence witnessed by many.

Outside of town, access constraints have prevented IOM and humanitarians from reaching tens of thousands of conflict-affected households in villages south of Wau town since early July 2016 - a trend that is seen increasingly throughout the country as the conflict spreads to areas that had remained largely untouched by the war until recent months.

A water bladder is refilled with safe drinking water, treated and trucked, for distribution to the more than 24,000 IDPs living in the Wau protection site. Photo: IOM/Muse Mohammed 2016.

Until security conditions in Wau and surrounding areas improve and IDPs feel that it is safe enough for them to return to home, thousands are facing a life on hold as they wait for an elusive peace.

IDPs like David, in his late 50s, who can be found sitting at the grounds of the Cathedral, with a small radio in front of his family's makeshift shelter under a veranda. The radio is one of the very few belongings he brought with him when he ran from his home in June, helping him stay on top of the news around the world and maintain a sense of normalcy. Unable to leave the site out of fear, David says"if I had stayed [at my house], I would not be alive," allowing him to look past the challenging conditions he and his family face.

David sits with his radio at the displacement site on the grounds of the Wau Cathedral. Photo: IOM/Mohammed 2016.

By James Harkin
Conversations in the PoC site in Malakal are punctuated by the endlessly practical science of logistics, heard over a rhythmic clank of hammers upon corrugated iron: the roof around IOM's circle of prefab cabins is still under construction.

A young boy brushes his teeth outside his temporary shelter, made of plastic sheeting and wooden poles, in the Malakal PoC site. Children under the age of five make up nearly 20 per cent of the site's population. Photo: IOM/Brendan Bannon 2016.

This one took place in the office of Anders, IOM's head of operations at the site, who was explaining why he had been reduced to buying the occasional bag of cement from a local market. Then there was Donovan, who has been in Malakal from the beginning and seen everything from civilians running to safety to the daily ritual of children playing in dirty water. Again, our conversation quickly turned to logistics: he needed more trucks, he told me, and they were difficult and expensive to come by. 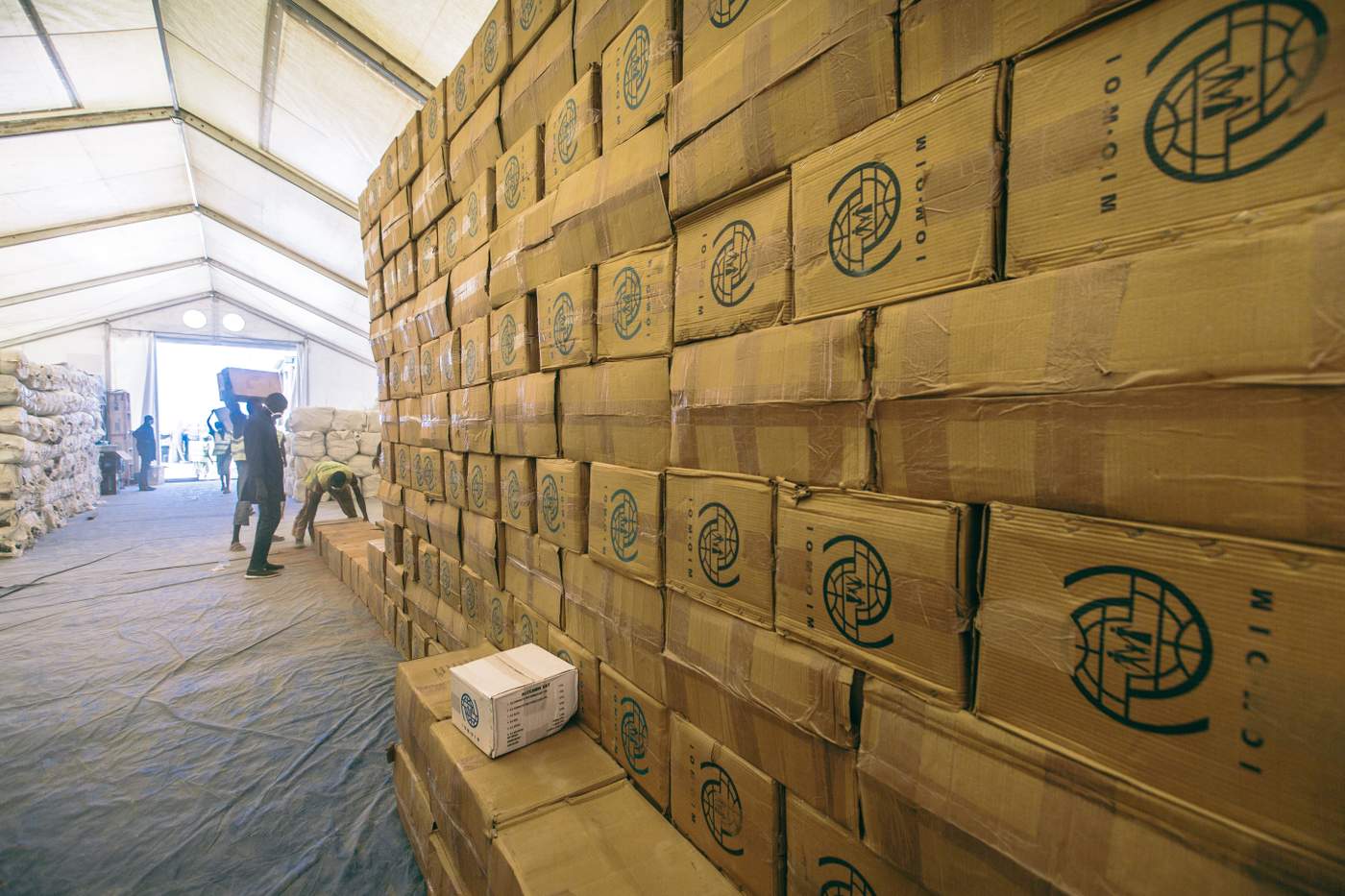 Humanitarian supplies must be pre-positioned in PoC sites to ensure swift access during the rainy season and in times of rapid need. Photo: IOM/Muse Mohammed 2016.

There was reason for all this urgency when I visited Malakal in May, with the camp still working to rebuild itself after a February attack that left dozens dead and vast areas of the site torched.

In Malakal, like many other parts of South Sudan, families are well into their third year of displacement. More than 33,000 IDPs are sheltering at this UN base near Malakal town - once one of South Sudan's largest and most prosperous cities.

A mother brings her infant to a primary health clinic for a medical exam. Amid crowded conditions, compounded by the rainy season, children are vulnerable to water-borne diseases, upper and lower respiratory tract infections and diarrhea. In addition to access to safe water and medical care, health and hygiene promoters play a critical role in reducing illness in the sites by spreading messages on good health-seeking habits and the importance of proper hygiene. Photo: IOM/Muse Mohammed 2016.
sfy39587stp18