As military operations get ever-closer to the centre of Mosul, people are in critical need after two and a half years living under the so-called Islamic State in the Levant (ISIL).

They are facing a horrendous challenge. Human beings – perhaps as many as one and a half million – are trapped on a 21st century battlefield, where weaponry displays astonishing firepower – enough to knock down buildings, destroy vehicles and injure hundreds in a single blast. It is breathtakingly difficult for people to safely leave these areas. 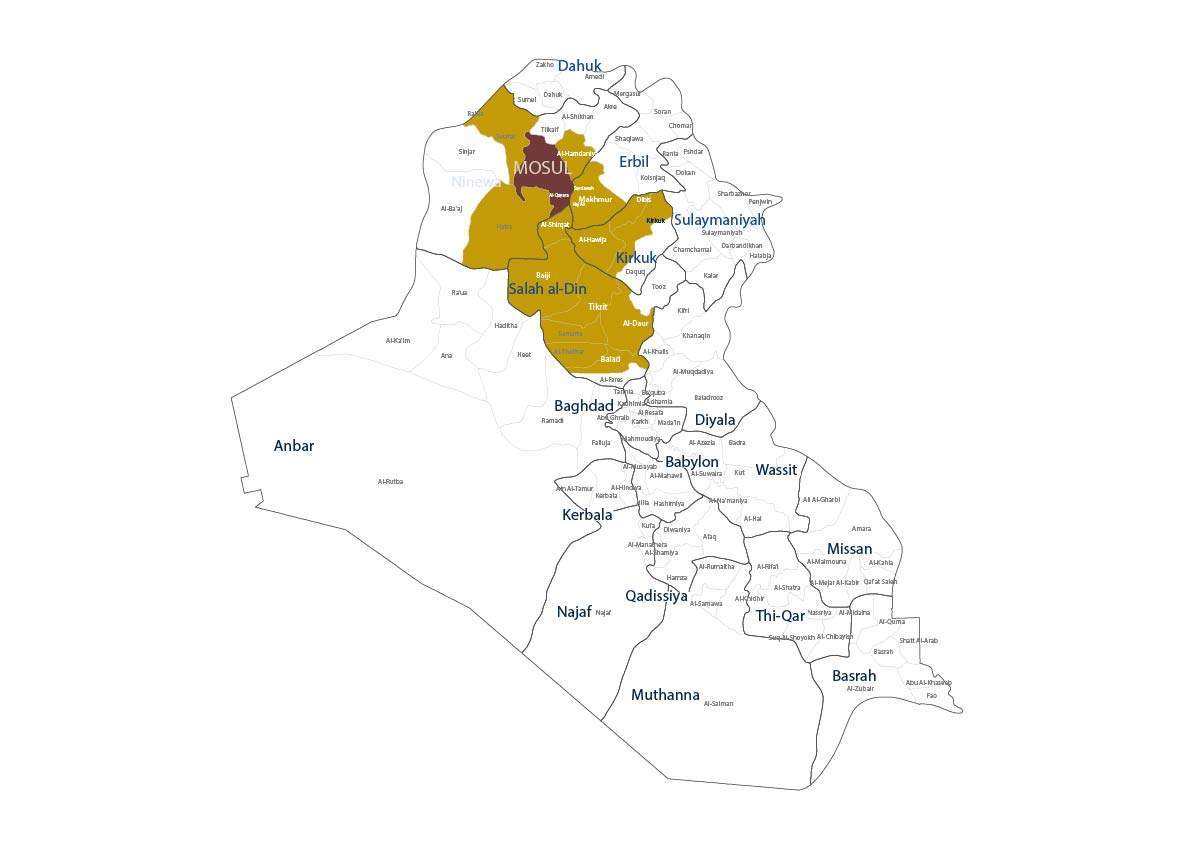 Mosul District is marked in red, while populations affected by military operations along the Mosul Corridor are marked in yellow.

Much of the village of Saydawah lies in ruins after military operations to retake the area from ISIL. Those structures that remain standing may be booby-trapped. Any untrodden ground could be seeded with landmines – threats that will remain long after the military has passed through.

It is breathtakingly difficult for
people to safely leave these areas.

The village of Saydawah lies in ruins after military operations to retake the area from ISIL.

The task is as delicate as surgery, and yet as brutal as a raging oilfield blaze,the residue of which is visible in a backcloth of great, billowing black clouds.

As we drive through the zone where troops are massing, the IOM Iraq team repeatedly has to leave the road while improvised explosive devices are disarmed. One of the vehicles has been hit with shrapnel. 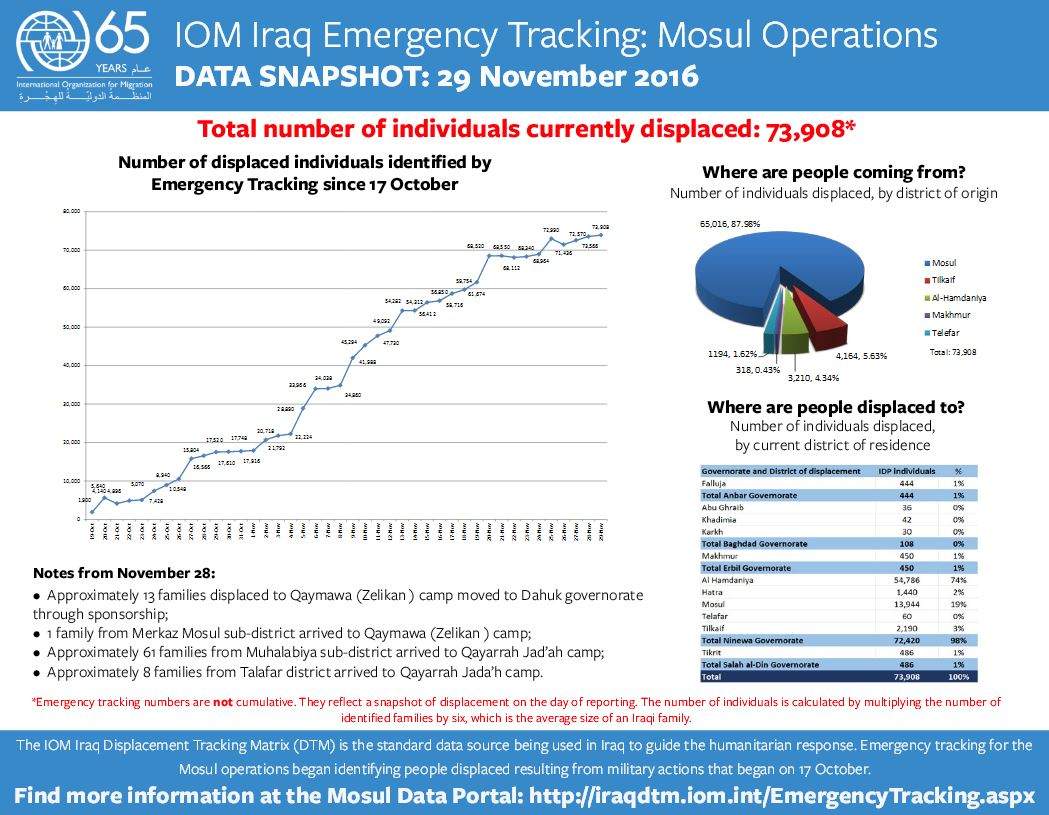 The battle for Mosul is now in its second month. So far, according to IOM’s Displacement Tracking Matrix Emergency Tracking, nearly 74,000 men, women and children have managed to escape the fighting and reach safety.

The task is as delicate as surgery,
and yet as brutal as a raging oilfield blaze,
the residue of which is visible in a
backcloth of great, billowing black clouds.

The victims are there in plain sight – desperate for assistance, yet trapped between two armies.

Their stories are often heartbreaking:

“We went on foot to avoid being seen by ISIL fighters. We walked for 14 hours until we reached a safe area. Now we live in the fourth floor of an unfinished building. We had open windows and were afraid of our children possibly falling. We managed to cover the open windows with “sealing-off kits” from IOM. Now we also have doors and we feel so much safer. It also protects us from the wind.”

Abu Ahmed*, 45 years old, is from a village in Al-Shirqat district in Salahal-Din governorate. He and 15 family members fled their home. 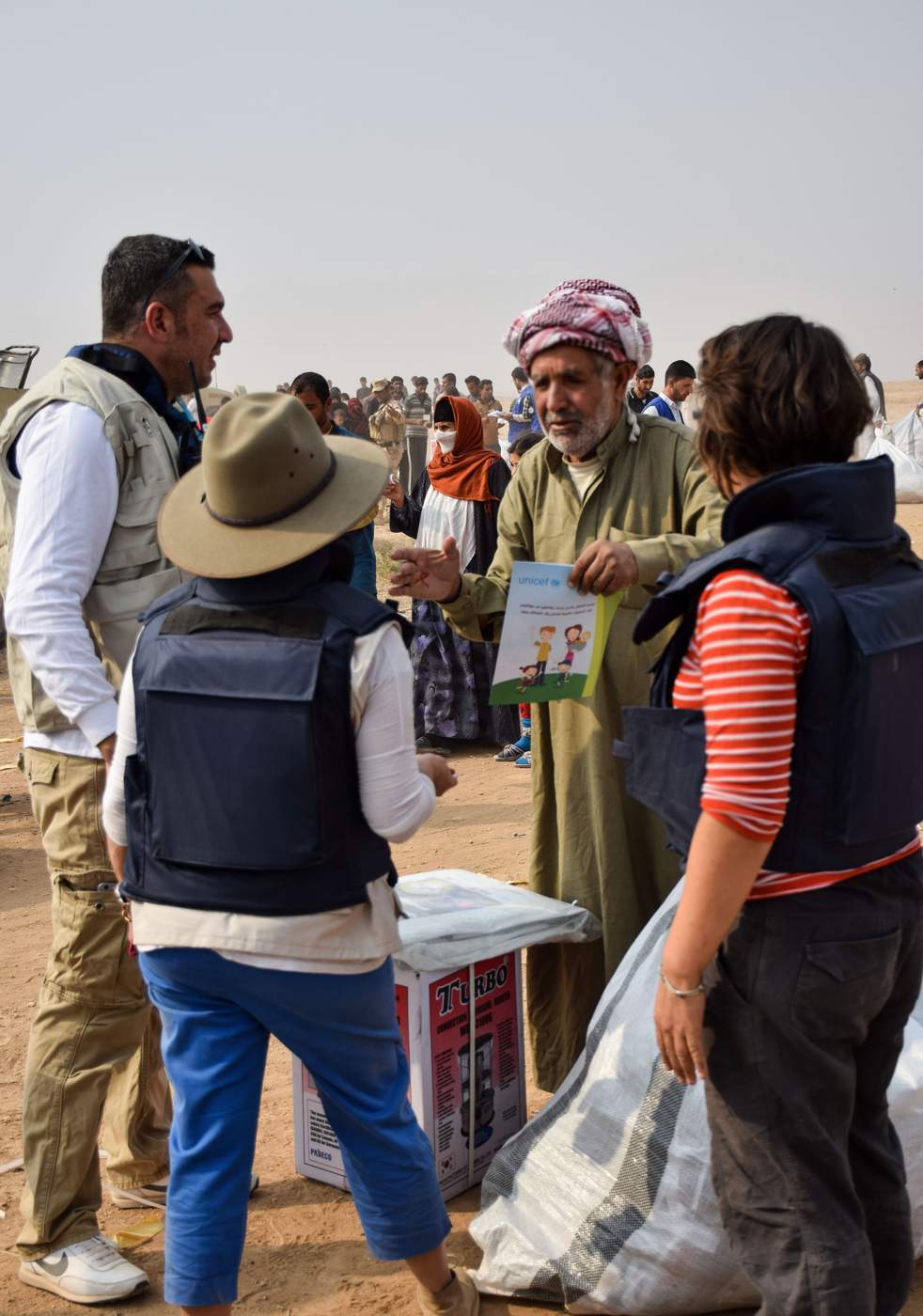 An internally displaced man shares his story with staff from IOM and a partner agency. As first responders in newly retaken areas, IOM staff are often the first outsiders people in previously ISIL-held areas have contact with.

“There was fighting in our neighbourhood for four days and mortar shells, rockets and grenades were falling everywhere. We stayed in our house and hid under the stairs, hoping that the fighting would soon be over. Then a car bomb went off right outside the door in front of our neighbor’s house. The blast was so huge that it damaged many houses in the surrounding area. And it killed everybody in our neighbor’s house – 17 people, including women, children, old people. Everyone. That’s when we decided to leave no matter what. We had to walk about five kilometers to reach the Iraqi forces side.”

Mahmoud, a father who escaped with his wife and son 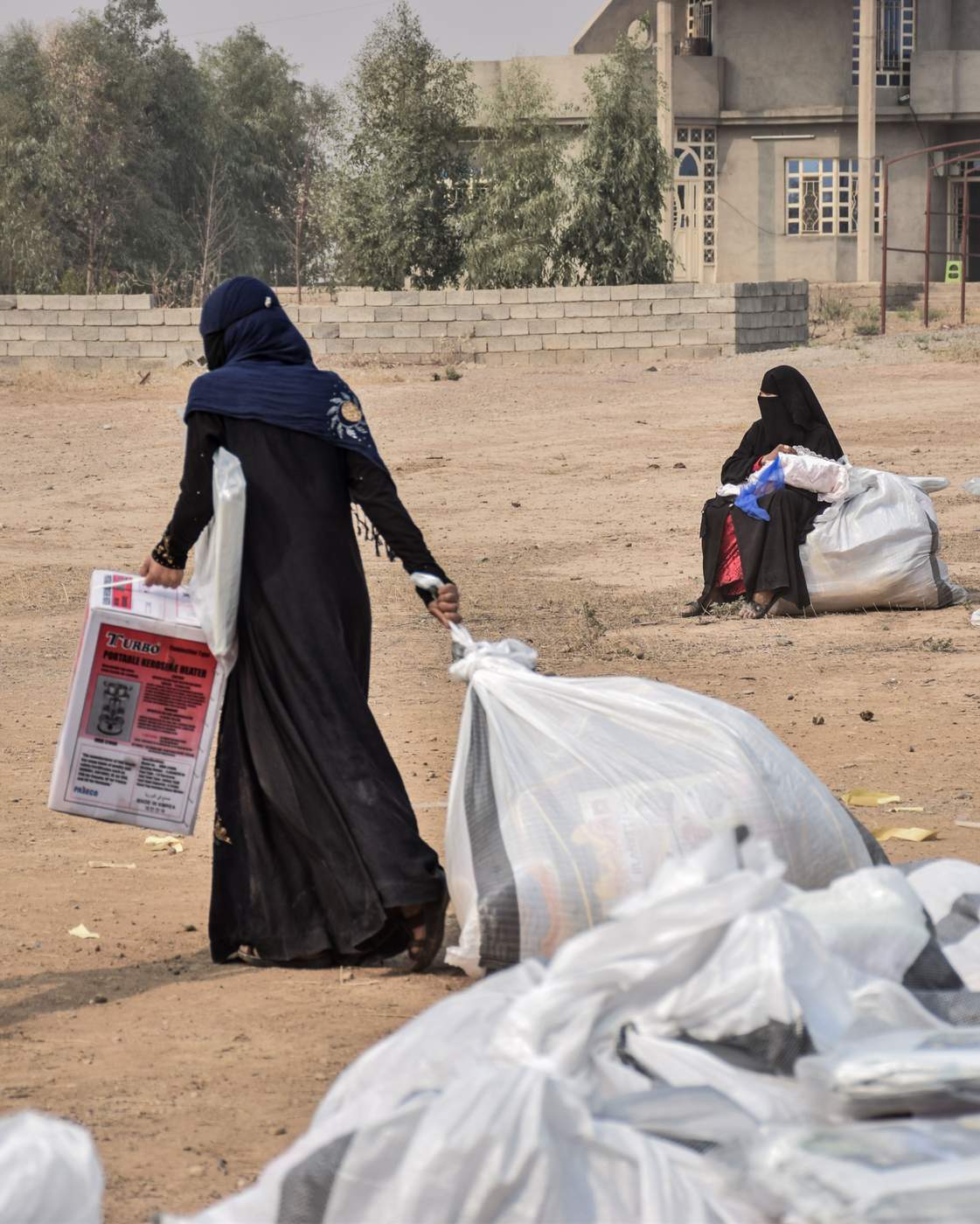 Women were subjected to some of the harshest and most stringent restrictions and punishments under ISIL.

Khokhe Namer, 40, agrees that most of the displaced families would return to their villages, but only once they are assured of the protection of the international community and the Iraqi government. Besides the violence of ISIL’s attack on her village, she says that women in her village were sold as sex slaves in the market.

“The militants sold women to each other, to other militants. We will not go back to that, ever,” said Namer.

"The kids are hungry.
We don’t have anything
that wasn’t given to us."

Khadija and her sons live in a camp run by the Iraqi government, while her husband tries to eke out a living in their village. IOM gave the family a non-food relief item kit, and is working with camp managers to facilitate the smooth running of the camp.

IOM is among the humanitarian agencies helping people displaced by the fighting in Mosul, but the challenge is enormous. How to help those lucky enough to have managed to escape? How to prepare for those yet to come?

IOM DG William Lacy Swing is briefed at the Haj Ali Emergency Site, southeast of Mosul, which will accommodate up to 1,000 displaced families.

In the 65 years IOM has been grappling with humanitarian emergencies worldwide, it has faced similar situations. Mosul – like other emergencies - is anticipated, but its twists and turns occur hourly. One of IOM's core strengths is its flexibility to respond to the ever-changing situation on the ground.IOM’s aid “pipeline” includes tents, emergency shelters and non food relief items. It has dozens of heavy vehicles on standby to bring aid to those in need. 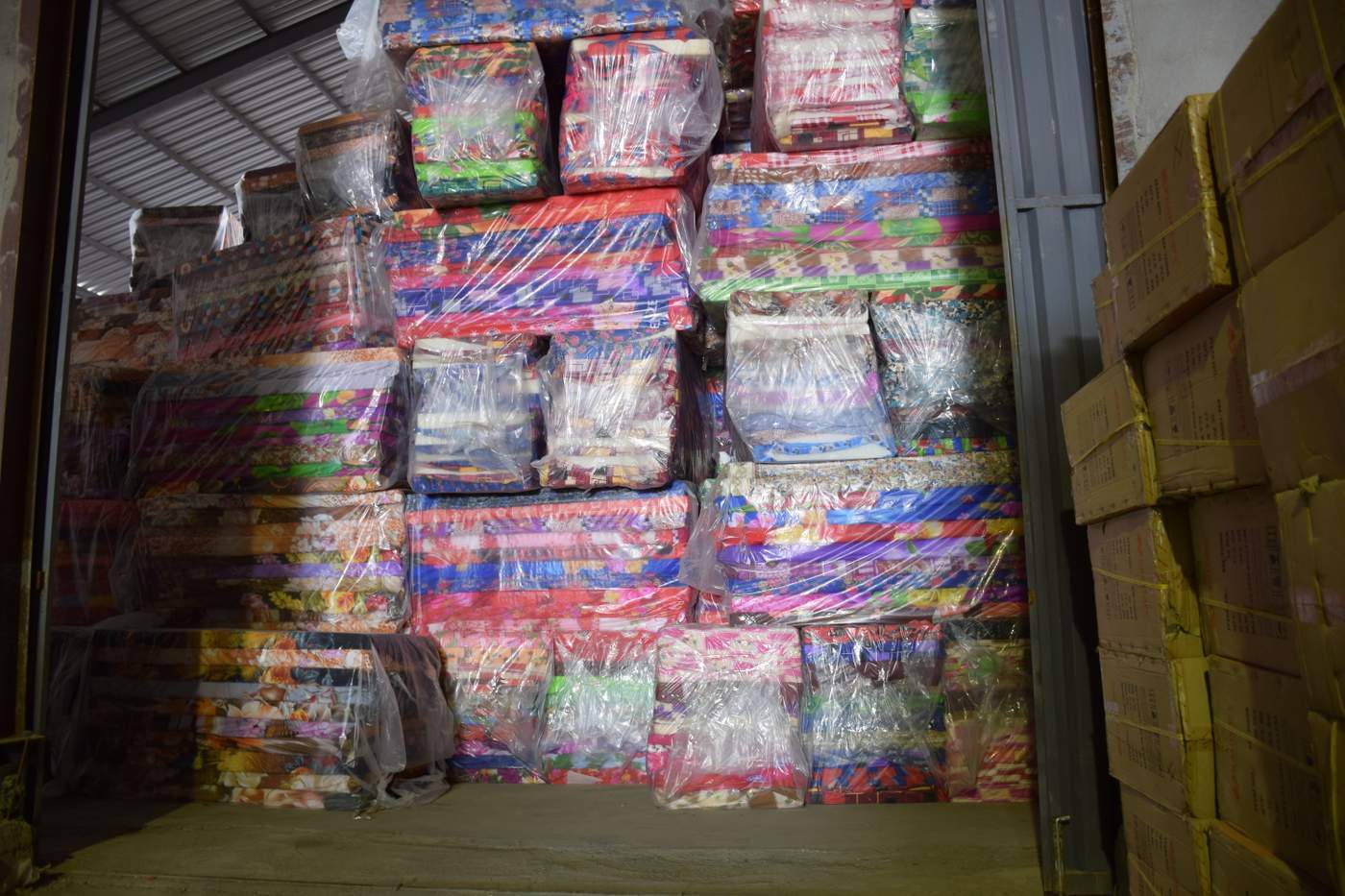 But as aid arrives, people are being pulled back towards the fighting. Although nearly 74,000 have escaped to safety from villages just outside the battle zone, many of their neighbors and family members have been unable to follow.

As the fighting moves closer to Mosul's centre, a second threat is also looming: winter is approaching. 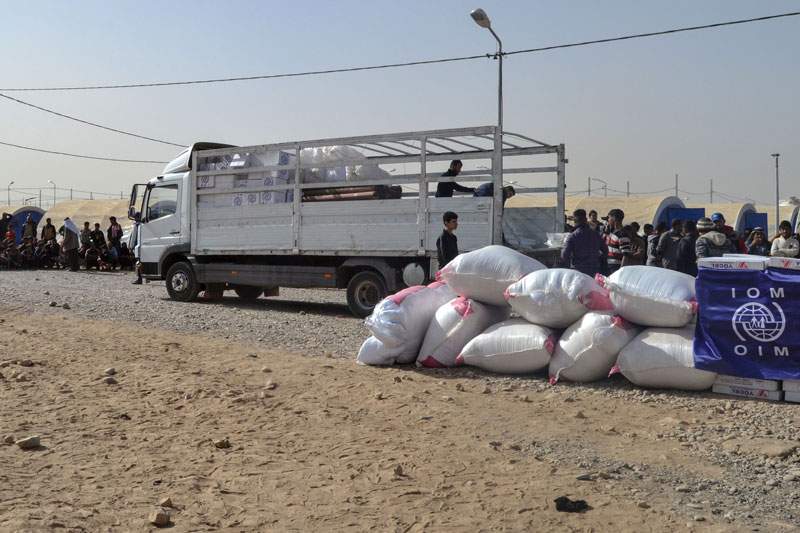 Non-food item kits were distributed in Jada'h Camp to help IDPs prepare for the onset of winter. © IOM Iraq 2016

ISIL has also driven people into Mosul to use as human shields. These are the non-combatants who must wait, often surrounded by explosive devices sown by ISIL fighters still inside the zone. It is desperately dangerous for those families to stay. But it may be more deadly to leave. 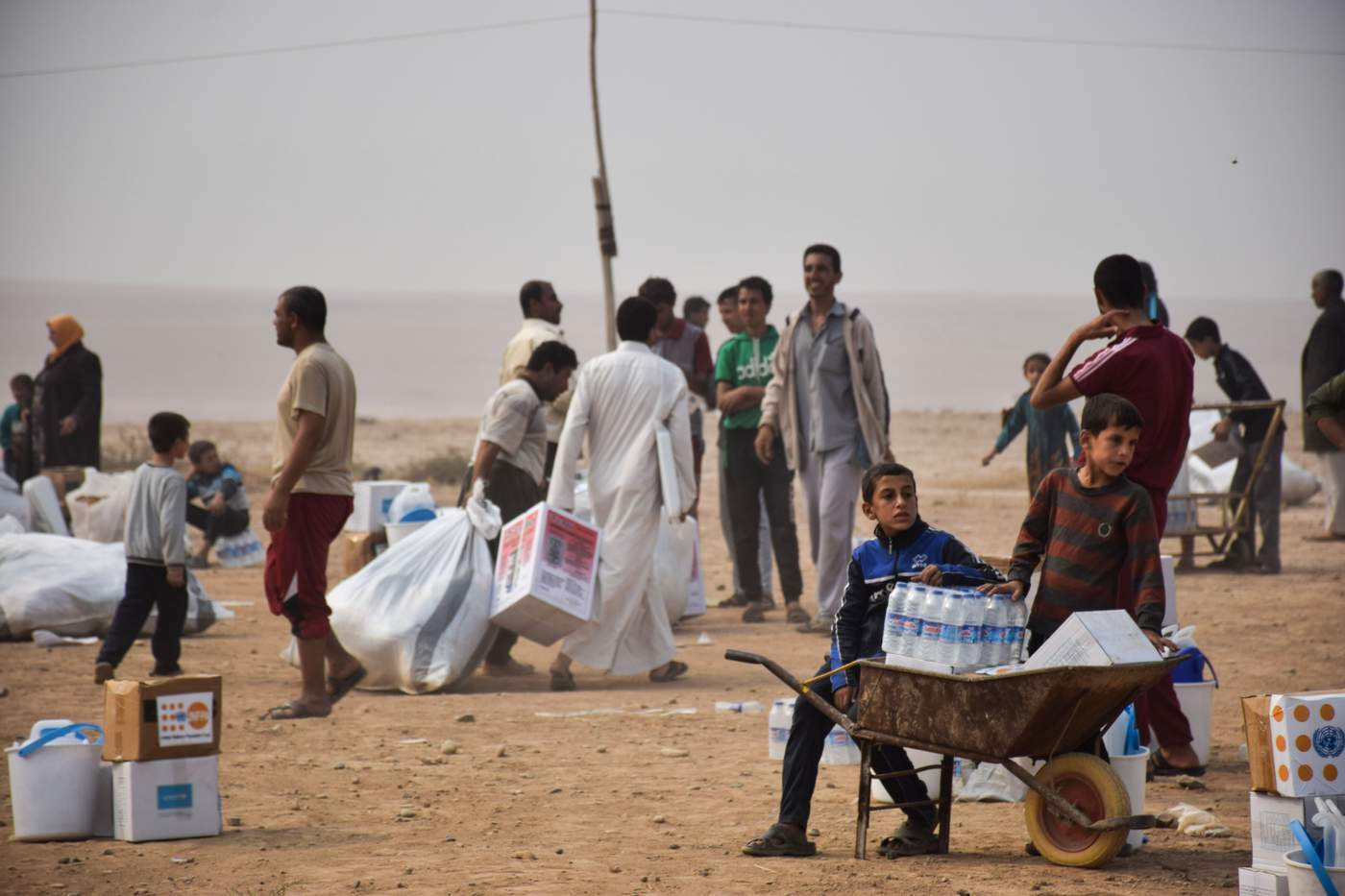 "Do you have toys?"
Two young boys standing with their family's non-food items are eager for entertainment after over two years of harsh austerity and brutality under ISIL.

Four of five Mosul bridges spanning the Tigris River on the eastern side of the city have also been destroyed – limiting the avenues for escape. That could mean massive loss of life, injury and displacement long before the fighting ends – and then a flood of survivors once it does.

IOM responds to emergency displacements typified by Mosul – but that is only a beginning. It also plans for subsequent stabilization, helping the displaced to restart their lives, generate income and, ultimately, return to their homes. That is the real outcome that we are racing to achieve every day. 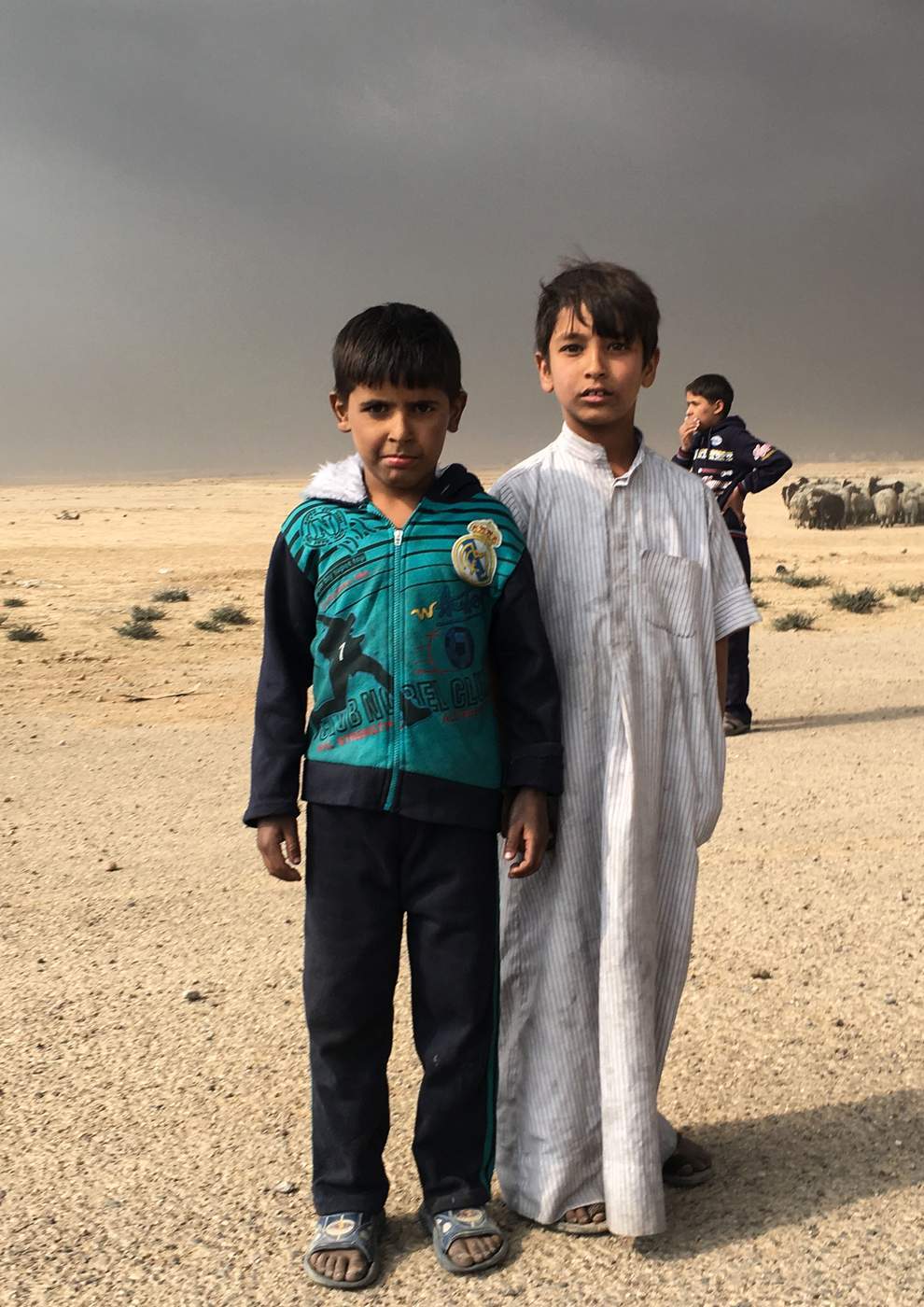 Young boys living along the Qayara Airstrip have many of the same needs as those who will soon be living in the Emergency Site established along the former runway. Their families, in need of livelihoods, have benefited by being hired to help with the construction of the emergency site.

You can donate to IOM relief efforts worldwide by going to our Donate page here.