How Wheelchairs are Impacting the Lives

of a Yemeni Brother and Sister

Jana and Mohammed playing together in their home in Sana’a. Photo: IOM 2020/ Mennatallah Homaid

Sana’a – Jana was two years old when she began finding it difficult to stay balanced on her feet. By three, the toddler could no longer walk.

It is a few years later and her parents are still searching for answers about her condition.

The crisis in Yemen has proven extremely difficult for everyone in the country and, in particular, for displaced families caring for children with disabilities, who live away from their homes and familiar support networks.

Abdullah, Jana’s father, is a pharmacist who left Zabid district, Al Hudaydah, in 2015. Life in Sana’a city with five young children to provide for has not always been easy for him and his wife, Eshraq.

But back in 2011, around four years before the crisis began, Abdullah and Eshraq were living a much different life. They were overjoyed when Eshraq gave birth to a baby-girl, Jana.

“Jana was a healthy child who loved to move but as she turned two, she started to stumble, losing her balance and her ability to walk,” said Abdullah.

Her parents took Jana to different doctors, all unable to figure out the cause of her functional difficulties. The family felt helpless. 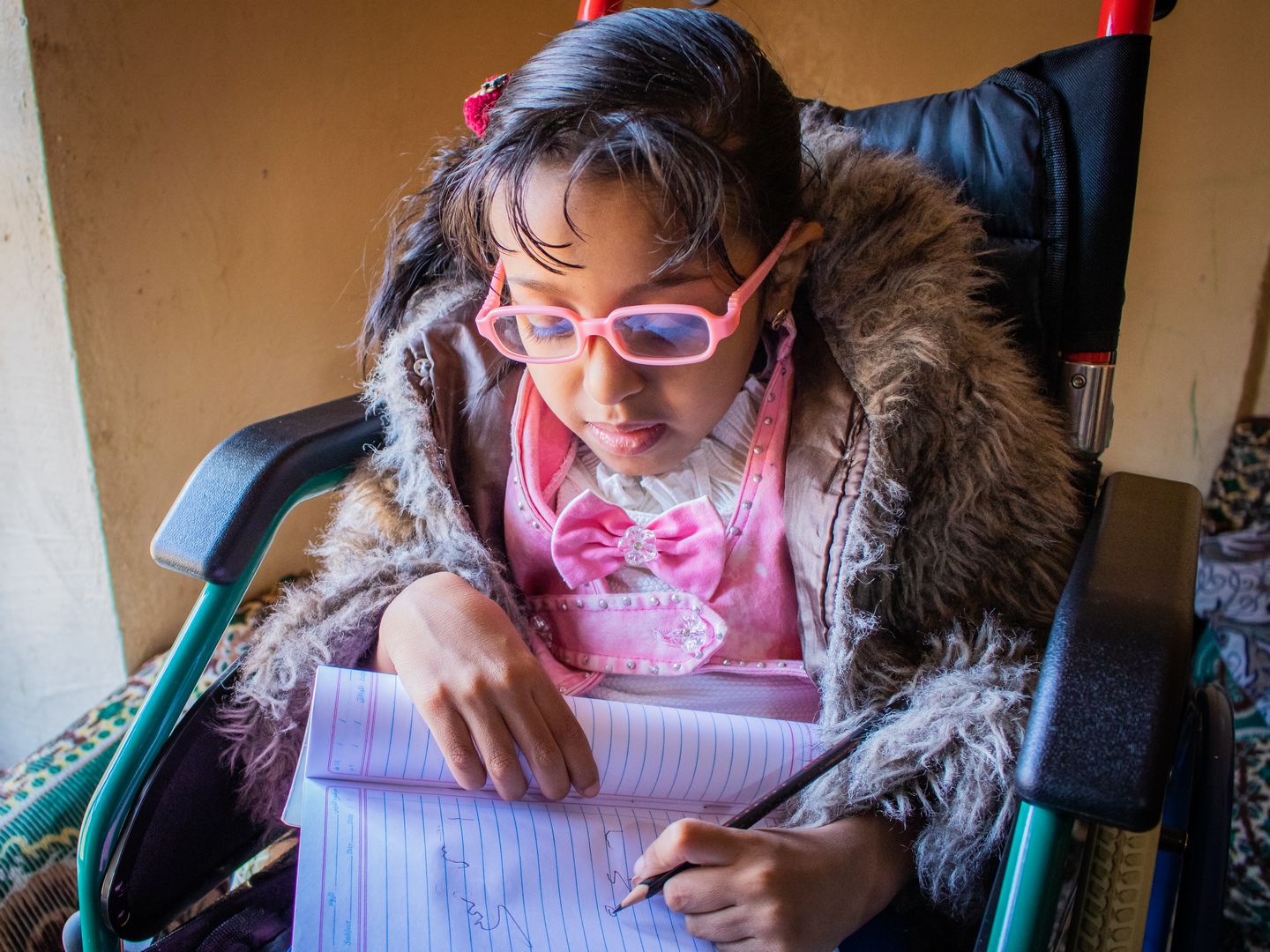 Jana studying in her wheelchair, which was provided by IOM through support from DFID. Photo: IOM 2020/ Mennatallah Homaid

“The doctors needed to do additional tests that we couldn’t get in Yemen. They told us that our daughter would have to travel abroad to get better diagnosis and treatment,” added Abdullah, who cannot afford to take his family oversees for health care.

Mohammed, born two years after Jana, was perfectly fine until the age of three when like his sister, he also began to lose his ability to walk.

“Whatever happened to Jana is happening to Mohammed too, but slowly,” Eshraq said. “Both children have brilliant mental capabilities. We don’t know exactly what the problem is, the doctors assume that the problem is that the children’s muscles are deteriorating,” she added. 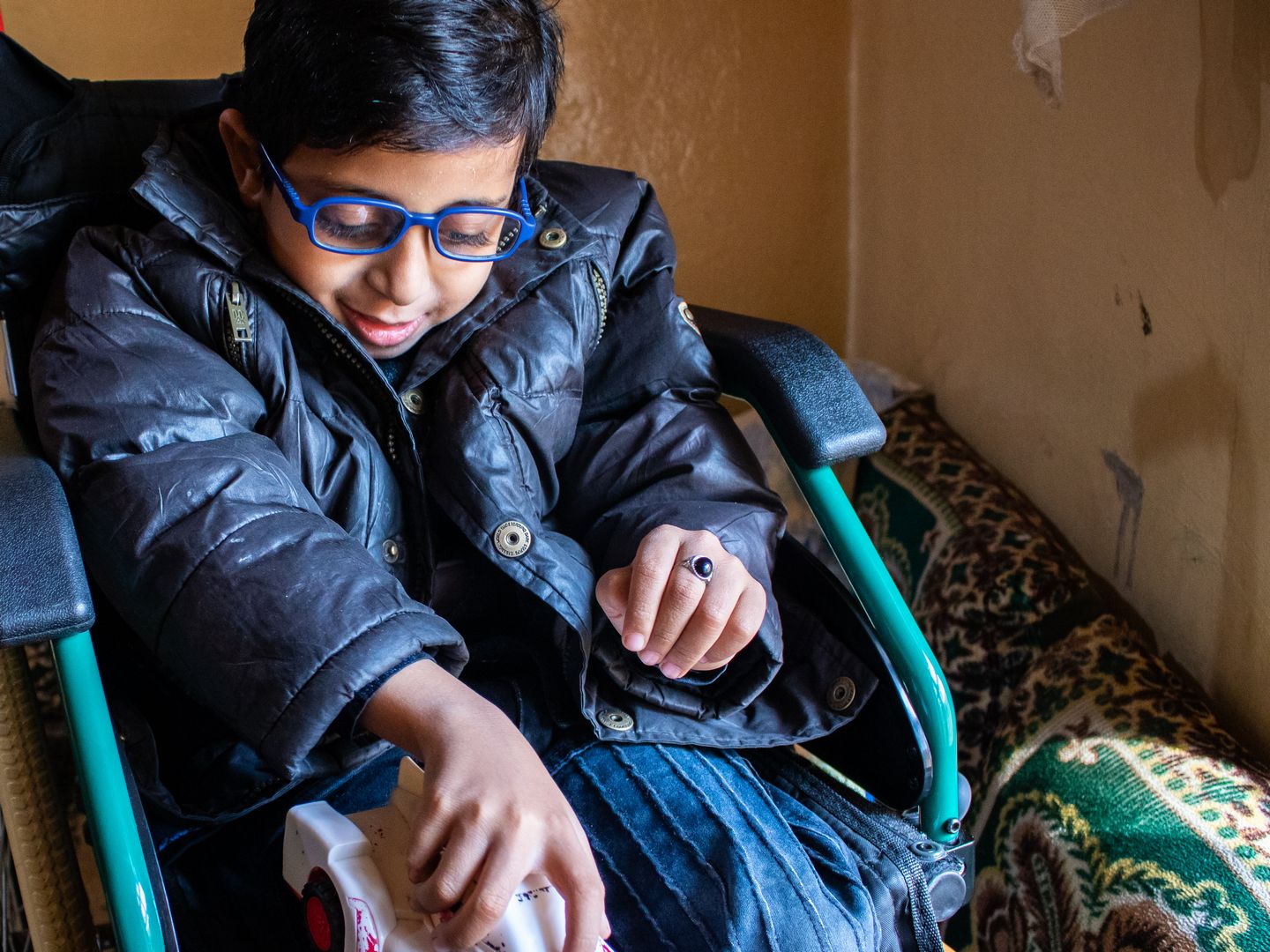 Mohammed playing in his home with a toy car. Photo: IOM 2020/ Mennatallah Homaid

Now, Jana is eight years old and Mohammed is six.

Jana’s condition is still getting worse. The functionality of her leg, arms and neck muscles has gradually degenerated.

Abdullah and Eshraq never gave up on finding some sort of treatment for their children. They take them twice a week to Al Tahadi Center for Physiotherapy and Rehabilitation.

It took a while for Abdullah to be able to afford to buy his children glasses for their visual impairments, and wheelchairs were pretty much out of reach.

“Last year, we registered Jana in a regular school, and we had to carry her to and from school every day. I spent my afternoon going between school and home to check on her,’ said Eshraq.

“We looked everywhere for someone to support us with wheelchairs, but given the situation in Yemen, no one could help,” said Abdullah who later found relief with a programme run by the International Organization for Migration (IOM) that provides assistive devices to help children with disabilities.

Before they received the wheelchairs, the parents would take turns carrying Jana and Mohammed, even on public buses for about eight kilometres to their physiotherapy sessions.

IOM’s team in Sana’a delivered the chairs to the family’s house so the parents would not have to carry the children to the office.

“These chairs mean freedom for the children and for us too,” said Abdullah. 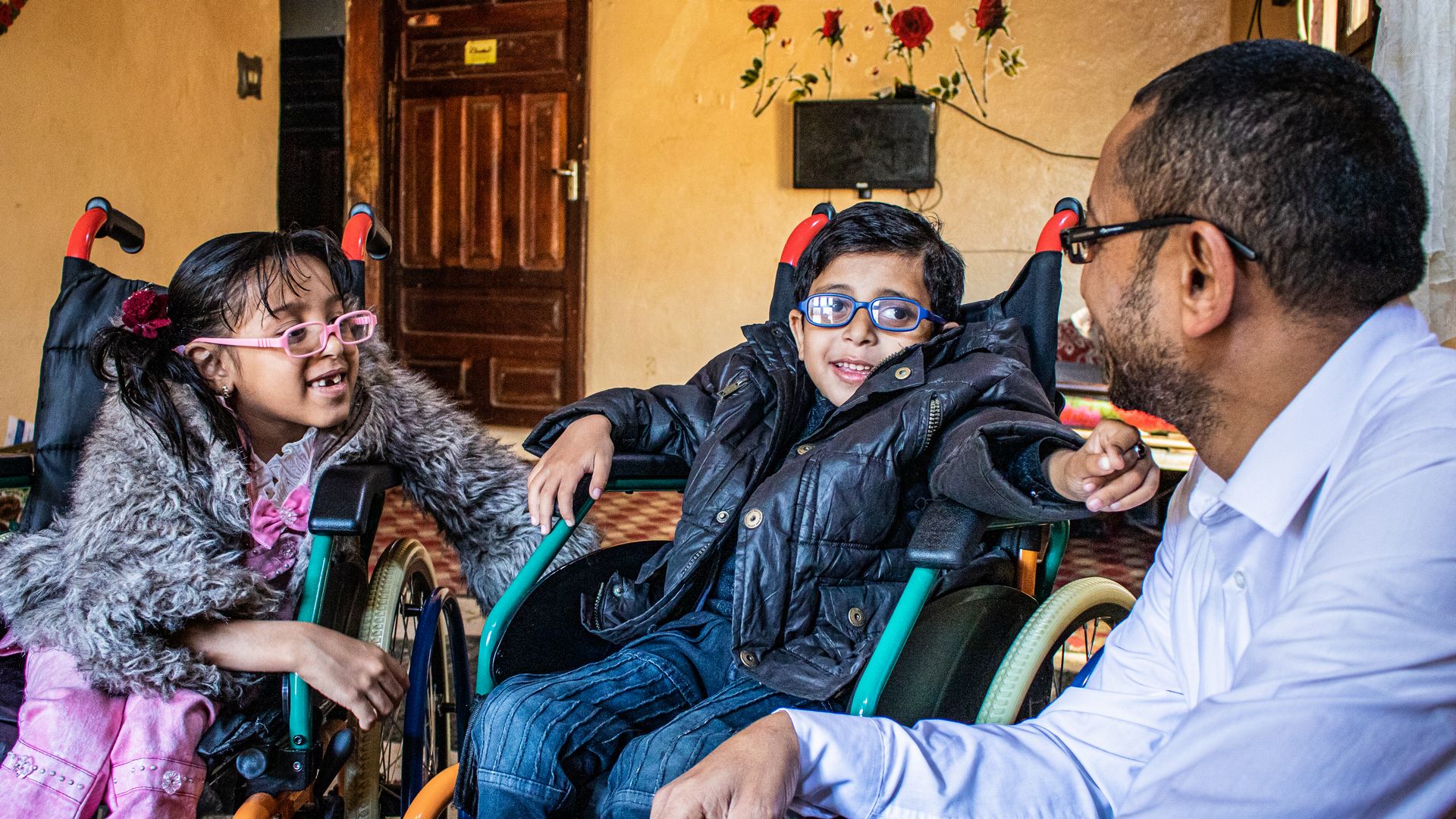 Jana and Mohammed spending time with their father at the family’s house in Sana’a. Photo: IOM 2020/ Mennatallah Homaid

The family can easily go to the playground together.

“I love my wheelchair because I can sit on it and play with my friends,” said Jana, now a second grader who dreams of becoming a doctor.

Both parents are still hoping to get support to take their two children abroad for diagnosis and treatment before their conditions deteriorate further.

Through support from the United Kingdom’s Department for International Development (DFID), IOM was able to provide nearly 230 children living with disabilities with 140 wheelchairs, 40 assistive hearing devices and 91 glasses in 2019.

The story was written by IOM Yemen’s Mennatallah Homaid.