New Livelihoods Opportunities: A Welcome Relief for Families Displaced by Drought in Ethiopia 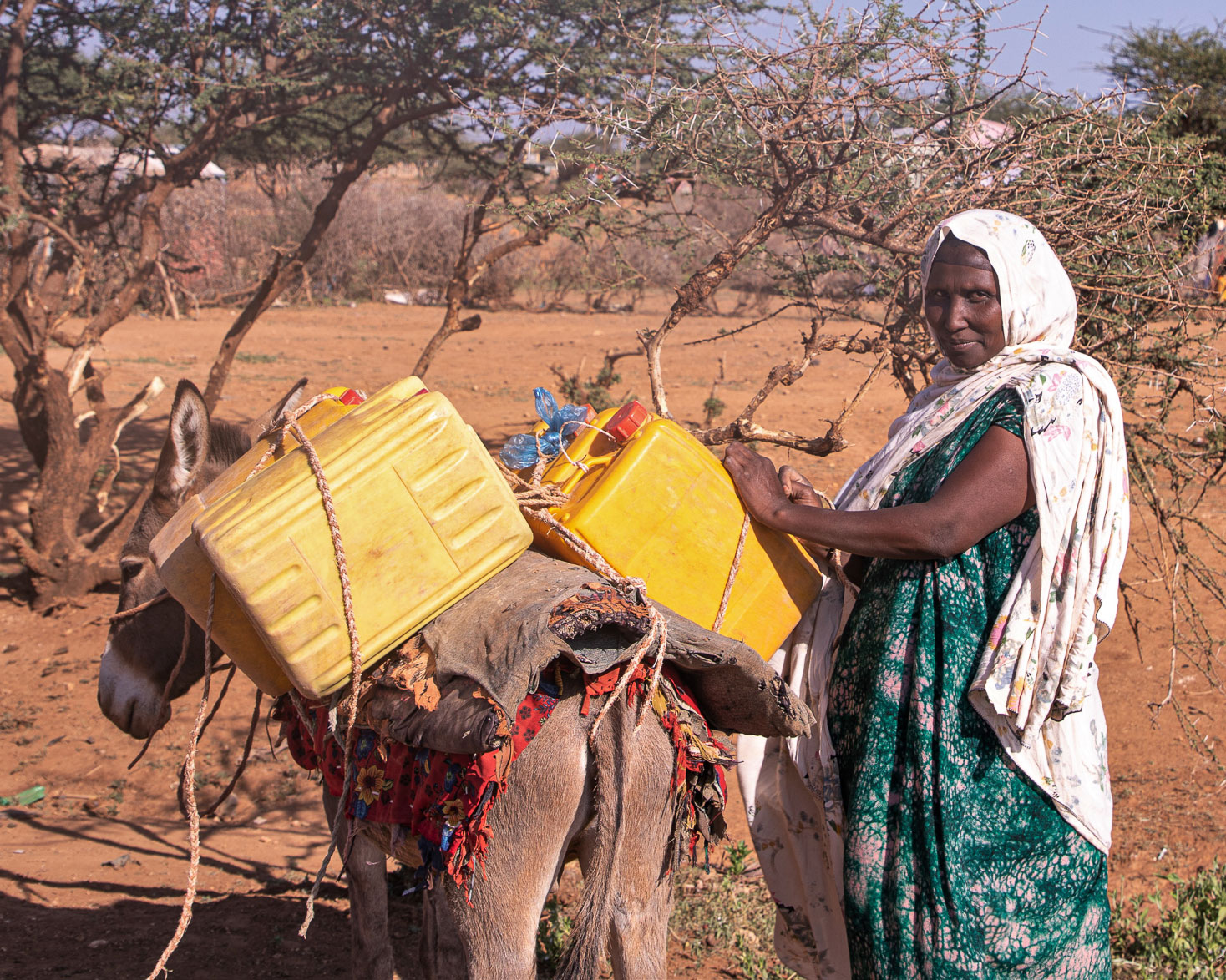 Like many other people faced with the harsh realities of the drought, Halimo and her family were forced to flee and seek help elsewhere. Photo: IOM/Rahel Negussie

Somali Region, 3 January 2023 – “Due to the drought, I lost all my livestock and was forced to move here with my family,” says Halimo, a displaced mother of nine.

“We survived, but we have lost our livelihoods in the process.”

Like many other people faced with the harsh realities of the drought, Halimo and her family had to move to the Garbo district in the Somali region of Ethiopia – now home to thousands of people fleeing the impact of the worst drought in four decades.

Families usually have to travel far to find help, sometimes on foot for days on end. Most of them arrive empty-handed, with no means to support themselves.

Humanitarian partners estimate that more than 2,200 people have migrated to the town in the last five years and this number is expected to rise as people continue to look for ways to survive.

Mohammed’s story is similar to that of Halimo.

“I have never seen this kind of drought in my life,” he says. “I thought it was just an old wives' tale my grandfather used to tell me. Now it’s my reality.”

Mohammed is a pastoralist who was displaced from a grazing area called Seeley. The drought killed all his livestock, so he was forced to move to Garbo five months ago. He came with eight members of his family who are now living scattered across the Karin-Cagag village. 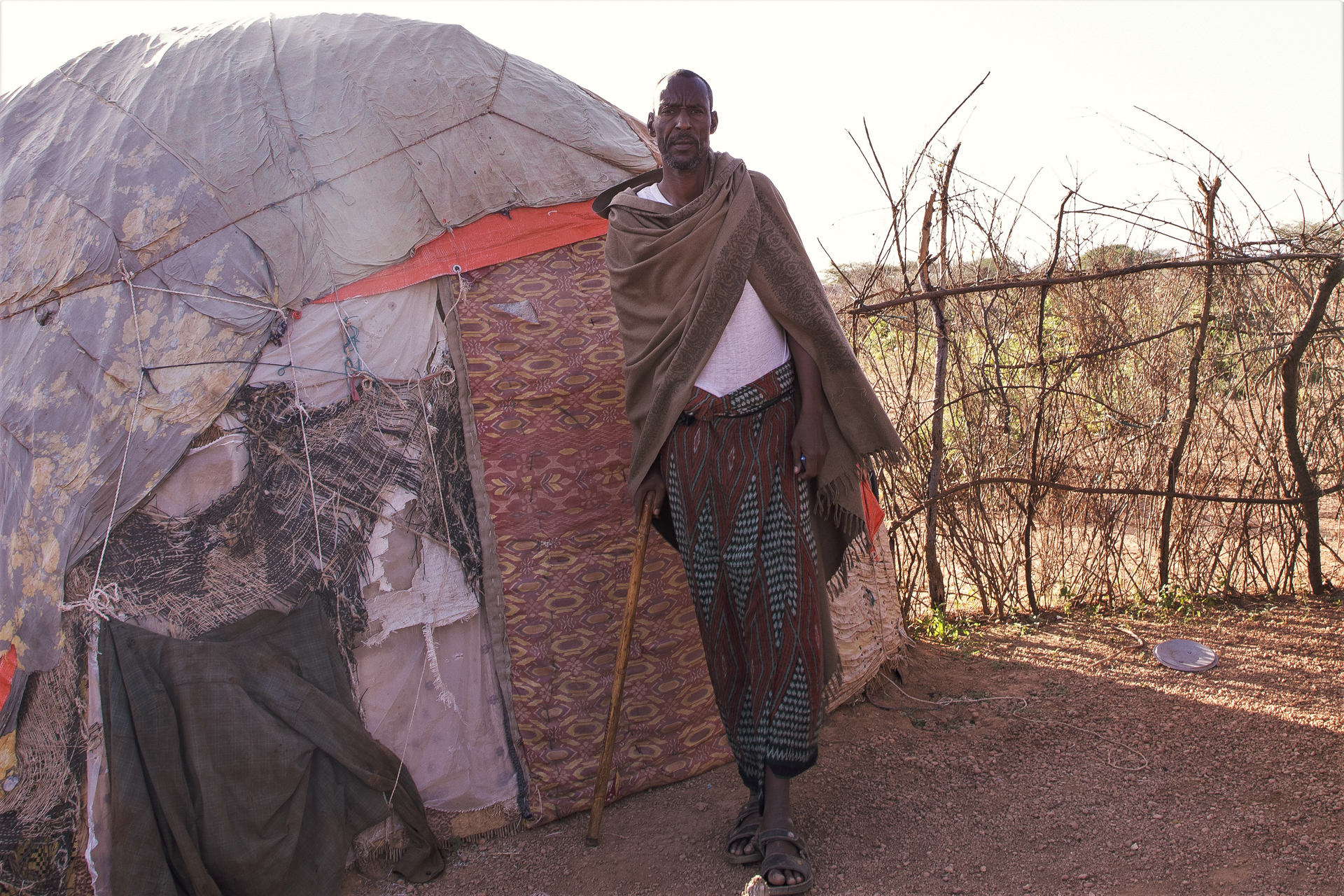 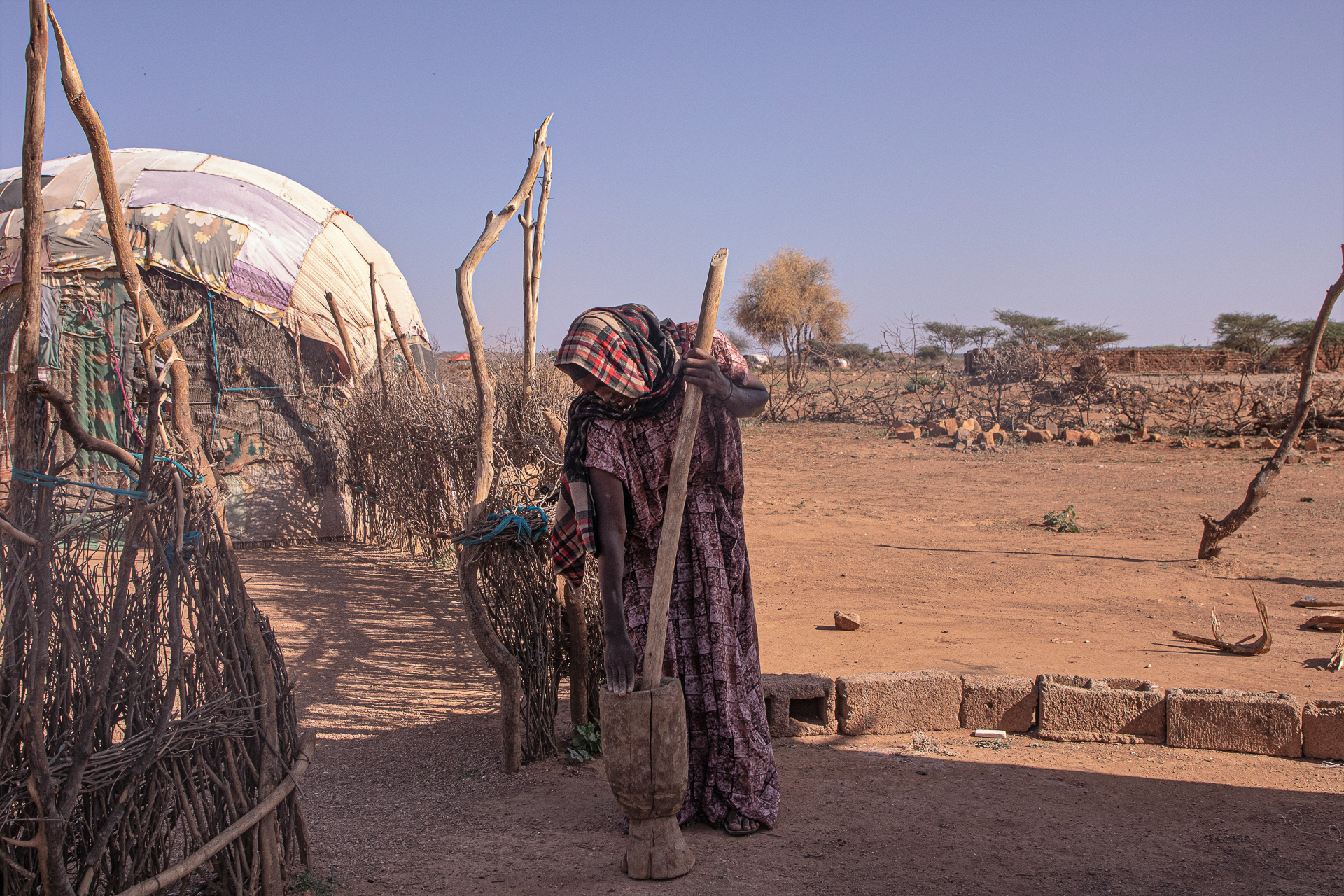 More than 342,000 drought-displaced people in the Somali region are in dire need of assistance. Photo: IOM/Rahel Negussie

Halimo and Mohammed are among the more than 342,000 drought-displaced people in the Somali region in dire need of immediate food assistance and livelihoods support, as well as water, shelter, health and essential relief items. Aid agencies expect the drought to continue exacerbating humanitarian needs well into 2023.

The International Organization for Migration (IOM) has been providing multi-purpose cash transfer assistance to drought-affected people in Garbo, Nogob Zone, Somali region, to mitigate the impact of the drought and help them generate an income to support their families. Each of the nearly 2,000 households displaced across 18 villages in Garbo has received the equivalent of USD 167.

Beneficiaries were selected based on vulnerability, in coordination with the Government of Ethiopia and the Disaster Risk Management Office in the woreda (district). The distribution was conducted in consultation with the national cash working group and local authorities, while cash feasibility and market assessments were carried out to identify priority needs, preferences and the cost of essential items where people were based. 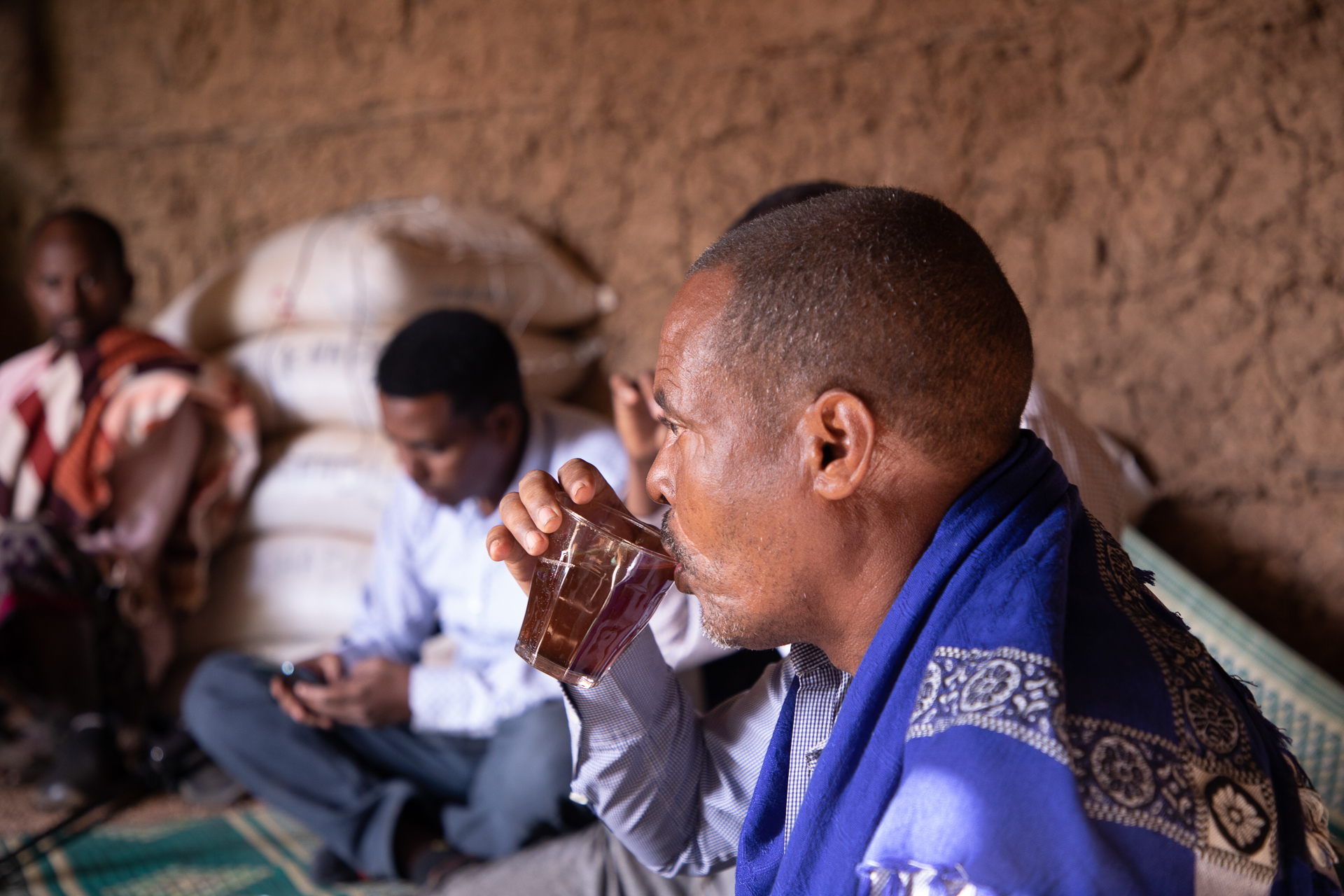 Both Halimo and Mohammed have since developed income-generating activities to help them support their families. Mohammed has opened a tea kiosk which he runs with the help of his daughter and, thanks to his new income, he is finally able to support his family.

IOM uses cash-based initiatives (CBI) as part of its humanitarian programming to support results that go beyond humanitarian priorities, and which can contribute to long-term development processes. CBI may have advantages, such as reduced response time, lower costs, and transfer of skills, and give recipients the opportunity to make decisions based on their own needs and preferences.

Halimo used to carry a jerry can on her back to deliver water, which meant she could only deliver a few per day. She bought a donkey and additional jerry cans with the support she received which have helped bolster her water vending business. 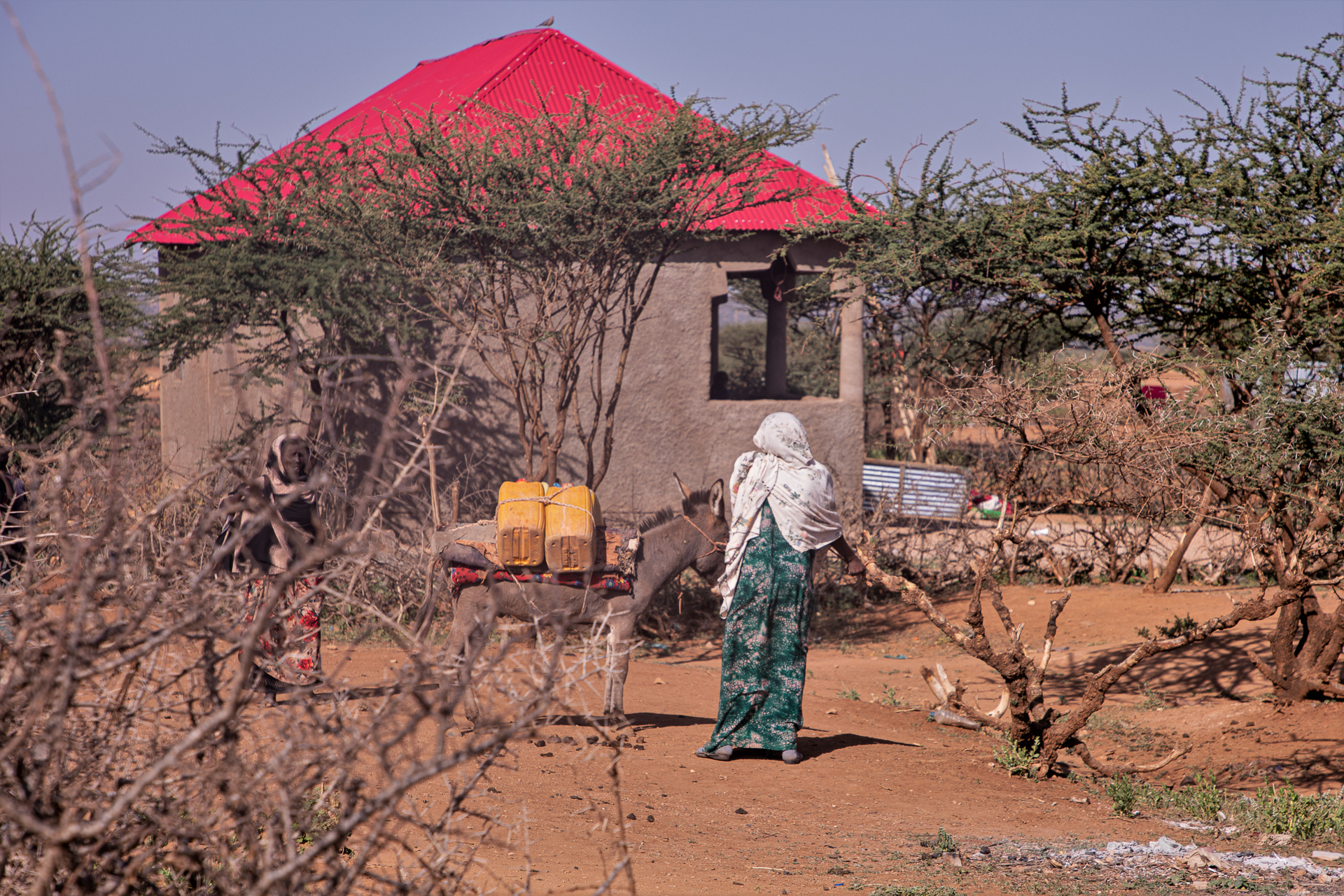 Using the support she received, Halimo has bought a donkey and additional jerry cans which have helped bolster her water vending business. Photo: IOM/Rahel Negussie

Cash-based assistance for drought-affected people has been possible so far thanks to the Central Emergency Response Fund (CERF). In 2022, IOM supported an estimated 46,660 drought-affected individuals with multi-purpose cash assistance in Somali and Oromia regions.