Sainna lives in Gubio camp with his wife and seven children, the youngest of whom was born last February inside the camp. Photo: Sascha Pimentel/IOM

A Sunny Day in Gubio Camp

How Clean Energy is Bringing Relief to Conflict-Affected Nigeria

Maiduguri – It is nine o’clock and the sun is already beating down on Gubio camp, one of 63 sites hosting internally displaced people in Maiduguri, north-east Nigeria. March marks the end of the dry season, also known as harmattan, when much of the dusty winds from the Sahara cast a hazy shadow over the capital of Borno state for roughly three months, but not today.

In the middle of the camp, a water tower rises above rows of tarpaulin roofs. Sainna, a slender 35-year-old man, climbs atop the tower and gently pours a bucket of chlorine into two tanks, one spoonful at a time. And so, his daily routine begins.

Sainna lives in Gubio camp with his wife Maira and seven children, some of whom were born inside the camp.

In early 2014, the family fled their home in Gamboru, Ngala, when non-state armed groups stormed the village killing more than 300 residents, destroying houses and forcing people into displacement. Several other attacks involving improvised explosive devices have since followed.

In Gamboru, Sainna was a farmer, selling his vegetables in the local market where goods and traders from Nigeria and neighboring Cameroon converged.

“When Boko Haram came, we fled to Cameroon, from there we went to Chad and then to Niger. And then we arrived in Maiduguri,” he recalls. 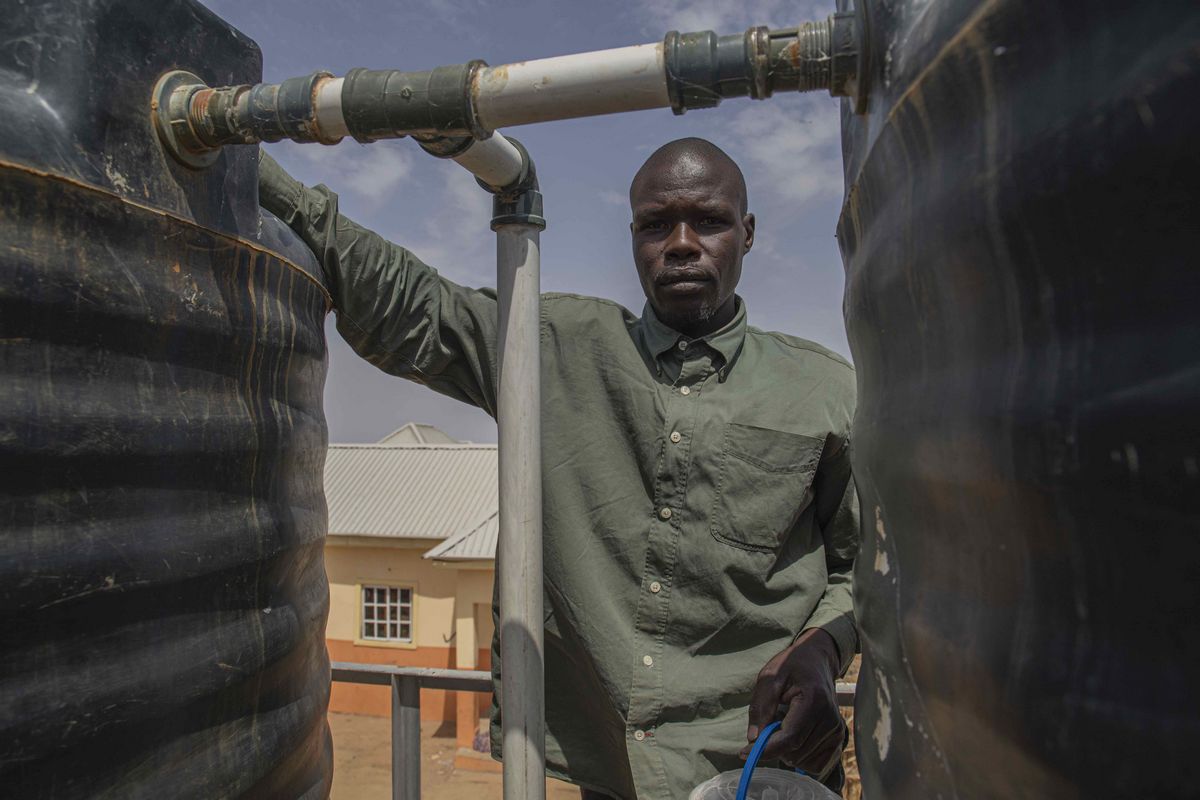 Sainna begins his daily routine by pouring chlorine in the tanks to ensure the water is purified. Photo: Sascha Pimentel/IOM

Sainna longs to return to Gamboru once security is restored. But in the meantime, he spends his days in Gubio taking care not only of his family but other IDPs as well. When he first arrived, IOM staff noticed he had a knack for carpentry, so he was hired to help repair damaged shelters.

Later, Sainna began to repair latrines and showers, and later took over the maintenance of the waterpoints in Gubio where IOM manages a borehole that provides safe and clean water to over 6,000 people.

Clean water provision is essential to maintain good hygiene inside camps and camp-like setttings. Communities routinely take part in sensitization sessions in camps where they learn about how handwashing prevents the outbreak of diseases like COVID-19.

IOM teams are now changing how they spread this information to camp residents, substituting the usual sessions which are held in large groups with door-to-door visits to limit the likelihood of community spread in the event of an outbreak in the camp.

Every day, 25,000 litres of water are consumed through four waterpoints and the average resident consumes 15 litres per day. These boreholes are powered by solar energy ensuring a cheap and steady supply of water for the community without negatively impacting the environment.

The facilities need to be monitored and cleaned regularly, making sure the dust does not accumulate on the solar panels, especially during harmattan.

“I wake up every morning before sunrise and walk over to the waterpoint to chlorinate the tanks… I must wait for the chlorine to purify the water, so I visit the latrines and showers and repair them if needed.

By the time I’m back to the borehole I open the tap and people start gathering to collect the water. I keep an eye on the panels and if they’re dusty I clean them with a soft cloth to avoid scratching them.” Sainna repeats this process two to three times a day.

Local committees of camp residents jointly maintain 34 latrines and 51 showers, keeping them in good condition. Above each block a sign reads mata and kamu or maza and konga, the words for woman and man in Hausa and Kanuri, respectively. 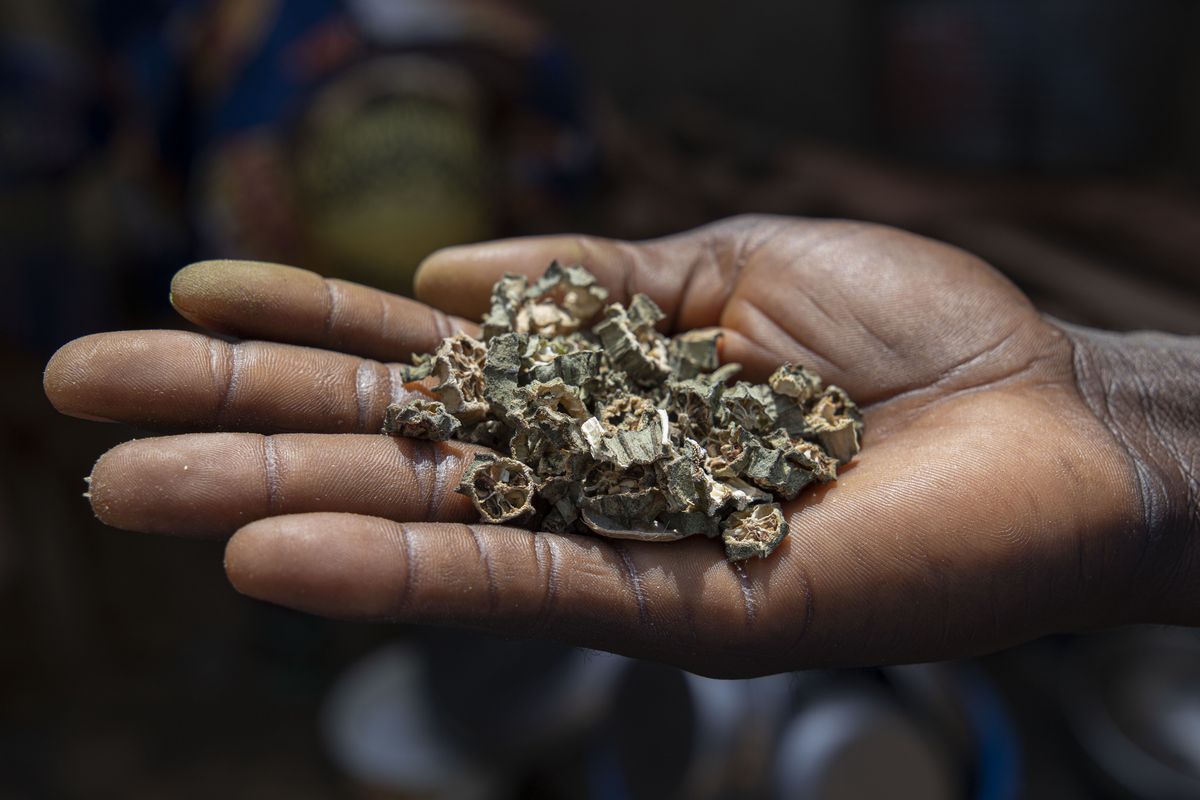 Food:Sainna shows the dried okra he grows using the spilled water from the nearby waterpoint. He shares his harvest with family and neighbors. Photo: Sascha Pimentel/IOM

“Over time I have seen the community take ownership of the facilities… Everybody makes sure that things like the water pump are not stolen or misused,” says Lema Konbe, IOM water, sanitation and hygiene (WASH) team leader.

When asked if it was difficult to learn how to run a solar-powered borehole, Sainna responds: “No, I picked it up quickly. It’s a very simple process, you don’t need fuel and there’s so much sun in Borno, these panels could be used anywhere.”

The only downside? “Well, there is no sun at night to keep powering the borehole,” he quips in Hausa, his native tongue.

Sainna has also received additional training and tools to carry out his work. He invites visitors into the concrete compound he shares with his wife and children and six other families to show where he stores the materials he uses for repairs. In the backyard, his wife Maira is crouched on the floor washing the pots and pans where today's meal will be served. She pulls a sachet of powder soap and applies it meticulously to each clattering utensil.

“Everyone in the community knows him because he’s always around making sure the borehole is working,” says Zarah, a mother of six who fled Gamboru three years ago. 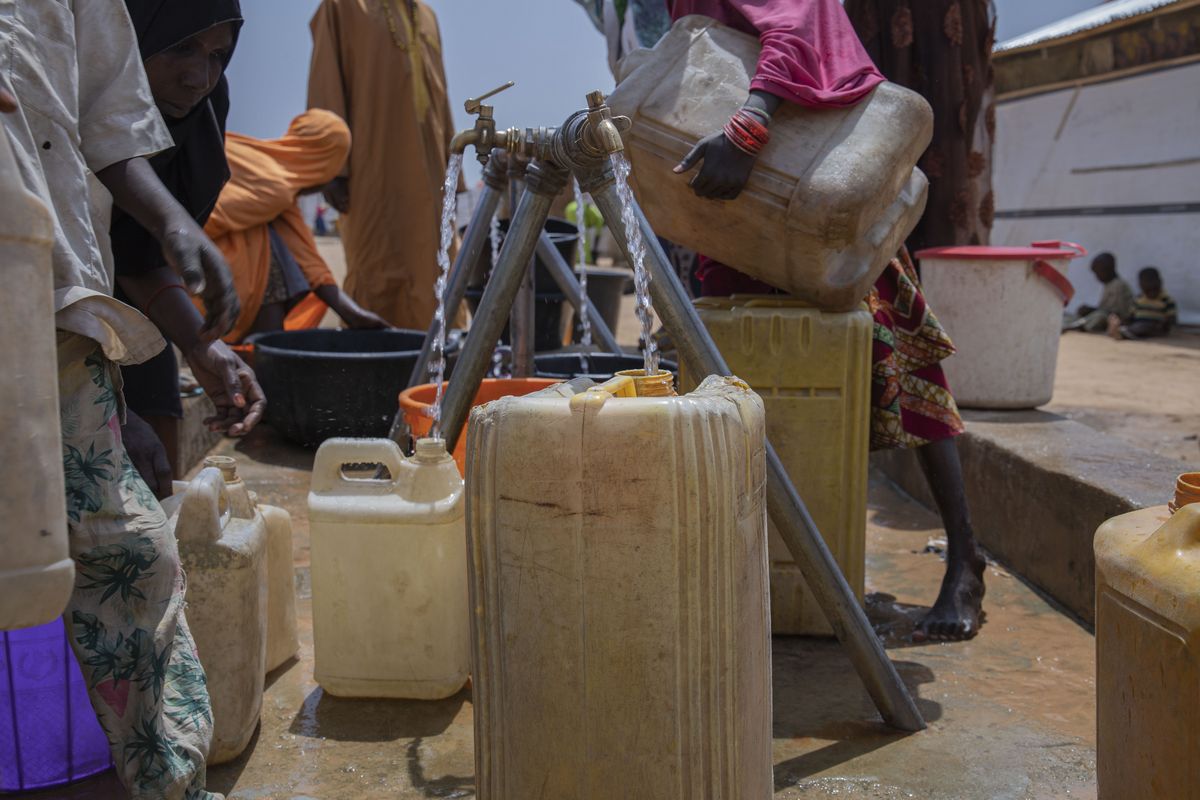 The solar-powered borehole provides water to more than 6,000 residents in the camp. Photo: Sascha Pimentel/IOM

Zarah, like many Gubio residents, used to fetch water outside the camp, and oftentimes returned empty-handed. “We would spend up to two days without water… It was hard but now I can cook, drink and wash my clothes whenever I need to,” she says as she lifts a bucket filled to the brim. As she rests the bucket on her head, she spills a few drops over her face and walks away.

When people line up their buckets and jerrycans at the waterpoints, some of the water is wasted. But Sainna recently came up with a plan. He dug a waterway that drains the unused water to a nearby garden where he grows onions, okra, bitter leaf and other local staples.

The garden, it seems, is a reminder of his home, and the promise that one day he will return to his former life, his farm and the market.

“When I return to Gamboru, I wish to go back to my farm, but I also want to keep working on the many skills I’ve learned over the years.”

Sainna has benefitted from the Cash for Work (CfW) mechanism. Through CfW community members help rehabilitate local infrastructure such as sanitation facilities, markets and classrooms. In 2019, 900 individuals benefitted from CfW activities in north-east Nigeria. 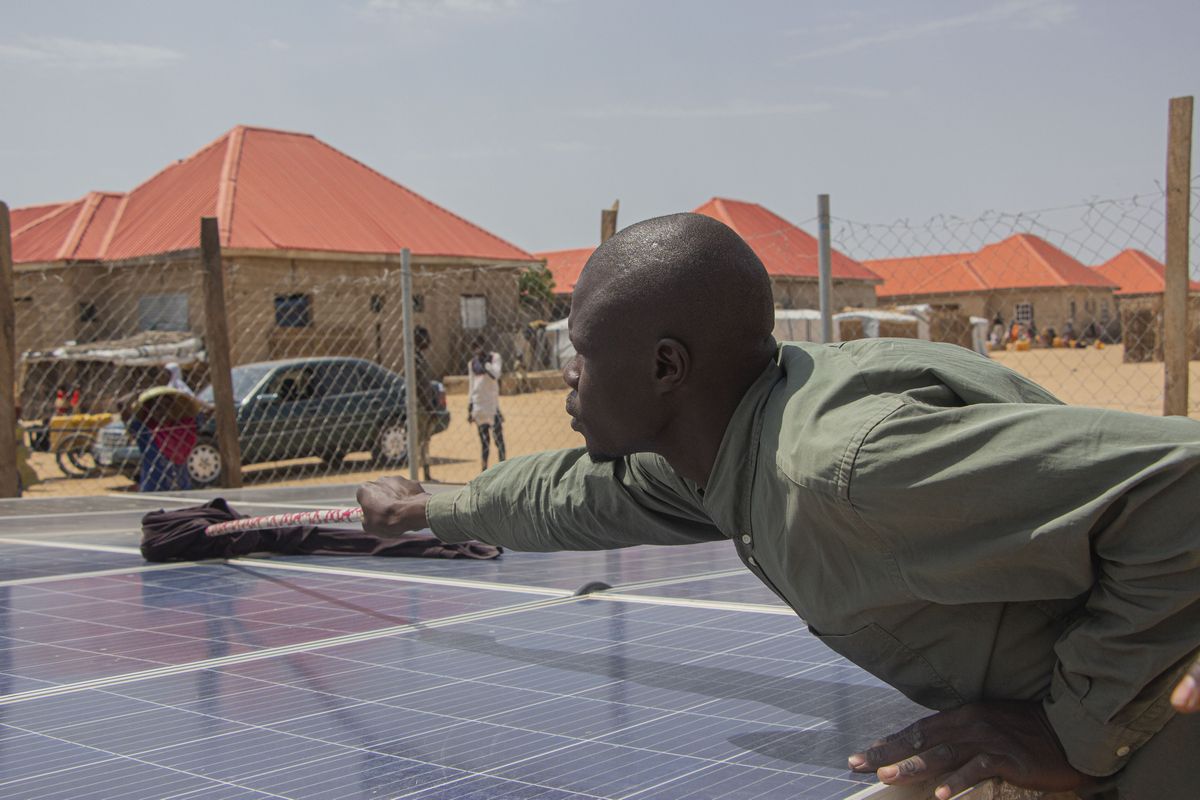 Everyday, Sainna cleans the solar panels to make sure they don’t accumulate dust carried by the harmattan. “The dust blocks the sunlight… I use a soft cloth so I don’t scratch the panels,” he says. Photo: Jorge Galindo/IOM

IOM also maintains 58 boreholes in Borno State. To promote environmentally sustainable interventions, while contributing to building resilience to climatic challenges, all IOM boreholes are solar-powered. This enables the water system to continuously supply water when access to the sites is not possible due to floods or security concerns. In 2019, 11 new IOM boreholes were drilled and 10 existing ones were rehabilitated and upgraded to solar power.

Last year, IOM reached 176,700 beneficiaries with WASH interventions, including 76,000 people assisted with water supply. This has been possible due to the generous contributions from SIDA, OFDA, The Nigeria Humanitarian Fund and the Republic of Korea.