Syrian Beekeeper Extracts Honey and Hope from Bees in Turkey

Gaziantep – The buzz of bees fills the air in the rural Turkish town of Islahiye, where a beekeeper closes the lid on a hive, bringing out a handful of honeycombs.

The 24-year-old takes off her beekeeping hat and emerges from the protective veil to take a breath, and a moment to remember her journey to this small farm.

Arife’s love for beekeeping arose a few years ago on a farm with her husband, Ali, in a village outside Aleppo where she raised a modest beehive.

“My husband was the one who introduced me to the beekeeping business when we were engaged in Syria. The business took me out of my comfort zone and made us feel that we had a shared life that we were working for together,” says Arife as she starts extracting honey and pouring it into a jar, while her two children watch the process with excitement.

“In the beginning, I thought it was strange when the bees would try to attack me, but later I began to really like it,” Arife recalls.

When the Syrian conflict reached their community and destroyed their home five years ago, however, they had no choice but to flee to Turkey – leaving the farm and their beloved hives behind.

They struggled to start their lives anew, tasked with learning a new language and trying to find work to sustain themselves.

Ali was working seasonal jobs that provided them with an unsteady income until last year when Arife found an opportunity to re-start her passion for beekeeping.

She joined an agriculture project supported by the International Organization for Migration (IOM) which trained more than 100 Syrians and local Turks in agriculture skills. The project also aimed to boost the farming industry in the region. 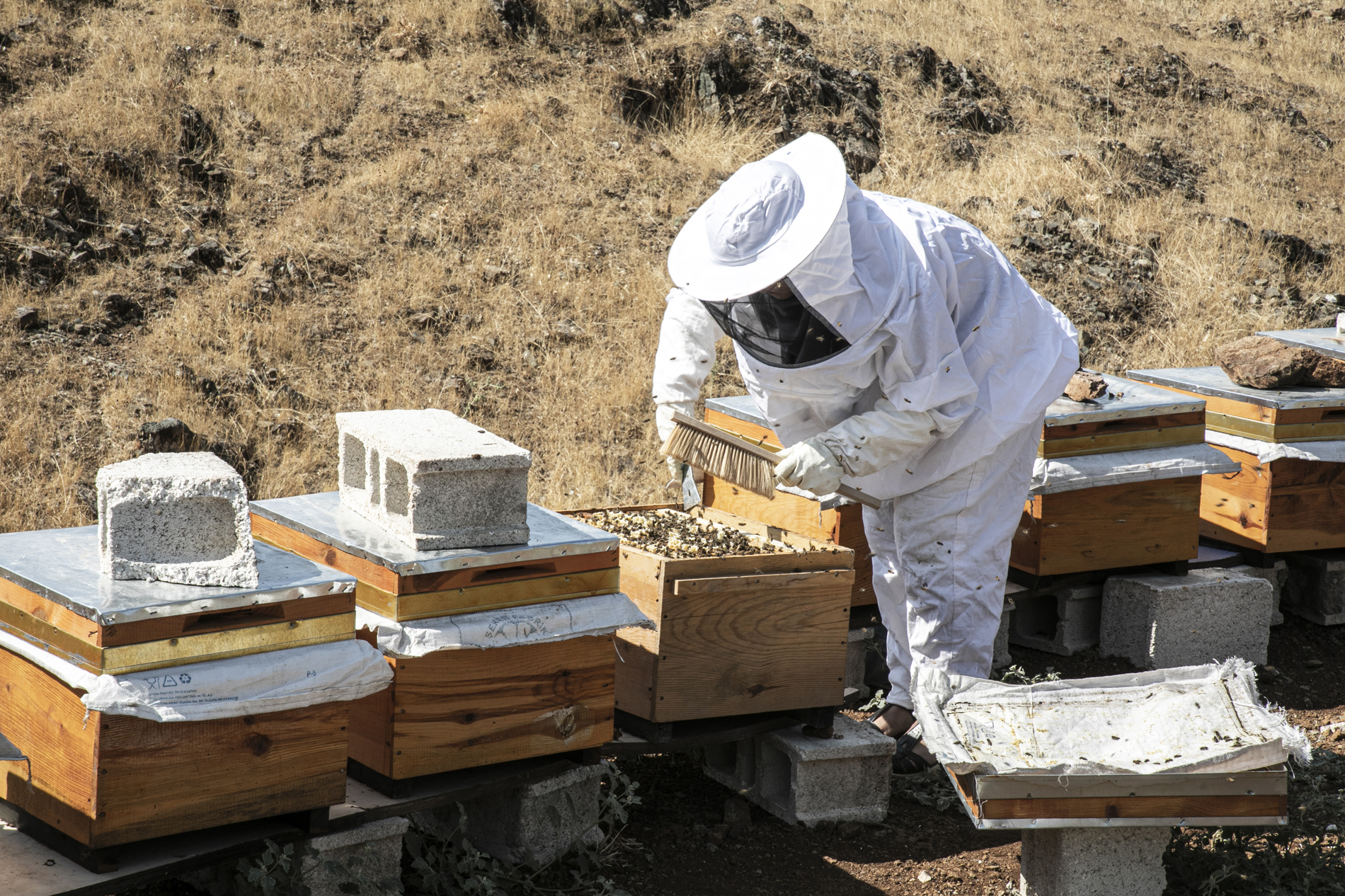 “My husband encouraged me to sign up for the project, so I did and later they called me. I was so happy.”

It was Arife’s first formal training in raising and tending to beehives. She later received nine beehives of her own and started a honey business. One of her instructors continued to mentor her to help her perfect her practice.

She was eventually able to grow her business and buy five more hives. To date, she has sold ten kilos of honey and donated a few more to people in need.

“I like the feeling when I wear the bee suit and see how the bees are flying, how honey is dripping into the jars. Some people admire me for being brave enough to work in this profession and others are surprised when they see a woman who is not afraid to work with bees,” she says.

“This job doesn’t require long hours, so I can take care of my children, Mahmoud and Amal, while also becoming self-reliant. It feels great!”

A total of 115 households received beehives from IOM to start their own honey businesses in 2019. This project was funded by the United States Bureau of Population, Refugees, and Migration (PRM).

IOM’s Global Crisis Response Platform provides an overview of IOM’s plans and funding requirements to respond to the evolving needs and aspirations of those impacted by, or at risk of, crisis and displacement in 2020 and beyond. The Platform is regularly updated as crises evolve and new situations emerge.