The Women Who
Move Mountains

One year after Cyclone Komen shattered rural Myanmar, women are building back their communities

In late July of 2015, tropical Cyclone Komen formed off the southern coast of Bangladesh. As Komen intensified in the Bay of Bengal, the people of Myanmar were unaware of the scale of destruction to come.

Komen brought an immense deluge of rain that caused flooding, the likes of which had not been seen in Myanmar since Cyclone Nargis hit in May 2008. Numerous villages across the country were left underwater, with residents' scant possessions swept away by forceful currents.

Some 1.6 million individuals were temporarily displaced from their homes by the disaster, and 132 lost their lives.In many areas, livestock were drowned and harvests were ruined for the season, leaving farmers with no source of income to provide for their families. This meant extra hardship for women, struggling to feed children.

In parts of Chin State, the rain would precipitate a series of violent landslides that would flatten houses, cover roads and disrupt services, leaving a trail of devastation where the only choice for many was to salvage what they could and prepare to start their lives again. Many are still, at the time of writing, rebuilding in new areas, where the risks of further landslides or flooding is less severe. 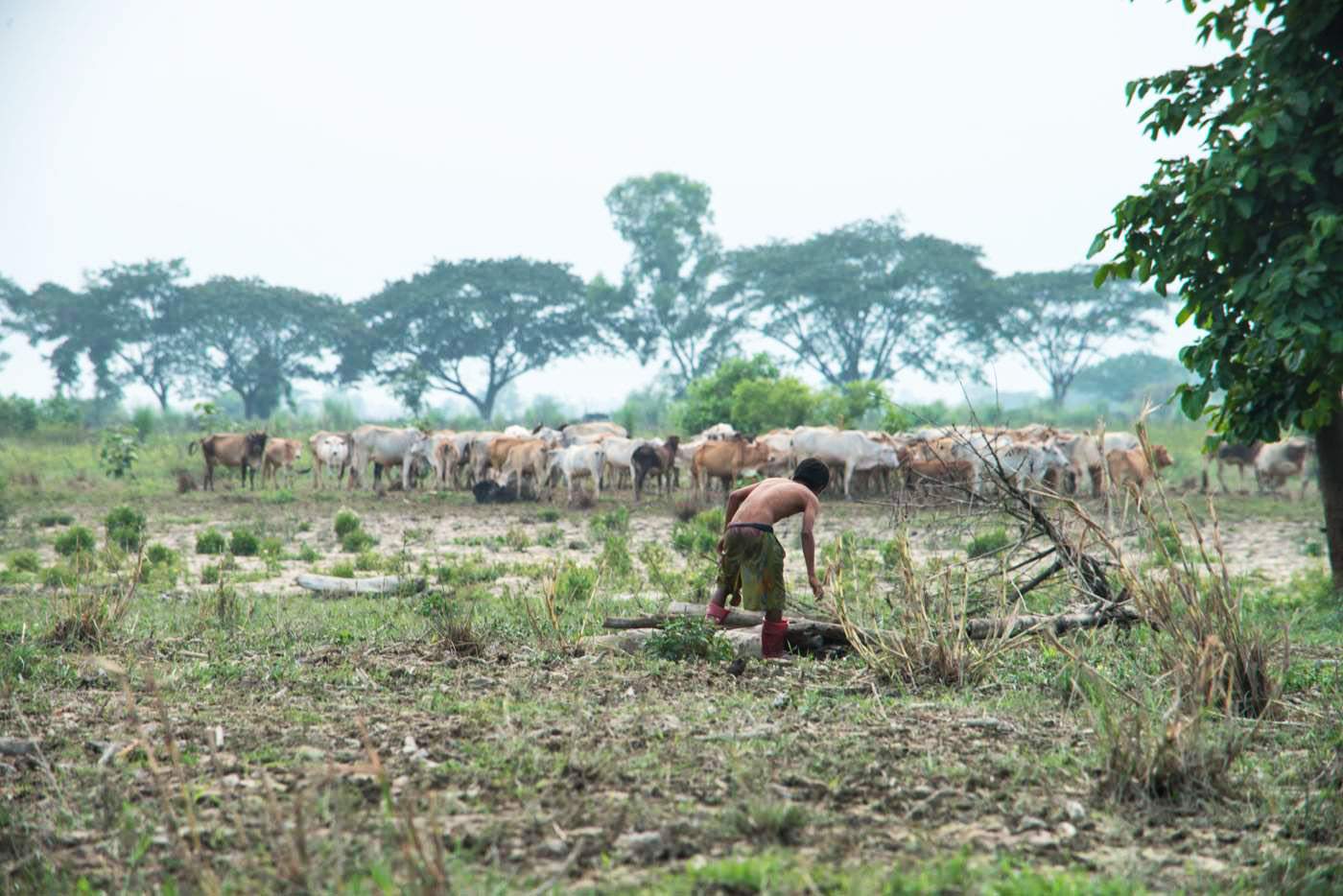 Chin State and Sagaing Region lie in the mountainous northwest of Myanmar, and both share a border with India.

Sagaing Region is partly located in Myanmar's dry zone and is a key agricultural region, also home to a range of industries. Water scarcity and sanitation are major concerns in some parts of the region, while other parts are prone to seasonal flooding.

Chin State remains the poorest and least developed area of Myanmar, with 73 per cent of Chin's 478,801 people living below the poverty line, according to the latest census data. Additionally, there is low literacy, inadequate access to healthcare, poor road infrastructure and limited power. Southern Chin State is home to some of the most isolated and remote communities in Myanmar.

"Of course I don't want to leave my homeland, but it is impossible to stay there. We lost our land due to landslides, but my son still has a job here, so at least we are safe now," says Daw Lawng Hngel. 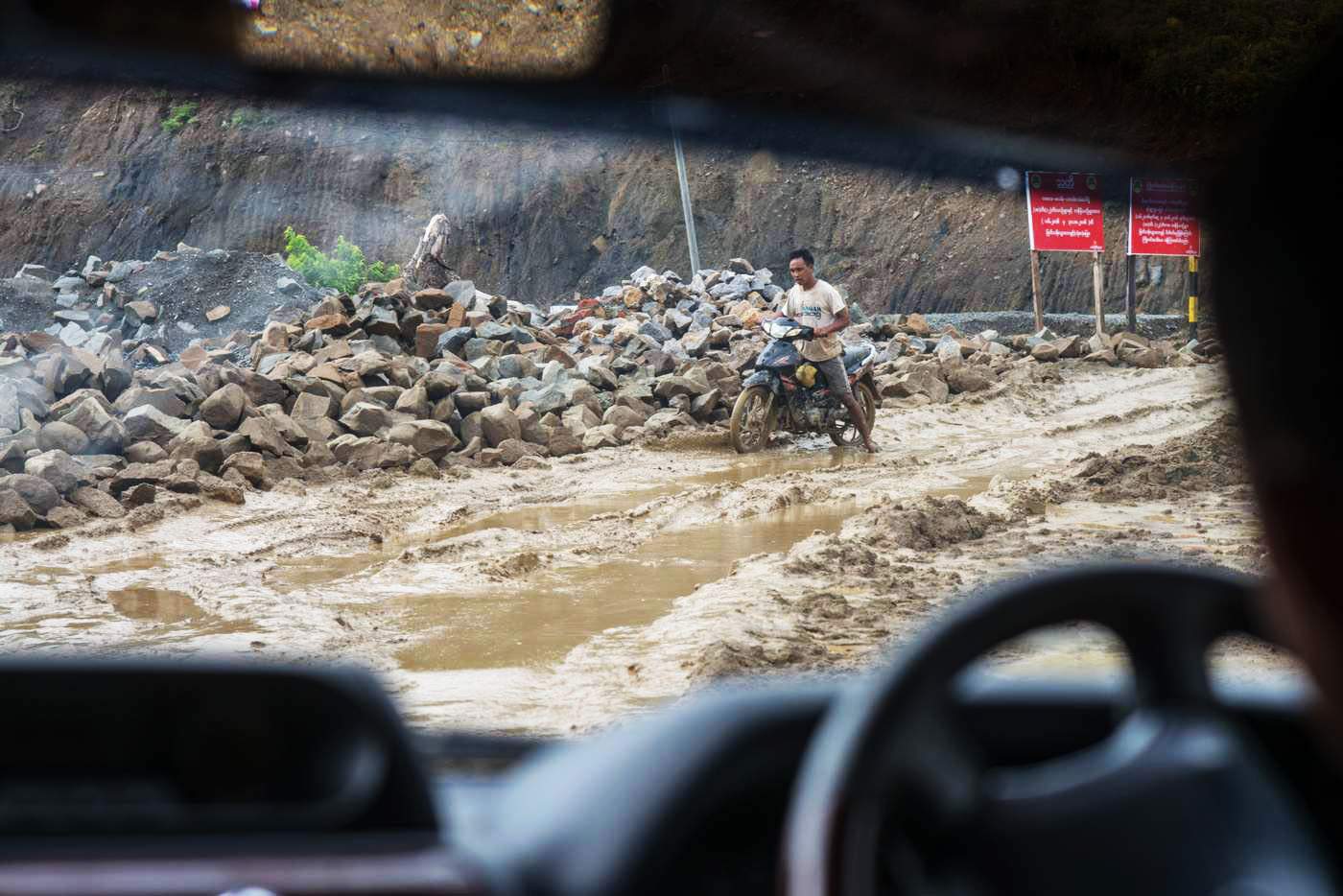 Poor roads and transportation is the norm in Chin State, Myanmar.

Women at the Forefront

When IOM spoke with communities in Chin State and Sagaing Region in late 2016, the women in these communities stood out as taking a lead role in the efforts to rebuild and restore their villages.

In Myanmar, women are largely under-represented in positions of power, and there are still deeply entrenched social inequities in the treatment of women and the opportunities available to them. Despite this, it was clear that during and after this time of crisis, the women interviewed play a significant role in keeping these communities together through their hard work and determination.

In both Sagaing Region and Chin State, many women are active in helping rebuild their villages by participating in cash-for-work programmes, where they are paid to engage in a number of development programmes.

Post-Komen development programmes run by IOM and partners are an effective way to engage people to participate in disaster and emergency recovery activities in villages which have been hard-hit by natural disasters.

There are limited options for villagers to resume their normal livelihoods straight away; thus, for many, there is dignity and pride in resuming work and in the common purpose of rebuilding and helping their communities.

Women are rebuilding the community in a variety of ways, including repairing, strengthening, relocating or rebuilding houses and key infrastructure, as well as improving services for affected villages.

The activities, which don't require specialist skills, are a welcome source of supplementary income while villages are still recovering. 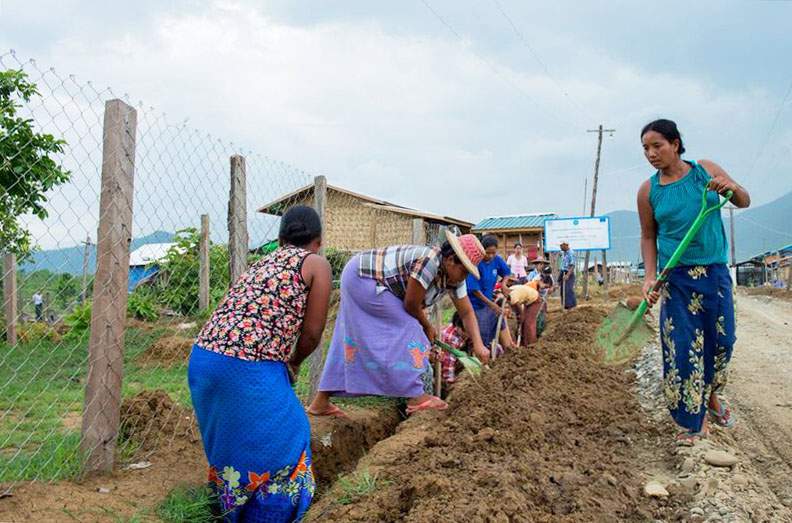 At the New Nat Nan village in Sagaing, a work crew made entirely of women, in their traditional longyis, works steadily throughout the day, shovelling load after load of dirt to ensure the drainage channels are complete. This offers some protection for when the next heavy rains hit their newly constructed village. In these communities, manual work is not the sole domain of men. 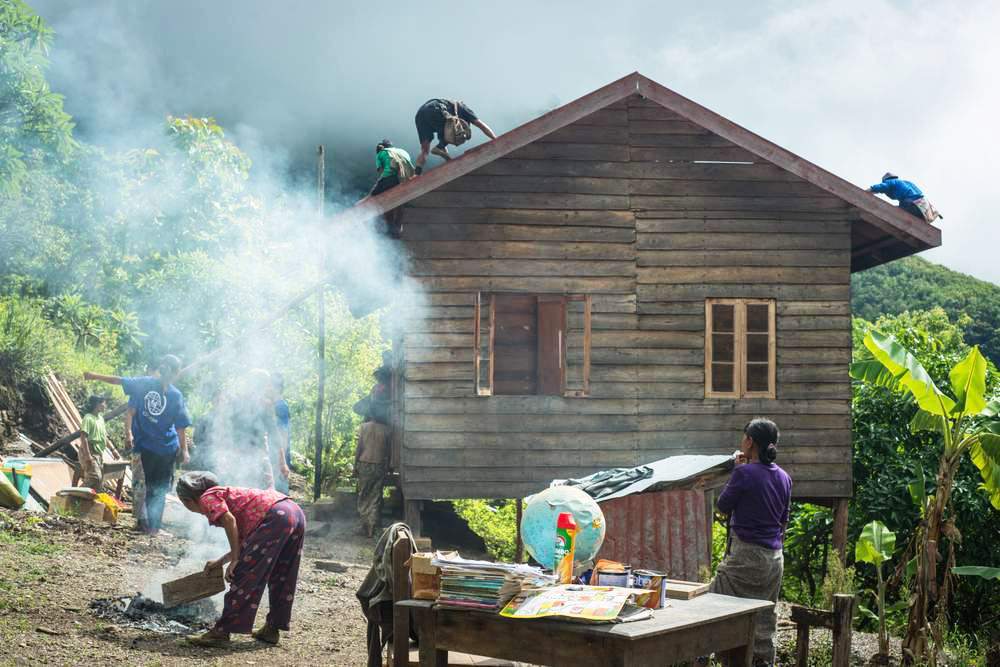 Building materials are salvaged from the school in Bai La Village, Chin State, in preparation for voluntary resettlement.

Re-establishing a sense of normality for the people who have been disrupted by the recurring natural disasters is central to the rebuilding efforts.

The women in villages across Sagaing Region and Chin State are involved in rebuilding their communities through the restoration of services and establishment of small services, along with being involved in much of the manual work needed.

In Chin State, where the mountainous terrain is notoriously prone to landslides, packing up and moving entire communities is not out of the ordinary. Voluntary resettlement schemes are in place to mitigate against the risk of further landslides.

While many villages have stood for generations and hold their own places in the hearts of the residents, in recent years the floods and landslides have shown their devastating power. It has proven too risky to remain living in these areas.

"Old Laizo village is 300 years old and is an important place for the Laizo ethnic group. Landslides made the village disappear, and the villagers left with almost nothing. But, I still have my three children and they are all in school now," says Ma Van Siang Hniem.

For the residents of Bai La Village, there is sadness in leaving a part of their history behind and in the struggle of having to start again. However, there is also a sense of emotional strength and resilience in the way that they deal with these changes.

Resuming their livelihoods following Tropical Cyclone Komen gives them back their pride and dignity, especially after taking an active role building back their communities.

"I have a small garden at my new house, and we received plant distributions from the Ministry of (Environmental Conservation and) Forestry and IOM. Agriculture is the main source of livelihood for Chin people,'' says Ma Nisung, 30, Chin State.

While seed distribution and agriculture is an important part of feeding the villages, the planting of seedlings can also help stop erosion and provide some protection against further landslides.

The picture shows a group psychosocial support session being conducted for villagers in Tedim, Chin State.

The psychological impact of losing homes, livelihoods or friends and family to natural disasters can be high, placing people under great stress. Support is offered to villagers in the hope of promoting psychological well-being in response to emergency situations.

At New Laizo Village, Chin State, the village school is now held in a temporary structure after their community was voluntarily relocated to avoid further landslides.

Construction of the new school is underway, but students happily attend their classes in the makeshift school despite the cold Chin State climate and the lack of modern teaching aids that one would find in many schools around the world. There are no laptops and state of the art sports facilities, yet the students here are keen to learn.

"We thank IOM, as it is not easy work relocating from our old village on a high Chin hill. With transportation assistance, villagers are getting paid for their contribution to build a shelter and school for students," says Daw Lal Fak Mawi, Teacher New Laizo Village, Falam, Chin State.

"Three generations of my family have attended this school. The school, together with the village, is over 100 years old,"says Daw Fam Thluai.

A year after tropical Cyclone Komen ripped a path of devastation across Myanmar, the flood waters have resided and the immediate landslides have stopped. The work to rebuild in Chin State and Sagaing Region is still ongoing.

Like the force of the flood water that eventually breaks the river banks, the gradual efforts of the communities here are starting to forge a new path. Through cumulative efforts, new villages are taking form, small businesses are starting up, children are attending schools and basic facilities and services are being restored.

Amidst the destruction, there is much to be celebrated about the determination and resilience of the communities who live here and their endeavor to resume their lives.