A displaced woman receives a water container during a distribution in a site in Ma'rib. Photo O. Headon IOM 2020

Sana’a – No matter where you are, clean water and safe sanitation are key to a healthy life. In Yemen, it has been six years into the conflict and around half of the population need some form of water, sanitation and hygiene (WASH) support. Many are exposed to dangerous diseases like cholera and COVID-19—both of which have had a devastating impact on the country’s population.

There are multiple risk factors that can impact vulnerable communities, as is the case for 4 million internally displaced Yemenis. In locations hosting high volumes of displaced people, the needs become even more magnified while resources are overstretched. This is particularly evident in Ma’rib, a relative haven for Yemen’s largest displaced population, despite nearby continuous clashes.

It has been over a year since fighting erupted along the outskirts of Ma’rib, Al Jawf and Sana’a governorates, causing the displacement of nearly 150,000 people mostly towards Ma’rib city and surrounding areas.

Within the last month or so, over 10,000 people were forced to flee areas in Sirwah close to the frontline, many of whom have been displaced for the third time or more and continue to live in fear of, once again, losing their supposed refuges and having to run.

Displacement sites in Ma’rib are overcrowded, with worryingly limited access to essential services like clean water supplies. The International Organization for Migration (IOM) provides comprehensive WASH support to 16 displacement sites across the governorate. 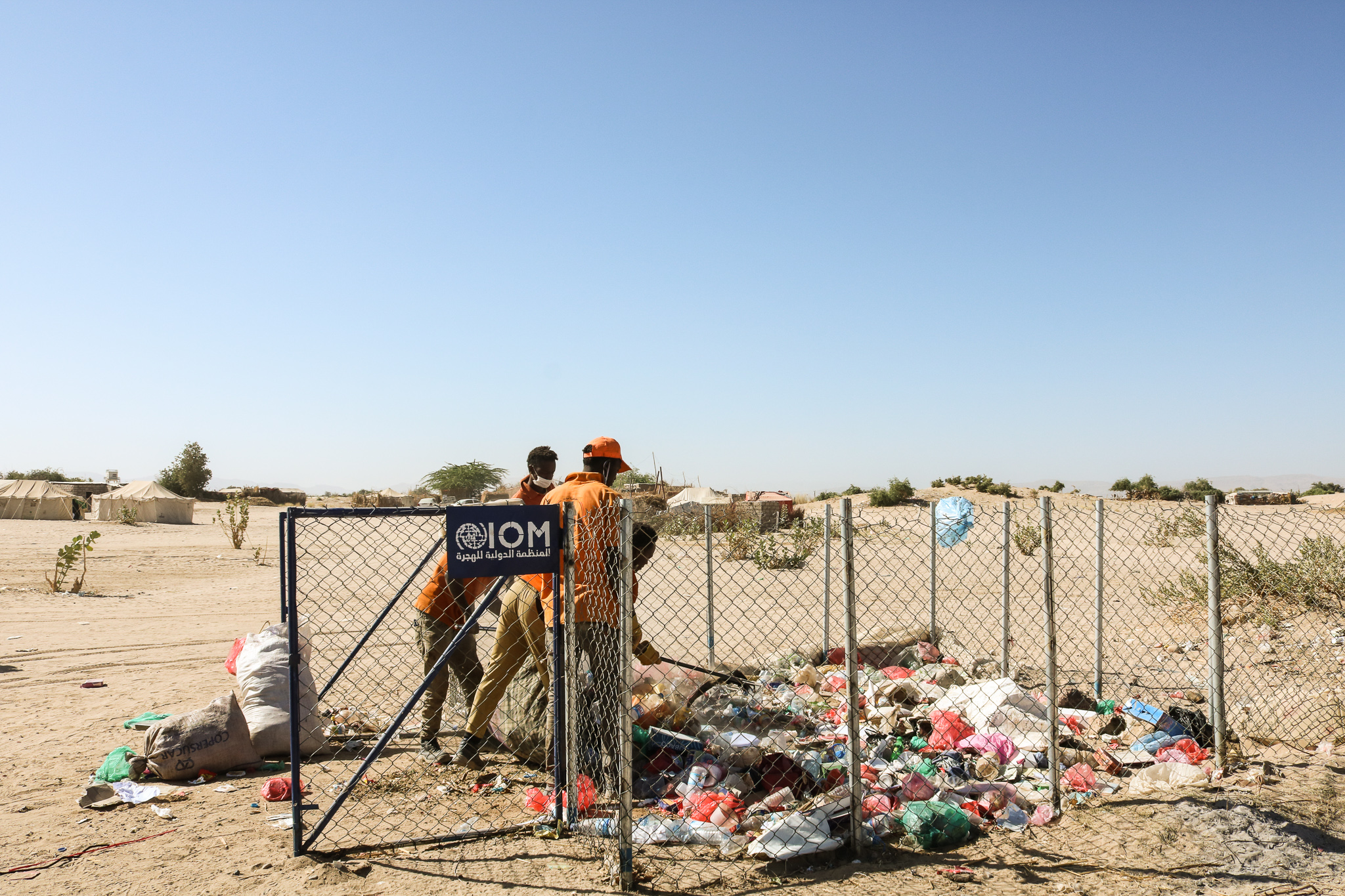 Waste collection process at an IOM-constructed point in Ma’rib

"We had a water network, but the supply was often interrupted because of old broken pipes,” said Hassan, a displaced person living in Maneen Al Hadad Displacement Site in Ma’rib’s Al Ashraf sub district.

“The pipes were rusty and so the system used to break down frequently. We were not able to easily pay for any maintenance from our own pockets, as families here live in poor conditions,” he added.

Due to the problems with the water network, Hassan’s family struggled to get enough water each day. Often, they were forced to travel long distances in search of working wells or required to pay large sums for purchasing and trucking water. Sometimes, they would be without water for several days, affecting the family’s health.

“It was difficult to fetch water and carry it back to the displacement site because of the long distance to a working water well,” recalled Safaa, a displaced woman in another displacement site in Ma’rib called Al Kuseef.

IOM rehabilitated the worn-out water network, extended pipes to the shelters that previously had no access to the network and installed a submersible pump and generator to guarantee a continuous flow. Over 5,830 families also received 500-litre tanks since January 2020, which allowed them to safely store water.

“It was very hard for us whenever our flow of water would be interrupted. We had no way of storing water for these emergencies. The storage tanks are a solution to our problems. Now, we are prepared for any possible future water shortages and we can also keep the water clean,” explained Hassan. 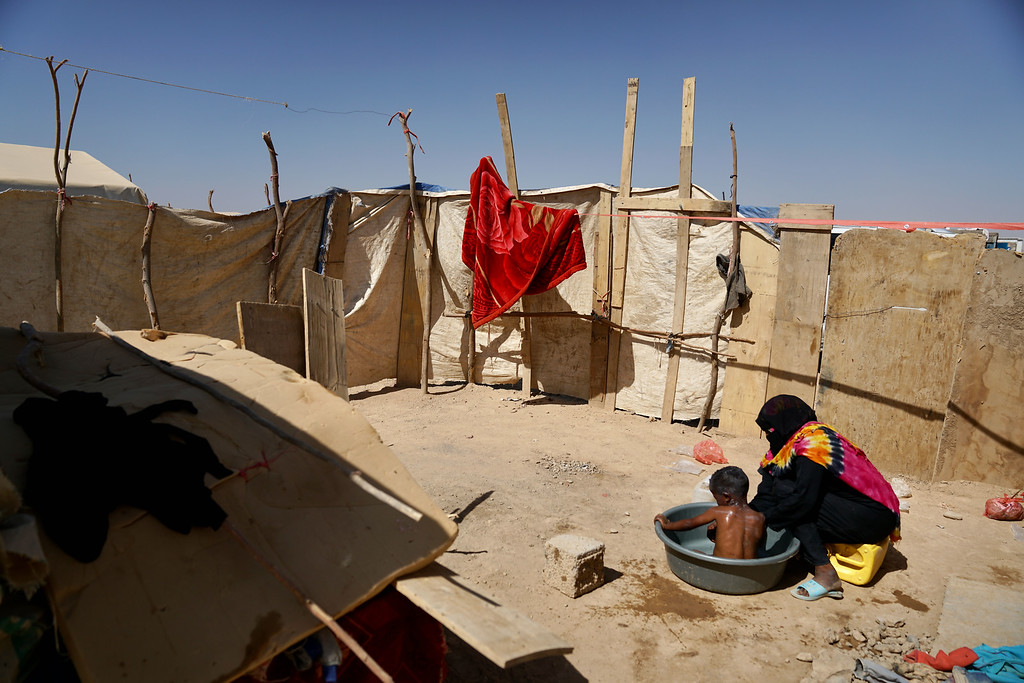 A displaced mother bathing her child at Al Jufainah site.  Photo by Giles Clarke for UNOCHA 2020

Four years ago, Yemen experienced the worst cholera outbreak in modern times, yet sanitation continues to be a major issue across the country, making humanitarians concerned about future outbreaks.

It is estimated that less than ten per cent of displaced people have access to a safe latrine. Lack of privacy, acute watery diarrhea and the spread of disease are some of the ordeals that displaced people—especially women and children who make up over 70 per cent of the population—face in the absence of a proper sanitation system.

IOM provided displaced families with cash to build their own latrines, using materials from local markets. Around 1,450 latrines have been constructed by the families so far. The Organization also trained the families in skills needed to safely build a latrine according to  Sphere´s Humanitarian Standards.

Already, the positive results of an improved sanitation system have become evident for the displaced community.

“Now that we have our own latrines, we feel comfortable. We used to practice open defecation, which was causing diseases,” said Abdallah Ali, a member of the Muhamasheen community, a marginalized ethnic group in Yemen that often lives in makeshift shelters alongside displaced people. Abdallah Ali and his family live in Al Qasha’a Displacement Site, Ma’rib.

But in Maneen Al Hadad Displacement Site, where Hassan lives, the displaced community had another sanitation problem.

“Because of open  cesspits, we were suffering greatly from the spread of unpleasant odours, mosquitoes and flies,” explained Abdalkreem, Hassan’s neighbour and an environmental manager at the site.

The open pits scattered around the site caused concern for the residents. Families would not allow their children to go out to play, fearing that they might fall into one. Even grown-ups were afraid of going out at night for the same reason.

As part of its intervention, IOM helped over 300 displaced families to cover their open pits and feel safer.

“We feel more secure and less worried about allowing our children to play outside, and the unpleasant odours that filled the air have subsided. Luckily, this also got rid of one of the sources of flies and mosquitoes,” stated Abdalkreem in relief. 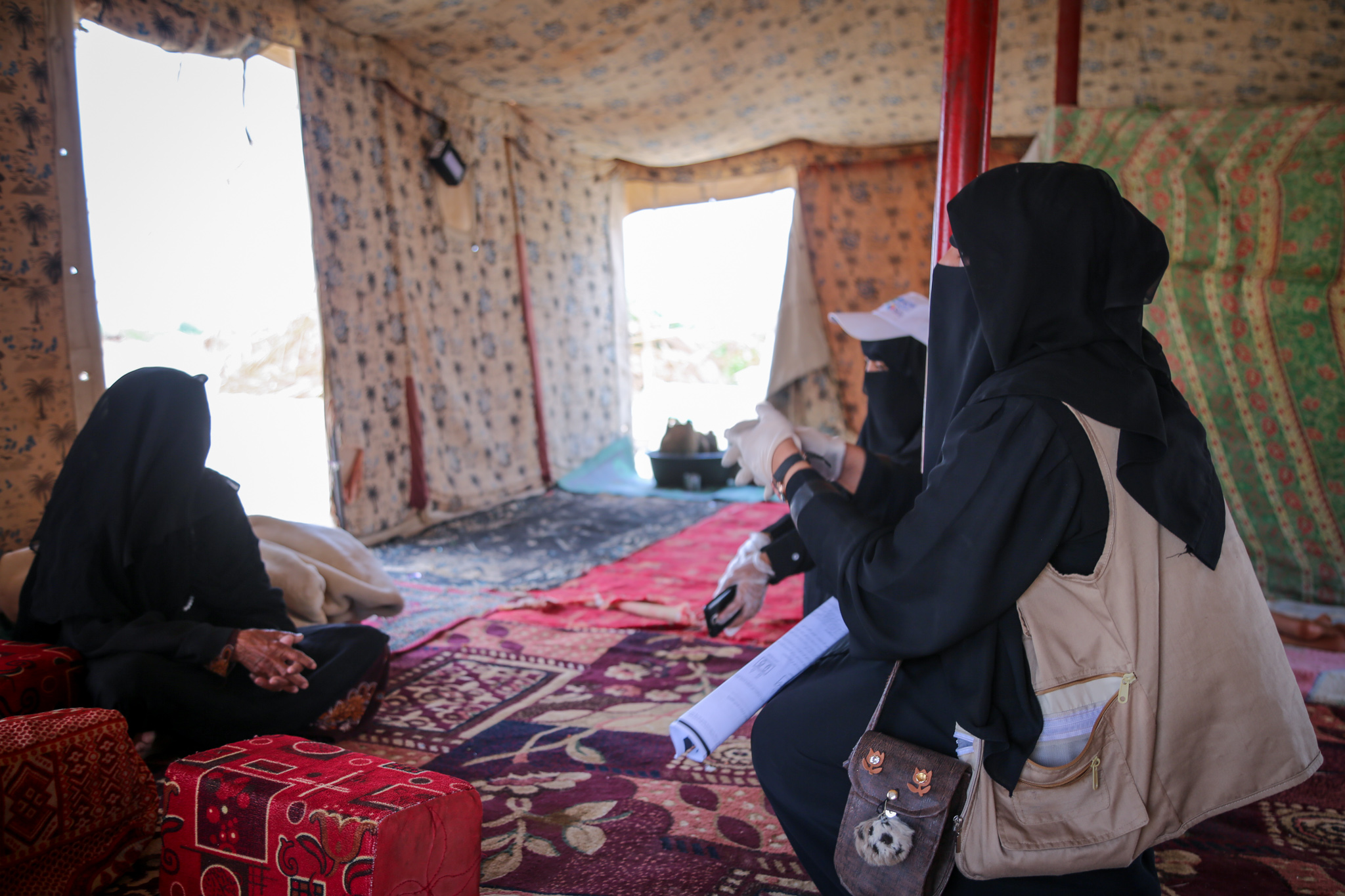 “Before the cleaning campaign, garbage was spread throughout the site, and mosquitoes were everywhere spreading disease,” said Mohammed Al Azma, a displaced community representative living in Al Kuseef Site.

In many displacement sites, garbage would pile up and be thrown in random locations. This accumulation of solid waste was a source of anxiety for displaced families in Ma’rib, who worried about their children’s health. Heavy rains and flash floods made the situation even worse during the rainy season.

The committees also supported IOM to provide hygiene promotions on solid waste management to the community. Once a site is cleaned, IOM starts the regular waste collection with the support of authorities and committees through mobilizing the community to conduct a regular mini cleaning campaign.

“The cleaning campaign reduced the spread of flies and decreased infection and fever among our community. We hope that IOM continues to support our garbage collection," said Nusseibeh in Al Kuseef Site. 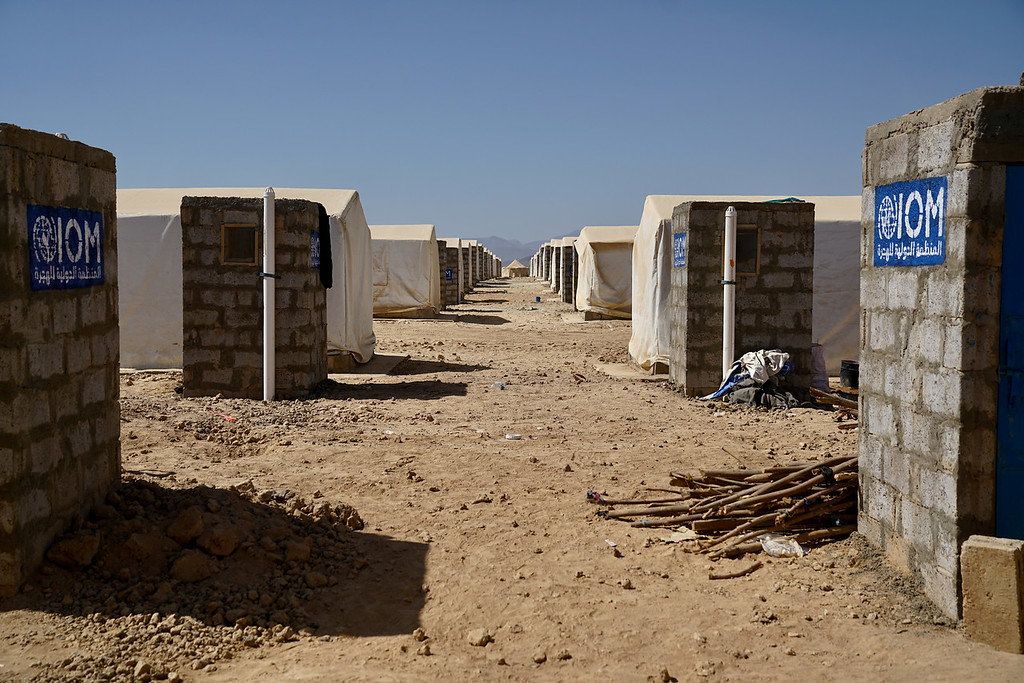 Along with the cleaning campaign, IOM also carried out hygiene and water management awareness sessions to teach people how to stay healthy by using and storing water properly, following correct hygiene practices and keeping their sites clean. These messages are vital to fighting COVID-19 and cholera.

“After the awareness sessions, we learned safe and healthy ways to transport and store water, as well as  correct handwashing methods to limit the spread of communicable disease and combat the transmission of dangerous viruses,” explained Abdalkreem, the environmental manager of Maneen Al Hadad Site.

Under the same project and to supplement the awareness-raising campaigns, IOM distributed nearly 7,870 hygiene kits, 696,000 pieces of soap and 70,000 long-lasting insecticidal nets to the displaced communities in Ma’rib.

This project is funded by EU Humanitarian Aid.