Sticking together for survival

Bhekani Ncube (back) and Admire Makondo.

Most days, driving through the upmarket northern Johannesburg suburb of Illovo, you’re likely to see him sitting in his wheelchair at a traffic light on Corlett Drive. On Sundays, he’ll be sitting a block away on the traffic circle on North Street.

It’s also likely that you will drive past him and barely pay him any attention, maybe avoiding eye contact or pretending you don’t see him. But he’ll be there, sitting in the rain and in the sun, a smile and a friendly wave always at the ready.

For him, it’s about making enough money to survive another day. And for most of his adult life, that is exactly what Admire Makondo, 40, has been doing — surviving.

Some days he’ll be sitting by himself, on other days a tall, wiry man will be with him, hovering in the background. This is Makondo’s friend, “brother” and roommate, Bhekani Ncube, 36. The two have been inseparable since meeting in the town of Musina in Limpopo more than a decade ago, each playing their part in looking after the other.

“So here now, I can’t work. I go and beg there in Illovo. When it is a Sunday, I sit there by the circle. But during the week, I am by the traffic light. But I don’t go every day. I’ll start from Friday, Saturday, Sunday. Monday it gets worse, so maybe Tuesday and Wednesday I will rest,” Makondo explained his routine.

He is unable to fully explain the nature of his disabilities. He has a lump on his back that resembles kyphosis (colloquially known as roundback), as well as physical problems with his hands and legs. His left arm is visibly weak, and he doesn’t have a full range of movement in it. He has big calluses on the tops of his feet and knees, because he moves himself along on his hands and knees when he is not using his wheelchair. This is how he gets around in the dark corridors of the downtown building where he lives. In addition, Makondo has diabetes.

He decided to move to South Africa in 2009 following political upheaval in Zimbabwe at the time, and because he had been diagnosed with diabetes, and was unable to receive the necessary medication. “I’ve been here from 2009 until now. In 2008, I was staying with my father. When there was persecution because of the elections, I decided to come here because there was no food. And sometimes I was sick, because I have diabetes. I need to inject twice a day,” Makondo said. 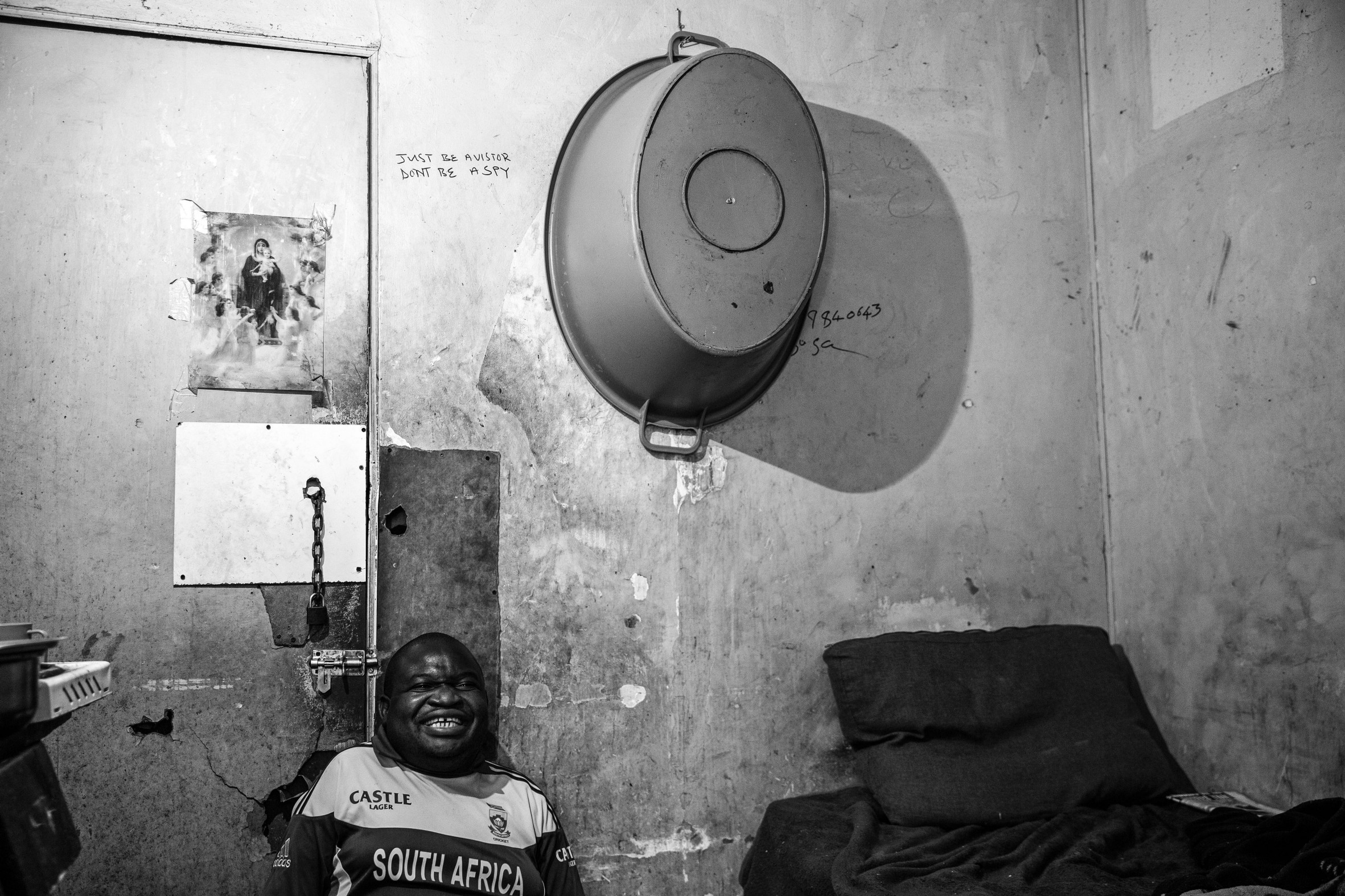 Admire in his room.

An animated man, dressed in a Proteas cricket shirt and black shorts, he gestures often when he speaks. The gestures increase as his voice rises when he tells a story. “When I was in Zim and I got sick, I didn’t take the medicine. I went to the clinic and they said I had sugar (diabetes), but you can’t get proper medication there. So I went to Musina and I stayed for one year,” he said.

It was in Musina that Makondo and Ncube met and formed the friendship that would become crucial to the survival of both of them. From the moment they met, they decided to stick together and look out for each other. After about a year of living in Musina, the two decided to move to Johannesburg where they share a single bedroom in an inner-city building with another man.

The room is cramped, with a small single bed tucked in the corner and a washing tub hanging from the wall. Makondo sleeps on the bed, while Ncube and their other roommate sleep on the floor. The three men split the rent of ZAR 1,600 (USD 105) a month among them. 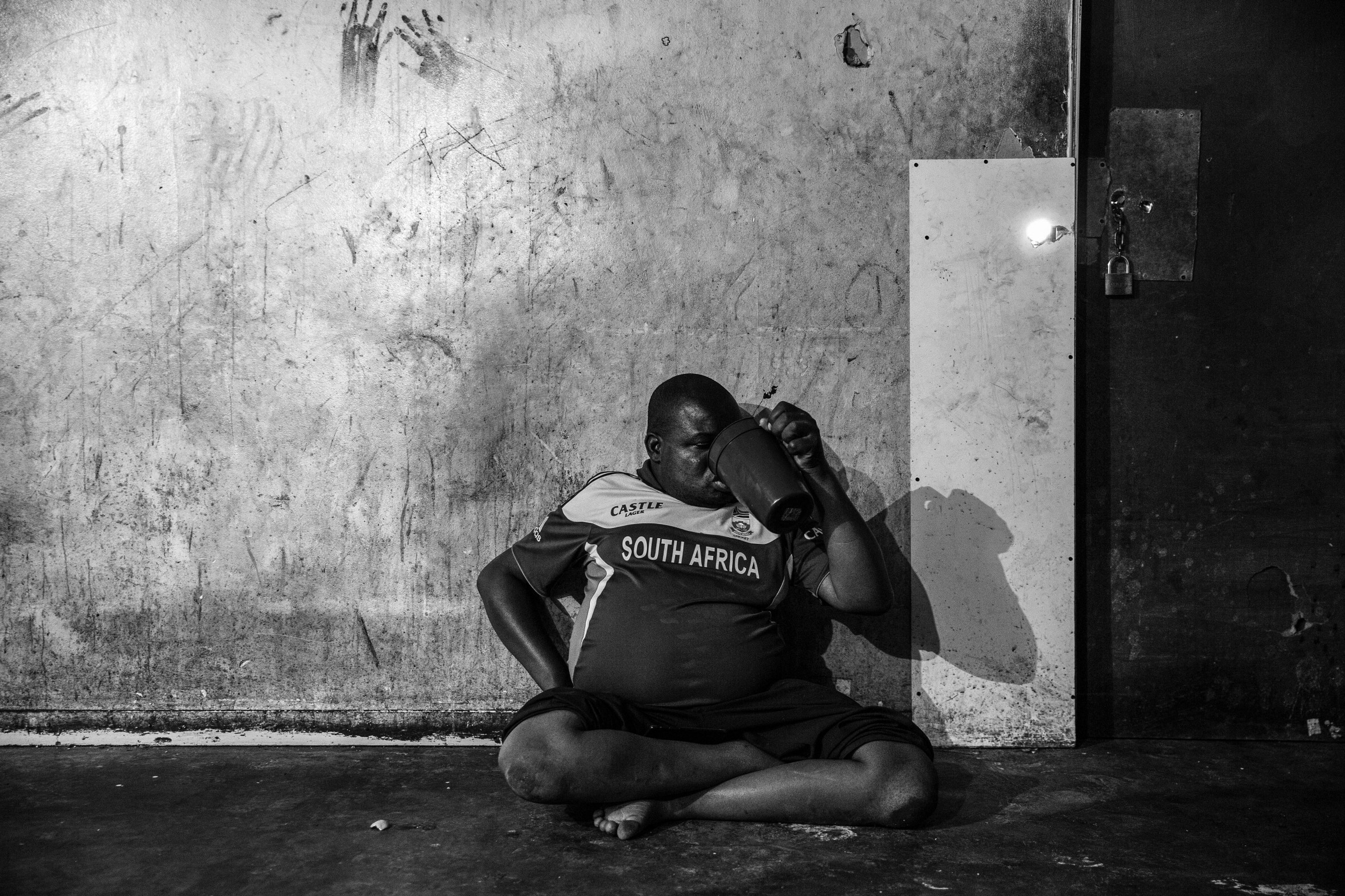 “We met here [in South Africa]. From that time in Musina until here, we didn’t separate. Even my relatives, they know Bhekani is staying with me,” Makondo said.

With Makondo unable to work, and Ncube not finding much work other than occasional piece jobs, the two stick together while Makondo begs on the streets of Johannesburg.

Matthew Wilhelm-Solomon, a lecturer in anthropology at the University of the Witwatersrand and an associate researcher of the Migration and Health Project Southern Africa, has done extensive research on blind and disabled migrants living in the Johannesburg inner city. 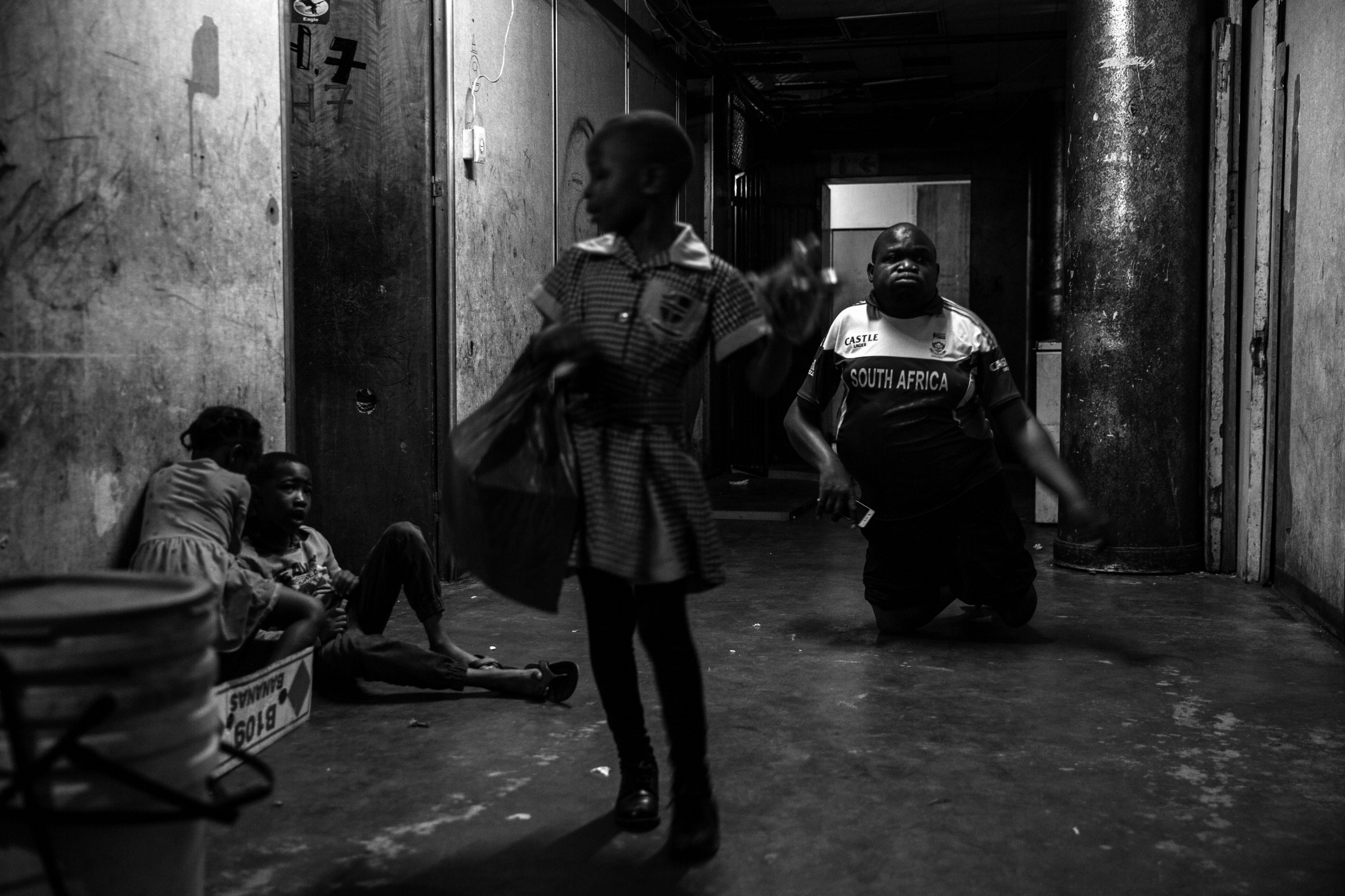 He said it was common for some of these migrants and their helpers or assistants to travel as far as Lenasia in the south of Johannesburg or Springs on the East Rand to beg on the streets.

Migrants are generally excluded from many social services and job creation initiatives, but Wilhelm-Solomon said there are even fewer opportunities for those who are blind or have disabilities. 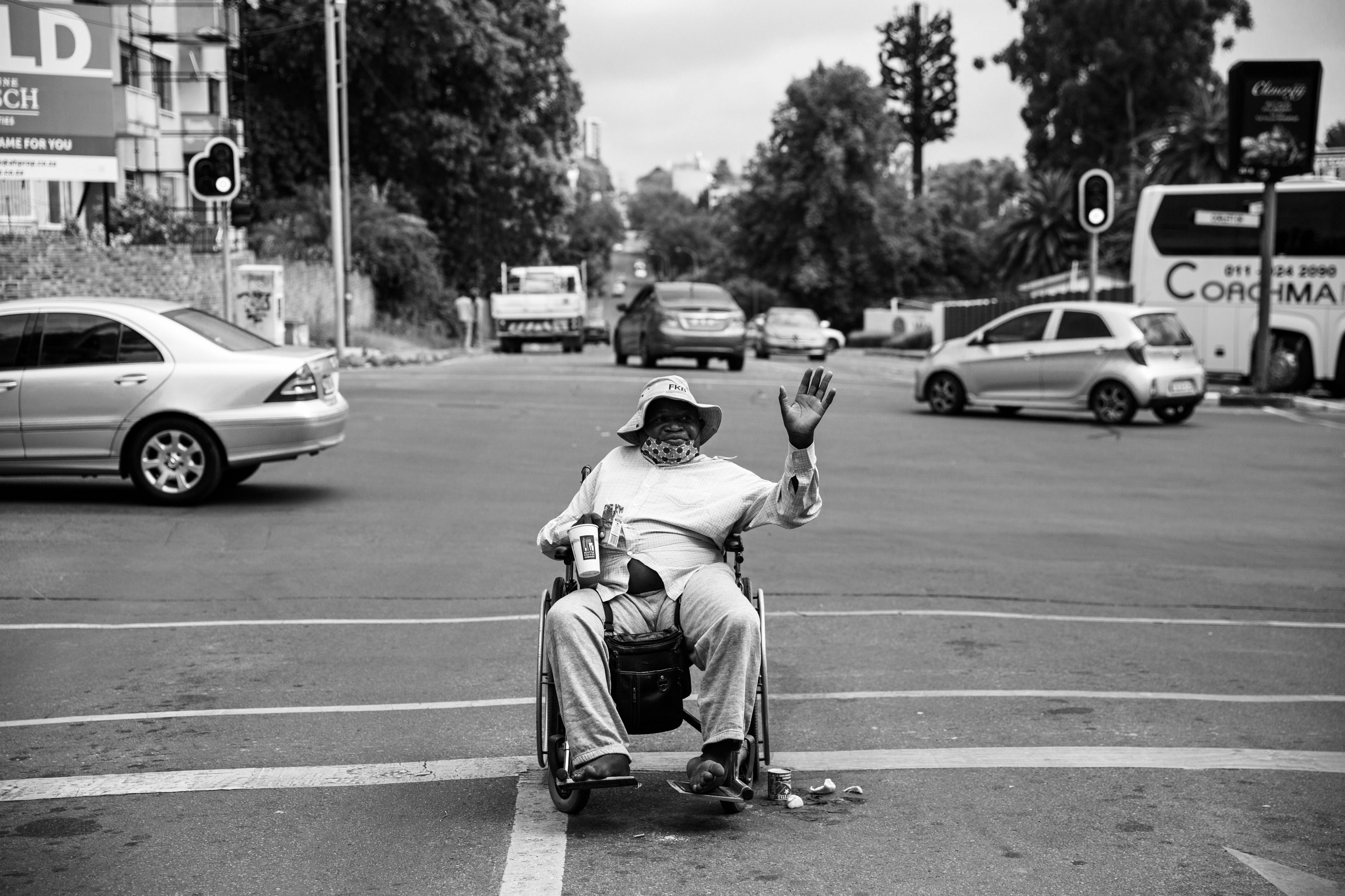 “Many blind and disabled migrants who are well educated, have high school certificates, artisanal training, sometimes even tertiary degrees and have worked at decent jobs or had small businesses in Zimbabwe, are forced into begging in Johannesburg.

“It’s extremely difficult to renew asylum-seeking documents which allow one to work legally, it’s difficult to validate certificates, and there is very little support for them to access formal employment or support for income-generating activities,” he said.

While Ncube takes more responsibility for the physical wellbeing and safety of his friend and himself, Makondo mostly takes care of them financially, sharing any money he might earn from a day’s begging. 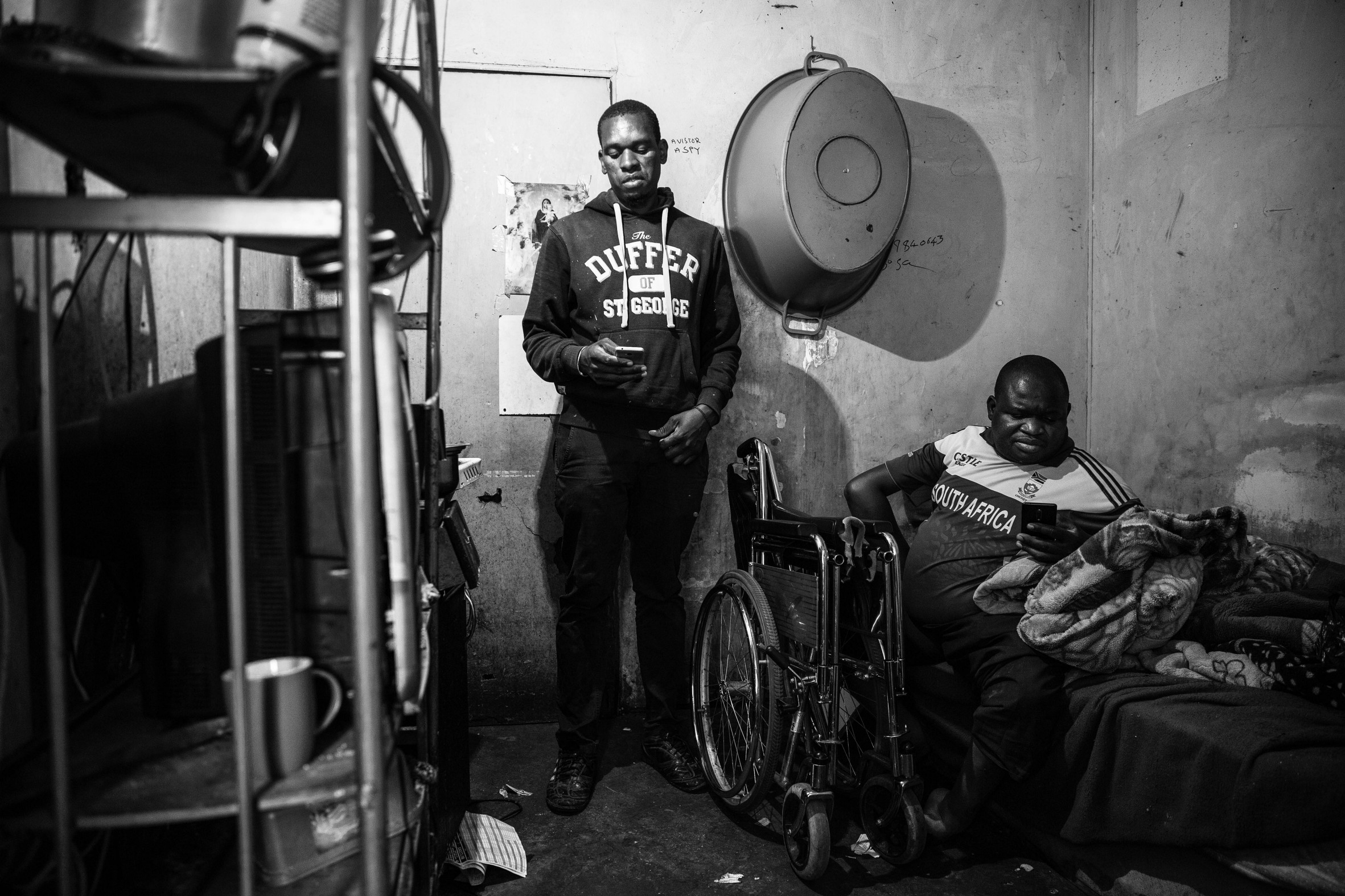 “It’s difficult to get around when I am on my own. That’s why he helps,” Makondo said, pointing at Ncube. “This wheelchair, I will fold it smaller, and then I will get inside the public transport. That is how we get there.”

Relationships such as the one between Makondo and Ncube are mostly formed out of mutual care, Wilhelm-Solomon said. “The assistants are often family members, but frequently not. There is often a relationship of assistance and mutual care that develops and the helpers also benefit, because generally the agreement is that the money is shared in the case of begging. I’m not saying there aren’t cases of exploitation — there likely are — but in my experience it’s often a reciprocal relationship.”

Even though it’s a struggle just to get by on a daily and monthly basis, Makondo still tries to send money home to his family who stayed behind in Zimbabwe. “If I get anything, even if it is small, I just take a little for myself,” he said. “I will try and save up and send back a little bit. I have a young brother, he is in Mpumalanga, and he also sends money back. We are trying.” 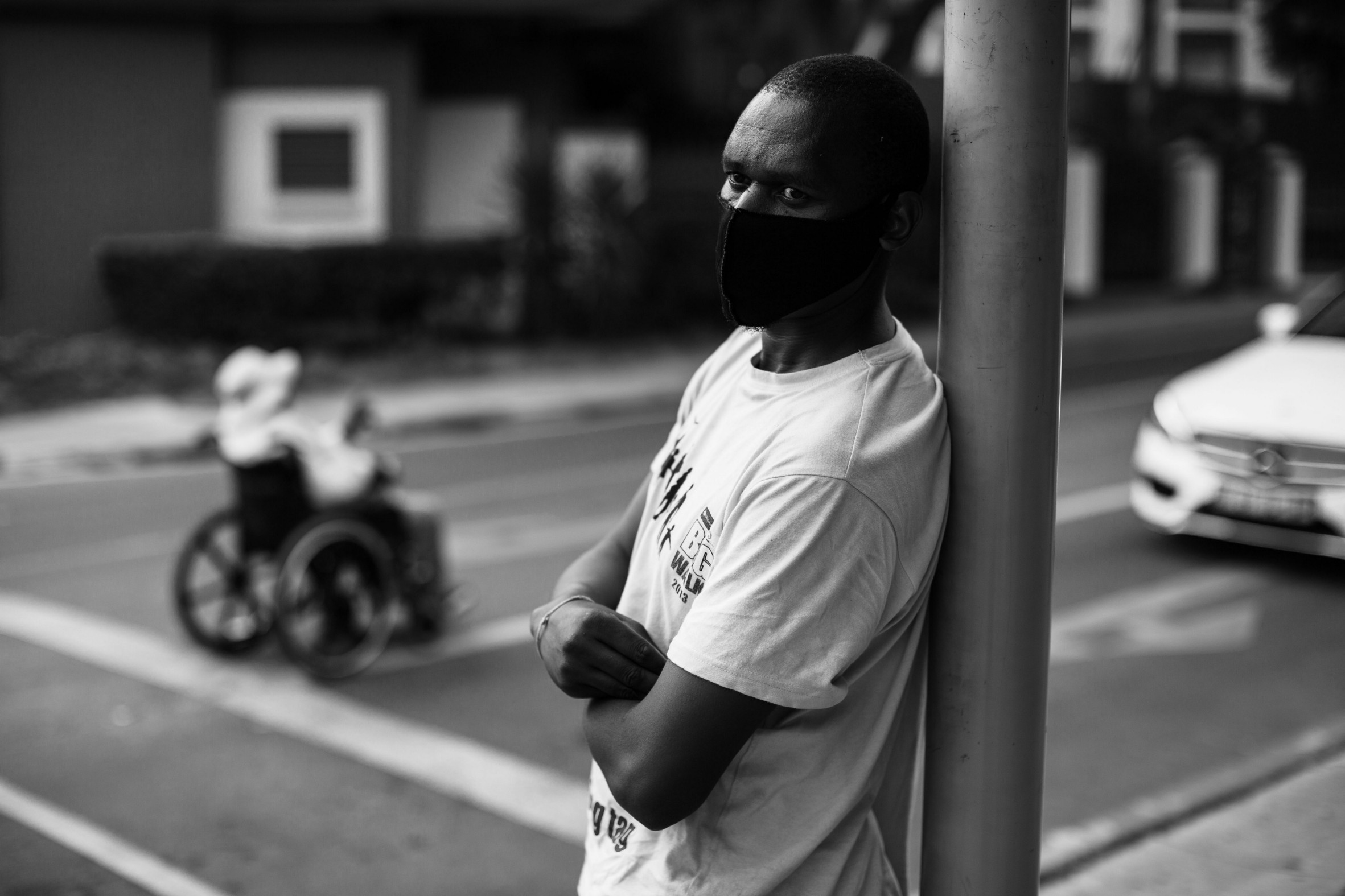 Ncube left Zimbabwe in 2008 following political violence and it became increasingly harder to get by on the meagre salary he was earning as a security guard. “I was suffering very much. You know, when the situation in the country is very bad, you will get paid and go to queue at the shop and while in the queue [you discover] your money is not enough anymore. It was very tough.

“You know when you come to a new country, it is difficult. It depends where people come from. Some people will be on their own, but we decided to be friends and stick together. It is important to look out for each other and make sure we survive,” he said. “We try and share everything.

“We are helping each other. Right now, we are brothers,” he said in his deep, raspy voice. 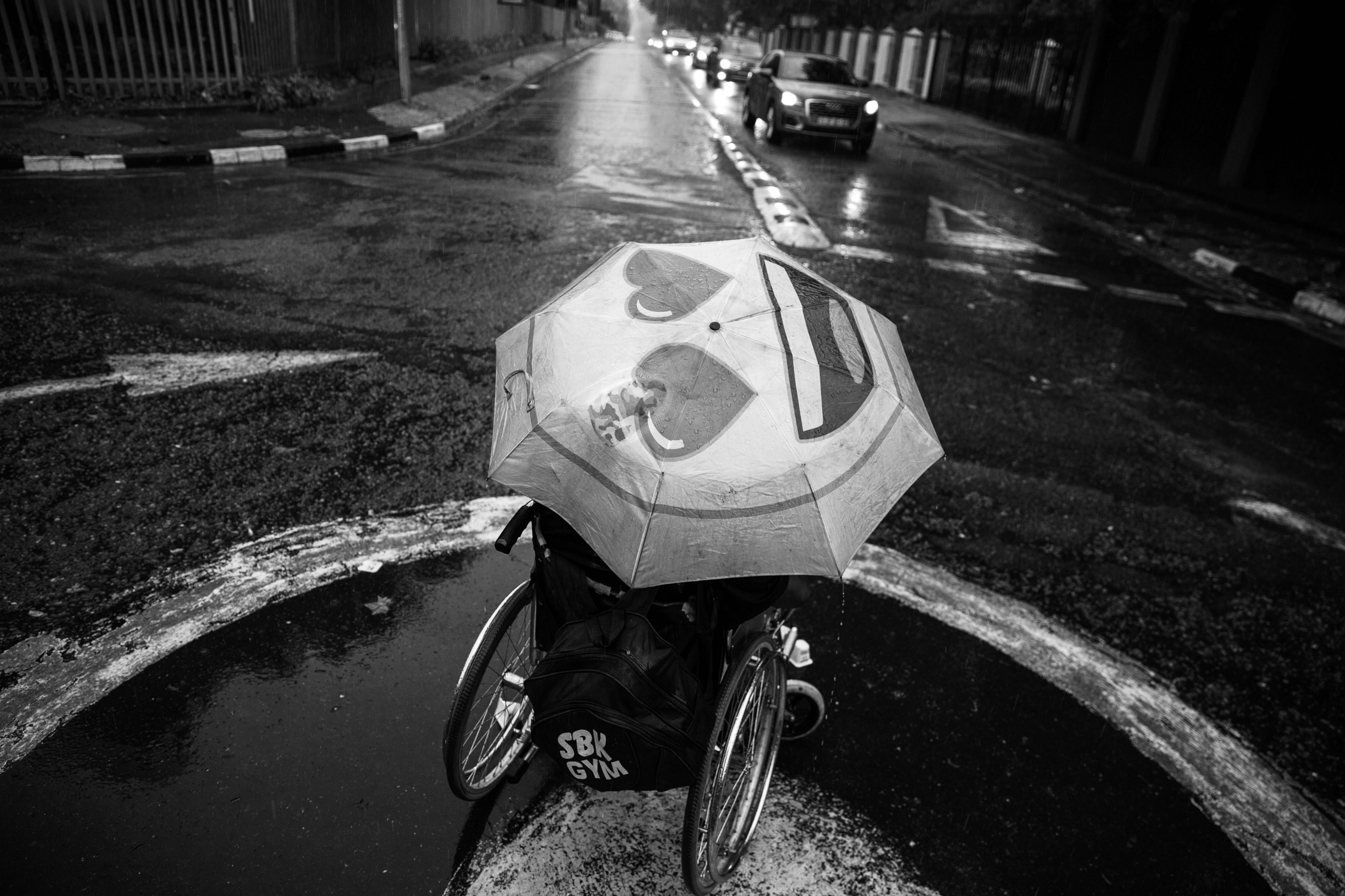