Caleb Mutombo was 12 years old when he discovered weightlifting. It became an obsession that would dominate the next decade of his life as he started training intensively and eventually competing in body-building competitions.

“My brother and I, we were always talking about our bodies and how we wanted to look nice and build our bodies,” said Mutombo, seated on a bed in the bedroom he shares with his sister, her husband and their two children in Steenberg, Cape Town.

“We didn’t have money for a gym, so we would just lift what we had at the house — the table, books in our bags, anything. We became obsessed with it.”

In the past two years, however, the body-building has taken a back seat as he’s been unable to afford gym fees. However, he’s still in good shape with a visible six-pack and toned biceps.

Mutombo, now 23, does not exactly fit the general stereotype of a bodybuilder. He was born with a number of physical disabilities in his legs, shoulders, arms and hands. A handsome young man with a loud, infectious laugh, his larger-than-life presence belies his physical stature. With a height of around 130cm and a weight of about 40kg, he is used to attracting attention.

The disabilities, however, have never held him back. One of the first things he did when he moved to Cape Town from Johannesburg’s East Rand two years ago was to learn to swim, and shortly after that he learned to surf. He was able to stand upright on the surfboard on his second attempt, he said proudly. “I didn’t choose my circumstances. So I don’t really dwell on the fact that ‘this is not working, or that is not working’. Or I have been dealt that kind of hand. I sort of just brush it off.”

Mutombo and his older brother, Kalala, were both born with sickle-cell anaemia — an inherited red blood cell disorder — which means he doesn’t have enough healthy red blood cells to move oxygen through his body.

As a result of this illness, their parents left the Democratic Republic of the Congo (DRC) and travelled to South Africa to seek treatment for their two sons when Caleb was only two years old. He had operations done on his legs, his arms and his chest, and also received a blood transfusion. He was lucky that his older sister, Jemima, was a match. But unfortunately for Kalala, their sister was not a match for him. 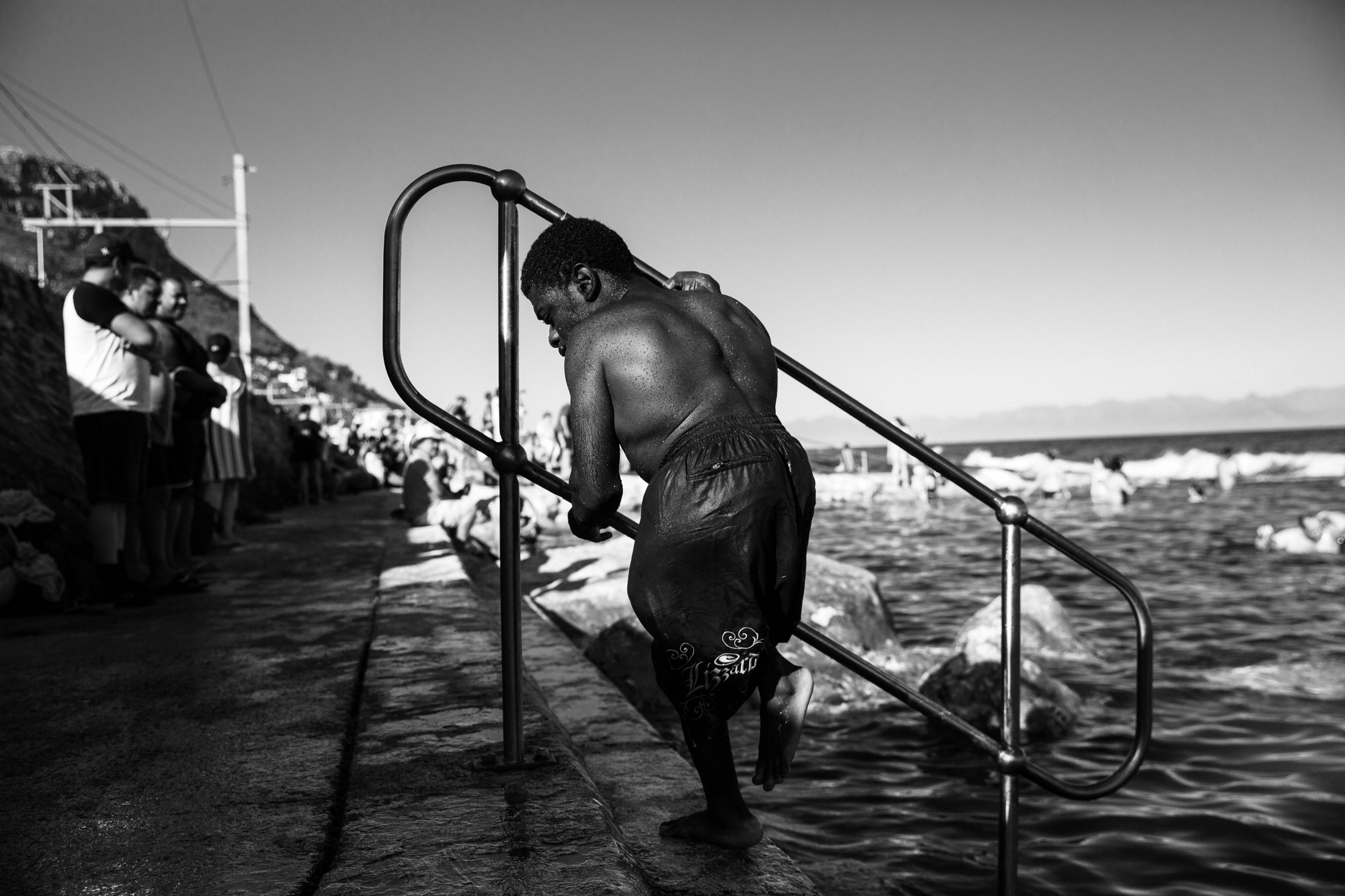 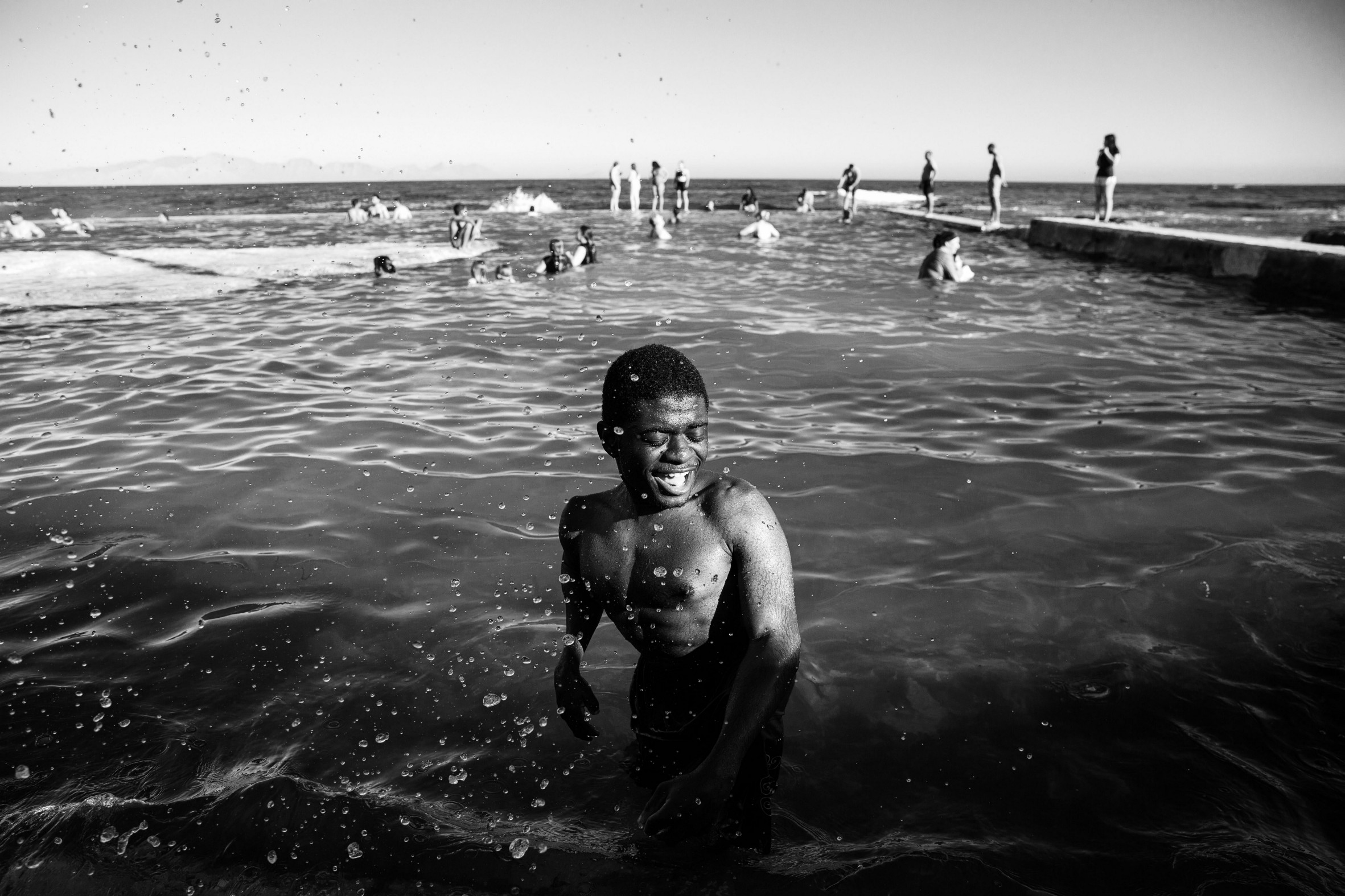 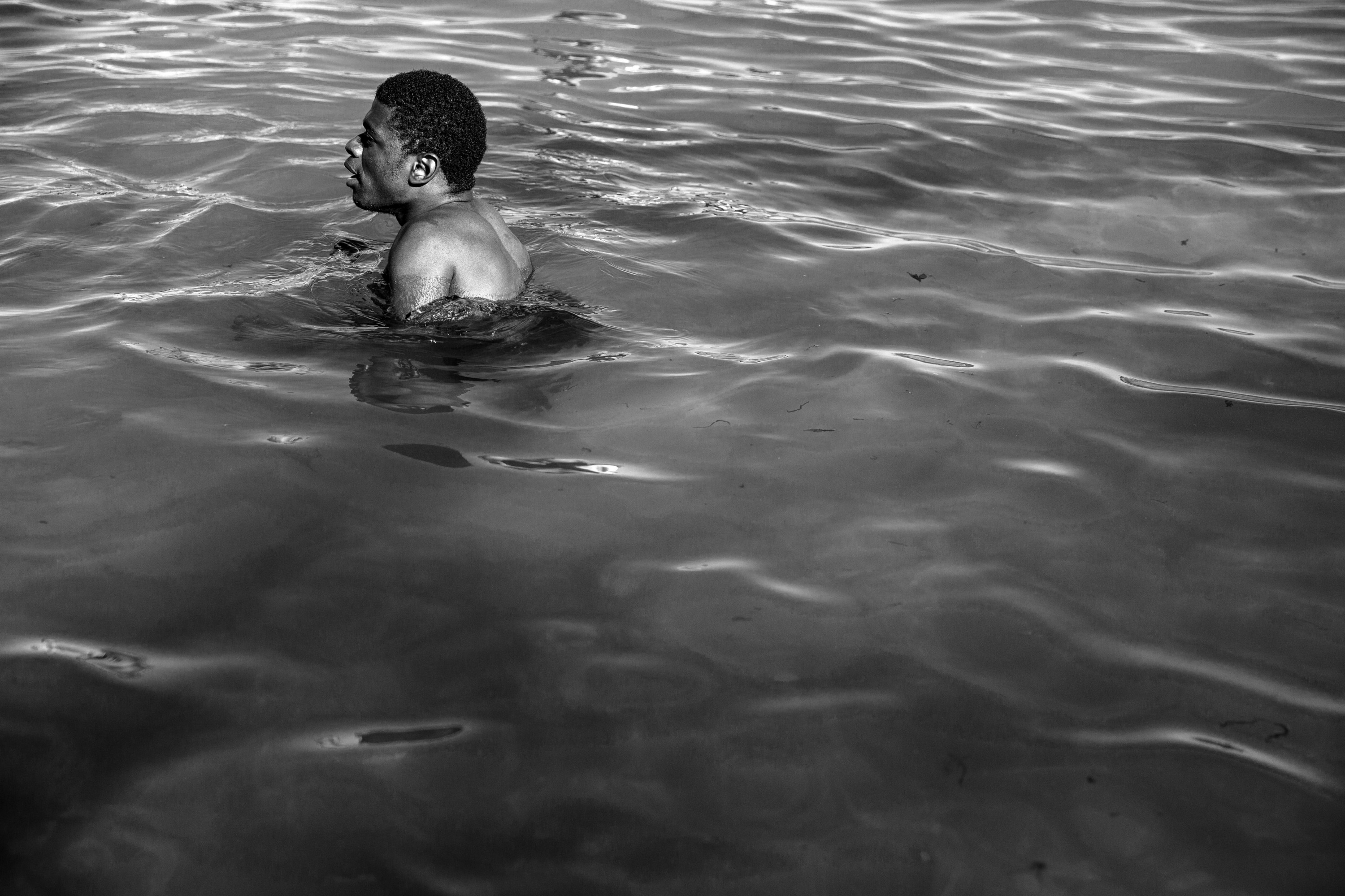 One of the first things Caleb did after moving to Cape Town was learn to swim.

Shortly after the first medical procedures on the two brothers, their parents ran out of money. “I don’t know what happened but there was a dispute around the finances. My parents decided to go back to Congo to work and get more money to send to us here,” he said.

Caleb, Kalala, Jemima and their youngest brother, Jeremy, stayed behind with their grandmother in South Africa. Their parents would send money whenever they were able to, but that eventually dried up after his father was retrenched.

“I used to feel like a burden. I would think ‘They’re right, this isn’t my country. I don’t have money, what am I doing here?’”

In 2005, when Caleb was eight years old, their grandfather in the DRC passed away. Following his death, their grandmother took Jeremy and returned to the DRC, leaving the three children behind. One of their aunts came to look after them, but Caleb said they soon realized she was “unfit to take good care” of them.

This started a downward spiral for the children and they eventually became a child-headed household, before Caleb and Kalala ended up in a children’s home. Fending for himself and then living in the children’s home, Caleb had to learn to have a thick skin. He and his brother would be mocked because of their disabilities, their poverty and the fact that they were not South African.

“The younger kids would make fun of me. Some kids weren’t nice to me. I was from a Congolese background, but I hardly knew my background. I was not really raised in a Congolese way. I was more like a hybrid, a Congolese-South African kid. I didn’t really know where I fit in,” Caleb explained.

“I remember the neighbourhood kids would make fun of us. They used to call us makwerekwere (a derogatory term generally used for African immigrants). They used to tell us they were going to beat us up,” he said.

“There was even a time when we were too scared to come out of the house because of the neighbourhood bullies.”

When he moved to the children’s home, a number of children from other African countries as well as South Africans were residents. Here they entered a programme where they spoke about xenophobia and different nationalities, and dispelled myths around migrants.

“I used to feel like a burden. I would think ‘They’re right, this isn’t my country. I don’t have money, what am I doing here?’ I didn’t ask to come here and I felt like a burden because of that,” he said.

Throughout primary and high school, insults such as “Go back to the Congo” were common for him. But xenophobic comments from another migrant child in the children’s home left him most baffled.

“There was one particular kid who would bring it up and bring up the poverty and that we’re from the Congo. But he was from Zimbabwe. The situation there is also hectic,” he said. “I just think it was his insecurities to bring down the other person so he can feel better about himself. It’s an ugly reality of human psychology.”

Growing up in such trying circumstances, Caleb still managed to develop into a fearless and very positive person, and he has learned to brush off comments and stares from strangers.

On a recent visit to the beach at Kalk Bay in Cape Town, a small blonde boy couldn’t stop staring at Caleb. The boy approached him curiously and asked: “How did you break your legs?”

“Oh, I was born like this,” he responded, smiling, without any hostility. “You know, when it’s kids, I just don’t mind them,” he said. “But when it’s a teenager and they’re laughing I kind of feel bad.

“I get some kids asking me what’s wrong and how did I break my leg. They’re kids. I would also be curious,” he explained. “Adults normally ask in a respectful way. But it irritates me a bit when they’re laughing. But they’ve got a bigger disability — a mental disability — because if you’re at that age and you laugh at someone you’re pretty far gone.”

Wherever he goes people stare — at the fish and chip shop, at the tidal pool. Everyone’s eyes are on him. Some people smile, but others gawk with their mouths open. Caleb doesn’t seem to notice. He just keeps on going.

“I know people stare. People make comments,” he said. “I’ve had people laugh at me because I have an older face and basically a young kid’s body. People laugh at that.

“But it also pays well, I’ll tell you that,” he said, laughing. “Sometimes I’ll walk in public and someone would just give me money, like R20 or R40, and say: ‘You’re such an inspiration. I have a brother, I have a sister, I have a mom or dad, whatever, who is sitting at home in a wheelchair.’ When they say I am an inspiration, I honestly don’t know why.

“All I have to do to be an inspiration is go to the mall. There are times where I love the attention but it’s not when I’m eating a salad. It’s when I’m competing in body-building and standing in front of the crowd and flexing my muscles.” 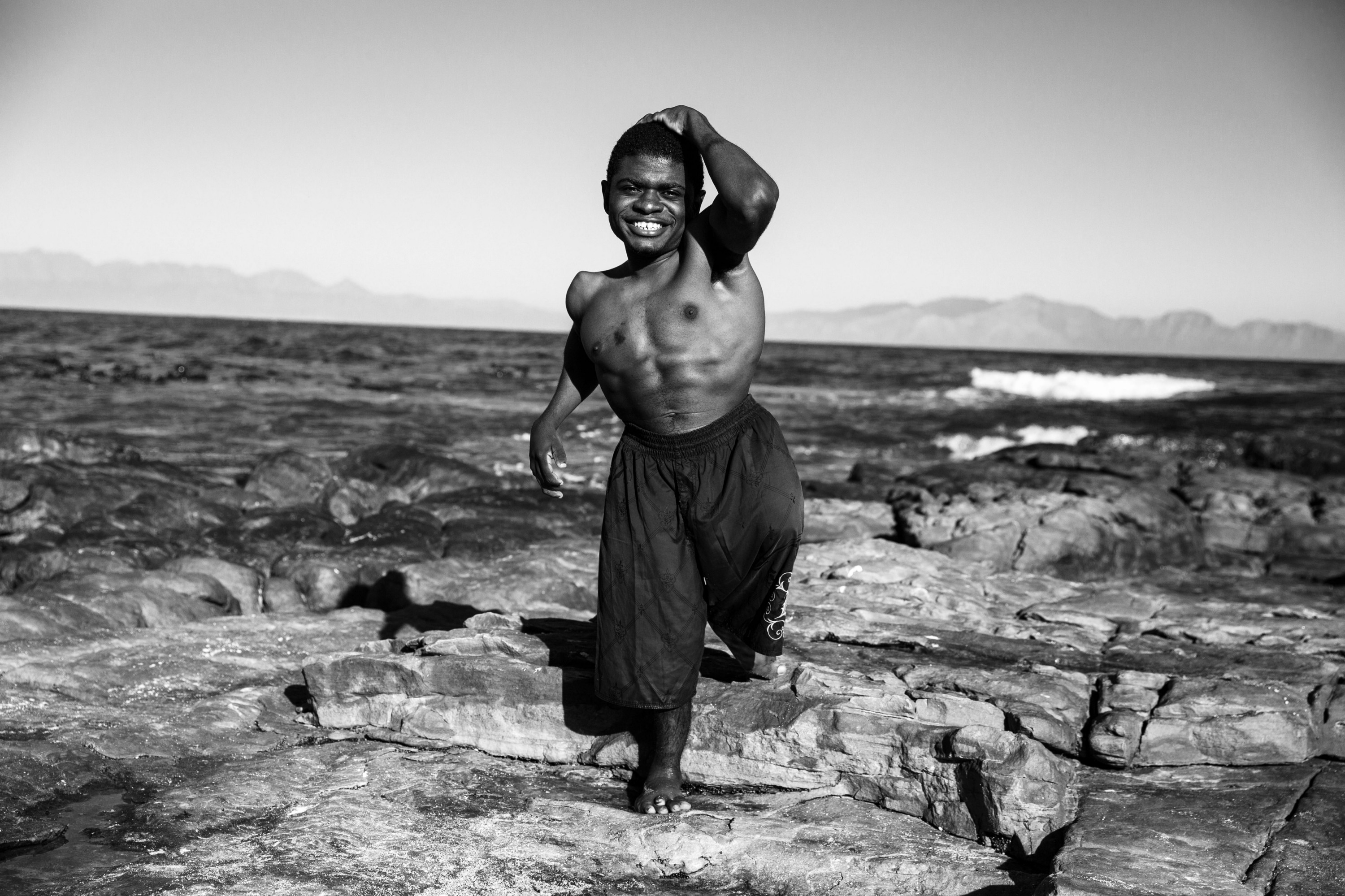 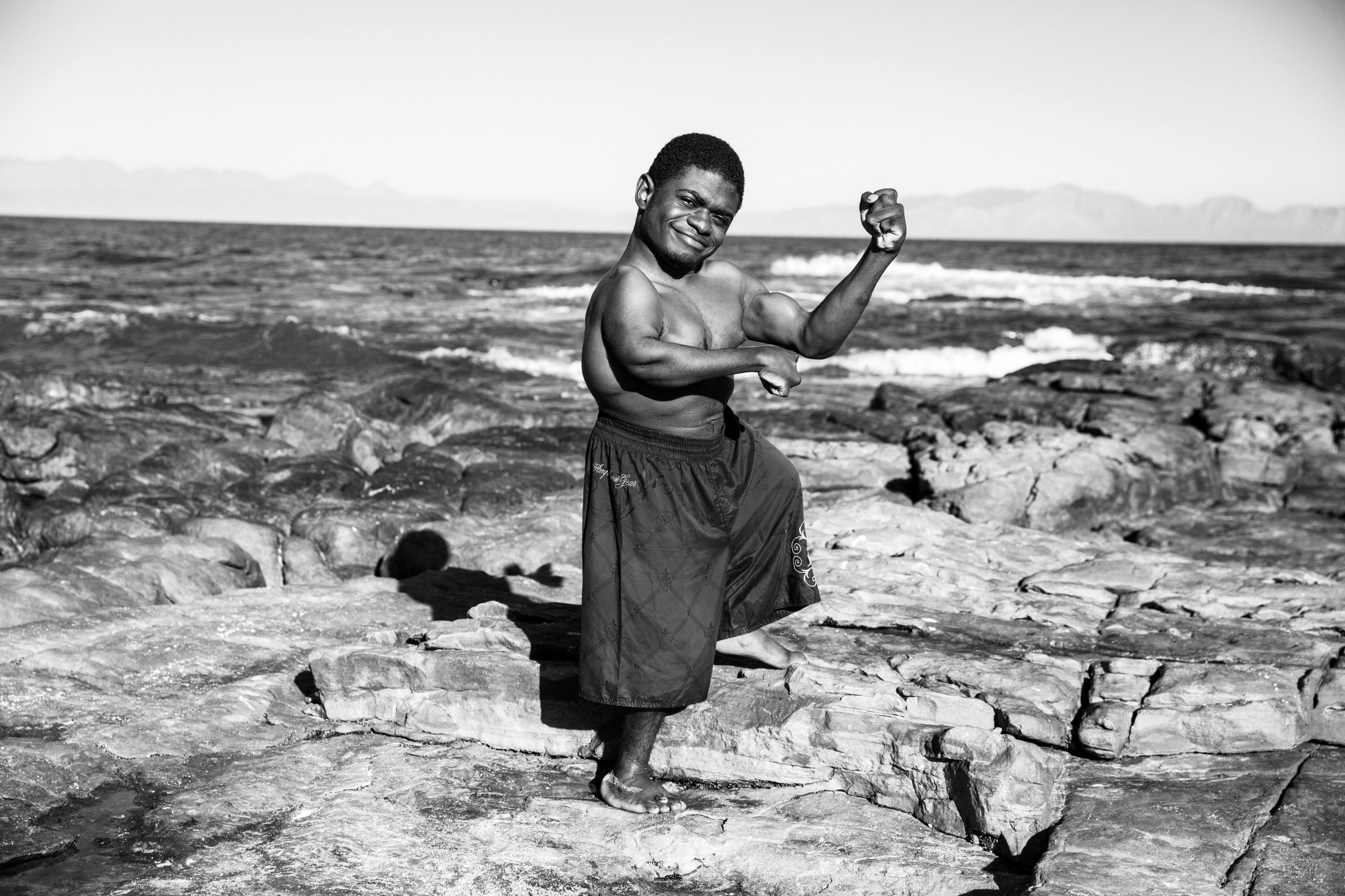 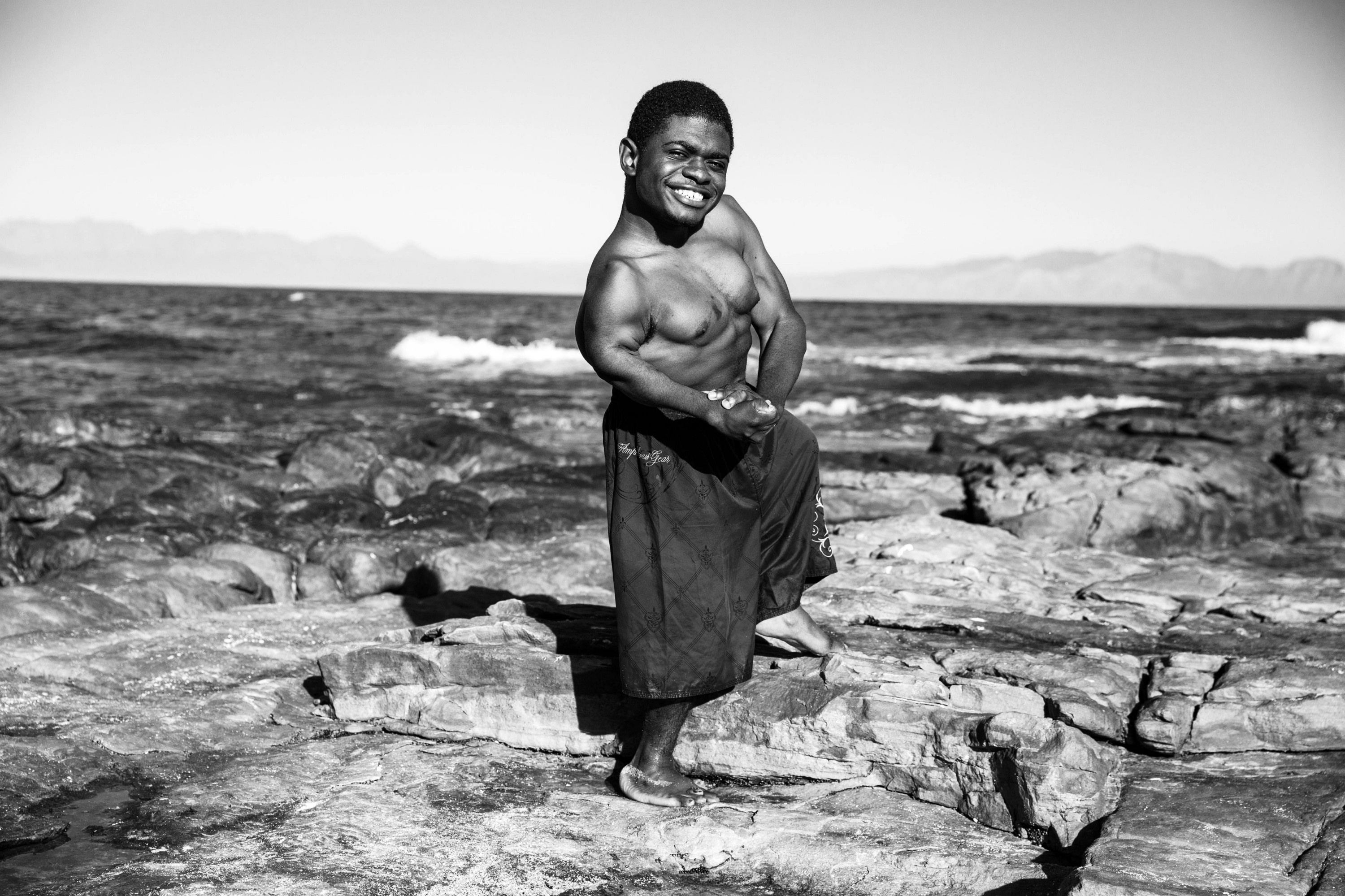 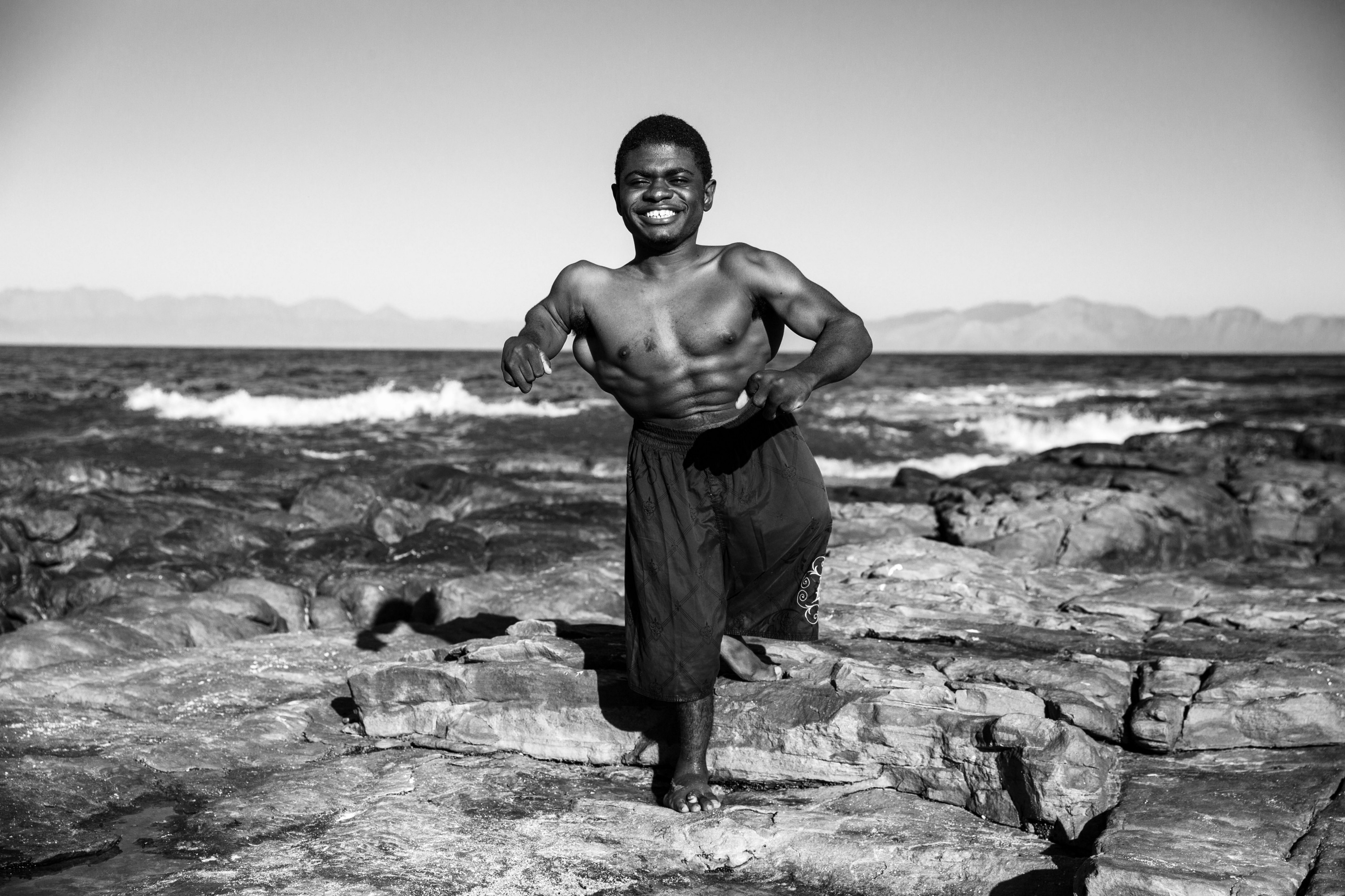 He joked and said he was a broke college kid, so donations from strangers thinking he was an inspiration did help towards his next meal.

After moving to Cape Town, Caleb enrolled in an IT course at the False Bay TVET College’s Fish Hoek campus — and it is part of the reason he has been unable to afford his gym fees. Studying IT means he spends a lot of time on his computer, and he credits the YouTube videos he watches for the mental strength and resilience he has developed over the years.

“I’d like to think I’m strong mentally, I’d like to think so, yes,” he said. The videos he watches — bodybuilders and fitness professionals Mike Rashid, Simeon Panda and Ulisses Jr being some of his favourites — have taught him valuable lessons: “Don’t be blindly positive. Be a realist. If you’re just positive, it prevents you from assessing the situation properly. You need to see things for what they are — then you can respond properly.”

But it’s not just the videos. “I had a brother who was basically the same as myself. With our parents not around, he was the next person to follow. We always found our own way around, so I think that’s where the resilience comes from,” he said. He lost his brother about six years ago when Kalala died after contracting meningitis. The loss of his brother and first role model was “devastating”, Caleb said.

“We didn’t have money for a gym, so we would just lift what we had at the house — the table, books in our bags, anything.”

While he’s studying IT, he dreams of becoming an inventor, futuristic ideas straight out of sci-fi movies dominating his thinking. “Growing up, the first thing I wanted was to become an inventor. I wanted to invent things — flying cars was the first, but obviously that’s an idea everyone has.” One of Caleb’s other big ideas is an obstacle course race with electric wheelchairs called “motorchairs”.

“I want to create like high-performance wheelchairs and create an obstacle course and have it run like Formula One. That’s what I want to do. I already found one [person] crazy enough to do this. I will start with myself,” he said with a laugh.