Bread or Coal: The Bitter Choice for Ukraine's Conflict-Affected

Meet Nina (71) and Ivan (75) from eastern Ukraine, where the conflict has entered its eighth year.

They are the dramatis personae in a new video/social media campaign being run by the International Organization for Migration (IOM) to help focus attention on the plight of the 3 million people affected by the fighting.

Along with the 1.4 million displaced, over 10,000 people have died in the conflict. Health-care facilities, living quarters, schools and roads have been damaged while water and electricity supplies are frequently disrupted.

Before the conflict, Nina and Ivan lived a good life. There was a real sense of community in the village, with family and friends close by. They got married 50 years ago, had two sons and worked as teachers in the local school until they retired.

When the conflict started in 2014, they didn’t think it would last very long. But the fighting soon reached their village. There were days and nights when the shelling was too severe to stay, and they had to find shelter further away. Thankfully, they were not home the day their house was hit.

When the fighting moved further away, Nina and Ivan decided to come back. This was their home and the community pulled together to help them fix their damaged house.

Nina and Ivan’s sons quit the village before the conflict but used to visit regularly. When the conflict started and the contact line separating government- from non-government-controlled areas came into being, visits became increasingly rare.

With the outbreak of the COVID-19 pandemic, movement restrictions became even more severe and their sons have not been able to visit at all. These new restrictions made it very difficult for Nina and Ivan to get their pensions.

Their children manage to send some money from time to time, which Nina and Ivan spend on food, medicine, heating materials and other basic needs. They can never save enough to fix the roof.

Humanitarian assistance such as coal deliveries by IOM teams, made possible through European Civil Protection and Humanitarian Aid Operations (ECHO), have helped relieve stress on limited resources and allowed them to save money to cover additional essential needs, such as, in the case of Nina and Ivan, much needed roof repairs.

Here are some more stories of people who have been helped by IOM and the EU.

Vira: “Now, as I received coal as humanitarian aid, I can buy medicines for my son.” Photo: IOM/Polina Perfilieva

Oleksandr: “I had been saving money for heating, but as IOM brought me three tons of coal, I was able to cover some of my other pressing needs.” Photo: IOM/Polina Perfilieva

Valentyna: “I do not know what helped us get through all these difficulties. I just want peace.” Photo: IOM/Polina Perfilieva

Vira was among 5,400 householders to receive coal which helped keep families warm during the harsh Ukrainian winter. Three tons of coal per family were delivered along a 427 kilometre-long contact line dividing the region into areas under the Government’s control and those outside it.

Her son Volodymyr has special medical needs. “I used to buy coal on my own and hire people to help move it to the barn, which was quite expensive. Now, as I received coal as humanitarian aid, I can buy medicines for my son,” says Vira.

Valerii broke his leg eight years ago and had no money to pay for surgery, so he has been suffering ever since. When shelling started in 2014, he was unable to make it to the shelter, but he and his wife somehow survived a direct hit on their house.

“We had to choose whether we would buy bread or coal,” he remembers. “We heated our house only once in two days to save fuel and money, shivering day and night before we received three tons of coal.”

“My yard was hit by a shell and we sat in a basement for a month,” recalls Valentyna. “We keep suffering from water shortages, because the water filtration station is often interrupted by hostilities. I do not know how we are getting through all these difficulties. I just want peace.”

She plans to use the money she saved on coal to cover other essential expenses, such as drinking water, food and medicine.

In 2016, Oleksandr, a former bus driver, suffered a stroke and has been living alone on a small disability pension ever since. He also mentions having funds for medicine as a most important impact of the IOM aid: “I had been saving money for heating, but after IOM brought me three tons of coal, I was able to cover some of my other pressing needs.”

Visits to social and medical institutions have been a challenge for people like Oleksandr. The facilities in the region suffer from the collateral damage of aging infrastructure and the recent hostilities. To help keep the chill at bay during the cold season, IOM has provided essential rehabilitation works to medical and social facilities in the Donetsk Region, including two hospitals, one clinic and a boarding school, that were damaged by fighting.

The Organization has also contributed to the renovations of a newly established centre for internally displaced persons. In total, over 14,000 people will use the services of these renovated institutions, now without risking their health due to broken windows or leaky roofs. 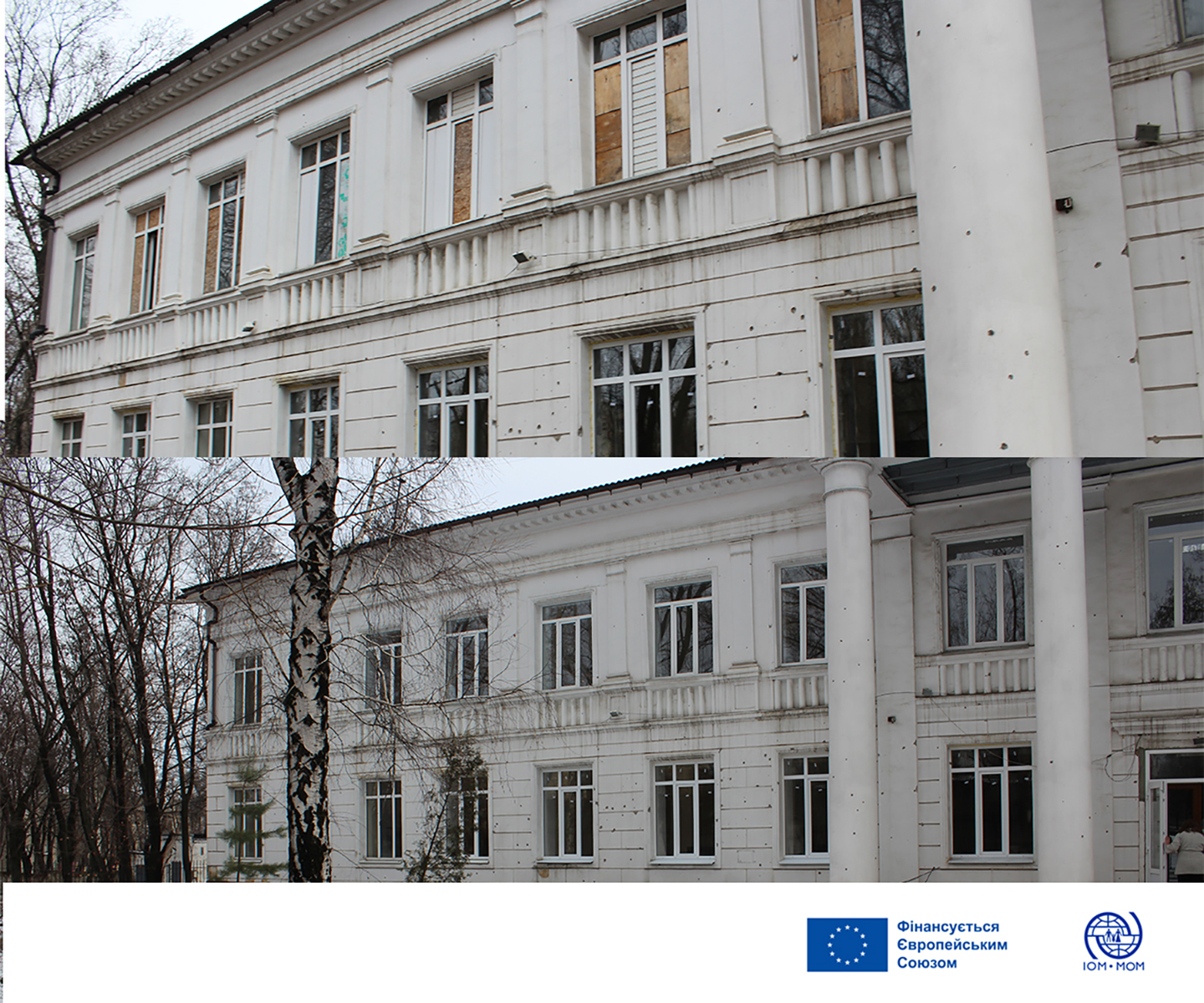 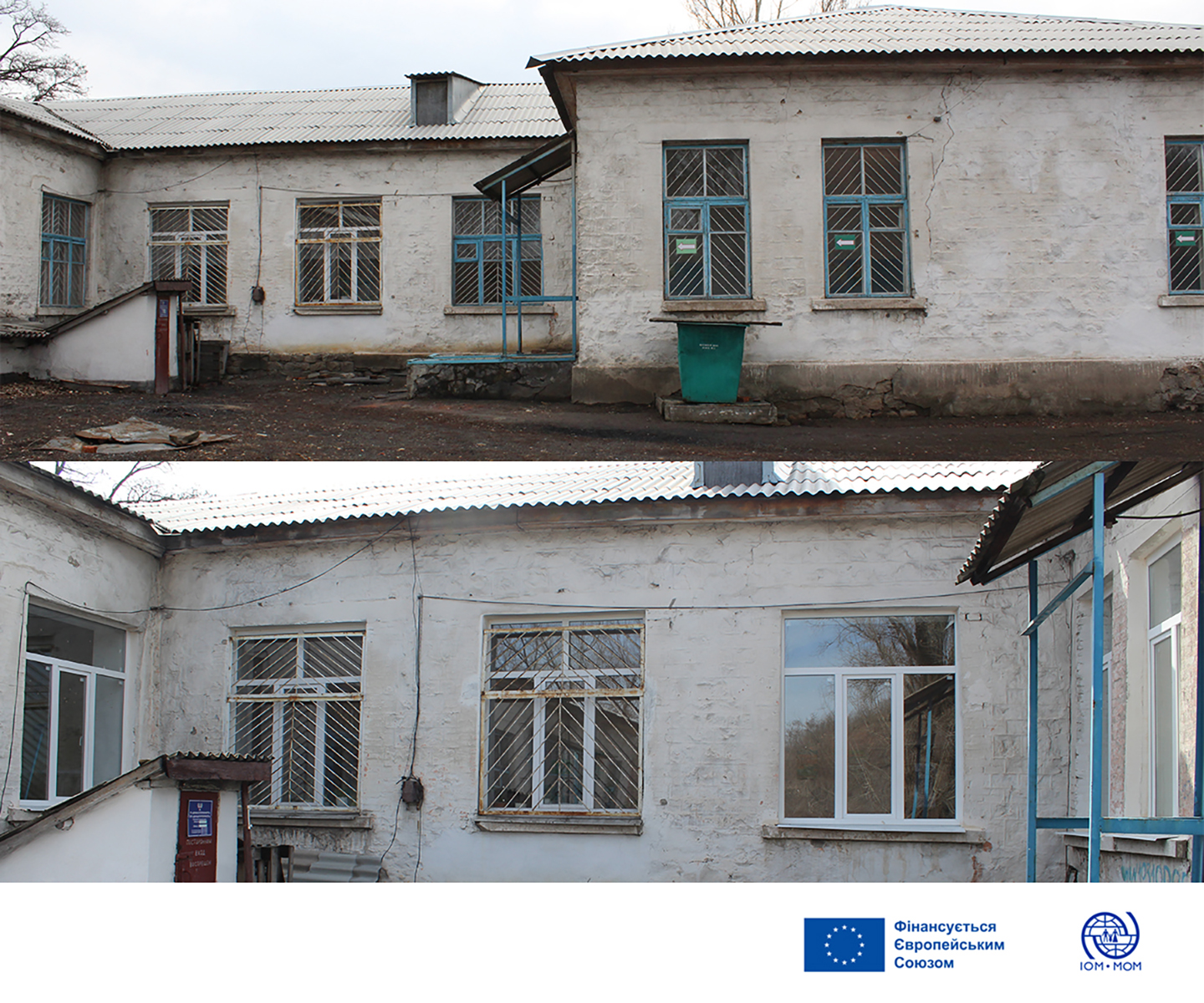 Municipal buildings, damaged during the conflict, have been repaired by IOM and the EU. Photo: IOM/Polina Perfilieva

The seven-year-old armed conflict in eastern Ukraine has taken a heavy toll on the lives of millions of ordinary Ukrainians living on both sides of the contact line. It is anything but frozen. Frequent military escalations and ceasefire violations continue disrupting the lives of civilians. The conflict has destabilized the entire country and caused a negative impact on the general stability of the region.

New social risks that are likely to have long-term, generational effects have emerged, with mental health consequences that are especially dire for children living within the conflict zone, survivors of gender-based violence and victims of exploitation. The elderly population is considered to be particularly fragile.

The COVID-19 pandemic has created additional pressure on an already weakened health-care and social service systems. During the first months of the pandemic, all crossing points along the contact line were closed in an attempt to contain the virus.

This made it almost impossible for many elderly and disabled people to receive pensions and social benefits or to maintain family ties. The pandemic has made hundreds of thousands of conflict-weary people more vulnerable and more dependent on humanitarian aid, while the humanitarian access has remained restricted.

Compounding these issues, the precarious security situation in Ukraine’s eastern conflict area presents a constant concern that any deterioration of security conditions there could severely aggravate the humanitarian situation for over 3 million people in need of assistance, whose resilience is already strained.

“Though the number of people in need in eastern Ukraine remains the same as in 2020, their needs became much more severe due to the COVID-19 pandemic,” said Anh Nguyen, Chief of Mission at IOM Ukraine. “IOM works to leave no one behind on both sides of the contact line and we are grateful to donors and partners for their support to the most vulnerable.”