A Bridge Too Far: Mental Health Services for Migrants

Moses Tuli was 13 years old when his mother started noticing small changes in his behaviour.

“I don’t really remember when he became sick. But I really started noticing it when he became aggressive,” said his mom, Nossita Maguite Tuli, 56, through an interpreter. “He started throwing stones at me and kept yelling that he needed money.”

Nossita usually accompanies her now 35-year-old son to the Stimela Activity Centre in Naas, Nkomazi in Mpumalanga, near the Mozambican border. Here, he and other people with disabilities take part in skills development programmes and practice crafts such as weaving mats and making wooden spoons to sell.

Nossita didn’t pay much attention to Moses’ aggression, but in due course his teachers realized that he was unable to carry out basic instructions or write down answers to questions on the chalkboard. He was taken out of school after failing to progress from Grade 7 for a third year.

One of his report cards reads, in isiZulu: “Akulahwa mbeleko ngakufelwa (which roughly translates to “the fact that something unpleasant happened to you does not mean you must lose hope”).

Moses was able to dress himself and eat but he needed help with bathing. “The biggest challenge is to see your child losing his mind and forgetting everything. If you ask him an easy question, he can’t even answer that,” Nossita said.

The family took Moses to the nearby Tonga Hospital, but doctors were unable to provide a diagnosis for his disorder, since all they do is provide medication for people who are “mentally ill”, according to Nossita. Exacerbating the family’s struggles to access health services for Moses is the fact that Nossita and her husband are from Mozambique. Although Moses was born in South Africa, he doesn’t have a birth certificate.

At the Tuli family compound, where two of Moses’ younger siblings practice as traditional healers, they have tried their best to diagnose and treat him. His sister, Maggie, 31, said he “became sick” as “punishment from the ancestors”.

“We’ve tried to treat him a few times. But he is not getting better,” Maggie said.

While Moses has a caring family and support network to look after him, many other people in the area who are living with mental or psychiatric disorders are not so well supported. During the day, they are often left to roam the streets around their homes, without any real treatment or services available to assist them. 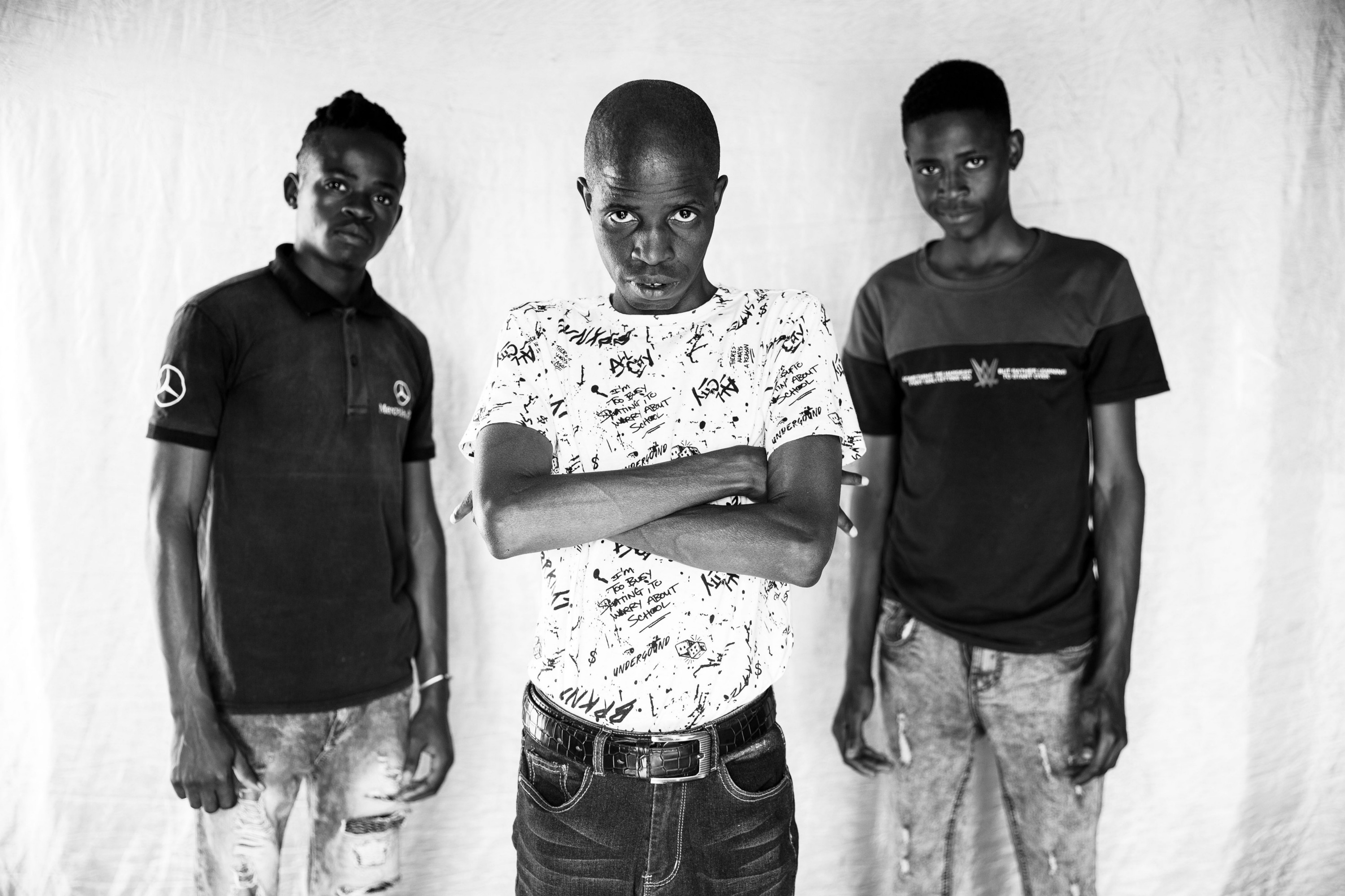 Moses at home with two of his younger brothers Petros (left) and Ernest (right).

Rebecca Walker, a post-doctoral researcher at the African Centre for Migration and Society at the University of the Witwatersrand and one of the authors of a new research report on migrants with disabilities, said the public health system offered very little in terms of access to mental health services.

Walker said people in urban areas had an advantage over people from rural areas. “You do have more access in terms of organizations available. There are places you can go. Because it is an urban space, there is more recognition, more discussion of mental health issues, more awareness of what they are. That might get people to access help,” she said.

Despite this, Walker said mental health issues related to overall migrant health was “quite a confusing area”, because it’s only ever discussed in the context of trauma and war trauma.

The most pressing mental health issues migrants face seemed to be the stresses around daily survival, such as paying rent, Walker said. “The level of anxiety that creates is high. It’s so closely tied to your immediate circumstances and the need for those basic services just to alleviate that.” 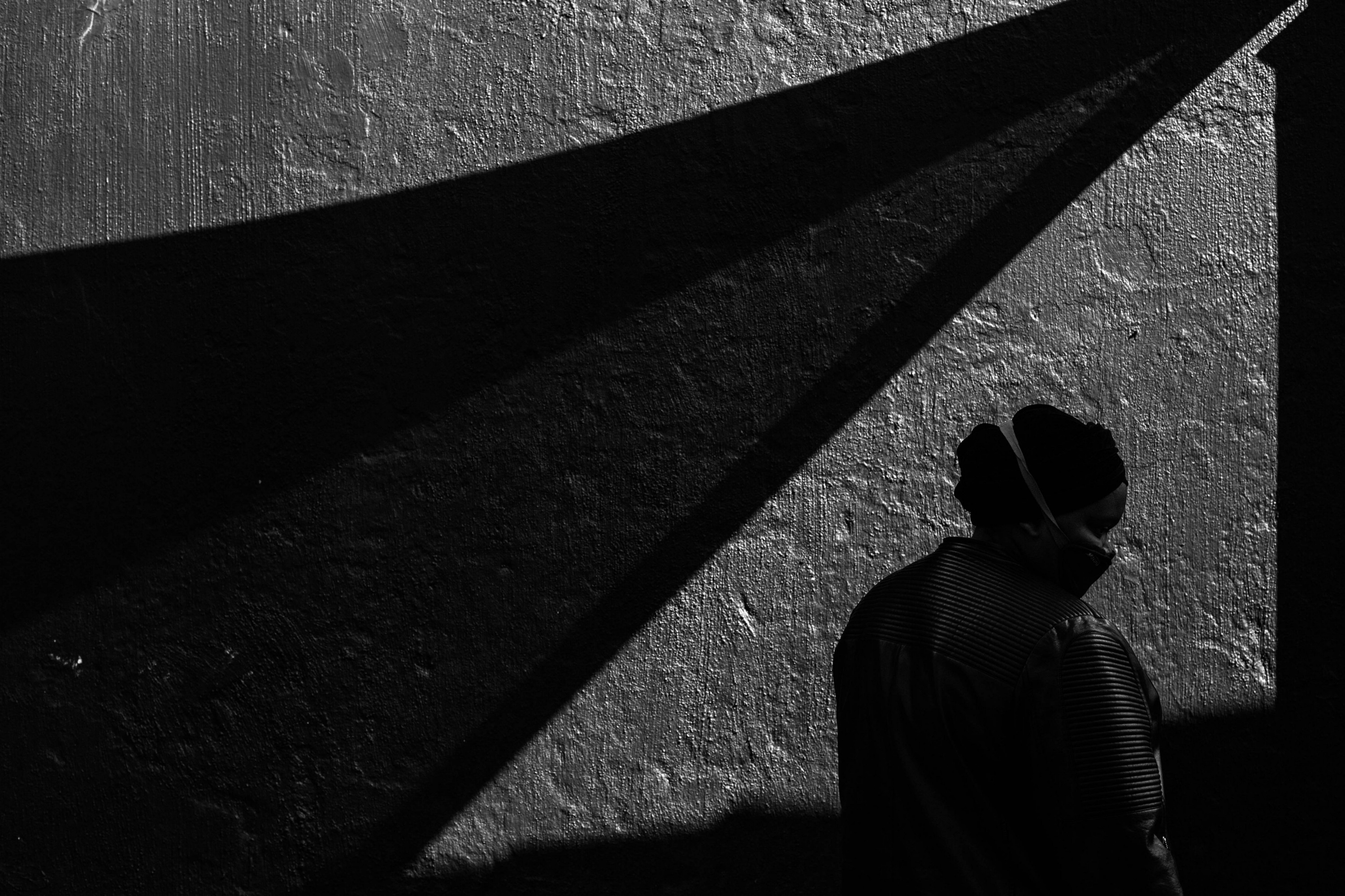 Esther Bikombo* experienced many traumatic events at home in the DRC and during her journey to South Africa.

Esther Bikombo*, 38, has not only been subjected to the trauma of an attack on her family in the Democratic Republic of the Congo (DRC), sexual assault, and fleeing the conflict, but she worries every day about how she will pay rent and take care of her disabled child.

For her, life in South Africa has been one long, relentless struggle, with the COVID-19 pandemic and lockdown exacerbating her problems.

Locked up in a tiny room with her two children, the younger of whom lives with a severe physical disability, Bikombo has felt her mental health deteriorate rapidly. During the lockdown, with the military patrolling the streets of Johannesburg, she was reminded of the horrors she had endured in the DRC.

She fled her country in 2007 after the attack on her family. Members of a rebel group sexually assaulted her and hacked her brother and mother to death with machetes in her presence.

But this was not the only time men raped Bikombo. As she travelled through many African countries — including Burundi, Tanzania and Zimbabwe — to seek refuge in South Africa, men who initially offered help sexually assaulted her instead.

“I have not been able to sleep. I have been very scared,” Bikombo said while the country was still in a stricter level of lockdown. She receives counselling and financial help from the Sophiatown Community Psychological Services (SCPS) in Bertrams, Johannesburg.

“I have been thinking too much … lots of questions that don’t have an answer. It makes me remember everything that happened to me.” On top of the trauma of seeing soldiers on the streets again and having flashbacks of what happened to her, Bikombo, who is unemployed, worries about how she will feed her children.

“It makes life unbearable because you have to work to provide as a mother, but there is no way I can provide [for] or feed the children. It makes life hell for me,” she said. 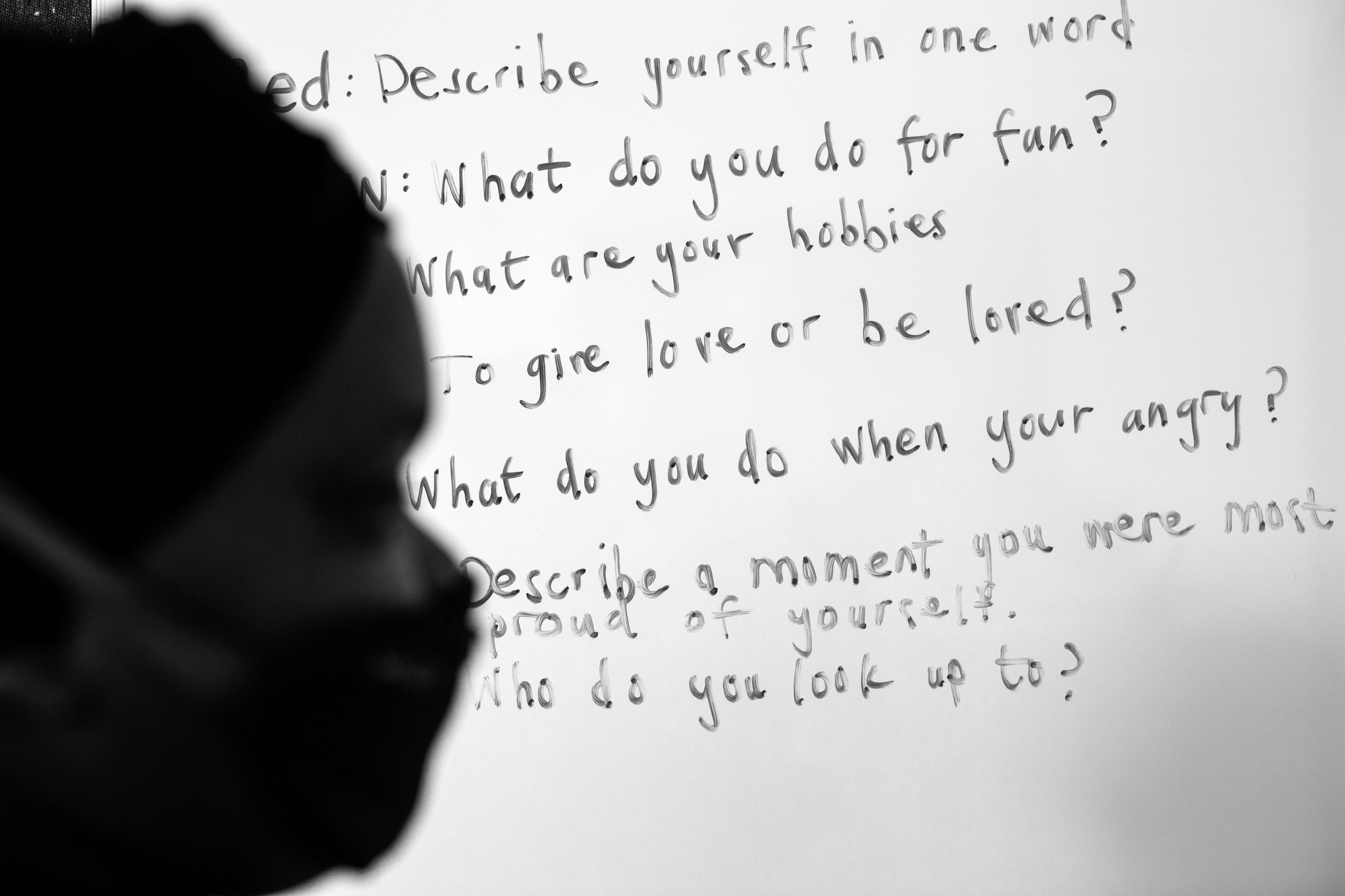 Federica Micoli, the legal and advocacy officer at SCPS, said most of the 50 families with migrant or refugee backgrounds to whom the organization provides assistance have been dealing with “a huge amount of stress”.

“I would say all of them [are struggling]. They have a huge amount of stress because they don’t have food and are under threat of eviction because they can’t pay rent.” The situation was also exacerbated for those who needed specific medications but could not access them, she said.

The Psycho-Social Rights Forum, a consortium of non-governmental organizations that offer psycho-social support to refugees and asylum seekers in South Africa, said the lockdown took a significant toll on the mental health of many of their clients.

“Many of our clients manifest symptoms — constant headaches, body aches and high blood pressure — that can be related to the need for an unrelenting vigilance in their daily lives. In the isolation of their dwellings, memories of war and persecution, which had been skillfully managed by the daily struggle for survival, have come back to haunt many of our clients. This leads to the feeling that they will never be free from those ghosts,” the forum said.

“During this time, the sense of uprootedness and of not belonging is also enhanced by the fact that migrants are de facto, even if not formally, excluded from the government food distribution programmes and social grants.”

Joseph Beya, 20, came to South Africa when he was four years old, after his family had fled the DRC. “I don’t know a lot of that side. But I was told stories of the war and why we came here,” he said. 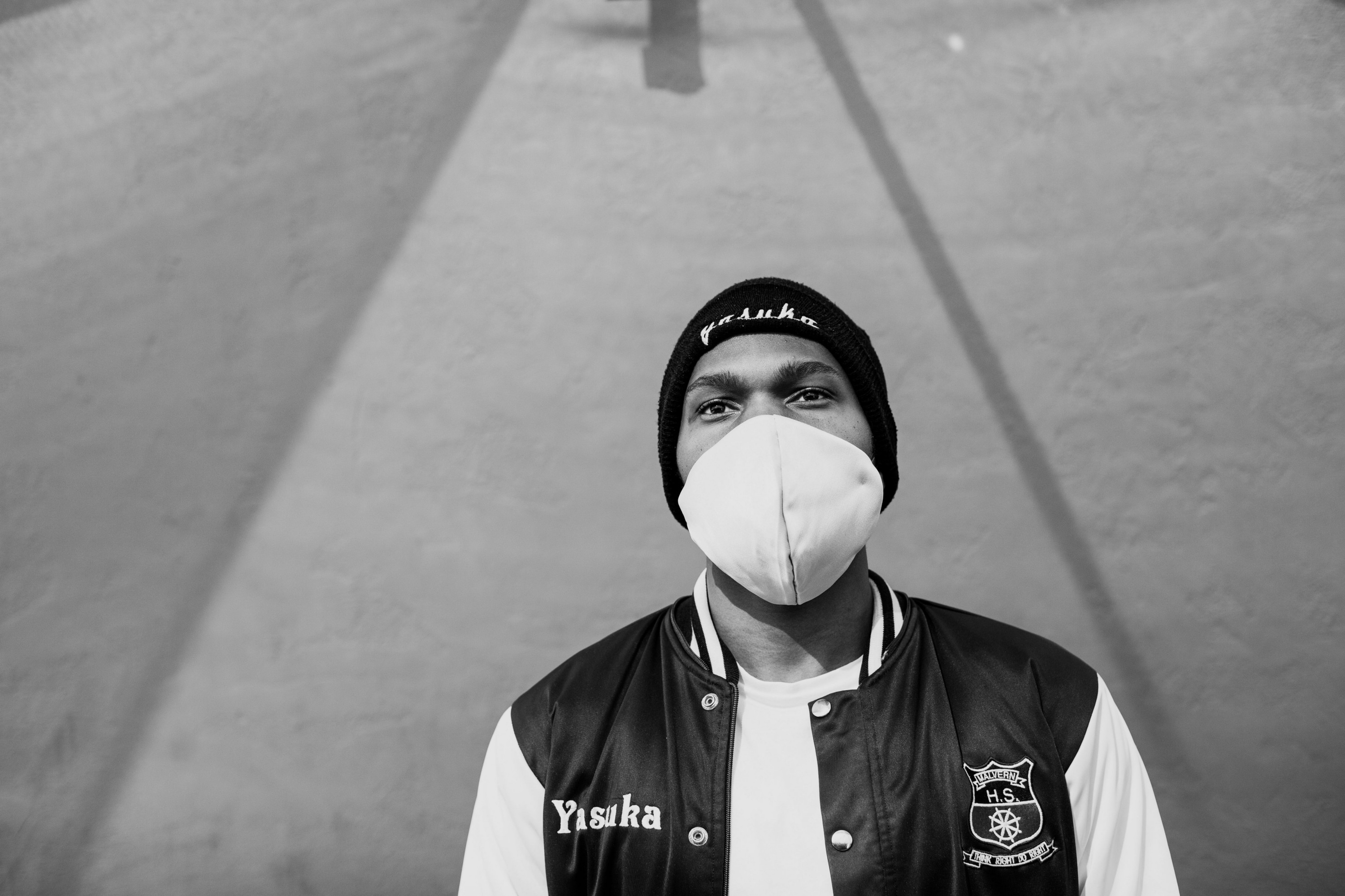 Joseph Beya arrived in South Africa when he was four years old. His family fled fighting in the DRC.

As a young refugee in South Africa, xenophobic comments from peers at school were a reality. And in September 2019, the xenophobic attacks that swept through Johannesburg landed right on his doorstep in the working-class neighbourhood of Malvern, east of Johannesburg.

“It’s been tough. It’s never easy learning how people act, knowing that you are from another country. They treat you differently,” he said.

“I have been living in Malvern for almost all my life, and you know what happened here last year. They were throwing things where we were living. I heard some people jumping over [the wall] but the police came before anything could happen. I was shaking,” he said.

Beya, his 14-year-old sister and their mother survived this period of xenophobic violence physically unscathed. But his world came crashing down when one of his best friends was shot dead outside his house, on Christmas Day last year, after visiting him.

Being confined to the small room he shares with his mother and sister during lockdown, Beya said all the thoughts and feelings from that incident came rushing back. “Lockdown has been tough. Physically, emotionally, even financially, it’s been hectic. Physically, because the right to be free and go out has been taken away from us, which I feel is one of the only rights foreigners have in this country — the ability to move around,” he said.

“When you are stuck inside you go through a lot of thoughts. That affects you emotionally and psychologically. With our parents who come from places where there was war, we can see the effects on them. Even seeing a soldier, they freak out, because they remember what used to happen.”

* Not her real name.

Parts of this story originally appeared in a story about mental health issues faced by migrants and refugees on New Frame.