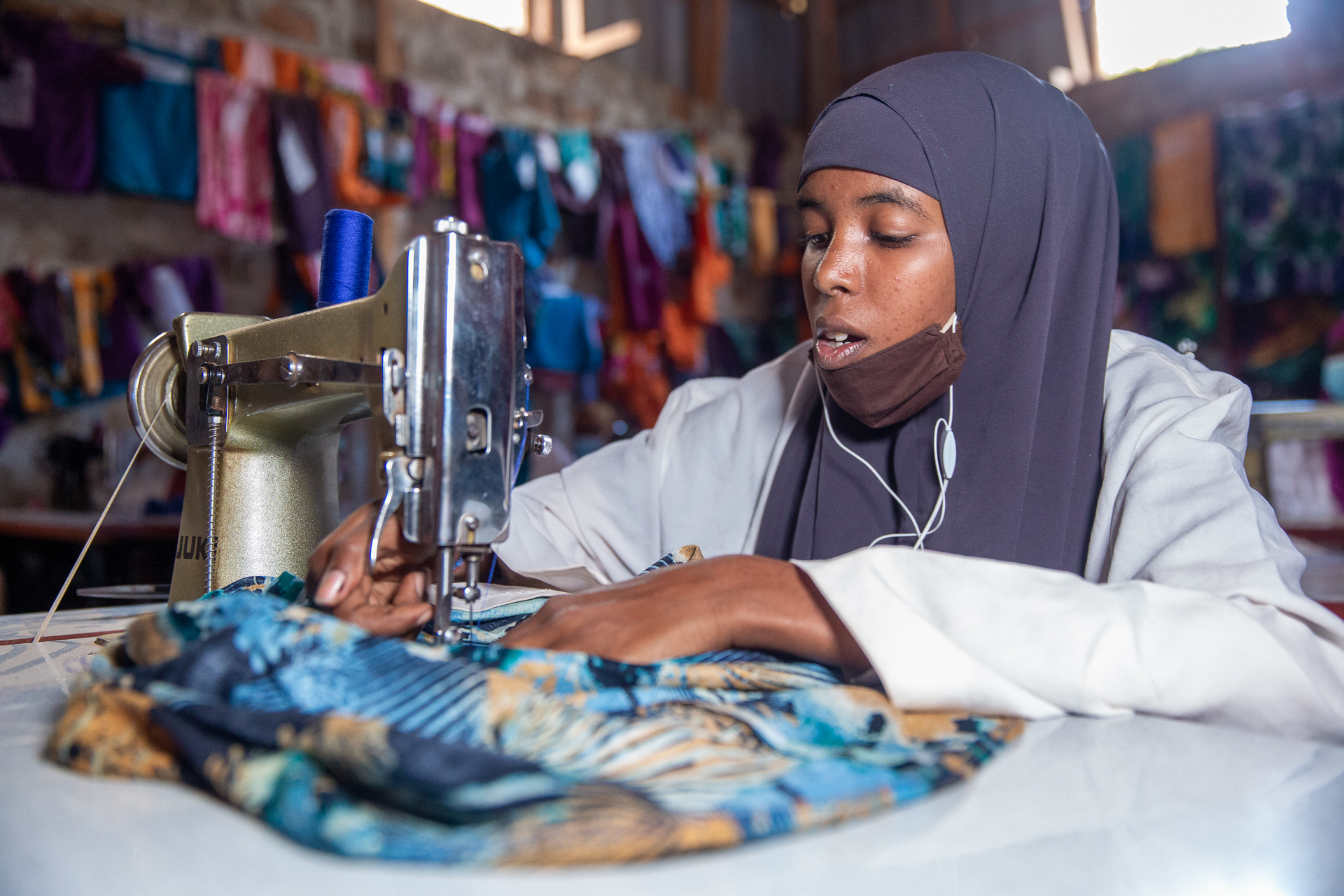 Asma is one of the 300 people who graduated from IOM’s training programme in Somalia in the hopes of developing more marketable skills. Photo: IOM/Claudia Rosel

Baidoa, 27 December 2022 – After graduating from high school, Abdullah wanted to find a job and help his parents who had cared for him all throughout his childhood. However, even with a high school diploma in his pocket, securing a job remained a distant dream for the 20-year-old.

“I knew how difficult it has been for my parents to pay for my education and I wanted to repay them for all their efforts,” says Abdullah.

A few months prior, Abdullah was just like any other youth in his city. He spent his days wandering the streets, unemployed, and with little or nothing to do. Baidoa, the city where he lives, is the largest in south-central Somalia and one of the most impacted by the current drought that is ravaging the country.

“I needed skills that would help me find a job, but I did not have the money to acquire them,” Abdullah explains. “There was no point in asking my parents to pay for courses because I knew they couldn't afford it.”

It wasn’t until he found out about the training programme offered at a local education centre that Abdullah’s life took a turn for the better. “I was told that there was an institution that was training young people like me who needed technical skills to find jobs, so I went to the centre to sign up.” 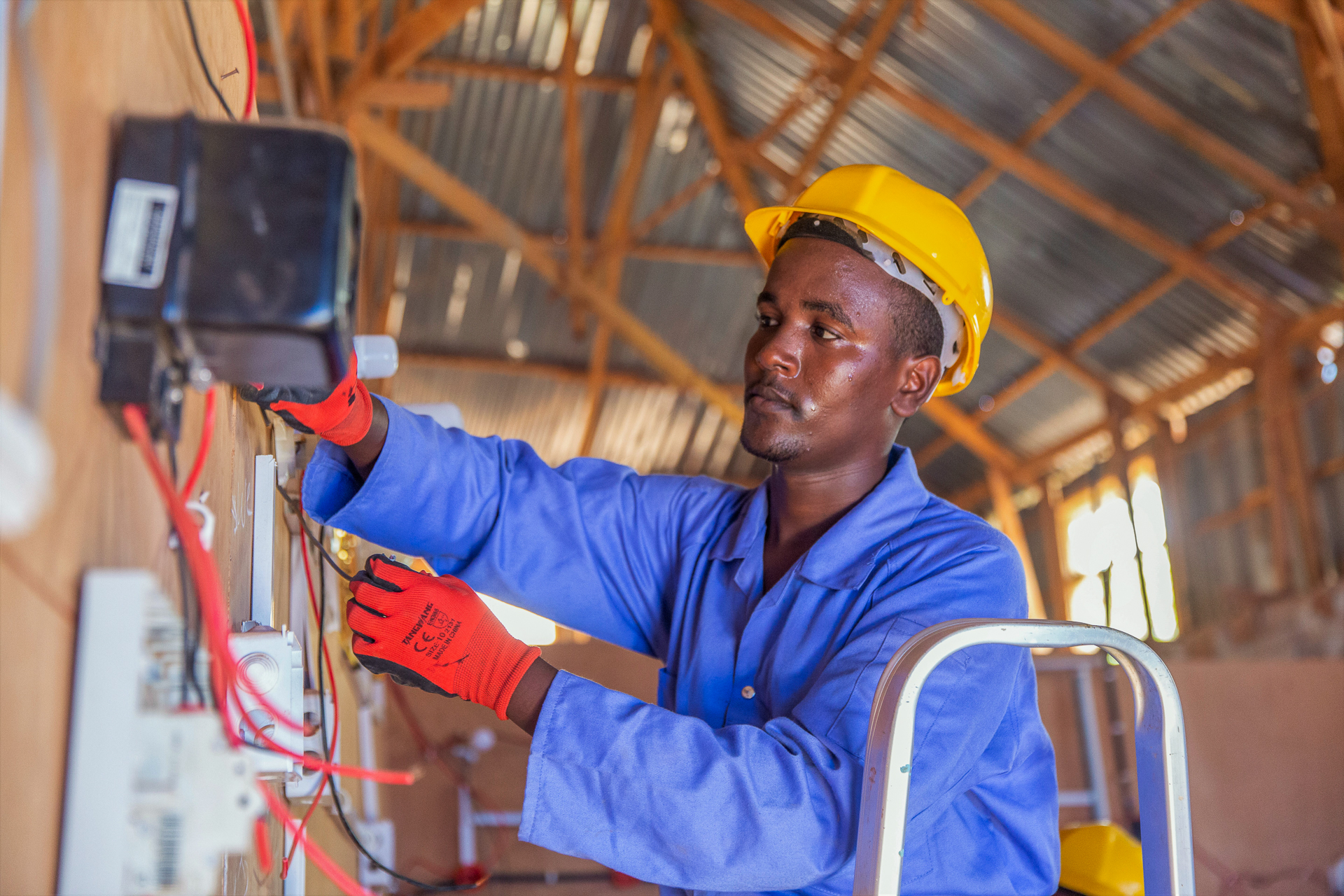 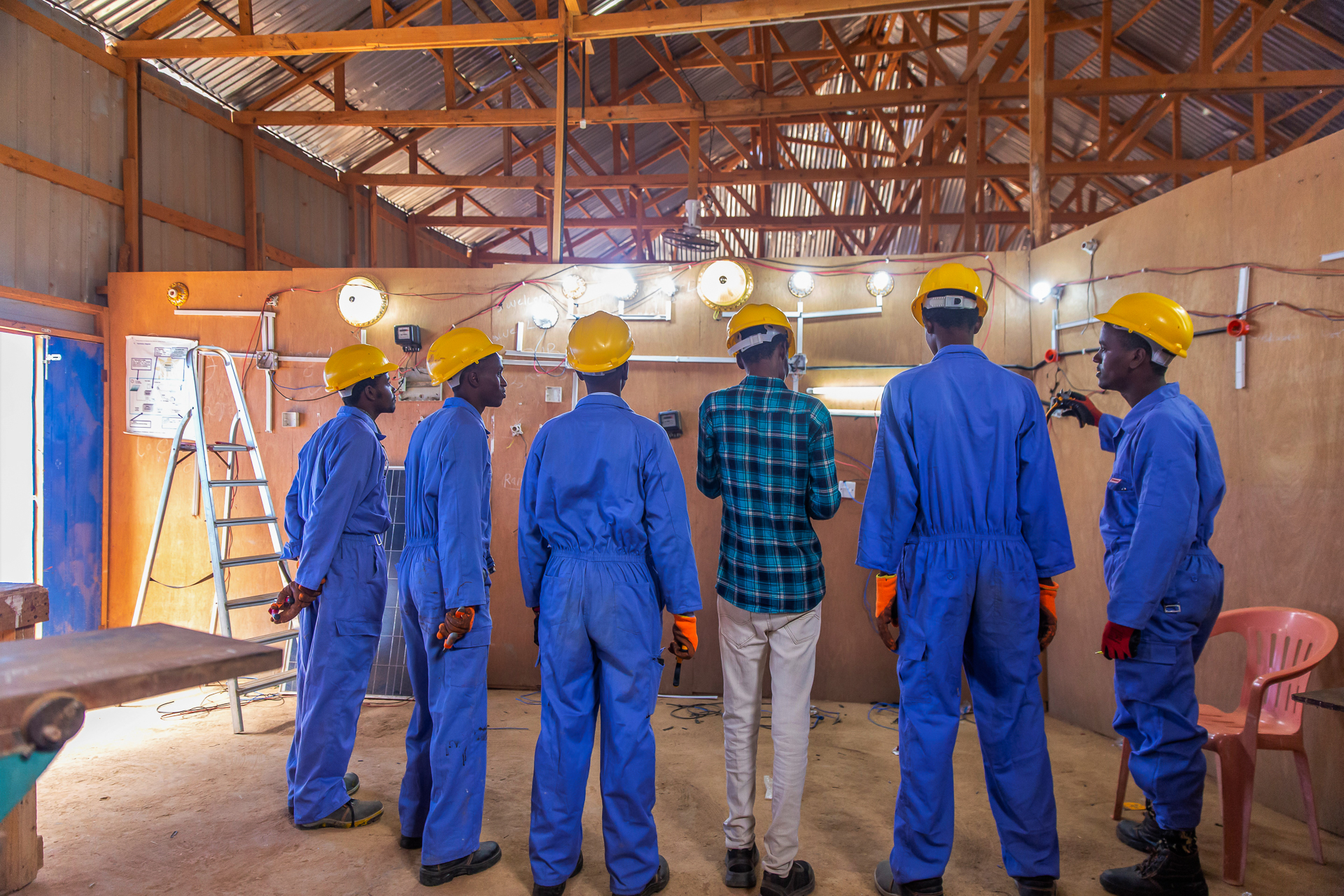 After completing the course, IOM provided Abdullah and other graduates with financial support to enroll in internships offered by private companies. Photo: IOM/Claudia Rosel

Abdullah was able to register for one of the free classes offered by Modern Management Company International as part of a project run by the International Organization of Migration (IOM), funded by the African Development Bank (AfDB).

During the six-month trainee programme, young people like Abdullah have the opportunity to develop new skills in tailoring, plumbing, and electrical technology that can boost their chances of employment.

“At the beginning of the project, we consulted with the Ministry of Energy and Water Resources as well as youth groups to see what kind of support they needed,” explains Abdi Salah, IOM’s team leader for water and sanitation-related activities in Baidoa.

“After several discussions, the groups agreed that we needed to focus on the critical need to reduce the economic and social exclusion of vulnerable low-income groups, especially those impacted by displacement.”

Youth unemployment remains a widespread issue in Somalia, particularly in cities like Baidoa and Kismayo where resources are overstretched, partly due to a rapid population growth linked to forced displacement. Both cities host tens of thousands of displaced persons who had to abandon their villages in rural areas and move to urban centres as they were no longer able to rely on land or animals for their livelihoods.

“Baidoa and Kismayo have welcomed thousands of people forced to flee after losing their livestock and crops,” explains Abdi. The current drought has displaced over 1 million people who are now faced with famine and extreme food shortages.

Even before the drought, the two cities were big displacement hubs due to conflict and climate shocks. Displaced persons in Somalia have limited education and job opportunities and often live in crowded settlements.

Since most of those displaced were farmers, finding alternative livelihoods in the city proved to be a struggle as they often lacked the skills needed to be selected for qualified jobs. 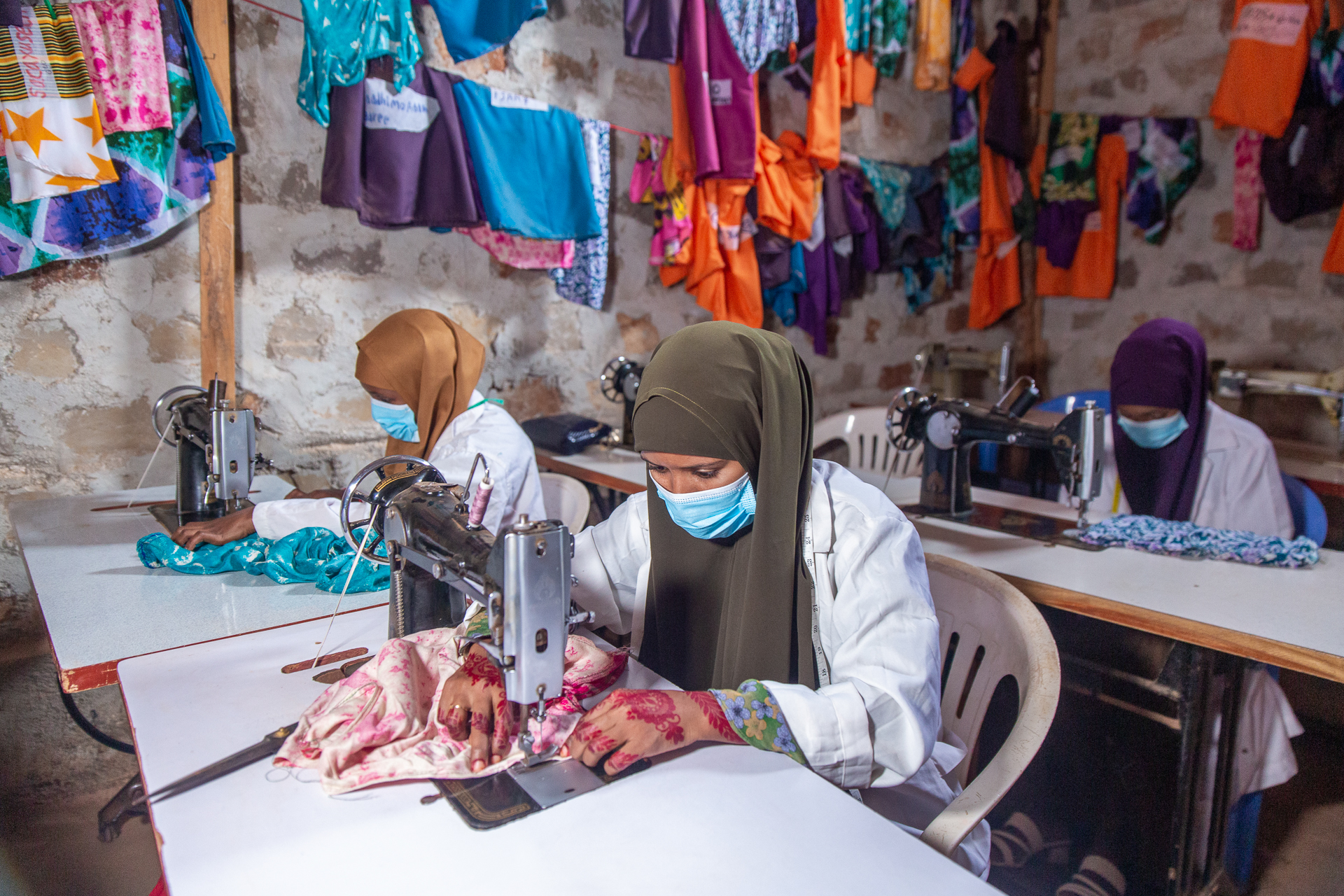 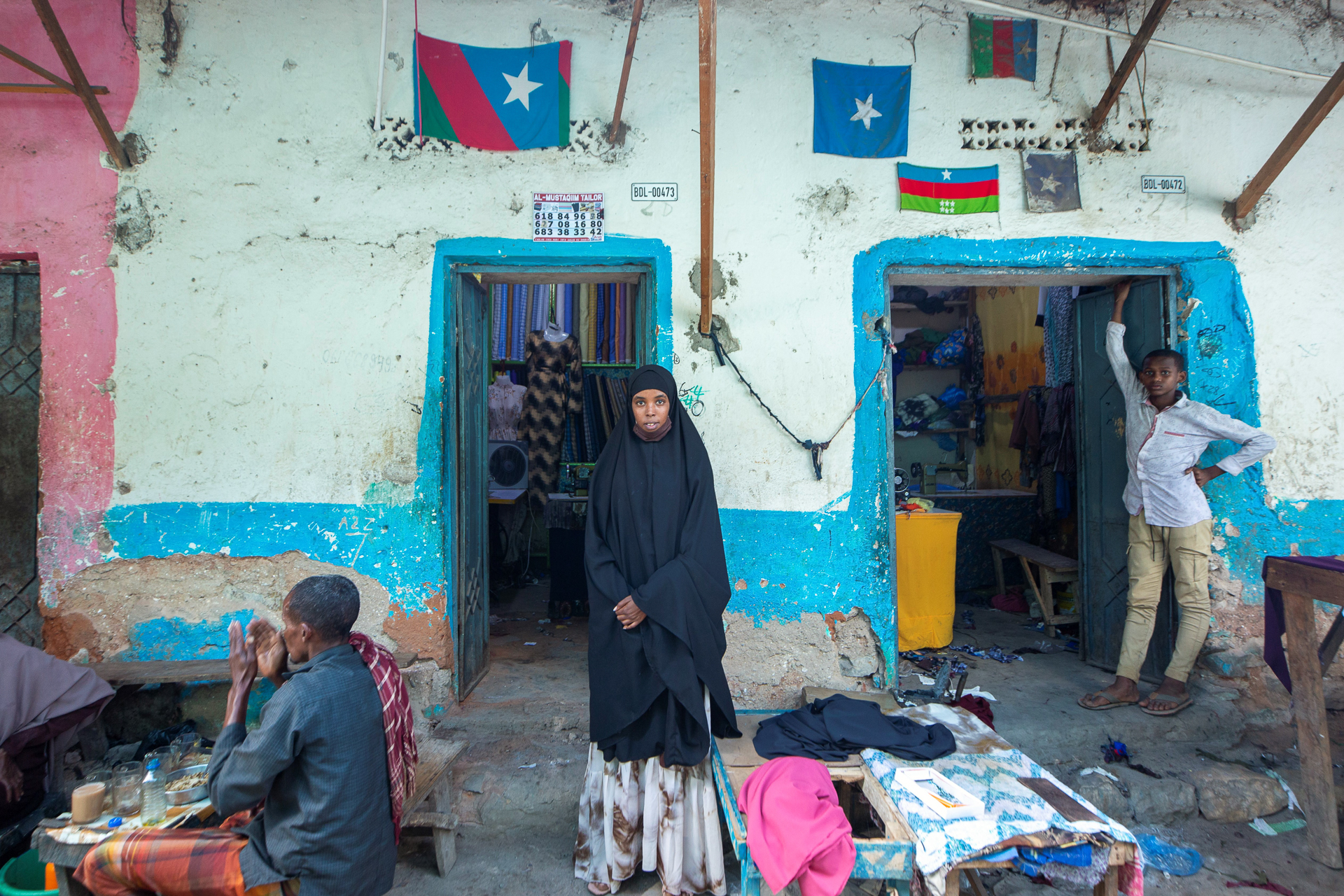 Since completing the course, Asma has been practicing at a shop owned by her friend's parents, where she has been sewing dresses. Photo: IOM/Claudia Rosel

The current training programme falls under a five-year, multi-million project funded by the AfDB that aims to improve access to water for displaced and vulnerable communities in Somalia’s urban centres.

Aside from providing immediate and long-term access to water and sanitation, IOM is also piloting activities like this new skills training programme that aims to reduce poverty and prevent the marginalization of vulnerable and low-income groups in high areas of displacement.

“Accessing skill training can drastically improve the lives of young people by helping them access better job opportunities. It can also dissuade them from engaging in criminal activities and being recruited by extremist groups as it gives them a sense of purpose and enhances their mental and psychical well-being,” says IOM’s Abdi.

After completing the course, IOM provided the 300 graduates with financial support to enroll in internships offered by private companies in Baidoa and Kismayo. Some have also received cash grants to open small businesses or buy equipment to jumpstart their professional careers.

As soon as Abdullah graduated as an electrician, he already began receiving job offers from his neighbours.

“Before, I used to stay at home with nothing to do, but now I often get requests from my neighbours to fix their cables, bulbs, or anything related to electricity,” the recent graduate explains. “I now feel respected in my community because they recognize me as someone with the ability to work well and assist others, and as someone who can support his family.”

Abdullah’s biggest challenge remains securing a long-term job, but he is confident he will have better opportunities than before. Most of the graduates are now working and earning a living using their new skills. 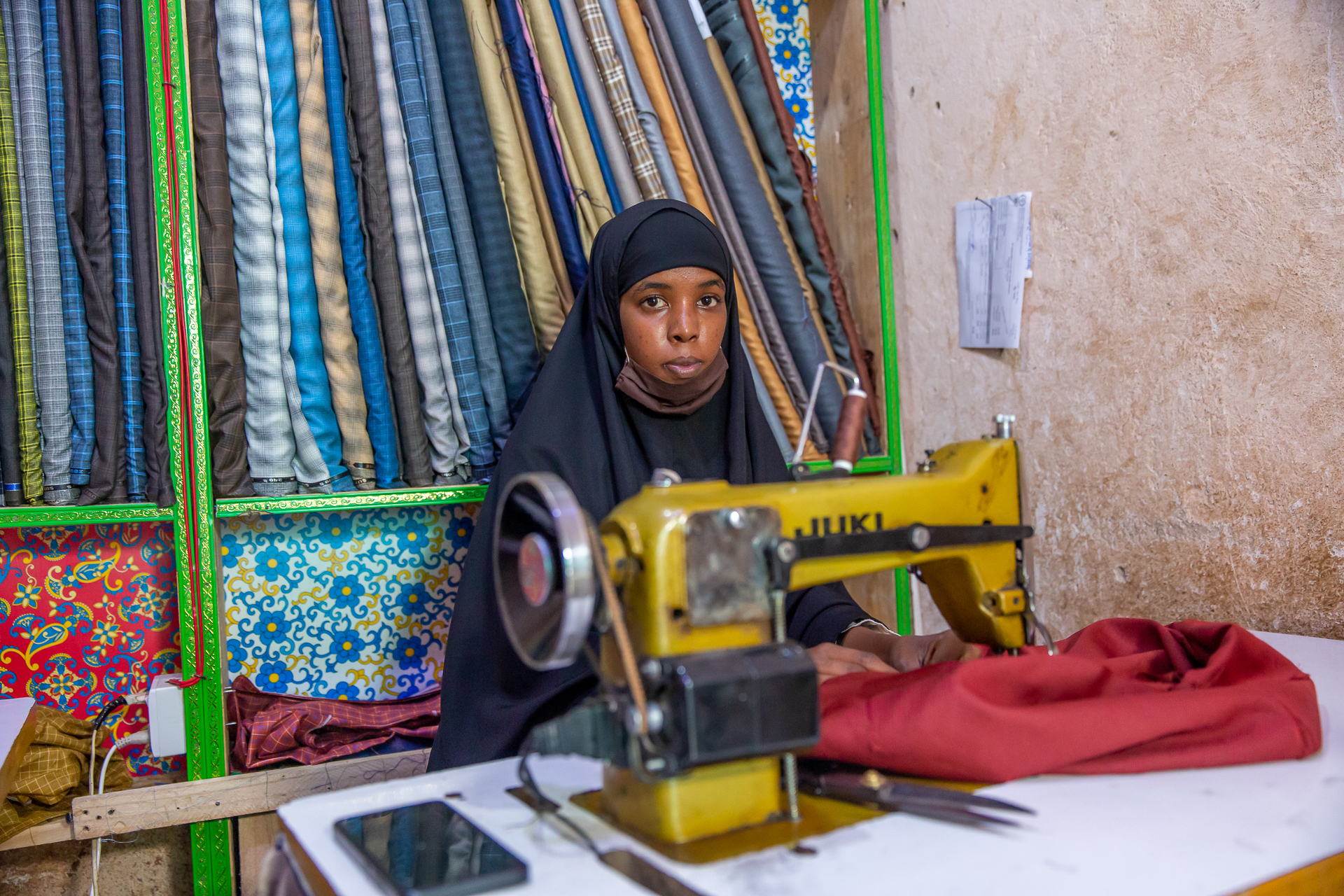 The current training programme aims to develop the skills of vulnerable and displaced people in the hopes that they can access better job opportunities. Photo: IOM/Claudia Rosel

Asma Abukar Abdulrahim, another student in Baidoa, decided to take up tailoring after learning about the training from a friend.

“After I graduated from high school, I wanted to be able to work, support my family, and pay for my university tuition,” 18-year-old Asma explains.

At the centre, Asma learned how to tailor and use a sewing machine, and how to manage her finances and improve her customer service skills.

Since completing the course, she has begun practicing at a shop owned by her friend's parents. She is already sewing dresses and hopes that the experience will lead to a proper job.

“Rolling out the programme in other districts, particularly in hard-to-reach areas where educational and skills training courses are limited, should be prioritized,” says Abdi.

IOM and its partners are working towards building the resilience of displaced people and vulnerable groups in Somalia and providing durable solutions to displacement.

This story was written by Claudia Rosel, Media and Communications Officer, cbarrios@iom.int

If you are interested in donating to relief efforts in Somalia, please visit IOM's fundraising page.