A man wades through what is left of Bujumbura’s nautical centre. Photo: IOM 2021/Armel Nkunzimana

'What are we going to do if the water does not stop rising?' That question has been on everyone's mind: Homeowners, building contractors and construction workers, farmers, market vendors, schoolchildren, commuters, and of course, development and humanitarian workers.

During the past two years persistent heavy rain, followed by floods, landslides, and strong winds, has raised Lake Tanganyika to dangerous levels, engulfing entire roads, markets, school playgrounds and churches. Welcome at first, the downpours soon began to wreak havoc on lives and livelihoods in the Republic of Burundi and across the entire sub-region. The world’s second-deepest lake – and as long as 600 km – is shared between Burundi, the United Republic of Tanzania, the Republic of Zambia and the Democratic Republic of the Congo – and none has been spared from devastation.

In Burundi alone, more than 52,000 people have been affected by flooding since March this year, according to IOM’s Displacement Tracking Matrix, although the real number is likely much higher. Almost half have been internally displaced and thousands of homes flooded.

Entire fields of crops have been wiped out – a devastating loss of at least a year’s worth of food stocks for many of the more than 90 per cent of Burundians who rely on subsistence farming.

Burundi is among the world’s 20 most vulnerable countries to climate change, as well as being one of the least prepared to combat it due to the exceptional severity of natural hazards. There were 127,775 internally displaced persons in the country as of May 2021, of which 54 per cent were women. Around 85 per cent of those displacements happened in the context of disasters.

It is cold comfort to note that the country’s emergency response is chronically underfunded. According to the Office for the Coordination of Humanitarian Affairs (OCHA), only 17 per cent of the USD 194.7 million needed for the 2021 Burundi Humanitarian Response Plan has been met. Little additional funding has gone into IOM’s recently released Burundi Crisis Response Plan 2021.

“Right now, people have no home to go back to. They don’t know when their next meal will be," says Michael Asima, Emergency and Preparedness Coordinator for IOM Burundi. “It is critical that we get more funding to respond to the immediate needs of the most vulnerable.”

In the meantime, IOM’s emergency team and humanitarian partners, working alongside the Government of Burundi, have mobilized to respond to the most urgent needs of the most vulnerable people. Top of the list is access to safe shelter, clean water, basic hygiene services and protection support.

The timing of the floods has an inescapable bitter irony to it; about the same time last year, roughly 30,000 people were displaced by flooding as the Rusizi River overflowed its banks. Many have been unable to return to their homes and continue to live with friends and neighbours, or in temporary shelter sites. The renewed flooding has further strained these host communities who are barely able to cope. 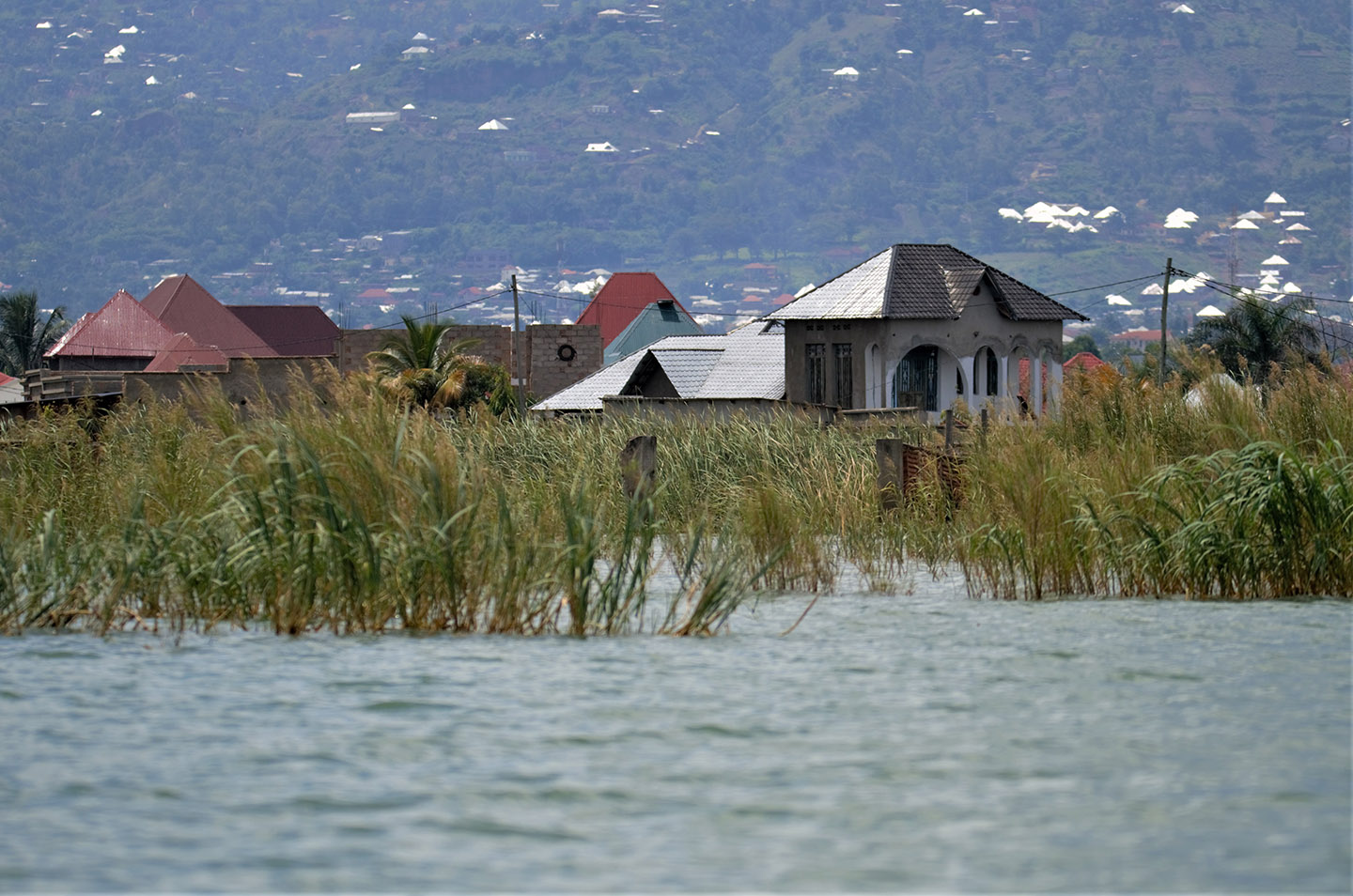 Long grass sways through an abandoned neighbourhood and a house whose white paintjob was left unfinished. Photo: IOM 2021/Lauriane Wolfe

The cost of climate change

Along some parts of the Burundi coast where the land is particularly low-lying, neighbourhoods have been abandoned, with many houses still under construction. Kingfishers dip and soar through broken windows and flourishing reeds that now fill living rooms in waters two metres deep. Invasive plants snake their way up walls and weave through unfinished roofing. The forces of nature have defiantly reclaimed the territory and forced thousands of people out.

“If this continues into 2022 the destruction will be enormous, requiring an inventory of the economic and human cost to design a recovery plan,” says Gabriel Hazikimana, Environment Director for Lake Tanganyika Authorities in Burundi.

According to data from the Geographic Institute of Burundi, the lake-rise is a cyclical phenomenon that occurs every 50 to 60 years. The current flooding is widely attributed to climate change.

“In previous years when the lake rose, the rain would stop and give time for it to go back down,” Hazikimana said. “We just did a study that shows that the temperature in the region is likely to continue increasing, and this could mean more rainfall. We will see if next year there is a miracle.”

Even if the level of the lake recedes, its sand base is at risk of contamination from polluted waters that have picked up trash and contaminated sediments (from latrines, for example). To get to school, children are forced to wade through the floodwaters, exposing them to the likelihood of illnesses such as cholera and malaria.

For the homeowners, the flooded houses represent a loss. Their foundations have been waterlogged for so long that they will eventually collapse, posing a major safety hazard to anyone who dares to return. 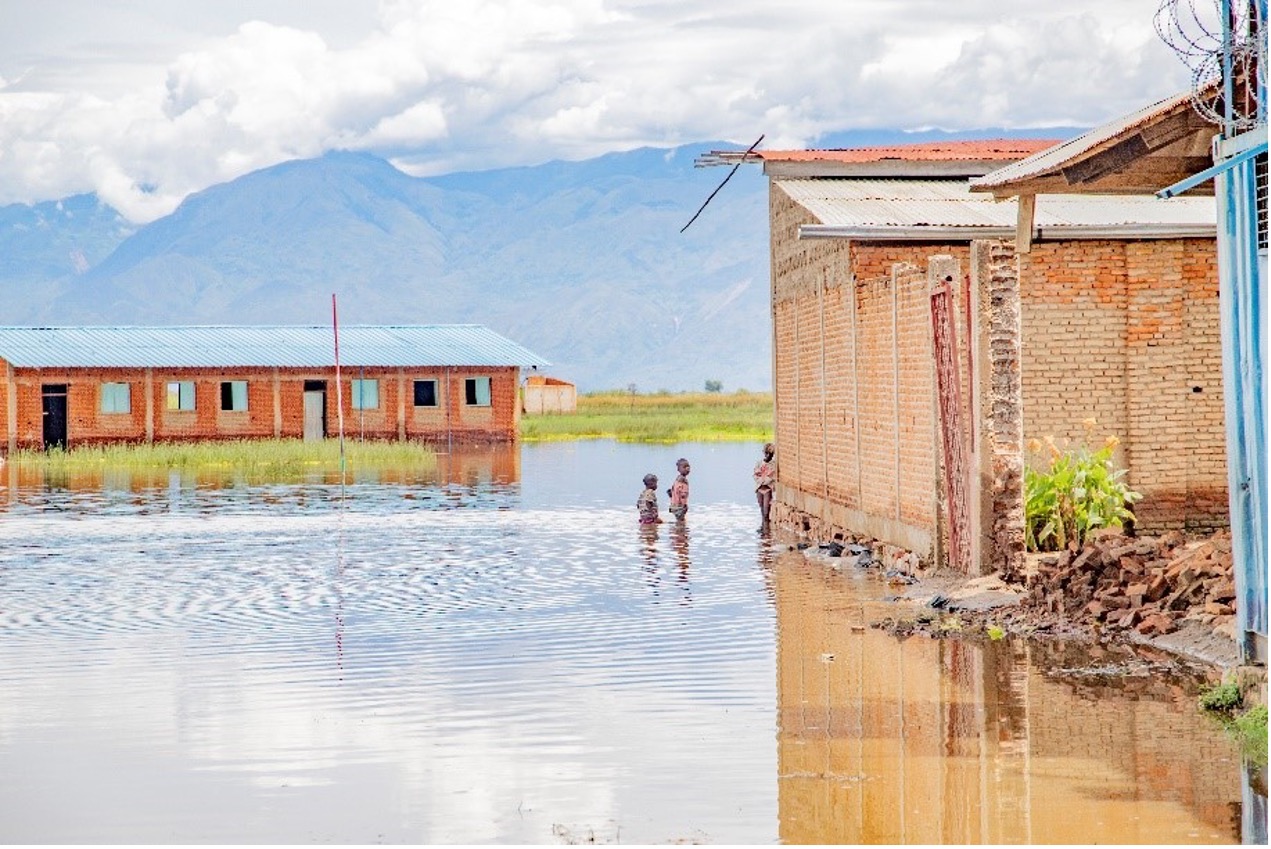 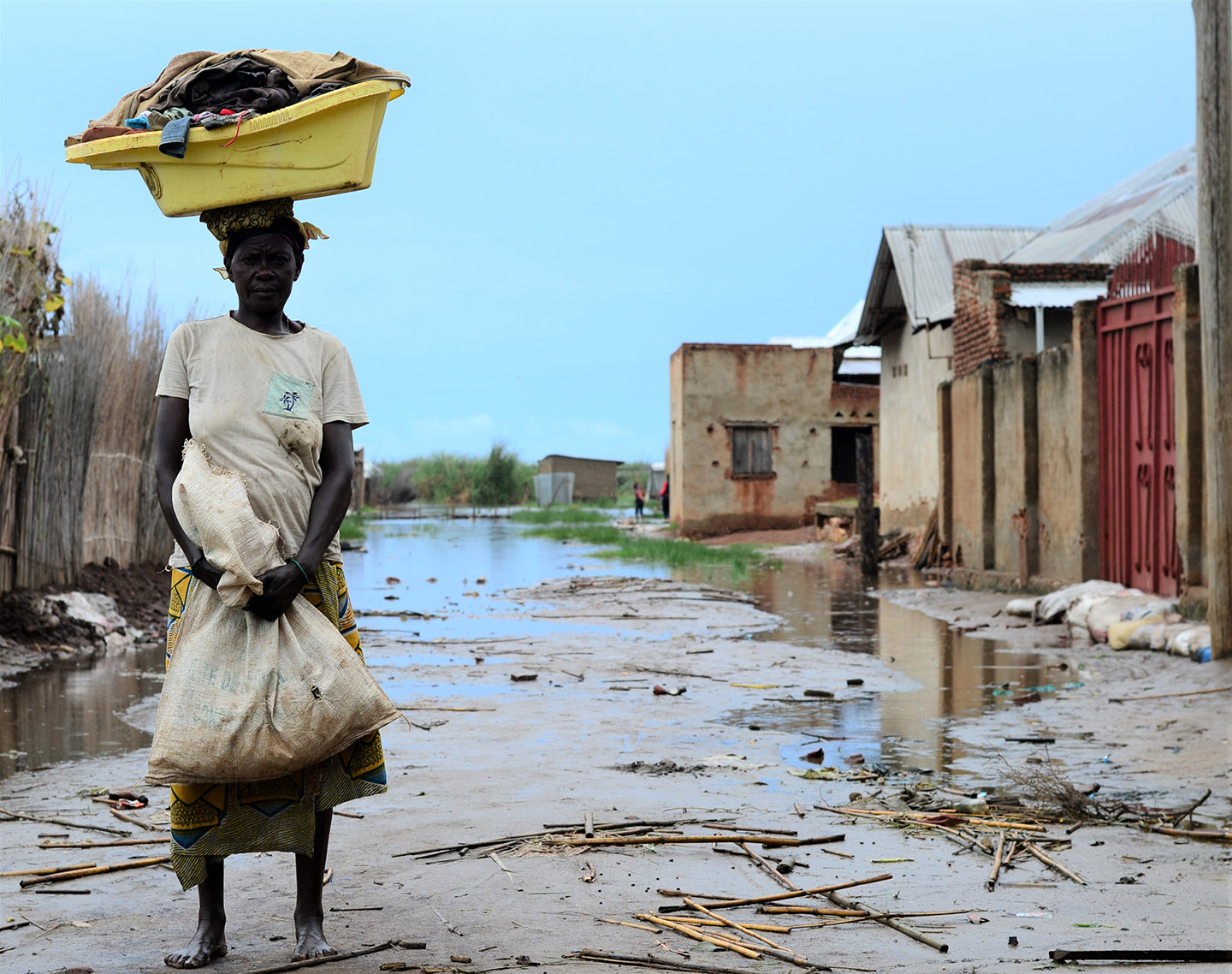 Odette, mother of five, moves her belongings out of her house, worried it will collapse. A neighbouring family has offered her temporary shelter. Photo: IOM 2021/Lauriane Wolfe

Disaster risk reduction is a priority

This dire situation has placed the spotlight on ongoing efforts to boost Burundians’ resilience to such natural hazards.

Leading the way is the National Platform for Risk Prevention and Disaster Management and IOM Burundi’s Disaster Risk Reduction (DRR) team. Together with OXFAM and with funding from the European Union, IOM Burundi is implementing the most comprehensive DRR project to date (officially launched 7 July 2020) and which will reach the whole country.

The resultant project is aimed at sustainably linking the humanitarian response with development efforts.

In practice, this entails mapping out areas at risk of natural hazards in all of the country’s 18 provinces. Just as important, it evaluates the level of vulnerability and the country’s capacity to respond to disasters and the mobility impacts, while also assisting national authorities to develop informed and up-to-date contingency plans per province.

Building a robust DRR response also requires boosting the technical expertise of national and local authorities, in addition to supporting vulnerable communities to access innovative techniques and tools to better prepare for and respond to disasters. One such technique is the Vulnerability Risk Assessment, an existing tool that IOM Burundi built on to empower communities to better cope and minimize their vulnerabilities by identifying all risk factors.

Another innovative tool in the pipeline is an online platform that will centralize all datasets, maps and reports in user-friendly formats. This will give stakeholders easy access to the information, results and recommendations used and generated by the project.

Not less important is raising awareness on disaster prevention, mitigation and on how to respond to an emergency. IOM and the Government of Burundi envisage partnering with national media to help implement prevention and response measures through early warning messages and sharing information that reaches the wider population.

Alongside these efforts to prevent future emergencies, IOM Burundi continues to provide direct assistance, with shelter and non-food items for example, thanks to funding by the Federal Republic of Germany, the United States Agency for International Development and the Central Emergency Response Fund of the UN.

Greater funding is still needed, however, to provide a more comprehensive response; both to the increasing number of people affected by the floods and to prevent even more disastrous impacts. 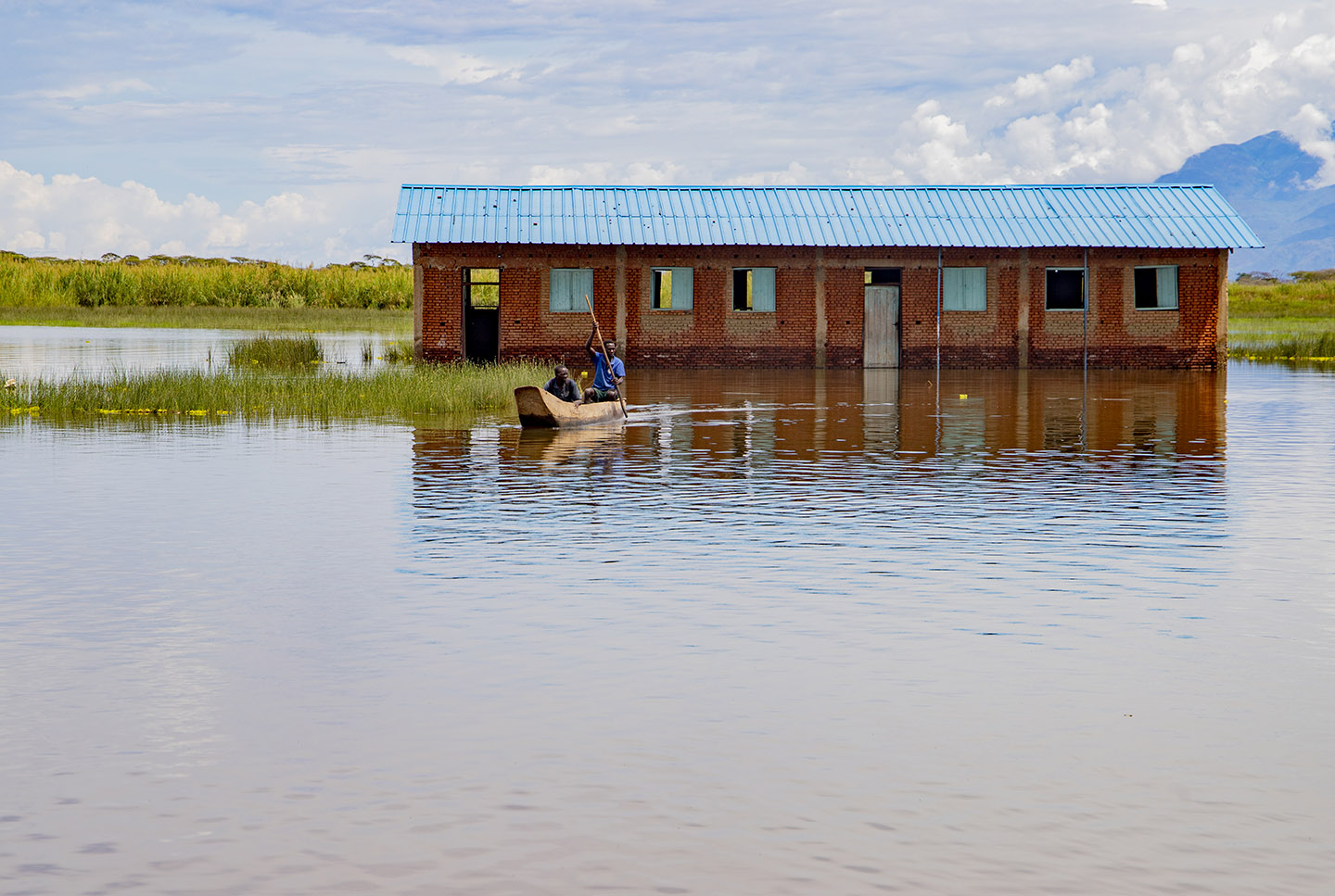 Two men paddle through a schoolyard, past the abandoned classrooms behind them. Photo: IOM 2021/Triffin Ntore