In 2016, Clement Onokhua was a 24-year-old part-time student at the University of Abuja, Nigeria, studying guidance and counselling. Clement portrayed the average Nigerian youth with his can-do spirit – young, ambitious, self-sufficient. Next to school, he worked as a phone repair technician in his shop in Gwagwalada, Abuja. He would graduate in 2017, but this dream was interrupted by a great desire to set his feet on European soil.

“The first reason I wanted to travel was that most graduates in Gwagwalada were not employed in white-collar jobs, but instead engaged in the commercial riding of motorcycles popularly called okada. I was a phone technician repairing mobile phones and selling mobile phone parts. Even when customers came to my shop to patronize me, many could not afford the bill and ask for money. This triggered me and made me believe education is nothing. You graduate without a job and end up like them, with no future,” said Clement.

“The second reason is that I have a cousin in Europe. He always told me to grasp any opportunity to travel out and that, when I get to Europe, I will become rich in six months. He said it took him three weeks to get from Nigeria to Europe.”

Spurred by the stories of his cousin and the dream of a better life in Europe, he decided to take the next step. He contacted the boga (smuggler) he had been referred to by his cousin, who requested for NGN 500,000 (or over USD 1,200) as payment for the journey. In a bid to raise the cash, Clement left university, sold his shop, borrowed some money, and paid the fees. This is how his journey began. Tragically, reality was different from what he was told.

The three-week journey turned into a three-year nightmare.

“I saw people die of thirst right in front of my eyes. We were humiliated, tortured, and beaten. I was enslaved and forced to do hard work on the farms. I had to pay to be released. While trying to cross the Mediterranean Sea to Europe, I was arrested by the Libyan coast guard before IOM (the International Organization for Migration) assisted us to return home.”

Clement’s disappointment turned out to be a blessing in disguise. Upon his return to Nigeria in 2018, he met a famous Nollywood producer, Lancelot Imasuen, who was at the airport filming stories of returning migrants for a documentary. Lancelot immediately took a shine to Clement because of his passion for cameras and filmmaking and offered him a scholarship in his school, the Benin Film Academy. This once-in-a-lifetime meeting marked the beginning of Clement’s journey as a filmmaker and cinematographer.

“The following day someone from the academy called me. They welcomed me as if I was family. I studied cinematography for six months and, afterwards, we made our first student film and started working with Lancelot.”

Clement went on to produce his first short film titled “Abuse”, a movie released in January 2021 that sheds light on gender-based violence in Nigeria. The movie, which is published on Clement’s YouTube channel*, was produced in collaboration with a collective of returnees who have developed their creative skills in music, theatre, and cinematography. Within the different initiatives, they also interview potential migrants on what can be done to reduce the risks that can be associated with irregular migration and human trafficking. 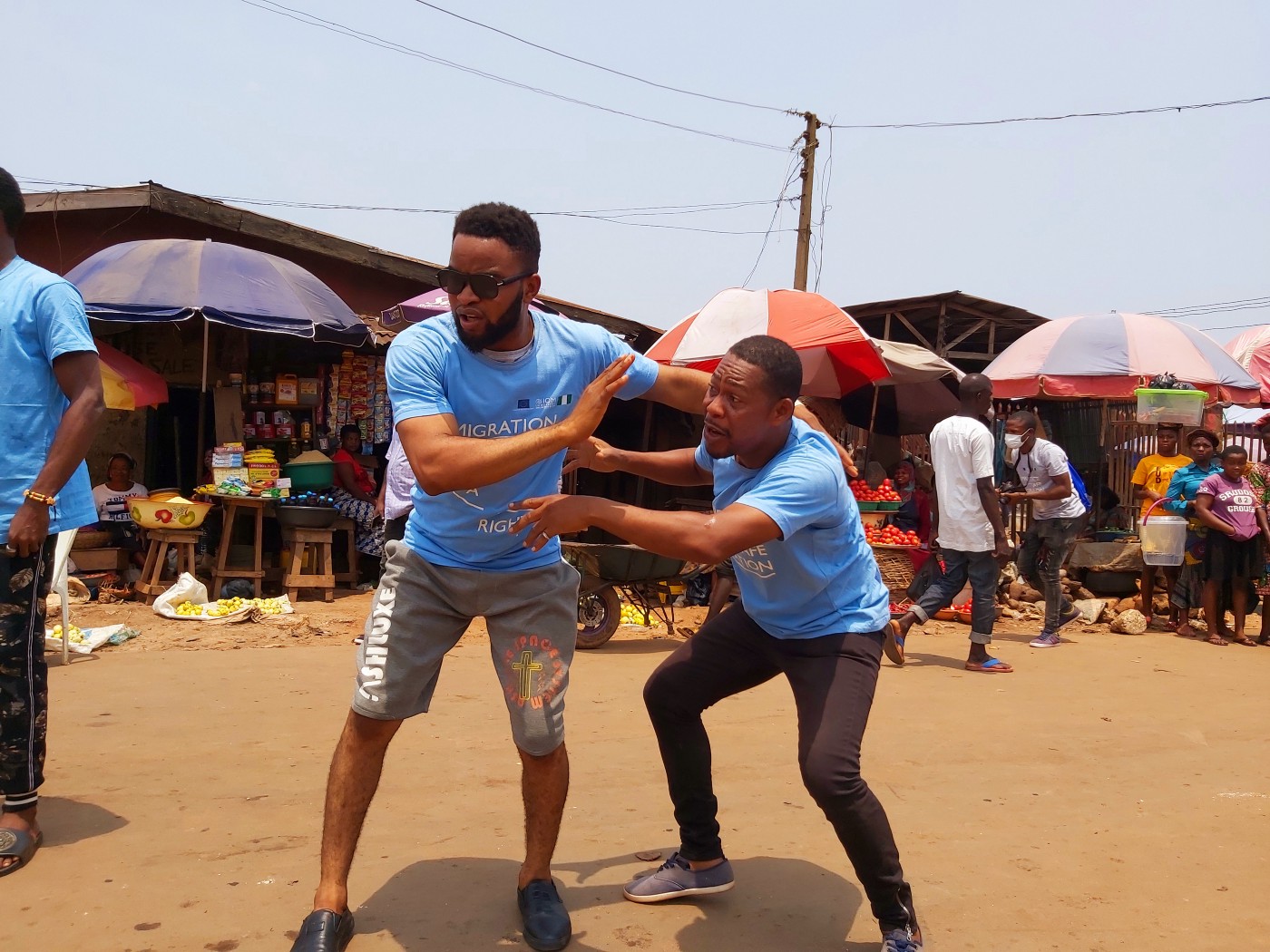 Clement acting during the community theatre play, ‘Dance of a migrant’ at a market in Benin city. Photo: IOM 2021/Elijah Elaigwu

Though the life of a young filmmaker has its own challenges including financial constraints, the positive feedback he received after the release of the movie has given him a lot of courage to carry on.

“The movie, ‘Abuse’, has opened doors to other small production companies and to more chances for short films and documentaries. I have received great feedback,” explained Clement.

Clement is motivated by passion. Not only did he change his career from a phone technician to a filmmaker, but also, he brought his migration experience and creativity to become a Migrants as Messengers (MaM) volunteer in Benin city, Nigeria.

“I have learnt a lot as a MaM volunteer. I got the inspiration for my short film, ‘Abuse’, during one of our sensitizations in Benin city when a little girl shared her story with me. She told how she was promised heaven and earth by her aunt and met an entirely different reality in the city where she was maltreated by her aunt and suffered sexual abuse. I have been able to teach people. It has also helped me develop more skills like building interpersonal relationships and team leadership.”

His major focus in film production is on irregular migration, trafficking in persons, and child abuse in Nigeria. In the near future, the aspiring filmmaker plans to produce internationally recognized movies on migration, to change the narrative around returned migrants and share his experiences.

“In the next 10 years, I see myself producing international migration movies, and when people begin to ask who produced them, I will say I am a returned migrant and a MaM volunteer. I want to share real stories, change mindsets, and remind people to do the right thing. I want to get testimonies from people whose lives I have touched and train people to use films as a medium to share information on safe migration.”

His message to fellow young creative people is simple and apt: “Try as much as possible to use your creativity to touch people’s hearts.”

*Clement’s short film, ‘Abuse’, can be found on his YouTube channel here:  www.youtube.com/watch?v=bVltIZ82I-E