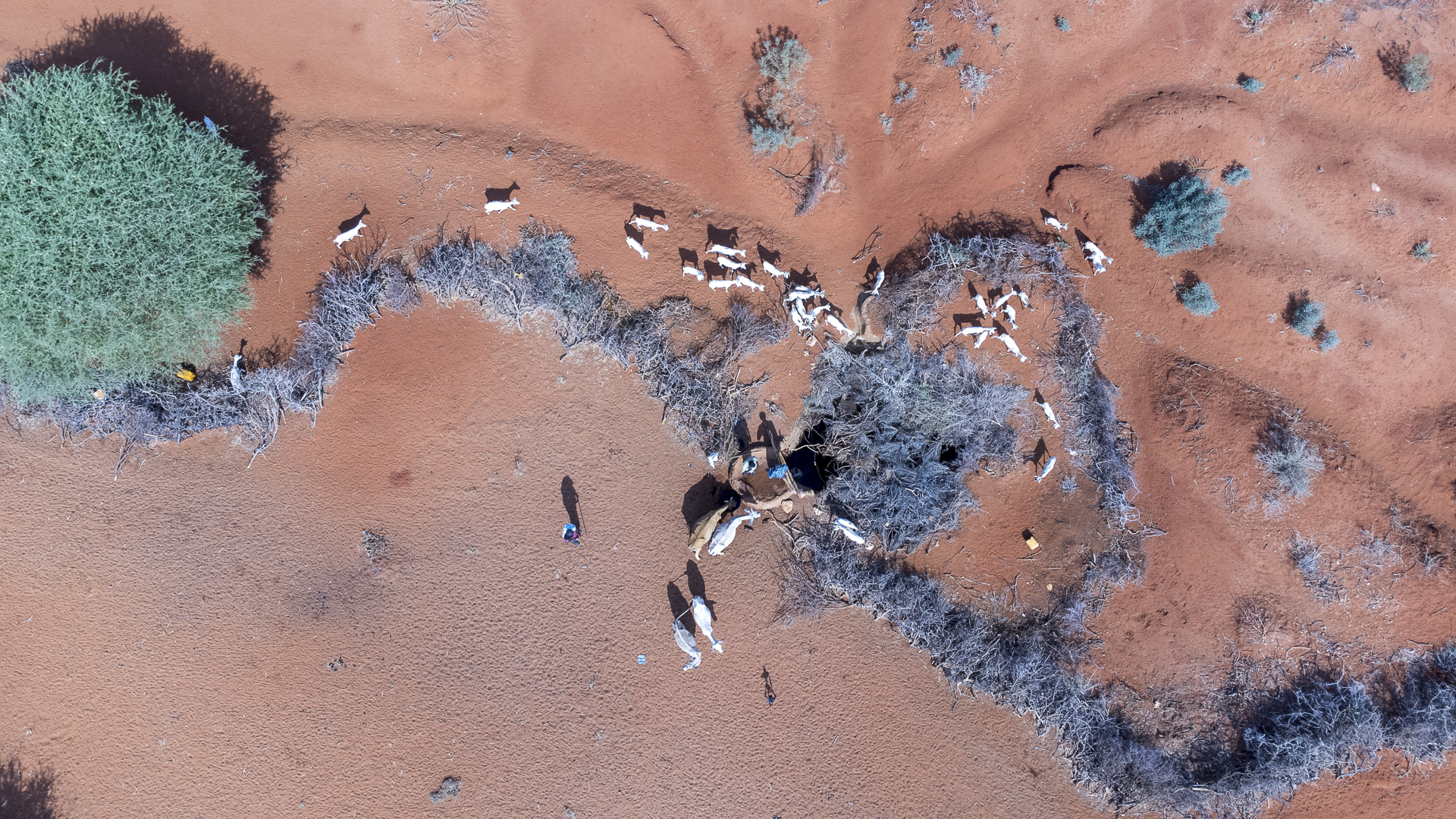 Bilcil, 13 July 2022 – “He was killed while searching for firewood,” said Abdi, a resident of the drought-stricken town of Bilcil, Somalia. “People are fighting over trees.”

The young man in Abdi’s village was a schoolteacher whose cattle died due to the ongoing drought affecting the country – the most severe in recent history. He is just one of the many victims of a fundamentally destabilizing phenomenon that is climate change.

The scarcity of water, soil erosion and depleted grazing land negatively impact the livelihoods of hundreds of thousands of Somalis who, like Abdi, depend heavily on these natural resources to thrive.

“With large parts of Somalia ravaged by deforestation and overgrazing, tensions over water and land are increasing,” said Rikka Tupaz, Community Stabilization Officer from the International Organization for Migration (IOM) in Somalia. “Deforestation, droughts, floods and other economic shocks have exhausted the coping mechanisms of many agro-pastoralist communities.” 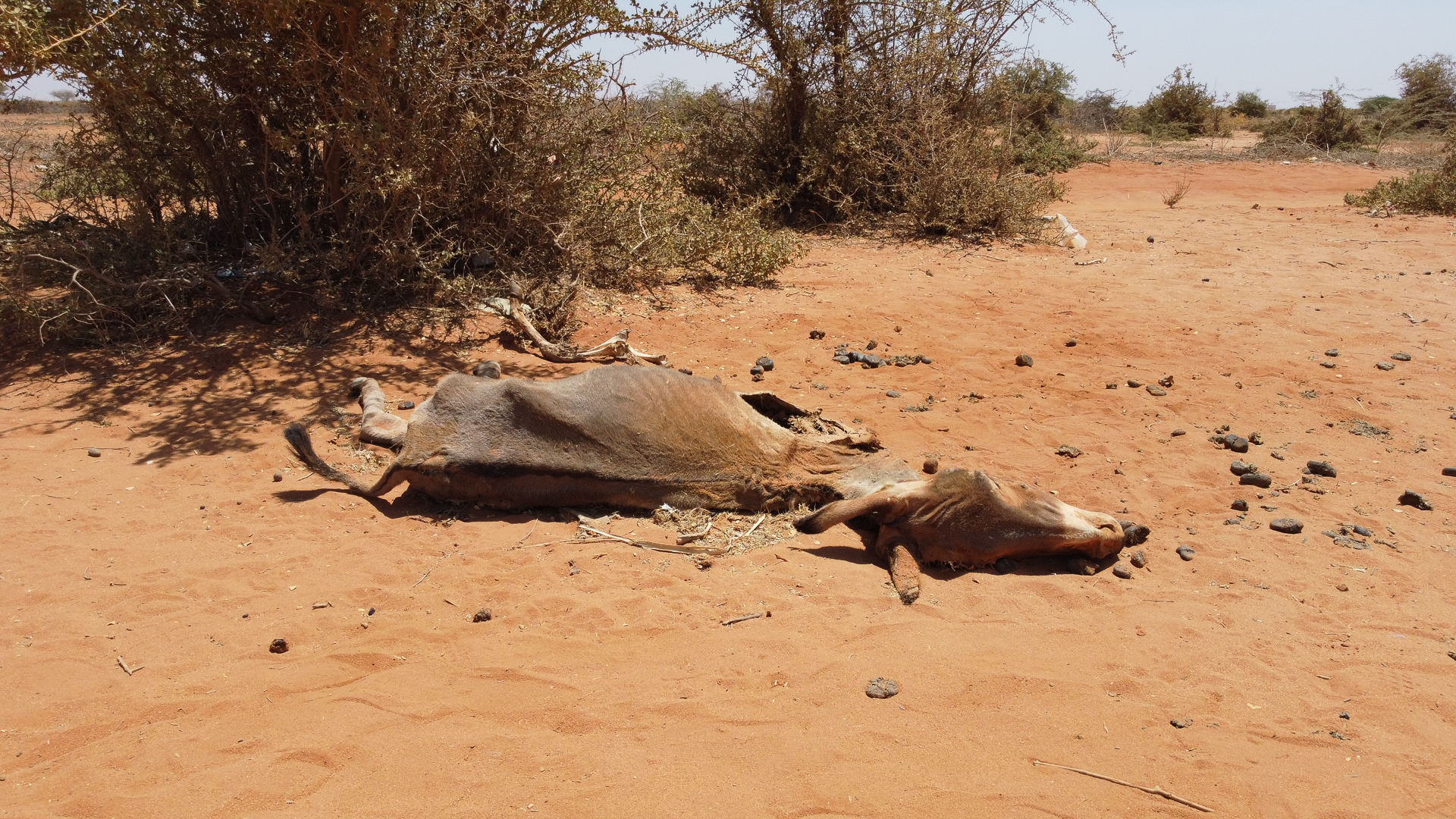 Thousands of animals have perished due to the extreme drought ravaging Somalia and the rest of the Horn of Africa: Photo: IOM

Massive livestock deaths due to drought have been reported across the country this year. Herds of cattle – often the only source of income and food for many Somali families – have perished, and farmers are being forced to turn to illicit practices as an alternative livelihood source. One of them is collecting firewood to trade it in the charcoal business.

Charcoal has become a vital livelihood opportunity for some populations in Somalia affected by environmental hardship, displacement, and conflict. Demand for charcoal remains high in Gulf States, and exports from Somalia continue despite the ban imposed by the Government in 2012.

But sourcing firewood for charcoal production can come at a high price for both communities and the environment. The charcoal industry – largely controlled by violent extremist groups – is increasing tensions amongst communities and driving communal conflict. Those looking for firewood often find themselves in disputes with other locals and, at times, it can even result in death.

“That young man was a schoolteacher. He used to pay for his education by selling firewood because his family could not afford to support him,” said Abdi, recounting the killing of a young man from the community. “On a Friday morning, he went to the bush to collect firewood as he usually did, then his body was found with an axe on his head.” 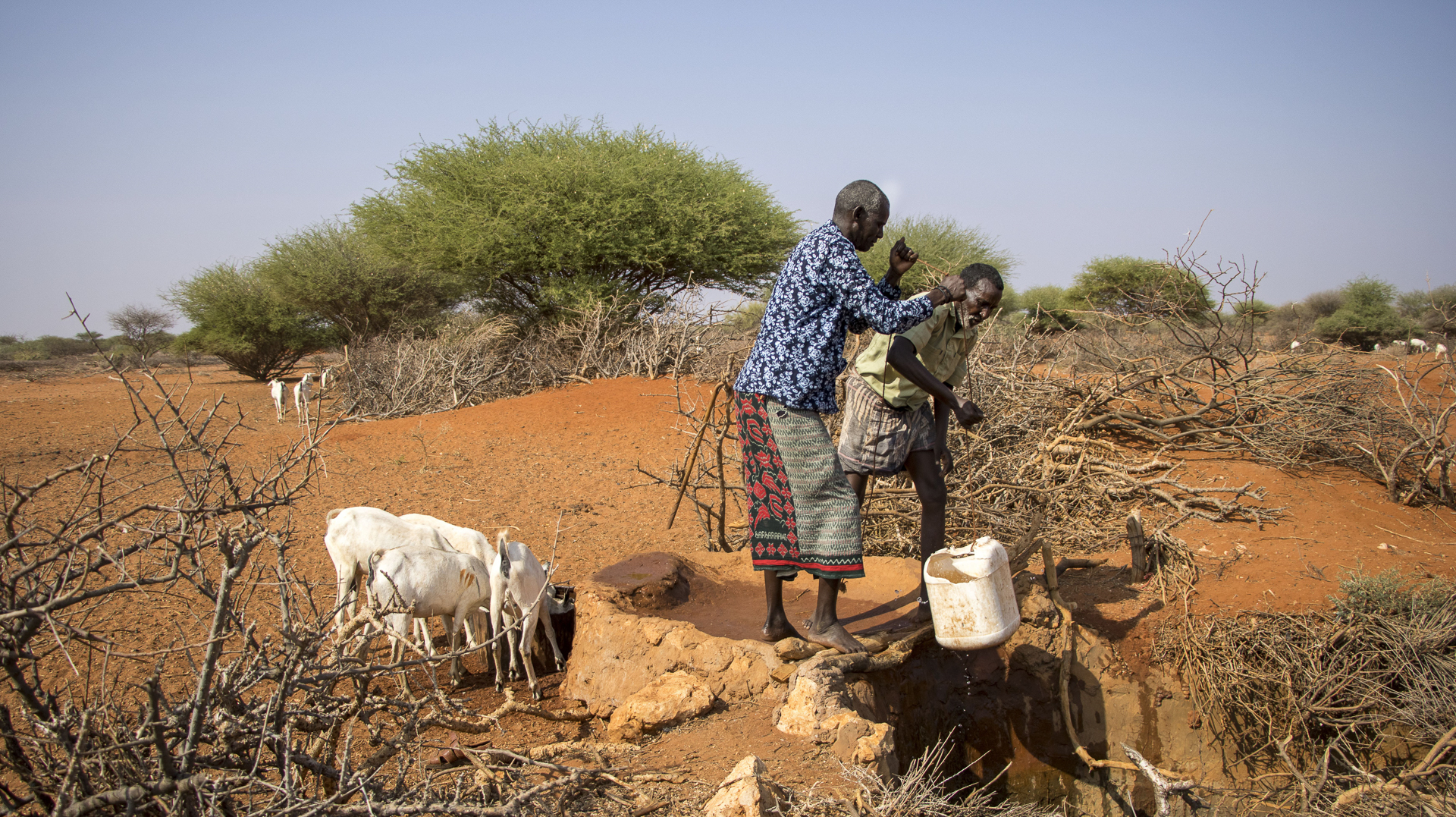 In Bilcil, many pastoralists are resorting to alternative livelihood options as water sources dry up. Photo: Ismail Salad Osman/IOM

According to villagers in Bilcil, deforestation is causing more soil erosion and drought, and some people will go as far as killing others to preserve their land.

“Worsening living conditions forced us to collect firewood in nearby areas and sometimes in Ethiopia,” said Karar, another pastoralist from Bilcil. “They are stopping us from cutting down the trees.”

As climate change alters pastoralists’ traditional seasonal migration patterns, they are developing new livestock and agricultural strategies and often traverse unfamiliar territory in search of pasture and water for their livestock, contributing to land disputes.

Intercommunal conflict in Somalia accounts for between 35 to 40 per cent of all violence. Most of the disputes are over access to land and water for grazing and cultivation.

In a vicious cycle, clan militia and extremist organizations use the climate crisis to their advantage – mobilizing and recruiting youth for the violent prosecution of land claims. Simultaneously, they are taking advantage of climate pressures to contest weak government institutions and consolidate their power by imposing taxes on charcoal and other natural resources.

“It’s becoming clear that climate change is exacerbating conflict and displacement in Somalia as farmers compete over limited natural resources to survive,” said Frantz Celestin, IOM Somalia Chief of Mission. “The short-term consequences are violent clashes, but the long-term outlook is a threat to peace in a country which has already suffered three decades of protracted conflict.”

Climate change and environmental degradation are also reducing scarce water resources, forcing communities to migrate and confront one another for control over diminishing ecological yields.

According to a Climate Risk Profile by the consultancy Weathering Risk, temperatures in Somalia will rise between 1.4 – 1.9 °C by 2030 compared to pre-industrial levels. The annual number of very hot days – with daily maximum temperature above 35 °C – is also set to increase, with central Somalia being the worst affected. Added to this, overall water availability per capita could halve by 2080, underlining the acute need for long-term climate and conflict mitigation strategies. 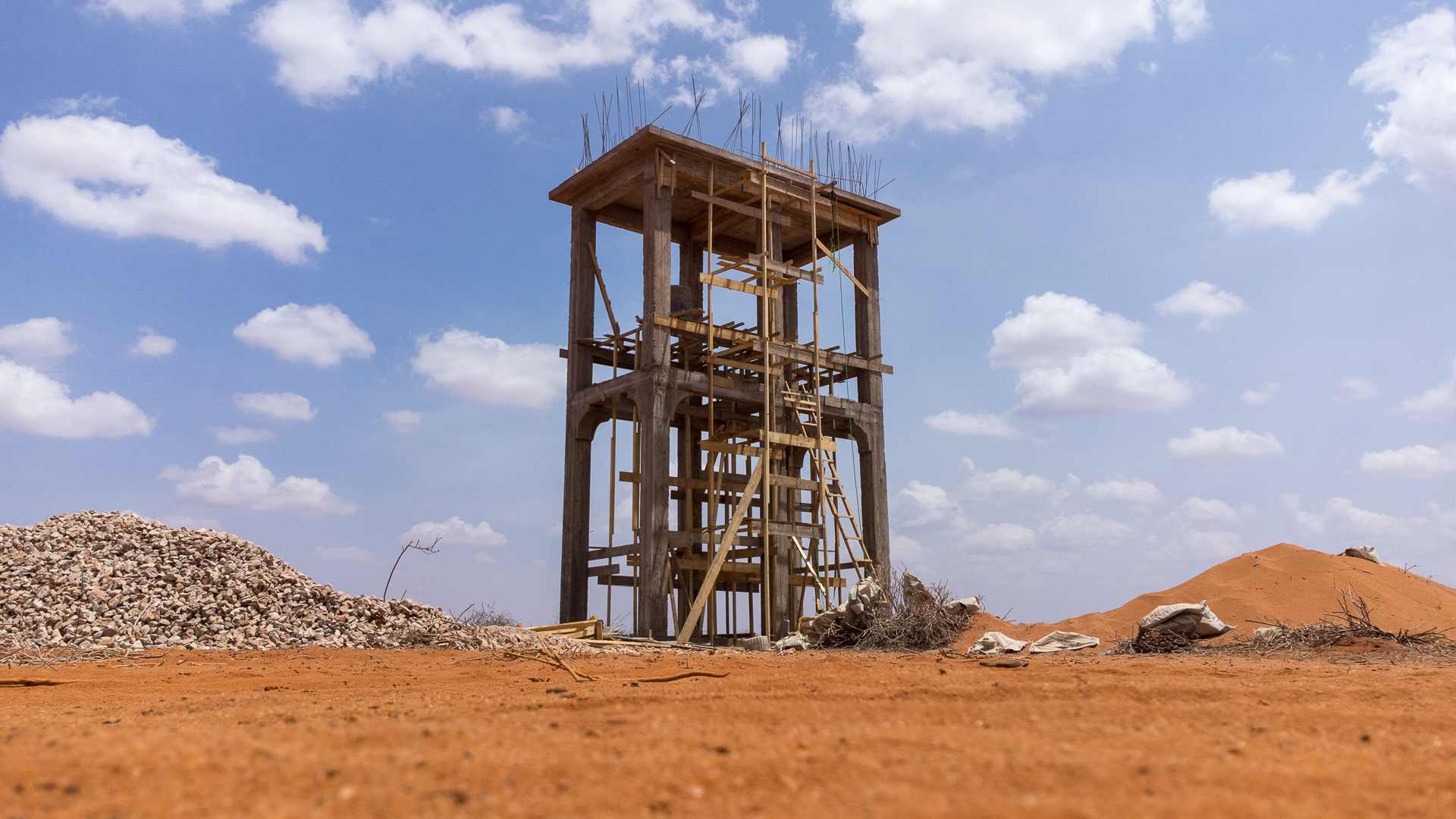 The worsening situation has prompted a EUR 6 million agreement between the IOM and the European Union that will aim to tackle the effects that climate change is having on rural communities in the state of Galmudug – one of the driest places in Somalia – while addressing conflict over scarce resources.

Over a period of 18 months, IOM will help communities create management tools and dispute resolution mechanisms linked to a lack of resources to curb the escalation of climate-induced violence. The Organization will also restore or build water catchment systems in conflict-prone rural areas, and crucially, empower women to lead cross-clan dialogue and management of natural resources.

Throughout the project, IOM will also collect data on transhumance movements to map pastoralist routes and identify future solutions to natural resource-driven conflict.

The climate-conflict mitigation programme is the first of its kind in the Horn of Africa region and its goal is to reduce violence and instability by increasing communities’ access to natural resources. The project will involve the Somali Ministries of Energy and Water, Interior, Women, Environment and Livestock, with the United Nations Environment Programme having an advisory role. 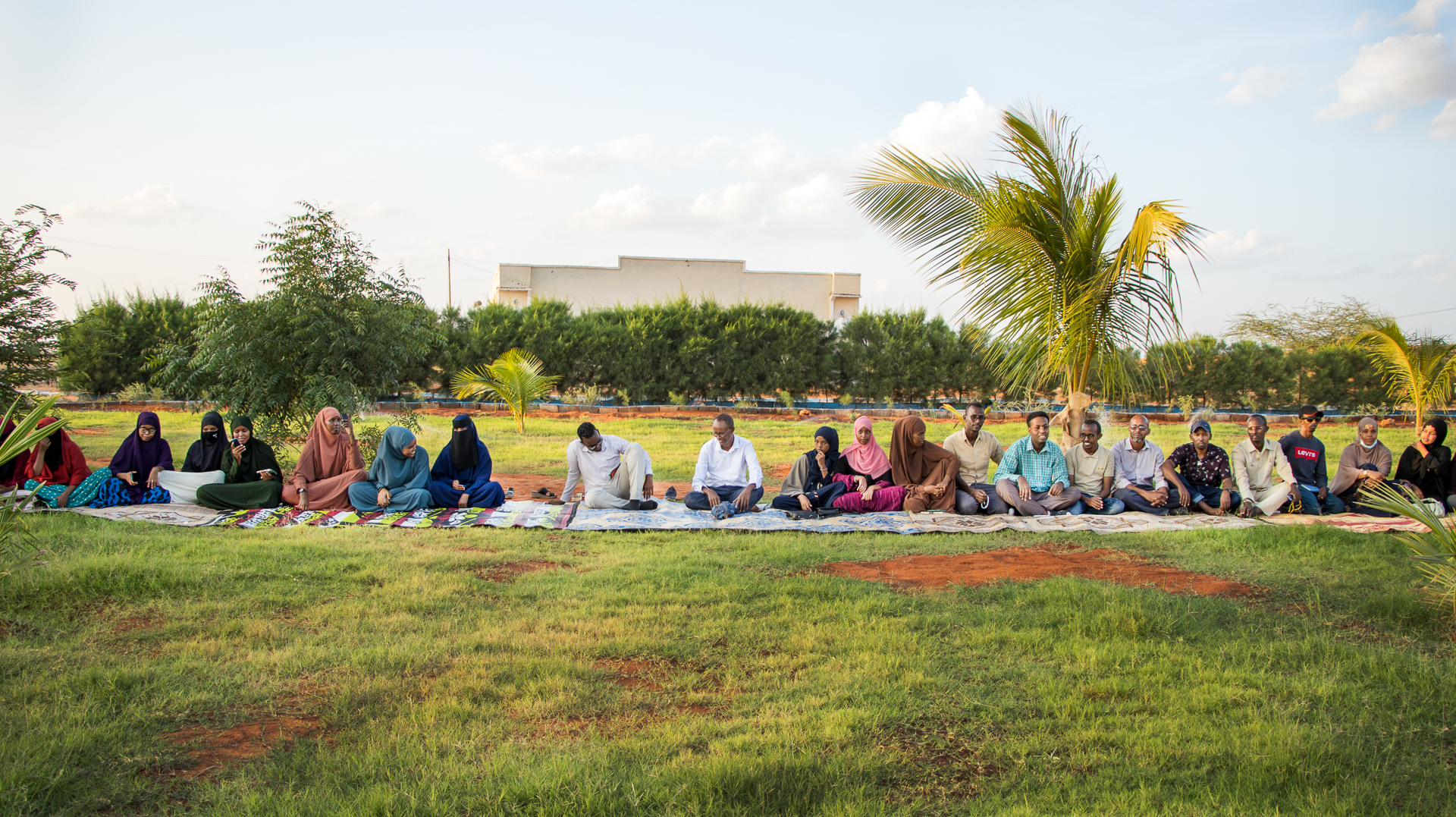 IOM facilitates community dialogues with women and men in towns across Somalia to find solutions to the climate crisis. Photo: IOM/Ismail Salad Osman

It also includes a partnership with the Stockholm International Peace Research Institute (SIPRI) to conduct research to advance knowledge and policy on sustainable ecosystems and climate adaptive behaviour.

As recurrent droughts continue to cause crop failures, food insecurity, and loss of livelihood, record-high numbers of people continue to be internally displaced in Somalia. There are an estimated 2.9 million internally displaced persons (IDPs), which has only increased the pressure on urban centres, such as in the capital city Mogadishu, where migrants arrive to live in poor conditions and struggle to integrate and find employment.

Further displacement into major cities can create tensions with host communities that already face limited access to water or health care services. In some cases, smaller incidents have grown into significant clan conflicts. In December 2019, a violent clash broke out between two clans over resources in the water-scarce Mudug region, north-central Somalia. The fighting led to the death of more than 100 people and left many more injured, causing the displacement of hundreds of families.

“The project aims to equip Somali communities with the best tools to mitigate climatic shocks,” said Tupaz. “In this way, it will also have roll-over effects of bridging peace in an area where communities have historically fought over natural resources.” 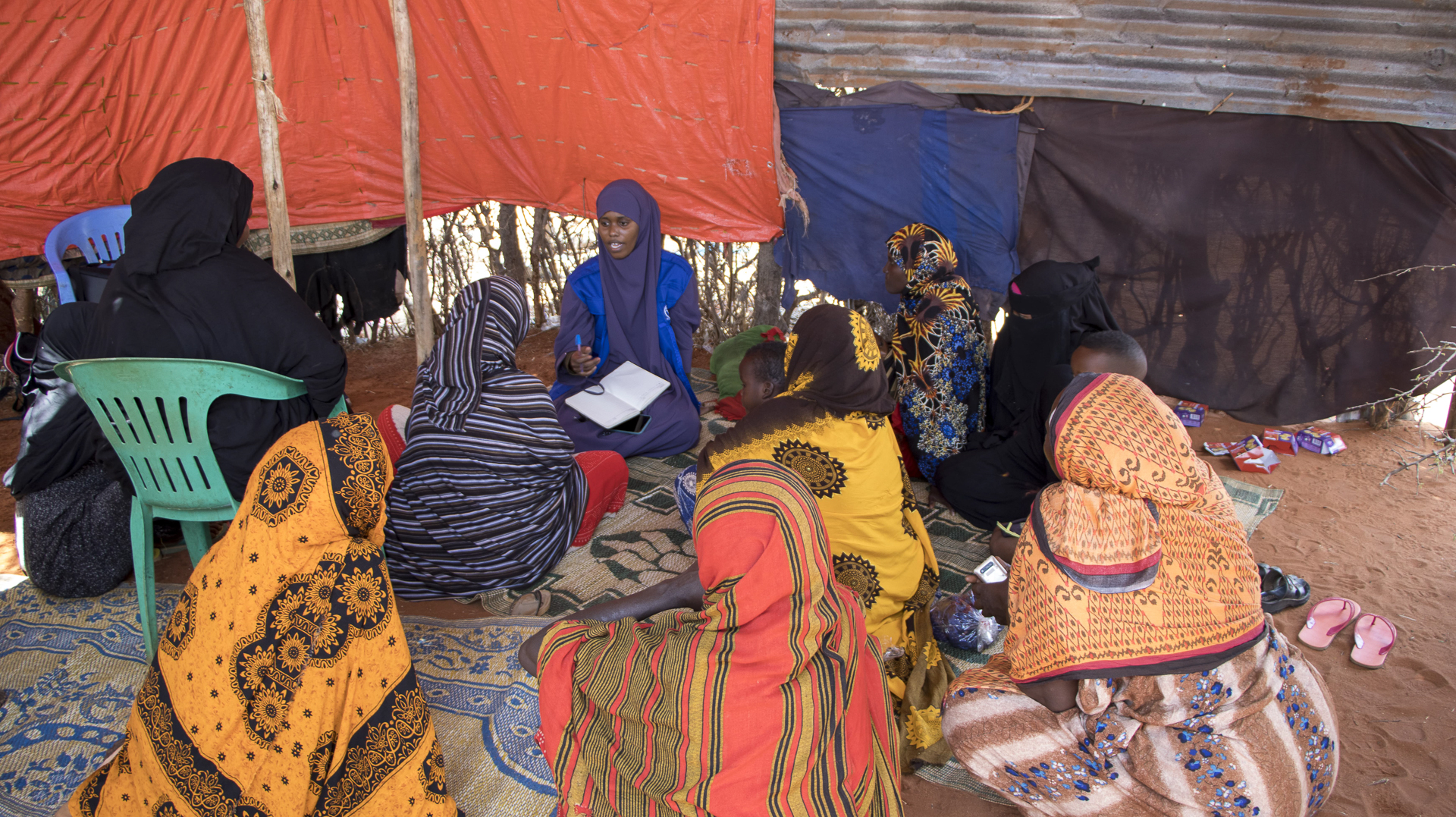 A community dialogue with women from Bilcil and surrounding areas to discuss challenges and solutions to the conflict and climate situation. Photo: IOM/Ismail Salad Osman

If successful, IOM hopes to replicate the model in other parts of Somalia and the world, where vulnerable rural communities are facing the worst consequences of climate change.

Ministers at the 26th UN Climate Change Conference of the Parties (COP26) in Glasgow last year agreed to a USD 350 million Adaptation Fund, and to a USD 600 million Least Developed Countries Fund to help vulnerable people bolster resilience to the worsening impacts of climate change. But this funding is not enough compared to the billions needed to close the gaps in climate adaptation.

“That is why climate mitigation and adaptive solutions are fundamental. With good planning and strong community support, we hope to see results,” added Celestin.