Desperate for a Fresh Start: Ethiopia’s Displaced Yearn to Rebuild Their Lives

East Harerge, Ethiopia – “We ran for our lives, carrying nothing and seeking safety,” says Nuria Yusuf, a young Ethiopian mother of three, as she recounts the moment her life changed forever.

Attacked in her home at night by men carrying weapons, Nuria only had time to grab her children and, miraculously, managed to escape. “The day was Tuesday; a day I will never forget,” says Nuria.

It has been more than four years since Nuria, and many others, fled their homes and found temporary shelter in a collective site for the displaced in East Harerge, Ethiopia. With no end to their displacement in sight, they yearn to live a normal life again. 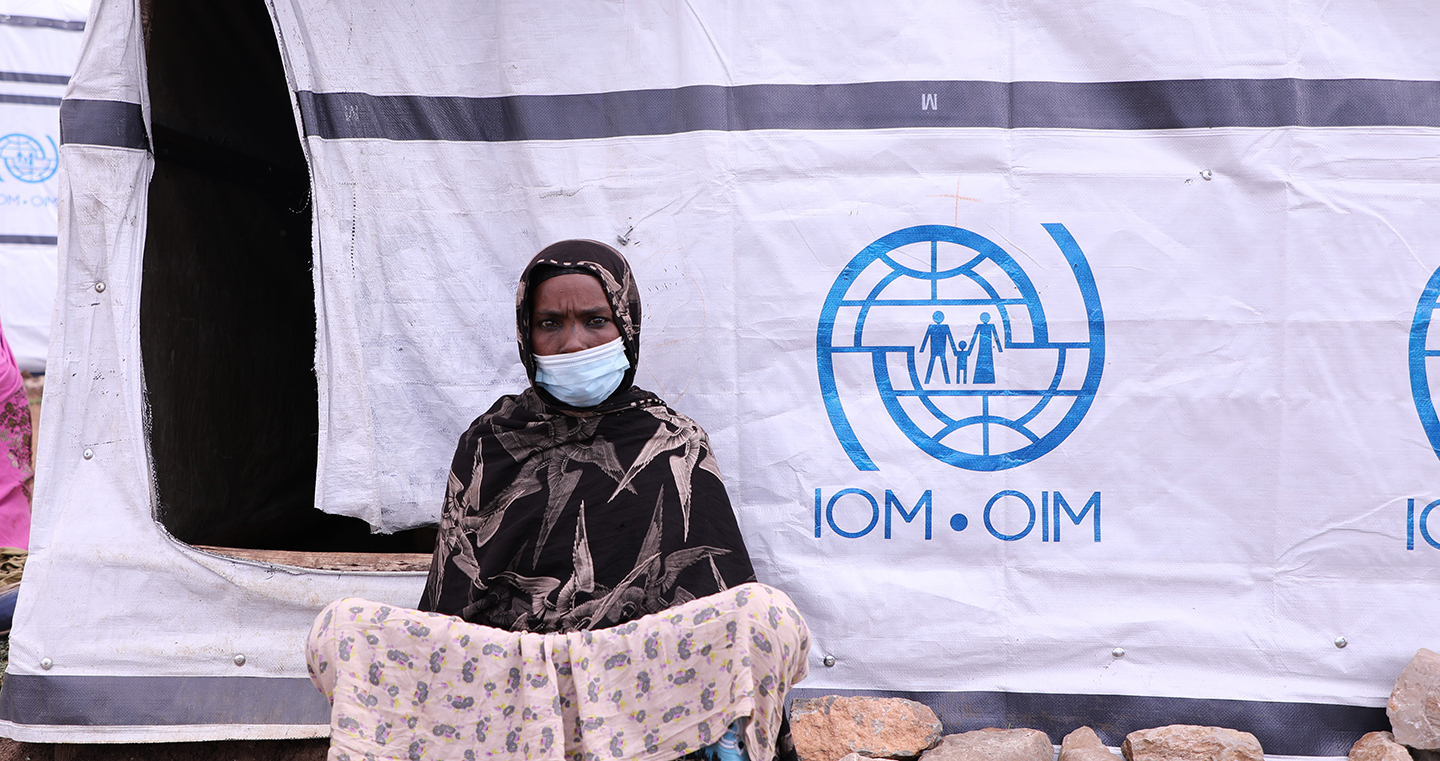 Nuria Yusuf outside her shelter at Kersa collective site for IDPs in East Harerge zone in Oromia region of Ethiopia. Photo: IOM/Rahel Negussie

Territorial disputes and clashes between ethnic groups living in border areas of Oromia and Somali regions erupted in December 2016, with renewed clashes spilling into 2017, killing hundreds and forcing more than 1.5 million people to flee their homes.

While some displaced groups were returned or relocated by the authorities, four years later Nuria and thousands of others remain displaced in collective sites or secondary displacement locations, with zonal authorities asking the International Organization for Migration (IOM) to continue providing support in some sites.

According to the 2021 Global Report on Internal Displacement by the Internal Displacement Monitoring Centre (IDMC), there were 55 million internally displaced persons (IDPs) across the world at the end of 2020, 48 million because of conflict and violence, and 7 million because of disasters. This is the highest number ever recorded, with Ethiopia among the countries with the highest rates of new internal displacements from conflict. At the end of 2018, there were 2.9 million new conflict displacements in Ethiopia, the largest number globally. In addition, more than 290,000 were displaced in Ethiopia by disasters, according to IOM’s World Migration Report 2020.

While conflicts, disasters and other crises have focused the world's attention on refugees and migrants, the dire situation of the world’s 55 million IDPs – particularly in Ethiopia – has gone mostly under-reported and is virtually invisible.

Since fleeing the conflict in 2017, Nuria and other families have been living at the Kersa collective site for IDPs, also known as Kersa town site, set up in the East Harerge zone of Oromia region, Ethiopia. They live in what was a government technical and vocational education training (TVET) centre.

The large, hall-like buildings at the centre have hosted almost 200 h­­­­­­ouseholds. For a long time, they were not partitioned, which afforded no privacy – especially for women. As such sites are severely under-served by humanitarian actors, people here also faced limited access to basic services such as health, water and sanitation facilities, and schools for their children.

In 2019 IOM, with the support of several donors, started implementing Camp Coordination and Camp Management (CCCM) initiatives at the site to complement government efforts. IOM’s CCCM interventions focus on service coordination, including information management; maintenance and upgrading of the site; mobilization of the community for self-governance; as well as training government and NGO counterparts, and IOM staff, on CCCM best practices.

IOM is working closely with the woreda administration, or the local level administrative division of Ethiopia, and the Disaster Risk Management Office (DRMO). The TVET blocks have been partitioned and shelters made of high-density polyethylene sheeting added to accommodate 1,275 IDPs in safer and less crowded conditions. 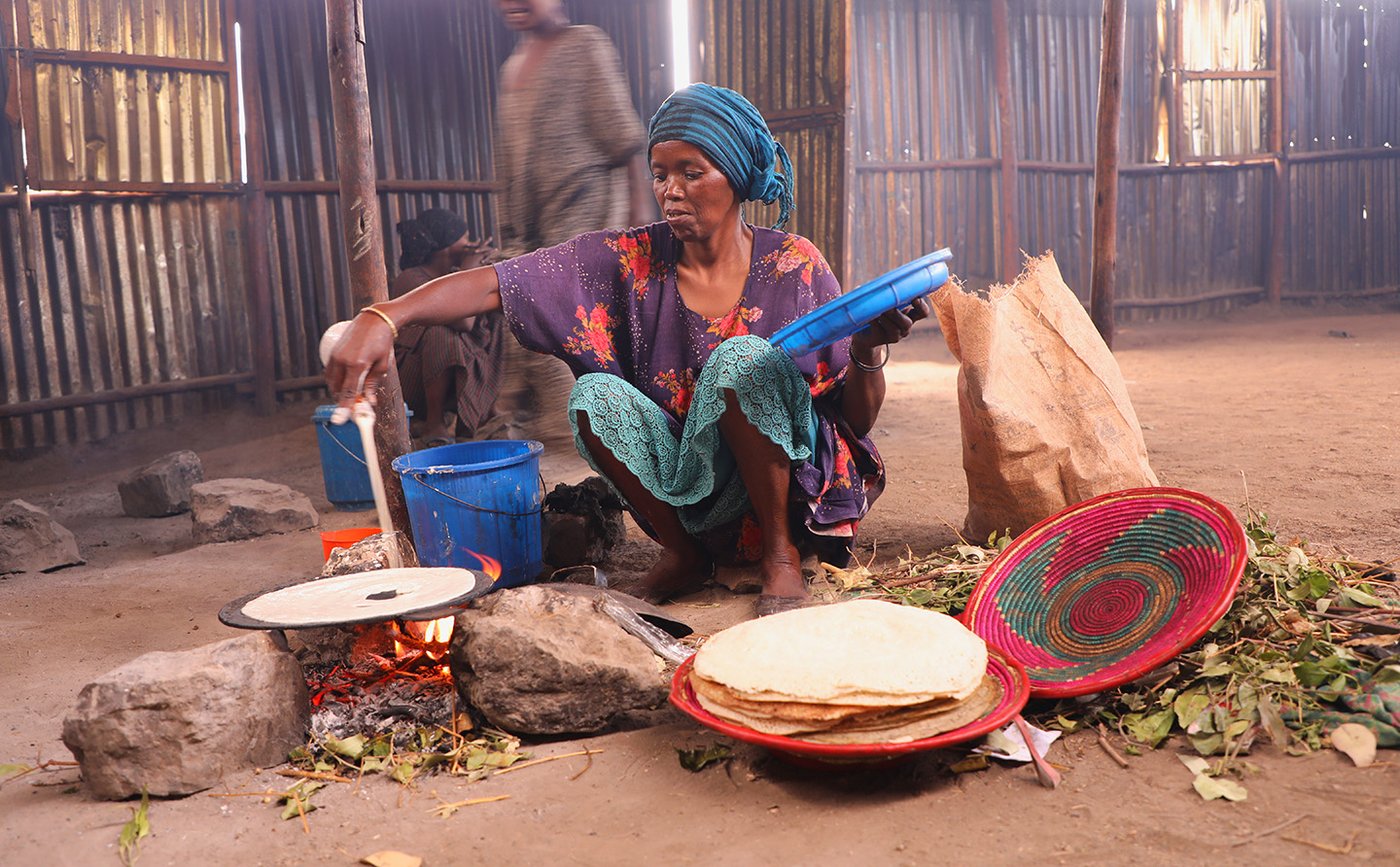 IOM has also helped to establish site management, youth, and women’s committees to empower the IDPs at the site to represent themselves vis-à-vis government officials. Following feedback from the committees, site upgrade activities are ongoing, including the building of partitions as well as communal kitchens and a shed for community activities and gatherings, with the participation of IDPs.

Inadequate lighting within the site created safety risks for women, children, and the elderly after dark but following consultations organized as part of IOM’s pilot Women’s Participation Project at the Kersa collective site, solar lights have solved the problem. IOM has also empowered women to raise awareness on COVID-19 and to implement measures to mitigate the spread of disease in the site.

However, despite these improvements, Nuria, who is a member of the women's committee, cannot hide the concern she has for her future and that of her children. “For now, we are staying at this site, but we cannot continue to live here, detached from our families and with no source of income. We want to start rebuilding our lives and to send our children to school again,” she says.

Displaced mothers like Nuria hope to start rebuilding their lives and to send their kids to school again. Photo: IOM/Rahel Negussie

Similarly, nearly 140 people who were also displaced by conflict in 2017 are living at the Chelenko Food Store site in Meta, East Harerge. They were first sheltered in the local administration hall but after flooding they moved to a school, then to the current site, which is a large warehouse that once stored agricultural products.

Hindya Abdellah, a 40-year-old woman, was displaced from the Somali region and moved to East Harerge. “Due to the conflict, I have been forced to raise my children alone as my husband did not join me after we were displaced. It is not easy to find a job to sustain us,” she says. 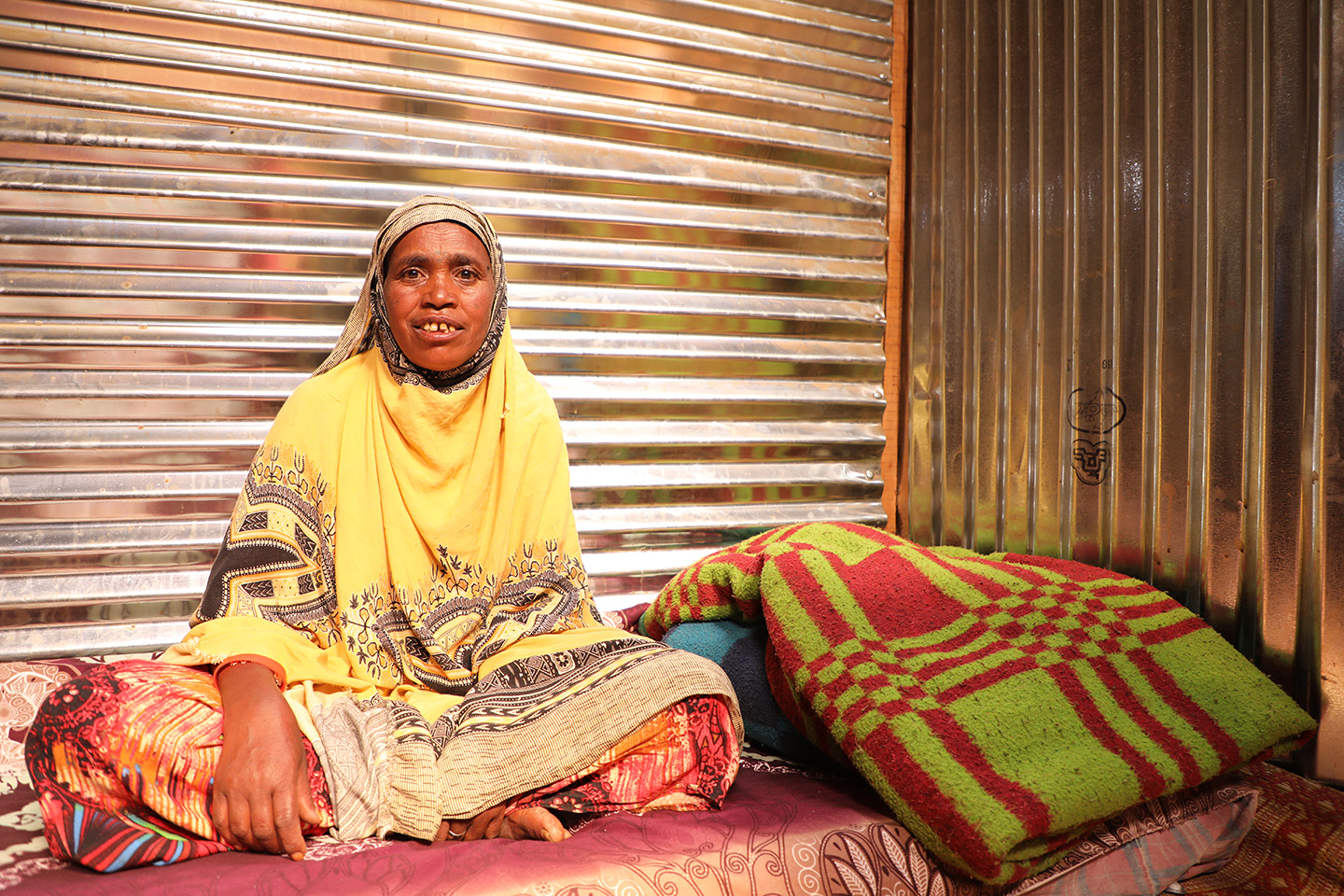 Hindya inside her room in a partition built from corrugated iron sheets at Chelenko Food Store site. Photo: IOM/Rahel Negussie 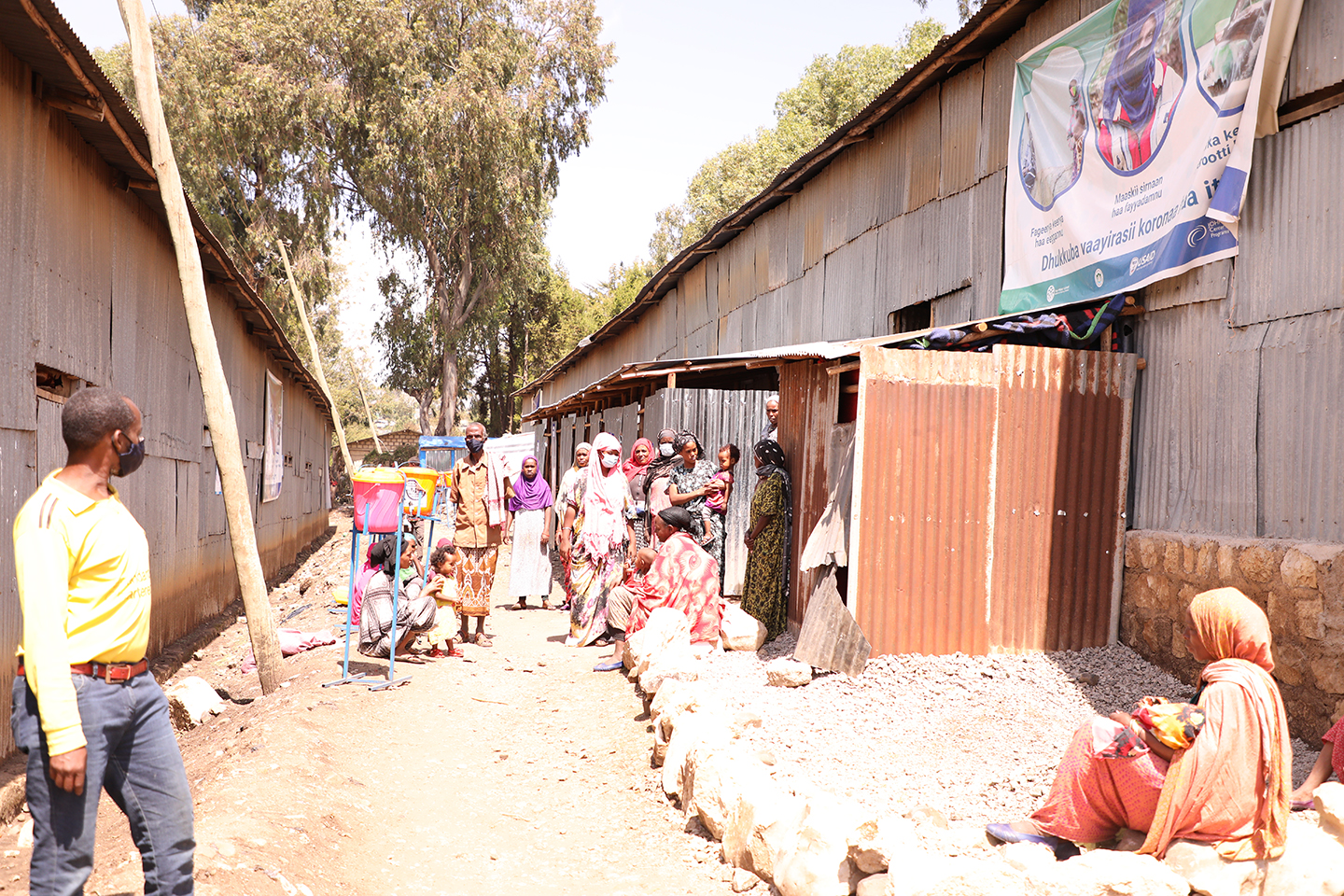 Some of the IDPs at Chelenko Food Store site. Photo: IOM/Rahel Negussie

According to Abdu Birratu, CCCM Project Clerk at IOM Ethiopia and coordinator of the Meta site, most women are not working, and female-headed households find it difficult to leave the site to earn extra income without anyone to look after their children.

Hindya is the deputy of the women's committee at the site.  “When women have issues and challenges, we address this by working with the local administration’s Women, Children and Youth Office. And when there is a conflict between individuals on the site, we discuss it amongst ourselves to solve the issue.”

Since the outbreak of the pandemic, IOM has been implementing COVID-19 prevention measures and raising awareness on hygiene issues. Additionally, mobile health and nutrition teams (MHNTs) visit the sites twice a week to conduct health assessments and to offer medical consultations. 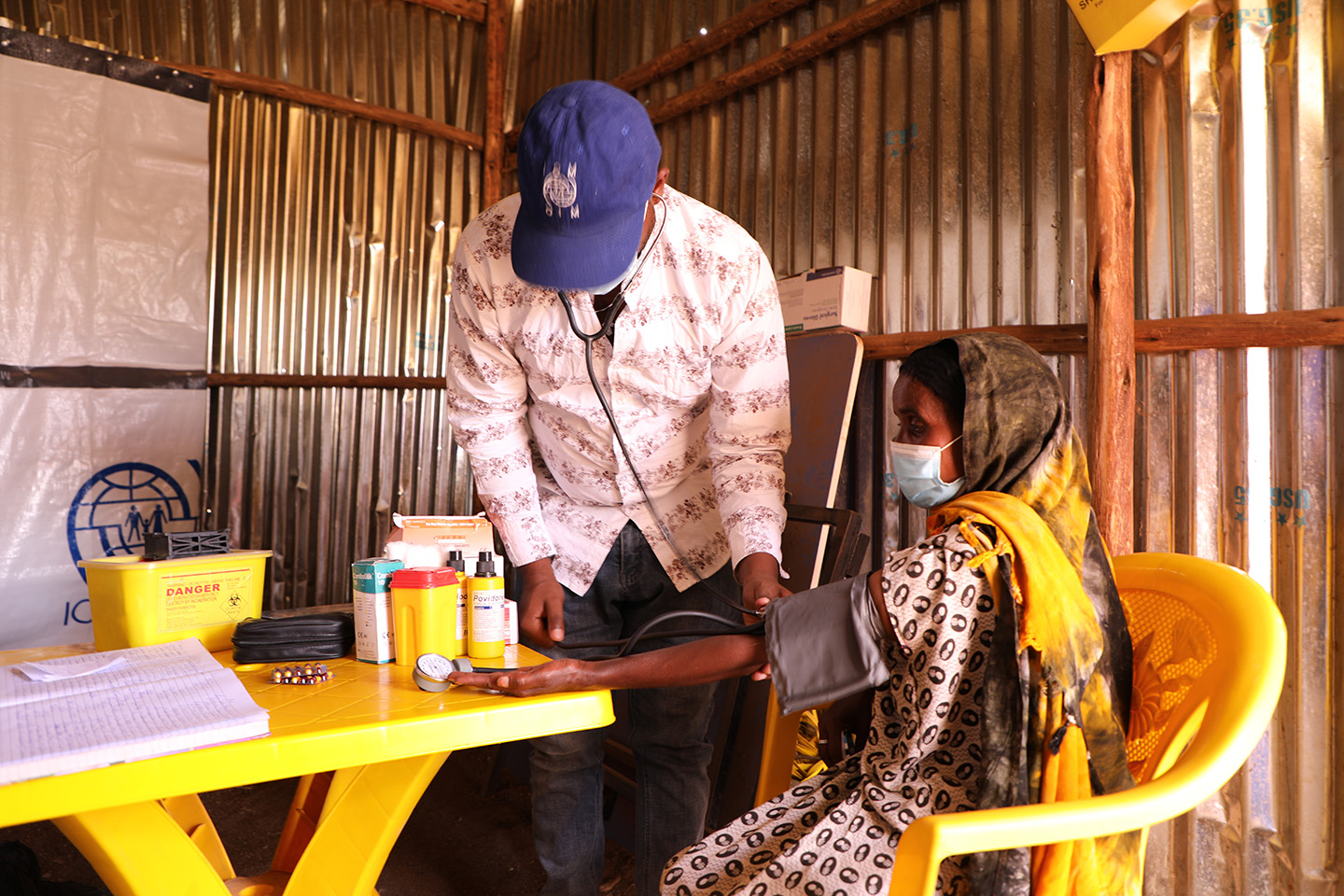 A member of the IOM Mobile Health and Nutrition Team (MHNT) conducting a health assessment of a woman living at the Kersa site for IDPs. Photo: IOM/Rahel Negussie 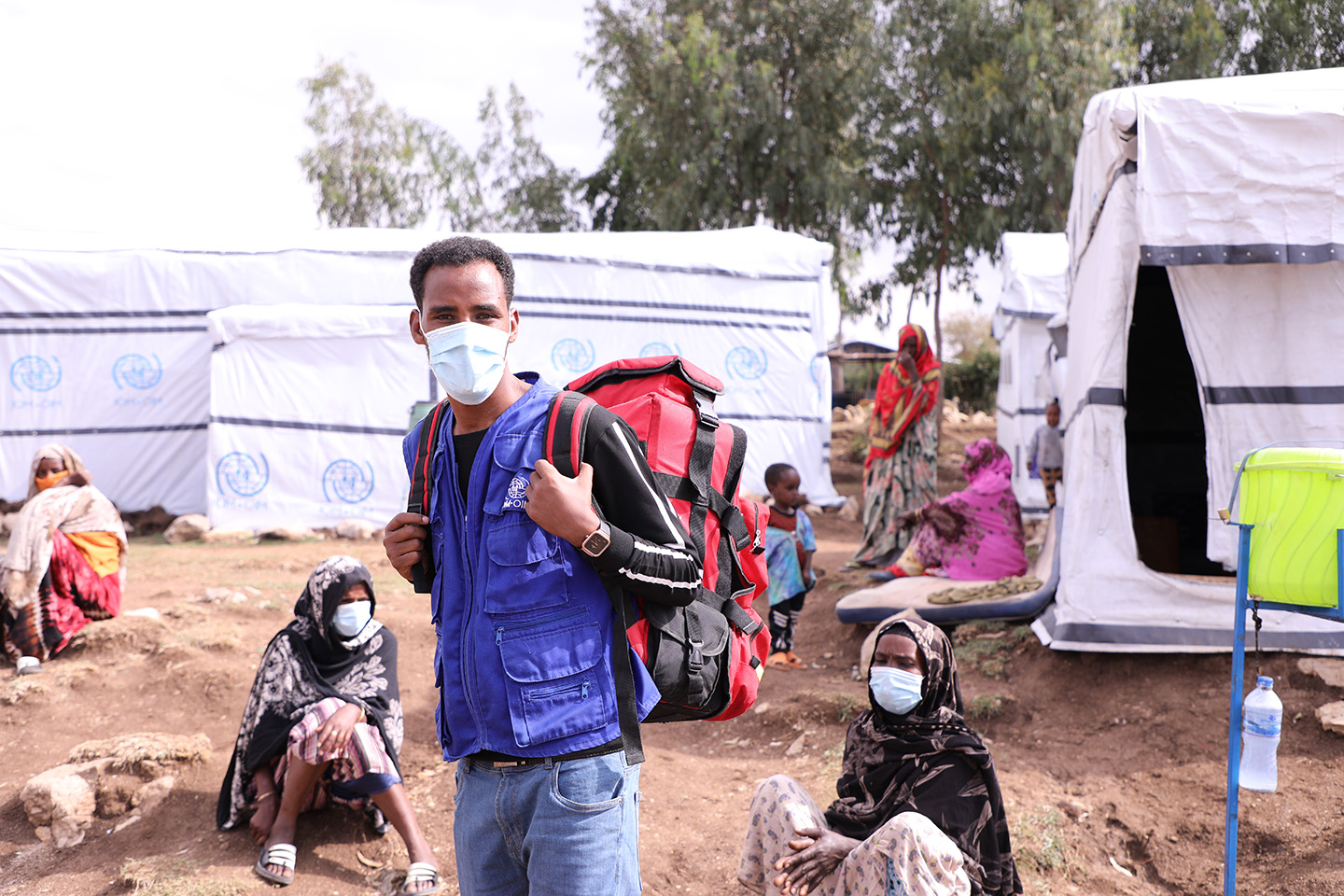 IOM nurse Feyiso Dalu is a member of the Mobile Health and Nutrition Team that visits the Kersa site twice a week to offer medical services to 257 households with over 1,200 individuals. Photo: IOM/Rahel Negussie

As displacement and family separation has led to considerable psychosocial strain, mental health and psychosocial support (MHPSS) mobile teams are also offering counselling and health talks. They give basic emotional support and informal psychoeducation to adults, in addition to recreational and socio-cultural activities targeting children and single women who head households.

A table tennis kit in a shed set up as a recreation and meeting area at Goro Gutu collective site. Photo: IOM/Rahel Negussie

IOM staff with committee members at Goro Gutu collective site.­ Such committees, made up of representatives of the site population, provide an important feedback mechanism. Photo: IOM/Rahel Negussie

“Displaced people in East and West Harerge have been living in sub-standard collective centres since 2017," says Stiofáinín Nic Íomhaird, IOM Ethiopia CCCM manager. "With other crises occurring around the country since that time, support and resources to these people, and the communities hosting them, have gradually reduced.

"IDPs in the Harerges need a durable solution, of their preference, to end their displacement and to allow them and their children to return to self-sufficient, dignified living conditions.”

As of June 2021, IOM’s CCCM initiatives are supporting Ethiopian authorities to manage 106 IDP sites and displacement-affected locations across Ethiopia. During 2020, shelter and non-food item (SNFI) distributions reached more than 364,000 crisis-affected individuals, or close to 73,000 households of five people, in seven regions and one city administration.

This assistance is provided directly by IOM as well as through partners, with the support of USAID's Bureau for Humanitarian Assistance (BHA), European Civil Protection and Humanitarian Aid Operations (ECHO), the Ethiopian Humanitarian Fund (EHF), the Government of Germany and the Korea International Cooperation Agency (KOICA).