Sana Fati was pushed away from his ancestral home in south Senegal by the adverse effects of climate change. He is now back and is looking to engage in agroecology as an adapting measure. Photo: IOM/Kennedy Okoth

The Earth Does Not Lie, It Listens to What We Say Through Actions!

Casamance, 26 Oct 2021 – With a garden hoe, Sana Fati digs the soil guided by a rope that cuts through part of his four acres.  A year ago, his land in coastal Senegal was idle but now he is preparing to transplant pepper seedlings.

Agriculture did not look like a viable option 12 months ago for Sana as changing weather patterns prevented sustainable harvests that would feed his wife, two children and his extended family. Unreliable rains left the land dry, forcing some youths in the Casamance community, including Sana, to migrate to other parts of the country, and beyond, in search of alternative livelihoods.

“We were receiving less rainwater, which was causing problems in the farms,” says Sana. “I had to migrate as the family depended on me. I moved to Libya where I worked as a plumber for four and a half years.”

After trying to make ends meet for himself and his family, he returned to Senegal with plans to find a solution in farming. The International Organization for Migration (IOM) was there to help and as part of his reintegration, IOM supported Sana to drill a borehole on his land to solve the water shortage that, coupled with many other factors, had forced him to leave.

‘’We had initially dug a borehole, but it would run dry in the middle of the dry season, leaving the crops to dry up. With this new borehole, we have a much larger capacity, and we can water the plants all through the season. I can now diversify crop production for internal use and even be able to sell the surplus,’’ says Sana.

His ancestral land now flourishes with a variety of crops and fruits that include maize, bananas, bell pepper, tomatoes, okra and zucchini. These are not only food for his family but also a source of income through surplus sales.

As the adverse effects of climate change persist, migrants like Sana know all too well their livelihoods are on the line and adaptation measures like agroecology that look at preserving the environment are not only beneficial to their crop production but also crucial for future generations.

The World Bank projects that more than 200 million people face a risk of being internally displaced by 2050 if urgent action is not taken.  To Sana, migration should not be seen as an only option to avoid climate change repercussions.

“I am glad that I came back and would not wish to go back. I was recently called back for a plumbing job but I would rather engage in farming,’’ he says. “The earth does not lie; through our actions, we tell it what to do. I chose to come back voluntarily to engage in agriculture and don’t regret it.” 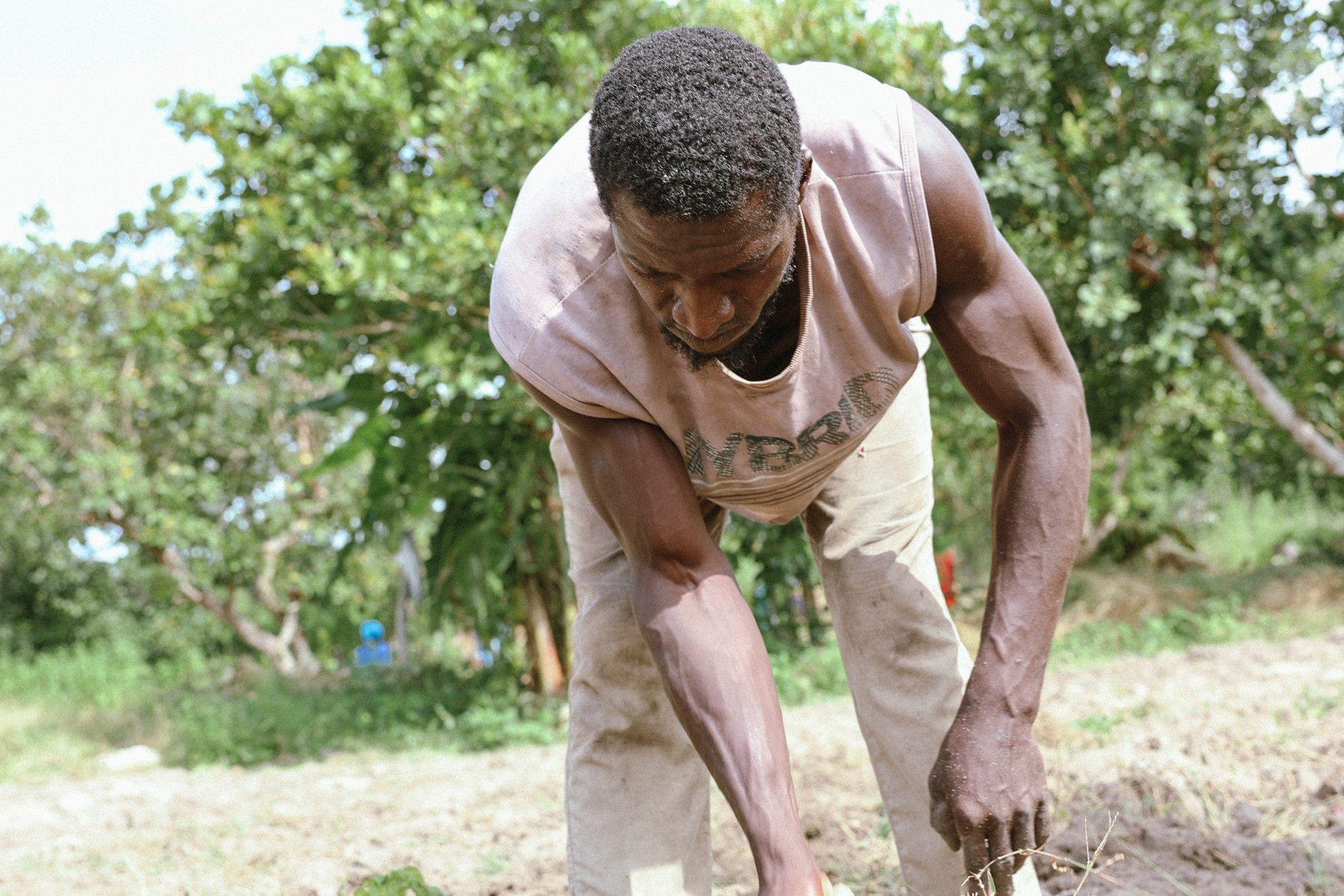 Sana Fati on his 4-acre piece of land where he practices agroecology. Since he was supported to drill a borehole on his farm, he no longer experiences water shortages. Photo: IOM/Kennedy Okoth

In addition to the borehole, he aims to gain additional skills to maximize his agricultural production while conserving the environment for sustainable cropping.

IOM, together with technical partners, is providing skills training and equipment for agroecology as part of the reintegration support provided to the returning migrants and of efforts to promote sustainable agricultural techniques for climate change adaptation and mitigation.

A comprehensive six-month training in agroecology covers both theoretical and practical components covering all aspects of the value chain, from the production of a large variety of endogenous harvests, including forest related production, to transformation and marketing.

As a result, returning migrants like Sana will be able to adopt practical agroecological practices, such as crop rotation, organic manure, and other peripheric environmentally sustainable practices like the use of alternative energies, sustainable and fair use of underground water reserves, and providing degradable alternatives to plastic to prevent plastic pollution.

“This is just a start for me, my goal is to be able to teach and provide job opportunities to others, but first I have to learn,” Sana says.

The programme will provide community members an alternative to  internal migration or the dangerous irregular migration routes, and to find better living conditions while they help rebuild not only community social links, but also links between small-scale and large-scale farmers and producers, by providing networking opportunities that can lead to long-term employment opportunities. The activities also support long-term climate change adaptation and mitigation efforts via migration management programmig.

These efforts are part of the IOM-led project on "Implementing Global Policies on Environmental Migration and Disaster Displacement in West Africa" funded by the Government of France.

Help IOM continue to provide assistance to migrants, refugees and host communities for a sustainable future, and increase their resilience to future disasters.