“When the desert locusts suddenly invaded, we were horrified,” explains Galmo Kiyo Waariyo, a farmer living in a village called Lafto in Ethiopia. “The rustling swarms were so enormous that the sky gradually darkened, and they were soon crawling everywhere.”

The previous farming season looked promising until desert locusts that have ravaged the greater part of East Africa since late 2019 descended on Lafto village. The locust infestation arrived almost unexpectedly in February 2020, attacking and extensively damaging large swathes of crop and pasture.

Galmo, a 58-year-old mother of eight, lives in the Dubuluk woreda of Borena zone, in Ethiopia’s Oromia region. Three of her grandchildren are aged under five; another member of the family is chronically ill. She is the family’s main breadwinner.

For generations, families in Galmo’s village have lived as agro-pastoralists, often depending on seasonal rainfall. Like many others, her community practices mixed farming, growing maize on small family plots and keeping livestock such as cattle, sheep, goats, and chicken.

But not when the locusts descend. 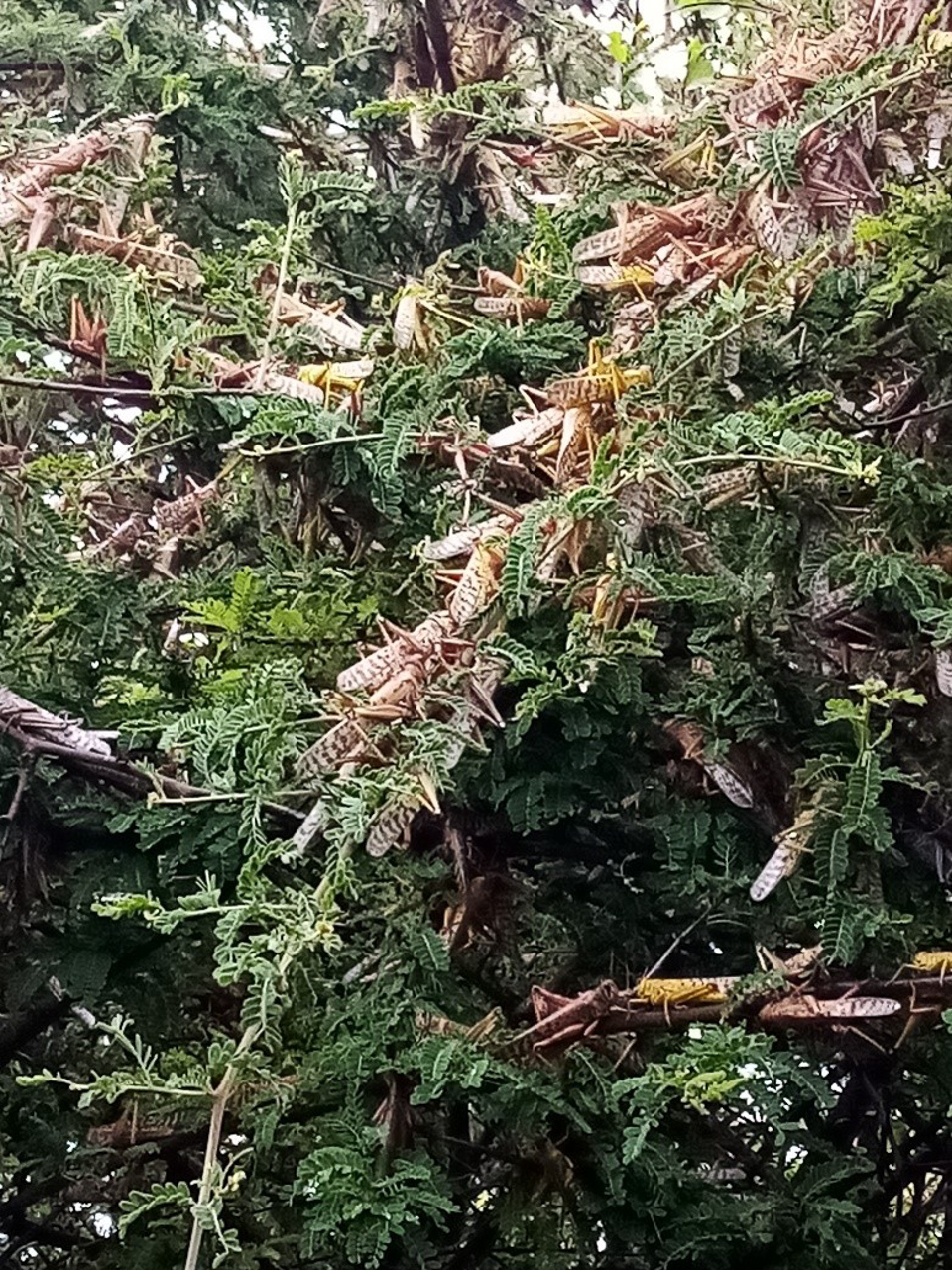 A swarm of foraging desert locusts perched on a tree. Photo: IOM Ethiopia

“We tried many techniques to keep the locusts away from our crops and plants,” Galmo continues. “We made clamoring noises by shouting at the top of our voices and by banging our utensils. We started fires to create thick smoke around the planted areas.”

All of this in a desperate and vain attempt to drive away the locusts. “They voraciously devoured all our crops, leaving almost nothing in the fields,” she concludes. “I lost everything and only bare, parched soil remained of what was once a thriving and promising crop. Out of the blue we were facing a failed season with no food to sustain us or pastureland for our livestock.” 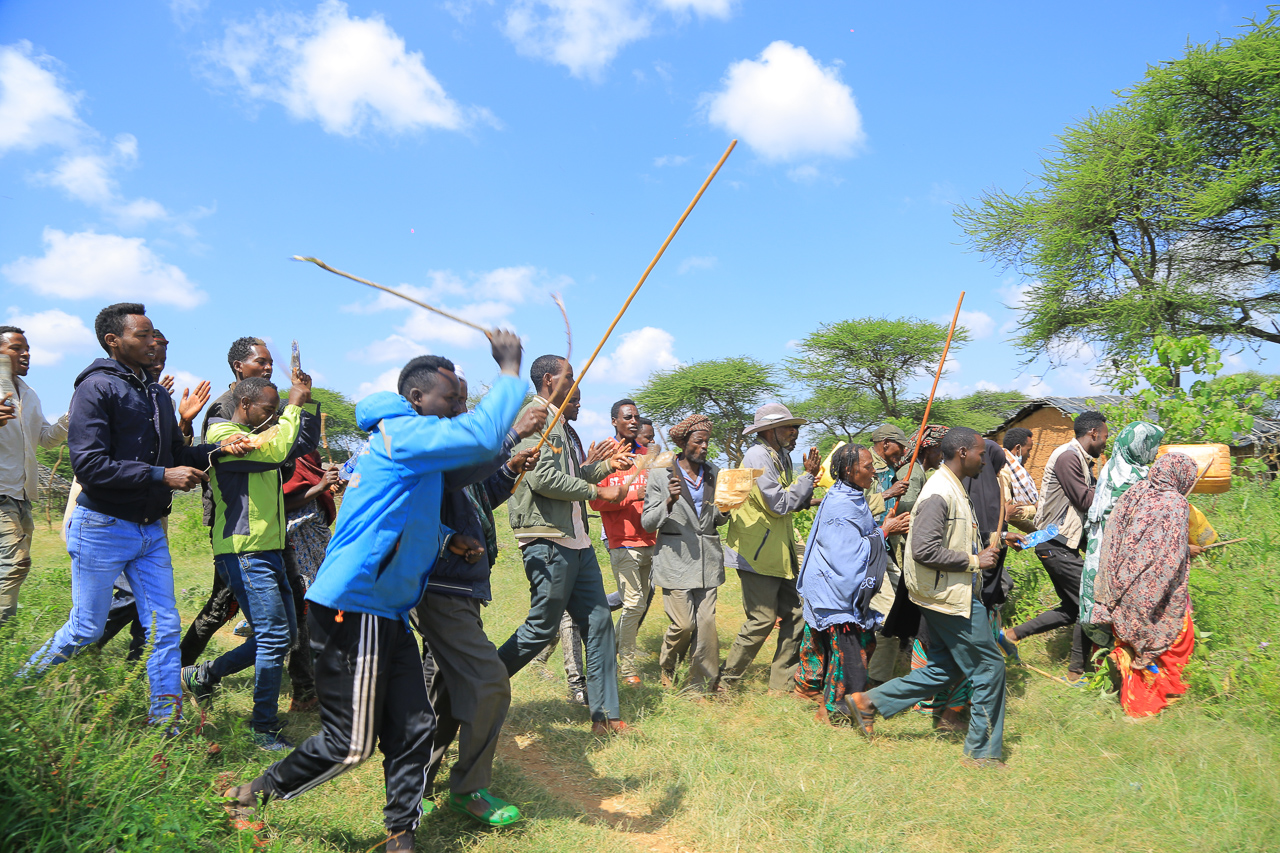 Galmo says her crops were damaged in just a matter of days and even the surrounding grass and plants were gone.

In February 2020, government authorities began control operations in the zone but, despite their swift intervention, the sheer scale of crop destruction left communities such as those living in Lafto facing mass starvation.

According to the Food and Agricultural Organization (FAO), desert locusts are the most destructive migratory pests in the world. They feed on nearly all plants in cropped areas, rangelands and forests. They fly rapidly across great distances. A single small swarm covering one square kilometer can eat in a single day the same amount of food as 35,000 people.

For Ethiopia, the invasion was the worst in 25 years. In 2020, some 20.2 million people were facing acute food insecurity in the wider Horn of Africa region, according to FAO.

A previous drought and the coronavirus pandemic had already diminished incomes and farmers were resorting to selling their livestock to raise money to buy food, and even cutting back on meals. As food stocks deteriorated, most of the affected communities were surviving on whatever provisions could be bought at a market, exhausting their limited savings.

Now, the International Organization for Migration (IOM), with the support of a EUR 2 million funding from the European Commission's Humanitarian Aid and Civil Protection department (ECHO), is reaching out to selected households in affected areas such as Dubuluk with multi-purpose cash grants.

“The European Union has supported efforts to combat the desert locust infestation, not only in Ethiopia but in the greater Horn of Africa as well. The locusts have, in many places, worsened already dire food shortages. In Ethiopia specifically, working together with our humanitarian partners, including IOM, the EU contributed a total of  EUR 9.5 million in 2020 to address food shortages and provide livelihood support to pastoralists and farmers affected by the desert locust outbreak,” says Yassine Gaba, the Head of the European Union’s Humanitarian Aid office in Ethiopia. 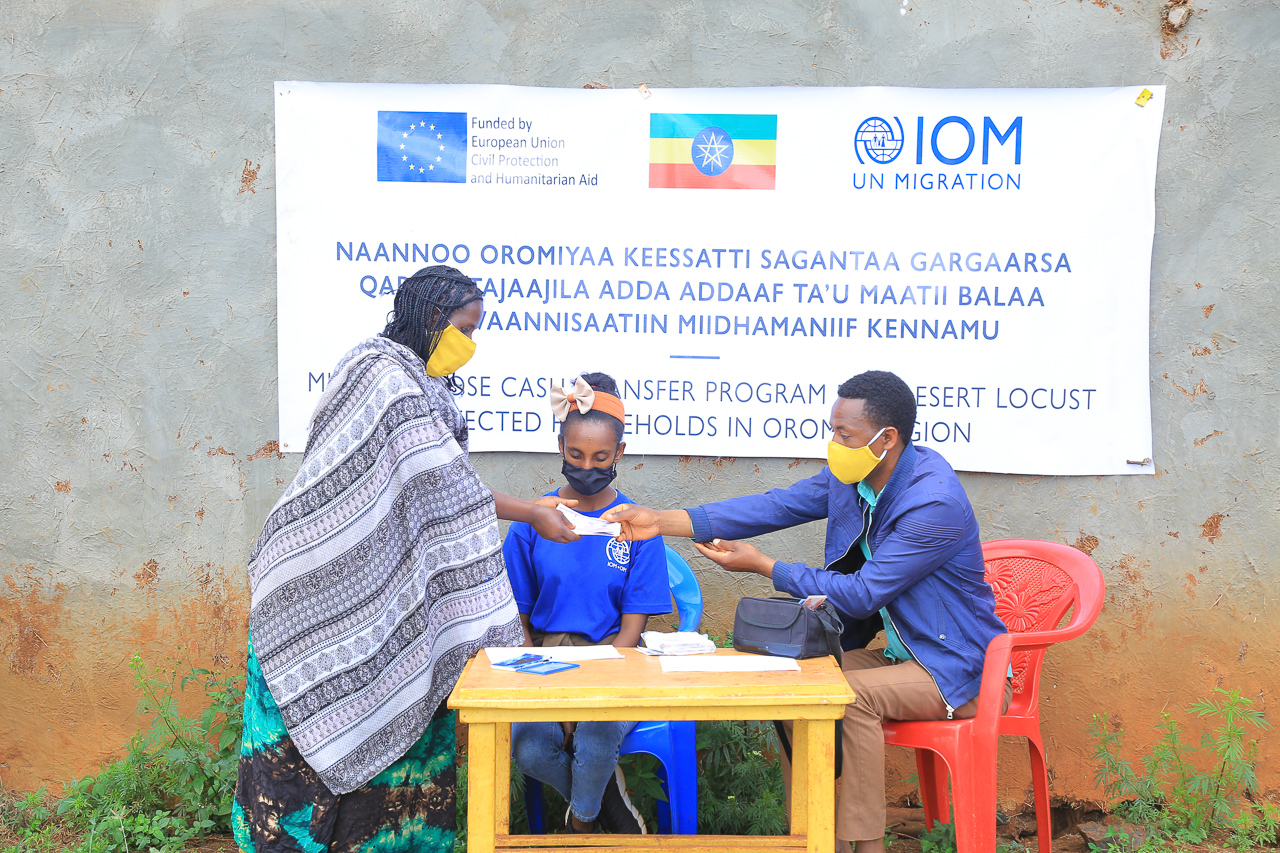 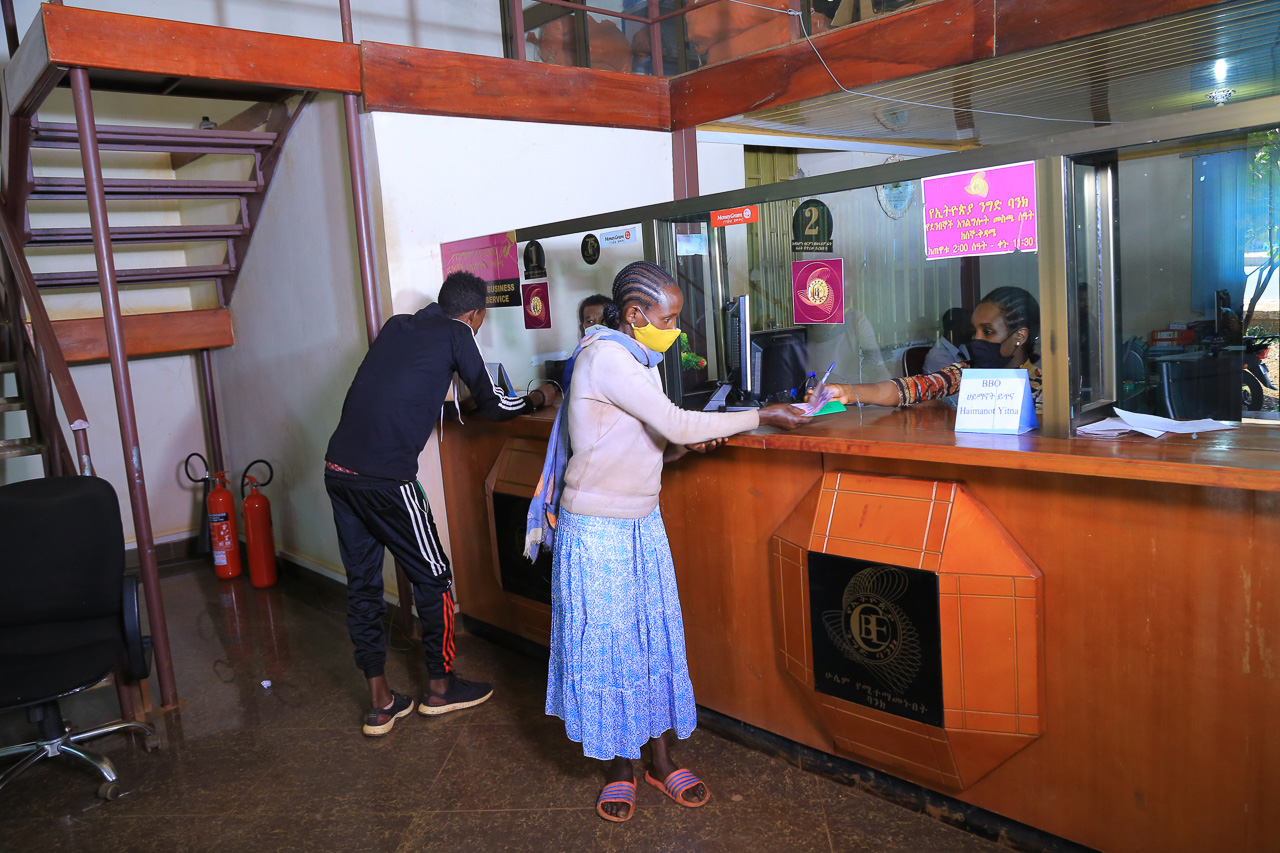 In October 2020, IOM, working with the government and the country’s Cash Working Group, started extending cash grants to the most affected households. The primary intention of this stop gap measure has been to address the immediate food needs of the affected, based on the value of the food basket set by the government, whilst also supporting water, sanitation and hygiene, education and shelter needs.

The cash transfers, amounting to ETB 1,500 (approximately USD 40) each month per household, over four months, have been disbursed through financial service providers. The transfer value is based on a minimum expenditure basket set by the Cash Working group and the government’s National Disaster Risk Management Commission (NDRMC) after a rapid assessment conducted to monitor the price of consumer goods.

Between October and November 2020, Galmo and other households in her village received cash support amounting to ETB 6,000 (USD 150), enabling them to survive the adverse effects of the desert locust infestation. Through this support, Galmo was able to meet basic food needs and to purchase crop seeds and fodder, while avoiding selling her assets to get money to buy these goods. 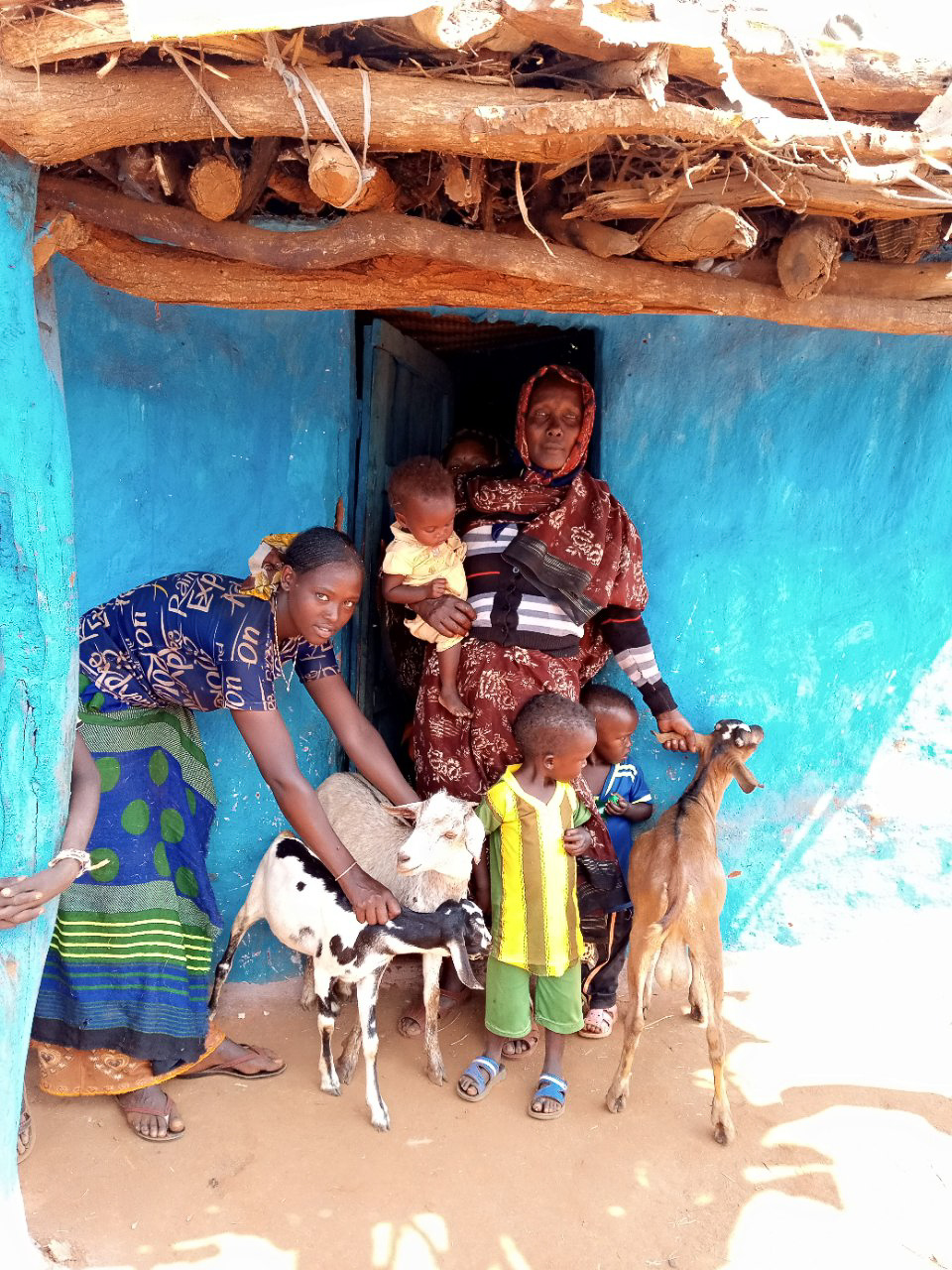 Galmo with her family and some of the goats she bought to restock her herd. Photo:  IOM Ethiopia

“I am so happy with the cash assistance as it has helped me not only ensure food supply for my family, but to also restock the goats I had sold. I have spent some of the cash I received to buy improved seeds and replanted again hoping for a good harvest this time,” says Galmo. 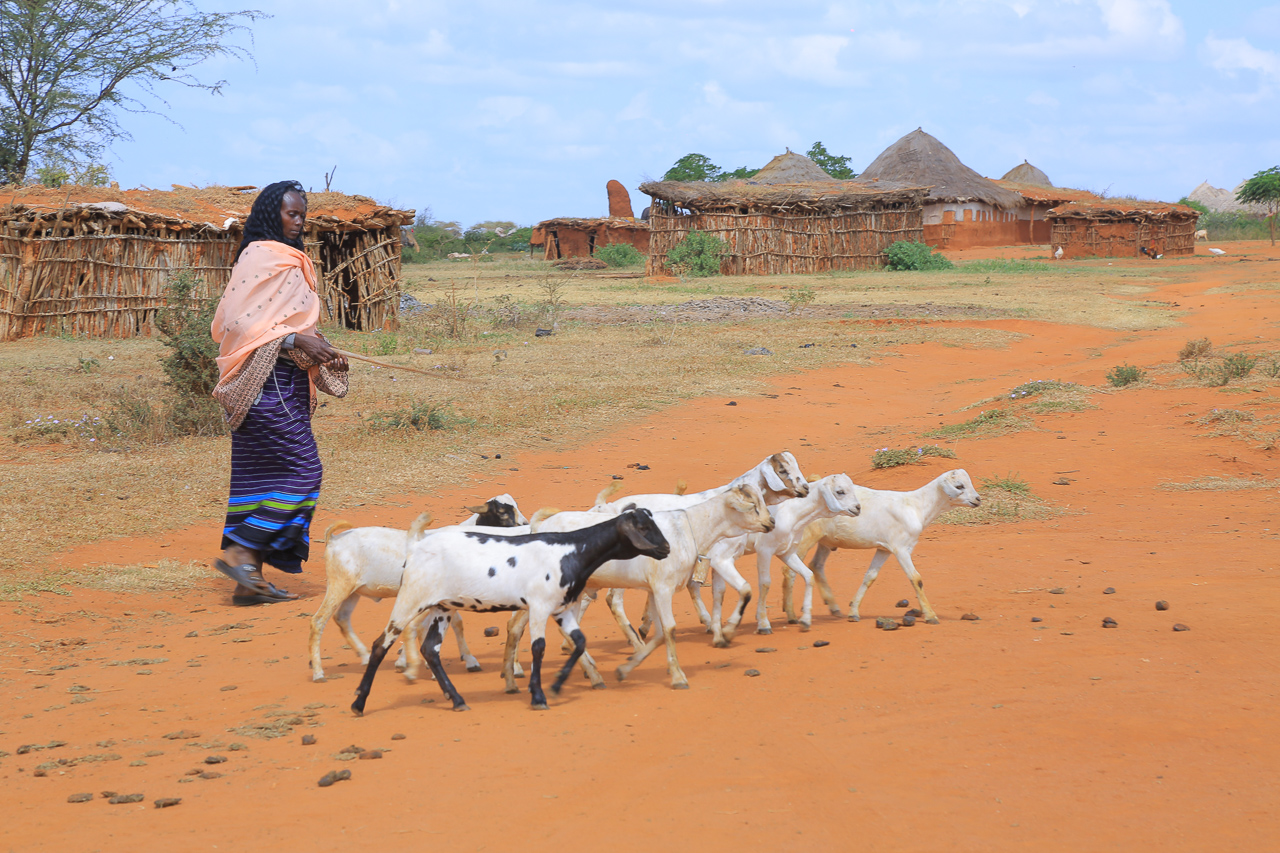 IOM assessed the state of the consumer market and the supply of foodstuff and agricultural inputs in places such as West Hararghe, Borena, West Guji, Jerer and Nogob zones before launching the project. 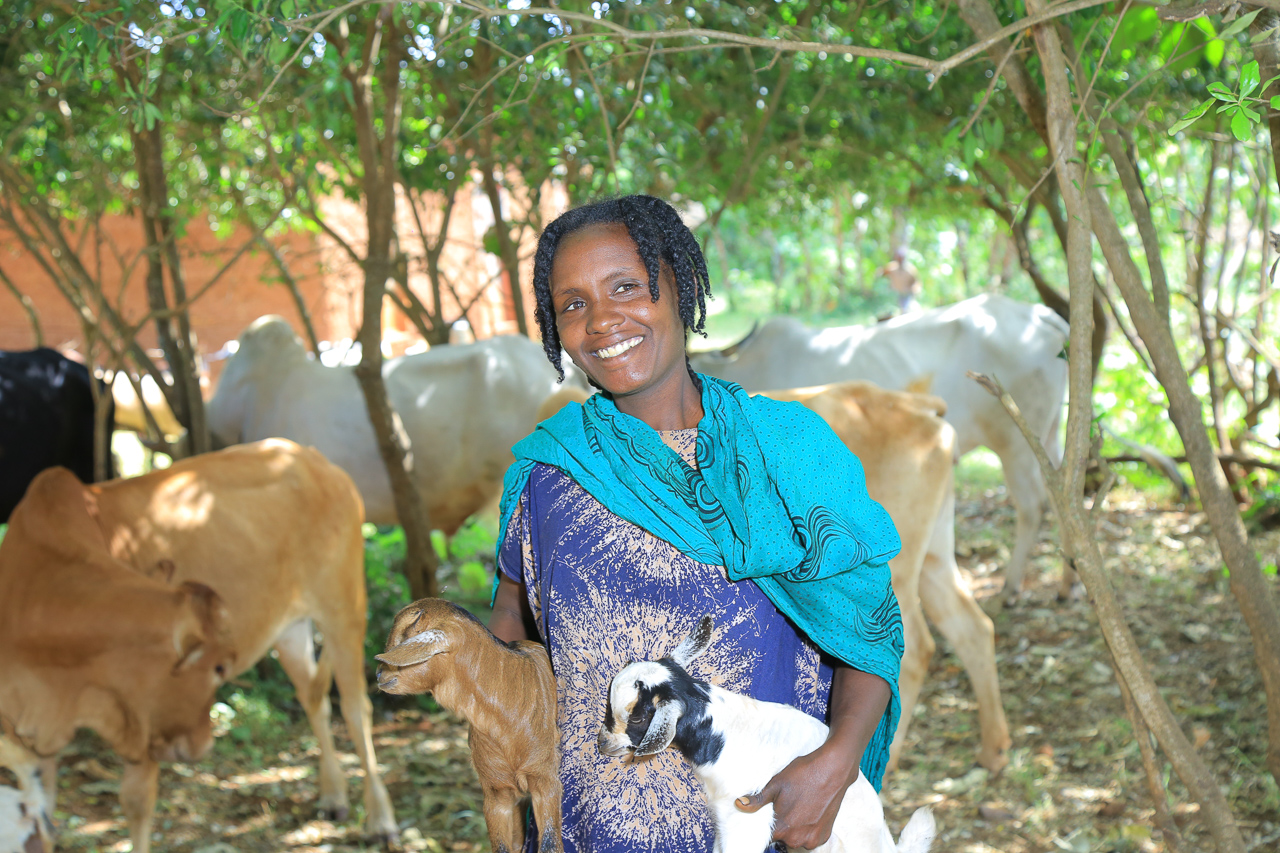 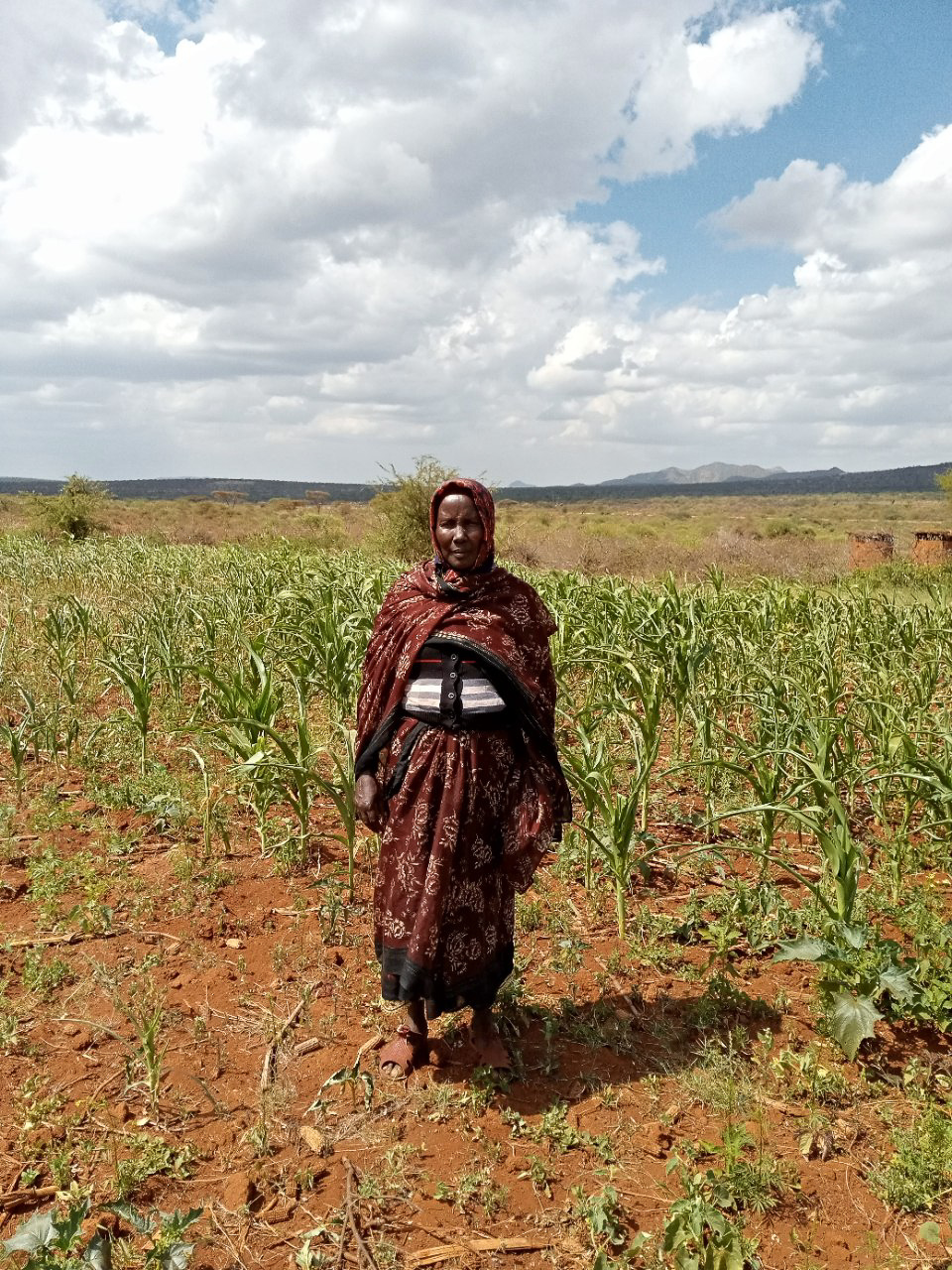 Galmo on her maize field that she replanted at the end of October 2020. Photo:  IOM Ethiopia

In addition, IOM looked at risks related to protection, gender, and access to market and distribution points, as well as how various stakeholders from the district level, down to the ward and community level, accepted the use of cash transfers. Government and community leaders eventually played an important role in identifying deserving beneficiaries. 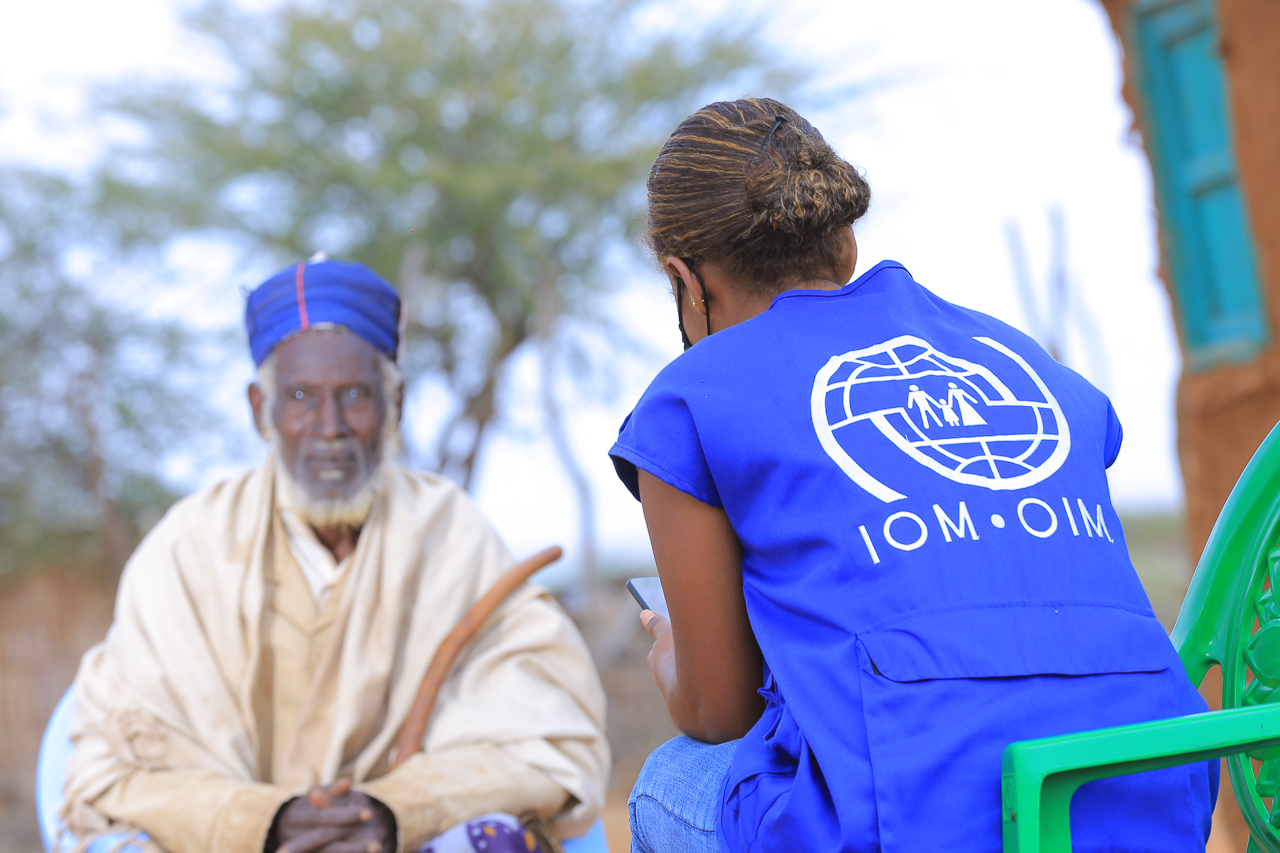 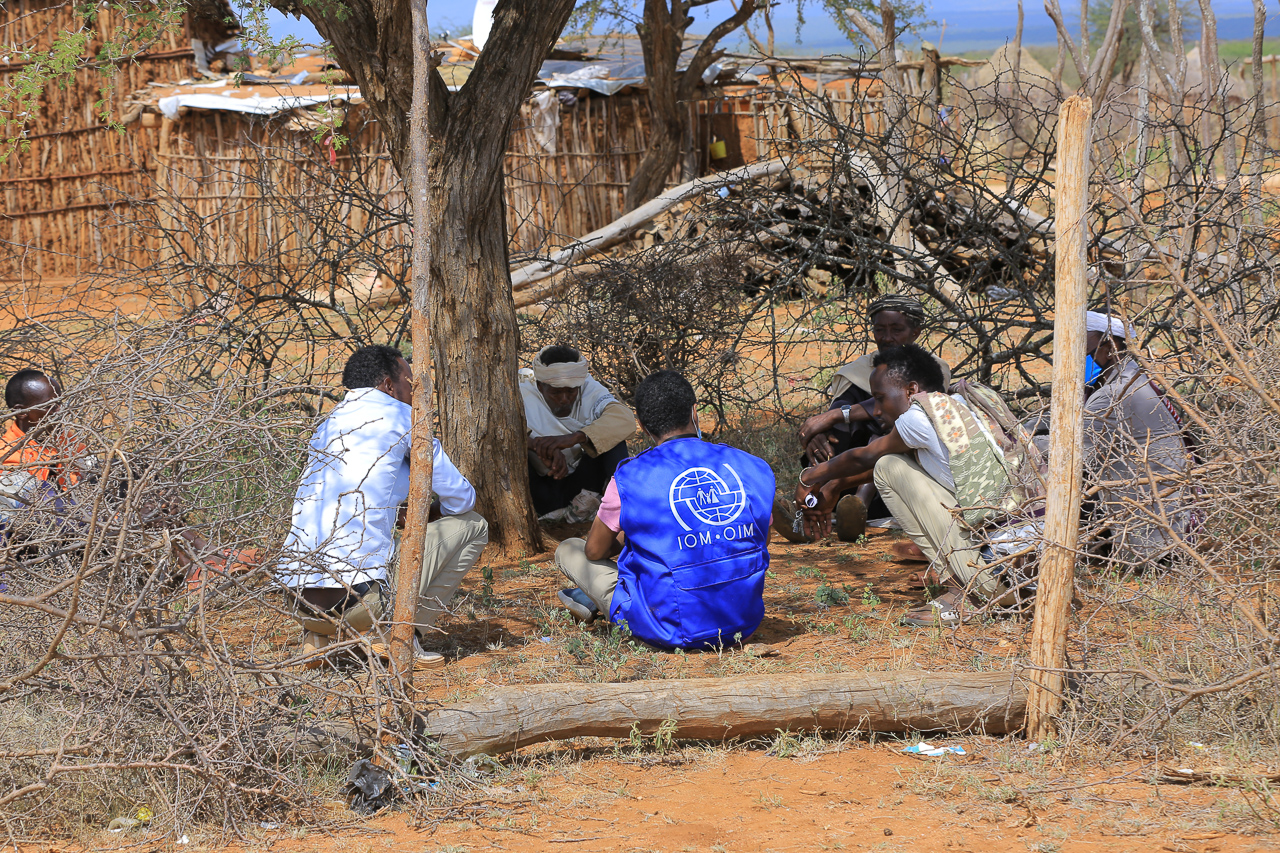 Since this important intervention was launched in July 2020, some 8,500 households, or approximately 45,000 individuals, whose source of livelihood was affected have benefited.