Hope and Resilience for Displaced Women in Lake Chad 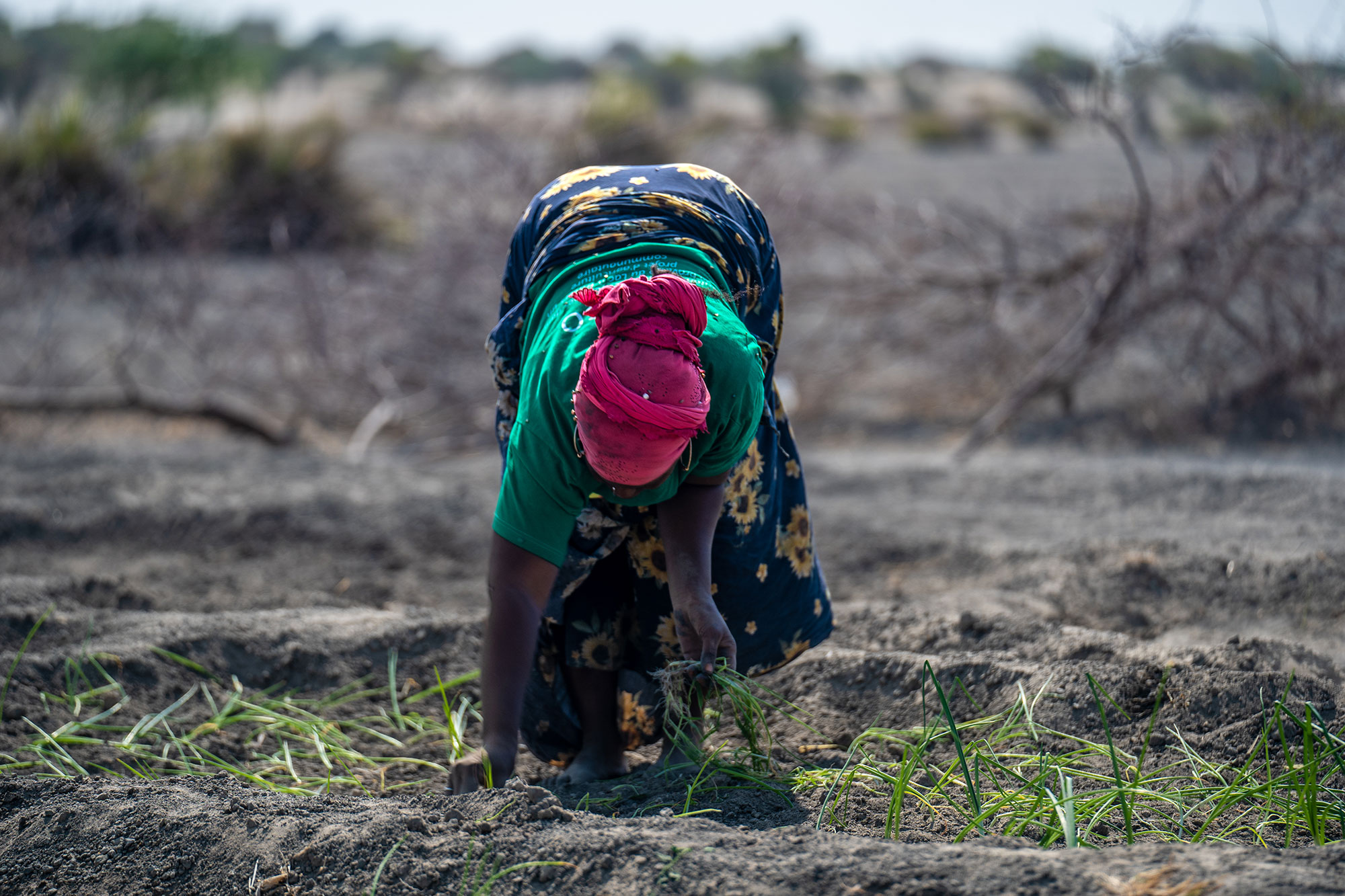 A woman plants onions in one of the fields. Through the project, displaced women can earn an income which they can use to expand their market garden and send their children to school. Photo: IOM

“We fled immediately and left everything behind us,” she recalls. “We put our children on donkeys, and the adults walked in front.”

After two long days of walking through the arid lands around Lake Chad, Mariam and other displaced families settled in Dar al-Amni, a large displacement site located outside of Baga Sola, in Chad’s Lac province, hosting more than 6,000 internally displaced persons (IDPs) following Boko Haram’s attacks. On the site, the International Organization for Migration (IOM) and other humanitarian agencies provided shelter, food and non-food assistance for Mariam and her family.

Around Lake Chad, IDPs are particularly exposed to the intensifying effects of environmental degradation and climate change caused by varying rainfall patterns and extreme temperatures.

“The limited access to resources such as land and water pushes displaced persons to travel long distances, sometimes back to their communities of origin, to fish, farm or search for alternative livelihoods, thereby exposing themselves to various pains and risks of violence,” explains Mouftah Mohammad, a project manager with IOM Chad.

“Displaced women are particularly vulnerable as the precarious conditions they are forced to work in such as limited water supplies and the use of manual wells expose them to risks of physical pain, abuse and gender-based violence.”

Through trainings on climate-resilient farming techniques and agroecology, the women can become independent through the proceeds from farming. Photo: IOM

Since 2021, IOM has been piloting the “Ngasso” project at the Dar al-Amni site  to usher in more durable solutions to displacement in Lake Chad and build the resilience of displaced populations, especially women like Mariam. The name means “together” in  Kanembu, a language spoken by Chadians around the Lake.

In collaboration with local community members and authorities, the project seeks to strengthen their livelihoods while reducing their risk of exposure to gender-based violence through the allocation of a one-hectare plot of land near the Dar al-Amni site where the women's group of Mariam lives.

In addition to providing them access to land, IOM installed a solar-powered irrigation system on the plot and provided the women with farming tools and seeds to enable them to farm their own produce closer to home.

Through the project, IOM also partnered with the National Rural Development Support Agency (ANADER) which trained the women in climate-resilient agricultural techniques. 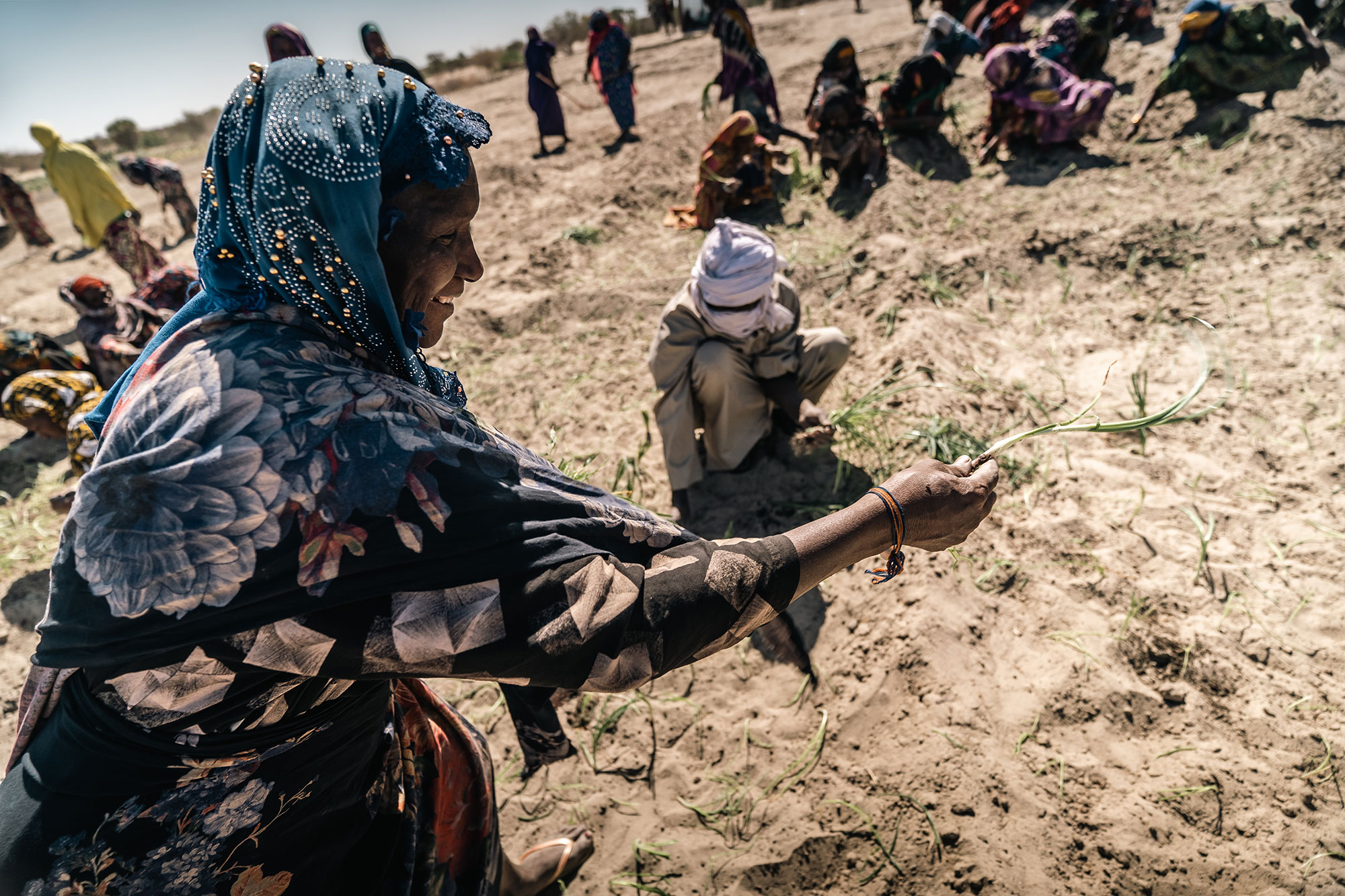 Women farm vegetables near the Dar al-Amni IDP site, thanks to a solar-powered water tower set up by IOM to reduce the risks associated with travelling long distances to access water. Photo: IOM

“Back in our village, the land was fertile, but we did not know how to make the most of it,” says Mariam. “Here, however, we have learned market gardening, nursery techniques for seedlings and seasonal farming, and our yield is better. We have already harvested two bags of millet and two-and-a-half bags of okra in record time.”

With their increased yield, the women are now earning enough to establish a savings fund, which helps send their children to school and pay medical bills on time.

Across Chad’s Lac province, the majority of IDPs do not wish to return to their area of origin as they feel more secure in their current location. As the displacement situation enters its seventh year, durable solutions are needed to ensure the needs of IDPs are met, particularly those of women who make up 55 per cent of the displaced population.

“The Ngasso project shows that a holistic and integrated approach to local integration is possible for internally displaced persons,” says IOM’s Mouftah Mohammad. “Indeed, durable solutions not only reinforce women’s livelihoods, but also contribute to their long-term resilience to climate shocks as they learn lifelong, climate-resilient farming skills.”

The “Ngasso” project is supported by the Australian Government Department of Foreign Affairs and Trade (DFAT).