Women forage for mud fish in the nearly dry Otur Swamp in Katakwi district. They usually sell their catch at a nearby market and take some home. Photo: IOM/Abubaker Mayemba

The Impacts of Climate Change in Uganda

If Joseph Natsitya Tshikanga had been home on 1 March 2010, he would most likely have perished alongside his four siblings in a landslide.

On that fateful day, Natsitya’s three brothers and sister did not make it out alive from beneath the debris when the ground loosened under Nametsi village, located near Mount Elgon in Bududa district, eastern Uganda.

“On the second of March, I had to come back from school because I was told my brothers had gone, that my sister had also gone, and I got worried thinking that maybe my father had gone too,” Natsitya recalls.

The landslides buried houses, markets, and a church in three villages, killing an estimated 400 people and displacing 5,000. 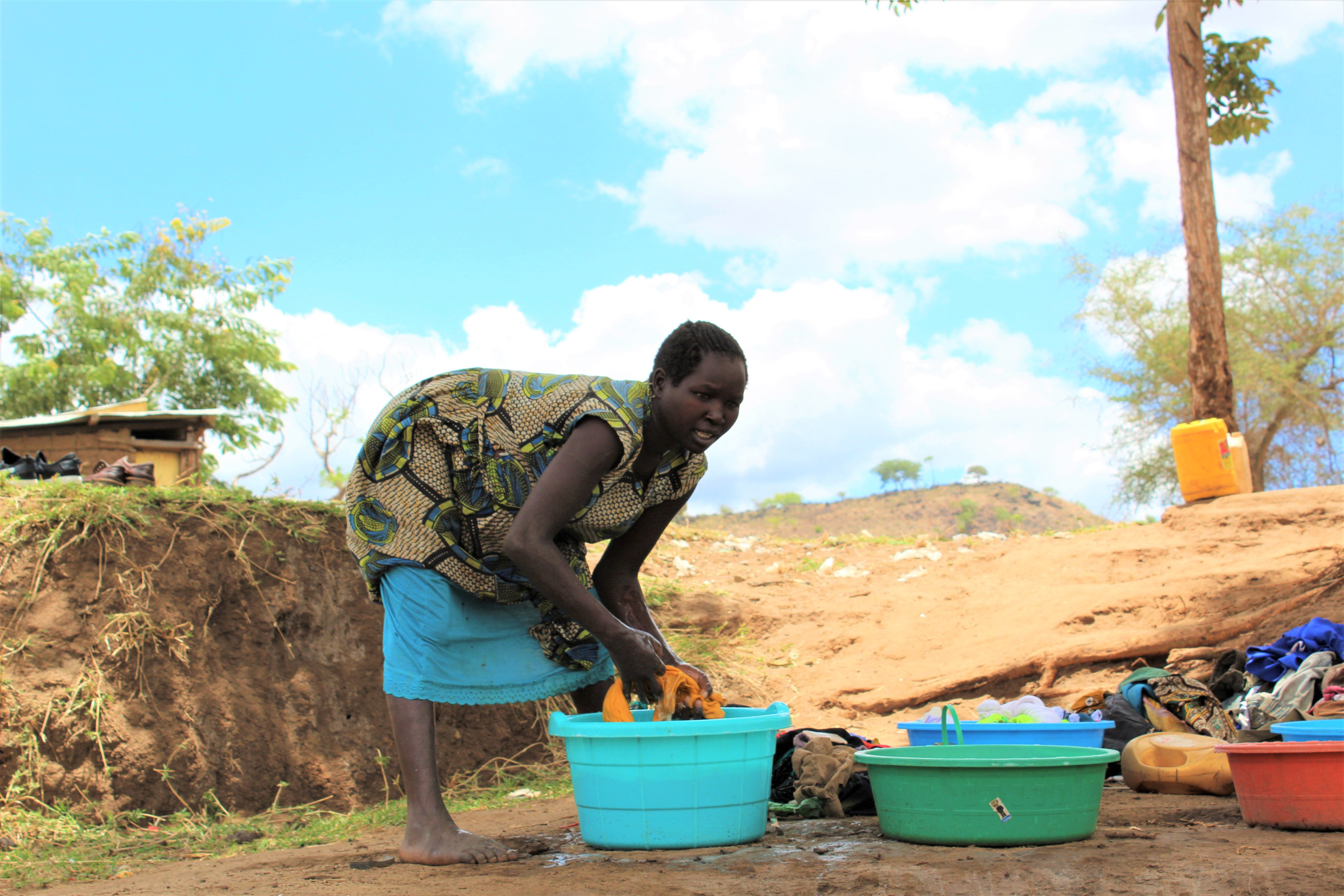 Natsitya, then 13 years old, along with his remaining three siblings and their mother, later sought refuge at Tunwasi Primary School. They subsequently moved to Bulucheke, a camp for Internally Displaced Persons (IDPs), after which they were resettled by the government some 374 kilometers away from their home in Kiryandongo district.

Uganda has mostly a tropical climate characterized by stable rainfall patterns. However,  the effects of climate change have turned the seasons around with the country experiencing shorter or longer rains and harsher droughts – especially in the eastern and north-eastern Uganda.

For Natsitya and his family, their displacement brought only hardship. His mother became the family’s sole breadwinner who now had to labour with farm work to provide basic needs including school fees for her children.

It was a daily toil bereft of any luxuries, prompting Natsitya, in 2014, to head back to landslide-prone Nametsi. He joined his father who had declined to leave his “wealth” behind, a reference to his ancestral agricultural land.

“In Kiryandongo we used to fetch drinking water from the cattle dam; we ended up falling sick. Finding food and school fees was hard so I decided to come back to Nametsi,” Natsitya says. He is undaunted by the regularity of the landslides. “I can never go back to Kiryandongo.” 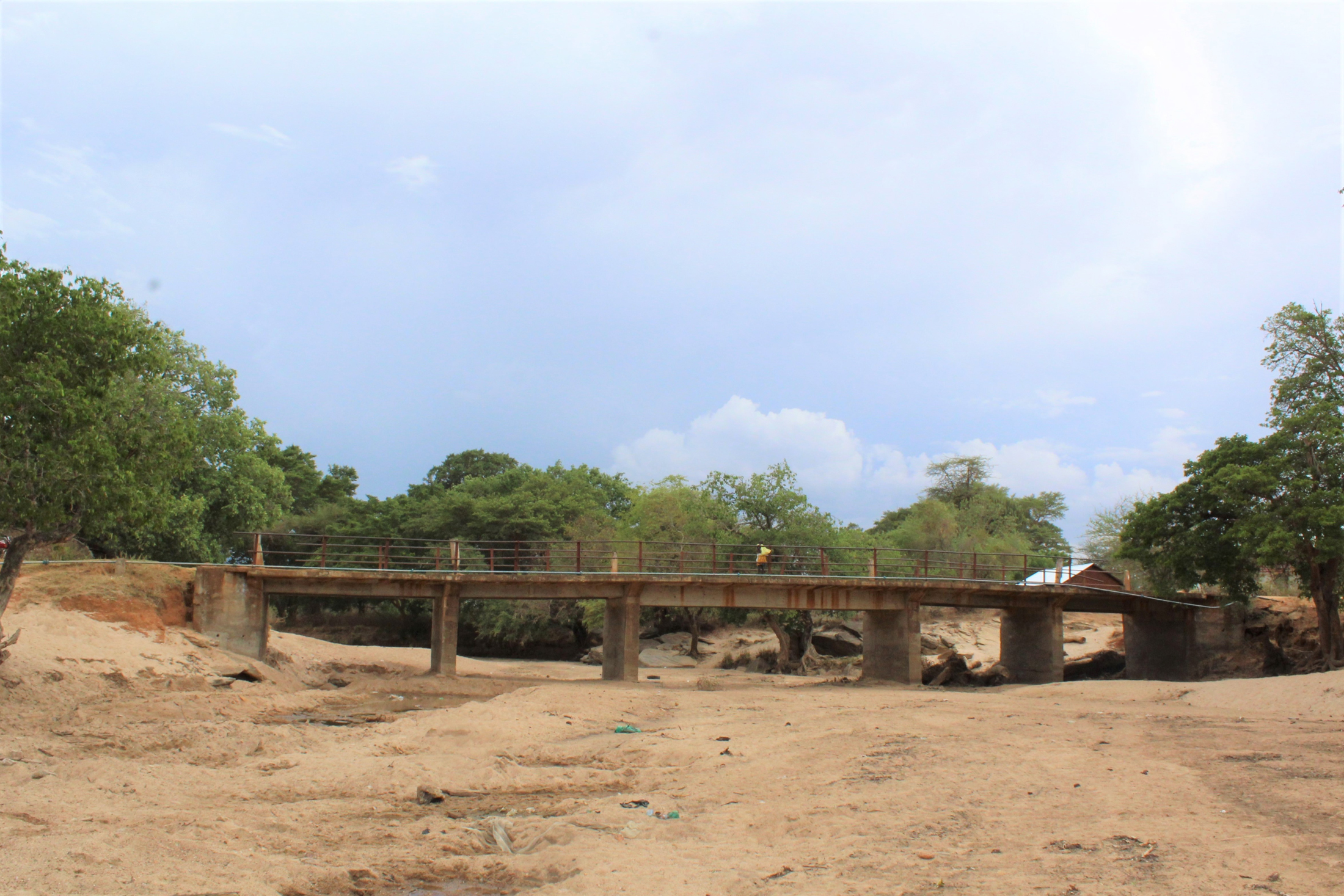 A dried-up water stream in Amudat district. Because of the drought, many water sources in the district have run dry. Photo: IOM/Abubaker Mayemba

Natsitya's situation is part of a growing trend in Uganda and beyond. The International Organization for Migration (IOM) is undertaking qualitative and quantitative studies in Bududa districts. Implemented jointly with Makerere University’s Centre of Climate Change Research and Innovations (MUCCRI), the project dubbed ‘Data for Development – Understanding Environmental and Climate Change Migration in Uganda’ is purposed to analyse the link between migration and climate change and will incorporate analyses on migration routes, trends, the scale of environmental migration, and how migration can potentially be an adaptation strategy to mitigate the impact of environmental degradation and climate change.

Yet the signs of climate change are apparent in other parts of Uganda too, providing extreme weather patterns that are drying out what used to be wet areas, and making the dry areas even drier.

“The importance of reliable evidence to effectively tackle society’s challenges cannot be overstated,” says IOM Uganda Chief of Mission Sanusi Tejan Savage. “We are confident that this project will provide empirical data which will inform strategic action plans and programmes to prevent and mitigate displacement caused by climate change and environmental disasters.” 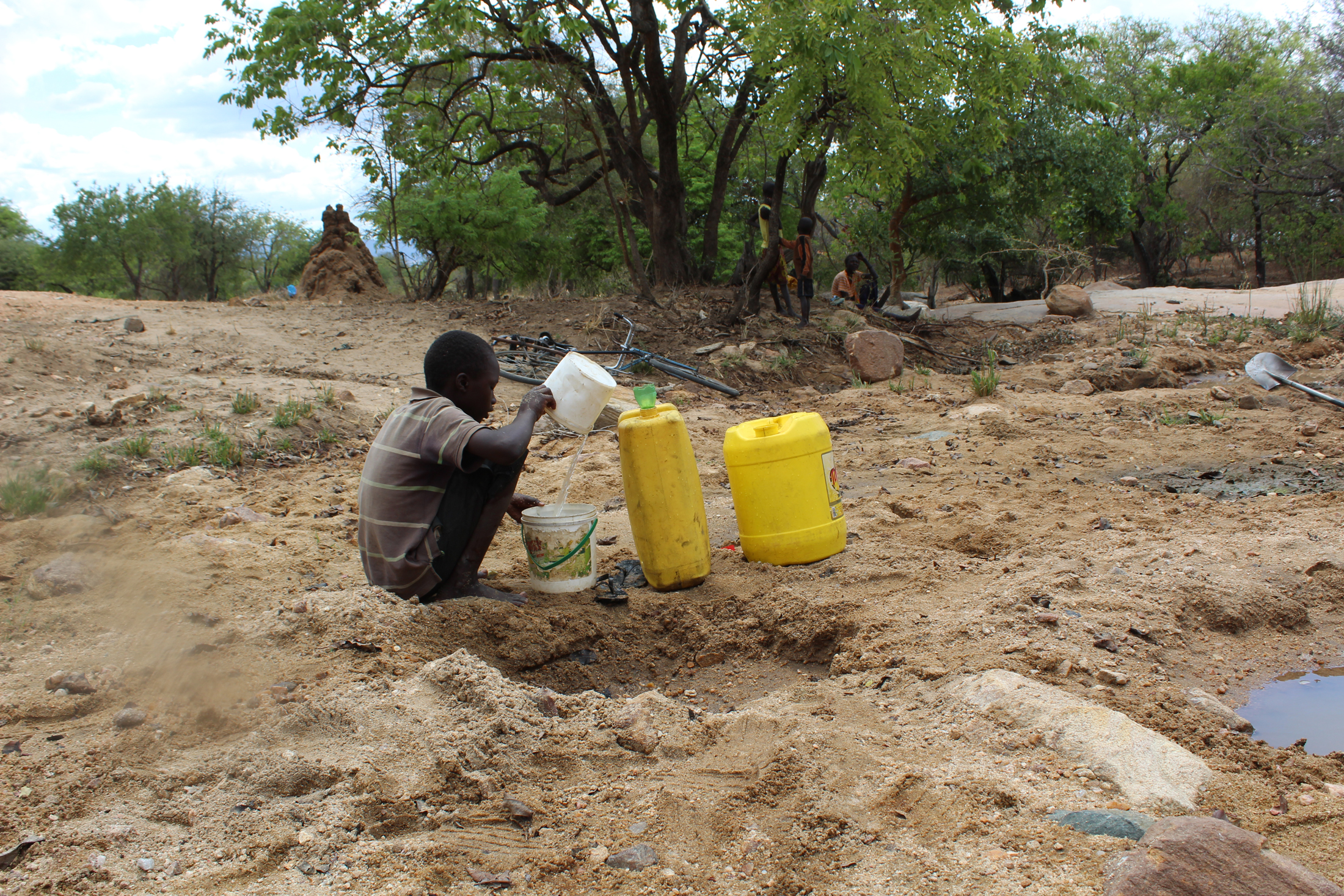 Across the plains of Katakwi district, 188 kilometers from Bududa, Petua Adongo also faced the effects of climate-change-induced disasters. Over the past two years, the 23-year-old has had to rebuild her grass-thatched house twice.

Choking with emotion, she recalls the 2019 floods that swept her cassava garden and submerged her house, forcing her to move into a shelter. Adongo was pregnant with her third child at the time and went on to share space with over 100 families in three classroom blocks at Amusia Primary School.

“There was no food because it was all washed away. Reaching markets where we could buy food was not easy because the roads too had been washed away,” Adongo explains. She now relies on herself, as her husband moved to Kampala, 370 kilometers away, for work.

In Akurao, another village in Katakwi District, Patrick Osia says the area receives rain for only three months in a year. Unlike low-lying Amusia which floods during the wet season, Akurao is now prone to drought and, according to Osia, many families are moving out of the village to nearby districts for work.

“Families have moved and are still moving because they cannot handle the situation [drought]. When you are in the village, agriculture is a main source of living,” Osia says. “If you complete a year without getting anything from your garden, you are forced to go to other places where you can get something to eat.”

The 34-year-old father of three is also considering moving to nearby Soroti or Mbale to seek employment. “I will just go and look for a job where I can survive. I will move alone, then when I stabilize, I will send support to them [family] and if things get better, I will take them with me,” he adds.

In Amudat district in the north-eastern sub-region of Karamoja, drought has hit pastoralists and surrounding communities. Adapting to agriculture has become even harder. 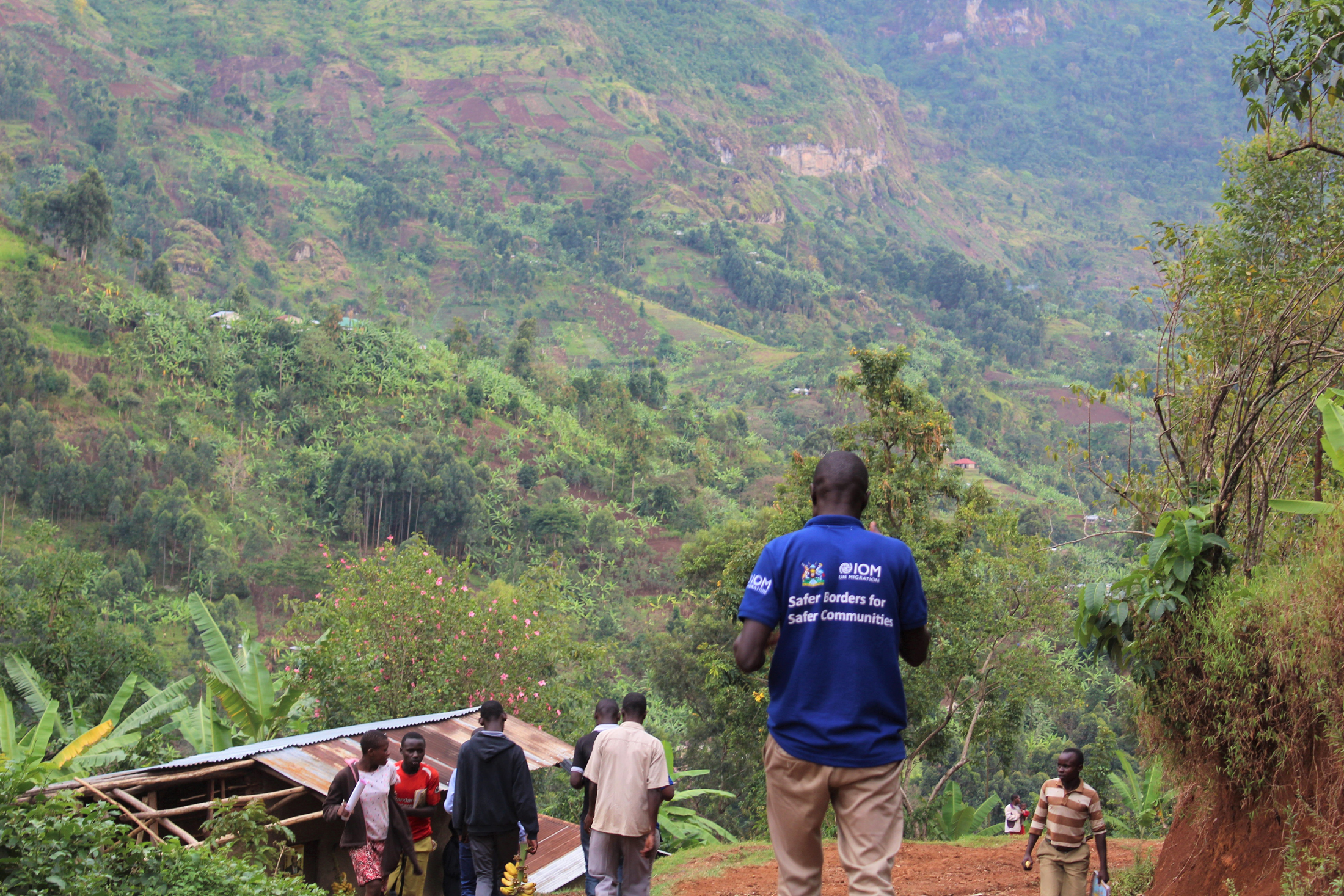 Data enumerators going down the steep slopes of Bududa in March 2021. The enumerators had to walk for about 10 kilometers to reach Nametsi due to the terrain and impassable roads. Photo: IOM/Abubaker Mayemba

Nicholas Anamile, from Ochorichor village, says the biggest challenge is for families to find enough food, along with securing pasture and water for the livestock. Poorer families are faced with even harsher realities. Adults survive on vegetables, maize, and sorghum stalks from Mbale and surrounding districts whereas the little available milk is reserved for toddlers, the sick and the elderly. With many streams being seasonal, residents are forced to travel even further to find water – distances of 90 kilometers are not unheard of. This trend takes place between December and April and pastoralists only move back to Ochorichor during the rainy season, which is usually around June. And yet when the skies do open, houses and gardens near water streams are promptly washed away.

The IOM-Makerere research project will also cover Katakwi and Amudat districts to the northeast. “Let the researchers get this information because we also need it most so that it helps us in lobbying and planning,” says Simon Okello, the District Environment Officer for Katakwi. The villages of Palam, Akurao, Amusia, and Usuk are hugely affected by drought and floods but receive little assistance due to the lack of substantive evidence, Okello adds.

IOM will provide technical support to enable the villages to develop action plans for environmental migration and displacement. More broadly, IOM will work with the Office of the Prime Minister in supporting the government to develop a National Action Plan.