For the Internally Displaced in Mozambique, Finding Identity is a Step Towards Recovery 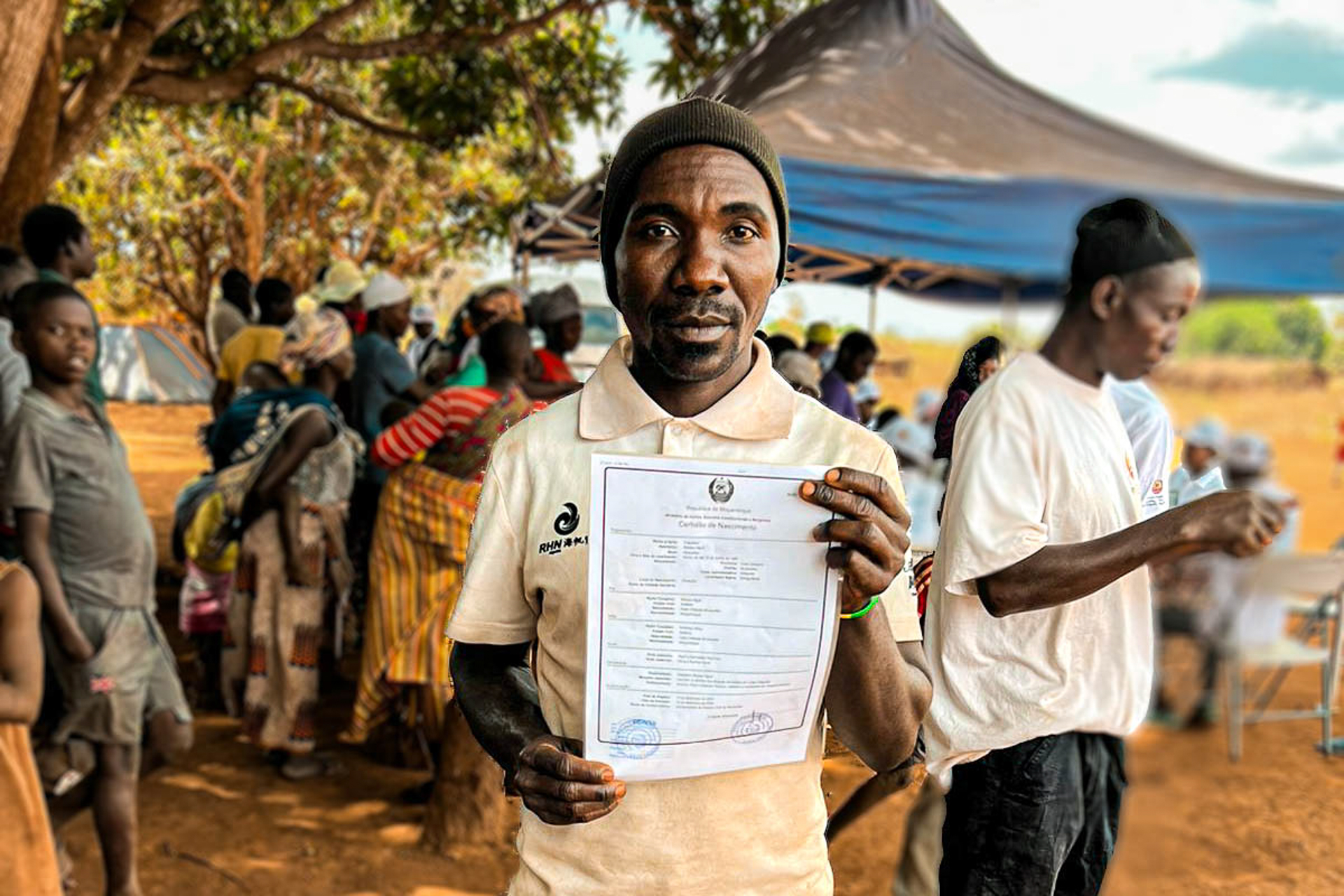 Balama, 19 September 2022– Celestino Bissau is a 35-year-old father of five children. Prior to July 2021, he and his wife had established their life in Muidumbe, in Northern Mozambique.

When conflict broke out in July as armed groups clashed, Celestino and others were forced to flee their homes, leaving everything behind.

Since 2017, the northern region of Mozambique has been the target of assaults by armed groups. These clashes, alongside disasters, have resulted in the displacement of almost 1 million people inside the country. "When you hear the shootings and see the houses on fire, there will be only one thing on your mind, and that is getting out of there with your family," says Celestino, recalling the events leading to them fleeing. “I entered my home and looked at the expressions on my children's faces; they were terrified.” 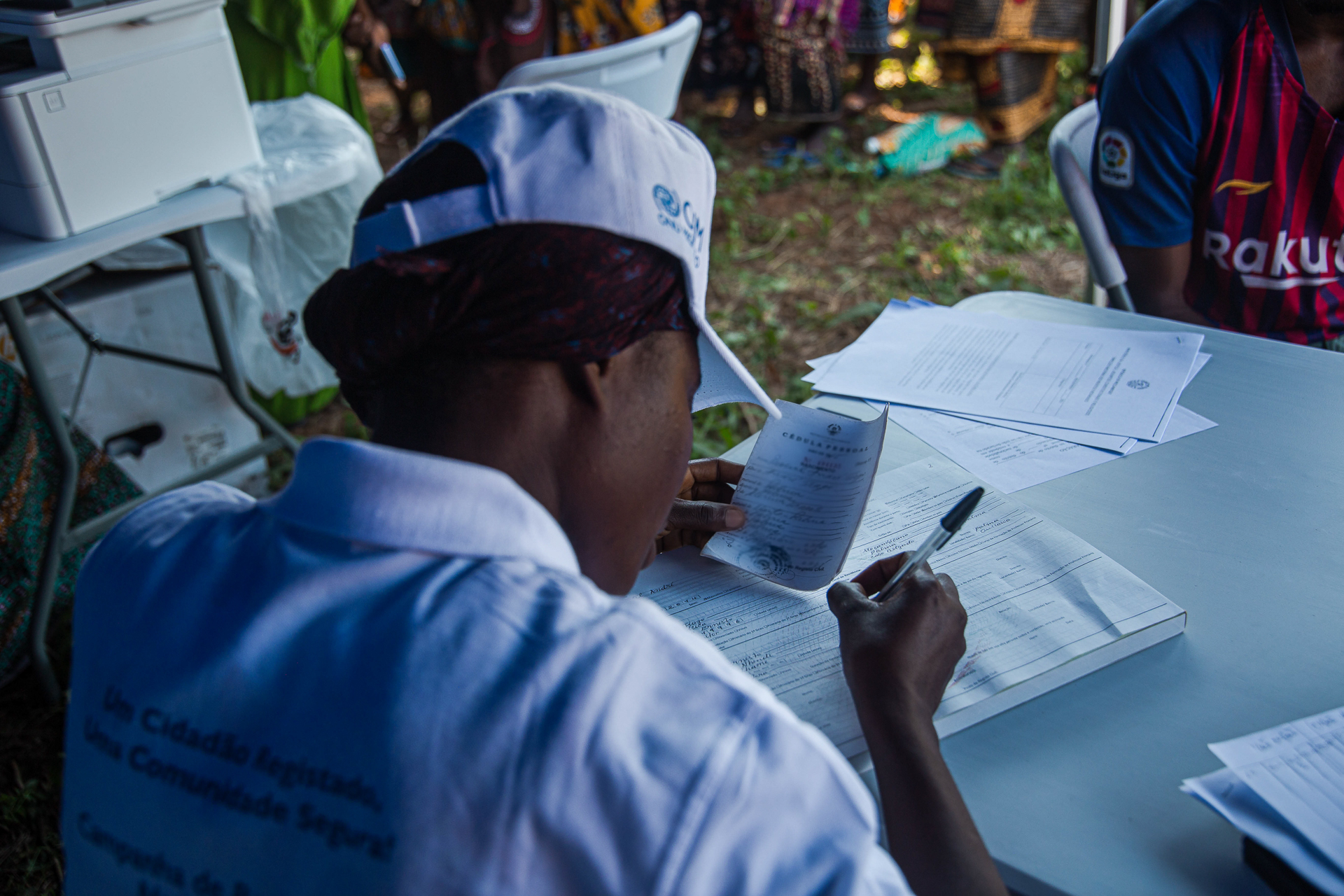 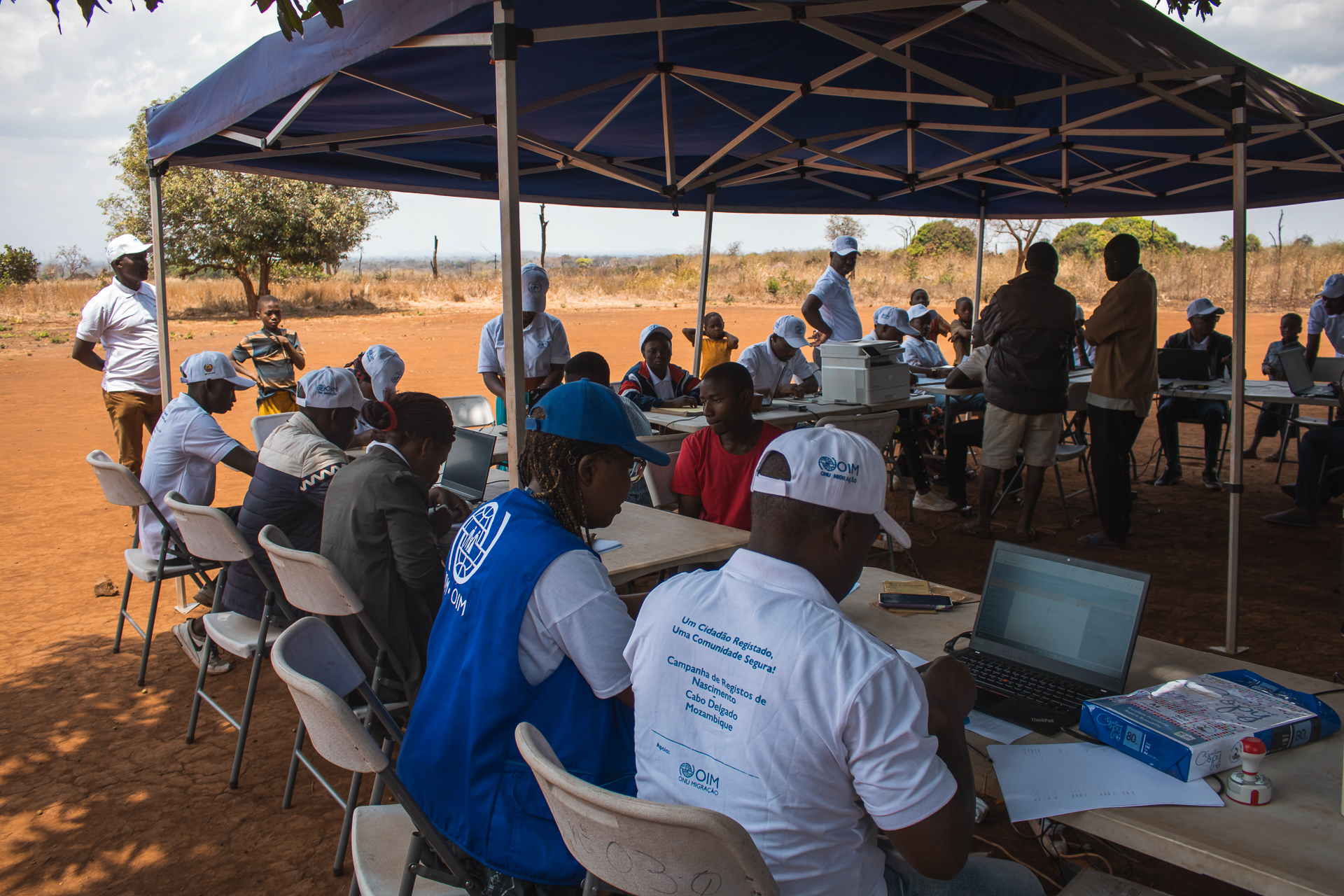 Celestino, alongside hundreds of individuals from the town of Muidumbe, gave up all they had and made a hurried exit to Mavala, about 190 miles (305 km) away.

“We were just retreating in the direction of a location that was unknown; I wanted to be with my children,” says Celestino.

Celestino and his family settled as Internally Displaced Persons (IDPs) in a modest cottage in the town of Balama, located in the district of Balama in the province of Cabo Delgado. Balama is home to more than 11,000 people who have been displaced as a result of the conflict. Almost 70 per cent of IDPs in Cabo Delgado are living in host communities, with the population doubled over the last five years.

Celestino and his family, like many other individuals who have been forced to flee their homes as a result of the conflict and disasters, face even another bigger challenge: They lack any civil documentation to prove their identity as Mozambican.

"We did not have the time to take anything, and our documents burned in our house. It is quite difficult to function without your paperwork. I had the impression that I was all by myself,” adds Celestino. “It restricted my freedom of movement to the point that I often had anxiety about the possibility of being stopped by authorities and not being able to provide evidence of my identity. I constantly put my own safety at risk by going out in order to protect my family from any problems that may arise."

In northern Mozambique, four people out of five do not have civil documents. They were lost during their journey, destroyed, or never owned.

The International Organization for Migration (IOM), with the support of the Foreign Policy Instruments (FPI) of the European Union (EU), the German Cooperation, and the Bureau for Humanitarian Assistance (BHA) of the United States Agency for International Development (USAID), is assisting the government of Mozambique in its efforts to provide civil documentation to people who have been internally displaced so that they can acquire national identity cards and register their births.

"It is essential to have a document so that you can continue working and avoid missing out on any possibilities. Tomorrow, I will bring all of my children to the registration office in order for them to be able to enroll in the neighborhood school for the next semester," Celestino says joyfully. 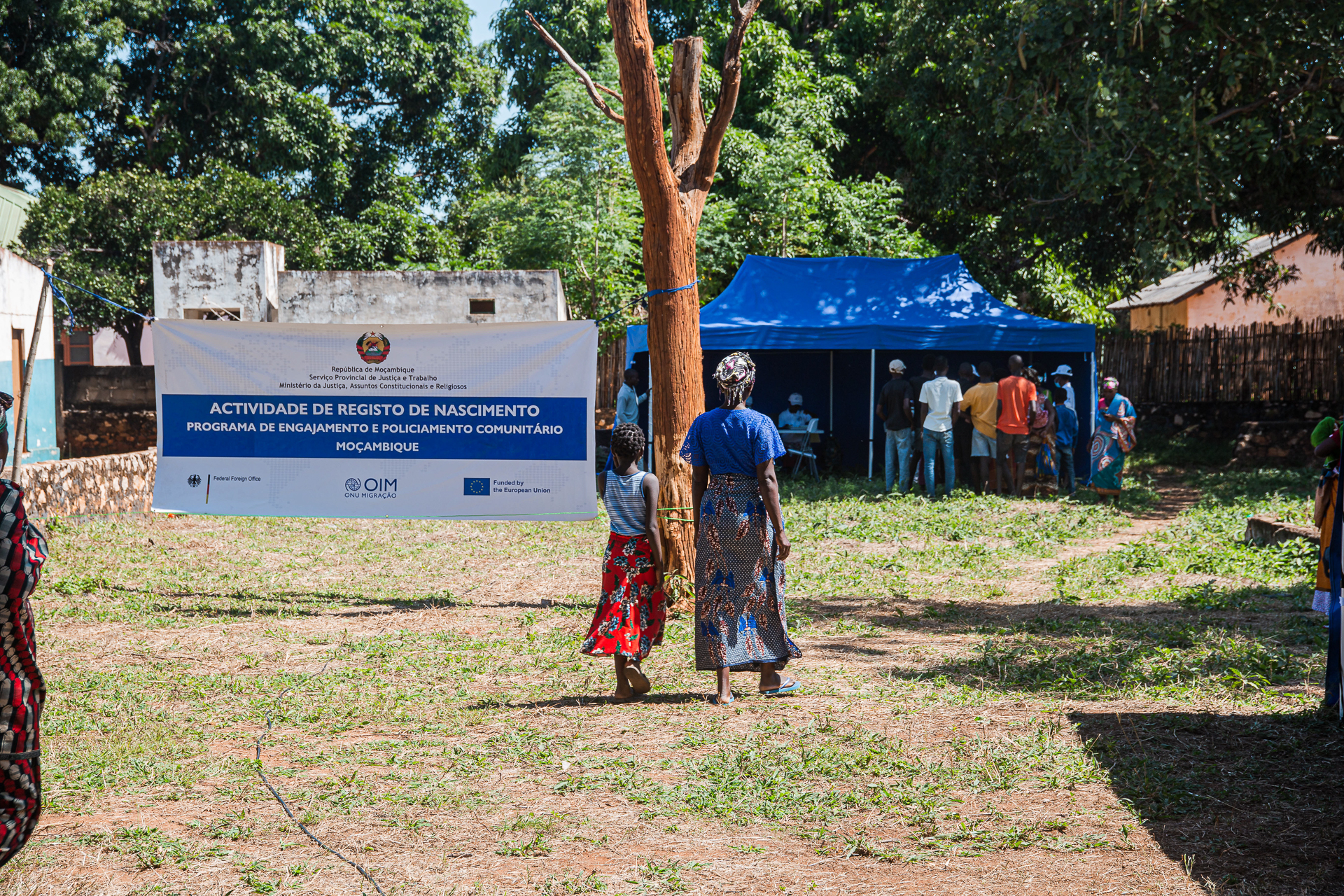 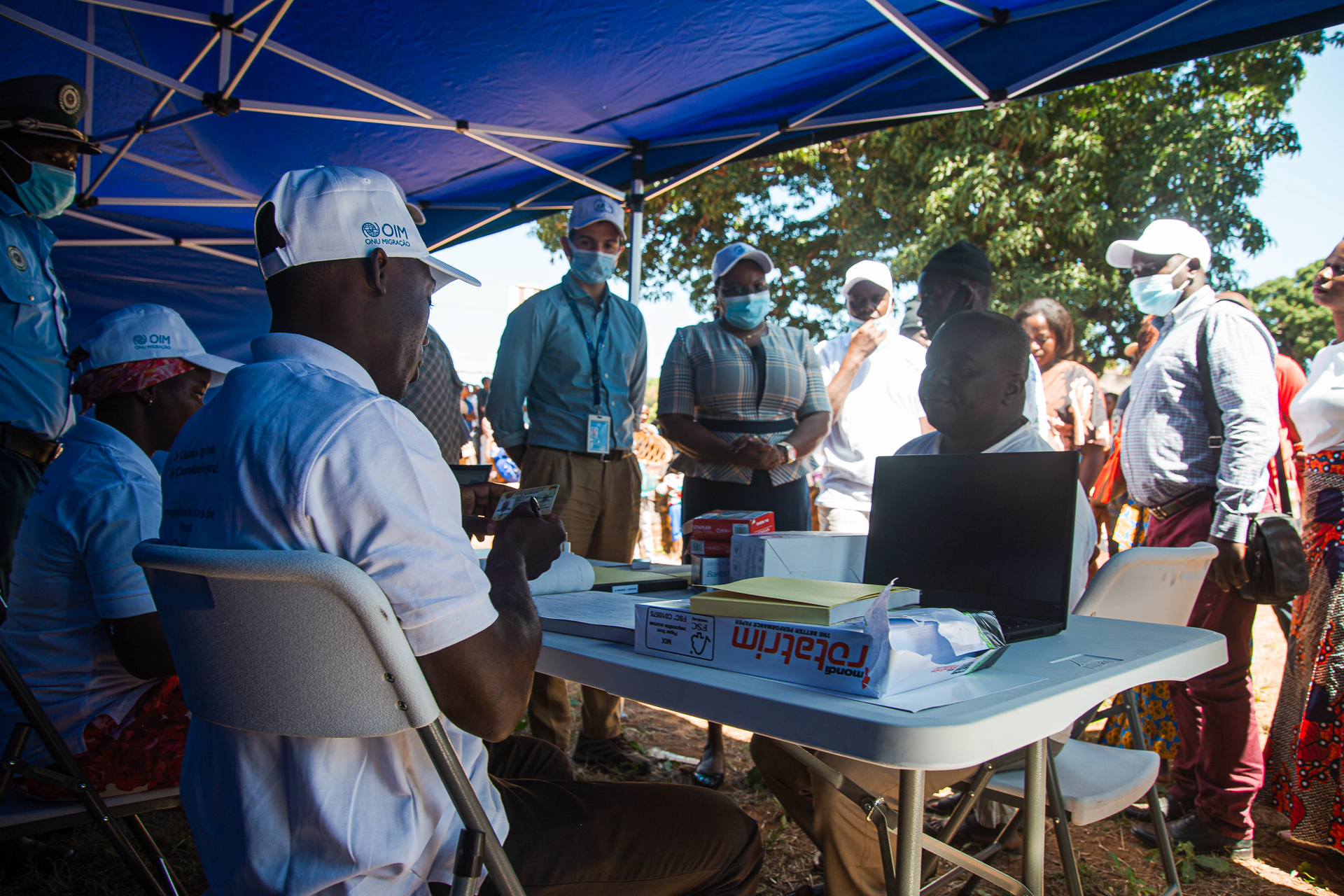 Many parents take their children to the registration office in order to register them for school. Photo: IOM Mozambique 2022

IOM was the first UN agency to develop a specific Legal Identity Strategy, in 2022. The Organization is committed to increasing its focus on legal identity as a core enabler of sustainable development, and safe and regular migration. The Strategy aims to tackle several challenges related to people on the move and access to documentation, presenting an approach that will allow for legal identity to be addressed more consistently as part of existing and upcoming IOM interventions.

This document helps Member States and provides guidance to operations on the ground, such as in Mozambique, where IOM collaborates with the Government to issue civil documentation to more than 100,000 undocumented migrants and local communities affected by the conflict.

This story was written by Matteo Louis Theubet and Moayad Zaghdani, part of IOM’s team in Mozambique.