Pibor – “Wait, so you mean to tell me that this water here is the same water coming out of that tap over there?” I ask in total amazement.

“It is the same water, but before the surface water reaches the taps, it undergoes various steps to make it safe for drinking,” he explains.

James and I are at the Surface Water Treatment (SWAT) plant in Pibor, in South Sudan’s Greater Pibor Administration Area (GPAA), constructed by IOM’s WASH Emergency Preparedness and Response team.

In late 2020, severe flooding displaced hundreds of thousands of people in many parts of South Sudan. The displacement by flash floods followed an earlier wave of communal violence in the first half of 2020 which also uprooted thousands.

More than 800,000 people were affected and left in urgent need of humanitarian assistance including food, shelter and access to safe drinking water in Jonglei, Upper Nile and Greater Pibor Administrative Area.

In Pibor, boreholes were completely submerged, leaving only the metal arm of the handheld pumps poking above the water.

“The community had nowhere to get water for drinking. All the boreholes in the area were either broken or completely under the murky flood water,” says James Lagu.

“Our first action of response was to provide the most vulnerable with water purification sachets; then we constructed this plant,” he adds, pointing at the SWAT operation. 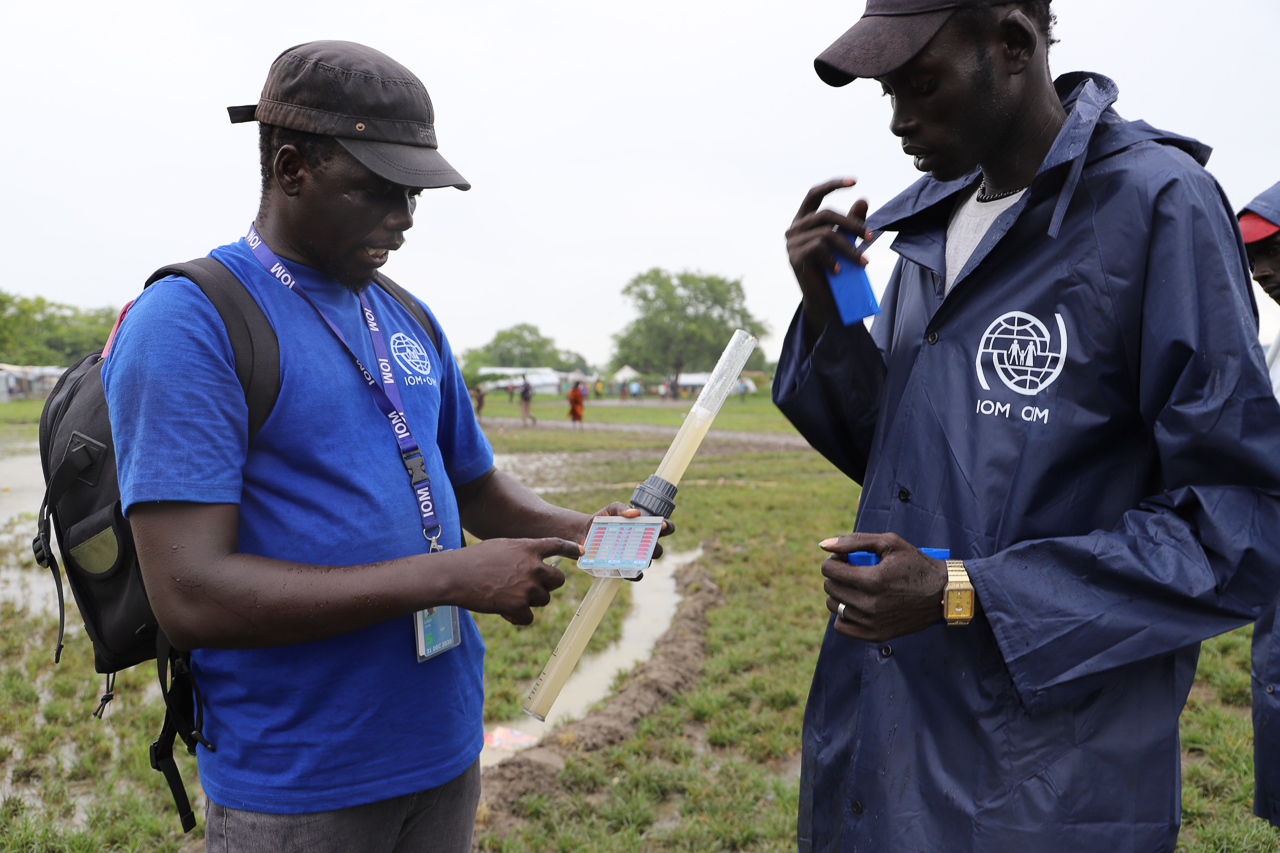 The surface water is pumped from a nearby swamp into onion tanks. At this stage, any solid matter like sand and pebbles sinks to the bottom of the tank through a process called coagulation and flocculation. Next, the water, albeit still unpurified at this stage, is pumped into three big bladders, each with the capacity to hold 20,000 litres of water, where it is disinfected with chlorine to destroy any harmful bacteria. The water is then tested and is eventually piped to the nearby taps for use by the community. 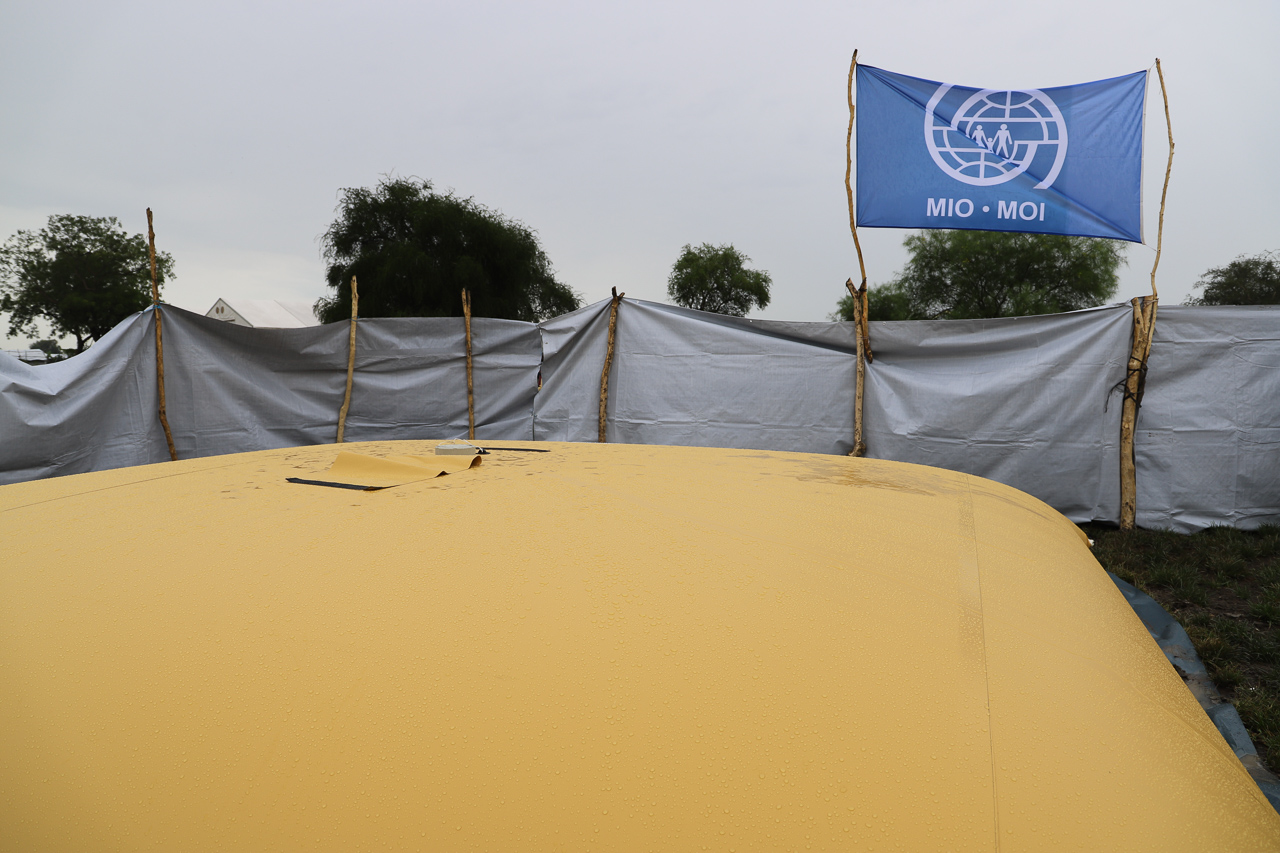 The fact that the team can set up this "workshop" in two or three days to provide safe drinking water to more than 3,000 people per day is quite impressive. People who, without this system, would have been left with no choice but to drink unsafe and contaminated water, which would have put them at risk of waterborne diseases like cholera, diarrhea and others.

"Yes, we were quick to act," says James Lagu. "We have to, it is the premise of IOM’s emergency response."

Pibor town saw an influx of communities displaced by flooding in their villages. More than 6,000 people from neighbouring areas such as Likuangole and Gummuruk sought refuge in parts of Pibor town that were on higher ground and not flooded.

Over the sound of the generator used to pump the water, we could hear voices coming from the tap stands.

We walk over to where they are as the clouds start to clear, instantly bringing in the harsh sun that had been hiding behind them.

Unpredictable weather, I think to myself. 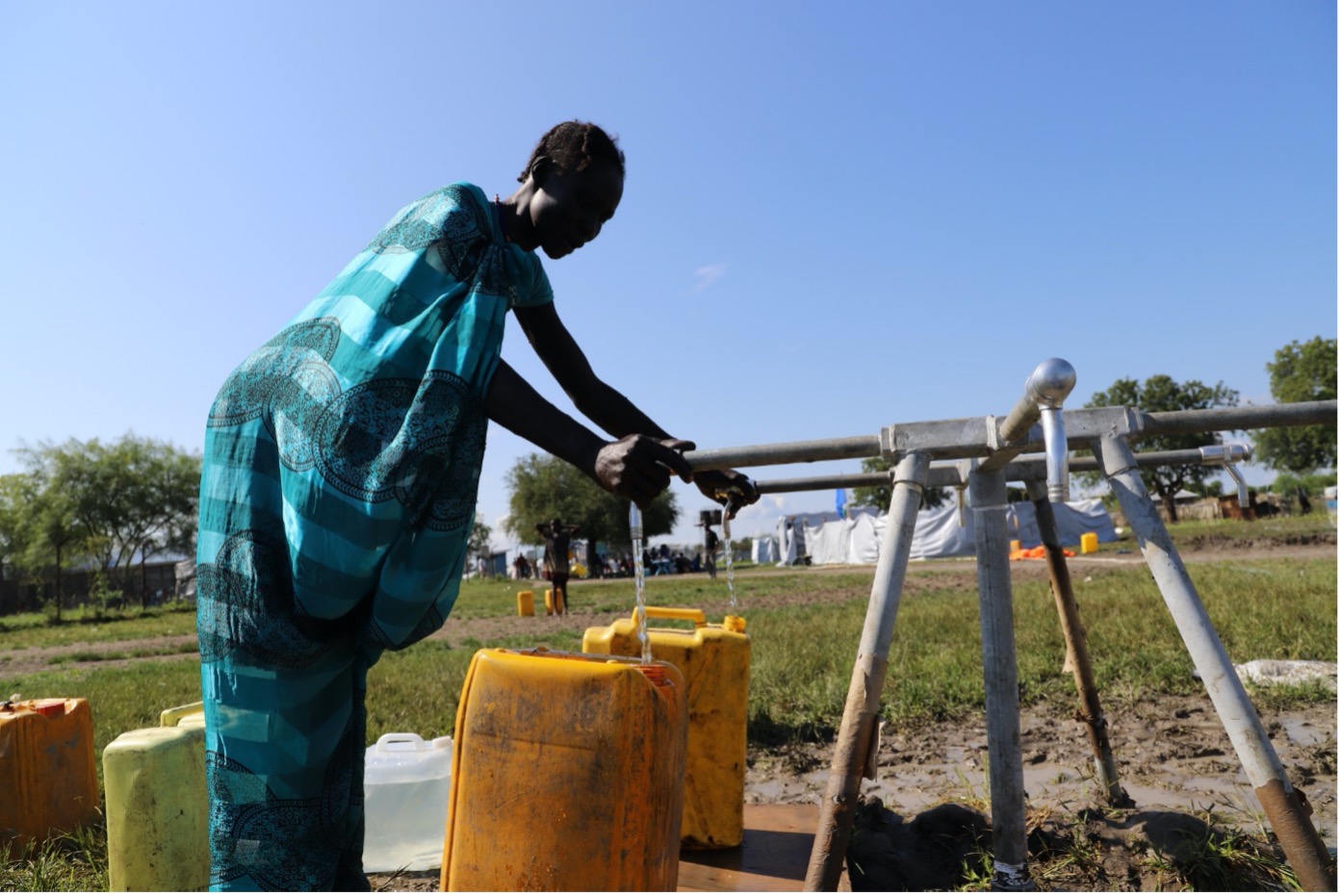 "Male," I call out to the ladies who are filling their jerricans with the treated water from the tap.

"Male," they greet back in Murle, the language predominately spoken in the Greater Pibor Administrative Area.

A few hellos and how are yous is as far as my Murle goes. With the help of one of the Water Management Assistants working at the treatment site, as a translator, we talk to the ladies.

"I don't know where we would be getting water," says 45-year-old Thilalo Allan. "Would we be drinking dirty water since the floods have swallowed our boreholes?” she asks rhetorically.

"Our children would be thirsty or sick from the dirty water," says Thilalo, a mother of six. 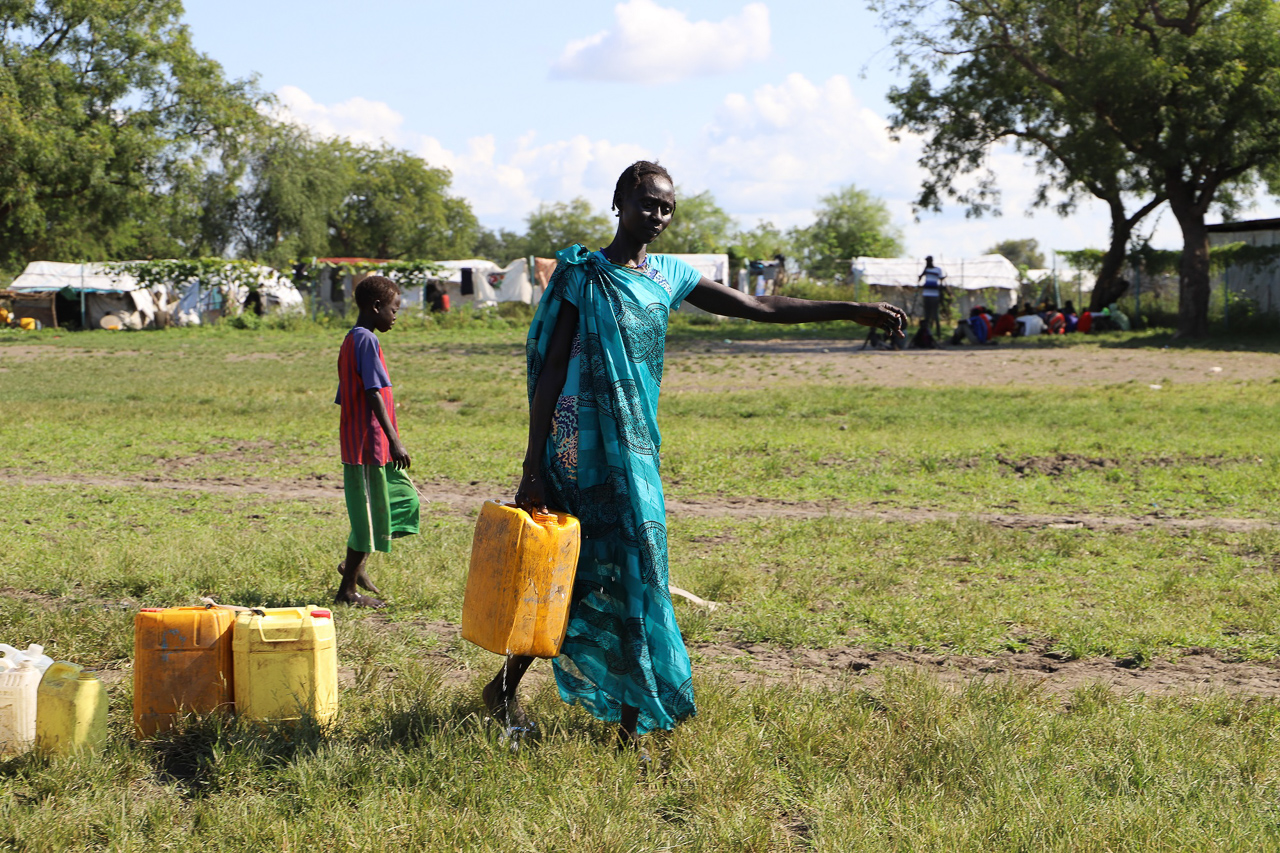 Mangalla, a town about 400 kilometres south of Pibor, near the capital Juba in Central Equatoria, also saw a large influx of internally displaced persons (IDPs) due to flooding in Jonglei state. IOM’s WASH Unit provided technical support to a national NGO, the Rescue Mission, to construct a Surface Water Treatment System to provide access to safe drinking water for the IDPs and the host community. 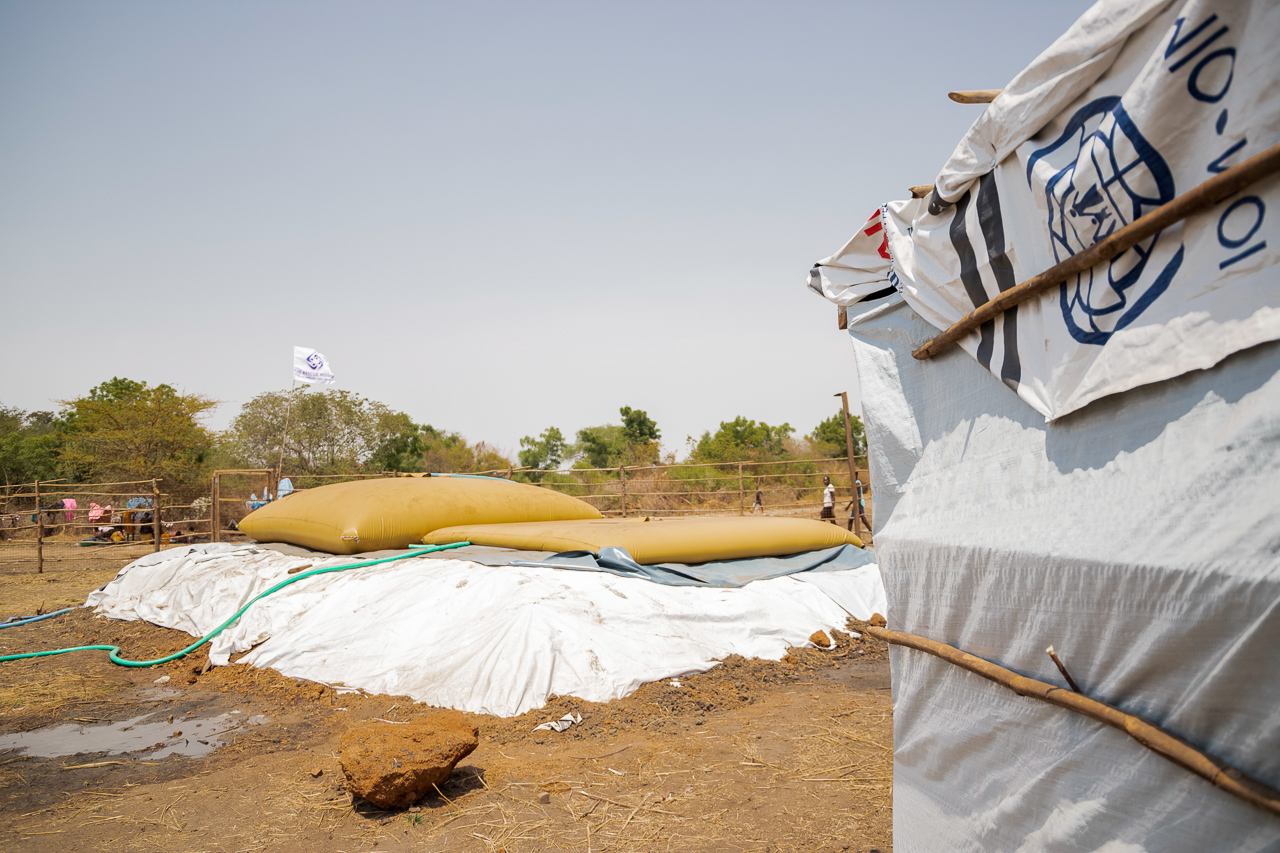 The scarcity of water continues to be a major threat to people who have fled their homes after losing all their livelihoods due to the floods. As the country continues to grapple with the aftershock of the unprecedented floods, humanitarian partners including IOM continue to work together to bring lifesaving assistance to the most vulnerable. 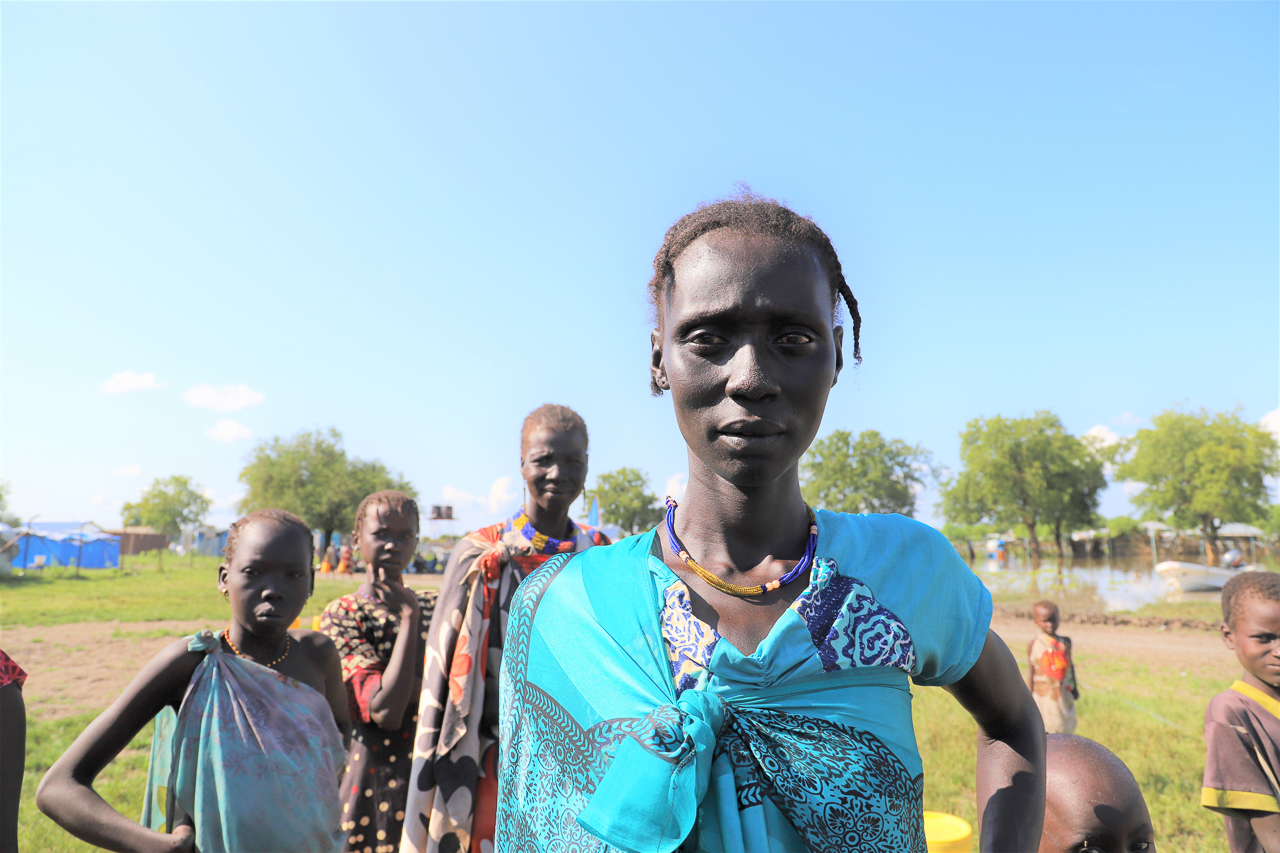 “It is not that we do not want to help ourselves,” says Thilalo Allan. “But how do we help ourselves when it never stops? When it rains, the water kills us. When the rains stop, the guns kill us.”

The installation of the Surface Water Treatment System by IOM’s Water, Sanitation and Hygiene Unit is funded by the European Union’s Civil Protection and Humanitarian Aid Operations (ECHO).