Less Catch, Less Cash: How Climate Change is Affecting Fisherfolk in the Philippines 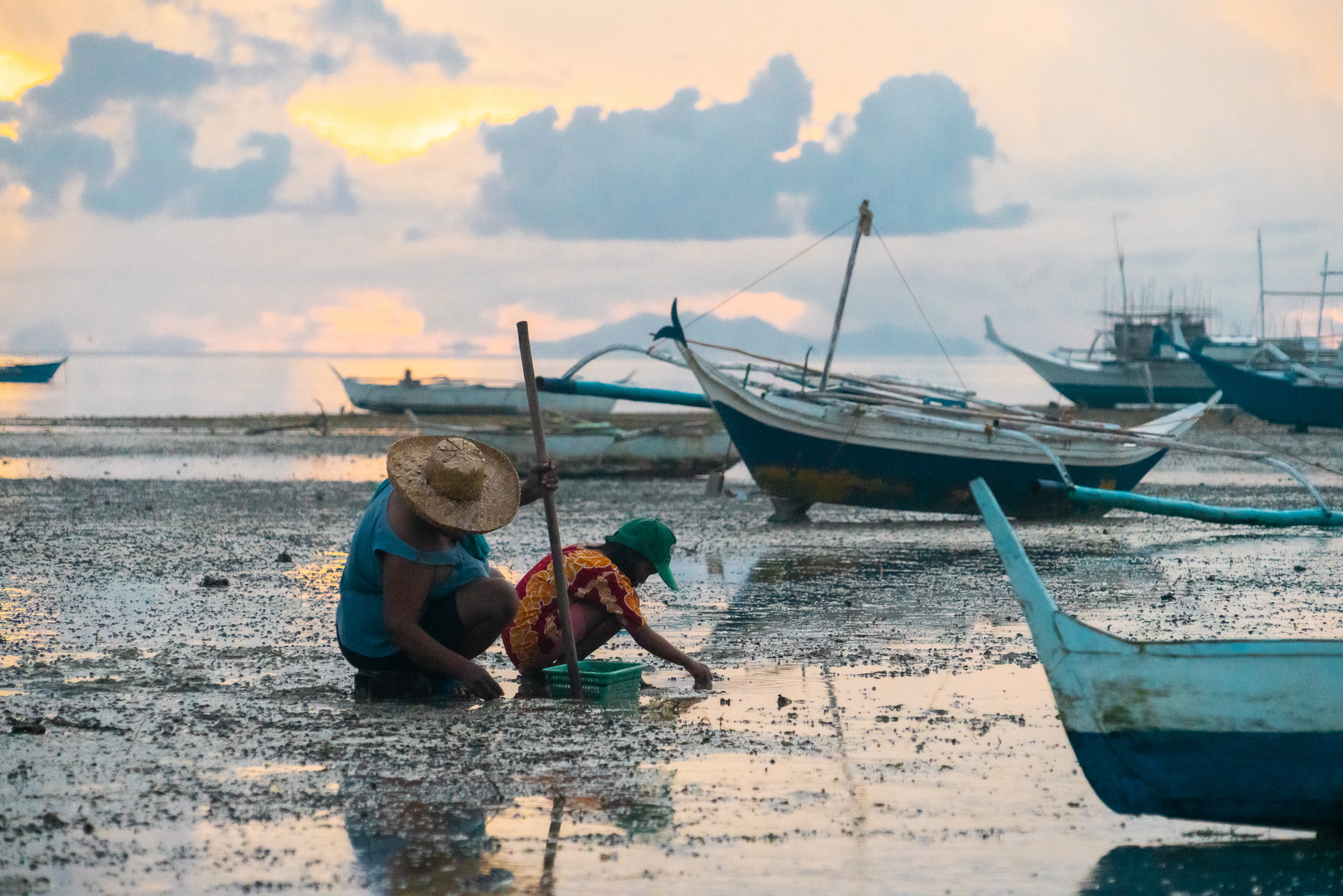 Bantayan Island, 14 March 2022 – Bantayan, a small coastal island in central Philippines, is home to approximately 3,000 people – around 80 per cent of them fisherfolk and the rest, farmers.

In Bisaya, the local language, bantayan means to look closely. As its name implies, bantayan is a signal for everyone to pay attention. It is a reminder that the realities and consequences of the climate crisis go beyond the discomfort of unpredictable weather. Their voices are the warning the world needs to hear. They are the people that the world needs to protect. 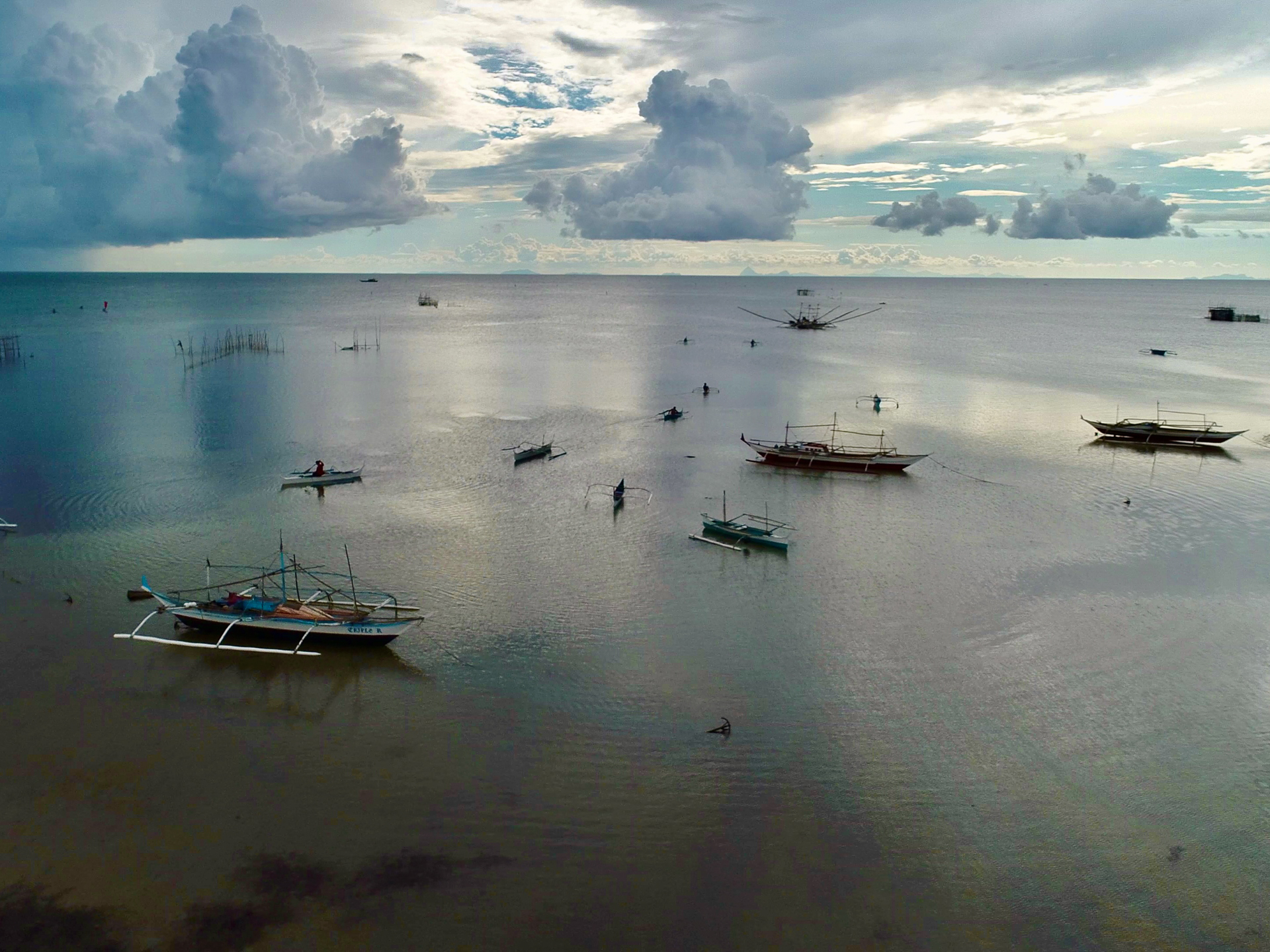 “My entire family, except my husband, is from here. All of us are fisherfolk and we heavily depend on the sea for our daily sustenance and livelihood.”

Danggit is a breakfast favourite among Filipinos to start off their day. Making it, however, is not as easy as it appears. It takes a considerable amount of time for danggit makers like Virginia to prepare it, from buying a batch of fresh catch, slicing them open and salting them in containers overnight. They then wash them in the sea the next day and set them up on drying racks under the sun. On days with good weather, it takes a shorter time to dry them, while on bad days, much longer. The dried fish is then packed and sold. With the effects of the changing climate, there are more bad days than good.

Vendors like Virginia were given drying facilities by the local government, built in community centers or family homes, to provide them with better livelihood opportunities. Unfortunately, many vendors had to close shop due to the COVID-19 pandemic with only a few businesses surviving. 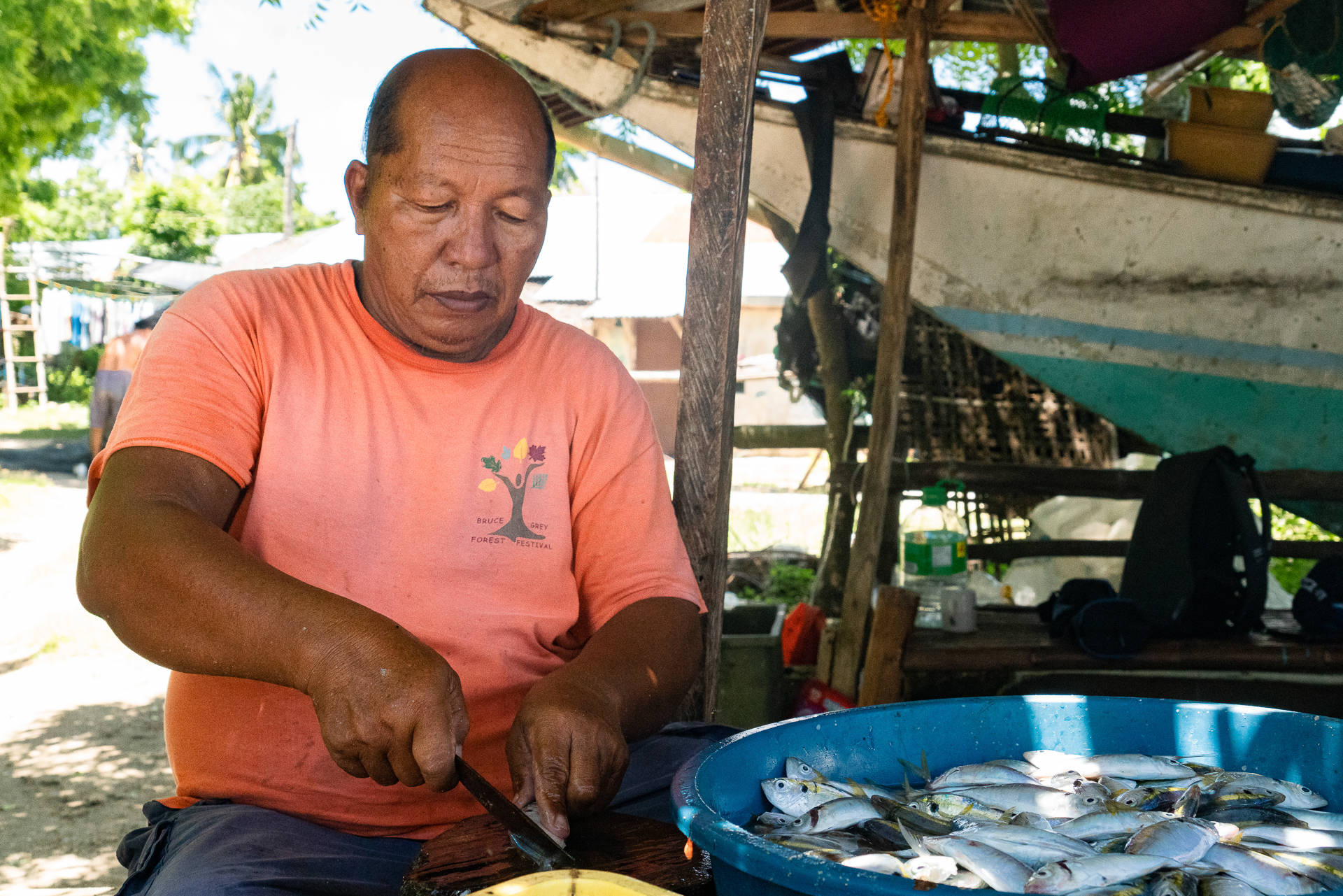 Members of Virginia’s family help in cleaning and preparing freshly caught fish to be salted, dried and eventually made into danggit. Photo: IOM

In the past, they used tabagak, a special kind of fish, to make danggit. With more people interested in this local delicacy, demand for it has increased over the years. Notably, however, the supply has significantly dwindled due to frequent changing , overfishing and other illegal fishing activities on the island. Now they use the commonly sold and cheaper varieties of fish like caraballas and malibno.

“We are trying to find alternative varieties of fish that we can sell at a higher price, but fishing here in Bantayan is no longer as it once was.” Says Virginia, “I remember my father bringing home varieties of fish that I barely see these days. I’m worried that in the coming years, there won’t even be enough caraballas and malibno for us to catch.”

Many of the locals depend on this for their livelihood and the more they catch, the less fish there is left. Aside from the noticeably smaller catches, locals have also observed that the shoreline is receding. There used to be a lot of houses along the shore, but families have slowly been forced to move inland since the water was slowly closing in on their homes. 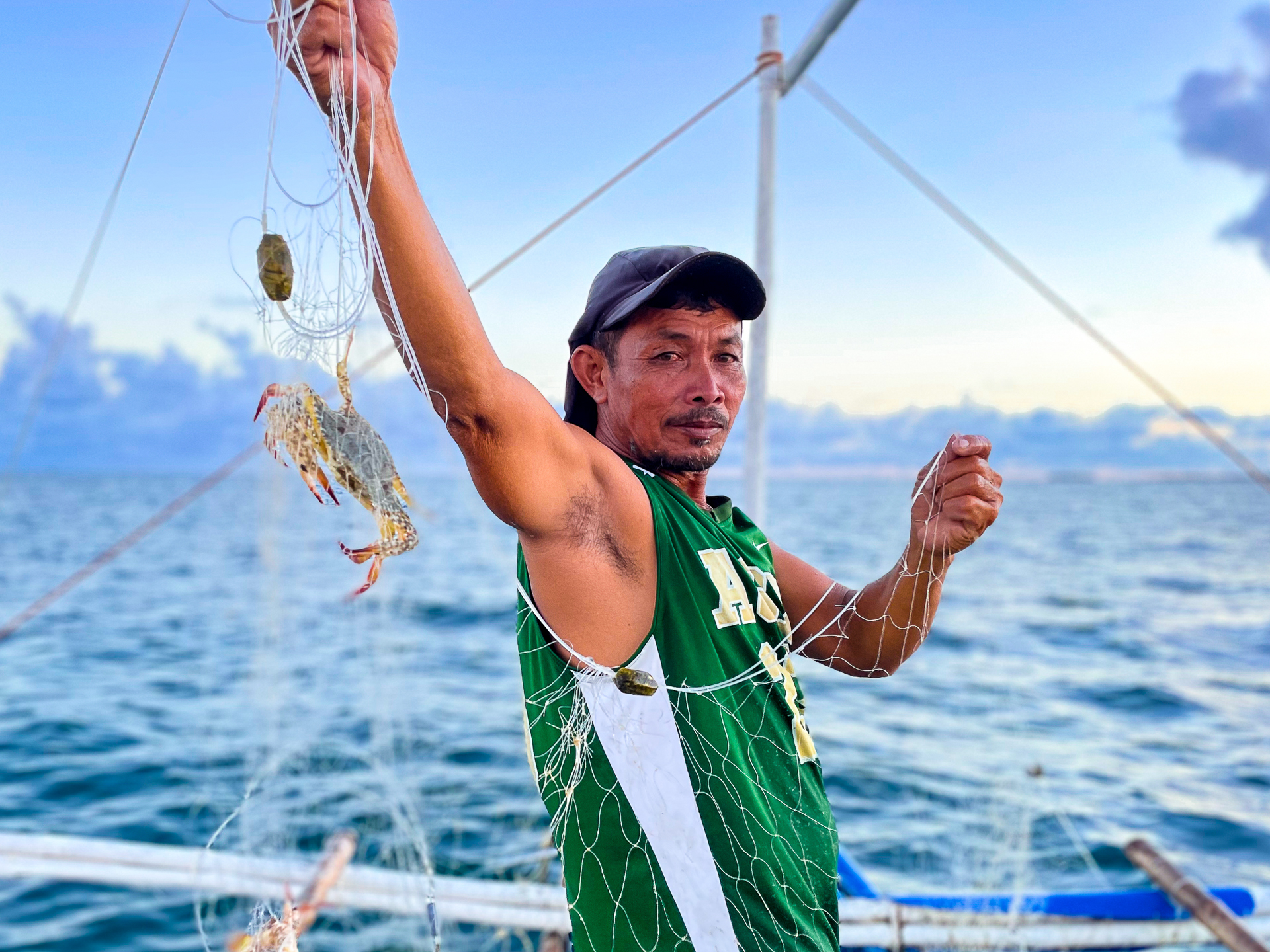 What used to be abundant to catch has become more difficult to come by and has pushed fisherfolk to set up their traps wider and farther from the shore. Photo: IOM

For Brian, one of the youth leaders in Barangay Guiwanon, Bantayan, being a fisherman is a tough job. The catch has been significantly less than it was before and the price of gas for the pump boats is even higher. The money spent on gas and the risk of fishing under unpredictable weather conditions still doesn’t guarantee enough catch, if any at all.

Many of the youth in Bantayan have seen first-hand how their parents and relatives struggle to make ends meet with the little catch. Many have moved to the big city and get access to alternative livelihood sources. 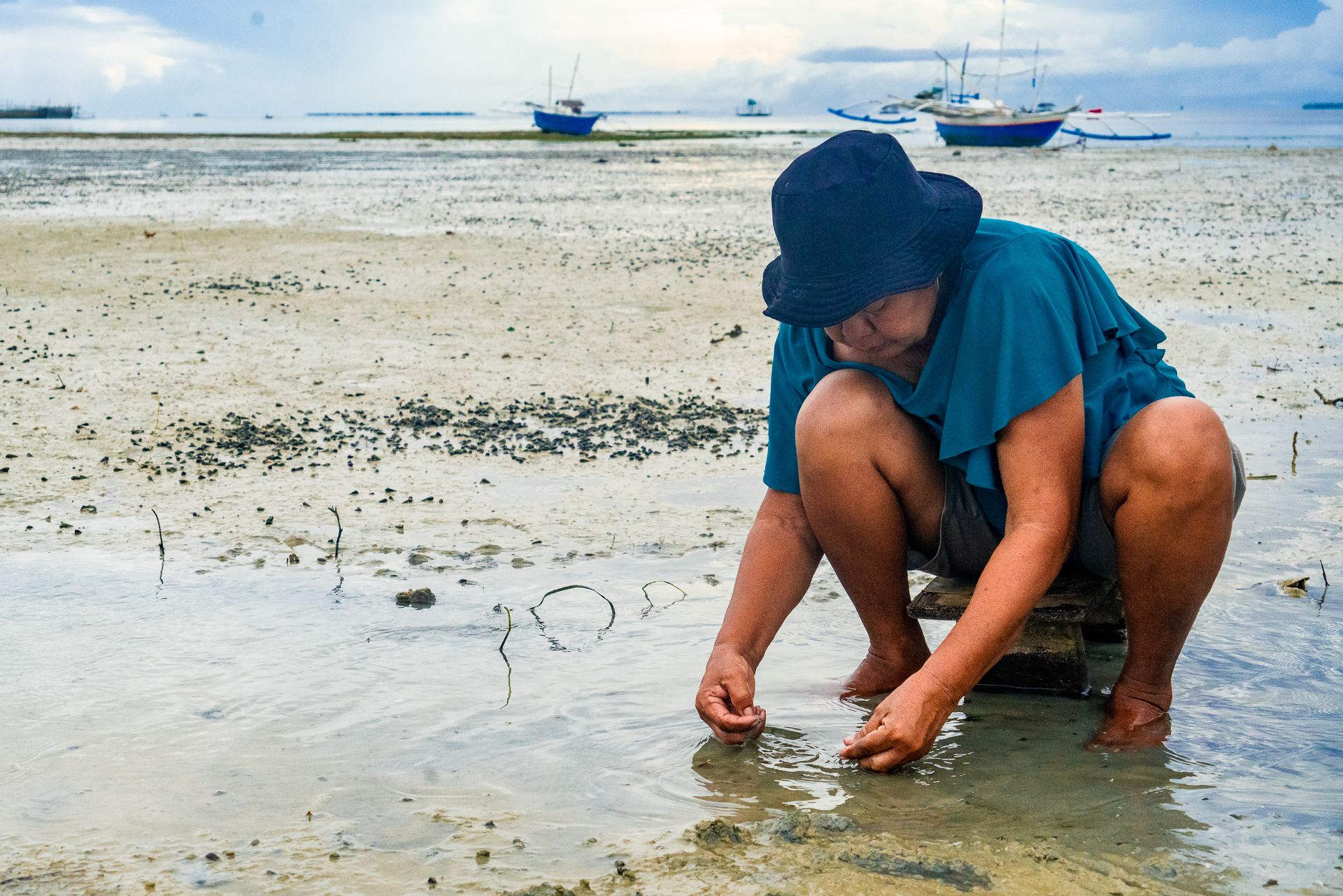 John is a fisherman and local community leader in Lipayran, Bantayan Island. Previously engaged in dynamite fishing for 10 years, he admits that he used to focus on the immediate – catching enough fish for the day – and not think about the effect of his actions for future generations.

“I contributed to damaging the reef, the marine life here, but I am making amends for the things that I have done.”

In 2007, he participated in a community workshop on environmental and marine life preservation that marked a turning point. “I was enlightened and decided to stop dynamite fishing and shifted to the natural way of fishing.”

He started to encourage others to join the campaign against illegal fishing and was initially met with resistance and threats from other fisherfolk. “It’s difficult to change people’s behaviour. For every 100 people I talk to, I can only convince a handful of them and only two or three remain committed to the cause.”

While John’s advocacy of preserving marine life can be difficult, he hopes that one day, his decision of turning away from illegal fishing activities and encouraging other fisherfolk to do the same, will be worth it.

“If we want the sea to be as abundant as it has always been, we must take care of it.” 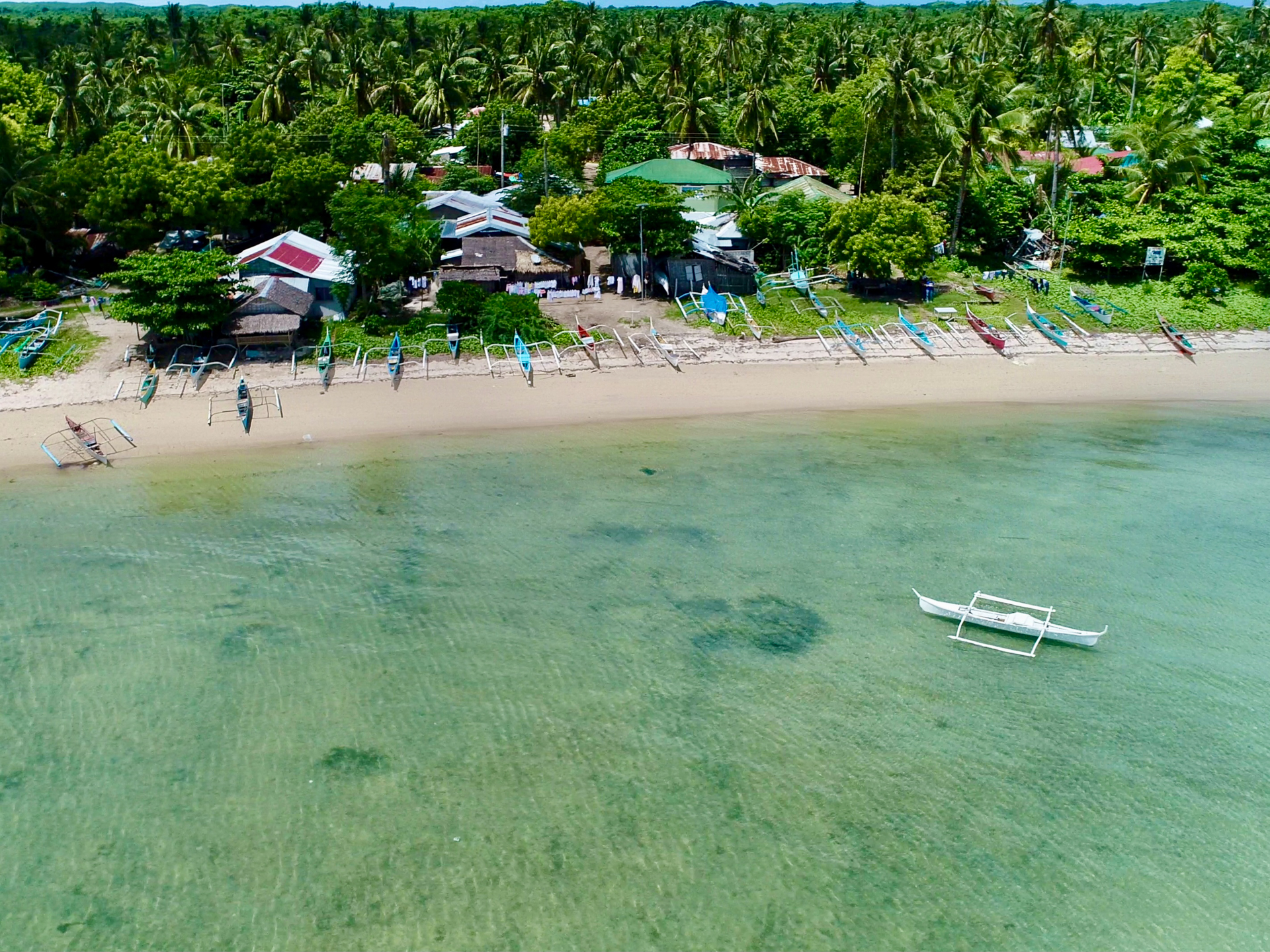 Migration and the climate emergency

IOM’s latest report, Framing the Human Narrative of Migration in the Context of Climate Change shows two significant findings. First, the impact of the climate emergency on migration is dependent on the quality of one’s livelihood and access to security, peace and stability. And second, planned and orderly migration is a voluntary adaptive strategy for climate emergency while unplanned migration such as distress migration occurs as involuntary adaptive strategies.

Evidence-based programming for affected populations will ultimately enhance efforts to respond to their immediate needs while ensuring migration is a sustainable adaptation tool and risk mitigation for those affected by climate change.

As these impacts often affect women and other vulnerable groups disproportionately, their seat at the table is critical in ensuring their voices are heard in the development of programmes that directly shape the movement of their lives and livelihood. 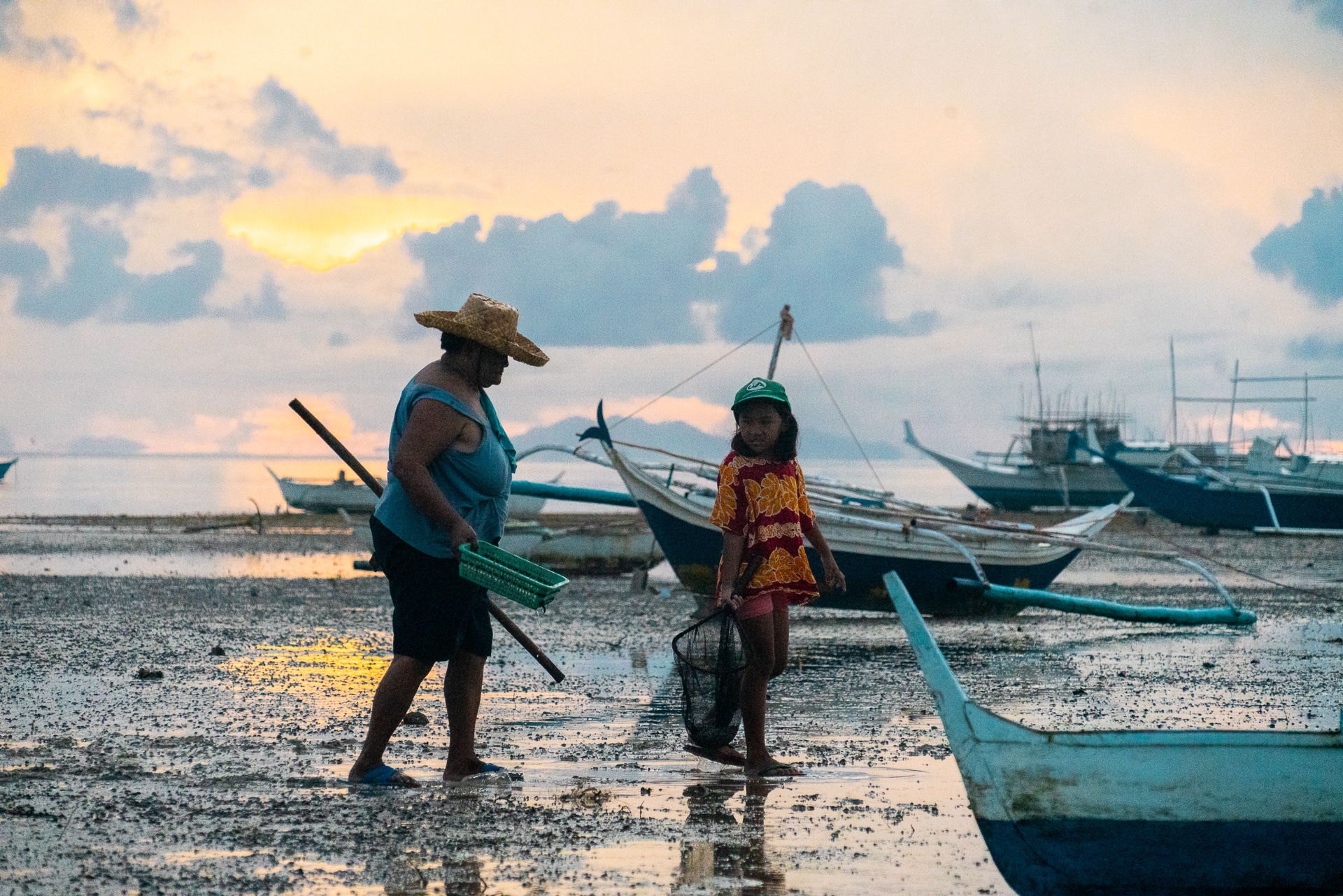 IOM Philippines works with vulnerable communities such as Bantayan which are facing the worsening effects of the climate crisis. Through its programming, IOM aims to engage vulnerable communities in climate resilience discussions and explore the current state of migration in the context of the climate emergency in the Philippines, impacting four main sectors including farmers and fisherfolk, women, the elderly and the urban poor.

Equal representation of vulnerable populations in crafting climate policy will determine whether everyone’s needs are addressed. The window of opportunity to take action is short, but it is, as of right now, still open.

The Climate Change Adaptation and Community Resilience in the Philippines (CARP) project of IOM Philippines is supported by the IOM Development Fund.