“He was shot at in the head, I think it was at close range. A situation like this threatens you a bit,” says a tearful Edward Nayebare as he recalls the night armed gold smugglers from the Democratic Republic of the Congo (DRC) killed four of his Uganda border post colleagues.

“After an alert from one of the fishermen, my colleague went to check. He never returned. They [killed] him,” says Nayebare, 29, an immigration officer in Ntoroko, on the southern end of Lake Albert, in western Uganda.

Loyce Amanio, another immigration officer from Elegu on Uganda’s porous border with South Sudan, says many criminals are able to freely enter the country.  “They are armed, so you have to be really professional in the way you do your work.”

Attacks by armed gangs are just one of the many challenges facing officers like Nayebare and Amanio. Their daily tasks serving border communities and dealing with numerous irregular border-crossing points require better skills, equipment and facilities to effectively secure hundreds of kilometres of Uganda’s border.

The country may be landlocked but on the shores of a choppy Lake Victoria. Recently, Nayebare, Amanio and nine other immigration officers joined special training sessions to help them with policing open waters on lakes and rivers.

“We are here to receive specialized maritime training to help us serve better,” Amanio says excitedly. 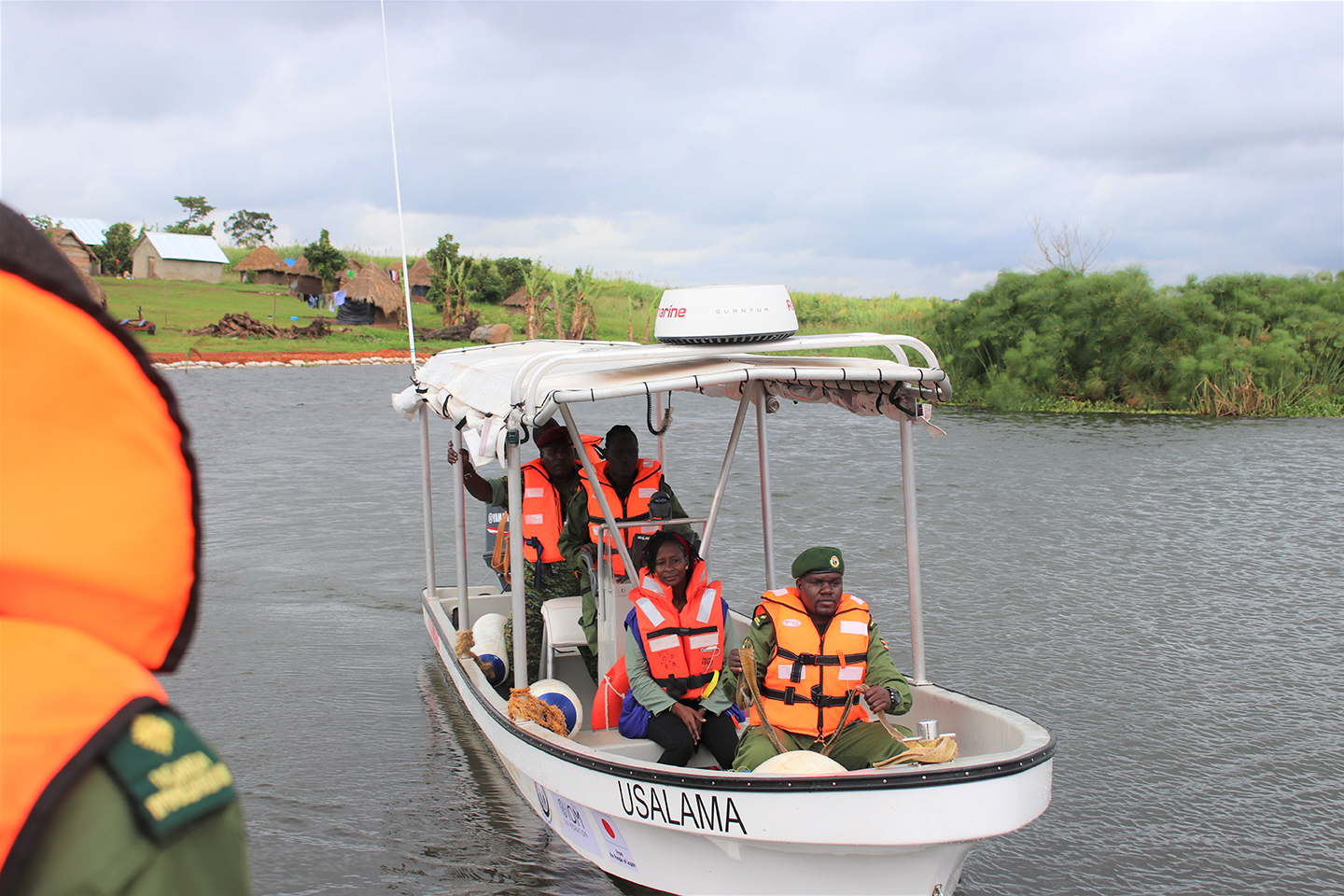 Loyce Amanio (third from foreground) learns the finer points during boat docking training. Immigration officers are trained to drive boats, and to perfect their precision in docking. Photo: IOM/Innocent Vuga

Their training is part of a project run by the International Organization for Migration (IOM) in Uganda, funded by the Government of Japan, and jointly implemented by IOM and the Uganda Directorate of Citizenship and Immigration Control (DCIC). The project aims to improve the legal framework and procedures for regular migration, while addressing irregular migration challenges through improved maritime capacities.

This recent maritime training session aimed to give immigration officers skills to improve border management, detect and combat trafficking in persons and other transnational crimes.

“We have to train the team to curb human trafficking and other maritime security-related challenges,” says chief trainer Captain Daniel Kayihura, from the Ugandan military.

As he heads into the water with his trainees, Captain Kayihura lectures them about international maritime law and then, for more than an hour, teaches water survival techniques before moving on to boat-driving lessons.

The motorized training vessel Usalama – Swahili for “security” – carries six and is equipped with a very high frequency (VHF) radio and computerized navigation command system. It was procured for DCIC by IOM through the project.

Other than swimming and boat driving, the officers in this second phase of training have been taught water rescue and interception techniques, boat repair and maintenance, mapping and the use of GPS, and boat radar systems. Their first training in March 2021 covered military law, basic swimming and leadership skills. 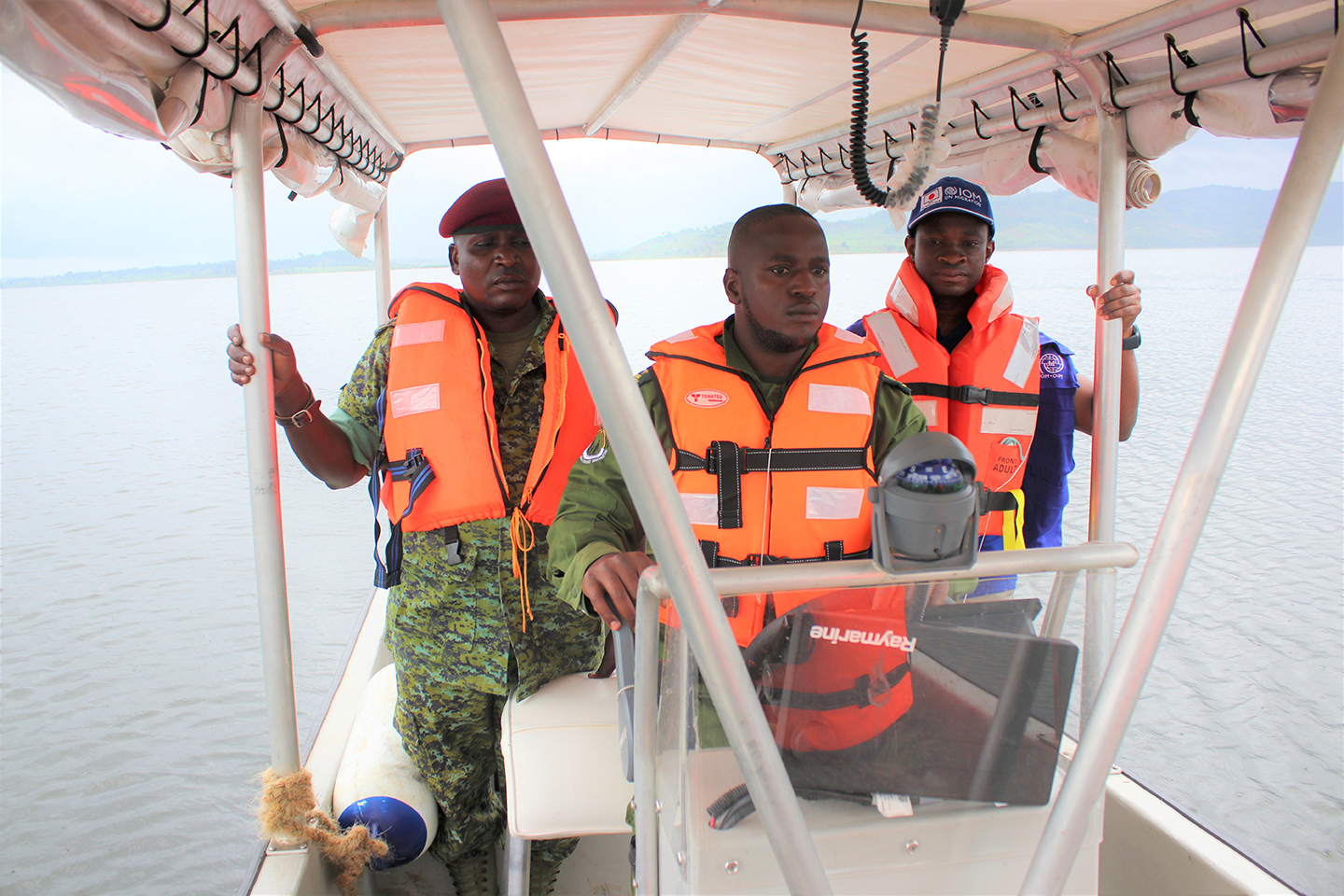 Edward Nayebare, based at Ntoroko border post, receives instruction in how to dock a boat. Photo: IOM/Innocent Vuga

“Everything is going on well. Swimming in the open waters is great, then driving the boats, plotting; going underway… everything is okay now,” says Amanio.

Nayebare, too, is enthusiastic about the training, citing being able to plot coordinates on a navigation chart.

“This helps you to move a long and well-planned distance while patrolling,” he says. “I can now operate a motorboat fully and detect engine failures, measure water depth and strength, use the radar to locate navigation obstacles, and many more.”

Charles Obwatum, the Deputy Commandant of the Immigration Training Academy built by IOM in 2017 with funding from Japan, is optimistic that the training will help Uganda manage its border challenges.

“The issue of smuggling, issues of trafficking across the waters… this training is [critically] important for us and the Directorate of Citizenship and Immigration Control,” he says.

According to the 2020 Annual Crime Report from the Uganda Police Force, more than 600 people were victims of Trafficking in Persons. Of these, some 497 were victims of transnational trafficking, with traffickers mostly taking advantage of borders in south-western Uganda to end up in Tanzania and Burundi, and borders in Eastern Uganda to reach Kenya. Young women and girls are trafficked the most.

IOM Uganda’s Immigration Border Management project manager, Olivier Baguma, says the  specialized maritime training sessions clearly illustrate IOM’s goal of contributing to safe, humane and orderly migration – and of improving the implementation of the United Nations Trafficking in Persons Protocol and Smuggling of Migrants Protocol.  Not only in Uganda, but across the globe, secure borders create an enabling environment to help voluntary and involuntary immigrants.

With funding from Japan and other donors, particularly the Government of the United States of America, IOM has consistently supported the Uganda Government on border management during the past seven years.  Key achievements include the building of the Immigration Training Academy, provision of vehicles and other equipment, and staff training, as well as the installation of border management information systems. 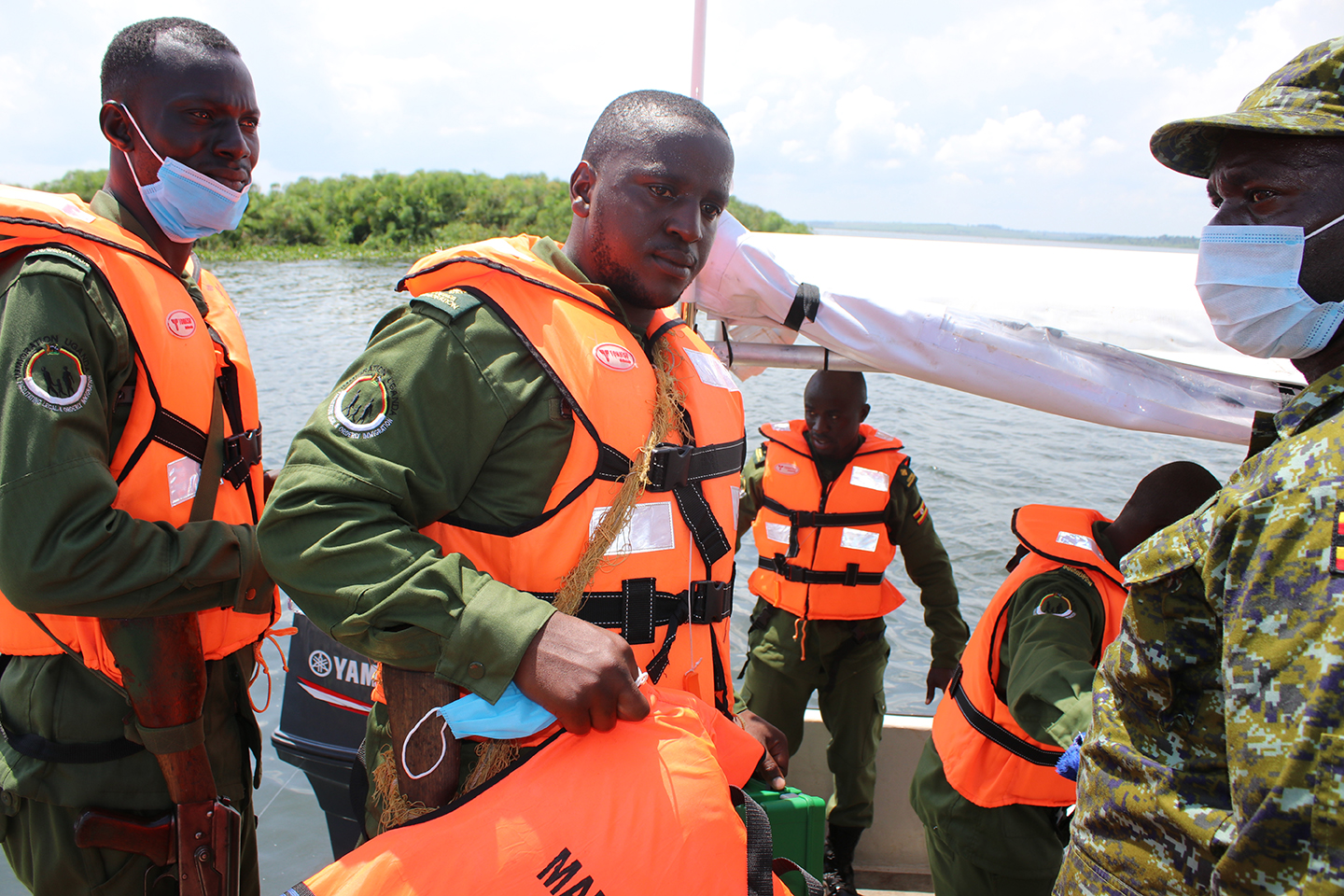 Edward Nayebare inspects his team before leading them on a patrol on Lake Victoria. Photo: IOM/Innocent Vuga