Nasra suffered from distance, pressure, racism and injustice in a context she thought was safe. In her migratory journey, she was a victim of trafficking. Photo: Sibylle Desjardins / IOM

Meet Mariam, a Returnee Back on Track After a Nightmare Ordeal

Conakry – As a teenager, Mariam Conté’s dream of going to school in France led her down a road to hell.

“I wanted to go to France to continue my education, but I failed to secure the required resources and support,” she says. “I couldn’t make the journey through regular channels so friends proposed we travel through Libya. We sold an uncle’s vehicle to pay XOF 1,000,000 (EUR 1,500) to a Burkinabé smuggler.”

Life then took a grim turn. Mariam travelled through Algeria and Libya, where she was sequestered under harsh and humiliating conditions. She was trafficked, primarily for prostitution and sexual slavery.

“I asked the lady what it would take to get me out of this hell. She told me to call my parents to pay a ransom. On the phone with my mother, they beat me with a barbed whip. The next day, my parents sent XOF 600,000 to my kidnappers,” she says.

Recently graduated with a law degree, Mariam, 22, says she has been able to build a future in Guinea after returning in 2017 thanks to the reintegration assistance she received through the EU-IOM Joint Initiative for Migrant Protection and Reintegration, funded by the European Union Emergency Trust Fund for Africa.

Her situation now is far removed from that nightmare chapter that began in 2016. After being released by her kidnappers, she continued her journey and hoped to reach Europe through Libya. But she did not know she was pregnant.

“A Libyan woman I met told me and advised me to wait until I gave birth before continuing my trip,” says Mariam. “Four months later, in a stampede, I had a shock that precipitated my delivery of a baby boy. They told me I got a stillborn baby, but I don’t know whether that’s true or not,” she says.

Psychologically and physically exhausted, and short of money, Mariam contacted her brother-in-law in Guinea who helped finance her return. But a car driver left her in the desert; Mariam lost consciousness and ended up in a hospital in Libya, thanks to help from a French Army patrol.

In hospital she met the Guinean Ambassador who told her about the International Organization for Migration´s (IOM) assisted voluntary return programme.

Back in Guinea, Mariam faced daily stigma and rejection in her community, including her family who considered her return a “failure”. 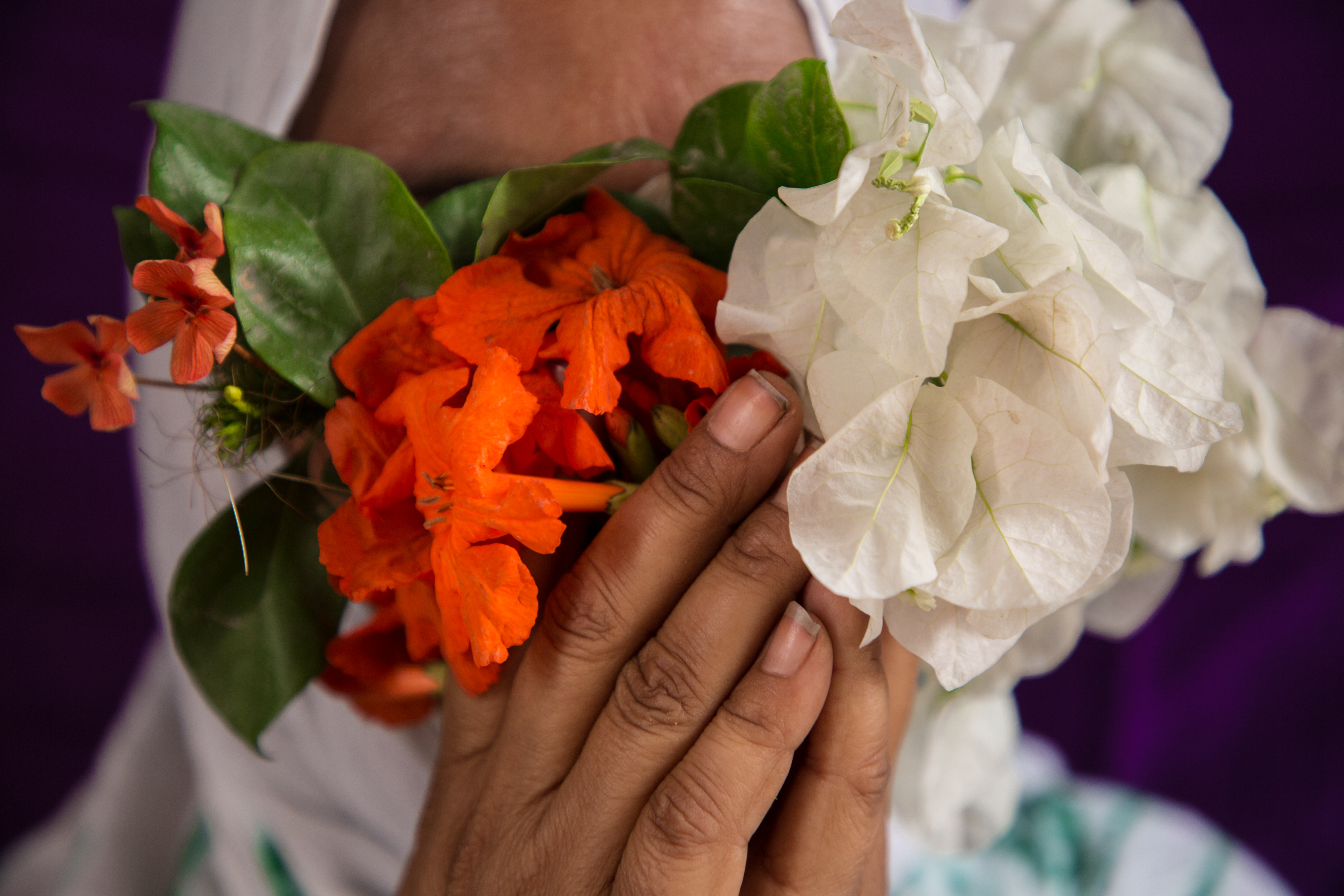 For two years, Khadijetou, a victim of trafficking, was exploited, tortured, deprived of his income and his family. Her face and body bear traces of daily abuse. Photo: Sibylle Desjardins / IOM

“When I came back, I was constantly scared and isolated because of the way my family and friends behaved toward me, calling me names like ‘leftover of the Arabs, loose woman, shame’,” says Mariam.

To face this ordeal, Mariam received psychosocial support from IOM. She still remembers the many sessions she attended.

“I had several sessions with IOM experts who listened to me, helped me rebuild trust, and got rid of this sense of failure that was killing me softly. It was this psychosocial support that enabled me to start anew, believe in myself, overcome my fears and share my experience with others,” says Mariam.

“Under the MaM campaign, I have toured 137 neighbourhoods in Conakry to spread a message of awareness. I participate in TV and radio shows to share my experience. I also produce videos and post them on social media. I have been able to regain respect and trust of my loved ones through all of these activities,” she says.

She decided to pursue her law studies as part of her reintegration. “I chose the resumption of my university education as my reintegration project. That’s how IOM paid for my tuition, and they also provided me with a laptop to support my learning and research activities,” she says.

Today, Mariam dreams of joining IOM to continue to assist survivors of trafficking in persons.

“After I graduated, I went to see the IOM Chief of Mission who has been very supportive since I returned. I told her I wanted to do an internship with IOM Protection Unit to assist individuals in vulnerable situations. She encouraged me to apply, which I immediately did. If I am where I am today, it is because of the psychosocial support that has been provided to me, so I want in turn to bring it to others, to listen to them,” she said.

Since 2017, more than 15,000 Guineans have received support through assisted voluntary return and reintegration activities under the EU-IOM Joint Initiative for Migrant Protection and Reintegration.

This article was written by IOM Country Office in Guinea and edited by the IOM Regional Office in Dakar.