Republic of Moldova: The Long Road to Safety 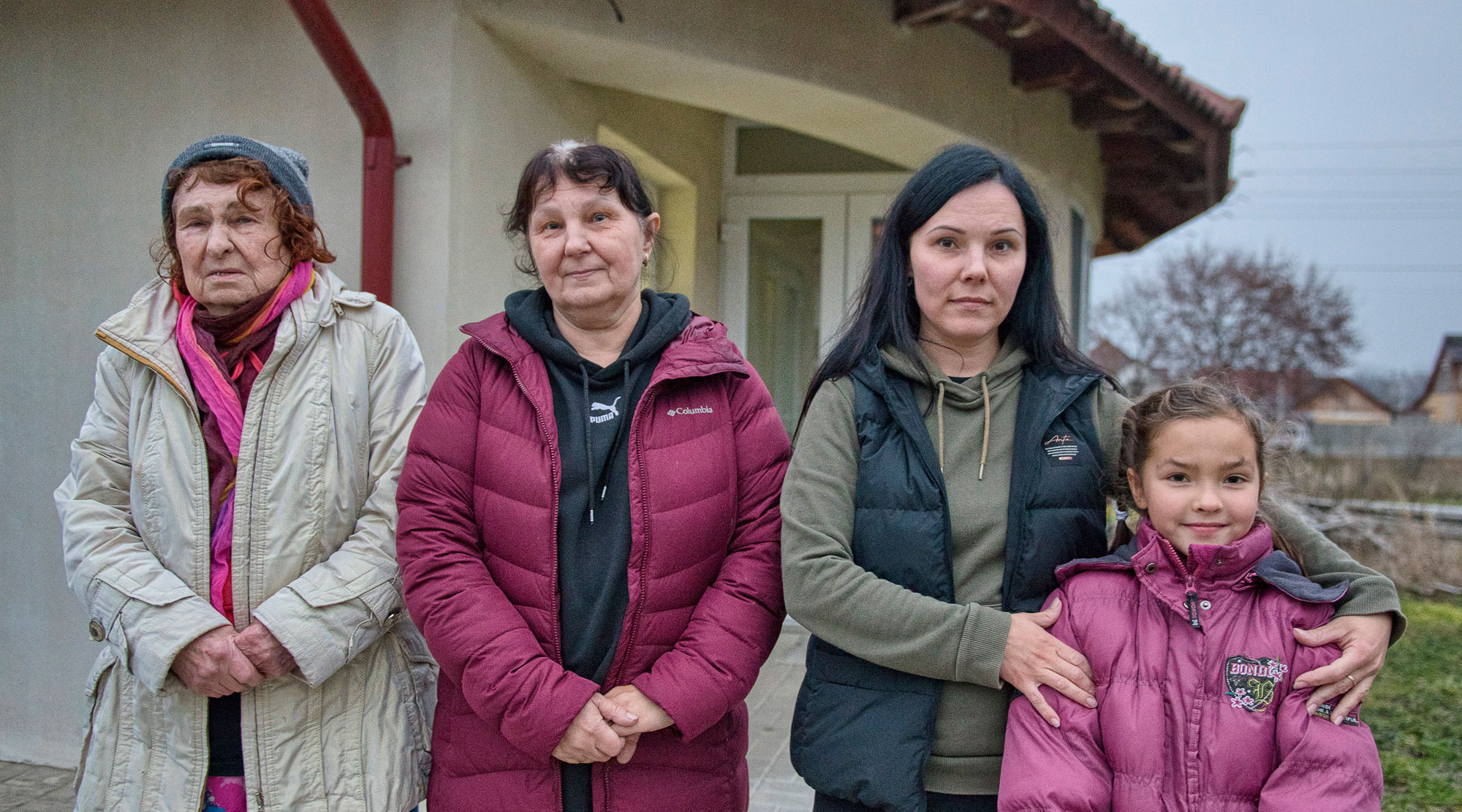 Svitlana Nikitina, 60, second from left with her mother, one of her daughters and granddaughter outside their rented house near Chisinau. They fled Odesa at the start of the conflict and are determined to make a new life in Moldova. Photo: Victor Lacken/Lensman.eu

Palanca/Chisinau, 23 January 2023 – The road from the Ukrainian border with the Republic of Moldova spools out like a grey string among dull brown hills, ragged bushes, sad trees, watched over by a slate-grey sky which pushes out occasional snow flurries into the freezing fog.

But this flat, silent, heath means safety. It means hope. It means a pause to the constant barrage of artillery, the whine of sirens and drones, the rush for the bunker, the dark, the cold, the smell and the grime of war. The terror can be set aside, and life can start again.

Larysa has just got off a bus that took her from the border to the International Organization for Migration’s (IOM) bus station outside the small town of Palanca. Three days ago she left the Donetsk region, and criss-crossed the vastness of Ukraine, first to Lviv on the Polish border then back east and south, searching for a way out. A 2,000-kilometre, three-day journey with her sick daughter.

She’s already planning what happens next, this streetwise market trader. Her conversation, like all those who have just left the hell of war, comes in ebbs and flows, torrents then silences, stifled tears and too raw memories. Disbelief. Relief.

Now comes a ten-hour bus-ride to Bucharest, down those windy Moldovan roads to a new life, the dread in her throat receding as night falls and the kilometres tick by.

“When I get to Bucharest I want to apply for a job, find work, accommodation,” she says. “The most important thing is that there is no shooting there. That it’s peaceful, and your child goes to bed without saying, ‘mama will we wake up tomorrow’?” 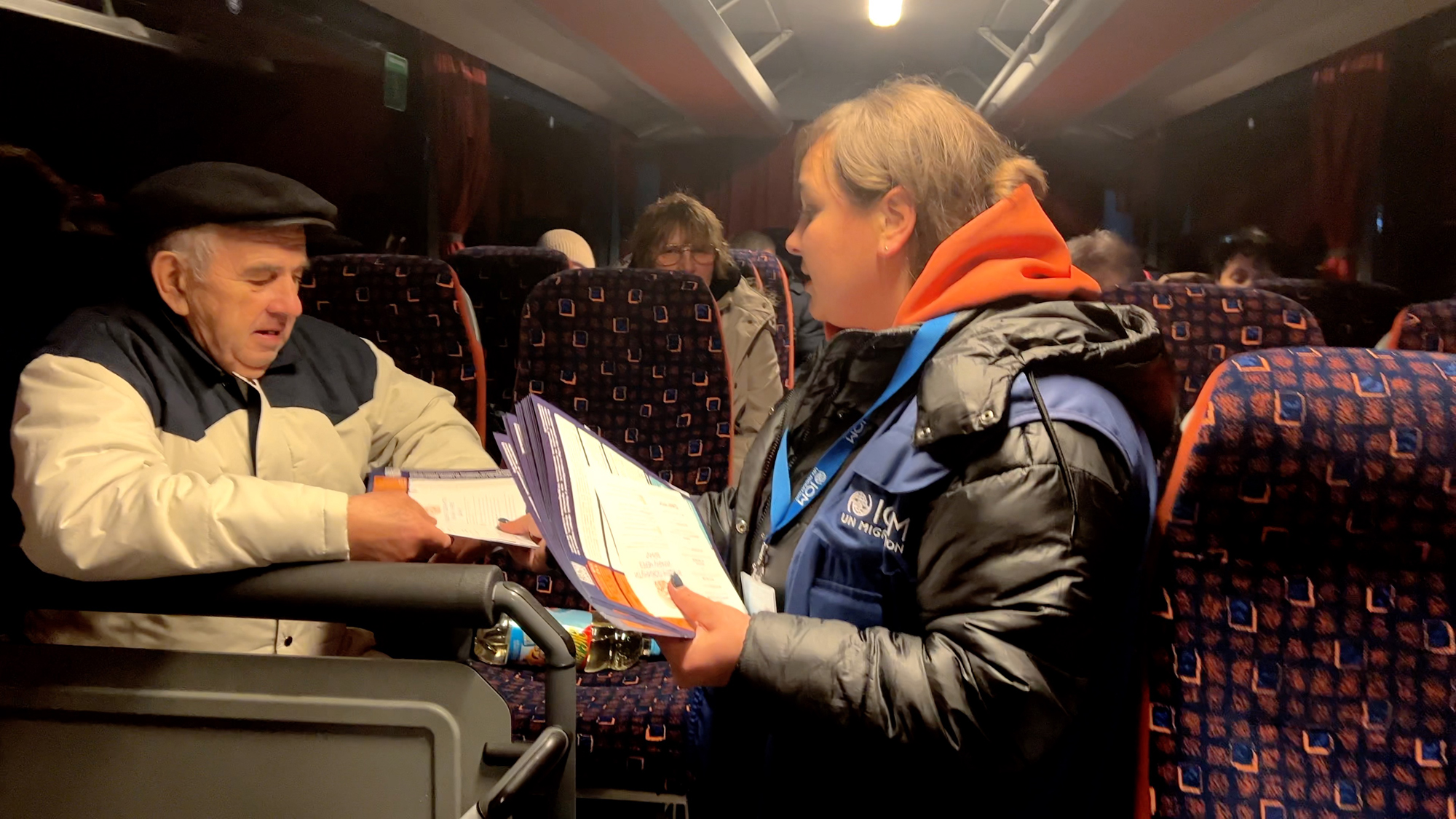 After a hot meal and free medical checks, those fleeing the fighting in Ukraine travel on by bus to Romania. On the way, they receive practical information, food and blankets from IOM staff. Photo: Victor Lacken/Lensman.eu

Larysa and her daughter are two of a few dozen people sitting around a tent staffed by IOM and other agencies. Before the bus leaves there’s time for a hot meal, time to get information they will need for the coming days and weeks, a health check-up and even a hot shower.

“When we first came here in late February, immediately after the Russian invasion, there was total chaos on the border,” remembers Lars Johan Lonnback, IOM’s Chief of Mission in Moldova. “It was immediately clear to us that – along with food, shelter, medical care and counselling – transport was a massive need. Well-meaning volunteers were arriving, offering to take vulnerable families – who, you have to remember, left their men behind to fight – to Portugal, Norway, Italy. It was totally unorganized and a dream scenario for human traffickers, who always turn up when people are at their most vulnerable.”

It was also abundantly clear to Lonnback that the thousands of people coming across the border would place a massive strain on Moldova’s scarce resources, and quickly cause a social crisis. IOM, partnering with the Moldovan authorities and the UN Refugee Agency, quickly established a dedicated bus service which decongested the border area, protected the vulnerable, and added a full raft of additional services to the massive relief effort.

IOM also helps people, particularly the ones mostly in need (bedridden, handicapped, elderly) to get to the European Union (EU) countries by plane. All told, some 15,000 people have entered the EU by bus and plane with IOM support, which Lonnback believes has helped to stave off a very difficult situation in a country already wracked by poverty and social tensions. 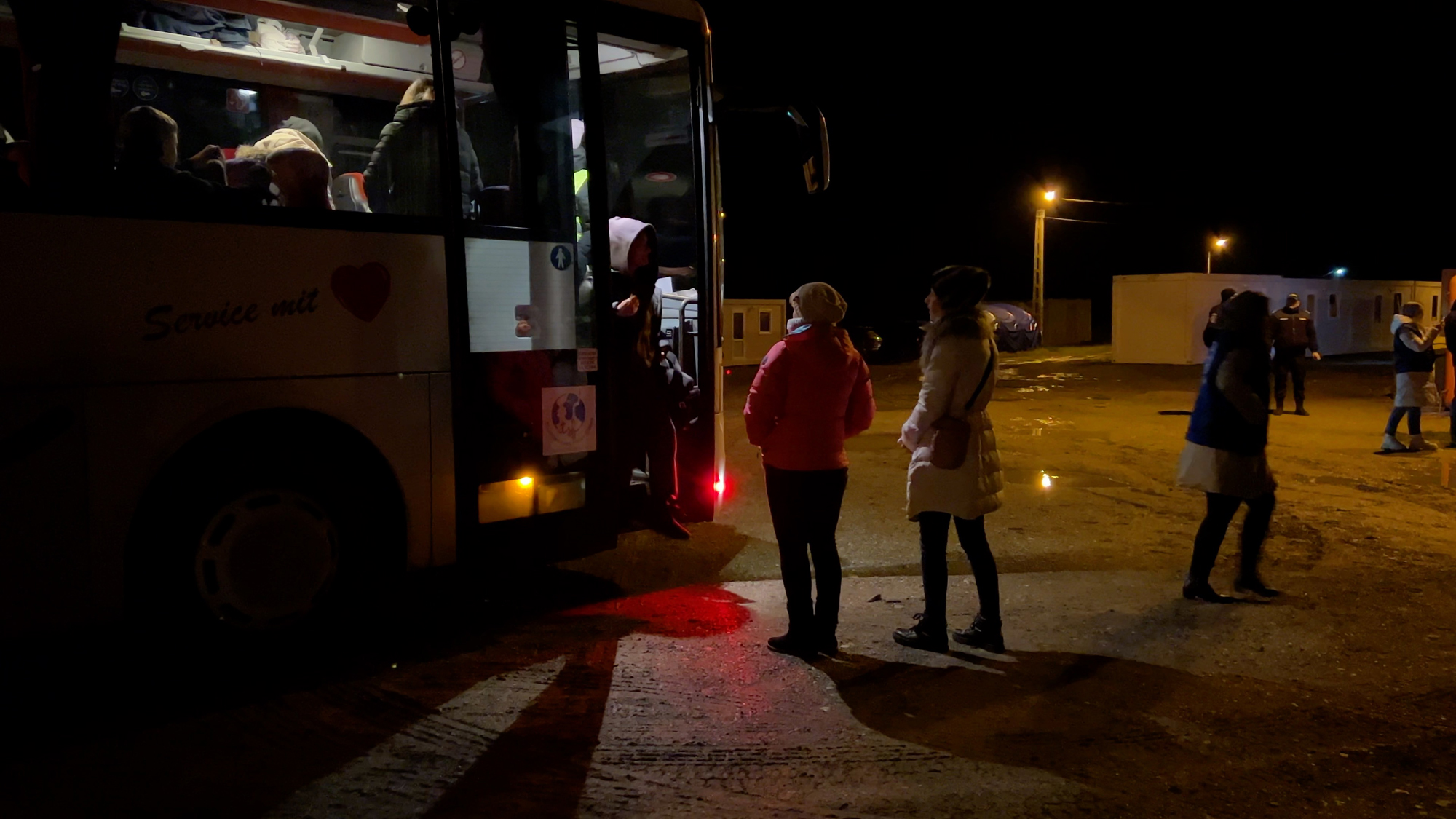 A group of people who left Ukraine early the same day arrive at a waystation in Husi Romania, en route to the capital Bucharest. Photo: Victor Lacken/Lensman.eu

“The critical thing is that the international community continues to help Moldova in any way it can,” he says. “We’ve seen that the Ukrainians are proud and resilient, and they really don’t want to leave their homes. But as the attacks on infrastructure mount, and as the snow piles up, it gets more and more difficult to live, to simply exist. We have established a system that is flexible and responsive, and we can scale up in the event of large numbers of people once again fleeing Ukraine.”

It’s reckoned that up to 800,000 people have fled the war in Ukraine via Moldova, with about ten per cent of them deciding to stay in the country. Many of these are from cities like Odesa, just 40 kilometres from the border, or they have family and friends in Moldova, or, like people in any war, they don’t want to be too far from their home place.

People like Svitlana, a 60-year-old real estate agent from Odesa, who is now the mainstay for four generations of women living in a small house about an hour outside Chisinau. She speaks slowly, sometimes mechanically, sometimes almost inaudibly, describing the horrors she saw and heard. Her mother quietly reads as her daughter prepares borscht and her granddaughter sketches.

But she doesn’t cry. One suspects the tears are all dried up, or sobbed silently into a pillow in the dead of night. Svitlana gives the impression that sorrow is something she must not, will not, make time for. Her husband and sons-in-law are at the frontline, and it’s her task to lead the family, alone.

Moldova has welcomed them warmly, she says, with humanitarian aid and simple kindness. She and her daughter are learning Romanian so they can compete on the local job market, use their skills for the benefit of their host country and themselves. Much as they appreciate the aid they have been given, they don’t want to survive on it. 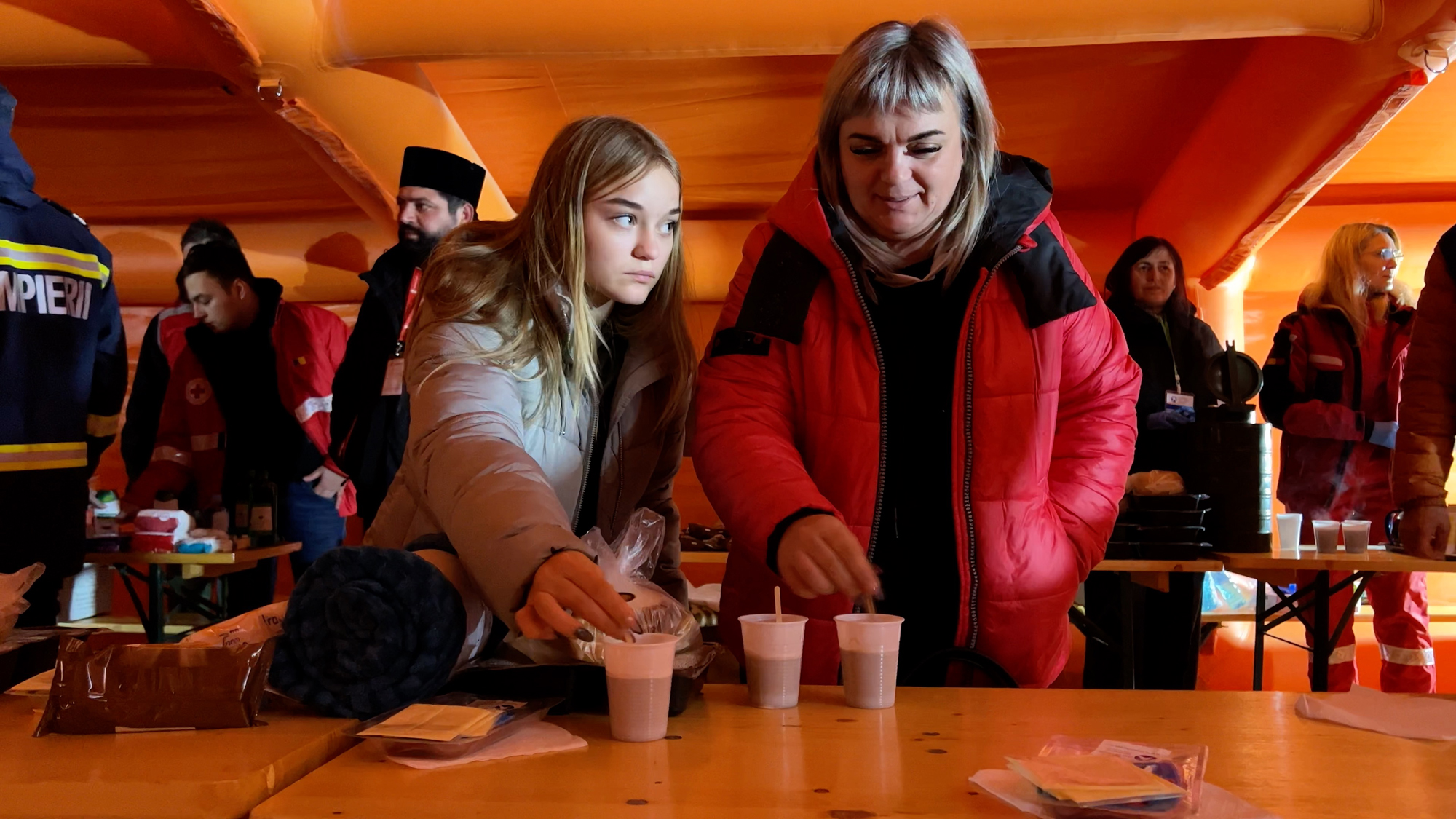 Larysa Kirilenko from Donetsk and her daughter take a snack on at the waystation en route to Bucharest. Photo: Victor Lacken/Lensman.eu

“It’s sustainability through solidarity,” says Margo Baars, IOM’s Emergency Coordinator in Moldova, describing IOM’s approach. “We provide livelihood support, grants for small businesses, training and transitional shelter support, particularly to get people through this difficult winter. One of the main things we do is psychological support, because people have been through a lot and need more than just material aid.”

Leaving Ukraine along with the mothers, the young children and the grandmothers, are the old men. The young men stay to fight. Yurii, 73, vividly remembers his parents talking about the second world war, and never thought that he would see such death and destruction in his homeland. “It’s horrible,” he says. “Every day we have victims being brought in. Every day. There are so many victims, so much grief, so many people suffered.”

Ivan, five months old, is wrapped up like the precious parcel he is. Conceived in peace, born into war. A few months back, heavily pregnant, his mother Ksenia ran through a minefield as cluster bombs rained down. She fell, but escaped. And where she fell, on Ivan, is a birthmark. A forever memory of the day his mother and he cheated death.

“I want this war to end so I can enjoy motherhood to the fullest,” says Ksenia. “I think I would have gone crazy with this war without Ivan. He’s the one who brightened up all the horror.”

And in this colourless place, in this cold, miserable field, her smile is a shaft of sunlight.

This story was written by Joe Lowry, Senior Media and Communication Officer for IOM Regional Office in Vienna, jlowry@iom.int.