with Disabilities in Cox’s Bazar

Anuara was born with a congenital limb defect but goes to great lengths to overcome her daily struggles. Photo: IOM/Monica Chiriac

Twenty-six-year-old Anuara was born with a congenital limb defect. However, this does not stop the single mother from doing her household chores, getting around the camp and looking after her two-year-old. “I have been using my hands to walk my entire life,” Anaura explains. Yet, since the onset of COVID-19, she is increasingly relying on her neighbours for errands.

Anaura is one of the 59 Rohingya refugees with disabilities who will receive assistive devices in the coming weeks. “I hope the wheelchair will be the right height for me, so I can get into the seat by myself,” she says. Most of the people with disabilities living in the camps have been disabled their entire lives, but have never owned an assistive device to facilitate their daily tasks.

According to a recent assessment conducted by the Age and Disability Working Group (ADWG) and the Protection Working Group (PWG) of the Humanitarian Country Team in Cox’s Bazar, of which the International Organization for Migration (IOM) is a member, almost half of the persons with disabilities living in the camps do not own assistive devices or have access to rehabilitation services.

Rohingya refugees need more support to obtain meaningful access to basic services. IOM mainstreams its assistance for people with disabilities across all programmes to ensure vulnerable individuals receive appropriate support, referrals, care and individualized treatment based on their needs. 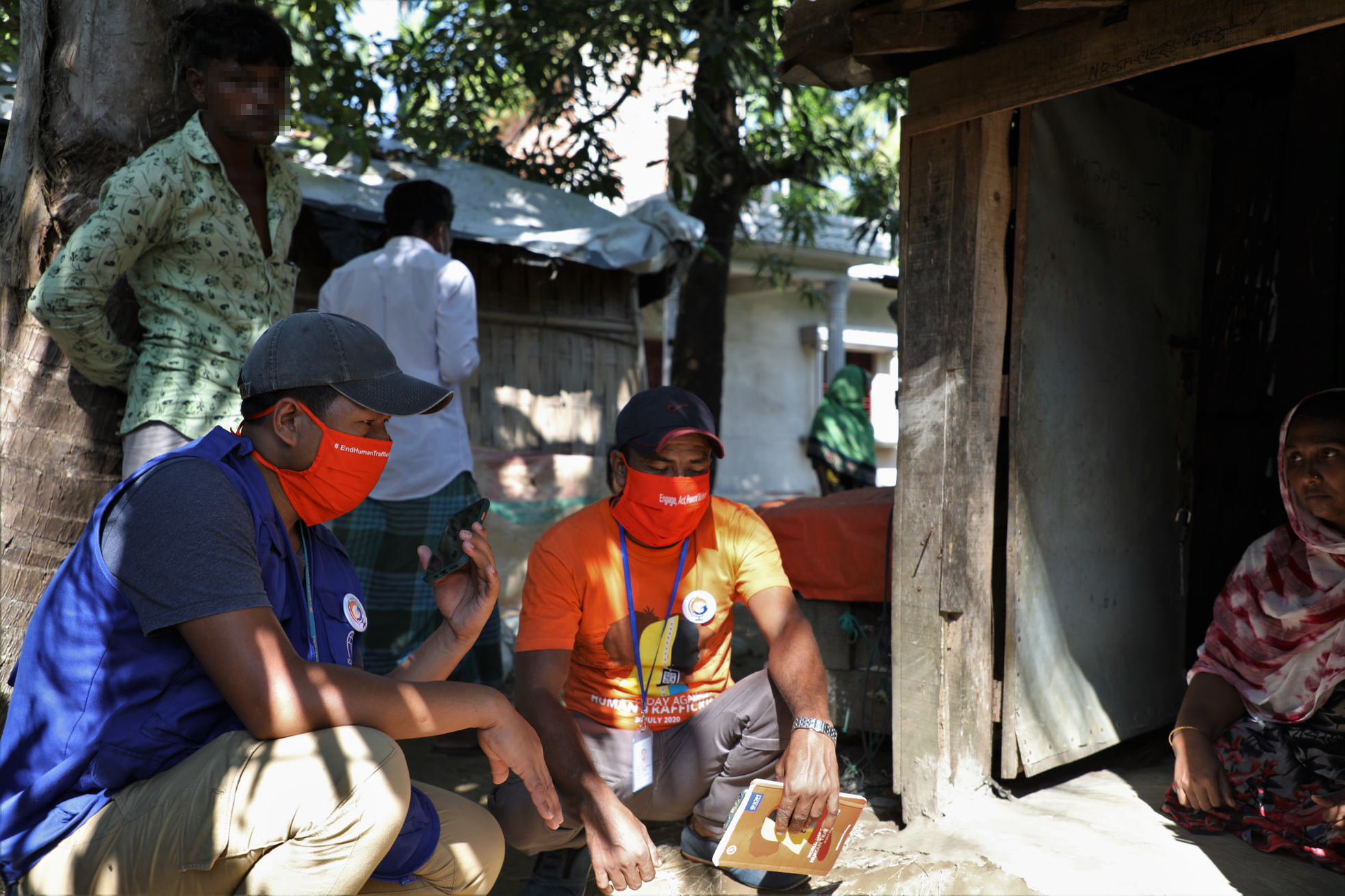 IOM teams regularly visit those with disabilities to ensure their needs are being met. Photo: IOM/Monica Chiriac

Mobility restrictions related to COVID-19 increased concerns over the protection of those most vulnerable, while challenging living conditions with access and mobility limitations have been exacerbated for the elderly, as Mabia, 73, can attest.

Along with eyesight challenges, Mabia also has terrible back pain which makes it hard for her to lie down. She currently sleeps on a mat on the floor, under the same roof with four of her relatives. One of them is Amin, her 24-year-old grandson, who, three years ago, carried his grandmother on his back for three days straight, as they fled conflict in Myanmar and took refuge in Bangladesh.

“I see her suffering and it pains me,” Amin says. Mabia will soon receive prescription glasses and a medical air mattress, which they hope will alleviate some of her back pain.  Last year, a total of 132 Rohingya refugees with disabilities in Teknaf camps received assistive devices, through IOM’s partnership with the Christian Blind Mission (CBM) and the Centre for Disability in Development (CDD), who lent their technical expertise, assessing the needs, providing tutorials about usage and maintenance, and conducting follow-up visits. 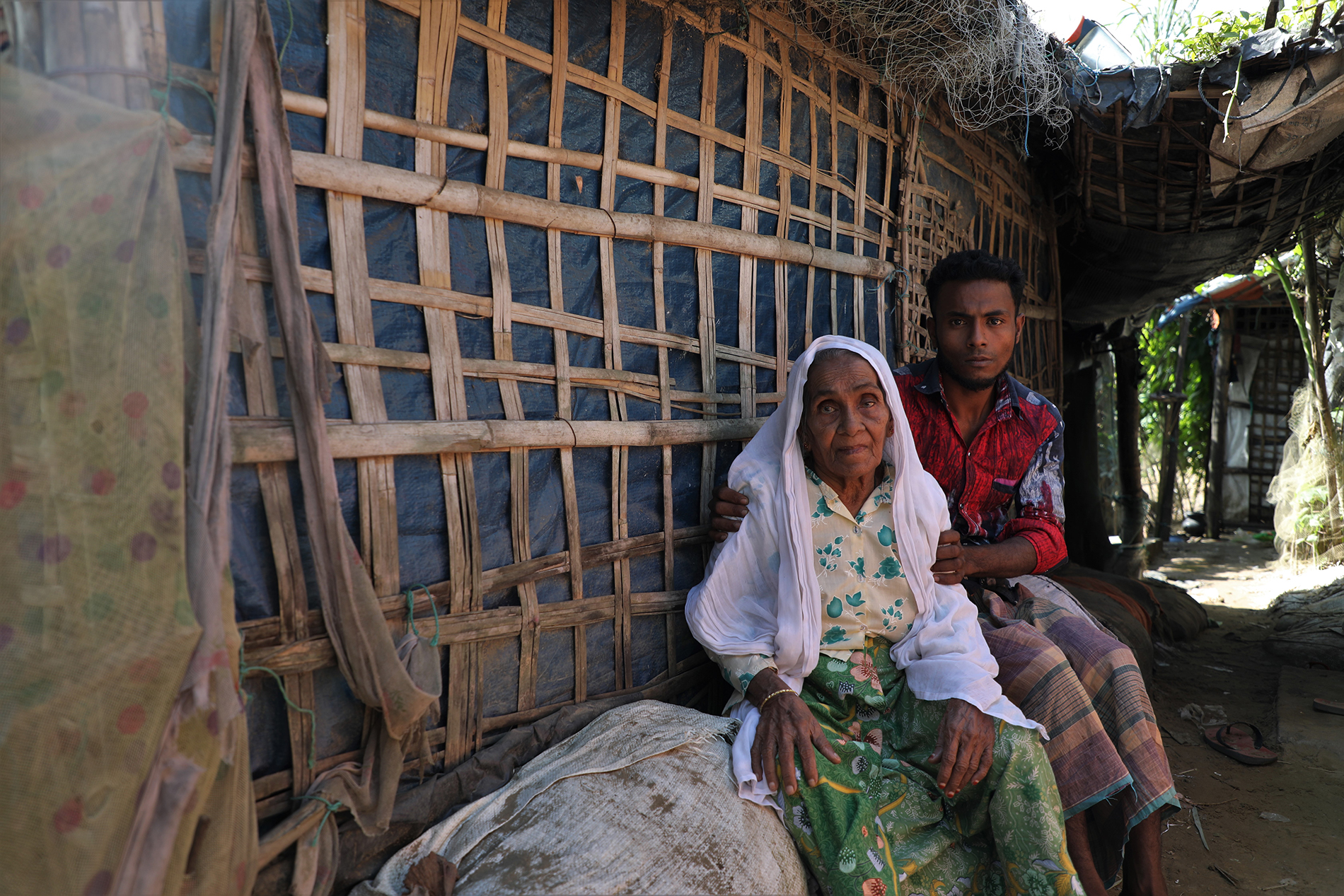 Back in 2017, Amin carried his grandmother from Myanmar to Bangladesh on a three-day journey on foot. Photo: IOM/Monica Chiriac

In Cox’s Bazar camps, there is insufficient Water, Sanitation and Hygiene (WASH) infrastructure to cover the needs of the community, particularly the specific needs of those most vulnerable, such as women, girls, the elderly and persons with disabilities. With that in mind, IOM’s WASH team and partners regularly upgrade existing latrines and build new ones, depending on the needs of persons with disabilities that reside in the vicinity of the structures.

Building upon previous experience, IOM continues to foster community participation for persons with disabilities, and ensures they have proper access to latrines, food distribution points, health services, and safe pathways in their priority spaces. 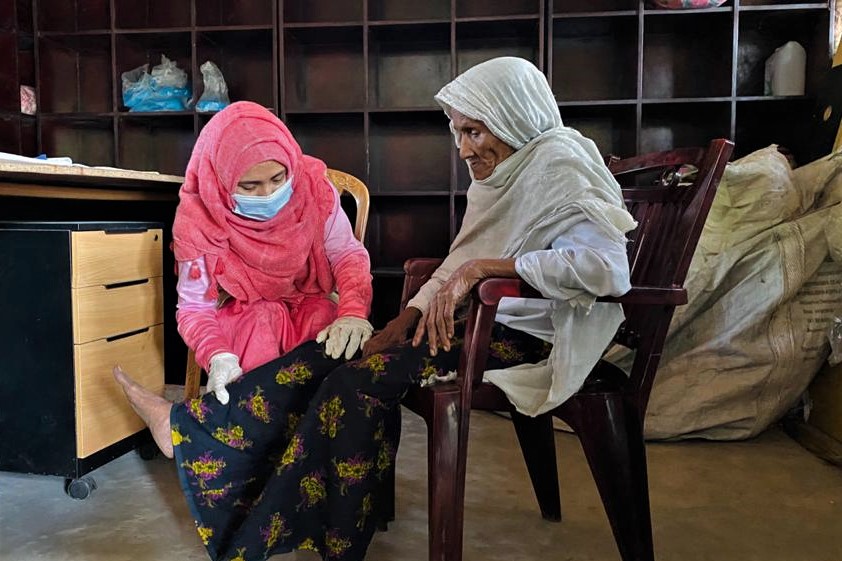 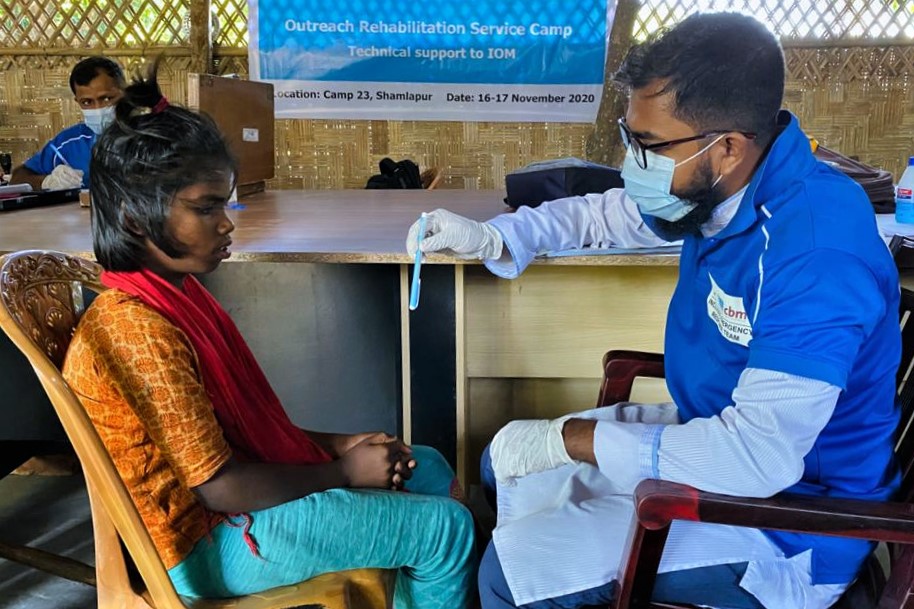 Twelve-year-old Nur rarely leaves her house due to her poor sight. When it gets dark, she cannot see at all. The few times she does leave her house, she is assisted by her two younger brothers, aged 8 and 10. Her teacher sometimes visits her at home to help her keep up with the school curriculum, but Nur wants to attend classes at school and play with kids her age.

“A pair of prescription glasses would make a world of difference,” her mother, Anaura, says.

A total of 75 people, between 2 and 100 years old, attended the screening throughout November. Whilst 59 were selected to receive assistive devices, the remainder were referred to health partners for more suitable supports ranging from physiotherapy to cataract surgery. The persons in need of assistive devices will receive wheelchairs, glasses, walking sticks and hearing aids.

IOM teams and partners provide health services to people with disabilities on a regular basis. Health care staff are trained to identify various forms of physical or mental disabilities and to offer consultation services at health facilities. 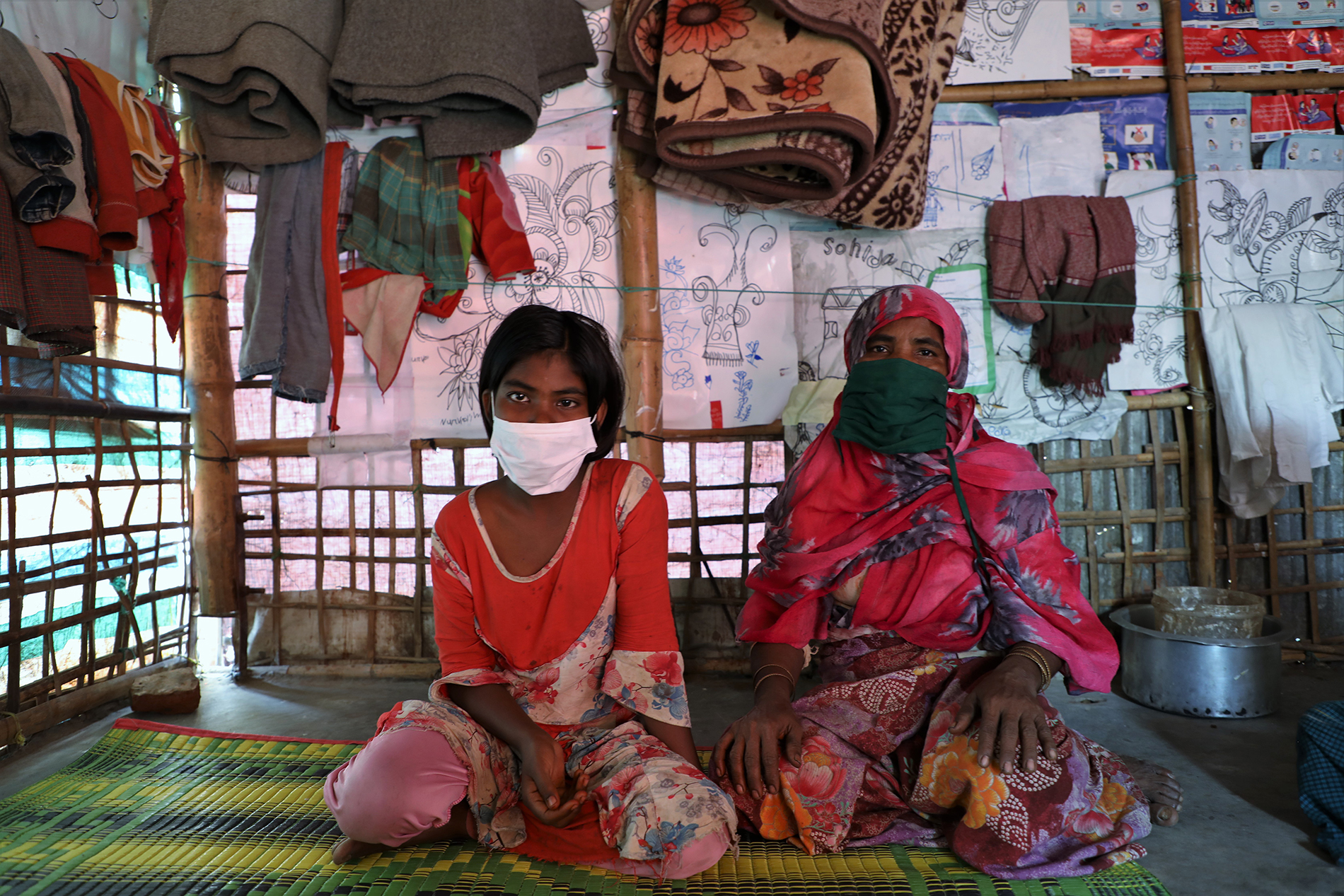 Abdulsalam, 70, and his wife have been living in the camps in Cox’s Bazar for over 25 years, as far as they can remember. Shortly after they had their third daughter, Abdulsalam’s hearing started to diminish. Nowadays, he can barely hear at all, and since the onset of COVID-19 and use of masks, he has had a hard time reading lips and figuring out what people are trying to say.

The refugee population currently residing in Cox’s Bazar has a diverse demography, which is the corner stone of social cohesion and conflict resolution among communities. The elders, like Abdusalam, play a key role in social dynamics, and with their support, IOM promotes and strengthens community participation and communication among refugees and host communities

“He doesn’t hear the call to prayer and can’t participate in any of the community discussions,” his wife, Rehema, says. “He feels left out.” Until he receives his hearing aid, Abdulsalam relies on his wife to support and interpret for him.

The much-anticipated devices will arrive in the camps and be distributed to those in need later this month, with technical support from CBM. An orientation session explaining how to use and care for the devices will be organized by partners, especially for those receiving a wheelchair.

This year, IOM’s office in Cox’s Bazar proudly signed a memorandum of understanding (MoU) with CBM. “When resources are shrinking and rehabilitation service providers are not able to serve all the camps, such initiatives are vital,” explained Vivekkumar Singh, Humanitarian Disability Inclusion Advisor at CBM and Interim Chair for the Age and Disability Working Group of the Humanitarian Country Team. 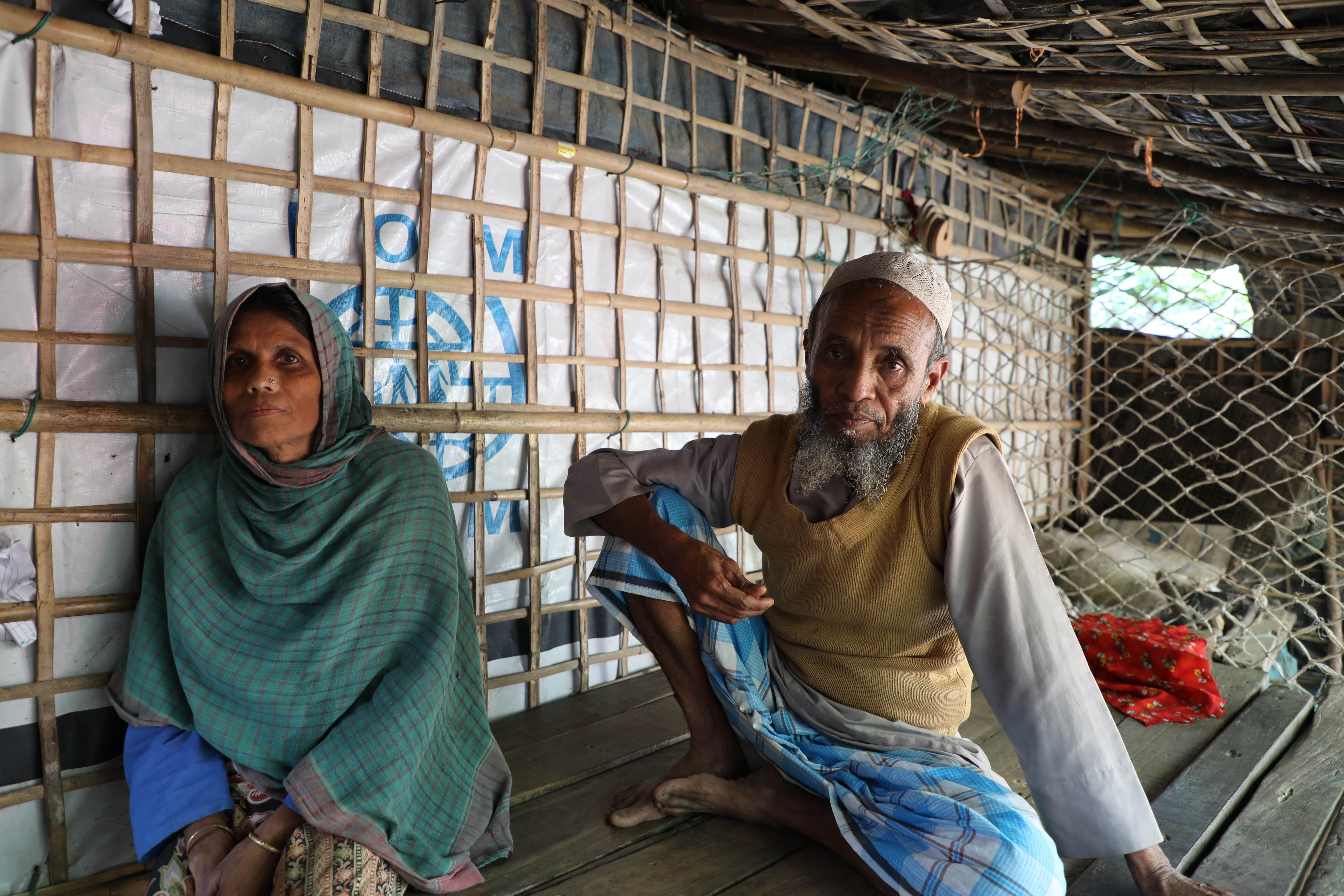 Abdulsalam hopes the hearing aid will help him be an active participant in community discussions. Photo: IOM/Monica Chiriac

When 12-year-old Jafor and his family fled Myanmar in 2017, his uncle had to carry him throughout the entire journey to Bangladesh. His mother only recalls he had a horrible fever when he was six, which left him with a mobility problem in his left leg. As his sight progressively got worse, they eventually realized that his left eye had also been affected.

Restoring dignity and protection for all the refugees requires understanding their needs on an individual level. The traumas of the past are regularly addressed by IOM’s Mental Health and Psychosocial Support programme, which continues to invest in outreach and clinical support for the entire refugee population.

Jafor feels like he doesn’t fit in. Kids are sometimes mean to him at school, and the route from his house to his school takes him 30 minutes, when it should only be 10. Jafor is convinced that his new walking stick and glasses will help him regain his independence. During his eye exam, Jafor could see clearly for the first time in years. This gave him hope that his mother would soon not need to read out his lessons for him anymore.

“I just want to feel normal and to be able to do what everyone else does,” he explains. 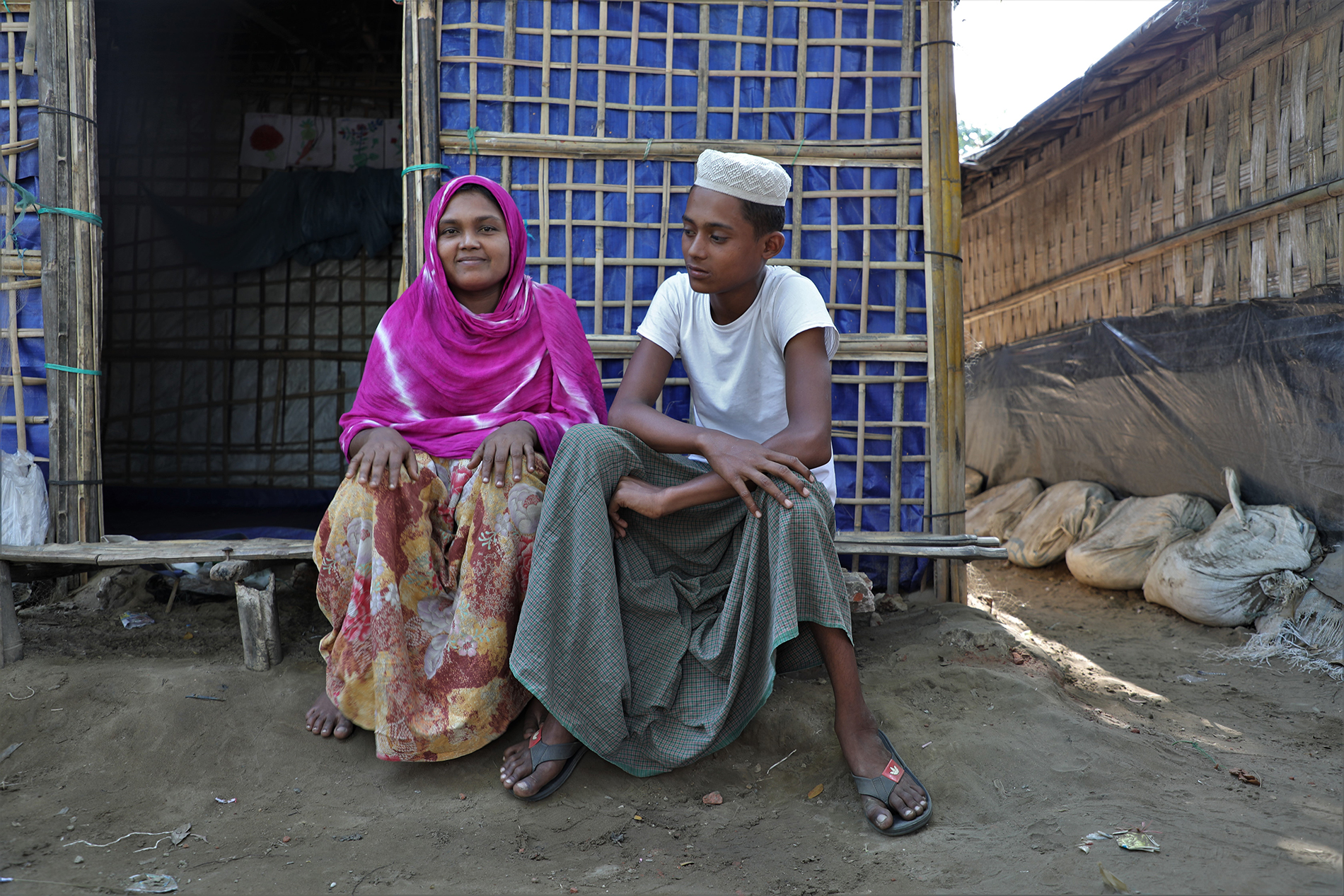 Jafor’s mother, Gulbanu, currently has to read out the lessons for her son. Photo: IOM/Monica Chiriac

For this year’s International Day of Persons with Disabilities (IDPD), IOM reaffirms its commitment to ensure that those most vulnerable can access all types of humanitarian services, and continues to modify its humanitarian programming to make it more inclusive.

IOM’s assistance for people with disabilities in Cox’s Bazar is possible thanks to the support of the European Civil Protection and Humanitarian Aid Operations (ECHO), Australia’s Department of Foreign Affairs and Trade (DFAT), and the US Bureau of Population, Refugees,and Migration (PRM).