Long-term conflict and natural hazards have forced 2,6 million Somalis to leave their homes and settle in IDP sites where they rely on humanitarian services due to a lack of livelihoods. Moreover, many are at risk of eviction putting further stress on their situation. Here an internally displaced family in Baidoa before being relocated to a new public site for IDPs developed by IOM and partners last year. Photo: IOM 2019

New Hotline Provides a Lifeline to Families Displaced in Somalia

Mogadishu – As COVID-19 continues to affect the livelihoods and health of billions of people around the world, communities in Somalia are grappling with the pandemic while facing an added burden of a deepening humanitarian crisis.

Recent flash flooding and the worst locust invasion in a decade have left many families without access to basic health services, clean water, shelter, and regular food supplies. Approximately two million people grappling with poor housing conditions, many of whom are displaced and remain vulnerable to recurrent climate shocks and eviction.

“Somalia has one of the largest internally displaced populations (IDPs) in the world. Years of armed conflict and instability, coupled with an ongoing climate crisis in which extremely rainy periods are followed by severe droughts, have forced over 2.6 million people to seek refuge in other areas of the country,” said IOM’s Programme Manager, Maria Celeste Sanchez Bean.

Many displaced families must start their lives over again with little to nothing left, bringing with them only the belongings they can carry.

Madina’s family was one of those affected by conflict, drought and food insecurity in south-west Somalia. In April this year, they decided it was impossible to continue living in their small village. Madina walked for three days with her husband and seven children to a displacement site in Baidoa in search of protection and assistance.

"I was in a desperate situation, I did not know what to feed my children,” Madina said.

When they arrived to the site, Madina’s family built a small makeshift shelter covered with pieces of worn-out clothes. She then went to the information centre, run by the International Organization for Migration (IOM), to report her lack of food and poor shelter conditions.

The response was immediate and IOM and other partners provided the family with a more durable shelter and food to help them start their new life. 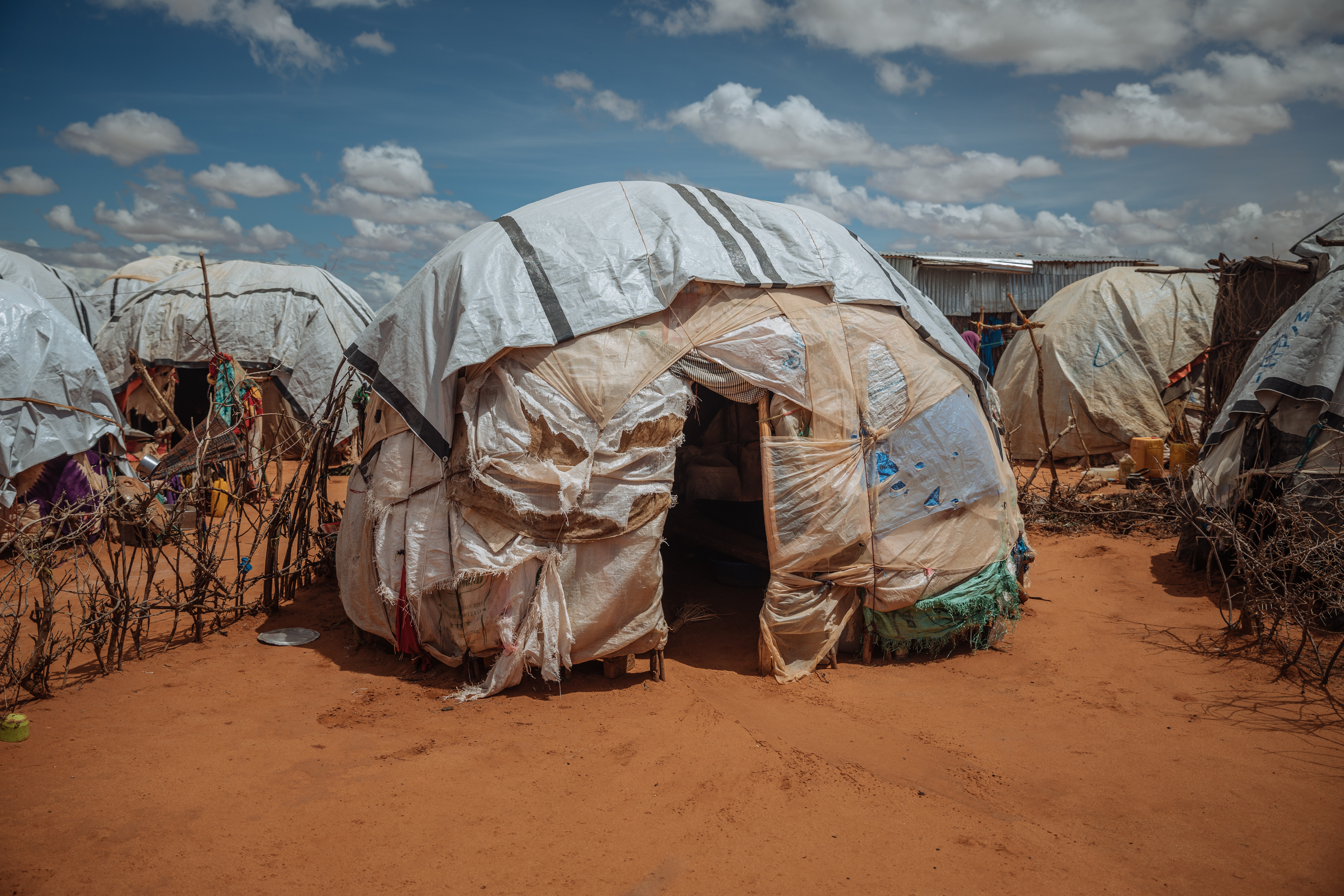 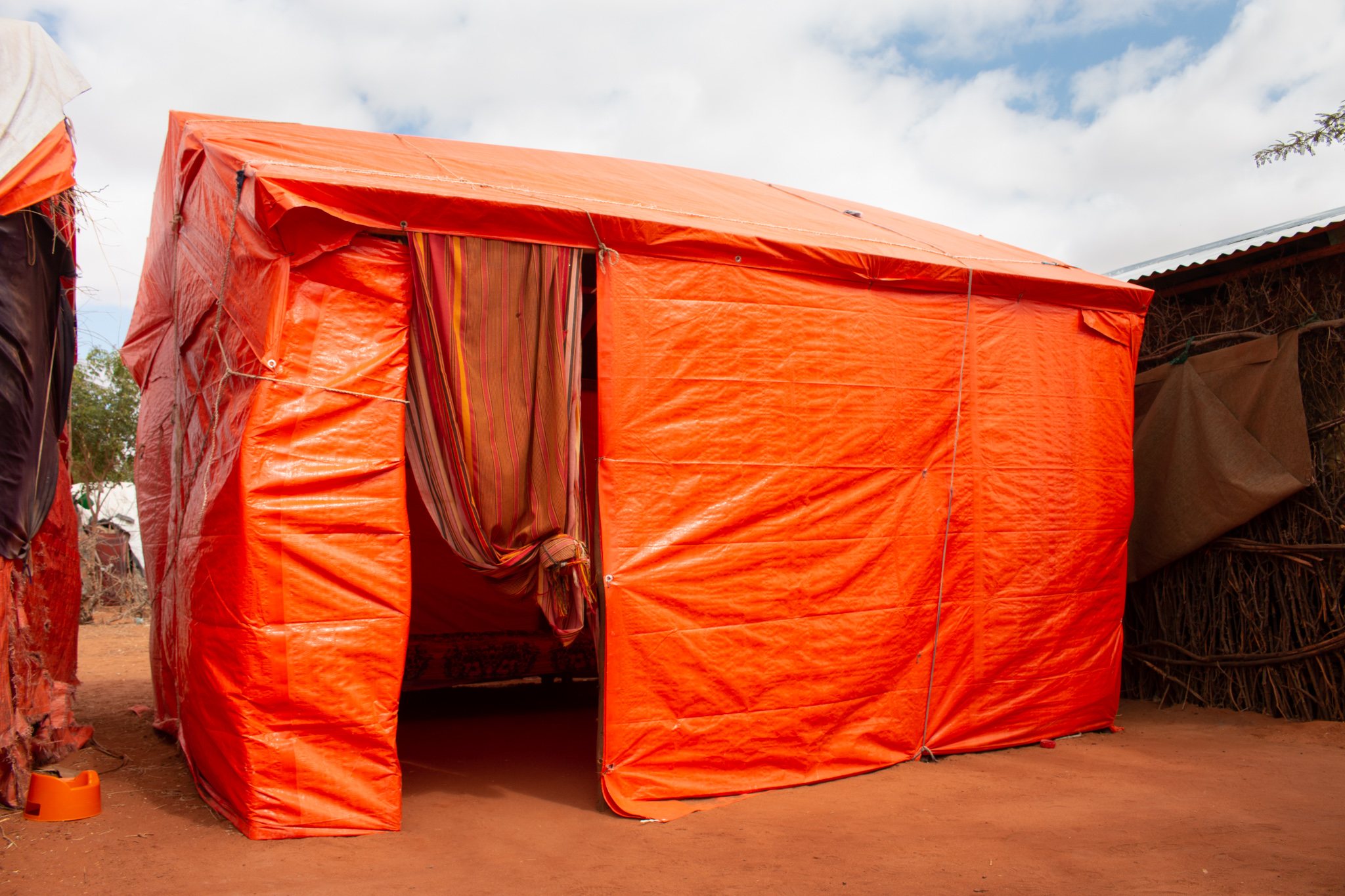 On the left a typical makeshift shelter known in Somalia as “buul”, on the right, a more durable shelter recently upgraded with support provided by IOM.

The response was immediate and IOM and other partners provided the family with a more durable shelter and food to help them start their new life.

When displaced individuals like Madina arrive to an IDP site, the first place where they seek help or information is at an information centre located within their settlement. IOM runs 14 information centres in major displacement sites in the cities of Doolow, Kismayo and Baidoa - which is home to the largest number of displaced populations in the country after the capital Mogadishu.

These centres have greatly improved the community’s access to information about services available from IOM and partners and have played a key role since the outbreak of the pandemic.

However, until recently the centres did not have adequate shade to protect people from the hot sun while they waited for assistance.

Last year, through cash-for-work programmes, members of the community were contracted to construct more comfortable waiting spaces with ventilation, seating and shade, as part of efforts to empower the community and build their skills.

“This is the first time in a year that I feel like a human being,” says Mohammad, who arrived in Doolow after fleeing conflict in his hometown. “Last year, my wife came carrying our baby but had to leave before she was assisted because of the hot sun.” 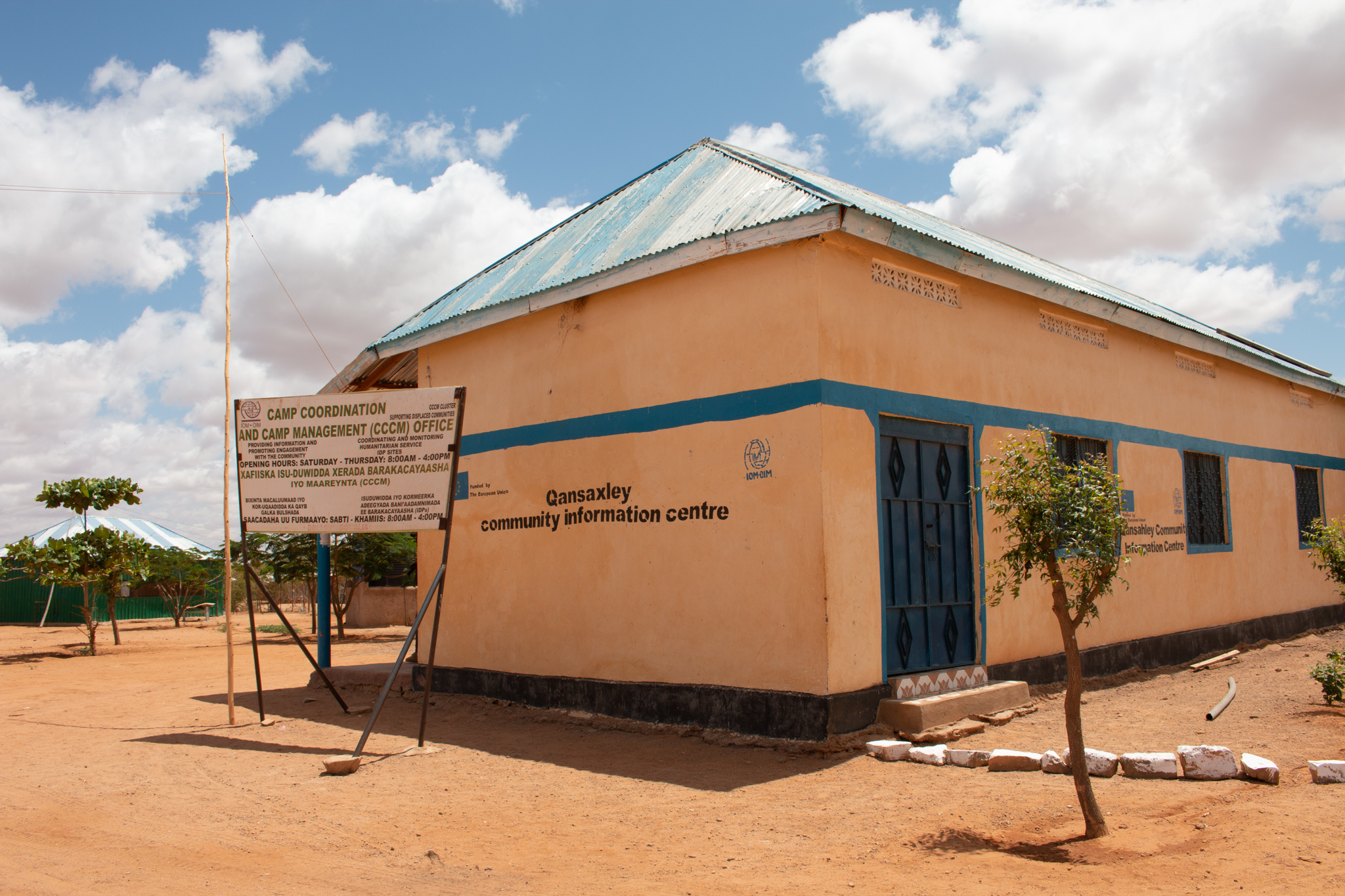 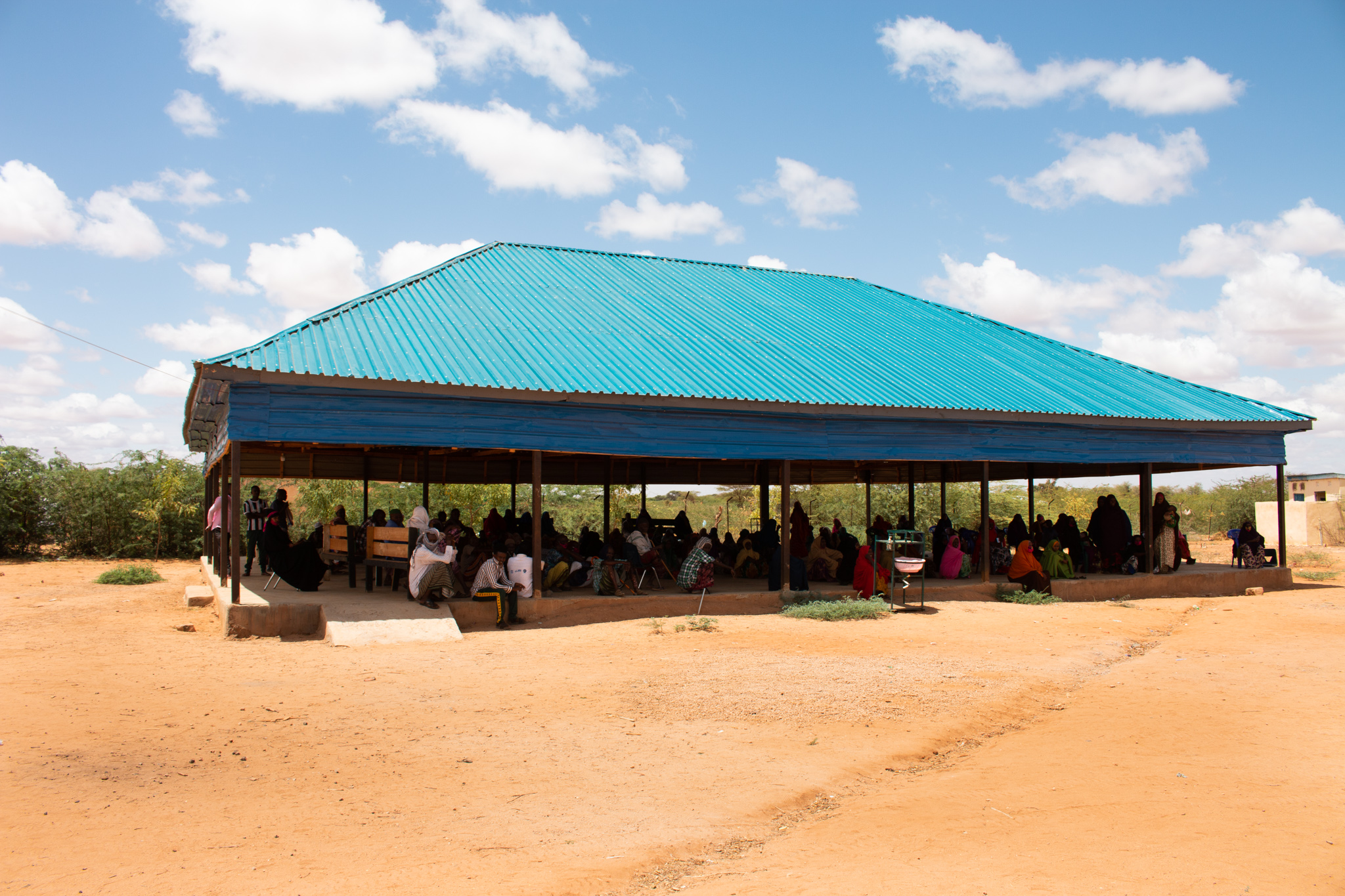 The information centre in Kaansale IDP site in Doolow and the recently improved distribution and waiting space constructed by community members through a cash-for work programme. Photo: IOM/Yuko Tomita 2020

But after only three months, the first COVID-19 case arrived in Somalia. Organizing big distributions and receiving people at the information desks became a major challenge as physical distancing became crucial to contain the spread.

THE HOTLINE SAVED MY LIFE

Sharing correct information regarding COVID-19 and proper hygiene practices became more important than ever, but mobility restrictions meant that quick solutions were needed to ensure information still reached the community.

In April, IOM set up a toll-free emergency hotline to complement the help desks stationed at the information centres.

For Hareda, the hotline was crucial when she was in a complicated situation. She says “it saved her life."

The 45-year-old mother of seven children arrived to Kismayo in 2018 from Dadaab, one of the largest refugee camps in the world located in north-eastern Kenya.

“Life in the camp has not been easy for most of us lately. The government imposed a lockdown that resulted in a lack of livelihood opportunities. I couldn’t work or support my family for months,” she said.

Hareda was also pregnant and, during her last trimester, she began to experience medical complications.

With no access to maternal medical care near her home, nor resources to travel to the closest hospital, she called the new IOM hotline. A few hours later, she was picked up by an ambulance to receive urgent medical care at the hospital.

“I gave birth to beautiful twin girls, both in healthy condition,” she said. With the introduction of the hotline, the number of people reaching out to IOM for assistance has increased more than six times in 2020 compared to 2019, with more than a quarter of all cases now observed through the hotline 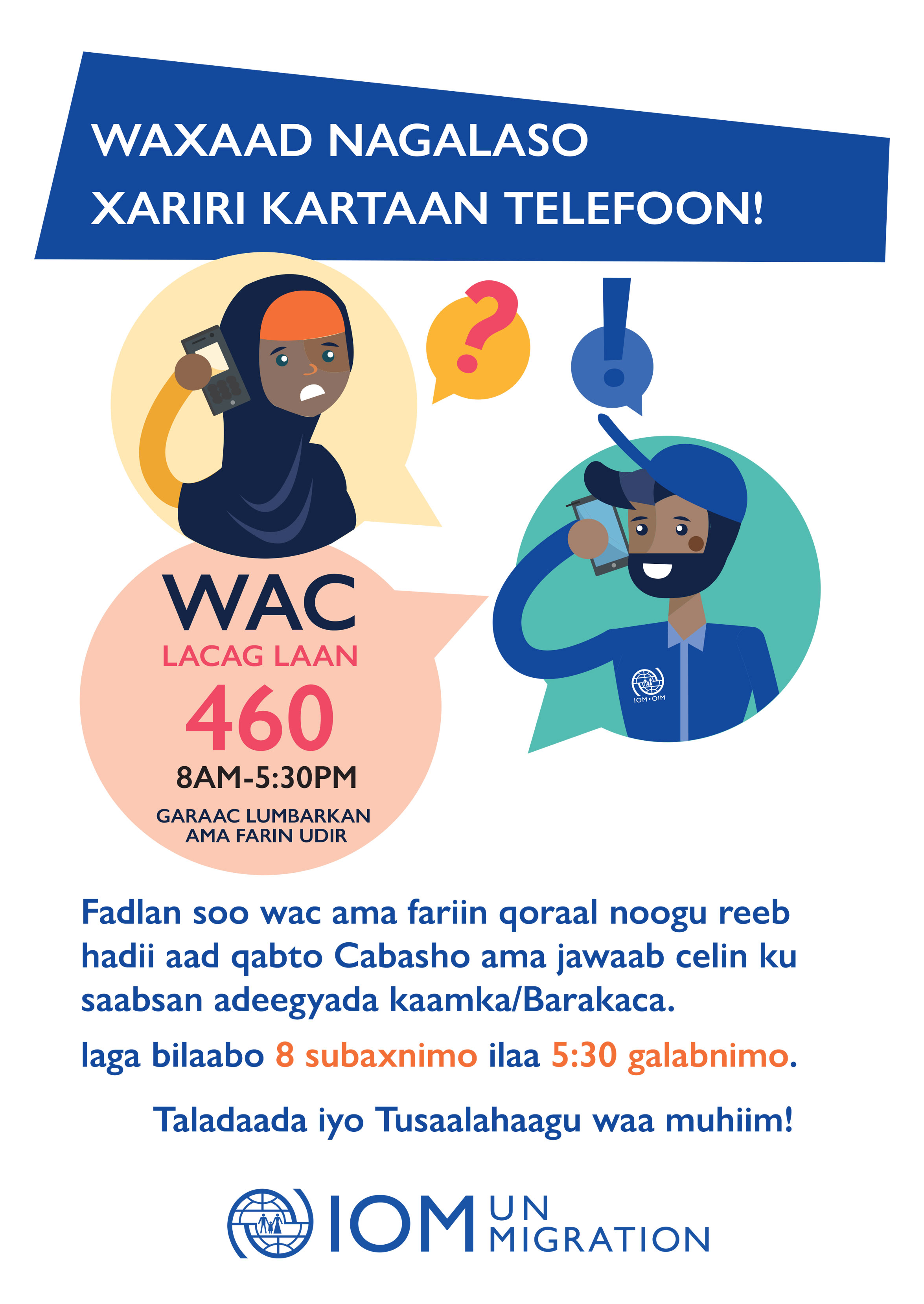 When the new hotline was set up, IOM placed posters around the sites and inform the camp leaders to ensure everyone knew how to contact the organization during the lockdown.

Information centres and hotlines like these in Somalia allow community members a chance to share their concerns and complaints with humanitarians, an accountability measure known in the humanitarian sector as Community Feedback and Response Mechanism.

This system has been operational in Somalia since January 2018, and has been the main line of communication between the community and humanitarian partners.

When somebody comes to the information centres or uses the hotline, IOM registers their case and coordinates with partners to respond to their specific needs, find solutions to challenges affecting the wider community and improve the quality of activities. 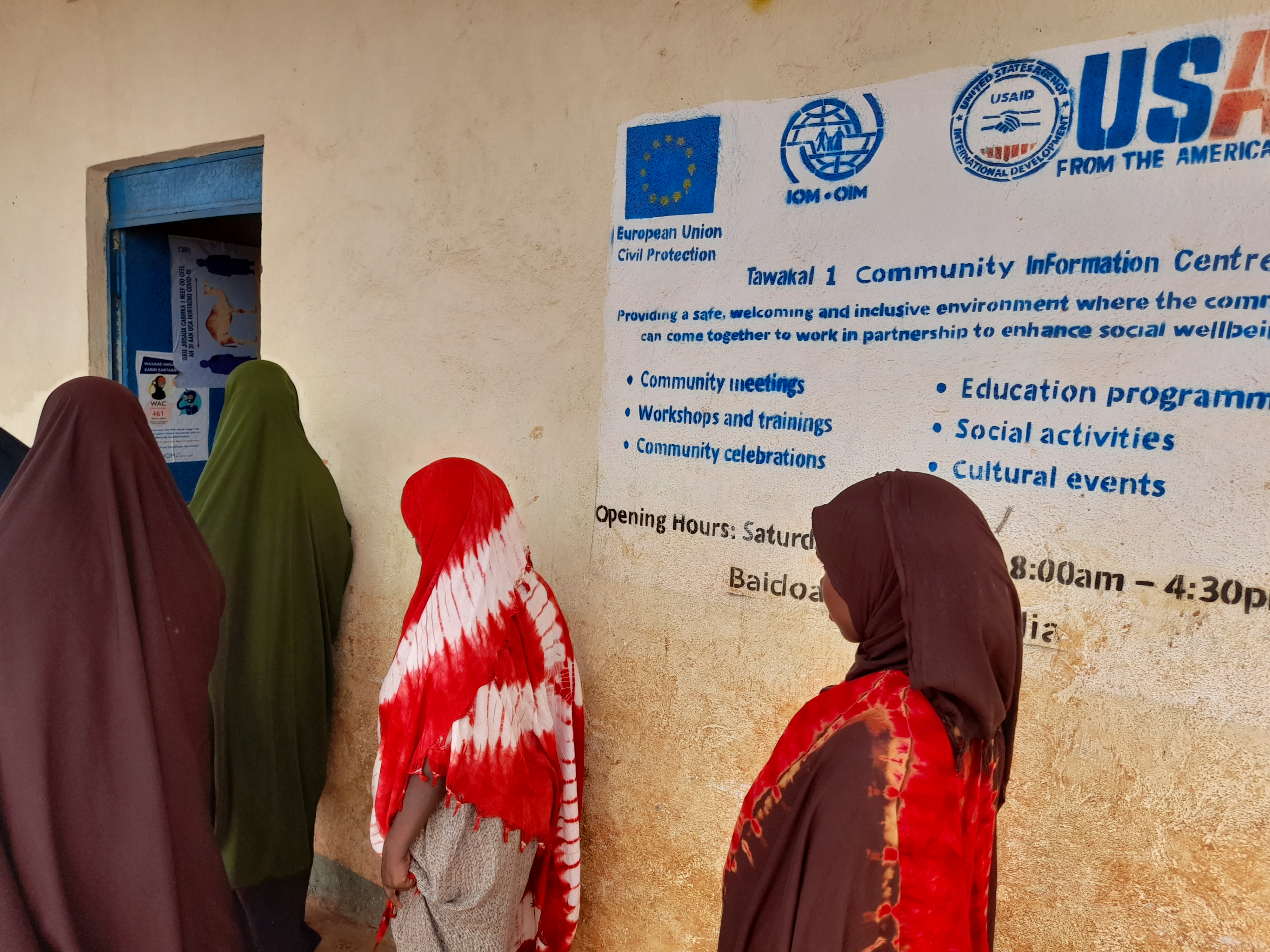 This can have a real and positive impact on the lives of people living in IDP sites.

Habso, a 43-year-old mother of ten living in Doolow IDP site, contacted IOM through the hotline and raised her concerns about the poor condition of her shelter.

“The reception team gave me a lot of information. In a few days, they came to verify if the complaint about my shelter was genuine,” said Habso.

Some days later, Habso received an emergency kit to upgrade her shelter.

“Now we will be protected for the upcoming rainy season in a better house,’’ she said.

IOM fact-checks each complaint individually to ensure that genuine cases are referred for follow up and support.

“This process is very transparent and is accepted by humanitarian partners working in IDP sites and the community,” said Mohamed Abdi Mohamed, an IOM staff in Doolow.

The Community Feedback and Response Mechanism also serves as a case-by-case referral pathway for gender-based violence survivors and vulnerable populations that need special support. The confidentiality of the hotline helps people to come forward and seek help when they experience difficult situations.

The information desks have resolved more than 15,000 cases in Doolow, Kismayo and Baidoa since it was established. The three most commonly received complaints are food insecurity, shelter and WASH needs.

The activities mentioned in this story are possible thanks to the generous funding of the European Civil Protection and Humanitarian Aid Operations (ECHO), the Office of US Foreign Disaster Assistance (OFDA) and the German humanitarian assistance. Their support has been crucial to ensure the continuation of services at the IDP sites.

When the first case of COVID-19 was confirmed in Somalia on 16 March, IOM Somalia scaled up and reprogrammed some of its activities to ensure timely assistance to those most vulnerable. Since then, personal protective equipment has been distributed to health clinics across the country. Hygiene items and awareness raising have reached over 550,000 migrants, displaced persons and their communities, and emergency support to upgrade shelters has been provided to vulnerable populations.