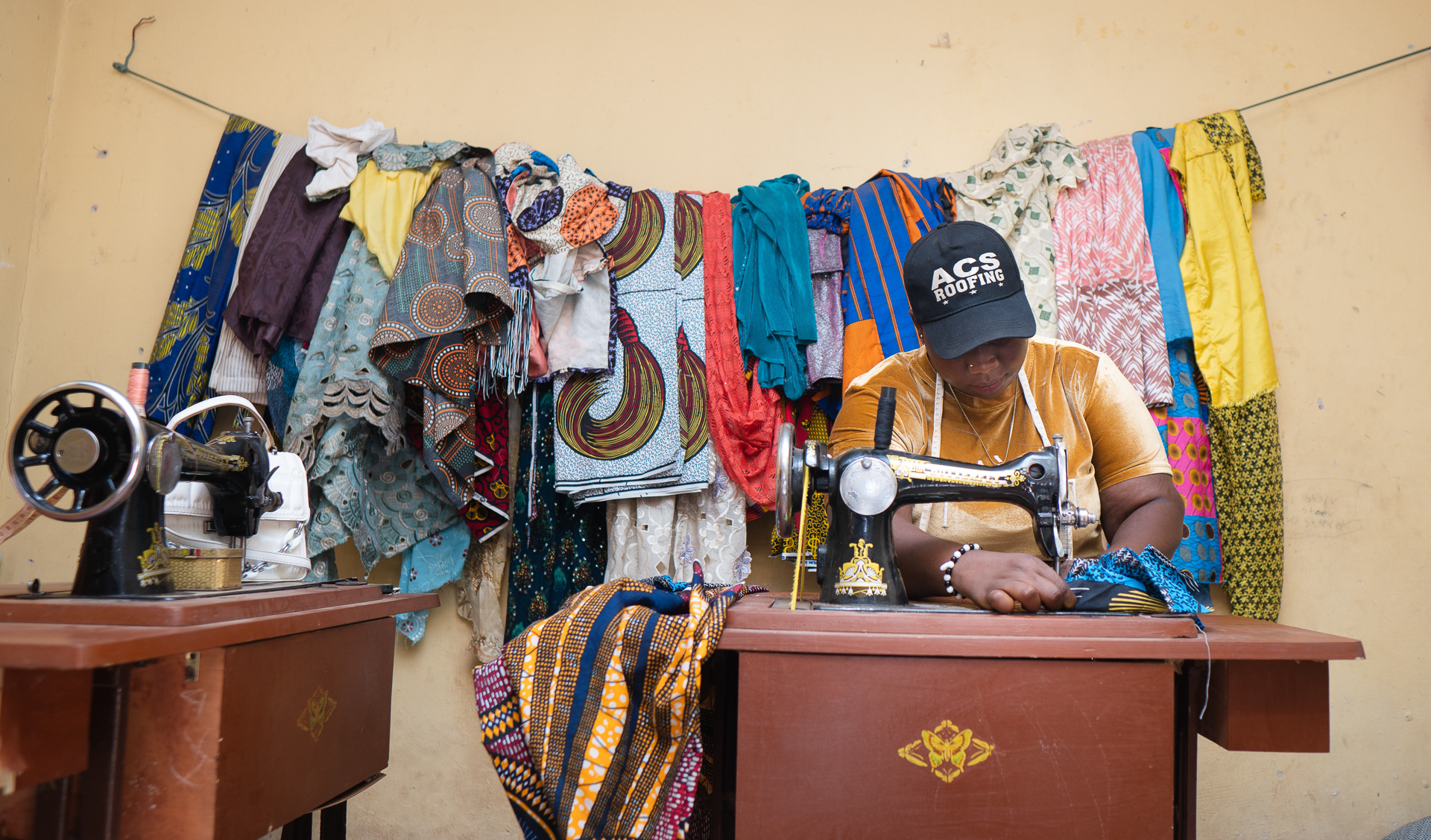 With the income from her shop, Success can provide for her daughter and pay her school fees. Photo: IOM 2022/Ultrashot

Benin City, 28  March 2022 – Twenty-four-year-old Success* stands outside her shop on the outskirts of Benin City, arranging the clothes she is selling; some of them are her own creations. Her little daughter Choice is playing in between the mannequins; she is on school break this week. Success has run the business for two years, and it pays enough to get by and to cover her child’s school fees.

At the age of 18, Success left Nigeria for Libya in June 2016 to find a better life abroad for herself and her family. She had borrowed money from family and friends, hoping to bring back wealth for everyone. Her dream stopped when she could not reach Europe but instead got stranded in Libya. “That place is not easy at all; there’s suffering, beating, rape, prostitution.”

With the help of the International Organization for Migration’s (IOM) assisted voluntary return and reintegration (AVRR) programme, she came back to Nigeria with her newborn daughter Choice. However, she did not receive the reception she was hoping for back in her native Edo State, having escaped the brutality. She was met with unhappiness about her premature return.

“When I came back, my family saw me as a disappointment, that I did not reach the place where I was planning to go. They refused to let me enter the house and told me to go back to where I was coming from. They said, ‘We spent a lot, you did not bring anything, no money, nothing!’ I had nobody.”

“They were shouting, ‘You left without a child, you came back with a child!’

A recent study by the EU-IOM’s Knowledge Management Hub and Maastricht University found that women tend to achieve lower sustainable reintegration outcomes. Females often face exclusion from the community and from their families, who link them to prostitution and consider them as “loose” females. In Nigeria, returning with a child often results in family rejection.

“[Women] are mostly the sacrificial lamb to bring their family out of poverty,” says Ayo Amen Ediae, a counter-trafficking officer at IOM Benin. “When they come back empty-handed, that is already a challenge for them; the community, the family reject them, ‘No, you are coming back empty-handed, how are you going to take care of the family?’”

Twenty-six-year-old Joy* left Nigeria in the spring of 2018, thinking she was going to join her boyfriend in Germany. She did not know that this was a front to traffic her to Libya where she spent a year and a half, held against her will, forced into prostitution.

“I could not go back home to my parents because I already wasted their money, up to NGN 1.2 million (about USD 3,000). I felt ashamed, I had brought shame on them.” 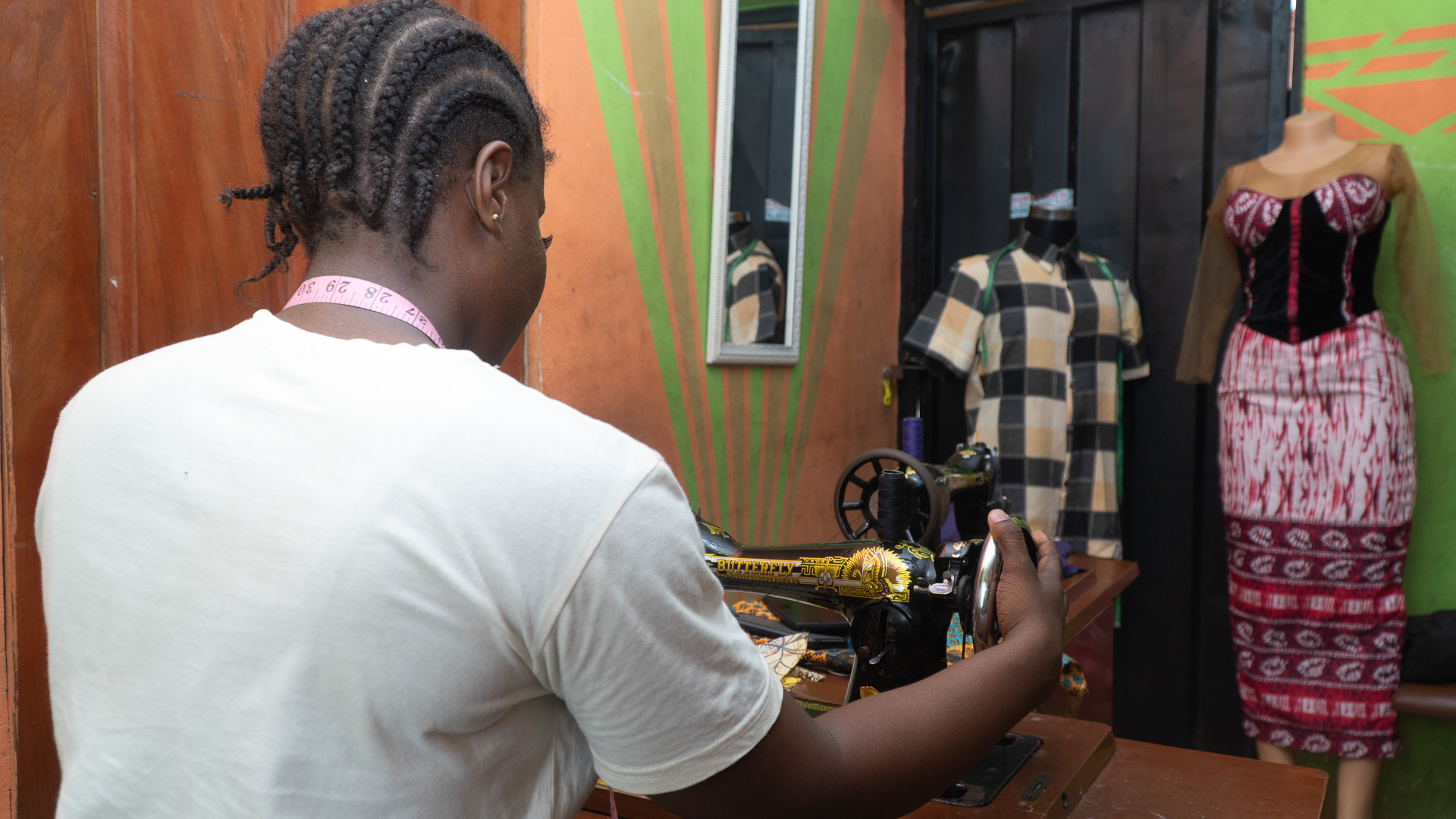 Joy is defying the stigma in society and building back her life. Photo: IOM 2022/Ultrashot

With money her mother sent, Joy was able to flee from her captivity, and resumed her plan to get to Europe, only to get arrested trying to cross the Mediterranean Sea in a small boat.

IOM provided her with medical assistance as well as basic items, such as clothes and shoes, and helped her return home.

IOM assists returning migrants in rebuilding their lives in their communities of origin. The support includes setting up income-generating activities, access to basic services including medical assistance,  and also re-establishing ties with their families and friends.

During a 10-day business skills training, the returning migrants are provided with needs-based and comprehensive rehabilitation and reintegration support.

“Within the training, we provide psychoeducation to all returnees. The psychoeducation tries to give them hope, to reassure them of being able to bounce back, prepare them, build their resilience levels,” explains Paradang Gogwim, a Senior Project Assistant on Mental Health Support to Returned Migrants at IOM Lagos. “We have a self-help handbook to support them through the journey as they reintegrate back into their community of return.”

Joy returned to Benin City to take up work as a seamstress again after completing IOM’s training. She is still paying back her debts, but her business is allowing her to contribute to her family’s financial situation. “They helped us, IOM helped us. At least I can feed myself, I can put my younger sister through school, I can send her money. I can manage myself.”

“People around think once you come from Libya, the next thing you do is prostitution, living a wild life. No! I have my job. My friend has a pharmacy. Another one works at a micro-finance bank, we are all doing fine,” says Joy. “And they are ladies, not men, they are not doing prostitution; they are doing fine. So, we are trying to prove to them, even if you come from Libya or Mali or wherever you have come from, you can become somebody, and be useful to your society.”

At the other end of the city, Success also recalls how IOM helped her find an alternative to irregular migration. “When I came back, I was thinking I should go to another country. They [IOM] said no, they told me not to go, they told me even if I don’t have money, at least my life is important. Since they gave me the shop, I can feed my daughter, I can clothe her, I can pay her school fees, I am doing so many things on my own now.”

* Names have been changed to protect their identity.