Roseline lost her leg in the 2010 earthquake and her only daughter a few years later. Photo: IOM/Monica Chiriac

Port-au-Prince, 8 Nov 2021 – Samuel believes that being blind in Haiti is a punishment. After being fired from his job because of his disability, he found it impossible to find a new trade. “It has been extremely challenging to feed my family, let alone pay for my children’s tuition,” the father of two says.

Blind for more than a decade, 48-year-old Samuel spent most of his visually impaired years in Camp La Piste, in Port-au-Prince, the capital city of Haiti. The site for internally displaced persons (IDPs) had been housing people with all forms of disabilities since the 7.0 magnitude earthquake that struck Haiti in 2010, killing more than 200,000 people and injuring over 300,000.

In June this year, the site was engulfed in flames, leaving hundreds scrambling for their lives and homeless once more. Soon after the fire, a local association referred Samuel to Delmas 103 – a school and temporary site for IDPs in Port-au-Prince – where he has been living since.

Samuel waits for his departure from the Delmas 103 site for internally displaced persons in Port-au-Prince. Photo: IOM/Monica Chiriac

Since March 2020, the alarming increase in violence has led to the displacement of hundreds of families in the urban and peri-urban areas of ​​Port-au-Prince. According to the United Nations Office for the Coordination of Humanitarian Affairs (OCHA), in Haiti there are currently 1.5 million people particularly affected by the impact of ongoing violence on humanitarian access, 19,000 internally displaced and 1.1 million in need of assistance in different neighborhoods of Port-au-Prince, as well as 400,000 in the South.

Fortunately, Samuel was able to make ends meet, thanks to his wife’s small business. However, when another earthquake hit Haiti in August this year, not only did the family lose friends and relatives, but they also lost their business, leaving them struggling to find new ways of providing for their children. 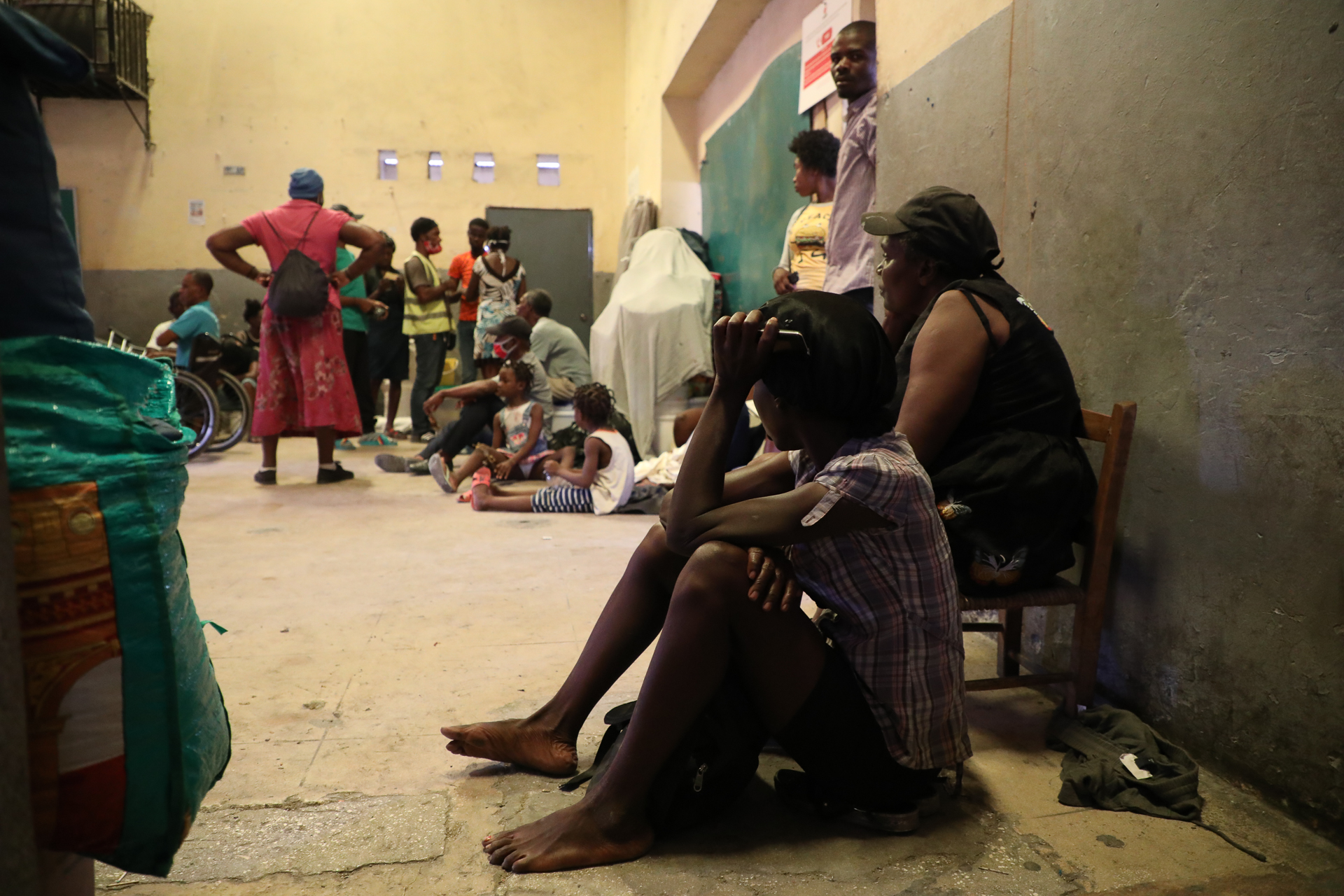 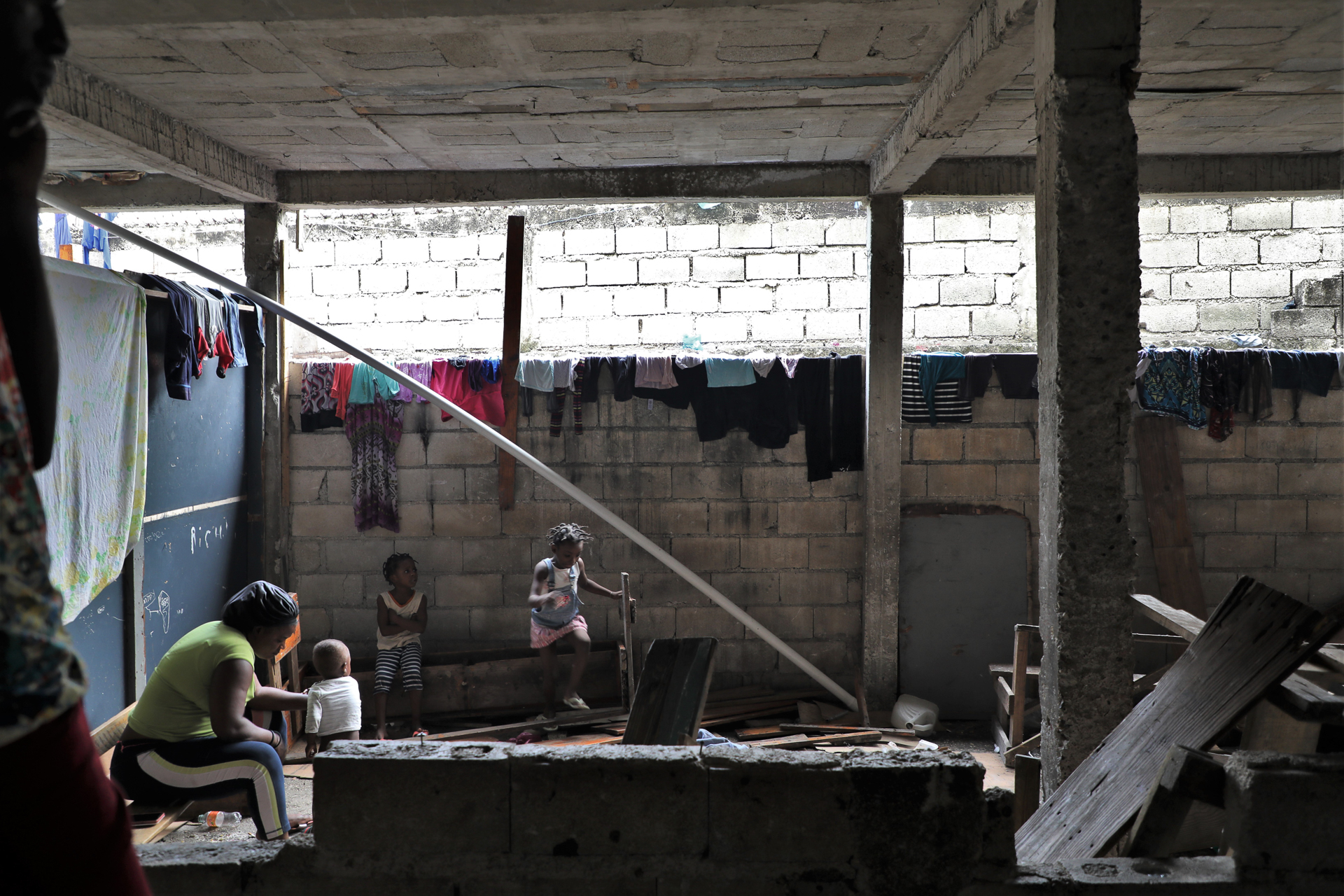 IOM has assisted all the 247 families living in Delmas 103 with their relocation process. Photo: IOM/Monica Chiriac

Since 2010, those both disabled and displaced have regularly suffered due to ongoing violence, and many are now unwilling to return to their homes. IOM aims to provide life-saving protection assistance for those most vulnerable affected by this increasing violence.

Following a needs analysis, IOM set up a voluntary relocation support service for over 10,000 people living in the neighbourhoods most affected by violence, including more than 5,200 women and girls and 550 people with disabilities. The project also targeted 20,000 indirect beneficiaries living in neighbouring communities.

The initiative considered the specific vulnerabilities of those displaced and gave the most vulnerable access to voluntary relocation, psychosocial support, medical screening and assistance, provision of assistive devices such as crutches and wheelchairs for people with disabilities, distribution of dignity kits, and support for documentation.

IOM distributed assistive devices such as crutches and wheelchairs for people with disabilities. Photo: IOM/Monica Chiriac

With eyesight problems running in his family, Samuel’s main concern now is the health of his two children who are already becoming visually impaired at 13 and 18, respectively. “The boys are haunted by the idea that they will one day go blind like their father,” Samuel says. “I need to find the means to pay for an ophthalmologist so they don’t suffer the same fate.”

Ever since the fire in Camp La Piste, Samuel’s children had been staying with friends. His relocation had to be postponed due to ongoing security concerns, but he is now finally reunited with his family. At the end of October, all 247 families living on the site were officially relocated to the regions and houses of their choice. As part of the relocation process, IOM supports each family with cash assistance to cover one year's rent.

In addition, IOM and its partner J’Aime Haïti Foundation organized training modules on income-generating activities. The curriculum was tailored to the needs, skills, experience and disability of each participant. An interpreter for those with a hearing impairment was present throughout the training to ensure that each participant fully understood the information.

In the meantime, IOM and its partners have also renovated the Delmas 103 site, known to most as the Ecole Communale de Pétion-Ville. The school is now equipped with new desks and blackboards, and ready to welcome students again – as soon as it is safe to do so. 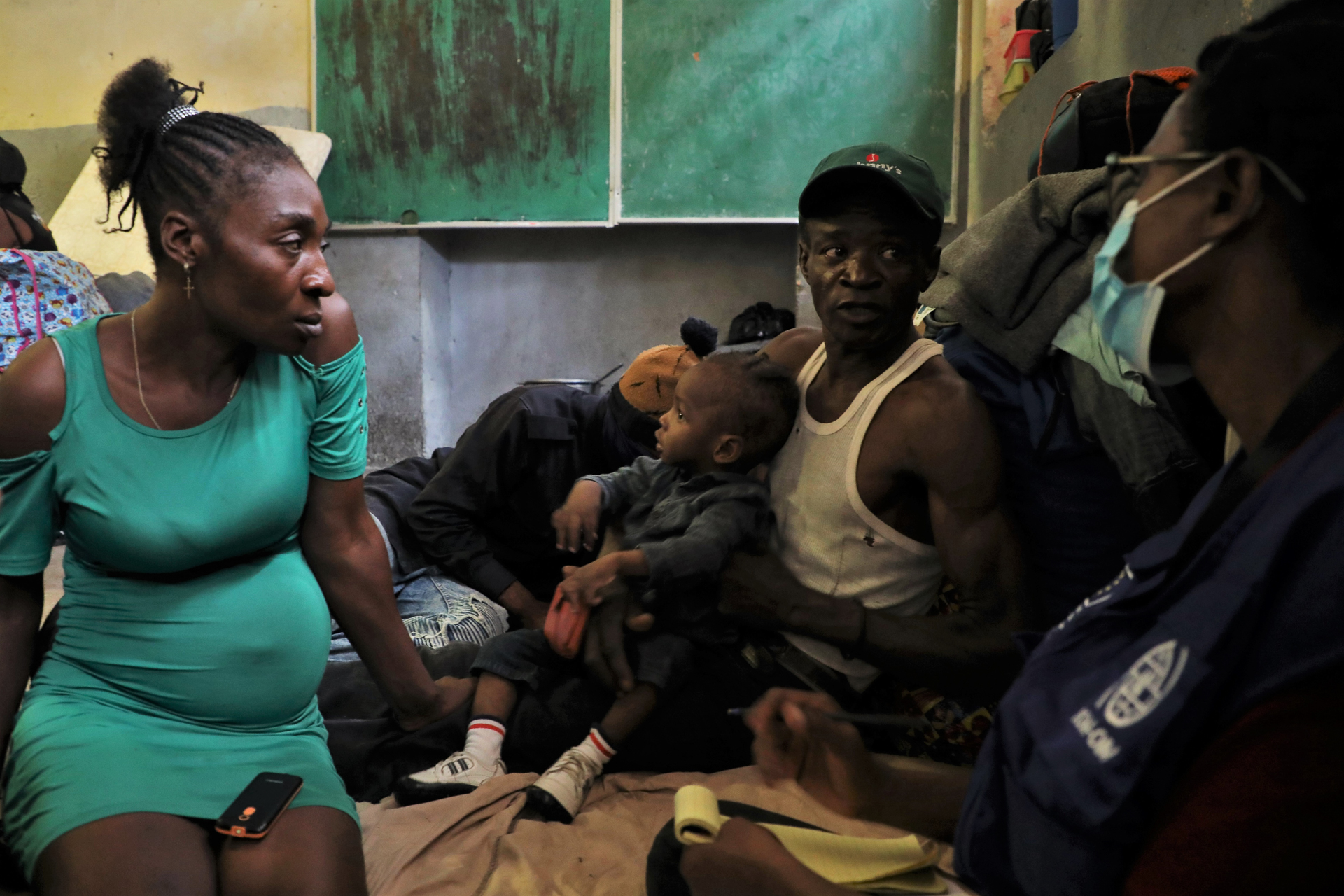 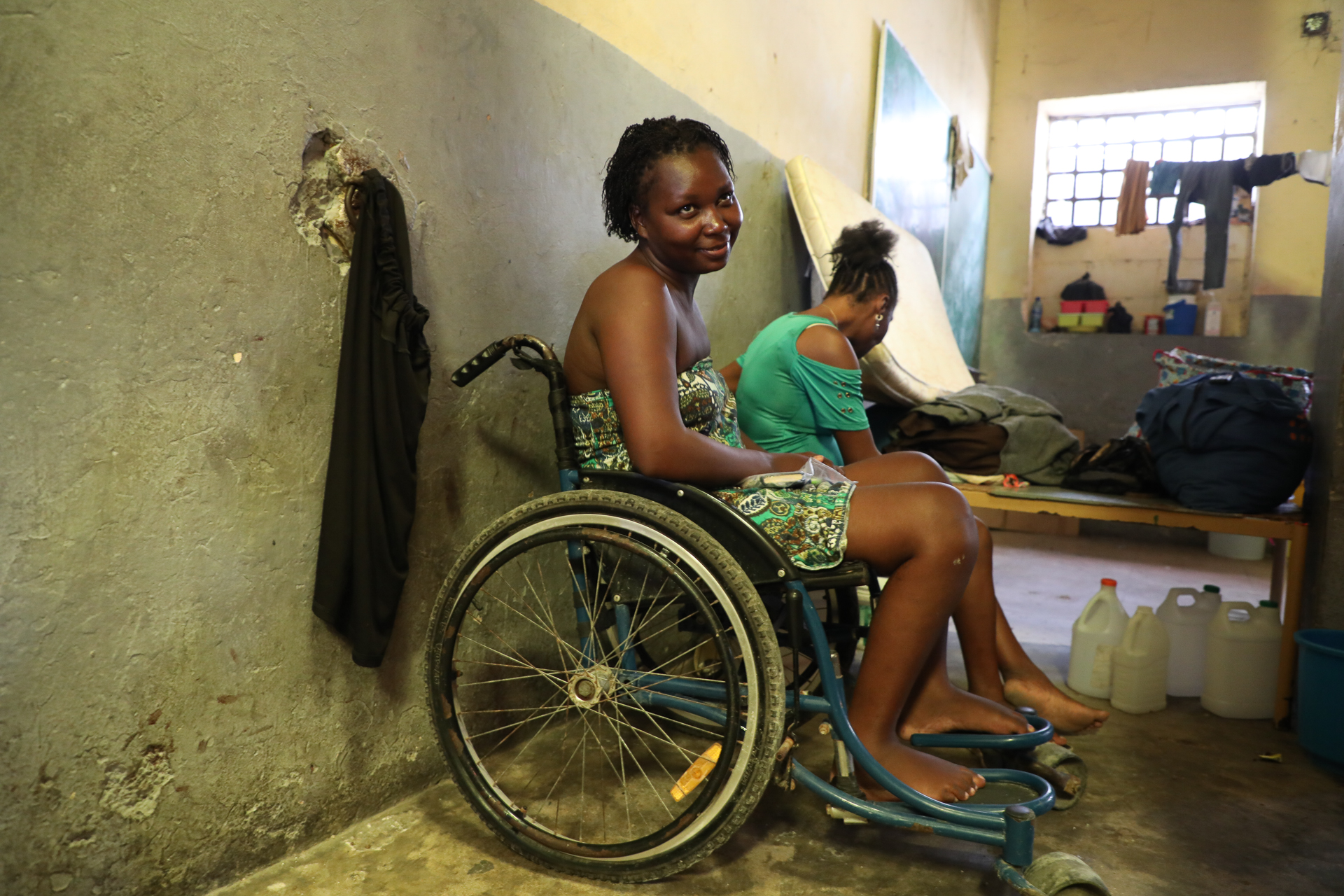 Left, Esther and Jackson pray that one day Junior could have access to special education. Right, Esther’s friend Judith believes that “as long as there is life, there is hope”. Three years ago, the 27-year-old mother of two suffered a spinal cord injury from a gunshot wound. Photo: IOM/Monica Chiriac

Just like Samuel, Junior’s family took refuge in the Delmas 103 site after the fire in Camp La Piste in June. Born with a psychomotor disability, two-year-old Junior is the youngest of the family’s three children. He attended a few sessions of specialized medical care in St. Vincent, a health facility for children with disabilities in Port-au-Prince, but had to unfortunately cut them short due to lack of funds.

Enrolled in IOM’s relocation programme, the family received psychosocial support, as well as financial and logistical assistance with their relocation to a safer environment. Currently unemployed, Junior’s mother, Esther, hopes to one day start a business.

“I pray to one day send him to a school where he can have access to special education, so that he doesn’t grow up feeling inferior to children his age,” Esther says. “I will not neglect Junior because of his handicap. On the contrary, I love him more than my other children because he is fragile.” 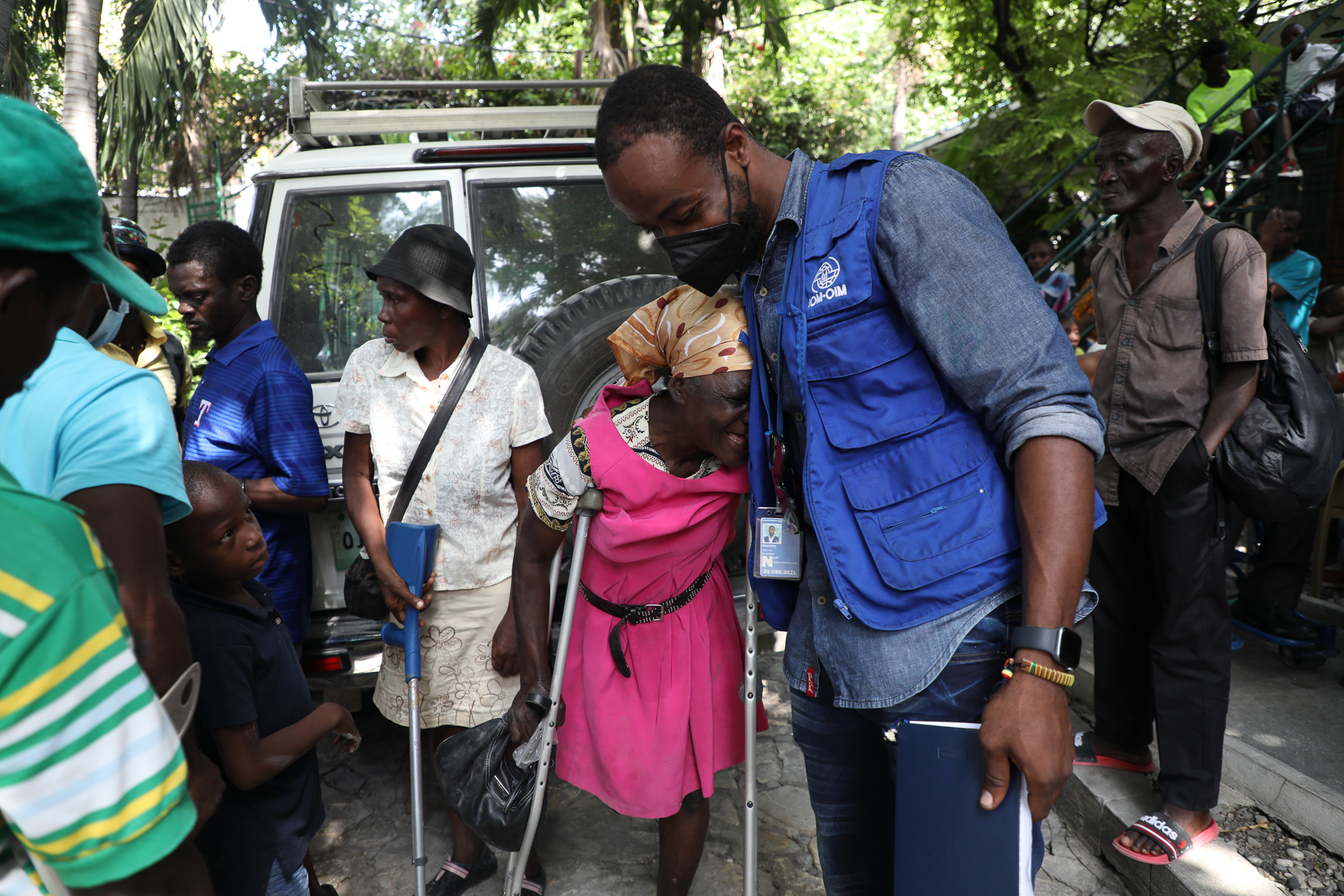 Roseline and the other people relocated are now hoping for brighter days ahead. Photo: IOM/Monica Chiriac

IOM’s relocation programme and support for internally displaced persons have been possible thanks to the UN Central Emergency Response Fund (CERF). These activities have been implemented in close coordination and collaboration with Haiti’s General Directorate for Civil Protection (DGPC) and the national Housing and Public Building Construction Unit (UCLBP).

This story was written by Monica Chiriac and IOM’s Protection team in Haiti, email: mchiriac@iom.int.