The Performance of a Lifetime: A Migrant Dreams Big in Unexpected Places 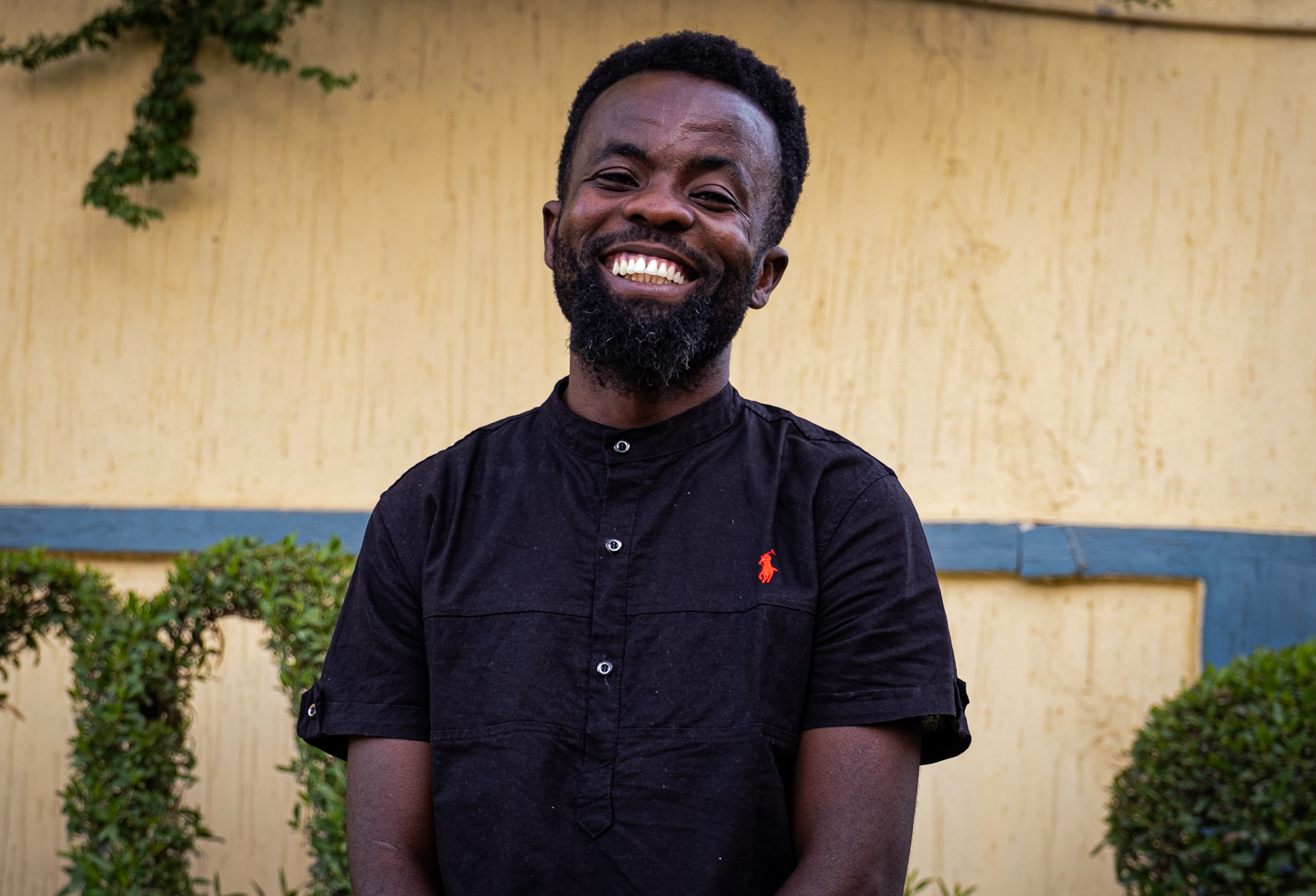 N'Djamena, 12 December 2022 – Like many other young Ivorians, Hervé was hugely influenced by media growing up. “It made us believe that life was better in Europe,” he says.

Parents often promised their children trips abroad to motivate them to do well in school. “My uncles told us they would take us to Europe and the United States if we were first in our class,” he recalls.

However, Hervé had other plans. “As a child, I was the entertainer at parties – this is how my passion for dance was born; I have always dreamt of breaking into the Ivorian artistic scene, following in the footsteps of big names like Serge Beynaud or Marie Rose Guiraud.”

Unfortunately for Hervé, there was no place for this dream in his parents’ house, where art was not a viable career option, and neither in a country on the cusp of a long political and economic crisis.

“I was raised by my grandmother who encouraged me all throughout her life, but after her death, life became difficult. There was so much pressure for me to succeed at home that I broke down. My father did not share my passion for dance, so I had no choice but to leave,” he says.

In 2010, amid post-election tensions, Hervé left the family home to go to Abidjan. At the time, he barely had any money in his pockets. “For me, Abidjan was the last frontier – I either made it or I died trying.” 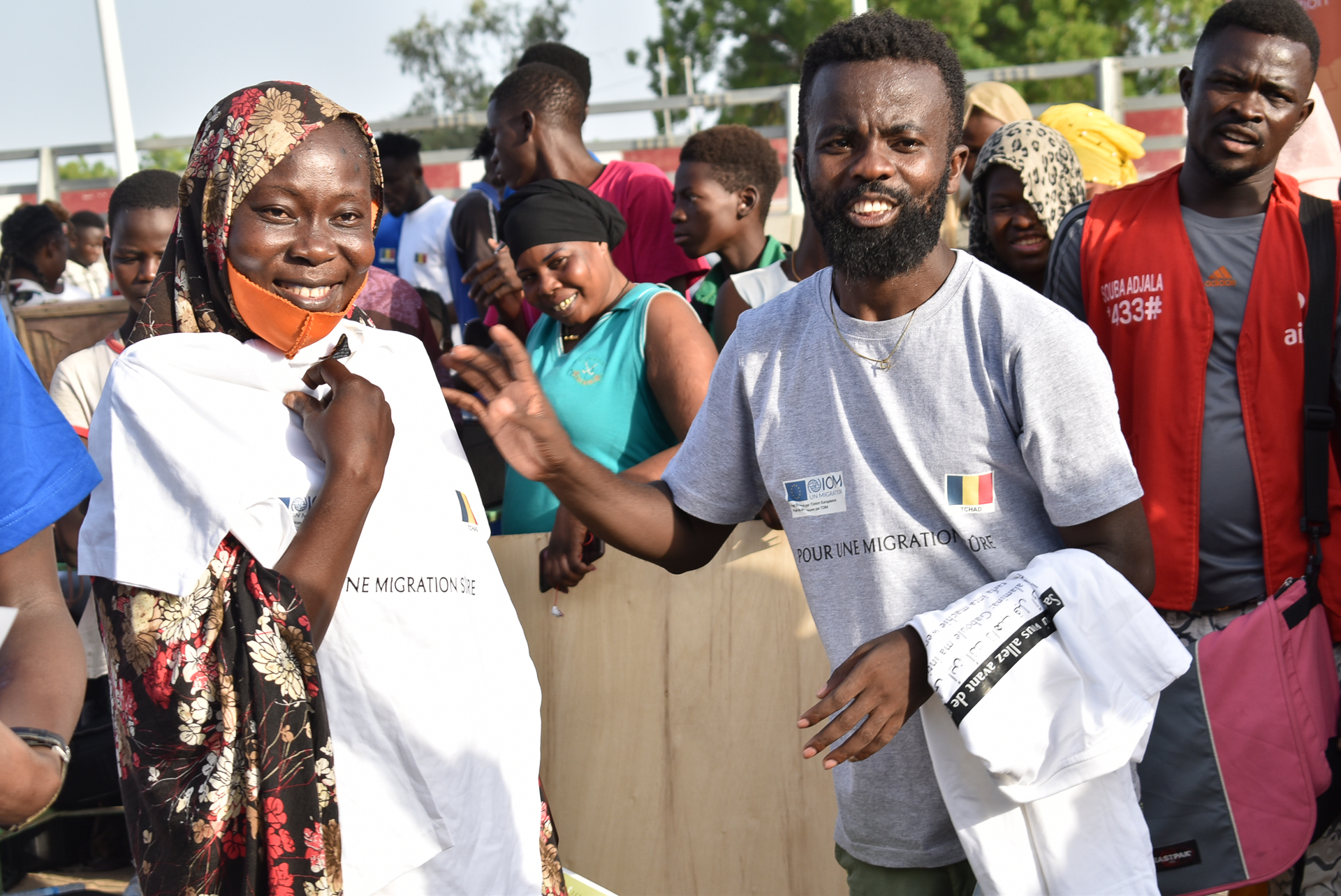 “Art is a way for me to express my emotions.” Hervé and the theatre troupe Mably Inter regularly perform across N’Djamena to raise awareness about safe migration among youth. Photo: IOM

With the help of a few acquaintances, he settled in the town of Dabou, 45 kilometers from Abidjan, where he worked as a fisherman with a host family for six months. After saving enough money, he decided to return to Abidjan, where tensions had eased, in order to enroll in the School of Dance and Cultural Exchanges founded by his long-time idol, Ivorian choreographer Marie Rose Guiraud.

After he graduated, Hervé regularly performed in various shows throughout Abidjan, which allowed him to gradually integrate in the city’s artistic scene, where he first heard about Chad. “In 2016, I was contacted by my choreographer for a performance in Chad,” he says. “It was an opportunity to join a local group of dancers who were preparing for an international tour.”

At the time, the young dancer did not know anything about Chad and was apprehensive about going there. “When I did a quick Google search, I only saw images of war,” he recalls. Skeptical, Hervé declined the offer.

When the opportunity presented itself again in 2016, Hervé decided to leave Abidjan for his first Chadian adventure. After ten days on the road, Hervé and two other dancers finally arrived in N'Djamena. The first few days were not easy, he recalls. The sharp contrast between the mild temperatures of the Ivorian lagoons and the hot and dry climate of N'Djamena – the capital and largest city in Chad – required patience and adaptability.

In the south of N'Djamena, in the so-called Paris-Congo district where he settled, Hervé began his slow integration process into the Chadian society. “I remember eating millet porridge every day because I couldn’t digest Chadian dishes,” he laughs. 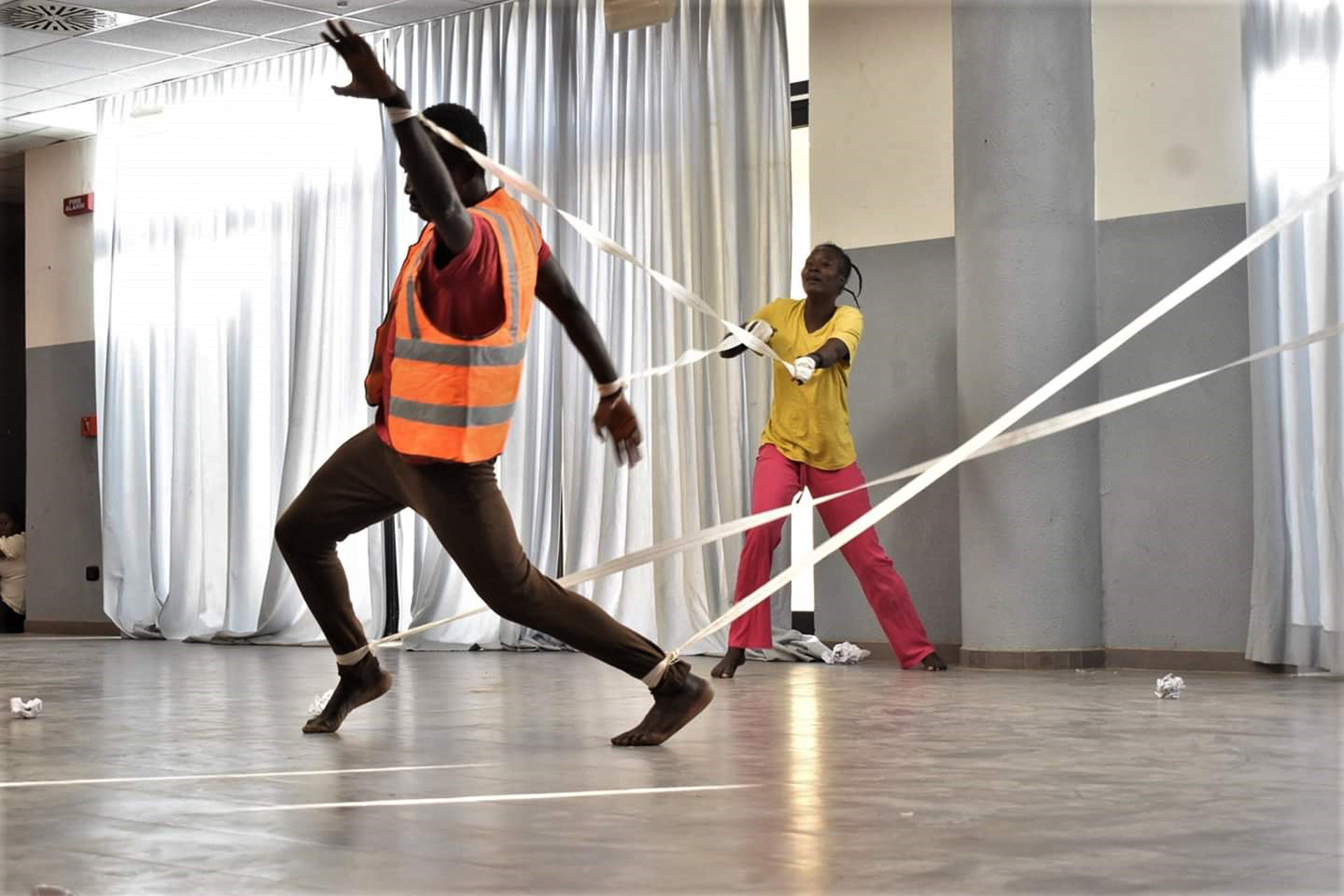 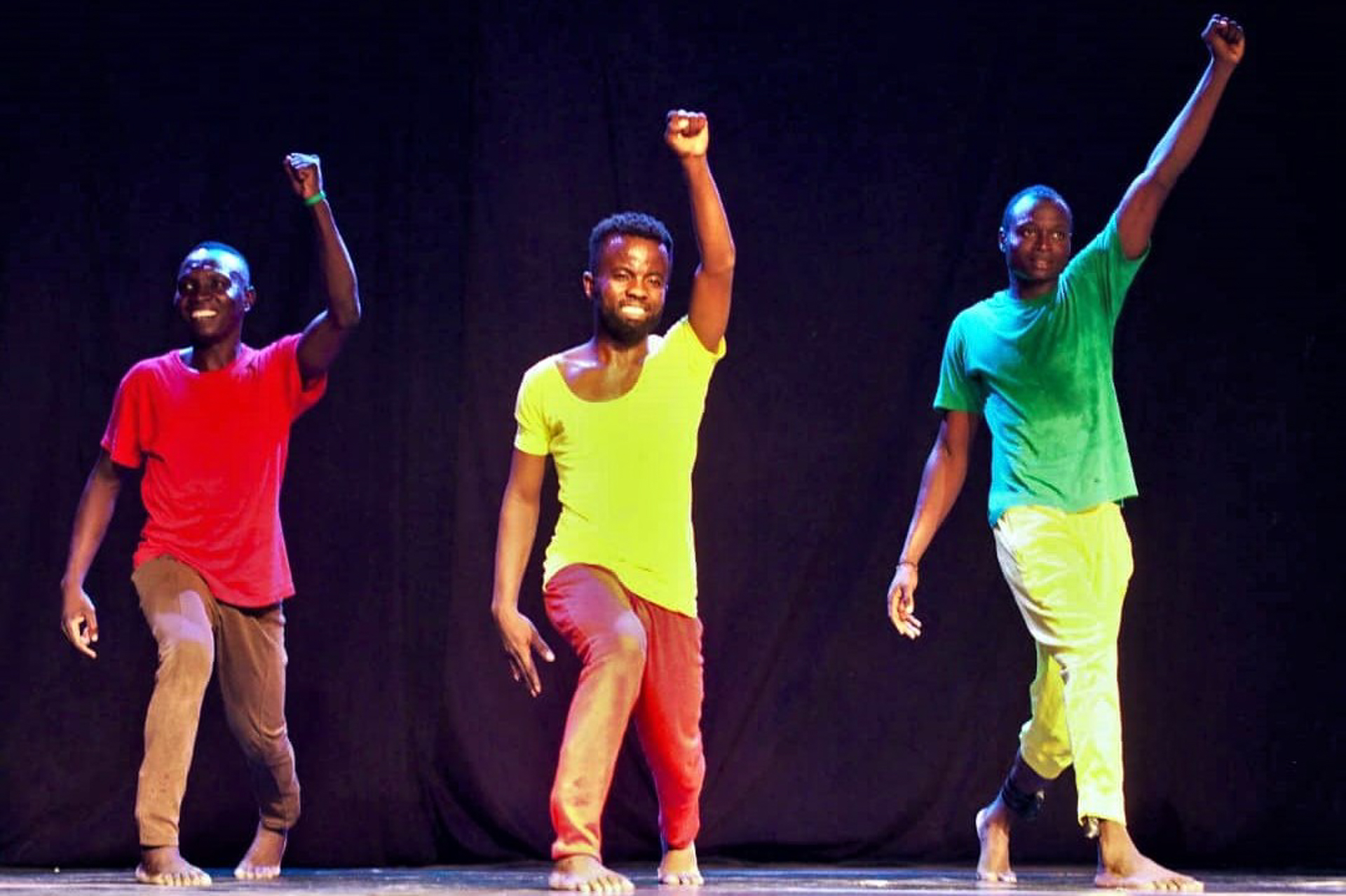 “What if I Stayed” is an original performance piece written and produced by Hervé to raise awareness about safe migration. Photo: Hervé's personal archive

Now in his thirties, Hervé lives in N'Djamena full time and works as an artist, choreographer, and entrepreneur. He also manages the Mably Inter Association, a group of young Africans passionate about art and socio-cultural causes.

He is the author of What If I Stayed, a performance inspired by the death of one of his childhood friends who tried to reach Europe by sea. “This news deeply saddened me and is what inspired me to write the play.” The performance aims to raise awareness among youths about the dangers of irregular migration.

For him, the performance was a way of expressing his emotions in the wake of this tragedy which had cost him the life of one of his closest friends. His bright smile tells the story of his own risky adventure that took him across West Africa before ending up in Chad. 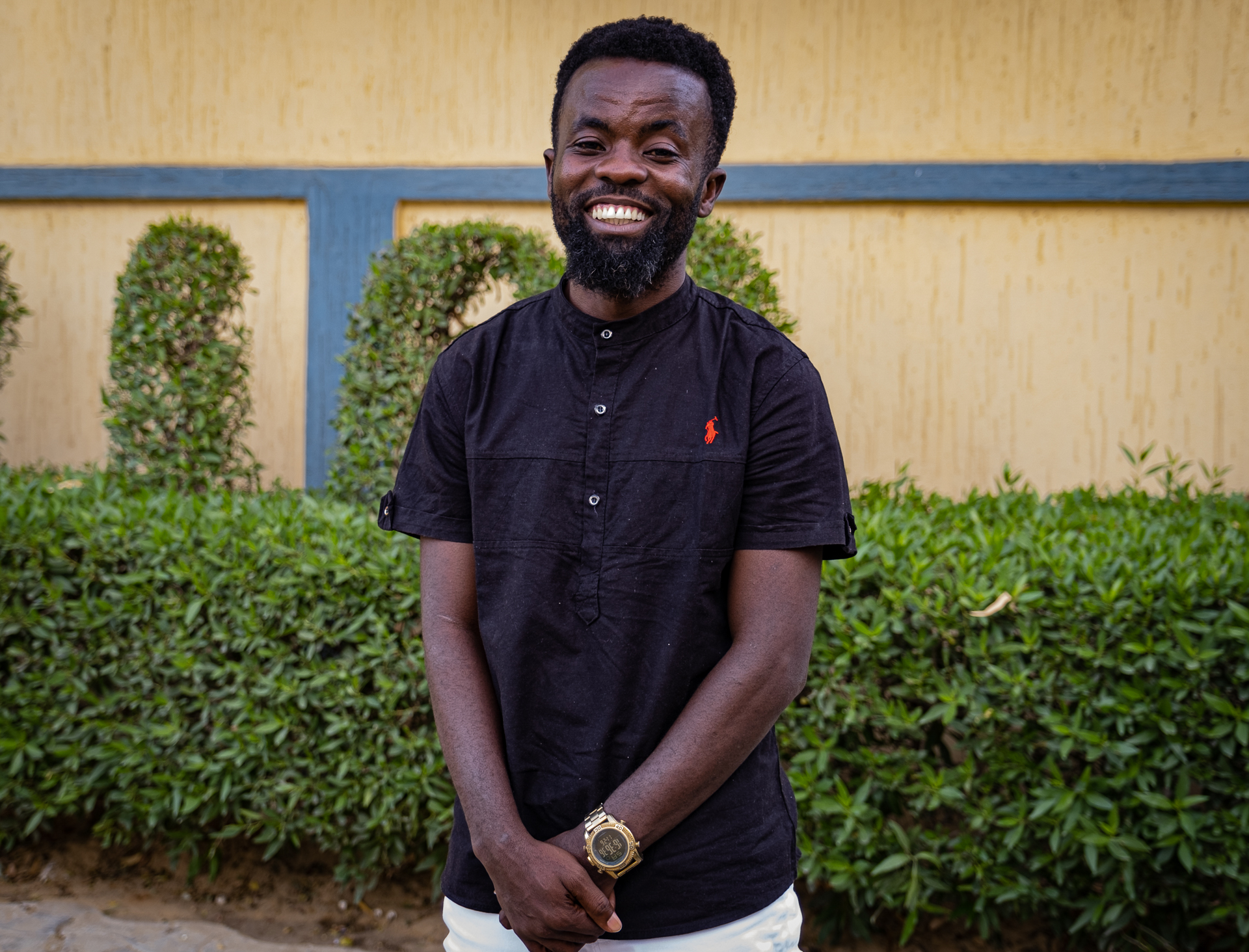 “I’m not sure why I stayed, but one thing is certain, Chad is a forward-looking country.” – Hervé. Photo: IOM/François-Xavier Ada Affana

Beyond his passion for art, Hervé is committed to changing the attitude people have towards migrants. “People tend to believe that migrants come only to take, but I want to show that we also have the capacity to contribute to the social and economic development of the country that welcomes us,” he says.

Despite the challenges, and although the option of returning to Côte d'Ivoire or going to other countries presented itself several times, Hervé decided to stay in Chad. Over the years, somewhere between passion, patience, and perseverance, Hervé grew to love Chad, which he now calls his second home.

“At home, we say that when you arrive in a village and they make you sit down and offer you a drink, you have to stay because there is food coming. When Chad gives me something to drink, I have to stay – there should be more coming.”