Preying on Aspirations: Human Trafficking in The Gambia 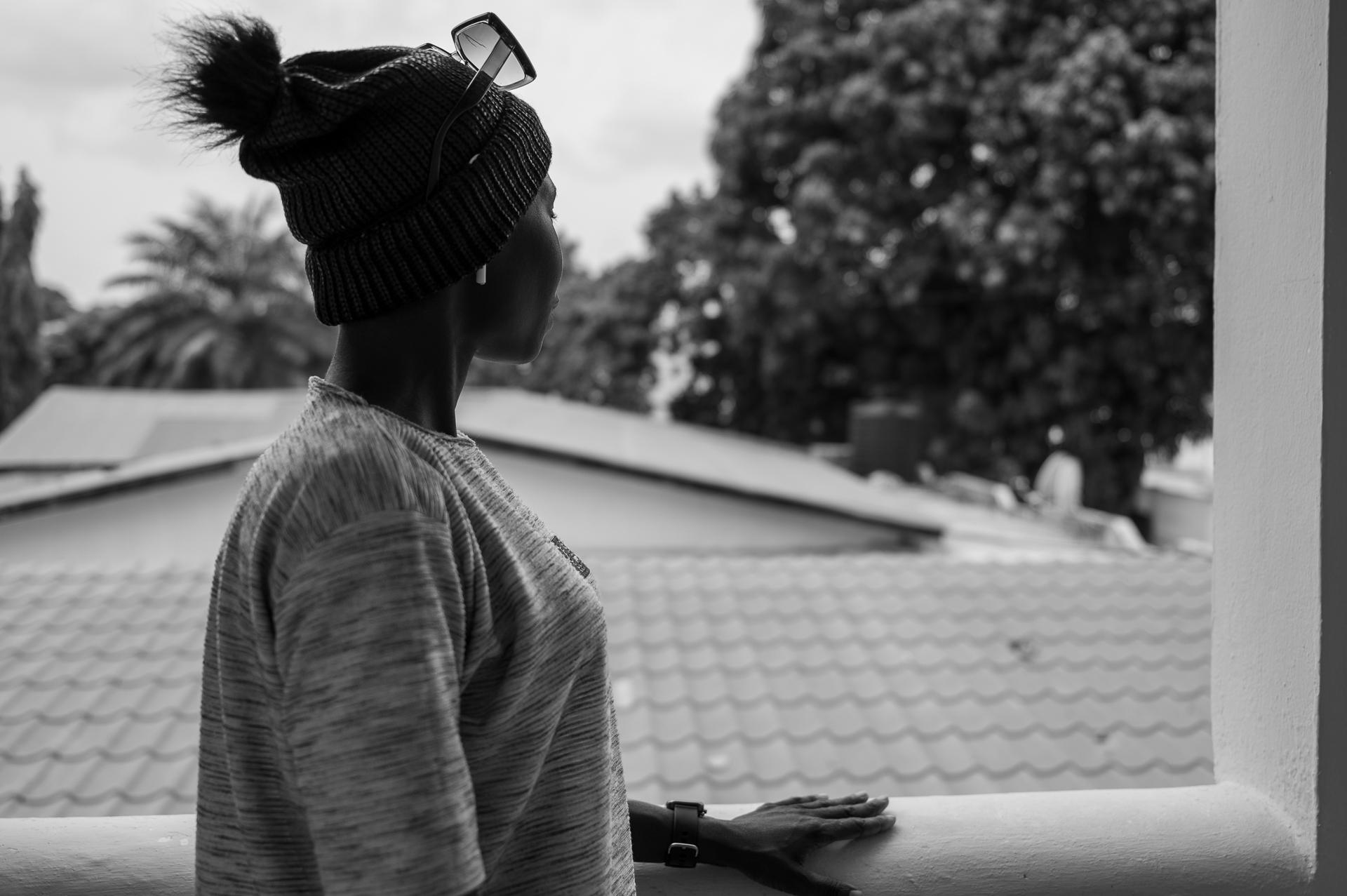 As a young single mother with limited education, Fatou was a prime target for traffickers reaching out to her online. Photo: IOM 2022/Robert Kovacs

The Gambia, 25 July 2022 – After dropping out of secondary school, employment opportunities for Fatou*, a single mother, were difficult to come by. Knowing this, one of her friends reached out to inform her about the ‘opportunity of a lifetime’.

“She told me that there’s a country where Gambian women can easily find work, find a job and be able to make ends meet for their family,” Fatou shares, reflecting on how she was lured into travel.

Fatou’s friend turned into her trafficker, who made all the arrangements for her passport, visa and flight in exchange for money from a trafficking network in Lebanon. Shortly after she arrived, Fatou was placed in a small room with several other women.

“When I got there, I was really scared,” Fatou recounts. “When their name was called, they would leave the room and never come back. I didn’t know if they would try and kill me or not.”

When Fatou was assigned to an employer, the agent picked her up and delivered her to the family that paid for her flight and travel documents. Here, she was forced to work as a maid in exchange for meagre and inconsistent pay, which she stopped receiving a few months after the Beirut explosion in 2020.

Through social media, Fatou got in contact with an anti-trafficking activist to draw attention to her situation, which eventually led to her return to The Gambia. In 2020, she was among 6,900 people in Africa estimated to be victims of labour trafficking, according to the US Department of State’s 2021 Trafficking in Persons Report. 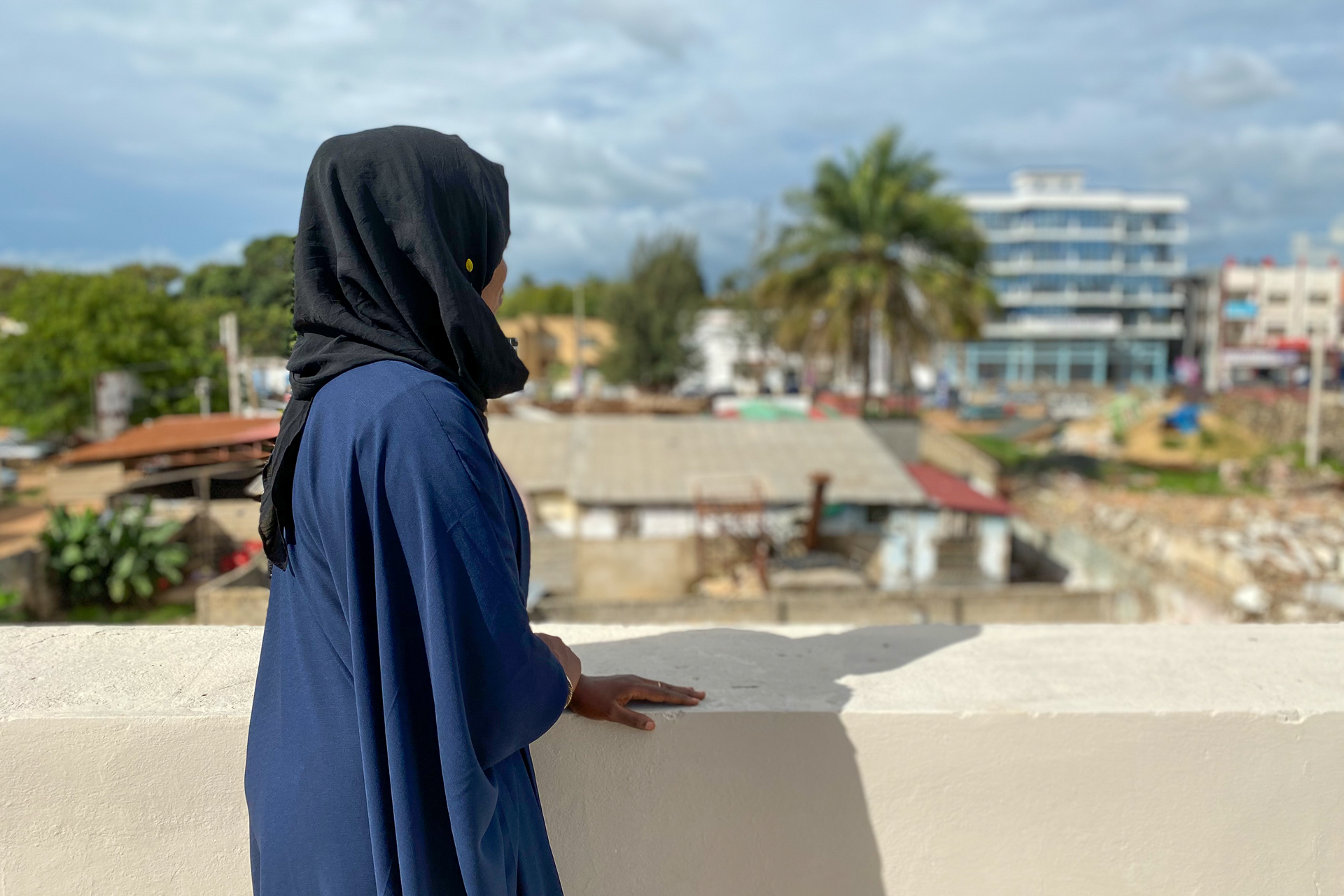 Binta was trafficked from The Gambia to Lebanon, where she faced sexual harassment and terrible working conditions for roughly a year and a half. Photo: IOM 2022/Robert Kovacs

Following secondary school, she was pressured by her family to find work.

“I felt frustrated. I was looking for work for nearly two years and felt depressed.” As a last resort, Binta decided the only way she could find work was by leaving The Gambia.

Her desperation to find work was taken advantage of by an acquaintance, who contacted her to arrange her travel to Lebanon. There, she was forced to work without pay by an employer who repeatedly sexually assaulted her.

“I thought working for him at his office would make the harassment stop, but it didn’t,” she shares.

After months of this ordeal, Binta was reassigned to work as a maid at a doctor’s house.

“I was there for 10 months, working continuously with no limits on the number of hours.” She recalls: “Eventually I got into a fight with his wife, and they kicked me out and put me on a flight back to The Gambia.” 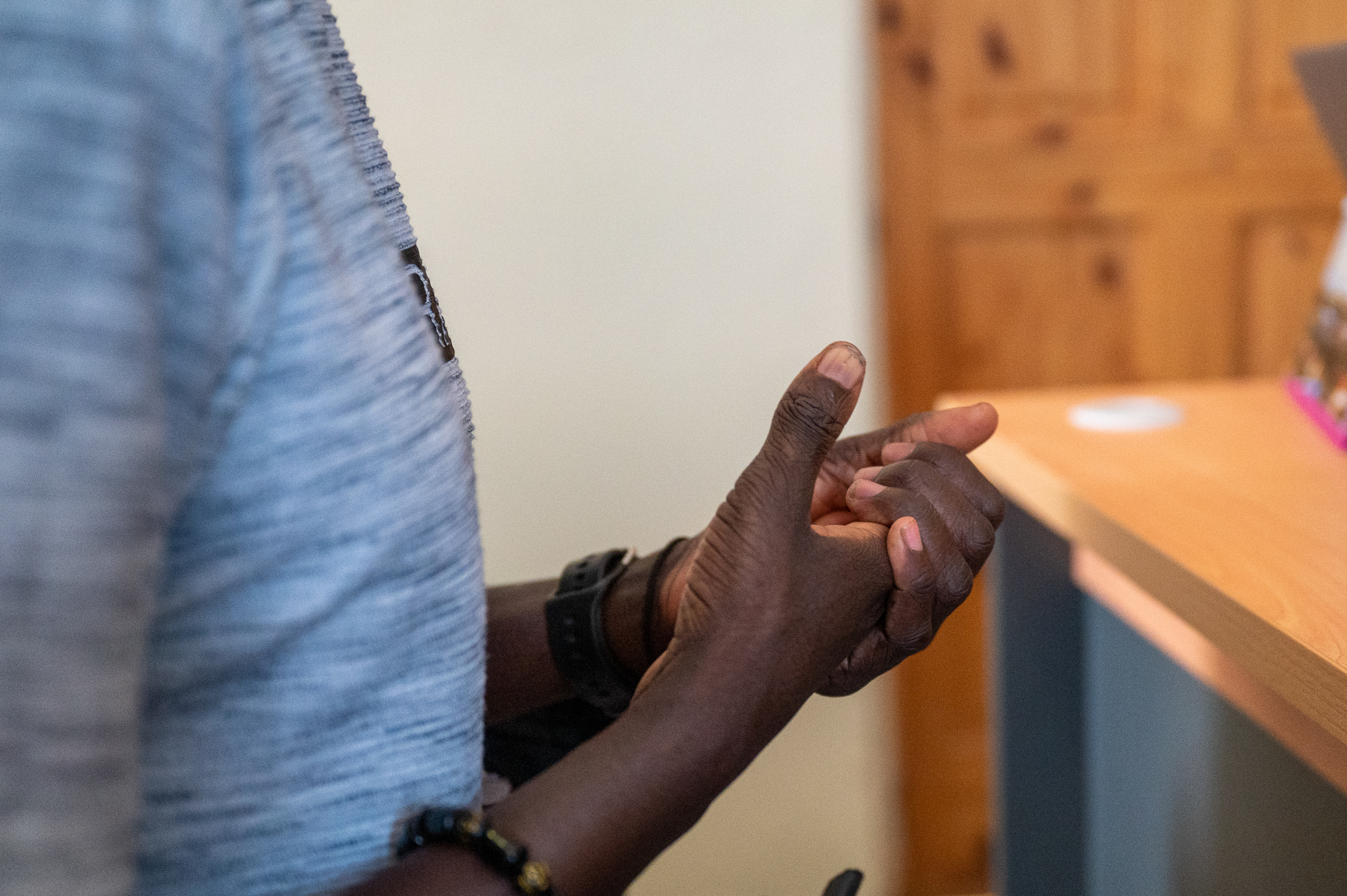 When Binta returned to The Gambia, she immediately sought assistance. “The National Human Rights Commission referred me to the International Organization for Migration (IOM), who helped me with some sewing machines so that I could generate income,” says Binta.

Reintegration assistance was made possible with financial support from the US Department of State’s Office to Monitor and Combat Trafficking in Persons (J/TIP).

With the assistance from IOM, Fatou opened a salon and cosmetics shop. “For me, it was helpful. I used the money from the salon to support my family and pay for the school fees and uniforms of my children.”

“The assistance IOM offers ranges from supporting the voluntary return of victims of trafficking to their country of origin, providing medical or mental health and psychosocial support services, and providing economic reintegration assistance,” explains Aminata Bah, a member of IOM’s counter-trafficking team.

“From what we have learned about victims of trafficking and their reintegration, we know what the most effective types of assistance for women are in order for them to reintegrate smoothly in The Gambia,” says Aminata. “We can see, for example, that women who open grocery shops, fashion shops and textile businesses are quite successful,” she adds.

“I have had the sewing machines for nearly a year now,” Binta reports. “I am working from home, but I’m making enough through them to get by.” 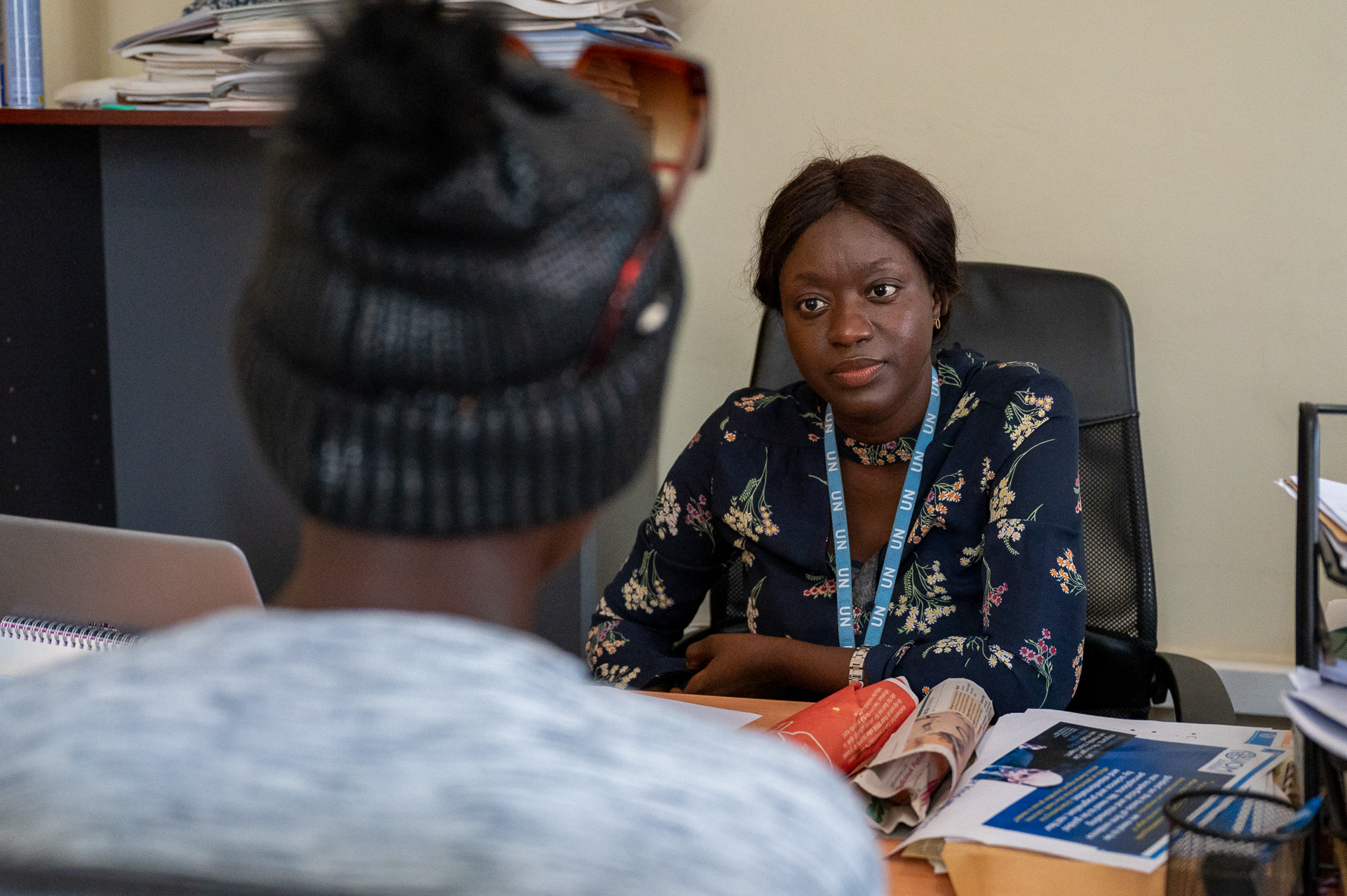 Fatou was further supported with medical assistance through medical check-ups and counselling at a One-Stop Centre that IOM helped establish. Staff were trained at these centres, positioned in four hospitals nationwide, to provide comprehensive medical and psychosocial support to victims of trafficking.

“The support really helped me, as I had to deal with a lot of stigma and discrimination back at home,” Fatou explains.

“This support is helping to make their lives better,” Aminata emphasizes. “The support IOM provides, in partnership with government and non-government stakeholders, makes them feel that they can fit back in society and have an impact within their communities.” 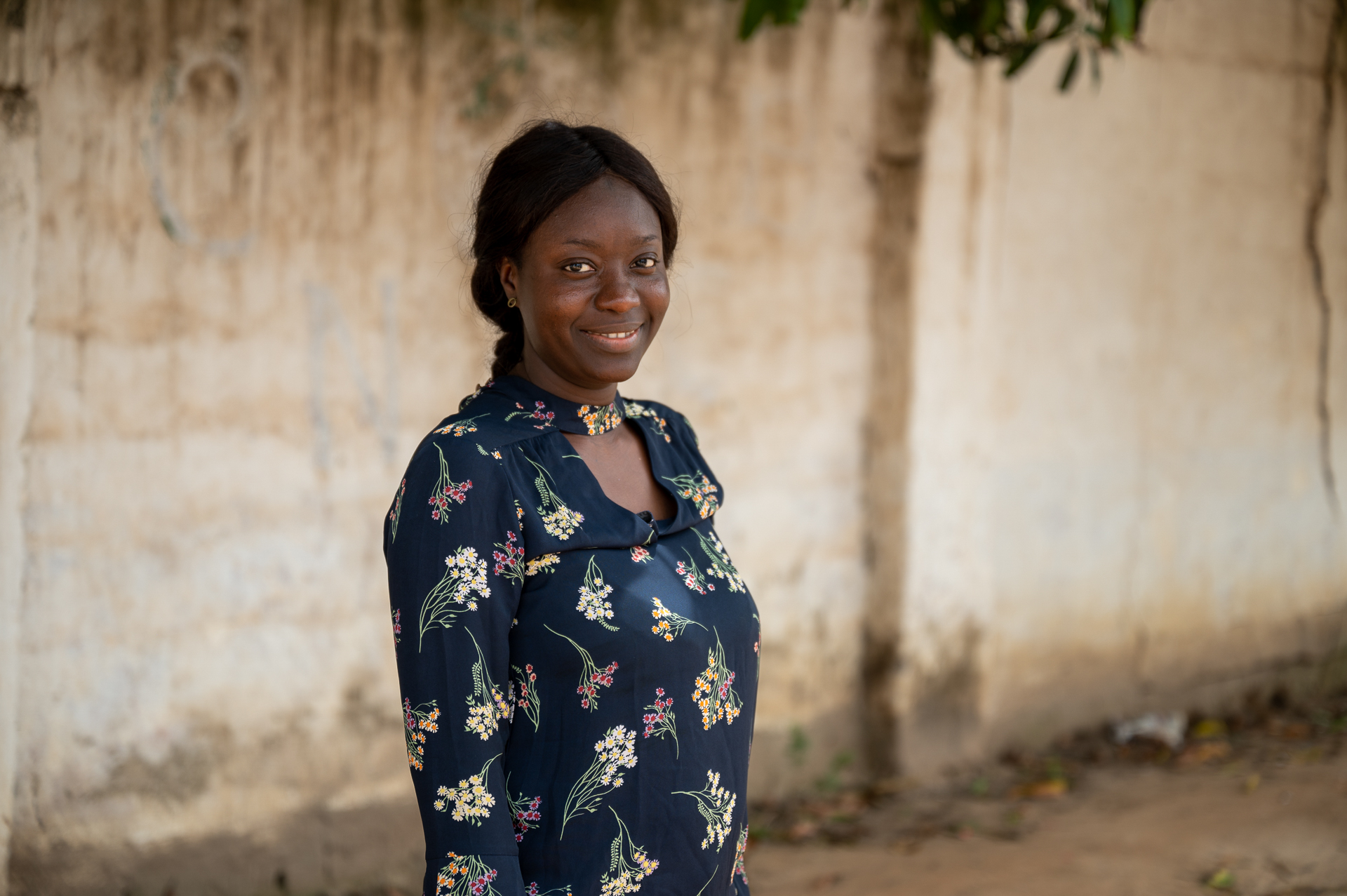 Aminata’s passion to work in counter-trafficking stems from her desire to assist women and girls affected by trafficking. Photo: IOM 2022/Robert Kovacs

Counter-trafficking efforts, nonetheless, go beyond protection and reintegration. More must be done to prevent people from falling victim to trafficking in the first place, as well as holding traffickers to account through the criminal justice system. “With so many traffickers using mobile technology to facilitate trafficking, we need to be aware about how we are communicating with people online to prevent the painful experience of being trafficked,” Aminata advocates.

Exercising caution in the digital realm is critical to preventing trafficking.

“If someone is willing to pay for your travel documents and flight to find work, ask instead if you can put that money into a business,” Fatou advises.

Aminata concurs with Fatou: “When someone messages you out of the blue to offer something that sounds too good to be true, there’s a good chance you are being targeted for trafficking.”

“Other young ladies who want to travel just to make ends meet, should reconsider traveling without knowing exactly who they will be working for,” Binta advises. “If you end up in a place that is not safe, you will be treated inhumanely. I would not want that for anyone.”

Fatou and Binta are among the 56 Gambian survivors of trafficking who have received assistance from IOM since 2017.

*Names were changed to protect identities

Written by Robert Kovacs, IOM Reporting and Communications Consultant in The Gambia