Pursuit for Power Ignites Inspiration:
A Young Female Engineer in the Making 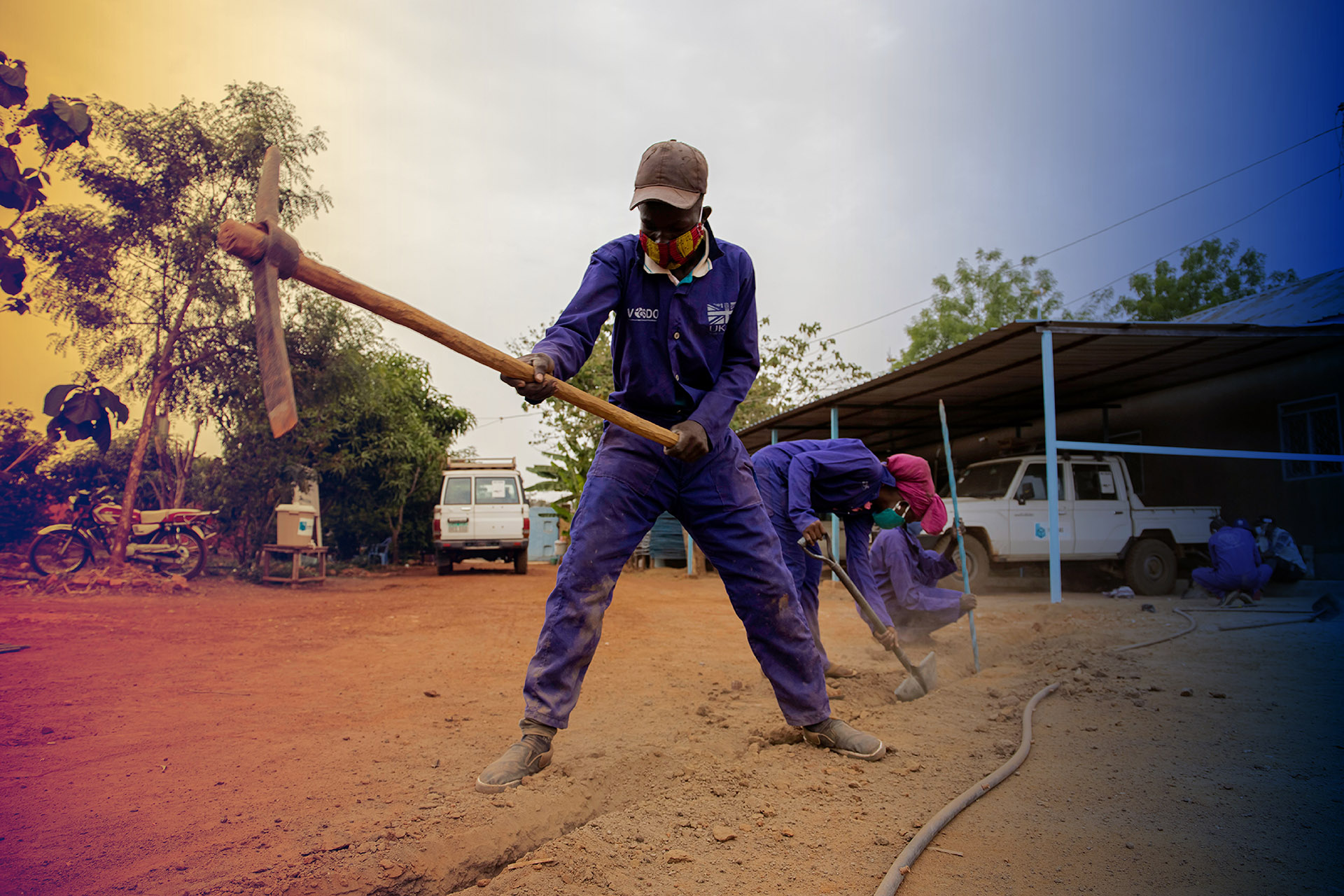 Wau, 25 Jun 2021 – Dressed in all-blue overalls, with spades and shovels in hand, a group of young men and women pound the ground digging a long, narrow furrow. The group is on site at a local business in Wau, in South Sudan’s Western Bahr el Ghazal, where they are doing work as part of a paid internship for solar installation to power nearby offices.

This is their first internship and their enthusiasm to put to use the skills they learnt is undeniable.

The group is the first cohort under the International Organization for Migration’s (IOM) Settlement Project which trains and builds the capacity of youth who were previously displaced by protracted conflict and have now returned to their areas of residence in and around the town of Wau. 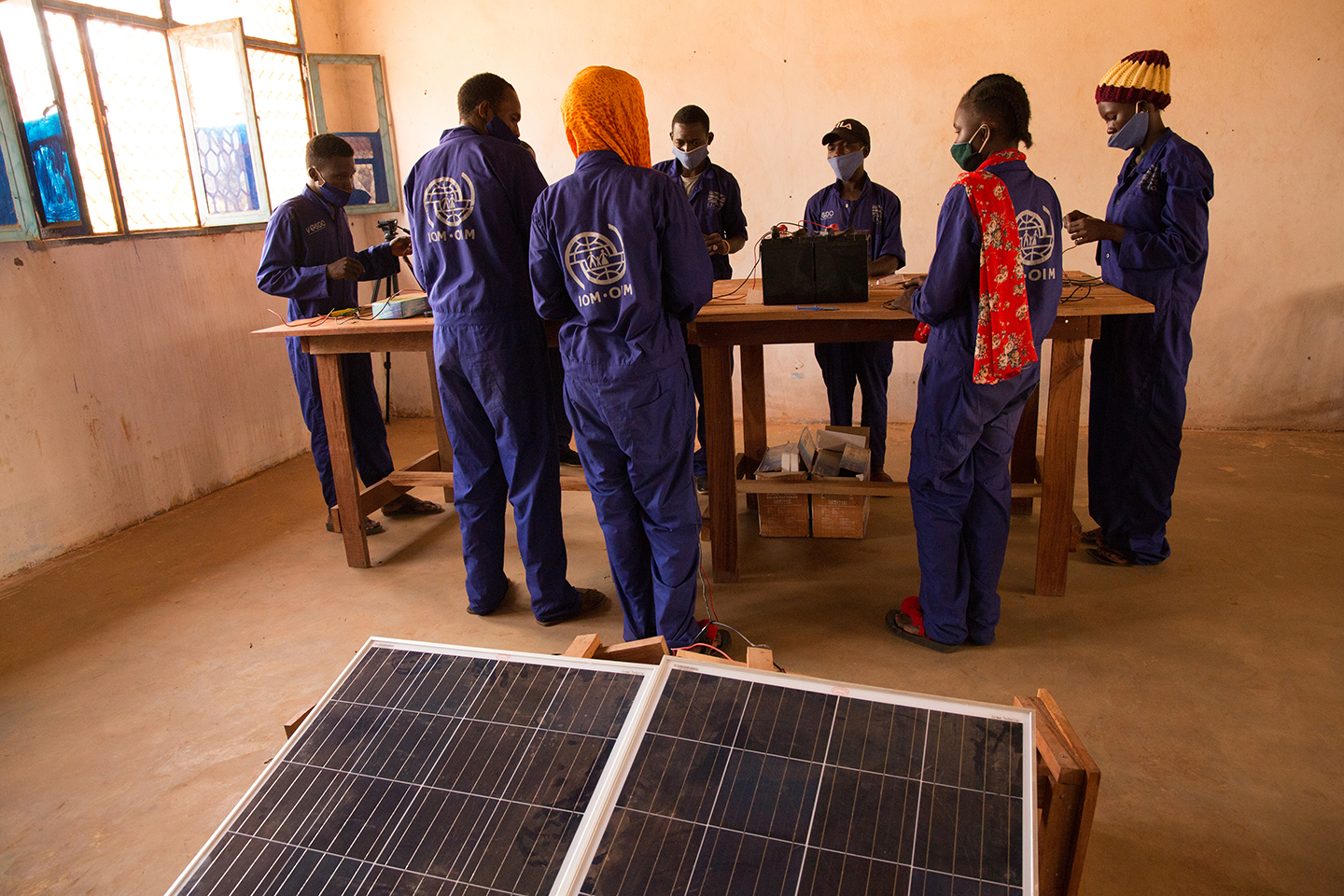 Youths learn how to repair solar panels as part of their training. Photo: IOM 2020/Peter Caton

IOM’s Shelter and Settlements Unit in partnership with a local NGO, Vocational Skills Development Organization (VOSDO), trained 30 youth – 15 male and 15 female – in solar installation, repair and maintenance to help them create opportunities as they return home to rebuild their lives.

Twenty-two-year-old Cecilia Malik, a student at Loyola Secondary School and the youngest in the group, immediately stands out as she effortlessly digs. Each raise and dig of the shovel seems to follow a rhythm she replays in her head. She is in her element. 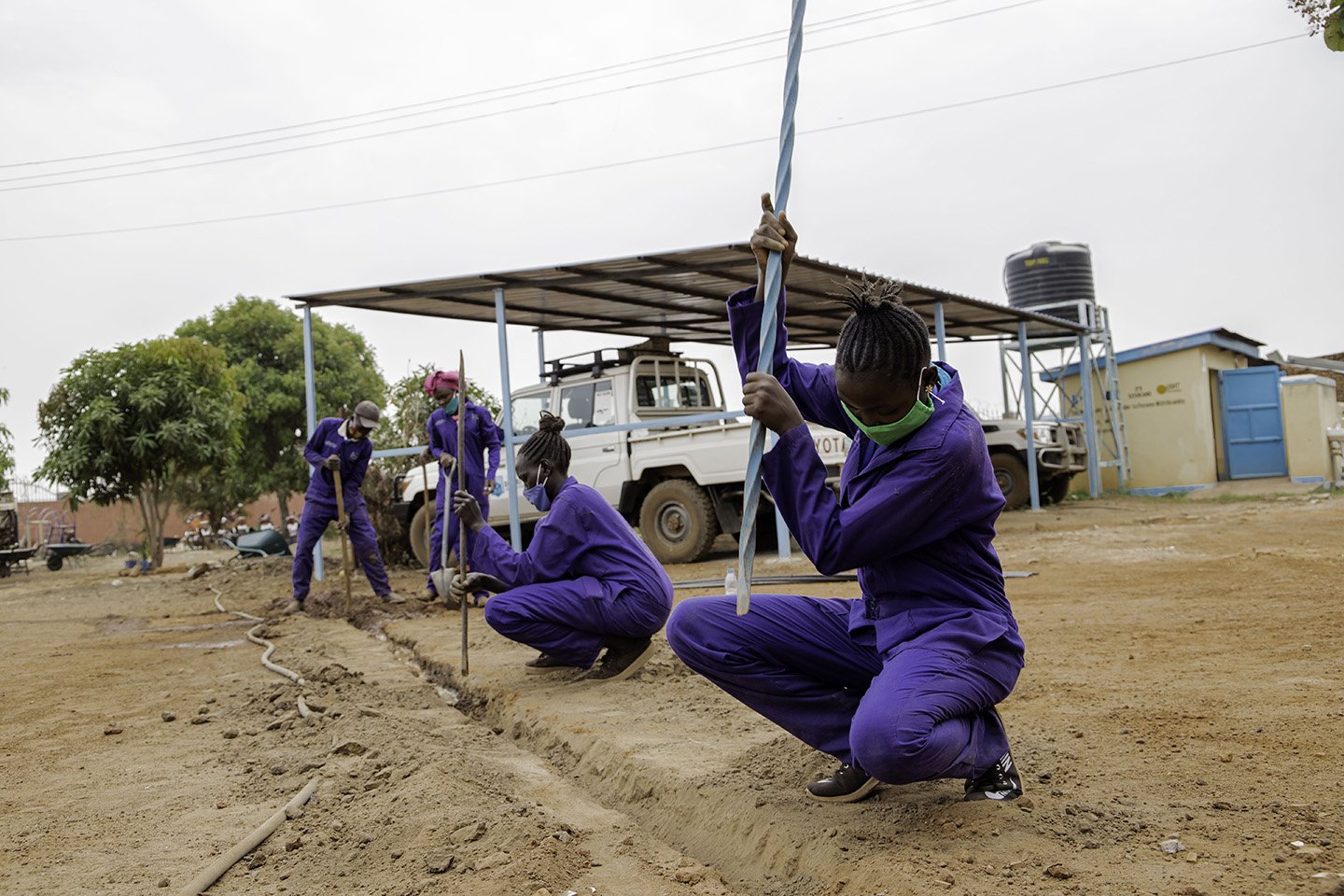 “I did not know anything about electricity and solar (power) before I had this training. When I was in school in the Cathedral (the Cathedral Collective Centre, a former internal displacement camp in Wau) I enjoyed maths and science but I never thought much of it. The training made me want to become an electrical engineer, something that never crossed my mind until now,” says Cecilia Malik.

Cecilia, the eldest of eight children, lives with her uncle in Bazia Jedid, located on the outskirts of Wau where hundreds of families were forced to flee when violence broke out in 2016. Her mother and siblings live in the village.

“My mother wanted me to stay in town so I can finish school and find a job,” she says.

In the weeks when Cecilia diligently went to the training centre, she would worry about what people in her community would say because she was doing a job traditionally perceived to be a man’s. She recalls being teased for wearing overalls. 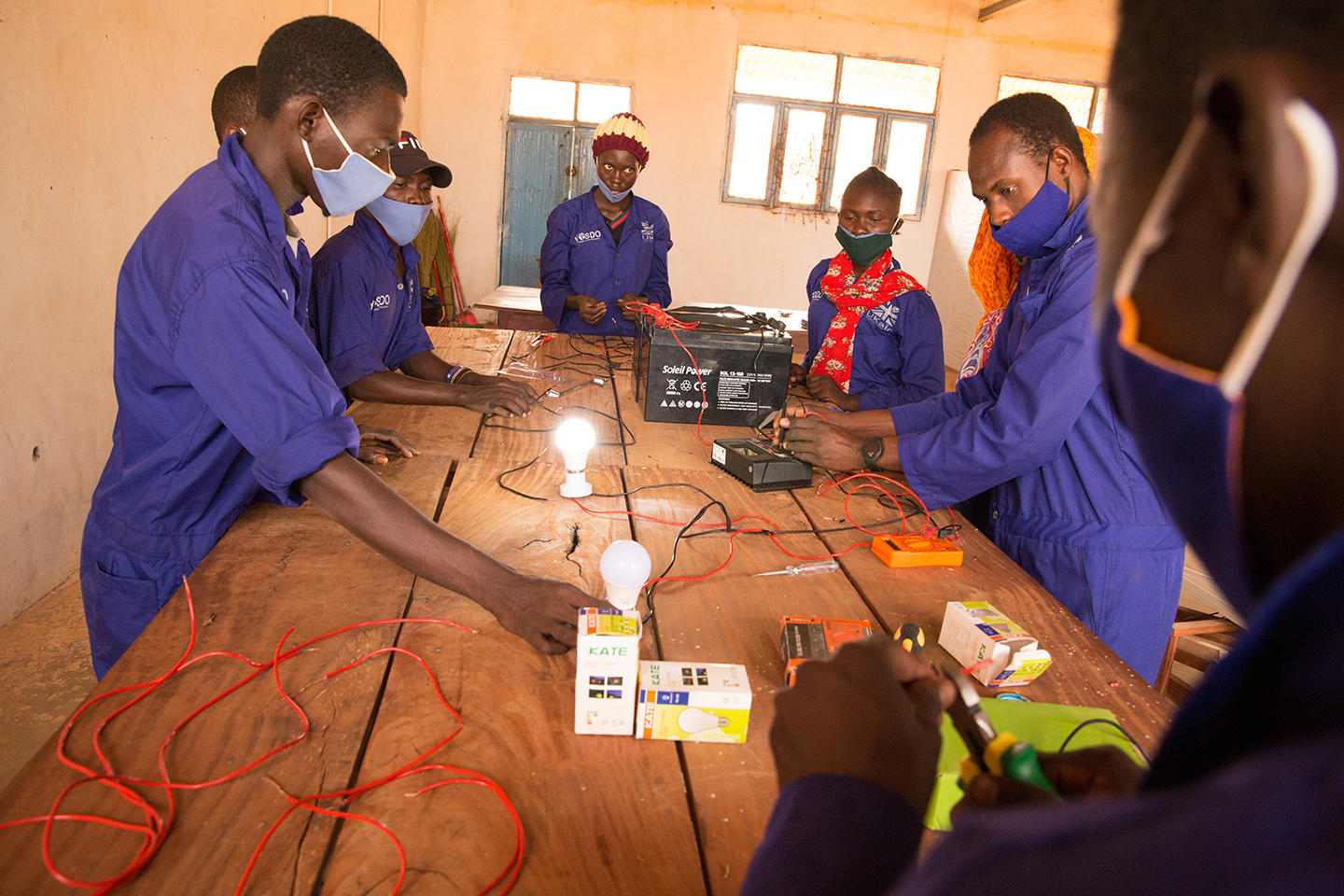 As part of community development in Wau, IOM does capacity building and training for youths. Photo: IOM 2020/Peter Caton

“I used to put my overalls in a plastic bag and only wear them when I got to the youth training centre,” says Cecilia.

“It took some time until I gained confidence in what I was learning and started to wear them when I walked to the centre – I blocked out what they said,” she adds.

A local company that specializes in solar installation has expressed interest to hire Cecilia at the end of her internship. 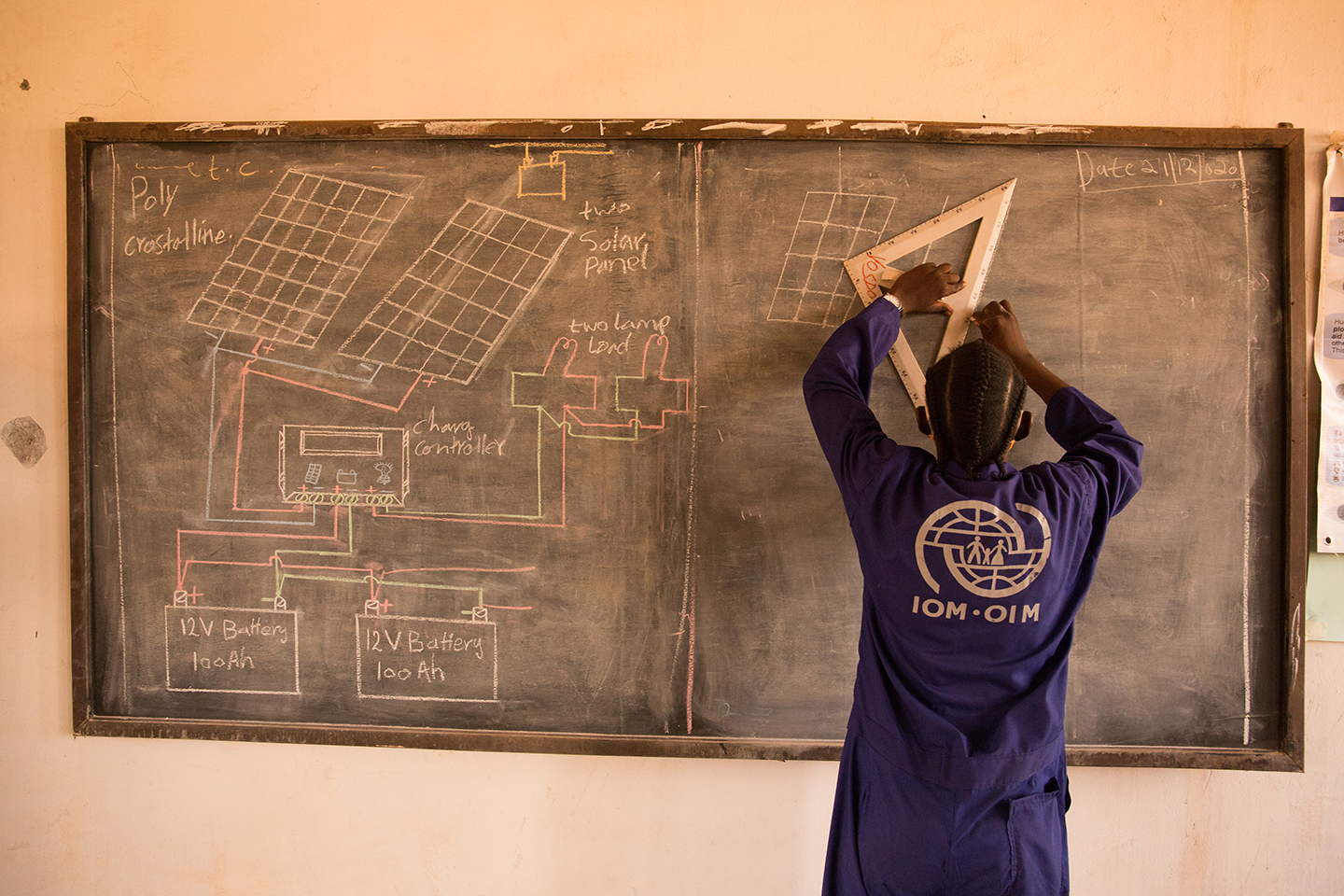 “I was very happy when I heard they wanted to work with me. I will use the money I’ll earn to pay for my school and send the rest to my mother,” says Cecilia.

At the end of the two-month skills training, IOM distributed a toolbox to each trainee to equip them with the necessary tools as they take up work.

“I hope to inspire more girls to join IOM’s capacity building activities. I dream of a day when the streets of Wau are dotted with lights that myself and other women installed,” says Cecilia.