Putting Their Best Shoes On!

2020 has been extraordinarily challenging in countless ways, but one unfortunate new record set has been the number of undocumented Afghans returning from neighbouring countries. More than 800,000 people have returned from Iran and Pakistan already this year. Such a high number is a reflection of the deteriorating socio-economic conditions in countries neighbouring Afghanistan, which has in turn added strains on the already limited economic opportunities in the country.

The World Bank has predicted that some 70 per cent of the population in Afghanistan is now living in poverty; unemployment is up roughly 40 per cent this year, and more than 13 million people face acute food insecurity during winter, according to the Government of Afghanistan and the European Commission Humanitarian Aid Office (ECHO).  All this is happening against a backdrop of ongoing insecurity and conflict-related displacements.

The COVID-19 induced economic downturn, lockdown measures and ongoing movement restrictions have hit migrants hard, spurring increased returns, decreasing remittances, and creating pressure to re-migrate. A lack of regular routes exacerbated by border restrictions is also pushing people to take increasingly dangerous journeys, and in so doing, exposing them to a host of threats including violence, extortion and detention.

Although prospects are bleak, the situation is not entirely hopeless...

Maagh, 37, a father of two young boys, moved with his family to Iran earlier this year when work opportunities at home became hard to come by. Whilst there, he found a job decorating stones and earnt a decent wage – enough to support his family. However, after the COVID-19 induced lockdown, he, along with his family, and like many others, was forced to return to Afghanistan. They arrived with their basic belongings at the border, where IOM’s cross-border team met them and provided key information about COVID-19 prevention and immediate support with transportation costs to safely reach Mazar-e-Sharif.

“When I returned from Iran, IOM helped us with transportation and referred us to the Mazar-e-Sharif office. We received cash assistance to cover our immediate needs,” recalls Maagh. 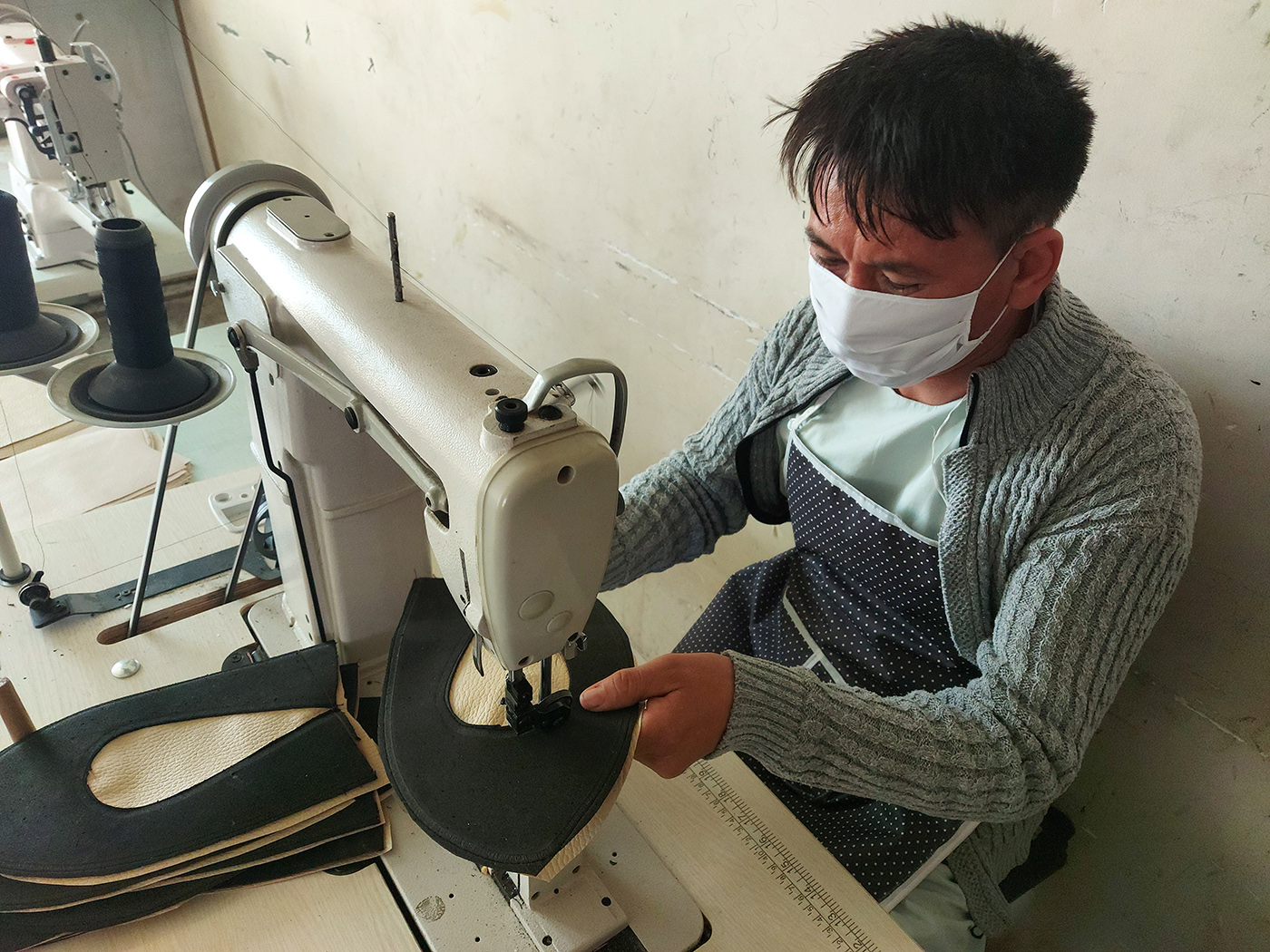 Maagh shifted his family to Iran in search of work. When the pandemic hit, he had to return to Afghanistan along with his family.

The economic downturn resulting from the pandemic has hit all Afghans hard, but particularly those searching for daily wage jobs. Maagh was no different – despite searching for casual work at the ‘chowk’ (downtown) every morning since his return, he wasn’t having any luck. He was also concerned about the increase in violence and insecurity in his home province, and decided it was safest to stay in the city.

He reached out to IOM’s Protection team, who spoke to him about the risks he and his family could face. The Protection caseworker visited his rented home, observing the lack of mattresses or blankets despite the winter fast approaching. Maagh and his family – including elderly in-laws – lacked basic goods and risked becoming homeless if they couldn’t cover the rent.

Maagh and his household received cash assistance to buy essential items and, after IOM referred them to the World Food Programme, they also received much needed food assistance. Alongside this immediate assistance, the IOM caseworker linked Maagh to their reintegration assistance programme (Reintegration Assistance and Development in Afghanistan - RADA) in order to access a regular income and develop new skills. He was delighted at the opportunity and discovered a hidden talent for shoemaking.

“IOM found me employment at the Bashir Ahmad Sediqi Shoe Company in Mazar. Besides providing me a stable income, I also learnt the art of shoemaking and the skills needed to run a business,” says a confident Maagh. 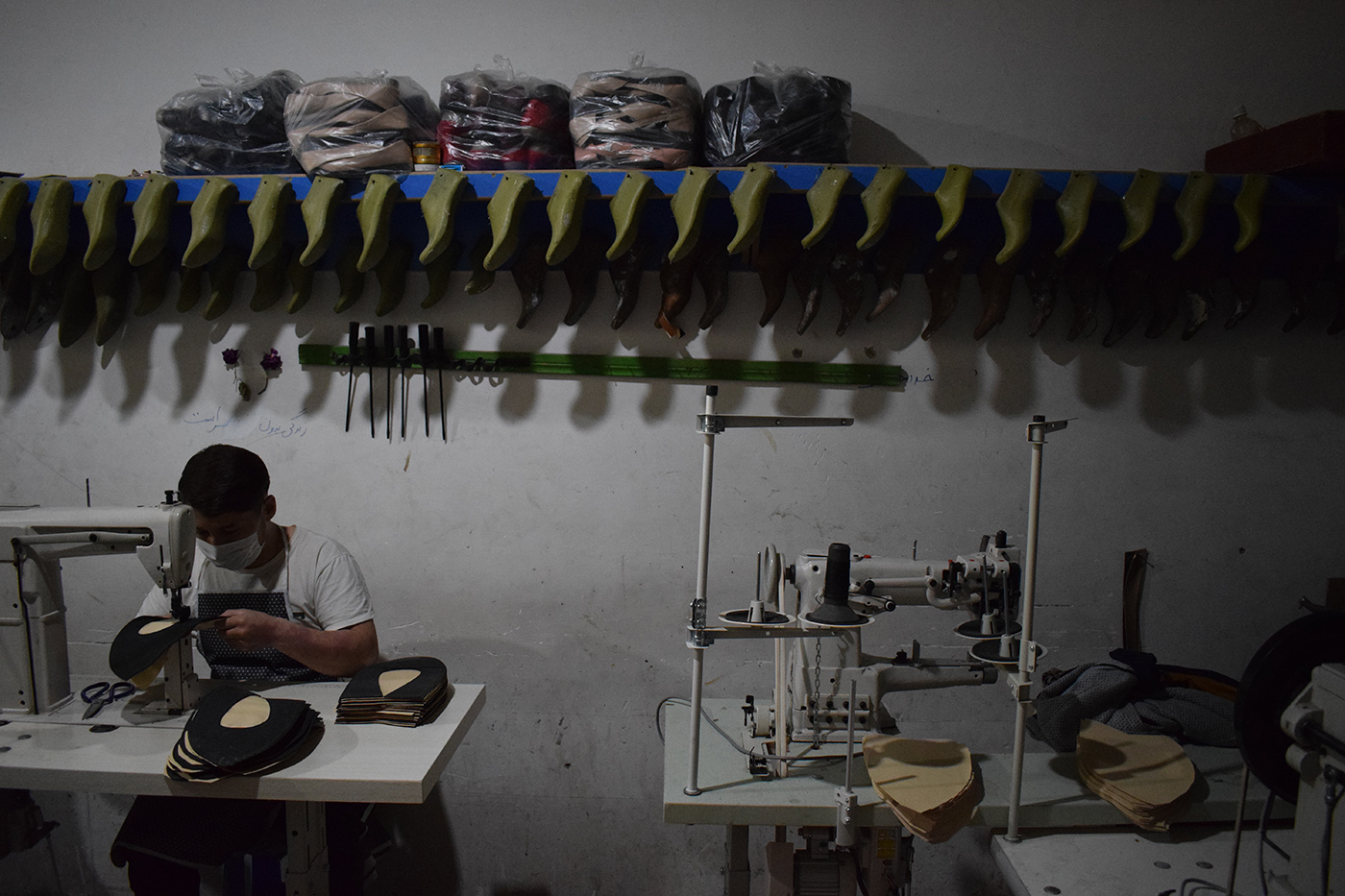 Farhad is delighted to have had the opportunity to learn the art of shoemaking at his new job.

Baahir, 24, had spent two thirds of his life in Iran when the COVID-19 outbreak forced him to consider returning to his homeland. Iran was severely affected by the pandemic and national lockdowns came into effect in February. Baahir,, like many others, lost his job. As a child, he had dropped out of school to work and support his family, and had managed to get by with daily wage as a labourer. Last year, however, the work had dried up and he was forced to return to Afghanistan with his wife and two young sons. At the Islam Qala border, Baahir and his family were supported by IOM and received cash assistance to buy food and medication to meet their immediate needs. “When I [returned], I was unemployed and had no place to live. My brother-in-law offered us shelter and I received support from IOM. It helped me to survive the initial days of my return, but I needed an income to support my family,” says Farhad.

On his return, an IOM Protection caseworker met with Baahir, to assess his situation. Baahir, was glad to also be referred to the RADA programme, which introduced him to the Bashir Ahmad Sediqi Shoe Company. It was the beginning of his journey to learning the art of shoemaking and gaining a stable income to support his family. It was also a big confidence boost: “I am happy with the employment opportunity, especially the skills I am learning on the job,” Baahir, said.

Local businessman Baal wanted to expand his business. IOM found out about Sediqi’s company through the Directorate of Industry and Commerce and established a partnership with the company in March to generate jobs for returnees in Mazar-e-Sharif. 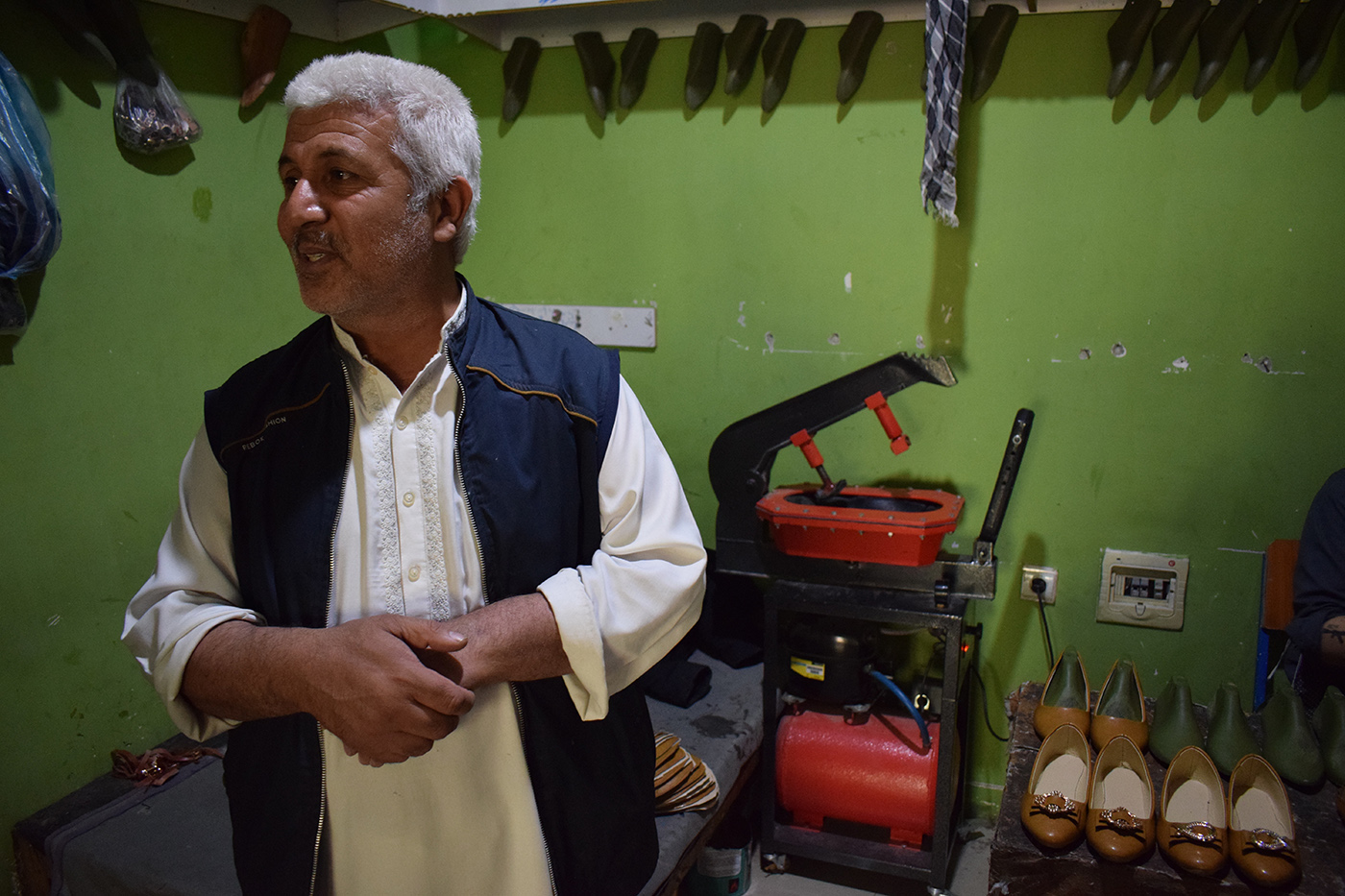 Under the RADA programme, IOM supports existing small and medium-sized enterprises (SME) to address the economic dimension of reintegration in target communities. Since March, Sidiqi has taken on five apprentices referred by IOM. IOM provides businesses with machinery, access to finance, and vocational training, while businesses provide opportunities to train and employ returnees and internally displaced Afghans.

Baal has ambitions of opening new branches of his shoemaking enterprise in other provinces and has already opened a branch in Kunduz province. The company is benefitting from the slowing of commodity flows from neighbouring countries since the pandemic hit. Baal sees an opportunity to sell Afghan-made shoes to the Afghan public. “With the support from IOM, our production has doubled. Our customer base is increasing. Shopkeepers who imported shoes from Iran and Pakistan are now buying from us. There is no reason to buy elsewhere,” he says proudly, describing some of the new business he’s been able to attract. 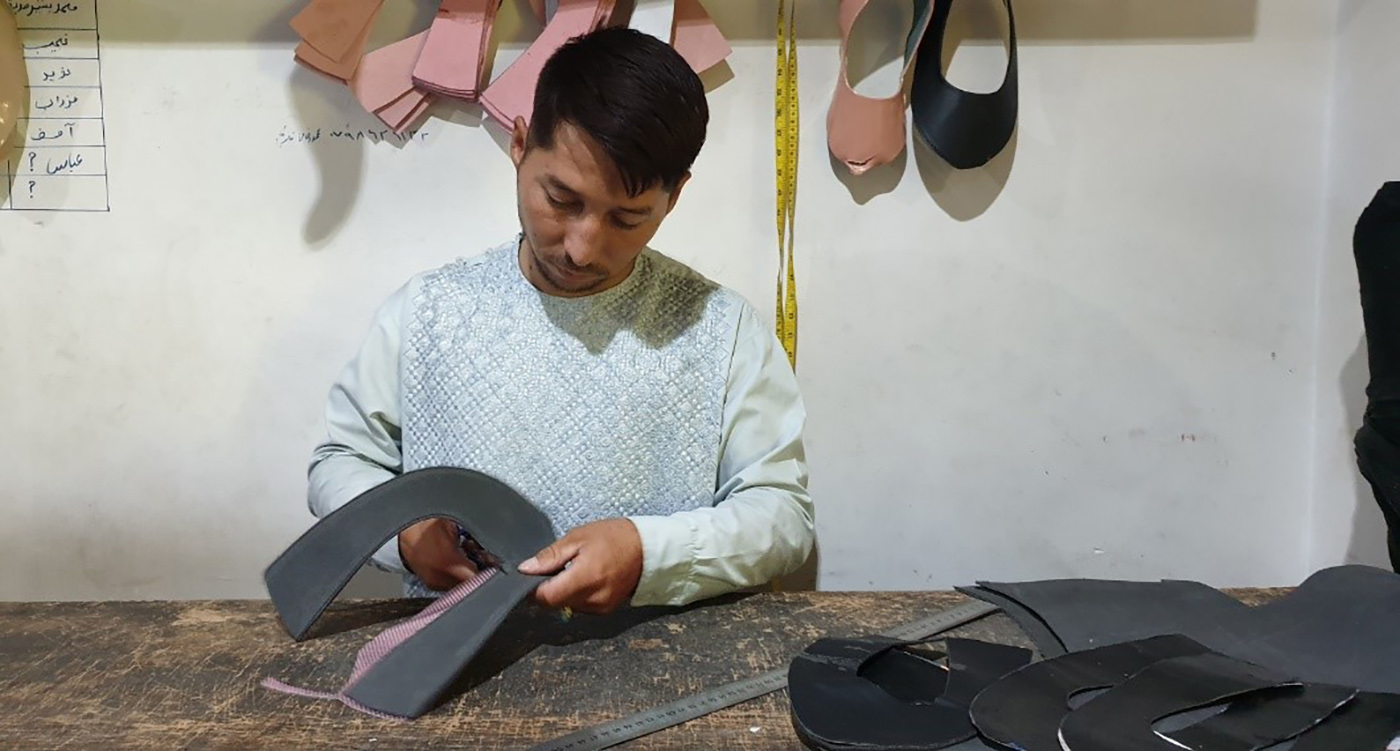 Farhad has learnt 90 per cent of the shoemaking business, according to his manager. He hopes to start his own business one day.

He has identified Baahir as his staff member that he would choose to manage a new branch: “There is even potential to expand to neighbouring provinces…He (Baahir) has learnt 90 per cent of the trade by now.”

Baahir and Maagh, meanwhile, are both learning and earning. They have ambitions of opening their own businesses one day, utilizing the skills they’ve learnt in the shoe trade. With steady incomes, both are on the path to building a sustainable livelihood for themselves and the young families they support. The combination of IOM’s protection assistance and return and reintegration services is enabling both men to put their best ‘clad’ foot forward – supporting safe and dignified journeys of sustainable return.

The names in this story have been changed to preserve privacy.