During the handover ceremony, the two football clubs played a friendly match and the winners received a trophy. Photo: IOM/Rahel Negussie

Hararghe – For Ethiopians like Ahmed, an eighth grader at Bilisuma Primary School, pursuing education in East Hararghe has been agonizing. An outbreak of violent conflict in 2016 led to the disruption of education and schools were damaged.

“I have a very keen interest in finishing my studies. However, I was forced to stop for some time because of a conflict in my town. This created a gap in my academics. It was very frustrating,” Ahmed explained. “Every time it is deemed safe to return to school, I’ve already forgotten what I have learned before classes were interrupted.” 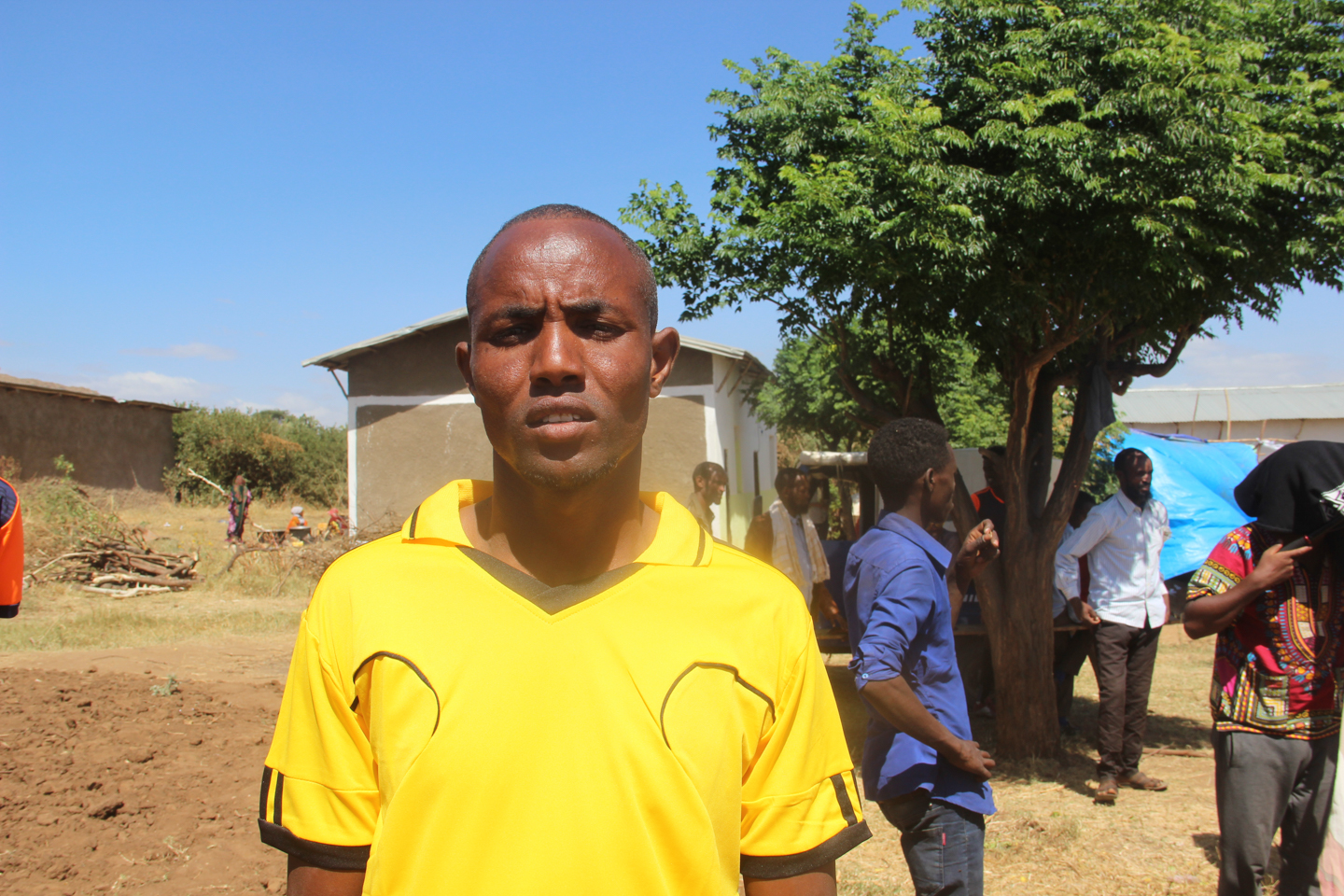 Ahmed, one of the students whose education was put to a halt due to conflict. Photo: IOM/Alemayehu Seifeselassie

East Hararghe Zone borders the Oromia and Somali regions of Ethiopia. A 25-kilometre drive off the main road here takes one to the even more remote district of Gursum, where there is little access to basic facilities. The community in this district witnessed intercommunal conflicts between 2016 to 2018, which destroyed what minimal facilities there were.

Thousands of people were displaced as a result of the conflict while vital facilities such as schools and health posts were damaged. Ahmed is among the hundreds of students in Gursum District whose studies have been affected by these conflicts, one of many whose memories of the conflict still haunt.

“The conflict broke out while class was ongoing. We had to flee! We moved to the mountains carrying what we could,” the young student recalled. “When we returned, we were shocked to find that our school was destroyed beyond recognition and learning materials were all looted. Our houses were destroyed as well.”

Remotely located at the Gursum District in the Oromia Regional State of Ethiopia, the Bilisuma Primary School is the only primary school in the area. The next learning facility is located more than 30 kilometers away. Photo: IOM/Rahel Negussie

With no desks and educational materials, students were learning in an unconducive environment—squatting on stones instead of desks and chairs. Photo: IOM Ethiopia

The International Organization for Migration (IOM) works on promoting social cohesion and supporting communities that have been affected by man-made and natural disasters. In times of conflict, IOM supports communities to rebuild what they have lost and overcome challenges.

Through the United Nations Peacebuilding Fund-supported programme “Inclusive Governance and Conflict Management Support to Ethiopia,” IOM has organized community dialogues, cultural and sports events, and capacity-building training on Conflict Early Warning and Response (CEWAR), among other durable solutions for security and administrative experts. Various peacebuilding and conflict management workshops the organization conducted were the preliminary steps to establish inter- and intra-district taskforces for conflict management and peacebuilding in Ethiopia’s Oromia and Somali regional states.

As part of the programme, IOM rehabilitated schools and social facilities damaged and affected by intercommunal conflicts to provide the much-needed service for the community.

“With the community dialogues between the internally displaced, returnees and host communities, and in consultation with the government, IOM prioritized the areas that would minimize the tension. The communities feared that the basic resources like health posts and schools would be stretched. Hence, IOM intervened to support the infrastructures as a peace dividend,” said Swikriti Bashyal, IOM Ethiopia’s Emergency and Peacebuilding Officer.

Bashyal added: “The Oromia, Somali and Southern Nations, Nationalities and Peoples' (SNNP) Regions were heavily affected by conflict with thousands of people being displaced, and social facilities and livelihoods destroyed, which was extremely saddening.”

Altogether, IOM has rehabilitated 70 schools and two health posts in the regions as a conflict prevention mechanism. In Bilisuma, three blocks were built by IOM while the Oromia and Somali communities came together in solidarity and built the fourth block.

Among other facilities in the region, IOM has reconstructed the Bilisuma Primary School in Gursum District, that was completely damaged by the conflict. The school, which caters to the Oromo and Somali communities in the district, was handed over to the government and the community along with learning materials such as student desks, blackboards, and office furniture. 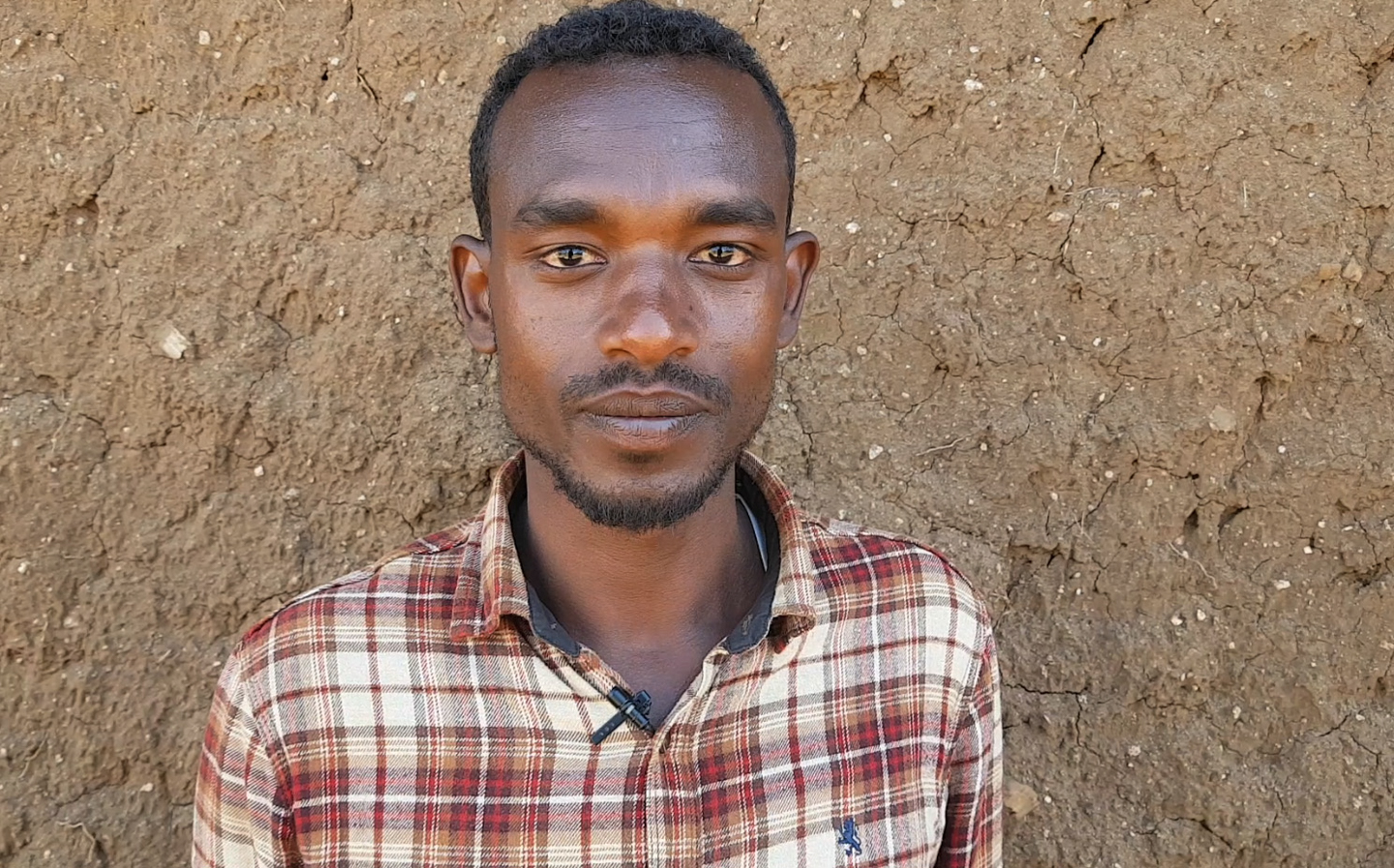 Bahir Ahmed Nure has been the Director of Bilisuma Primary School for the past two years. He explained that the rehabilitation of the school to its current condition has enabled the students to continue with their education.

“The school was not how it looks right now. We have been determined to reconstruct it using mud and straw after we returned. However, it kept cracking and falling apart every month. Students were forced to sit on stones since we have neither chairs nor desks,” he added, reflecting on the community’s desperate attempt to keep the school open. “We did not have enough educational materials. Even the basic textbooks were not available, as parents have lost most of their belongings and couldn’t afford to buy new ones for their children.”

The Bilisuma Primary School is now back in operation. With additional classrooms and the old ones reconstructed, the school can provide service in a much-enhanced capacity.

“Before the reconstruction, children were not eager to show up in school. Now, after IOM’s support, we have to do double shifts due to the number of students who are attending classes in the morning and afternoon,” the director concluded. “After IOM helped us to reconstruct the school and provided learning materials, students are now eager to return and continue their education.”

This block under construction is part of an initiative by the community. The school will be shared by the two ethnic groups previously at odds with each other. The construction of this school is significant as it shows the outcome of the peacebuilding initiative: to promote social cohesion and solidarity.  Photo: IOM/Rahel Negussie

During the handover ceremony, community members from both ethnic groups came together for a celebration filled with dances and cultural foods. It was also attended by the Gursum District officials. 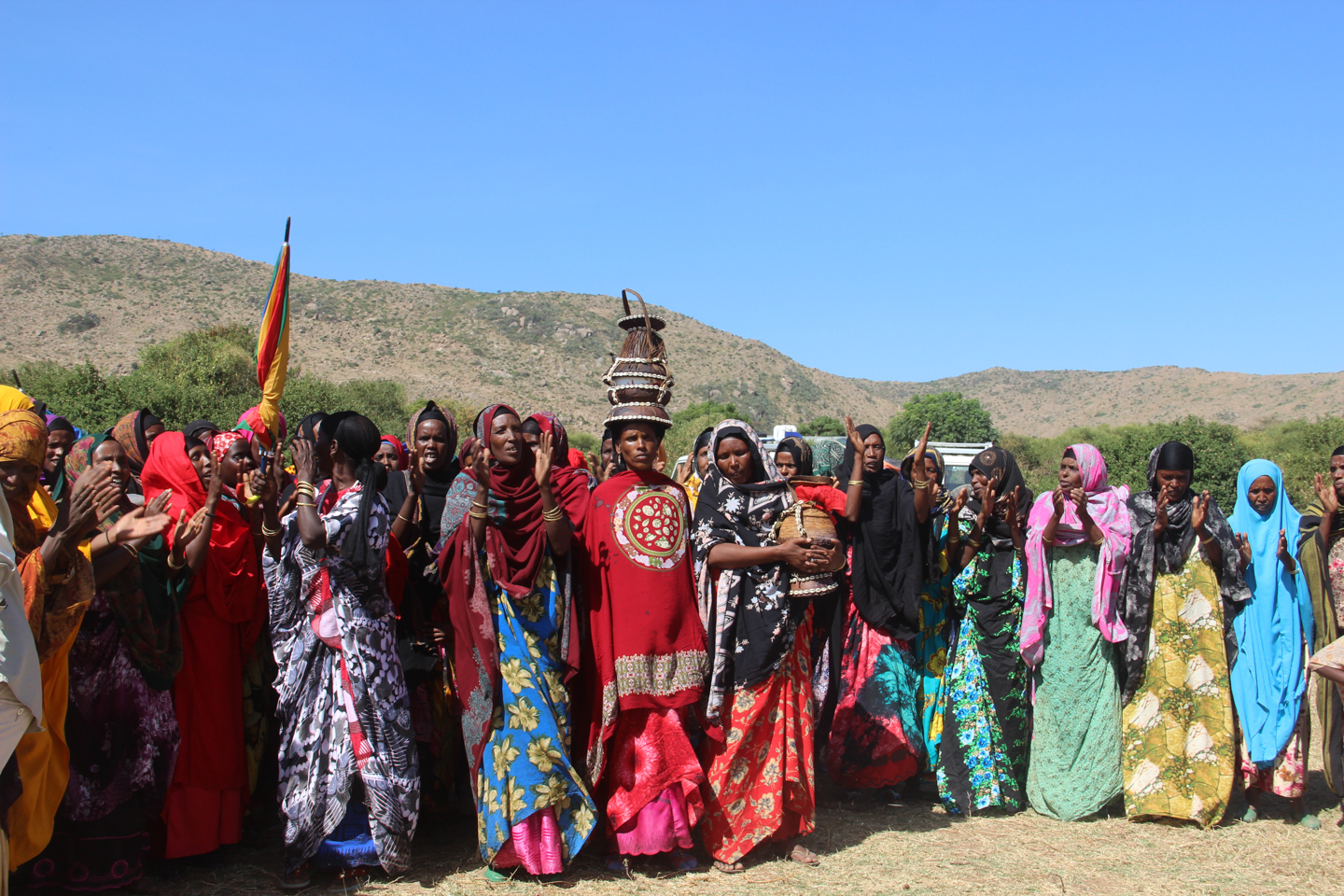 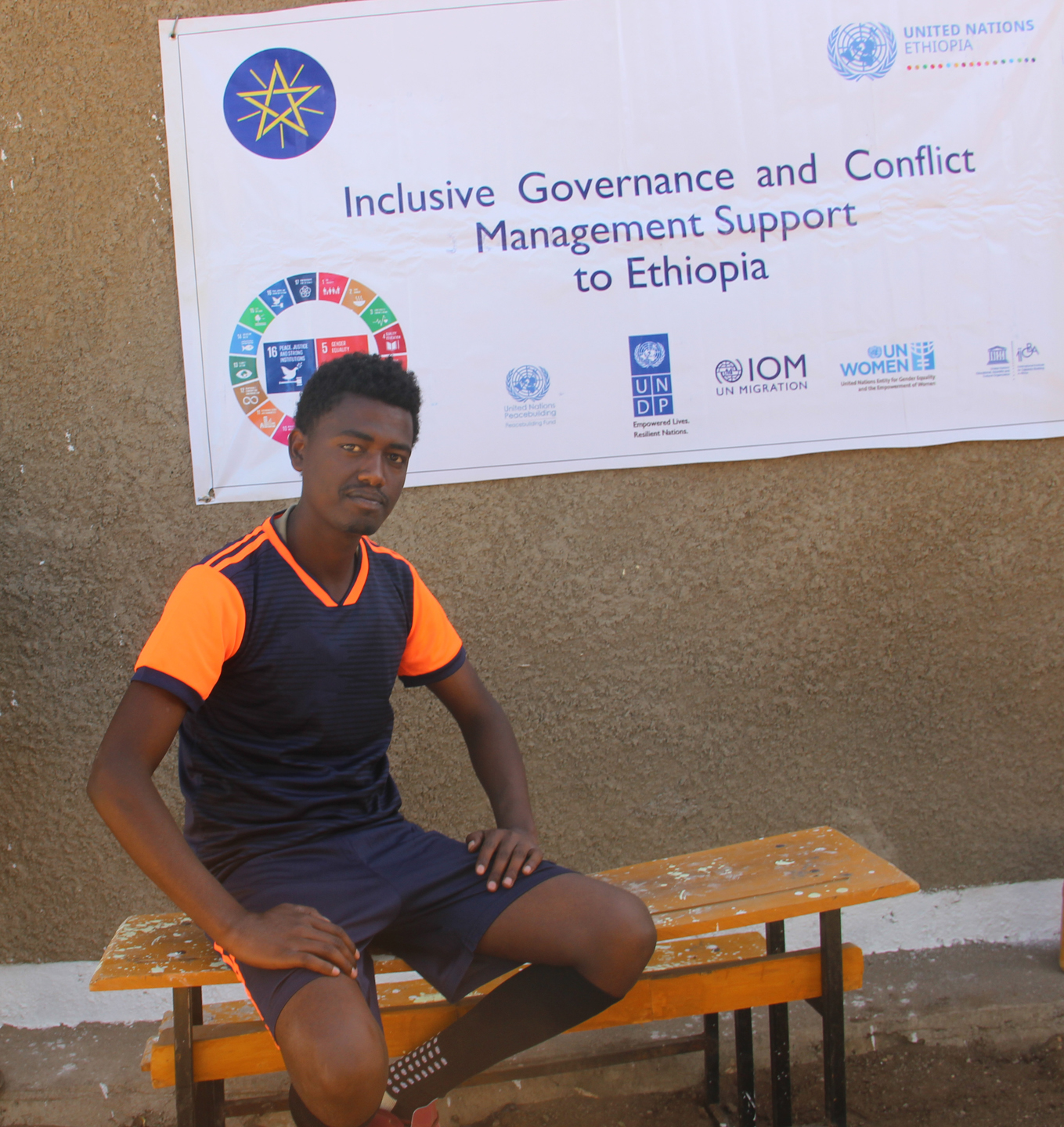 The UN Secretary-General’s Peacebuilding Fund (PBF) is the organization’s financial instrument of first resort to sustain peace in countries with situations at risk or affected by violent conflict. The PBF may invest with UN entities, governments, regional organizations, multilateral banks, national multi-donor trust funds or civil society organizations. From 2006 to 2017, the PBF has allocated USD 772 million to 41 recipient countries. Since inception, 58 member states contributed to the Fund, 33 in the present 2017-2019 Investment Plan. The Fund works across pillars and supports integrated UN responses to fill critical gaps; respond quickly and with flexibility to peacebuilding opportunities; and catalyze processes and resources in a risk-tolerant fashion.

This story was written by Rahel Negussie and Alemayehu Seifeselassie, IOM Ethiopia.