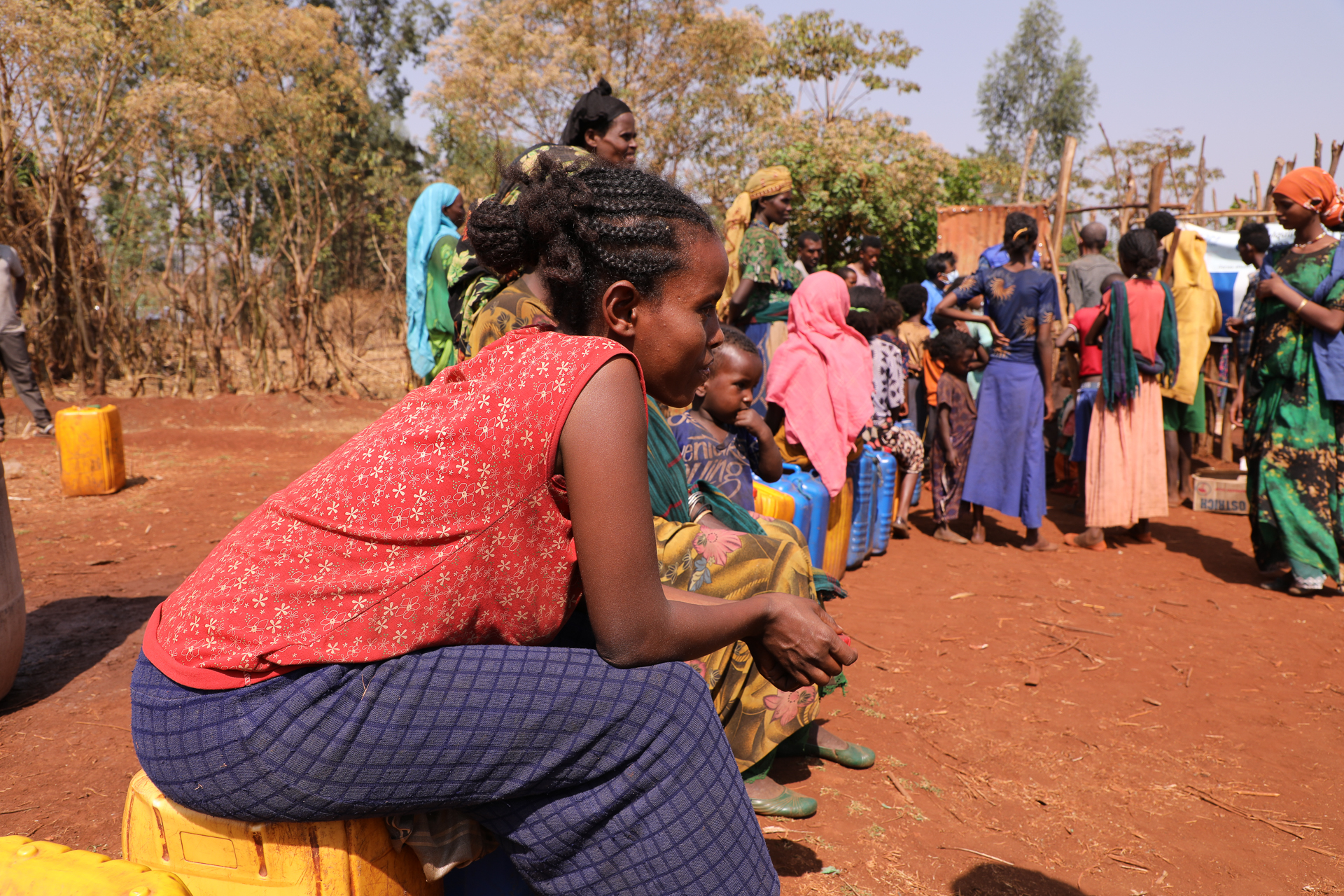 Nekemte, 29 Nov 2021 – Access to clean and safe water remains out of reach for thousands of people in many remote villages in Ethiopia. Families are left with no choice but to drink from polluted water sources, including rivers and shallow ponds often located kilometres away. Districts like Sasiga and Guto Gida in Wollega zone in Oromo region are among the most deprived.

The towns of Kenaf and Amistegna are only about 70 kilometres from Nekemte city’s water reservoir, but thousands of residents have no access to water because delivery infrastructure is missing.

“The closest river is 30 minutes to one-hour walk from our home. Carrying water from the river for such a long distance exposes many women to extreme hardship,” says Amina Osman, a resident of Amistegna town. 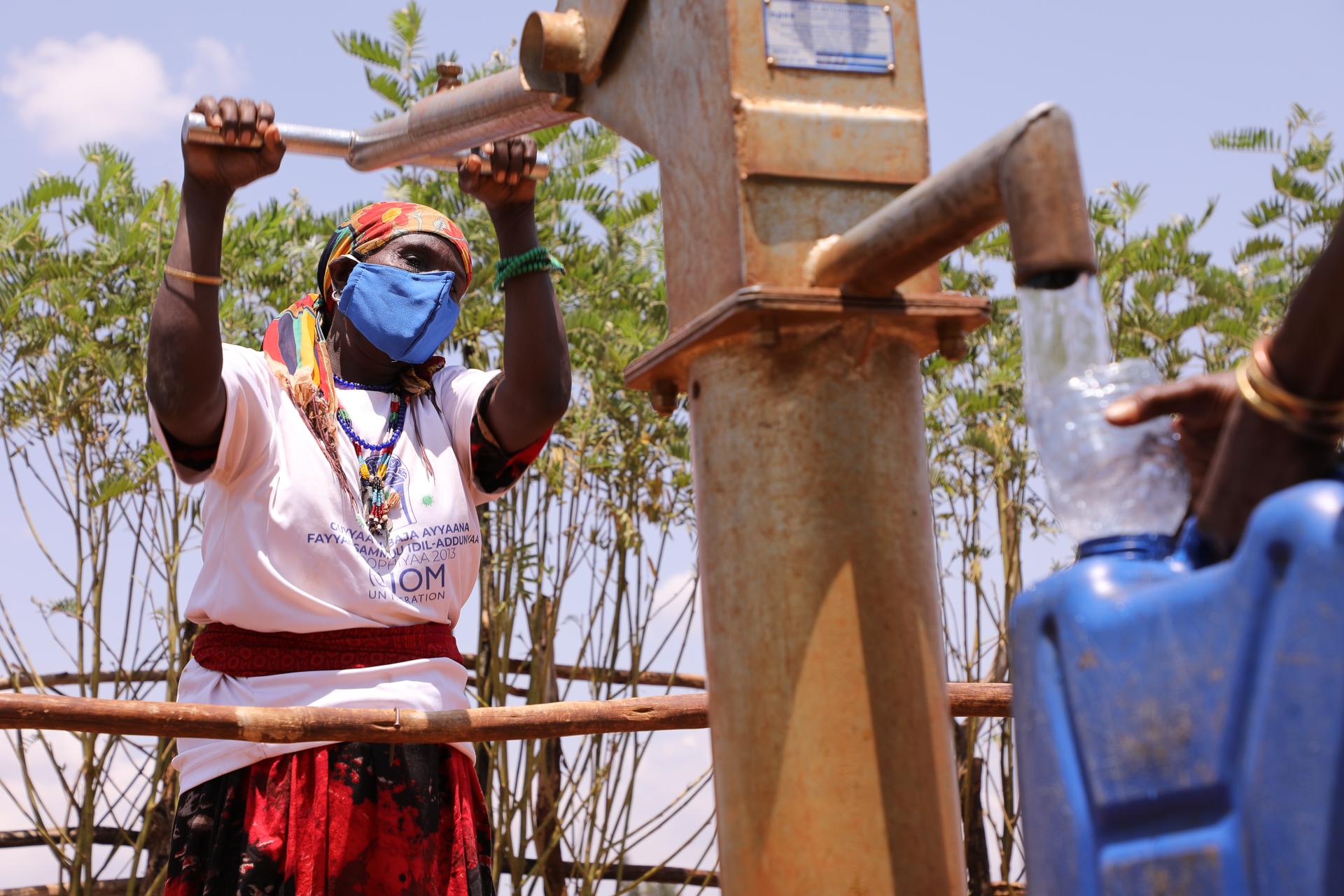 A woman fills her jerricans at a handpump IOM installed to serve households in Amistegna resettlement area for returnees in Wollega, Ethiopia. Photo: Alemayehu Seifeselassie/IOM

In response, the International Organization for Migration (IOM) has installed a handpump in Amistegna town that has helped ease the daily suffering that many women like Amina face.

“This is clean and safe water, and now we can access it day and night without fear as there is always good visibility due to the newly fitted solar light,” says Amina, an elderly mother. 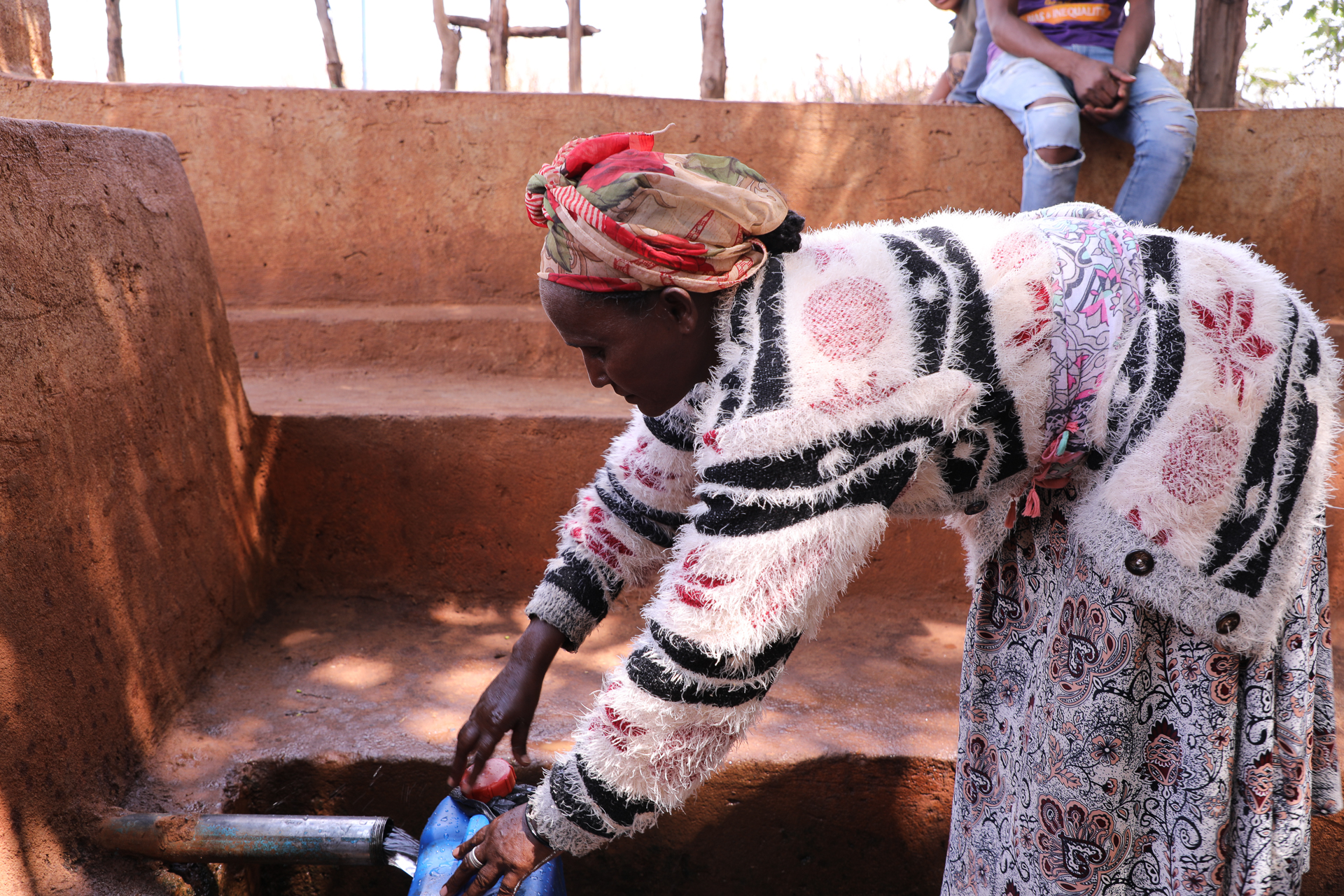 Workenesh Legesse collects water for household use at a protected spring catchment built by IOM in Kenaf.  Photo: Alemayehu Seifeselassie/IOM

For Workenesh Legesse, a mother of four in Sasiga, a new spring catchment is a huge relief. “Our children were suffering from waterborne diseases and accessing water for daily sanitary purposes was a big challenge.''

Mothers like Workenesh and Amina were spending hours every day walking to rivers to fetch water in 20-litre plastic containers they would carry on their backs.

“Due to budget constraints, the government of Ethiopia relies on partners to provide remote villages access to clean water. Many people – who have been at risk of waterborne diseases – are delighted and are now benefitting from IOM’s water schemes,” says Dabala Wagari, a representative of the East Wollega Water and Energy Office.

As well as the construction of water-related projects, IOM is conducting mass hygiene campaigns in the same area that have reached more than 34,000 people since 2019. Another 68,300 people will also benefit from a new hygiene campaign through school awareness programmes, door-to-door visits, public campaigns, and engagement of key stakeholders such as local government officials, religious leaders and health workers. In addition, protective equipment, cleaning materials, and handwashing stations have been distributed for free.

IOM’s school awareness programmes educate students on issues such as COVID-19 prevention and how to use water sparingly. To achieve these goals, IOM teamed up with three theatre groups using dance and theatrical performances as part of the awareness campaign. 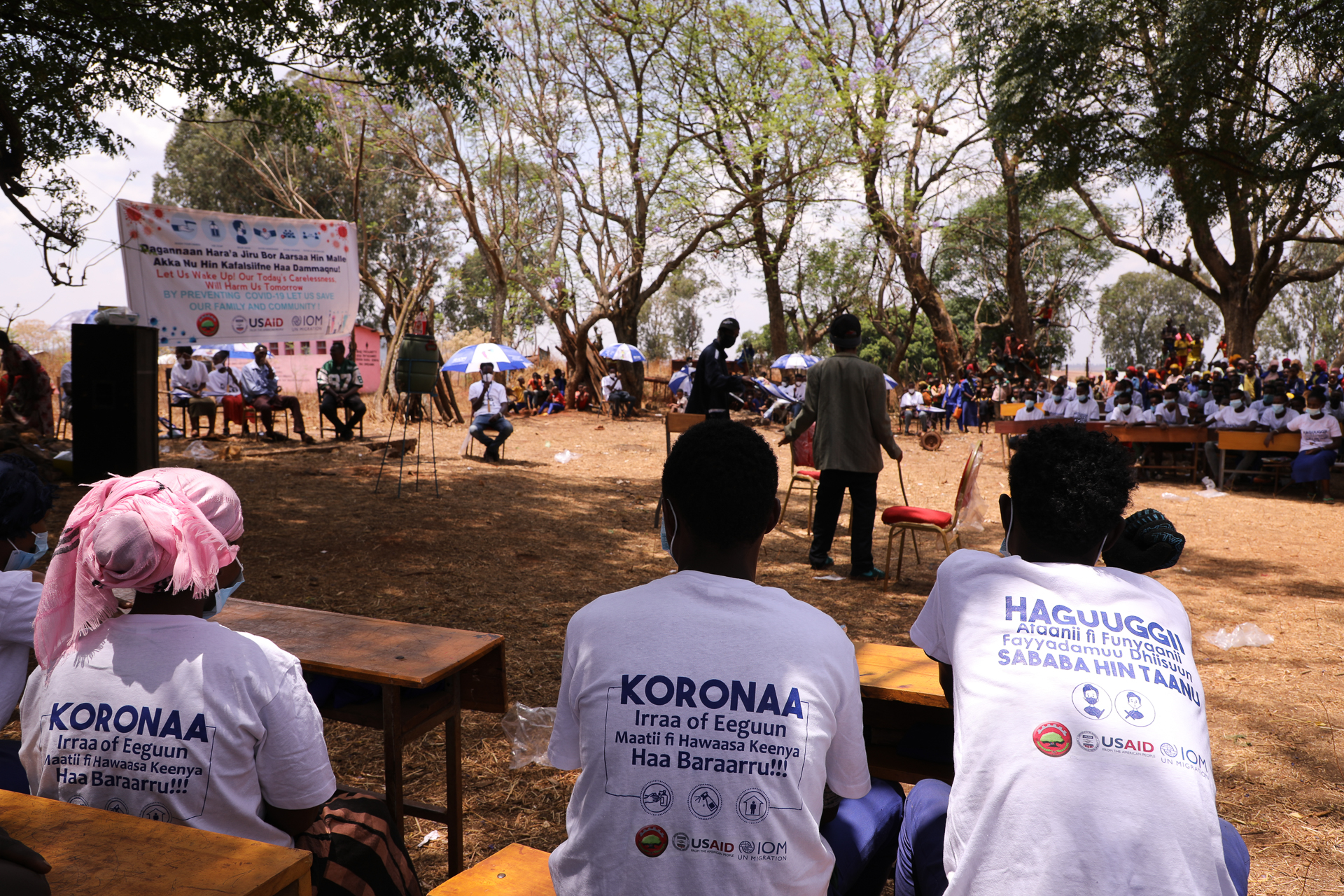 “Such programmes are vital during COVID-19 and when access to water has been more important than ever,” says Karuppiah Vedharaniyam, Head of IOM Wollega Sub-Office.

“We have carried out 17 school campaigns with necessary awareness messages, conducted handwashing demonstrations, underlined the importance of physical distancing, and mobilized stakeholders in East Wollega and West Wollega.” 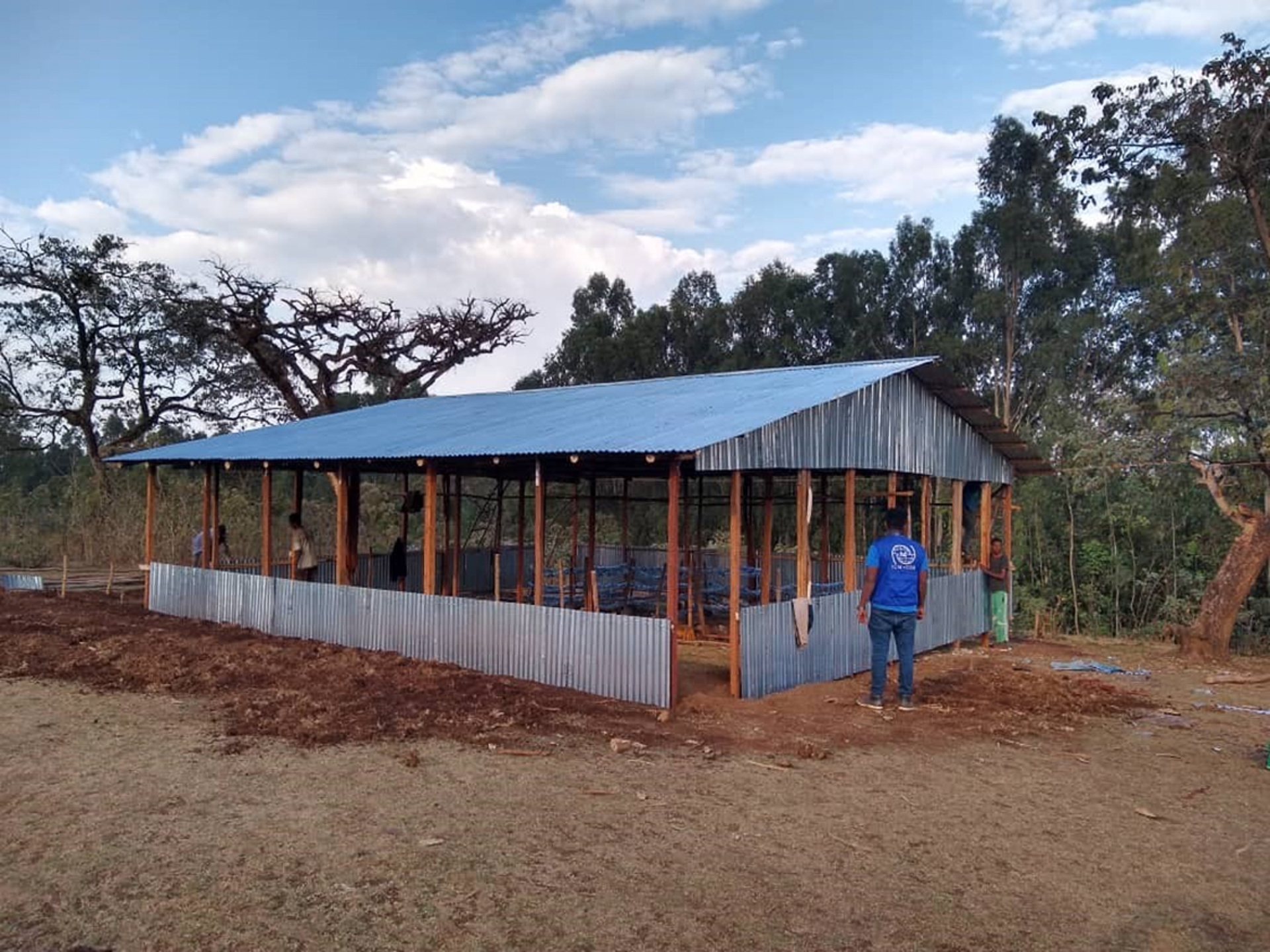 “At our school, the toilet facilities were in urgent need of repair and we lacked facilities such as clean toilets for boys, girls and disabled children,” says Zelalem Adisu, Principal of Kenaf Public School. “After IOM rehabilitation, the latrines have greatly improved hygiene, and female students have privacy and feel safe, although water supply remains a problem.”

What a difference for the students. “If we needed to use the toilet during classes, we had to go back home as the school toilets were not usable,” says 15-year-old Beretu Tinsae.