Returnees in The Gambia Rebuild Their Lives

Against the Backdrop of Tragedy

Archival photo of The Gambia’s coast. One year after the tragic shipwreck, survivors and affected communities in The Gambia continue to mourn and recover. Photo:IOM 2020 / Miko Alazas

On 4 December 2019, at least 62 Gambians perished in a tragic shipwreck off the coast of Mauritania. One year later, we remember and pay tribute to them, while shedding light on the stories of those who survived the tragedy.

With a population of just over 6,000, the town of Barra in The Gambia’s North Bank Region is perched across the capital – separated by the River Gambia’s seven-kilometer opening. By day, it is bustling with movement; people ferrying to and from Banjul, on their way to Senegal or other larger towns in The Gambia’s upper half. Enveloped by the Atlantic waters, most of the town make ends meet through fishing.

By night, once the last ferry to Banjul departs, a peaceful silence surrounds the town – a silence that would eventually become the setting of the country’s most fatal irregular migration tragedy in recent memory.

The town of Barra serves as a key transit hub between The Gambia and Senegal. Photo: IOM 2020 / Miko Alazas

Sheikul Hairy Joof takes us back to November 2019, when rumblings of boats preparing to depart for the Canary Islands started. “Around town, we started to hear rumors of a boat going to Spain,” he says. This route had been active in the country years ago but faded as Gambians began heading to Libya.

An 18-year-old senior year student at the time, Sheikul saw an opportunity to better the lives of his parents and eight siblings. Having saved some money catching and selling fish part-time, he made the decision to go, with his father’s blessing.

At two in the morning on 27 November, Sheikul headed to the waters with over a dozen of his friends and neighbors, joining almost 200 on what they all thought would be a few days’ journey to Europe.

“The first four days were okay, but on the fifth day, there was no more food,” he explains. “For three straight days, I did not eat. I only had water, and I didn’t sleep much,” Sheikul describes of the scenes immediately after departure. With little in sight after eight days of navigation, the passengers decided to dock in Mauritania, where one ill-timed decision led to the tragedy. 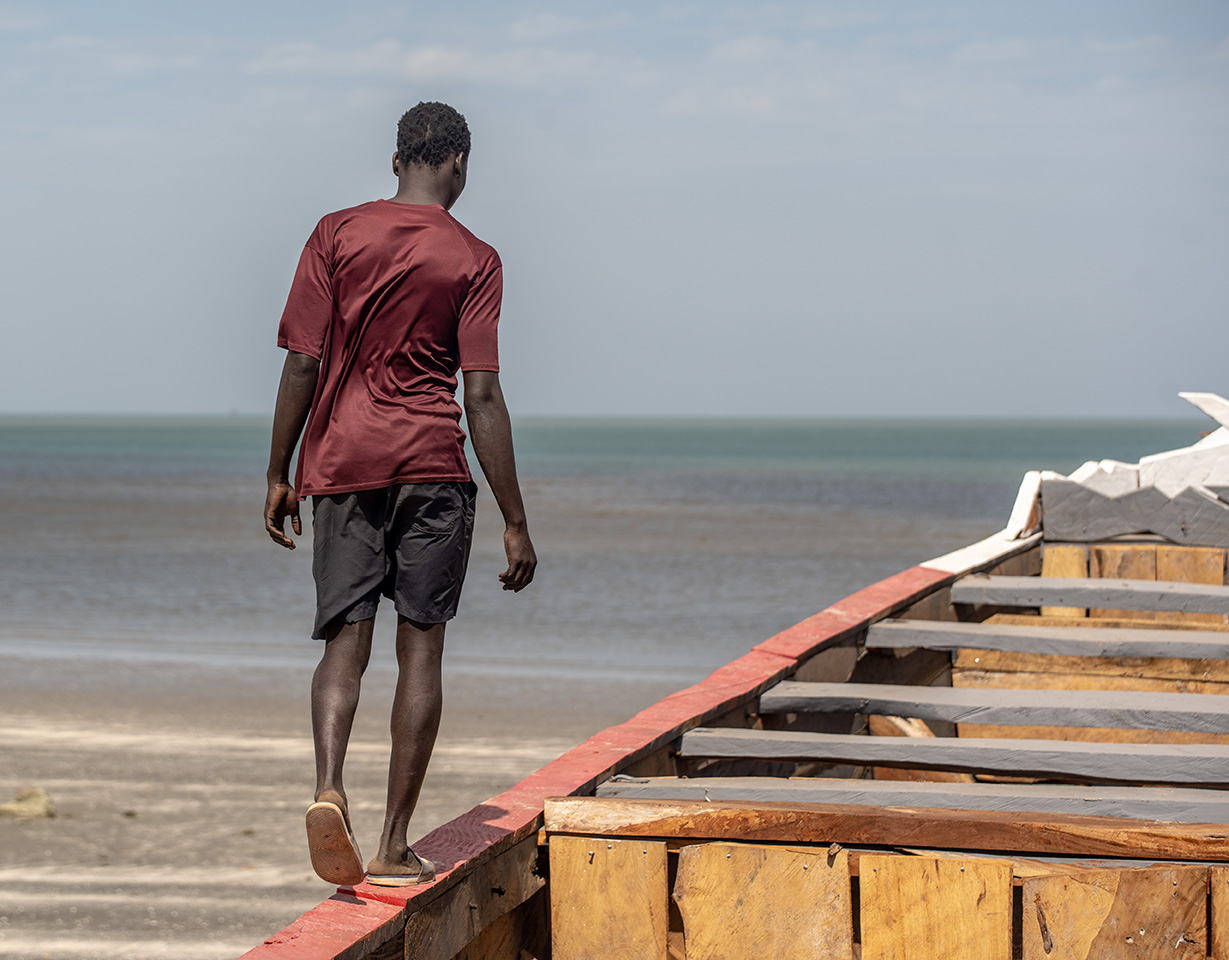 Sheikulnarrates his experience whileon an empty boat, similar in size to the one he was on. © IOM 2020 / Alessandro Lira

“There were a lot of rocks, and the waves were big. We were heading toward the shore when somebody threw the anchor around 25-30 meters away,” remembers Sheikul. “When the boat stopped, a big wave hit, which led to the boat capsizing. We were supposed to hit the shore.”

As Sheikul describes, many were unfortunately trapped inside the boat already in life jackets, while others in heavy clothes were unable to swim. He considers himself fortunate to have escaped, crawling and clinging on to rocks despite the battering waves.

After a few days of receiving immediate assistance in Nouadhibou, Mauritania, the survivors returned to The Gambia – commencing a path to individual and collective mourning and recovery that continues to this day. 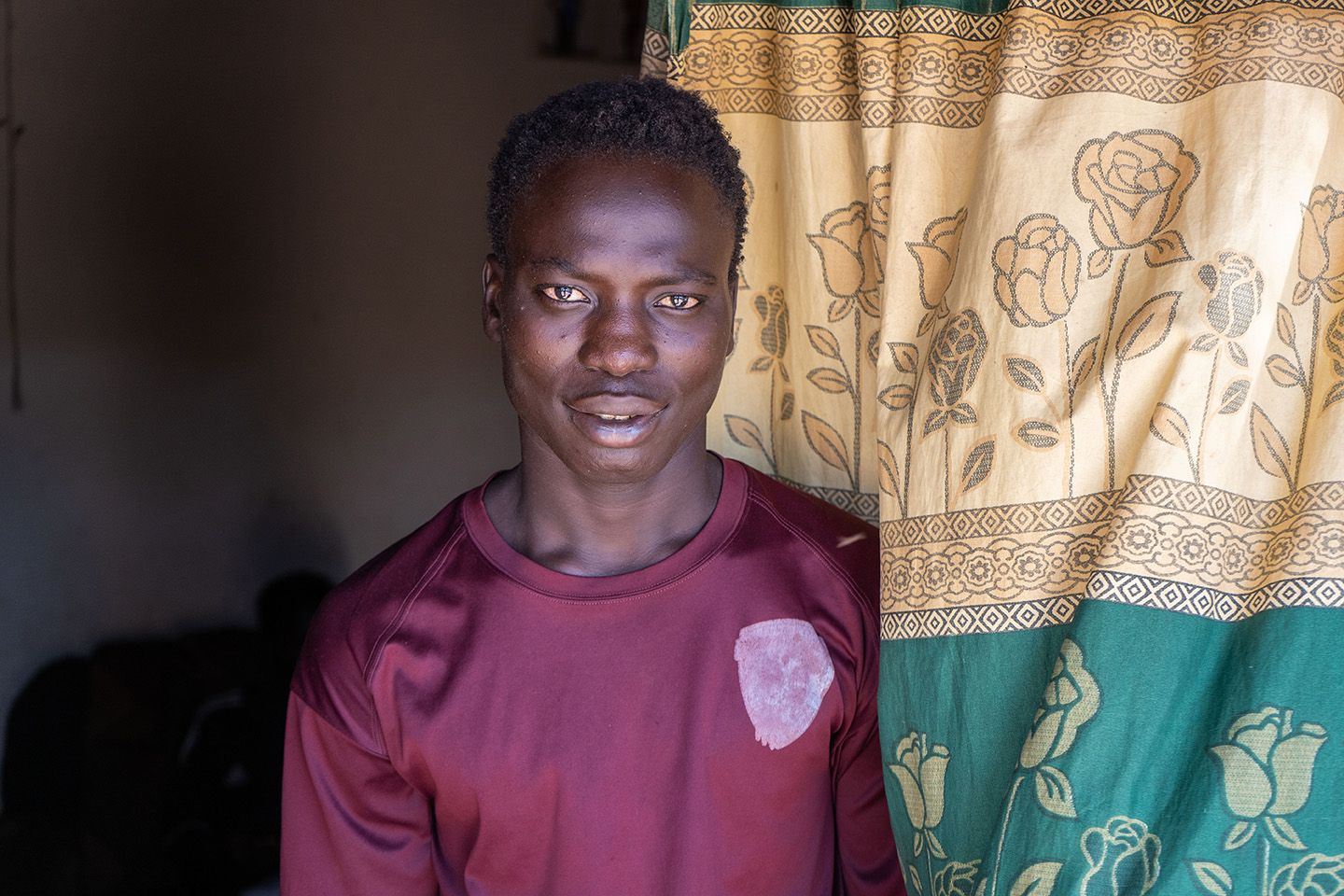 For a town accustomed to the daily routine of fishing and watching travelers come and go, news of the shipwreck devastated the town. “When we first heard rumors of the boat capsizing, there was crying and shouting everywhere. It was terrible,” recounts Sheikul’s father.

On the other hand, Sheikul returned with mixed feelings. “I was happy I was alive, but many of my close friends died. Our minds were all on those we left behind.” Discussion – and mourning – had taken over the country in the subsequent weeks. “It would take our mind back to it. At night, it was hard to sleep.”

Enhancing community-based psychosocial support has since been a key focus of the International Organization for Migration (IOM)’s work in the affected communities.

Over a year later, Barra’s social fabric, as well as of surrounding towns, remains heavily impacted by the tragedy. Sheikul graduated from high school in September 2020 and now dreams of studying hotel management. Despite his father falling ill and feeling as though his life has remained the same, Sheikul firmly states he would never embark on the trip again.

Sheikul has since joined D419 – an association composed of survivors of the capsized boat and returnees from another boat intercepted in Mauritanian waters a few days after the shipwreck. Named after the day of the shipwreck, 4 December 2019, the association holds two objectives: to honor the memory of those who perished and to raise awareness on what they went through. 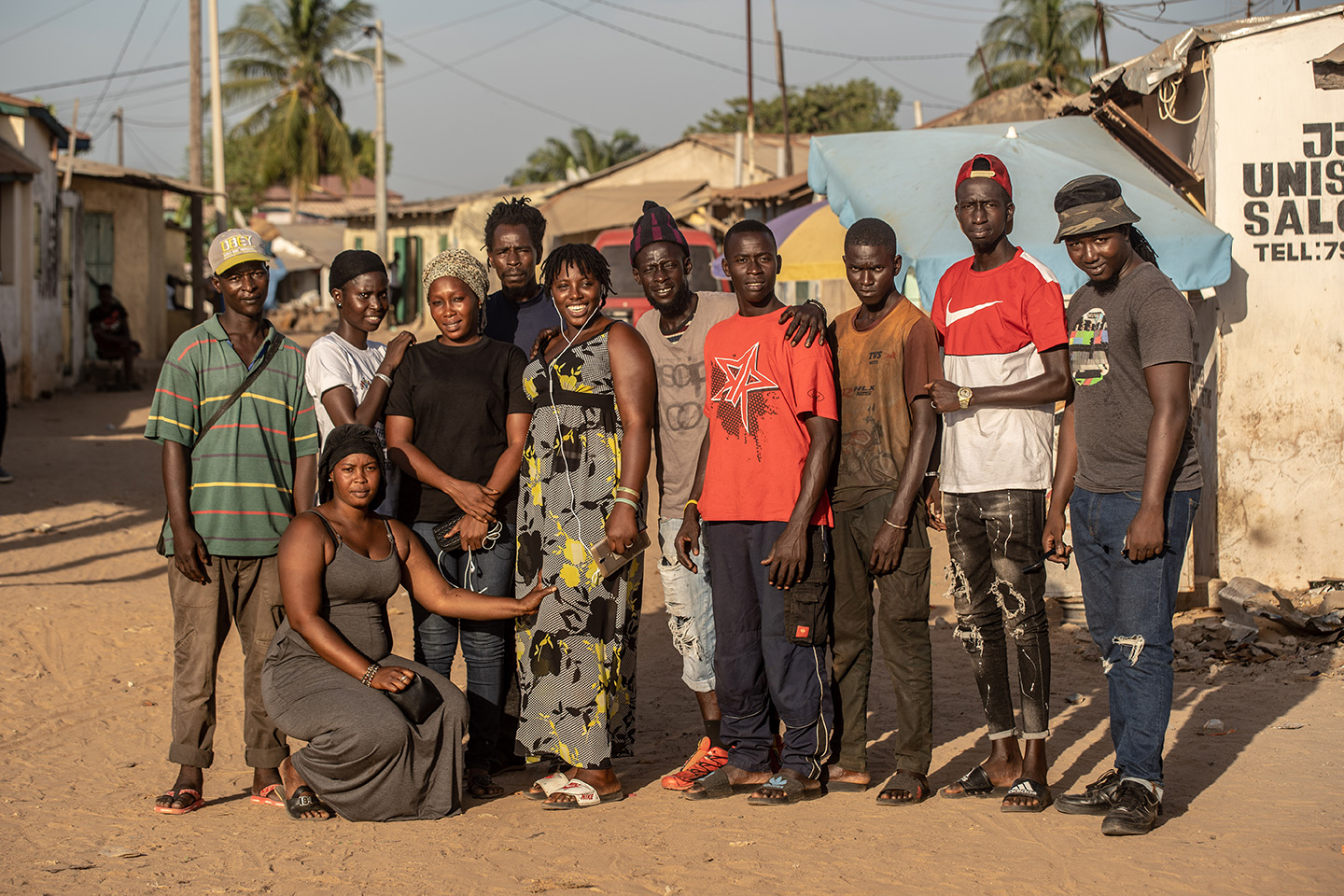 Survivors and returnees have come together to form an association named D419. Photo:IOM 2020 / Alessandro Lira

Other members share similar experiences of struggle and grief upon return. “I heard my little brother calling my name until he drowned. I will never forget that,” expresses Mahmud Faal.

“People were calling me a witch when I came back, because I was one of the few female survivors,” remarks Fatou Sonko – reflecting the stigma some faced in their own communities.

On the anniversary of the shipwreck, the association led the town’s ‘Remembrance Day’, including through a training on psychosocial support, a parade and a series of community discussions. With pooled resources, the association printed shirts bearing a collage of photos of all the victims.

One of D419’s founders and most active members, Mahmud Faal hopes to continue sharing his experience with others. © IOM 2020 / Alessandro Lira

Yet, as the affected communities begin to heal, they have not been spared by COVID-19’s impact on livelihoods. Public health measures, such as restricted market hours and school closures, have made life more difficult, the survivors say. Indeed, this year marked a significant uptick in departures from West Africa to the Canary Islands, mostly from Senegal. Over 500 deaths have been recorded, compared to 210 in 2019.

Like Sheikul, some of the survivors remain steadfast that they would never take the journey again. Others candidly admit that the thought has crossed their mind – weighing the horrors of what they went through against what they perceive as a lack of alternatives. All, however, agree that greater investment in education, employment and entrepreneurship opportunities is what would make youth think twice before departing on the risky route. 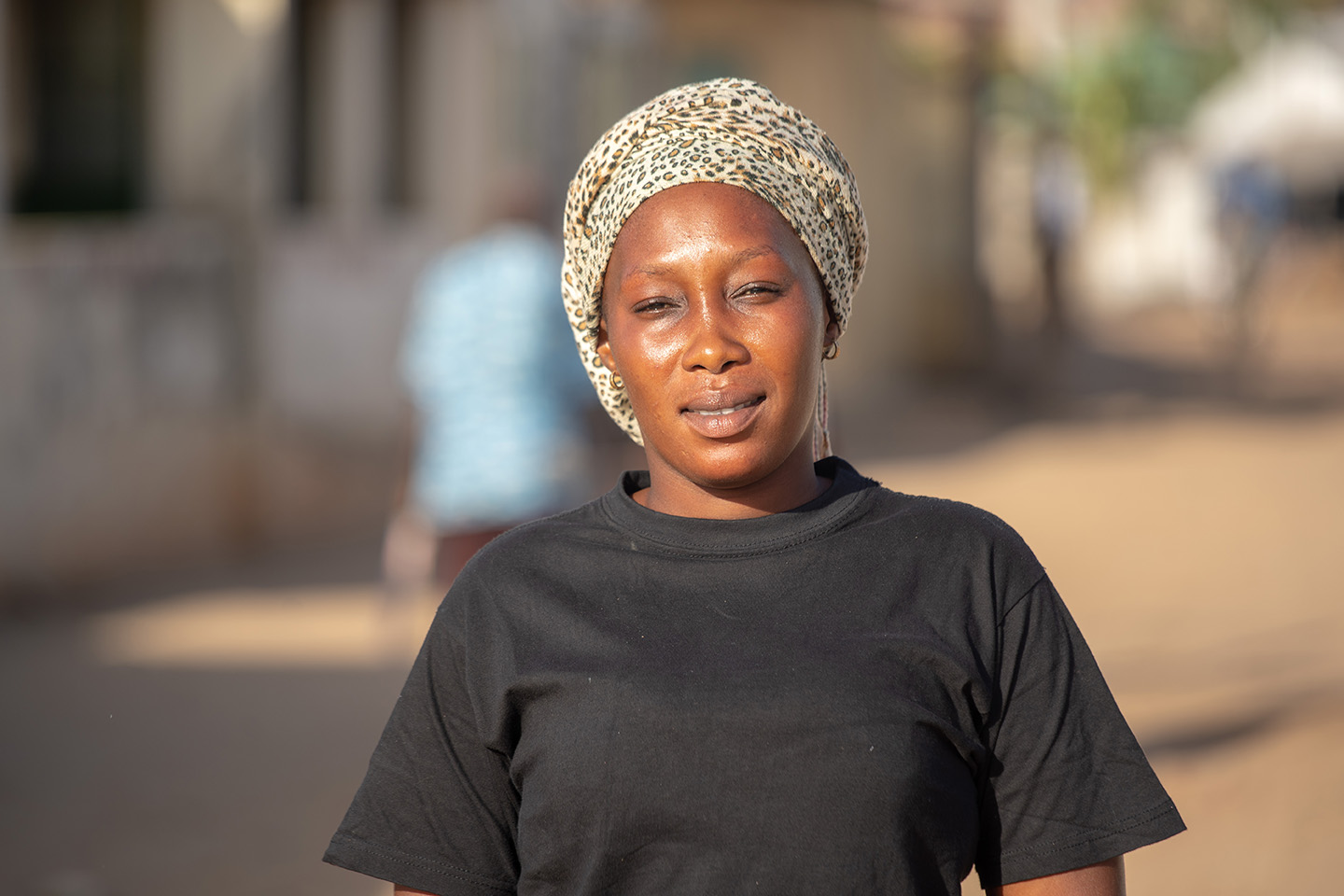 Based on her experiences, Fatou Sonko calls for others to join the fight against stigma and discrimination. © IOM 2020 / Alessandro Lira

Currently, IOM is working with village leaders to develop community reintegration projects for the survivors and returnees. “The challenge now is to bring everyone together to agree on a common vision for a community project that benefits all,” explains Hayib Gaye, Regional Youth Officer at the Migration Information Center (MIC) in Barra. Set up by IOM and the National Youth Council in the aftermath of the shipwreck, the center aims to empower youth to make informed migration decisions.

In line with the survivors’ call for meaningful opportunities, the tragedy speaks to a larger discussion on the global governance of migration. “What last year’s tragedy and this year’s departures show us is that there is an urgent need to expand pathways for safe, orderly and regular migration, which requires strong international cooperation and commitment,” says Fumiko Nagano, IOM Chief of Mission in The Gambia. “Through realistic alternatives, we could more effectively dissuade potential migrants from risking their lives on such dangerous journeys.” 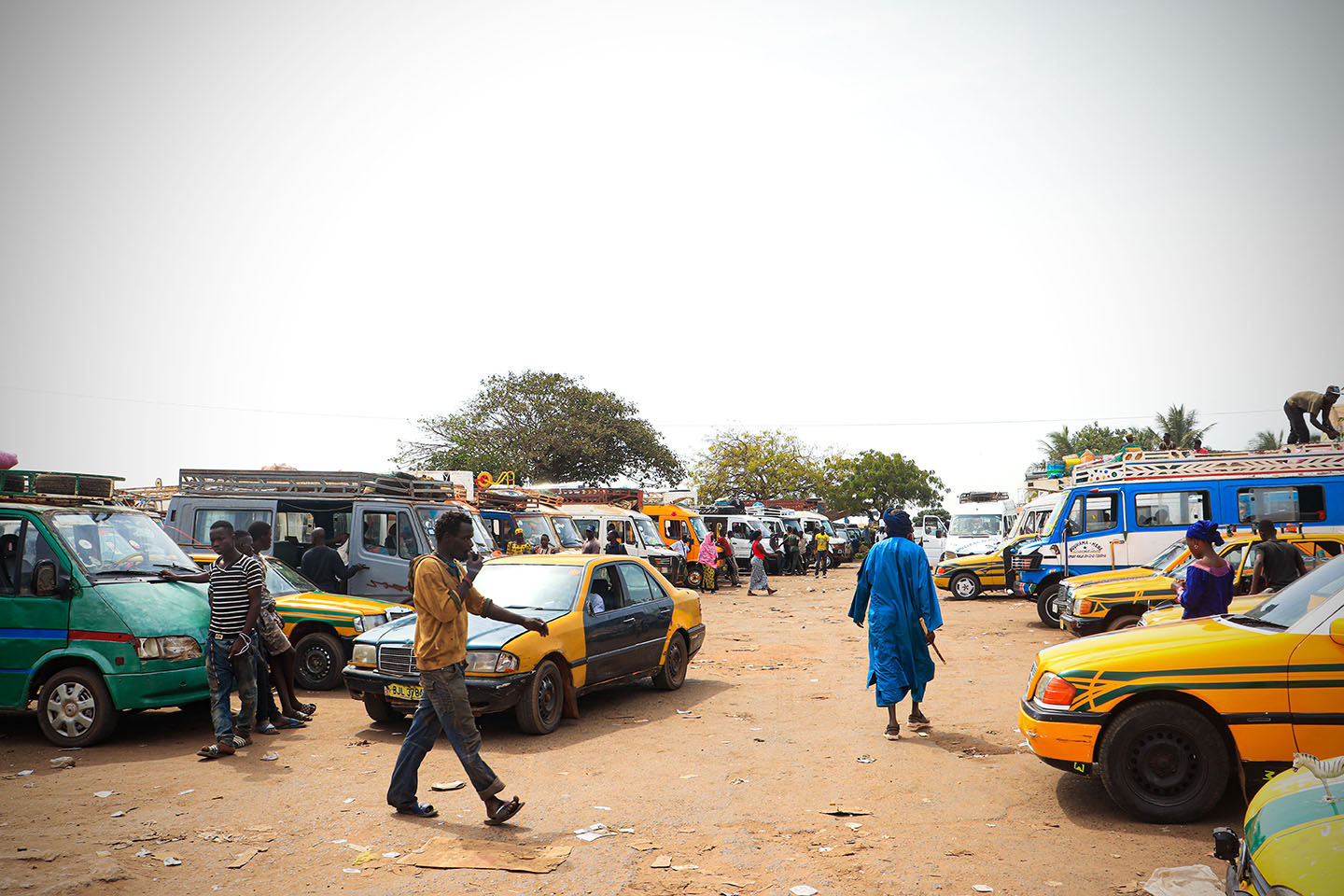 With the Gambian-Senegalese border reopened, life in Barra is slowly going back to normal. Photo:IOM 2020 / Miko Alazas

As COVID-19 restrictions in The Gambia loosen and Barra comes back to life as a busy transit town, survivors begin to see a glimmer of hope. Hope that things improve. Hope that income-generating opportunities in the town grow. Hope that commemorating their perished brothers and sisters will not be in vain.

“We need to start afresh, develop ourselves and capitalize on any support we get,” expresses one returnee from the intercepted boat, as he looks toward the future.

In this glimmer of hope, the townspeople of Barra start fostering the seeds to prevent others from losing their lives at sea.

IOM’s support to the survivors, returnees and affected communities includes:

This story was written by Miko Alazas, IOM’s Media and Communications Officer in The Gambia.