Obock, 7 Oct 2021 – After risking his life to return home from Yemen, Kofi* arrived on the shores of Djibouti looking deeply confused and agitated. Unable to speak coherently, he appeared to be unaware of his surroundings and simply walked around in a daze.

At just 20 years old, the young Ethiopian migrant had planned to reach the Kingdom of Saudi Arabia (KSA) in search of work. However, his hopes were dashed when COVID-19-related border restrictions prevented him from reaching his destination. Instead, he became stranded in Yemen, where his mental state declined.  He wanted to return home to Ethiopia and crossed the Gulf of Aden in a boat controlled by smugglers to reach the Horn of Africa.

On the shores of the Red Sea and the Gulf of Aden, and close to Somalia and Ethiopia, Djibouti is an important crossing point for migrants from the region. Like Kofi, thousands of migrants each year pass through the so-called “Eastern route” via the Gulf of Aden in search of better economic opportunities in Gulf countries, particularly KSA.

According to IOM's report “A Region on the Move”, by the end of 2020, more than 400 migrants were stranded on average per month in Somalia and Djibouti, and an estimated 32,700 were stranded in Yemen. In Yemen, migrants have extremely limited access to shelter, health care, food and water and are subjected to human rights abuses, including kidnapping, exploitation, and arbitrary detention. These risks existed before the pandemic but have been rising over the past 18 months as the crisis compounds inequalities.

With few options to return home, migrants along this route often contact smugglers for the sea crossing back to Djibouti and Somalia without any guarantee of safe arrival. Smugglers use small, unseaworthy and overcrowded boats that can easily capsize. Occasionally, some throw migrants overboard to reduce the weight. Between May 2020 and August 2021, more than 15,000 migrants arrived in Djibouti from Yemen, according to IOM’s Displacement Tracking Matrix. However, this figure does not include those who died along the way.

On the beach in Obock, Djibouti, IOM’s mobile medical unit approached Kofi and the small group of migrants who had travelled from Yemen with him. The mobile team gave them first aid as well as food and water, but Kofi’s mental and physical state meant he needed evacuation to IOM’s migrant response centre (MRC) further inland.

Volleyball is valuable therapy for migrants at the MRC. Photo: IOM/Alexander Bee

Moussa Ali, IOM Psychosocial Assistant, recalls Kofi was “incoherent when he spoke, and having trouble situating himself in space and time.” Kofi lacked confidence in himself and in others, often misinterpreting their behaviour and intentions. In group settings he remained isolated and hypervigilant, and reported feelings of oppression.

Over time, with MRC staff help, Kofi changed. For IOM nurse Moussa Isse, listening to Kofi and allowing him to express himself freely established trust. From the security guards at the front door, to the kitchen staff working inside, the MRC team helped bring Kofi out of his traumatized state and he began to make friends.

Kofi, like all migrants at the MRC, benefited from a variety of recreational activities to help support their mental health and recovery. In addition, women are introduced to traditional basket-weaving to equip them with skills for when they return home. In August 2021, 92 recreational activities were organized for MRC residents. To complement this, 64 migrants had individual discussions with IOM mental health staff and 92 migrants participated in discussion groups, which allow them to express the difficulties on their journey and any fears about returning home.

A game of chess takes minds off the past. Photo: IOM/Alexander Bee

Moussa Ali says raising awareness on the mental health of arriving migrants must continue. “The stigmatization of people suffering from mental health issues is a major problem which all governmental and international actors should address. This is even more critical for migrants who lack the social and economic support that would otherwise be necessary to their recovery.”

Thanks to the MRC’s support, Kofi began to express his emotions and continued to make significant strides in his recovery. He even asked to style his hair “in order to be presentable.”

On the eve of his departure, after several weeks at the MRC, all agreed Kofi had made a dramatic recovery from the consequences of negative experiences. 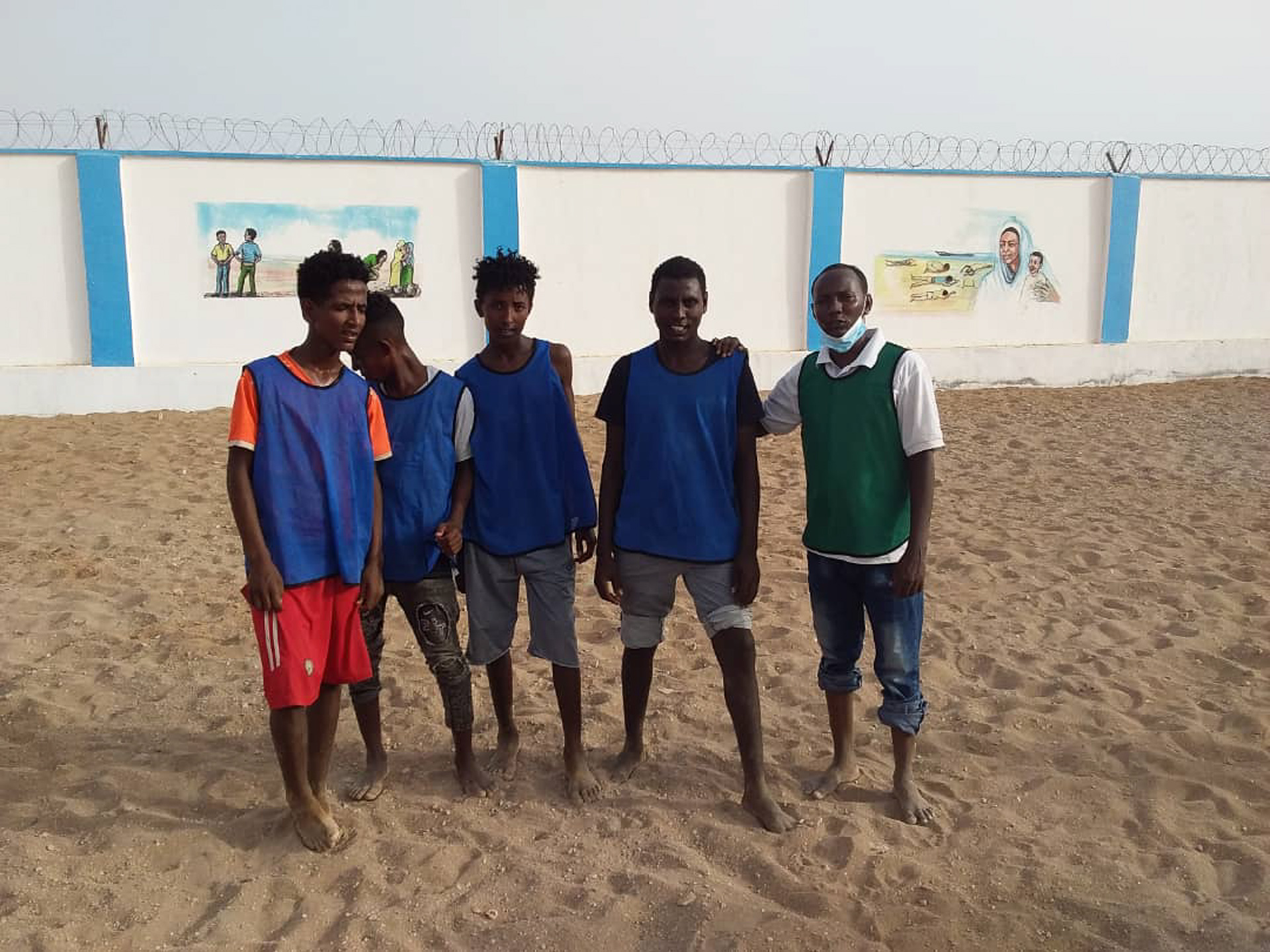 Kofi with some of his friends at the IOM-managed MRC in Obock. Photo: IOM/Alexander Bee

“The success of the support is ultimately the result of the work of a trained and united team, and Kofi’s joy during his departure from the MRC testifies to this success,” says Ali.

In collaboration with governments and humanitarian partners, IOM in Djibouti continues to address the humanitarian, human rights, safety and security challenges faced by migrants in the region. Between January 2020 and August 2021, over 4,500 migrants have been welcomed at the MRC in Obock and received support ranging from family tracing, assisted voluntary return, mental health and psychosocial support, and beyond. Thanks to these efforts, migrants like Kofi are able to safely return home to start rebuilding their lives.