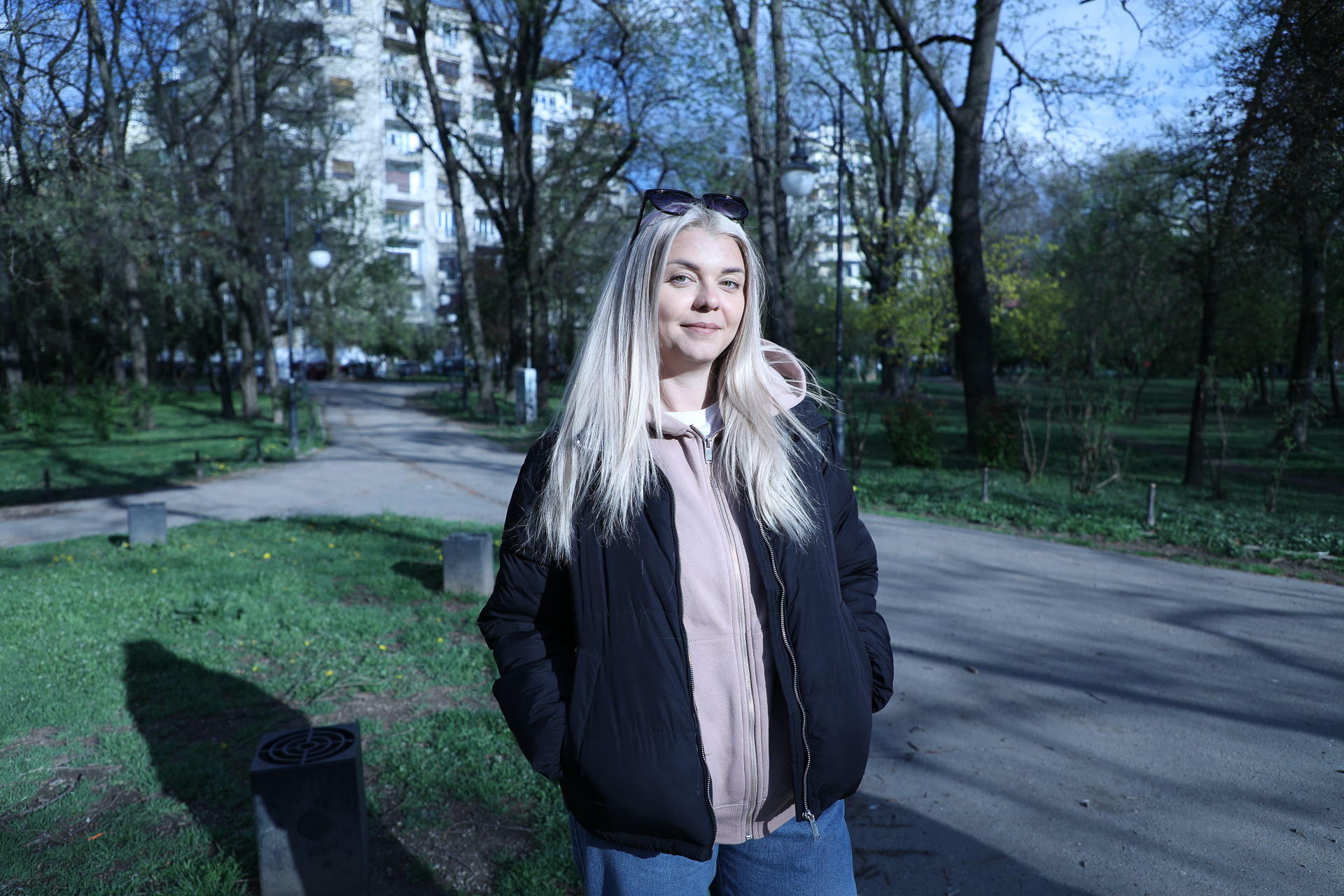 Alina is staying in an Airbnb in Bucharest as she waits for her visa for Canada. Photo: IOM/Monica Chiriac

Bucharest, 10 May 2022 – When the war broke out, 30-year-old Alina packed a small backpack and went to Izmail, a four-hour drive from Odessa, together with her sister, brother-in-law, and niece. With the friends hosting them, they were 11 adults and children staying in one house, along with 15 cats and dogs.

Her friends and family all had different suggestions about where to go from Izmail. Some thought about joining their friends in Italy, while others, like her sister, could not even bear the thought of leaving their spouses behind.

For some, like her mother, leaving was never an option. Somewhere in the outskirts of Odessa, Alina’s mom is tending to her roses. “She gets on with life and tries to make the best of her days.”

Many young people like Alina who are fleeing the war in Ukraine and have no dependents have had their lives upended too. They are now faced with the prospect of starting over completely alone, somewhere entirely new, which may be a terrifying thought for many.

As the weeks in the house in Izmail went by, Alina pondered what to do and where to go. A month into the war, she realized that she couldn’t go back to Odessa, but she couldn’t remain in Izmail either. She needed to leave Ukraine – and fast. 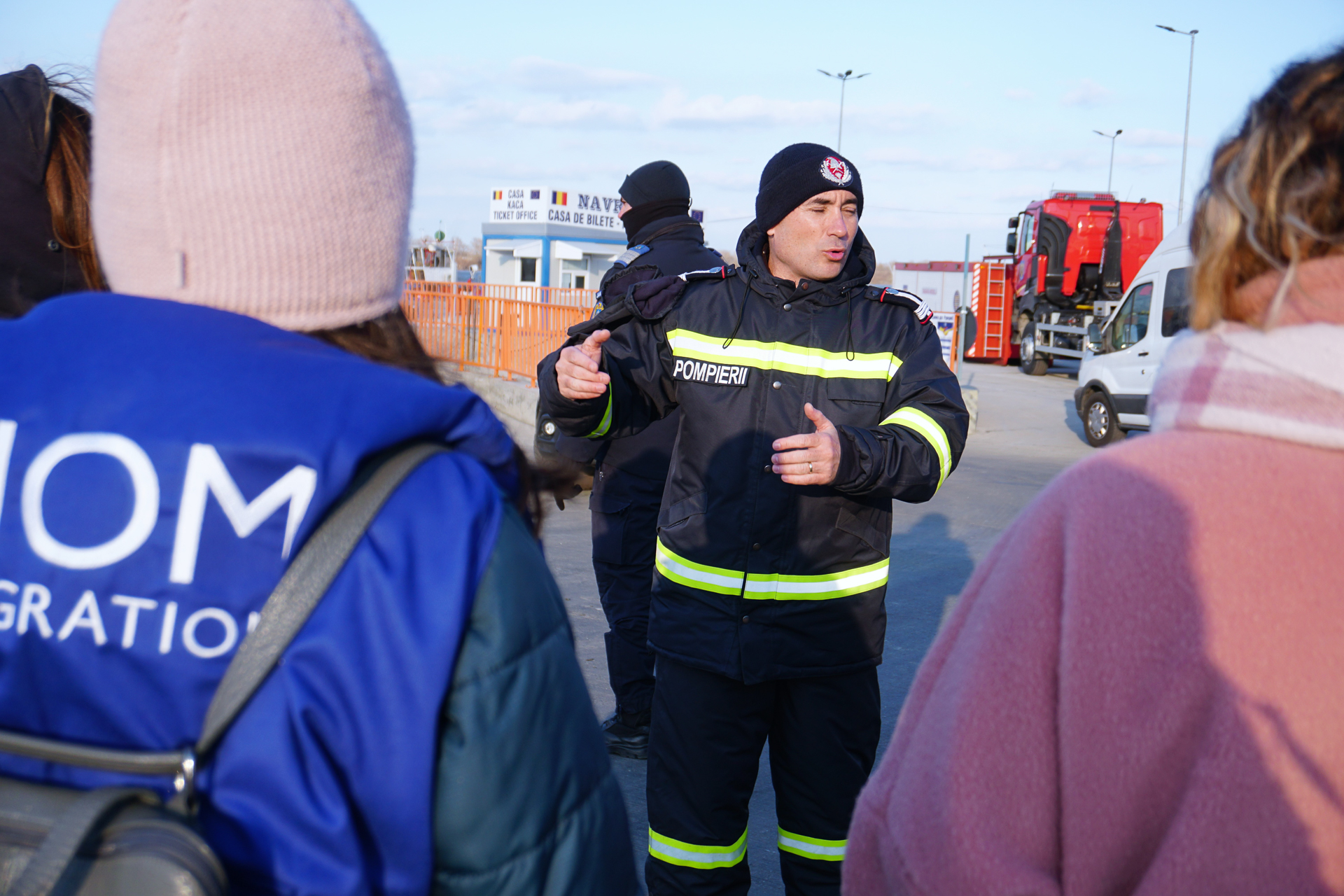 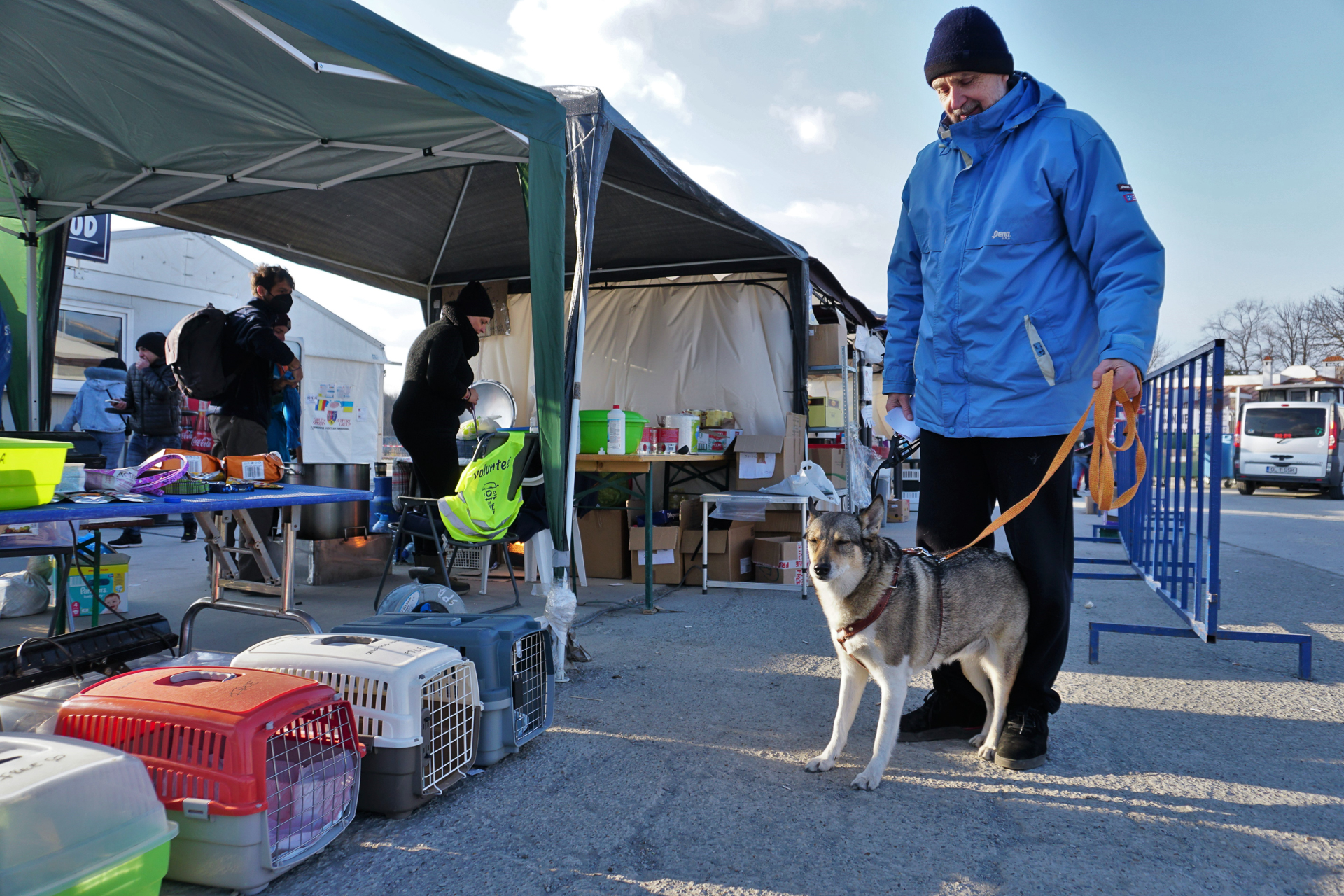 In the Romanian border town of Isaccea where Alina crossed from Ukraine, authorities, partners, volunteers and IOM staff are ready to assist all those fleeing Ukraine. Photo: IOM/Monica Chiriac

Alina came across news that Canada had created an authorization for emergency travel open to Ukrainian nationals fleeing the war. This seemed like a good opportunity for a fresh start, she thought, far from everything that was happening, even if that meant being away from her family.

“It struck me as the kind of place where people who worked hard could make it,” she says with determination.

After sharing her decision with the group, she packed her things and asked her sister and brother-in-law to drive her to the border with Romania, a one-hour drive from Izmail, where they had a heartfelt goodbye, filled with uncertainty about the future.

“It was hard letting go, not knowing when and how the war will end and when we would see each other again.”

At the border, she joined the crowds getting on the ferry to cross the Danube River separating south-eastern Ukraine from Romania. Normally a small quiet border town right on the bank of the Danube, Isaccea now sees thousands of people arriving from Ukraine each day.

Once in Isaccea, thanks to local authorities and the heaps of volunteers eager to help, Alina managed to catch a ride to Bucharest, where volunteers had booked for her a three-night stay in a hotel. 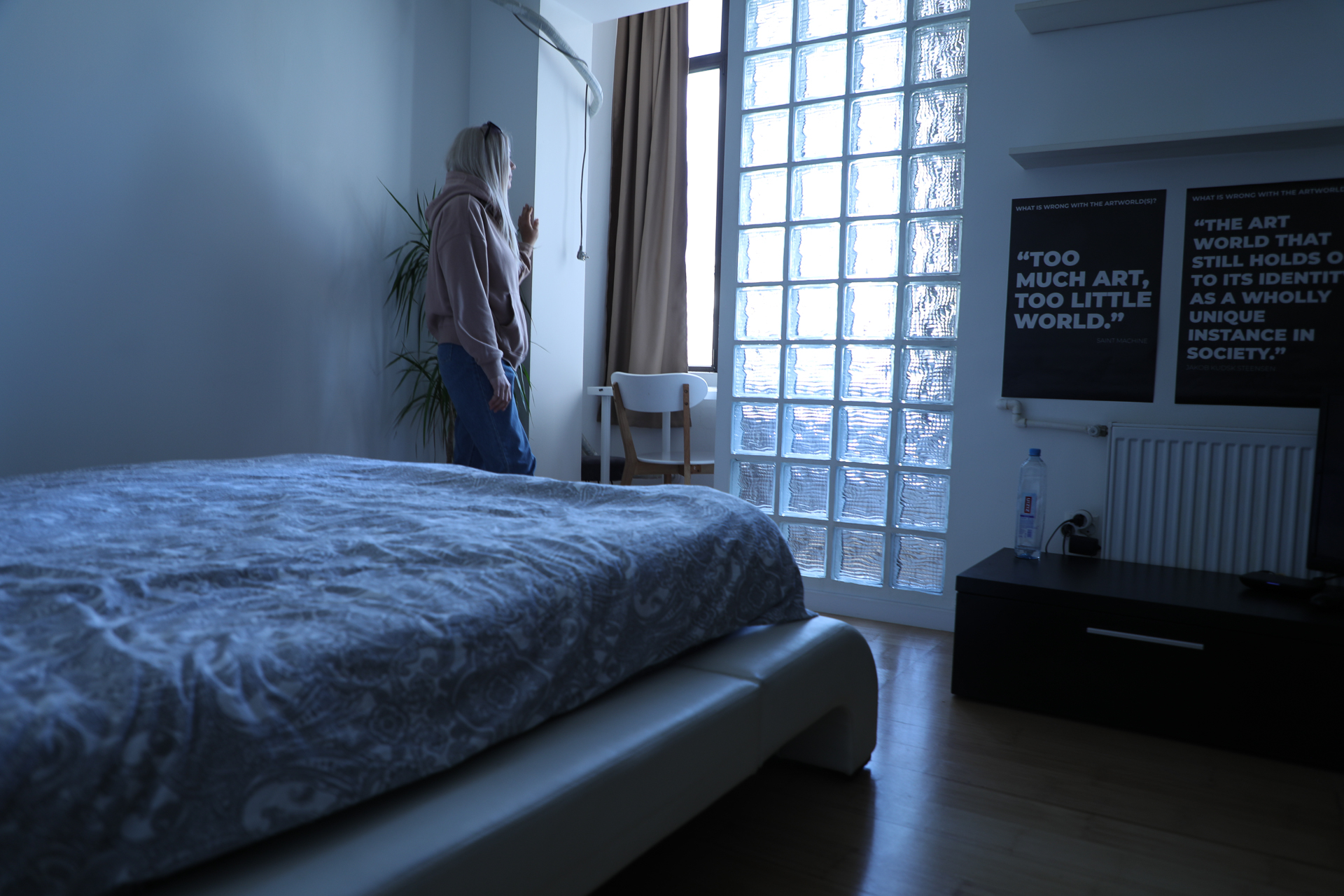 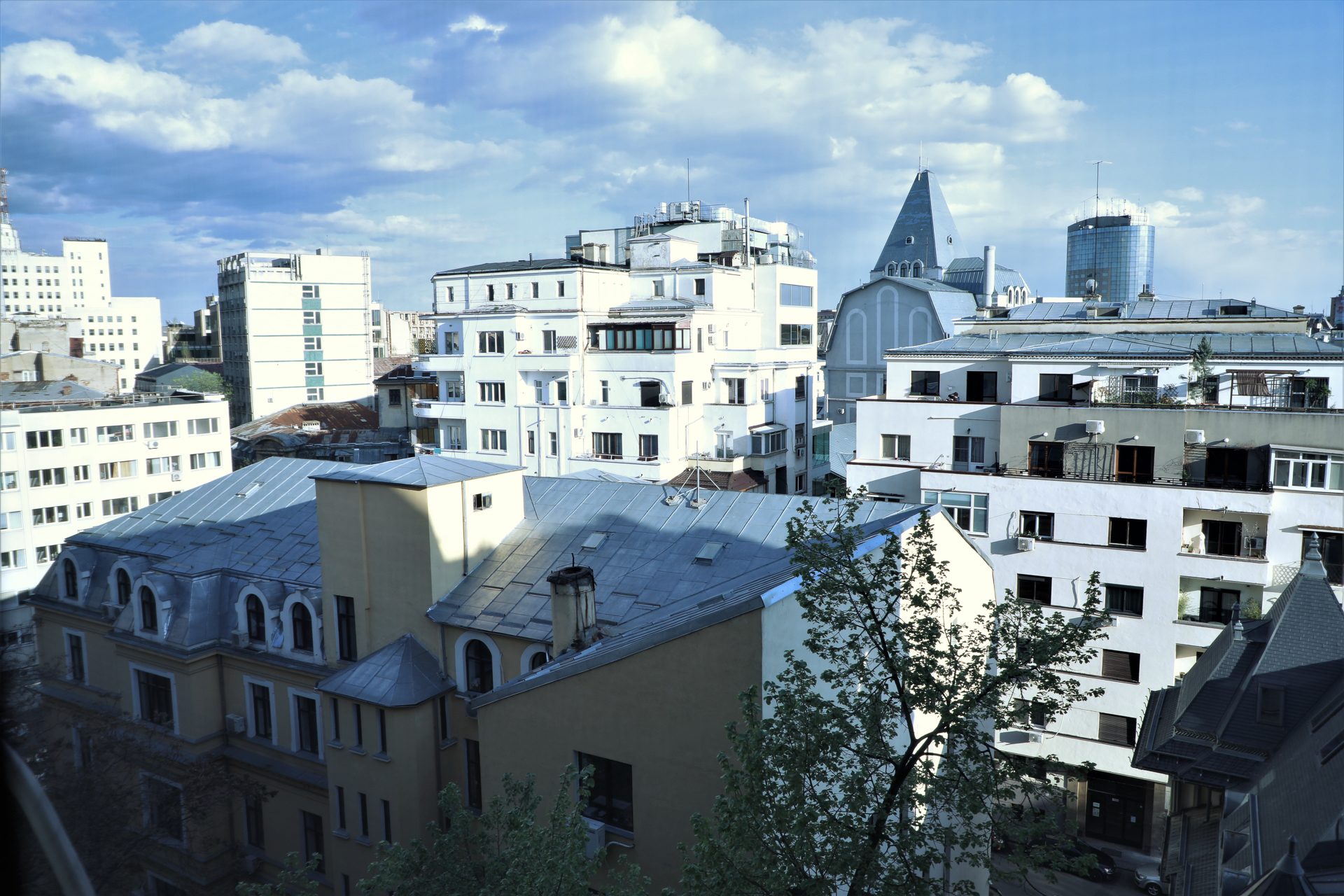 Alina doesn’t know if her outlook on life and fearless attitude developed through travelling or instead took her to travelling. Photo: IOM/Monica Chiriac

On her third day in Bucharest, with money running out, she searched online for free housing for people who fled the war and came across Airbnb.org. An avid traveller, Alina had spent three years travelling through South-East Asia and Europe, keen to learn more about cultures different from hers. Throughout her travels, she has stayed in countless Airbnb rentals, oftentimes with friends, other times alone.

Thanks to an ongoing partnership with Airbnb.org, the International Organization for Migration (IOM) is able to provide free, short-term housing in Romania, Poland, the Republic of Moldova, Hungary, and the Slovak Republic to anyone fleeing the war in Ukraine.

Alina rang IOM’s office in Romania and talked to Yana, a Ukrainian staff, about housing options. IOM directly facilitates and books stays for those fleeing Ukraine, identifies suitable listings that meet strict standards and communicates with hosts, following protocols to ensure their safety and security.

Yana looked on Airbnb.org for a suitable place for Alina that matched her needs in terms of duration and location and reached out to the host. “I was hoping to find a place relatively central that could host me for at least three weeks until I got my visa,” Alina explains. 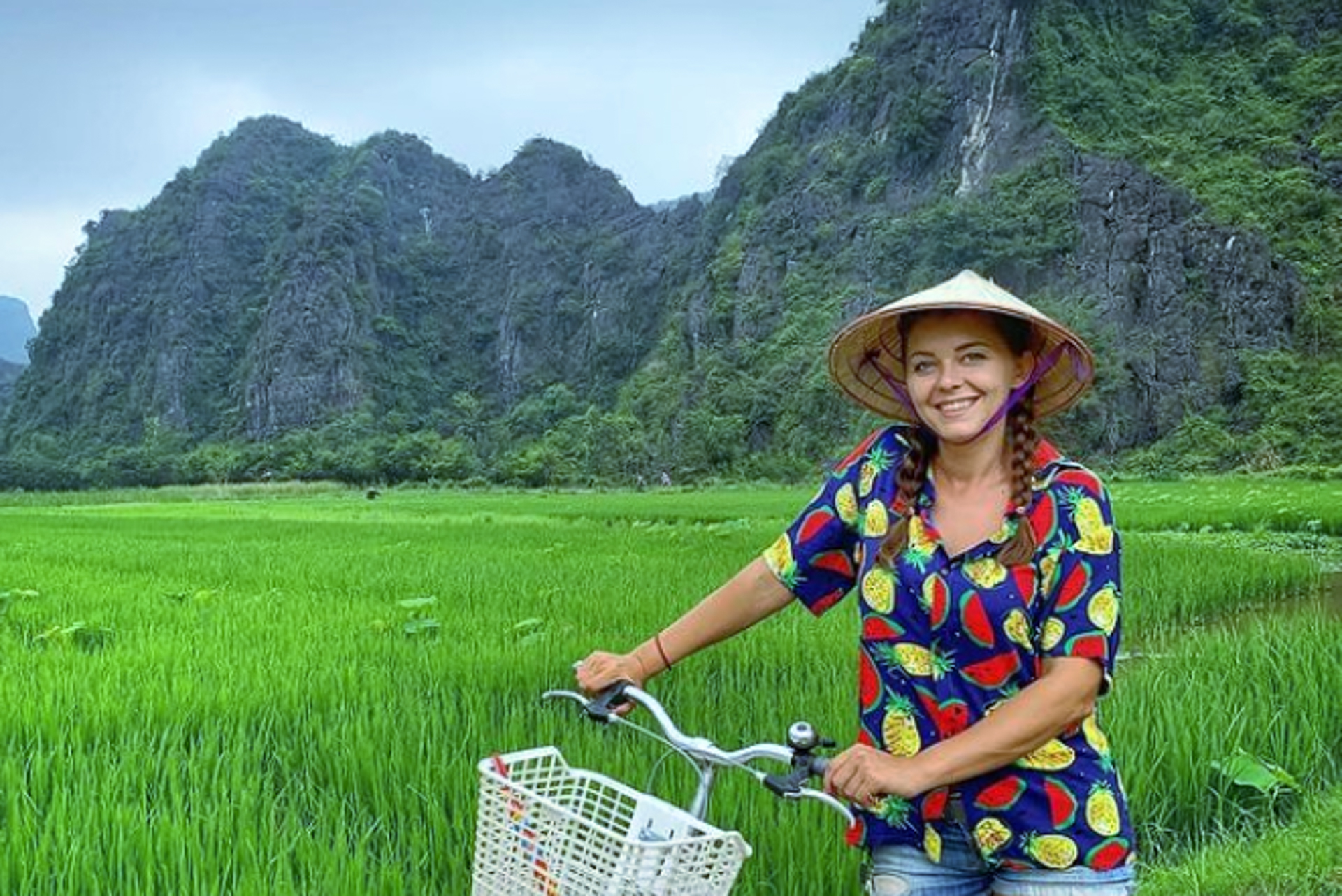 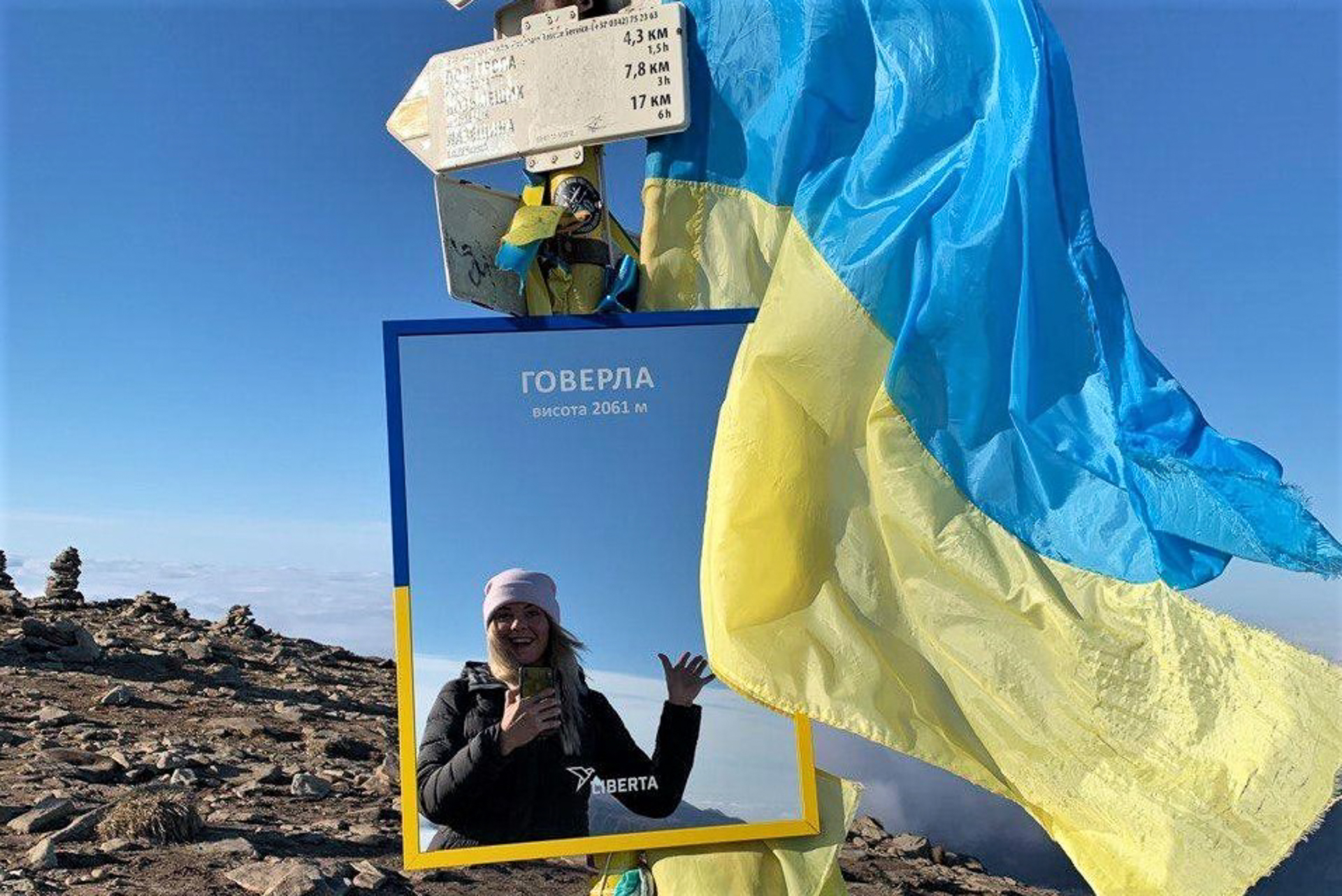 Throughout her travels in Viet Nam and beyond, Alina has stayed in countless Airbnbs. Photo: Alina’s personal archive

One of Alina’s last trips before the COVID-19 pandemic was to the top of Mount Hoverla in the Carpathian Mountains. Photo: Alina’s personal archive

Having already completed several other bookings through Airbnb.org since the beginning of the war, Nicoleta and her husband, Andrei, were more than happy to host Alina too. They came down the following day, showed her around the apartment and gave her the keys.

Just like countless other Romanians who have mobilized to support their neighbours, Nicoleta and Andrei are eager to help their guests, with accommodation and beyond. They have also booked doctor appointments and bought groceries.

“We know they will never ask anything of us,” Nicoleta says. “It’s a matter of dignity, so we would never impose.”

When they first met Alina, Nicoleta and Andrei were touched by the fact that she was only carrying a small backpack. “I only brought the essentials: clothes, notebook and a hair dryer,” Alina laughs. “I don’t need much, and it’s much easier to travel like this,” she adds. 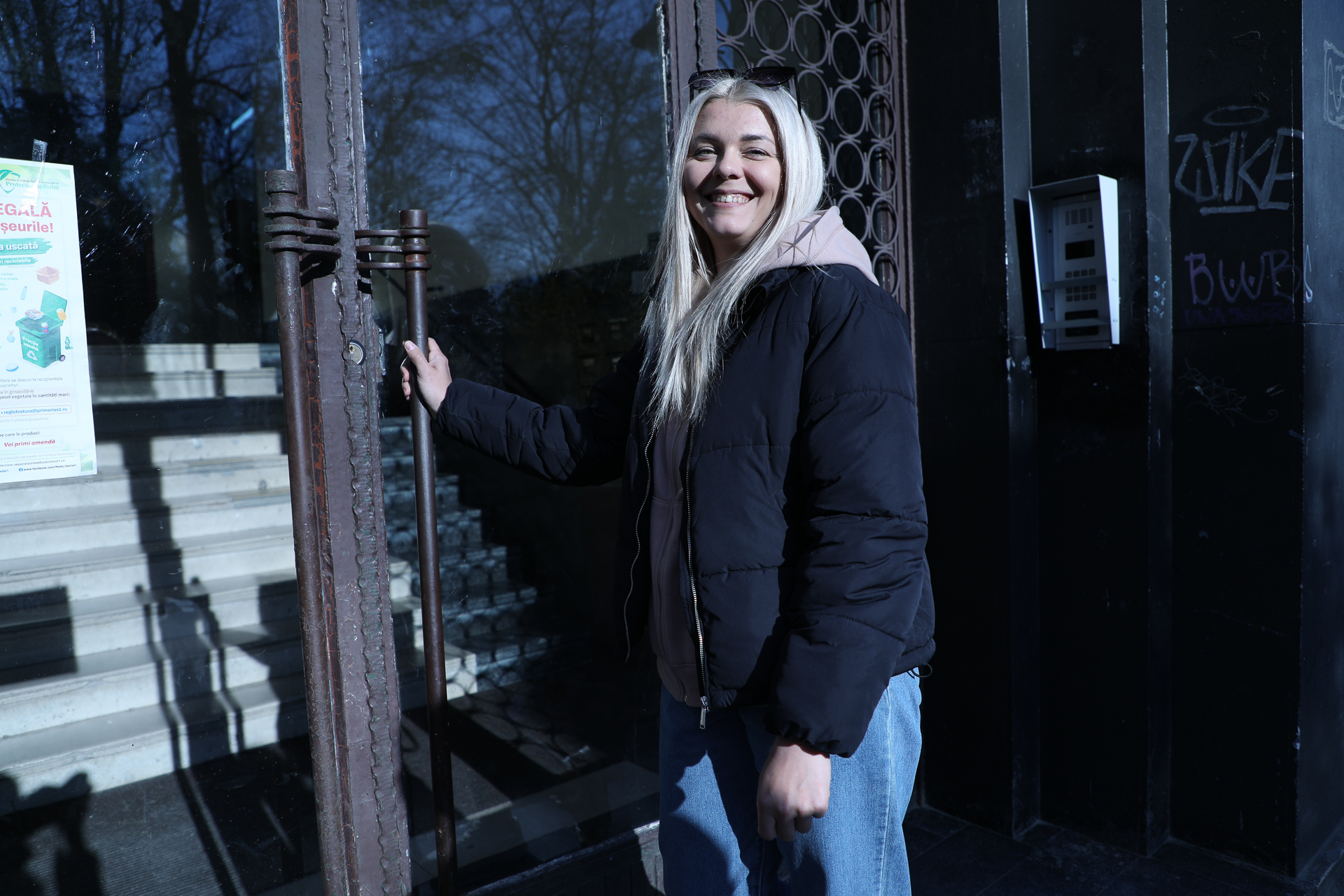 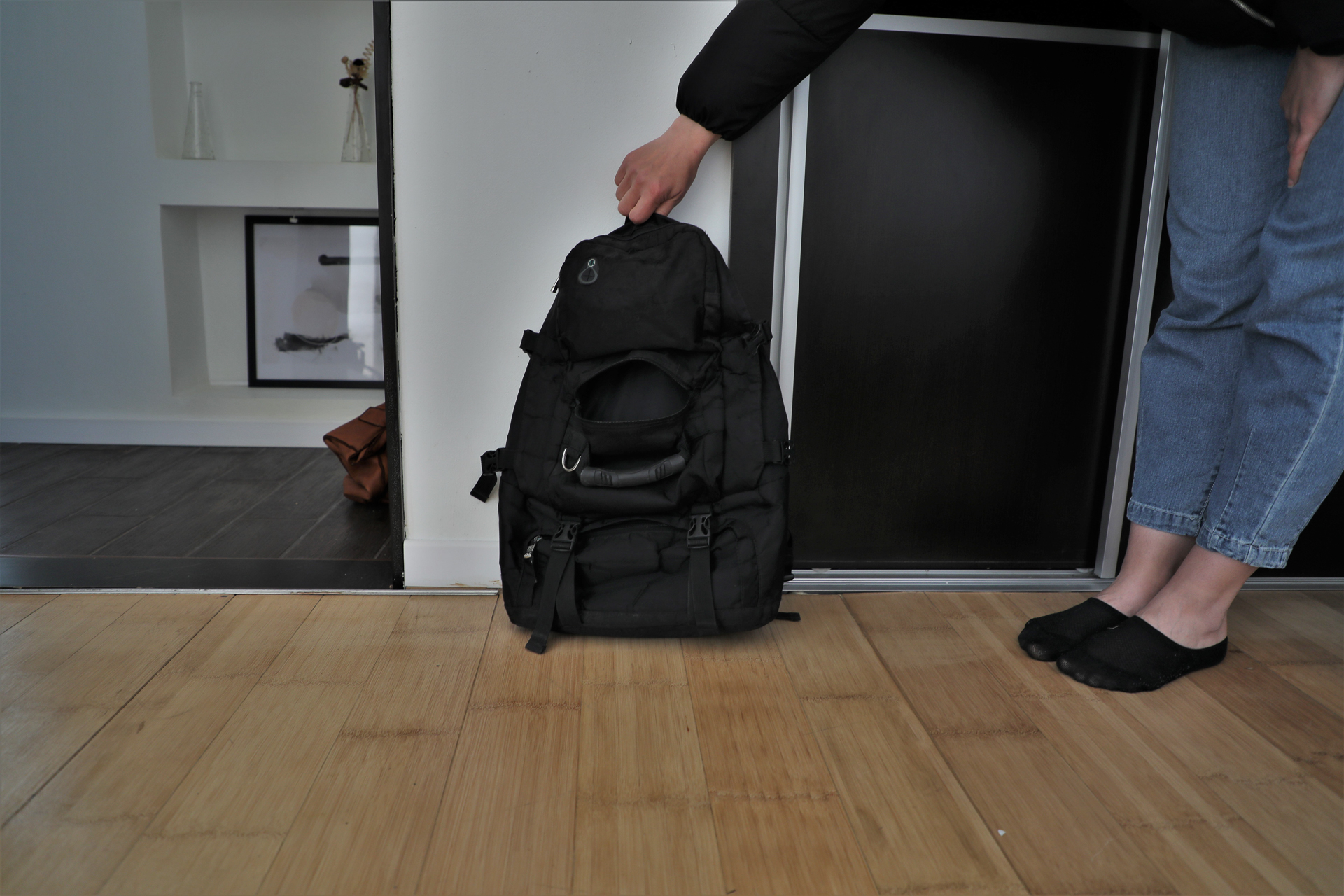 When they first met her, Alina’s hosts were touched by the fact that she was only carrying a small backpack. Photo: IOM/Monica Chiriac

In the meantime, Alina has applied for her visa for Canada and as she waits, she tries to enjoy her time in Romania. Located right next to Cișmigiu Gardens, the apartment gives Alina the possibility to take daily strolls to enjoy the sunshine and take her mind off her visa application.

An explorer by nature, she has already completed her first walking tour in Bucharest’s Old Town. “I learned cool things about Ceaușescu and Dracula and have received lots of recommendations for things to do and eat.”

Although she has a kitchen in her Airbnb and works as a professional chef back home, not much cooking takes place these days, she says.

While she likes her apartment and the city, Alina doesn’t allow herself to get carried away and feel like she is on holiday. Partly because of the war and partly not to jinx herself, she doesn’t want to plan too far ahead either. Once she receives her visa, she will decide on a city to live in and search for suitable accommodation and eventually a job where she hopes to put her cooking skills to good use.

“I want to take it one step at a time. I don’t want to look too far into the future anymore,” she says. “The war has taught me to cherish every moment.”

Alina says she will forever be grateful for the kindness of the people who have hosted her along the way: Andrey, Svetlana, Yuri, Natalya, Nicoleta and Andrei. 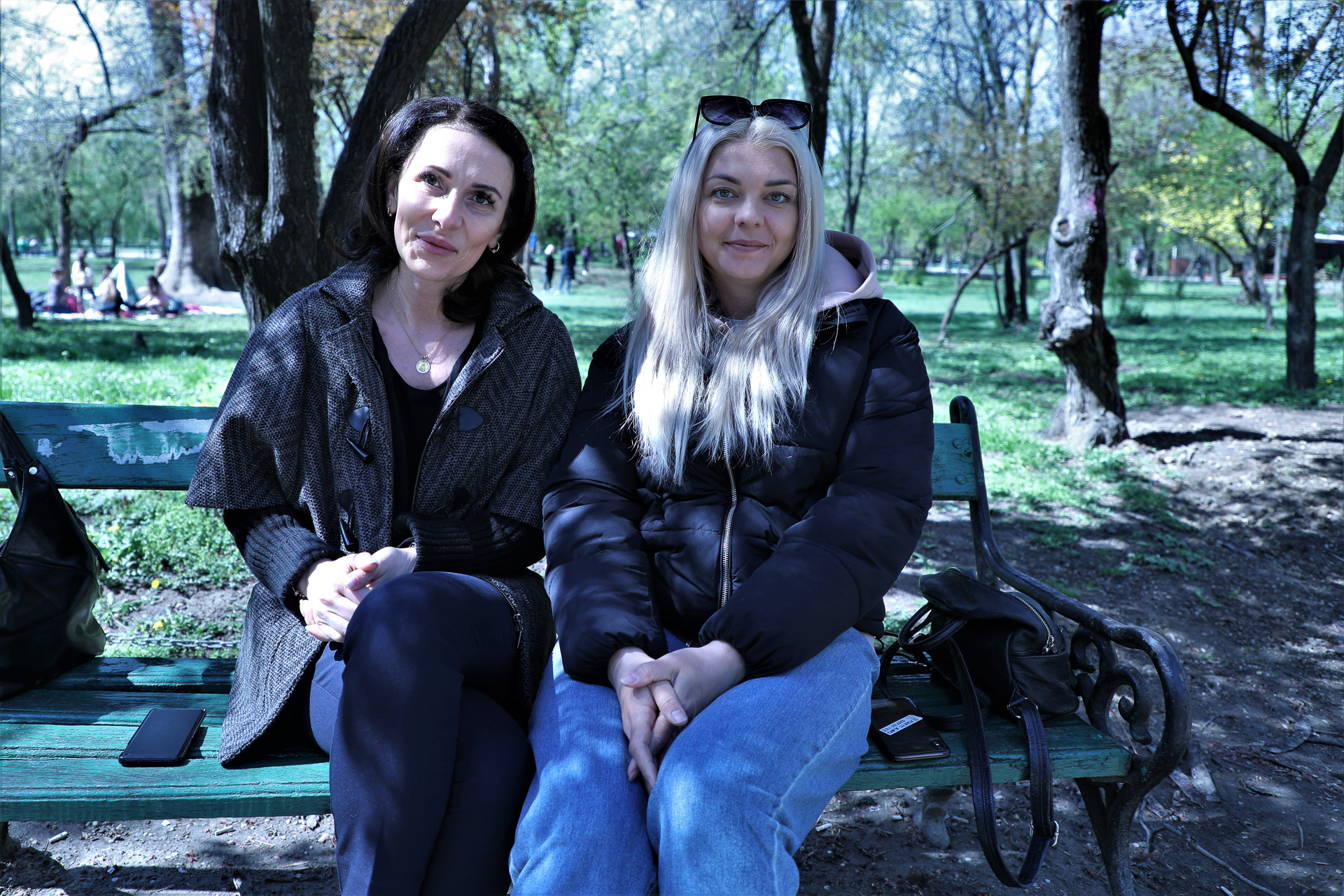 Alina is grateful to have had Nicoleta and Andrei as her hosts in Bucharest. Photo: IOM/Monica Chiriac

If you are interested in opening your home to support this effort, you can learn how on Airbnb.org.

If you are interested in funding or donating, please check IOM's Flash Appeal and fundraising page.