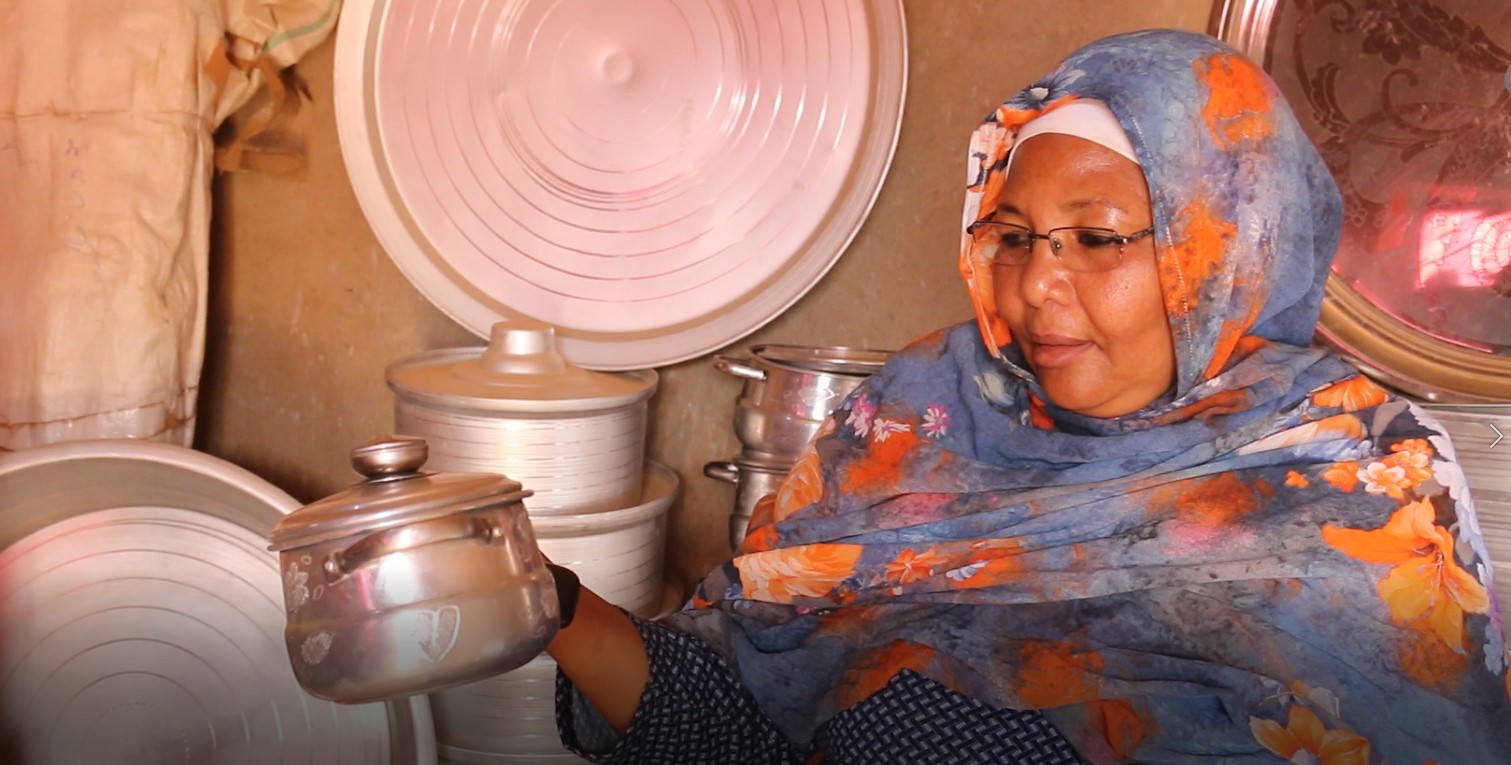 Fatima showcases the wares she trades in through the reintegration cash assistance she received. Photo: IOM Sudan 2021

Sudan, 8 August 2022 – While returning migrants usually face significant obstacles in re-establishing their lives back home, Fatima has taken the challenge in her stride. After her husband remarried, 49-year-old Fatima became the main breadwinner for her four daughters.

Motivated by the desire to secure a better future for them, she migrated to Egypt in 2017, taking her two youngest daughters with her.

“I took one step at a time, but I always had the mindset of trying and succeeding for my daughters,” she says.

“Leaving my two older daughters behind was one of the most difficult decisions I had to make,” explains Fatima. She barely managed to survive on short-term jobs as most employers would not hire her because of her age. “They told me I was too old and unfit, and when my daughter, who was 17 at the time, applied for jobs, they told her she was too young,” says Fatima.

Before the onset of COVID-19, migrants in Egypt and elsewhere were already vulnerable. This worsened after the pandemic, including for Fatima and her daughters, who struggled to make ends meet. “We suffered even more and there was no one to help us,” Fatima recalls.

The viable option for them was to return to Sudan. Through the Sudanese community in Egypt, Fatima learned about IOM’s Assisted Voluntary Return and Reintegration Programme and immediately made contact. 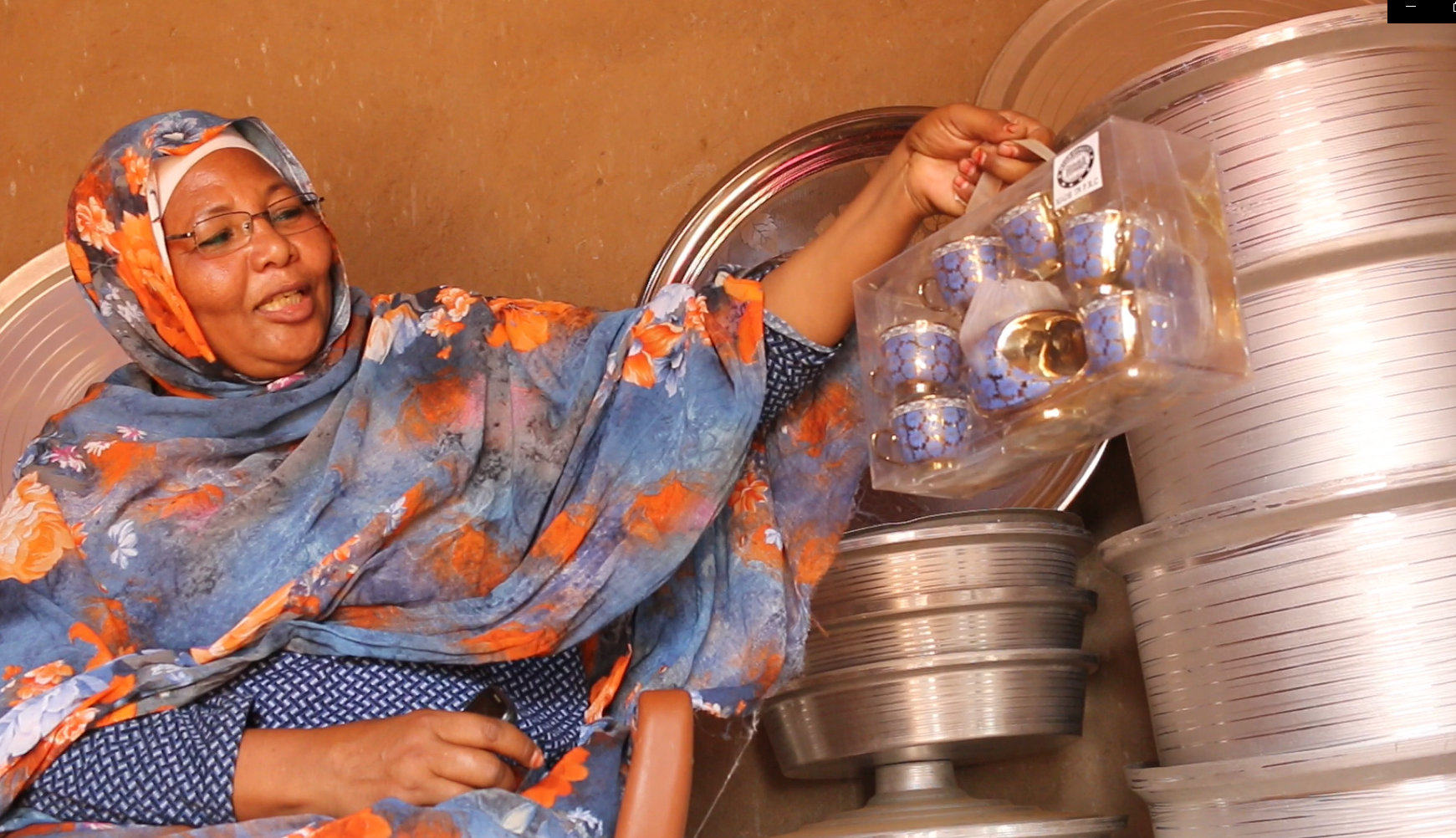 Fatima showcases the wares she trades in through the reintegration cash assistance she received. Photo: IOM Sudan 2021

In June 2021, IOM arranged for Fatima and other Sudanese nationals stranded in Egypt to return. After arriving in Sudan, Fatima was among those who received reintegration assistance in cash, which allowed her to cover her needs across the economic and social dimensions of reintegration. Indeed, this enabled her to set up a micro-business as well as to register for National Health Insurance that also covered her two daughters, both of whom received support to pursue their education through the programme.

Cash assistance provided by IOM Sudan as a reintegration modality proved to be faster, more flexible and less prone to fraud than other modalities, such as in-kind assistance. This allowed the recipients to choose which business they wanted to start.

Fatima had set her sights on setting up a utensil trading business. “It took less than a month for me to receive assistance, which made me even more determined to start a business of my own,” she says. She bought some household utensils from a wholesale market to sell to the women in her community. Soon customers started buying from Fatima.

To further expand her business, Fatima also started selling cooked meals across the health-care facility in her neighbourhood. The lack of a cafeteria for the patients and visitors provided her with the market for this.

“To further support me and my daughters, I started the food business as a plan B,” she says. “My businesses are going well, and I can now provide for my daughters. Returning to Sudan was the best thing I could have done.”

Fatima can now look back and take pride in having turned her life around.

In 2021, more than 3,800 returnees in Sudan have received reintegration assistance under the EU-IOM Joint Initiative. Worldwide, IOM supported close to 1.9 million aid recipients with cash-based interventions across 119 countries.

More information can be found on IOM Cash-Based Interventions in the IOM CBI Annual Report and Case Studies 2021.