To Stay or to Go: One of the Toughest Decisions a Yemeni Can Make

A displaced person standing in front of a shelter that he is helping to construct in Yemen. Photo: IOM 2021/Majed Mohammed

Ta’iz, Yemen – Deciding to leave their home was a difficult call for Aisha and Tawfiq, but two years ago, out of fear for their lives, the couple fled their farm in Ta’iz, Yemen.

“Shells and bullets had started falling near us. We knew we were in severe danger and needed to get to a safer location,” said Aisha, describing what had pushed their family over the edge after enduring years of conflict.

“We finally left our home when we saw most of our neighbours leaving. At that time, the clashes had gotten so scary that we fled with nothing. We even left our animals behind – we just couldn’t take them," she added. 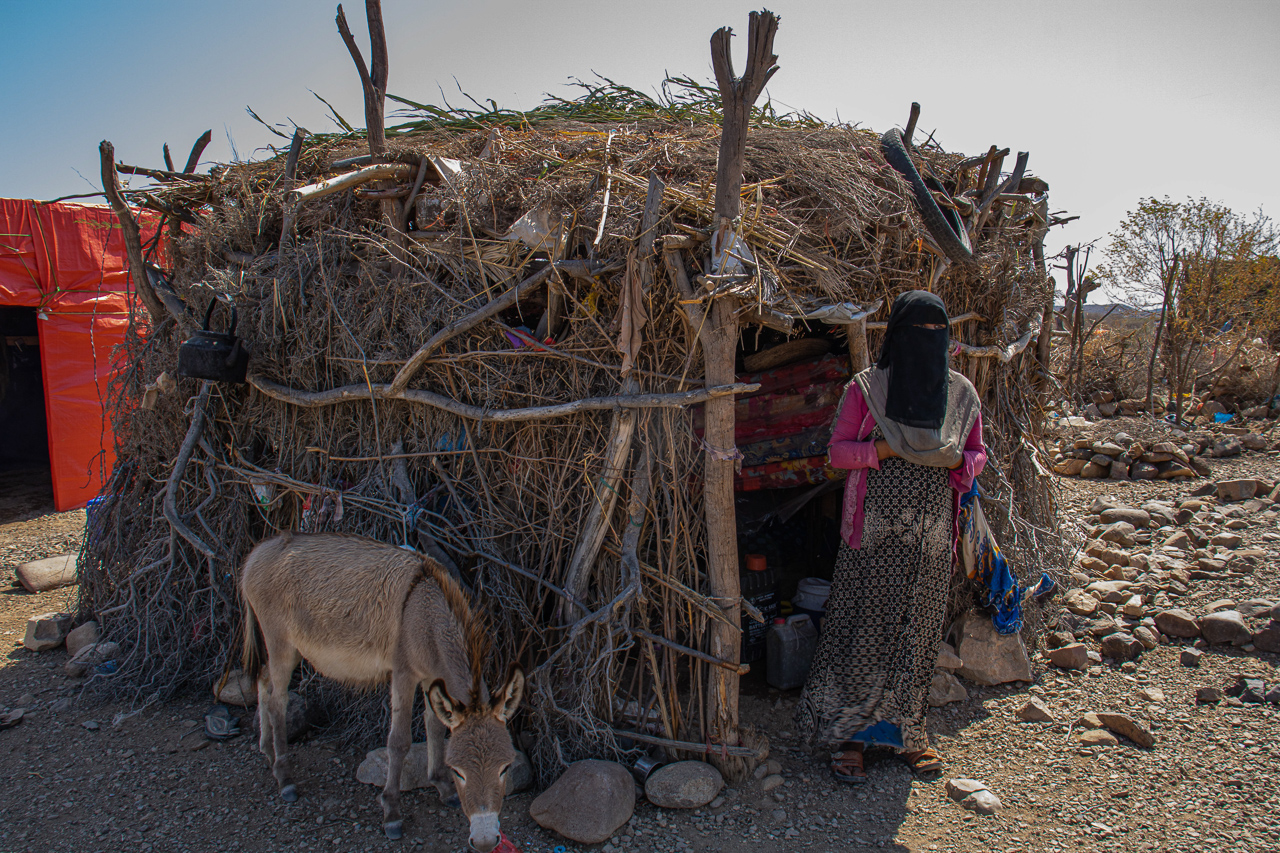 Aisha and Tawfiq used whatever they could to construct their makeshift shelter when they became displaced. Photo: IOM 2021/Majed Mohammed

Not too long before the scariest moment of their lives, Aisha and Tawfiq’s world had been quiet but comfortable. They had a small garden where they kept sheep and chickens. Tawfiq could be found with the herd most days tending to their needs and helping the mothers raise their lambs.

In 2015, the conflict broke out in Yemen, and more than six years later it has affected all people across the country, with over 20 million people in need of humanitarian assistance. Deadly fighting, economic collapse, disease outbreaks and extremely limited public services remain a constant of daily life in Yemen.

Aisha and Tawfiq were lucky for a while before they became two of the 4 million displaced people in Yemen, but then about four years into the conflict, their home became unsafe. Their sheep began to die, and their farm was getting destroyed. Access to food and clean water, as well as income, became completely cut off. Almost worst of all, while comfort and even necessities for survival were gone, they were replaced with anxiety, day and night.

When the armed clashes encroached on their neighbourhood, Aisha and Tawfiq were not sure where they and their parents could go, but they knew that they needed security. They left their home by car and eventually made it to Heartha district also in their home governorate of Ta’iz. They built a small shelter with whatever materials they could find near some trees for shade and protection. 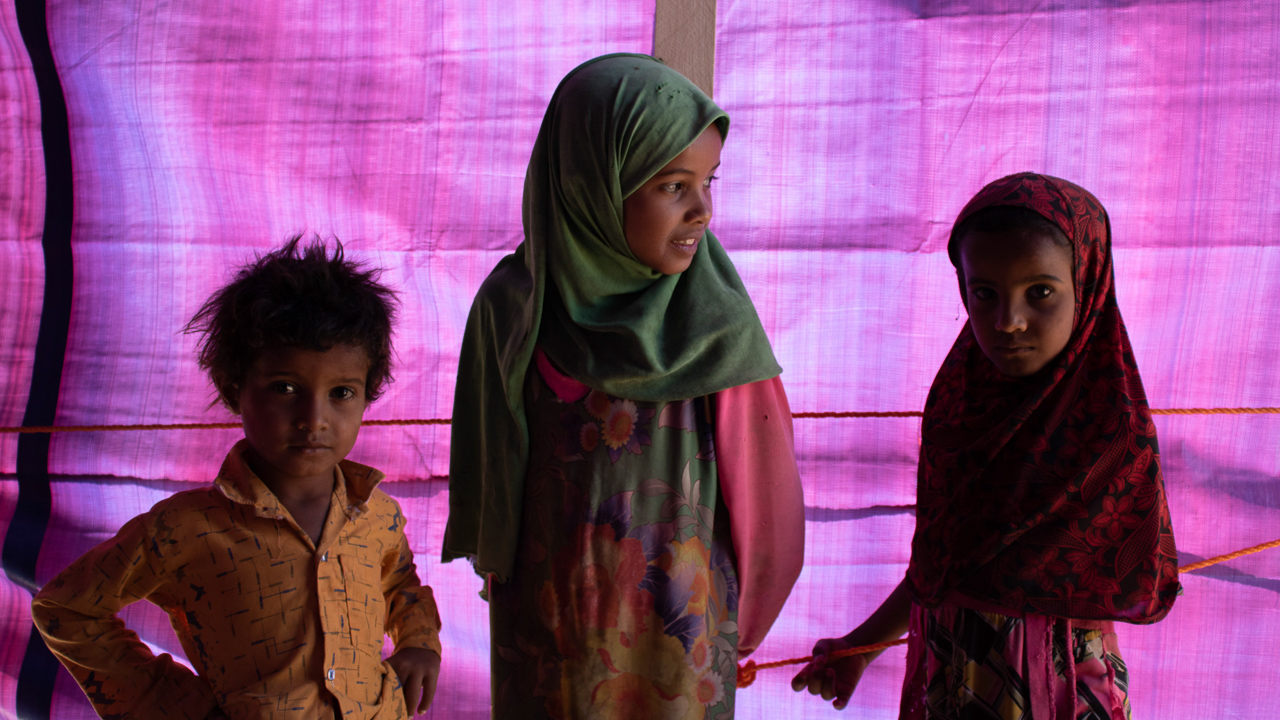 Some of Aisha’s children inside their new emergency shelter, which was built with IOM support. Photo: IOM 2021/Majed Mohammed

“Our life here is bad – much worse than our old one. We have needs and the money my husband makes with his motorcycle taxi is not enough. He wakes up every day to pick up people from one place to another and he earns only 2,000 YR (USD 3) per day. This shelter is not good enough to protect us from insects or the weather,” added Aisha, describing the hardship of their life in displacement.

Urgent humanitarian needs are rife among displaced people in Yemen and many have no option but to live in inappropriate shelters as Aisha describes, having left behind better-built homes and all of their belongings. Beyond emergency needs, access to income is also a major issue for most displaced families. Many displaced people have no livelihood opportunities and families often can no longer afford basic meals, further deepening food insecurity among this vulnerable community.

Like Aisha, Ali had to flee his home in another area in Ta’iz to come to Heartha district when it grew more and more unsafe and risky due to the conflict. 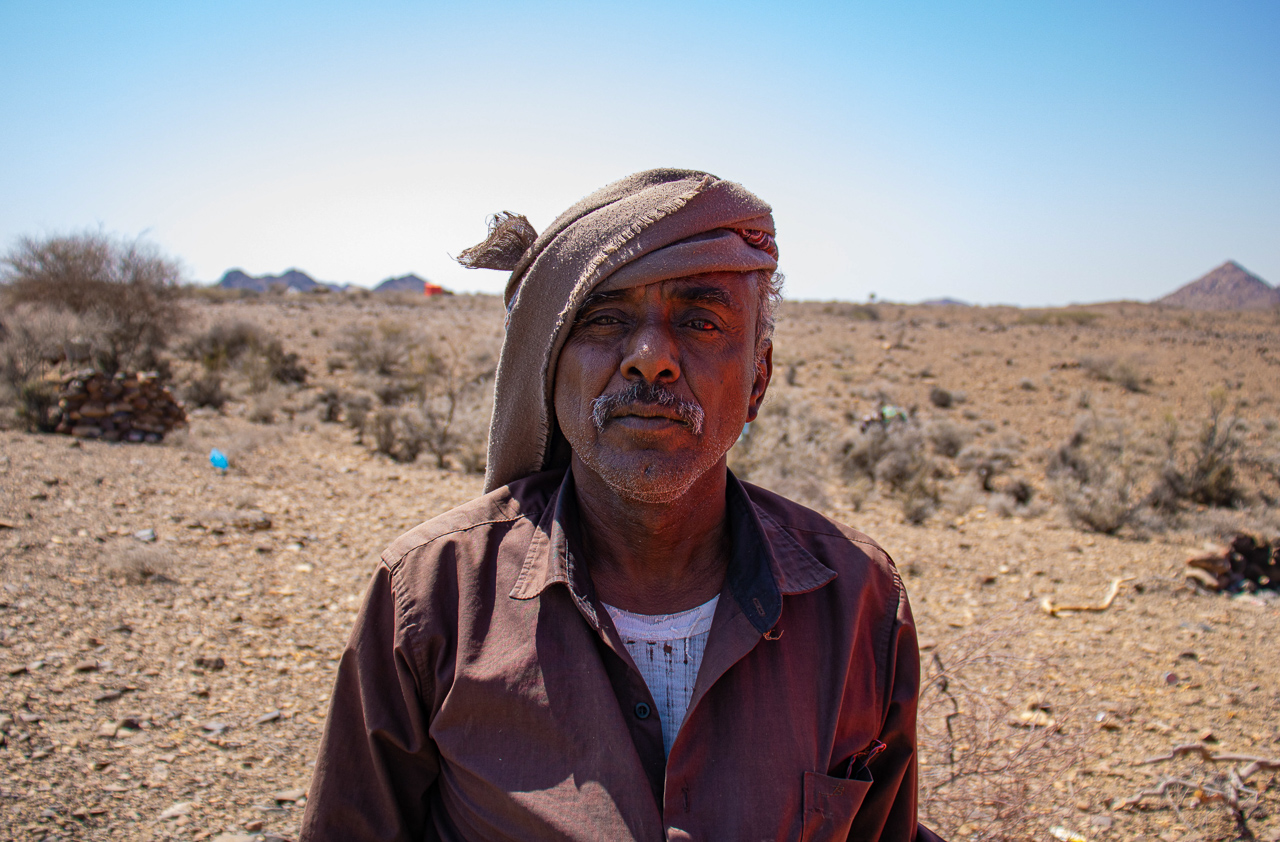 Ali lost everything when he and his family became displaced. Photo: IOM 2021/Majed Mohammed

“I left my home with my children and wife because my house and everything in my village was destroyed – we lost our home and our farm,” said Ali.

Ali is a father of three daughters and a son. Their lives were turned upside down when fighting occurred near their village, forcing them to flee. Although he knew he would lose everything if they left, in the end, the conflict made the decision for Ali and his family. If they stayed, he knew it would not be only the house and their belongings that they would lose.

Ali had made a good living as a farmer and selling trees, firewood and charcoal.

“Before the war came to us, I worked as a farmer. I used to sell wood and charcoal in the market. But everything changed when we left our village; we left everything behind. Now, it is very hard to find food for my family. Every day, I try my best to find work and secure food for my family,” he added.

This is not a unique story. At least 5 million people in Yemen are estimated to be on the verge of famine. Displaced people have it particularly hard when trying to secure enough food and nutrition on a daily basis. The decision to leave their homes to find safety does not, unfortunately, mean that a family will always get all the support they need.

The International Organization for Migration (IOM) works with support from European Union (EU) Humanitarian Aid to meet the emergency needs of displaced people across Yemen. Shelter is among the most common immediate needs of a displaced family. Aisha and Ali were among the recipients of shelter materials and emergency aid in Heartha. On that day, IOM distributed over 400 emergency shelter kits, 60 relief item kits and 2,000 plastic sheets. Each family who was supported now has emergency shelter materials, mattresses, blankets and kitchen tools.

“These people are displaced because of the conflict. They usually cannot take anything with them, and they need urgent support to build or improve their shelter to ensure their family’s safety. With the help of the aid items that we distributed, these families can now feel secure in their shelter,” said Mohammed Alzailei, a member of the IOM shelter team in Ta’iz.

In addition to distributing shelter and relief materials, IOM trained displaced people in Heartha on how to build wooden shelters, enhancing their carpentry skills. A carpentry expert was brought in by IOM to build shelters and provide the training. These skills can be used beyond just their own shelter construction.

Aisha with her new shelter, which will better protect her from the elements, and new household items. Photo: IOM 2021/Majed Mohammed

For Aisha, Ali and their families, this distribution means that they have one less worry to face.

“It’s not like our previous home and we are still missing out on some services, but it is better than sleeping in a risky place. Now we can sleep safely, and we are not worried about our lives," said Aisha.

“I was only thinking about my family and how I can keep them safe,” added Ali.

IOM Yemen reached nearly 58,000 people with emergency shelter support and other emergency assistance in the last year through its partnership with EU Humanitarian Aid. 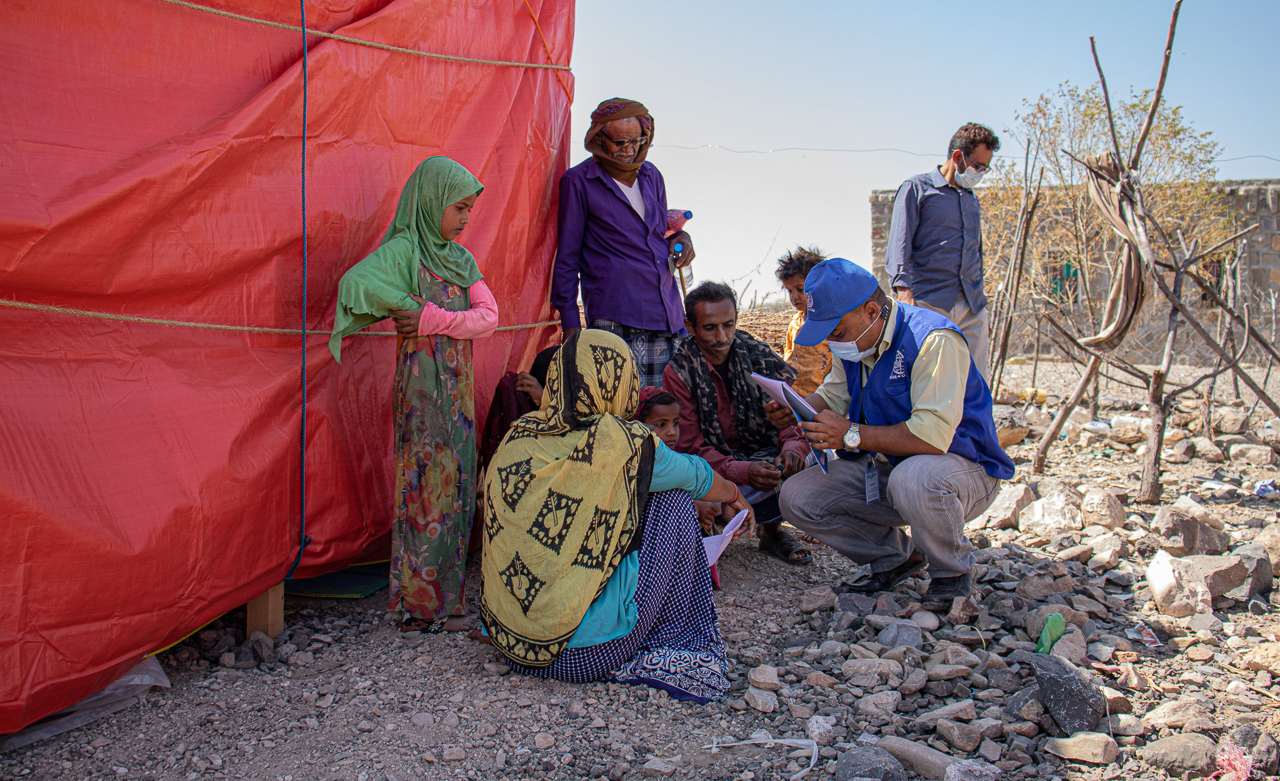 A member of the IOM shelter team talks with the displaced community during the distribution and construction of shelters. Photo: IOM 2021/Majed Mohammed