Stitching the Development Fabric in Iraq 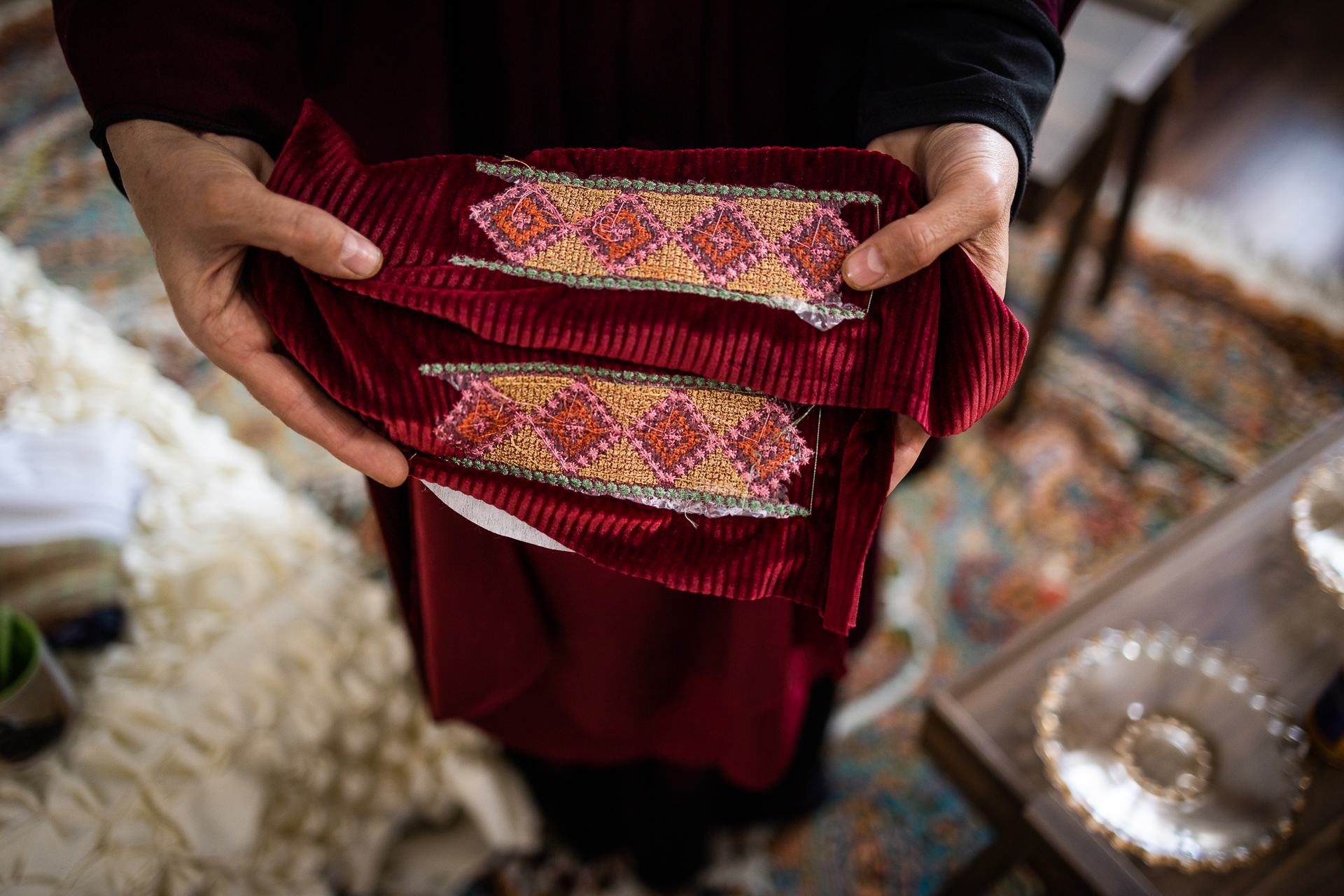 Mhabad holds a piece of embroidery that her shop specializes in. Photo: IOM Iraq

Sulaymaniyah, 7 November 2022 – Though Guchin Hamid Maroof wasn’t a seamstress by trade, she picked up the skill so that she could sew clothes for her family. Her daughter, Mhabad Shareef, recalls childhood memories watching her mother work at the sewing machine. Mhabad admired the tool, and how her mother’s fingers deftly moved across the soft fabric – but it intimidated her. Over time, she worked up the nerve to ask her mom if she could try it. “I slowly learned that it’s okay to try and mess up,” she reflects.

Guchin’s husband recognized his family’s reliance on the tool, and his wife’s and daughter’s love for the craft. Saving up money, he eventually gifted Guchin her own sewing machine – which proved essential throughout the sanctions of the late 1980s and 1990s. Mhabad observed as her mother would produce beautiful garments not only for their family, but also for sale in local markets. Her mother’s ingenuity and discipline encouraged her to consider her own passions, cultivating the seed for what she wanted to do with her life.

In 2003, Mhabad opened Number 1 Tailor, offering seamstress services to her local community in Sulaymaniyah, Iraq. Mhabad initially employed one person, but, over time, slowly grew her customer base and was able to expand. By the time Mhabad received an Enterprise Development Fund (EDF) grant from the International Organization for Migration (IOM) in 2021, she had five employees. The funding helped her hire five more.

Through the EDF, IOM provides small- and medium-sized enterprise (SME) owners access to financial capital to support job creation and large-scale economic recovery in Iraq. Mhabad’s business is supported by EDF-women (EDF-w), a targeted variant of the grant designed to reach female business owners. “I’m planning on growing my business to 20 employees next year!” she says. 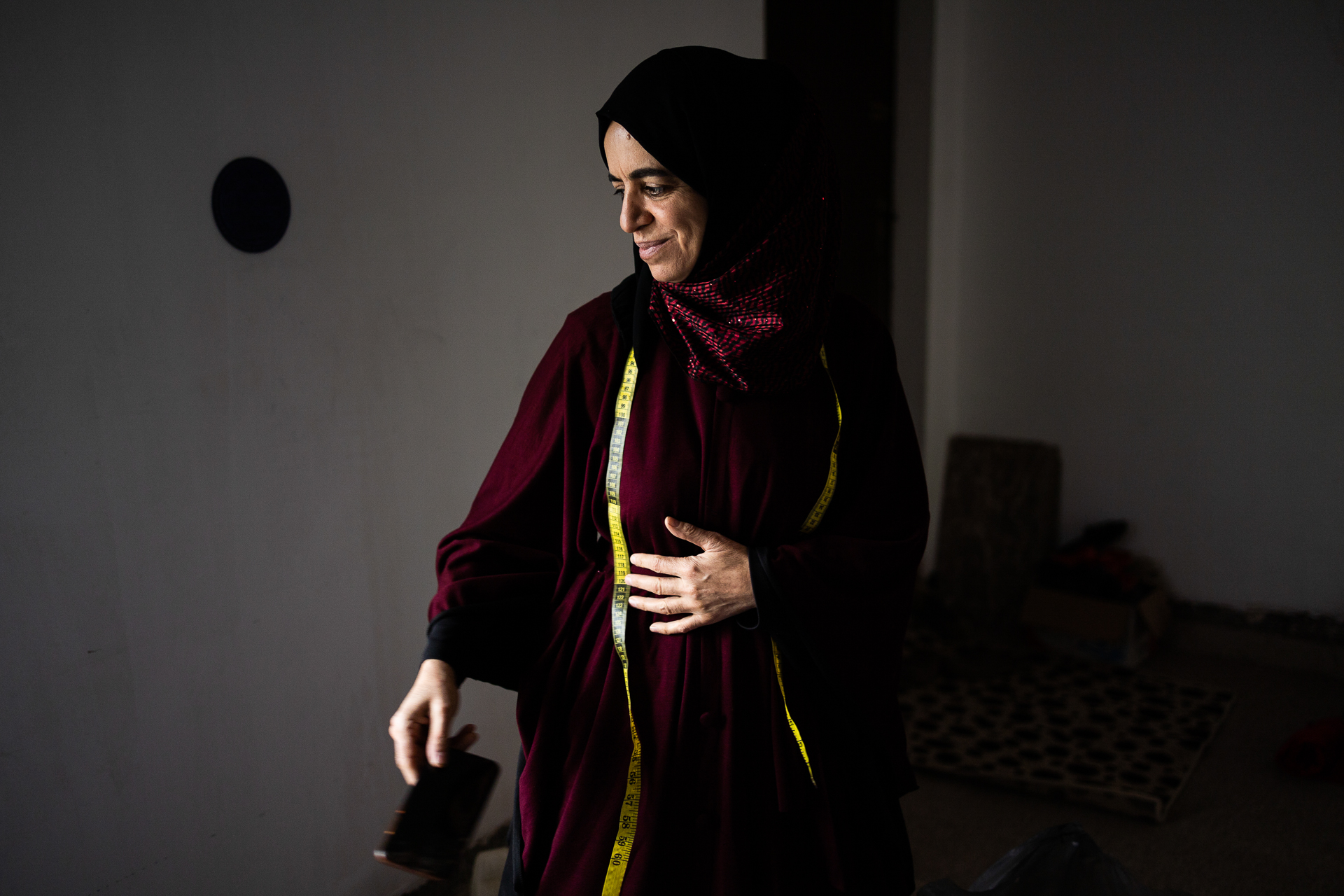 Mhabad in an upper room where she sometimes works after regular working hours are over. Photo: IOM Iraq

The two main objectives of the EDF-w are to support female-led businesses to expand through facilitated access to capital and to support the entry into the labour force of female jobseekers who may face cultural, economic, and social barriers.

And these objectives are being materialized.

Beyond her growing her workforce, Mhabad strives to give back to her community, sourcing her materials from a local bazaar. She points out that “Everyone benefits when we buy things ‘Made in Iraq’.” In the evenings, Mhabad also offers tailoring classes and mentorship to those hoping to start their own businesses.

Diversifying her offerings as a seamstress, businesswoman, and educator has been key to Mhabad’s success. Her ability to adapt was essential after the COVID-19 pandemic shut down Sulaymaniyah in 2020. She was forced to close the shop’s doors for six months. But instead of stopping production, her staff pivoted to sewing masks, free of charge, for the Hewa Oncological Hospital. Eventually, they started producing masks to be sold in stores around the city.

Throughout 2020, the shop was able to do just enough business to keep afloat and avoid laying off a single employee. 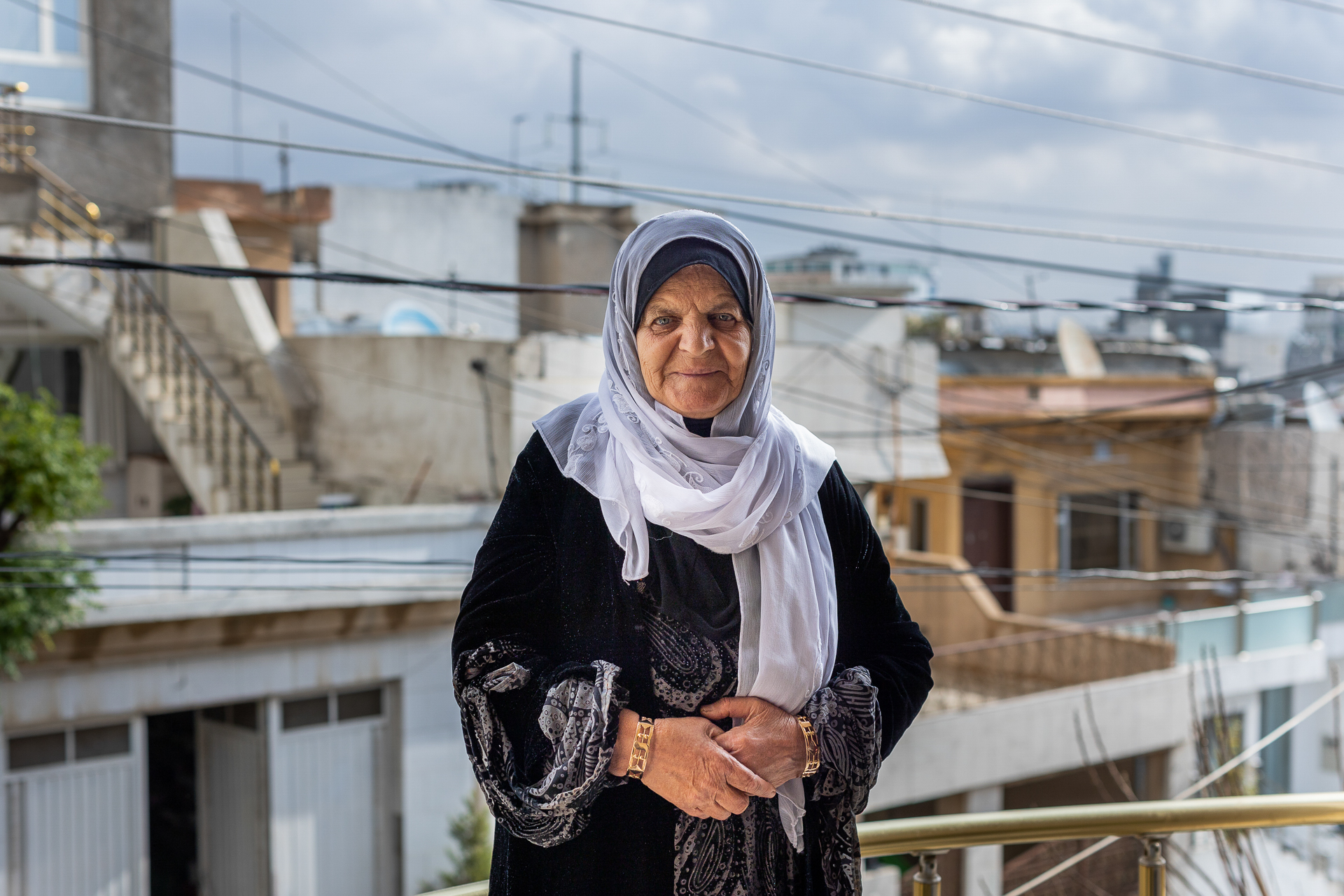 Guchin Hamid stands at the porch of the apartment she shares with her husband. Photo: IOM Iraq

In the following months, the USD 22,000 EDF grant they received was essential in helping to kickstart the business as it emerged from that slow period. Mhabad bought three tailoring machines, a sewing machine, an embroidery machine, and a labelling machine with the funding. To get the word out about the shop’s new products, she also hired a social media manager who supports with online advertisements. All the new equipment and exposure has helped Mhabad double the business she was seeing before the grant.

These days, as Mhabad takes in clients’ requests in the shop’s front room, the staccato surge of a sewing machine whirrs in the background. Colourful spools of thread are arranged on the wall beside the shop’s large, bright windows. Fabrics of various textures and colours are passed from hand to hand as the garments are moved through the many stages of production.

The shop’s workers talk about how the benefits of their employment extend well beyond their pay checks – citing the friendship and support they’ve found in their colleagues. In the workshop, they diligently carry out their duties: cutting the patterns to hand off for hemming, sewing, and embroidery.

Renas Omer, 28, stands behind her sewing machine, carefully aligning the plush velvet fabric of a green belt before closing the seam. She has worked as a seamstress at Number 1 Tailor for a year and talks about how her work is more than just income to support her five-person household.

“It’s about more than a pay check,” she says. “I’m getting skills, I’m making friends. I have a social life now.” 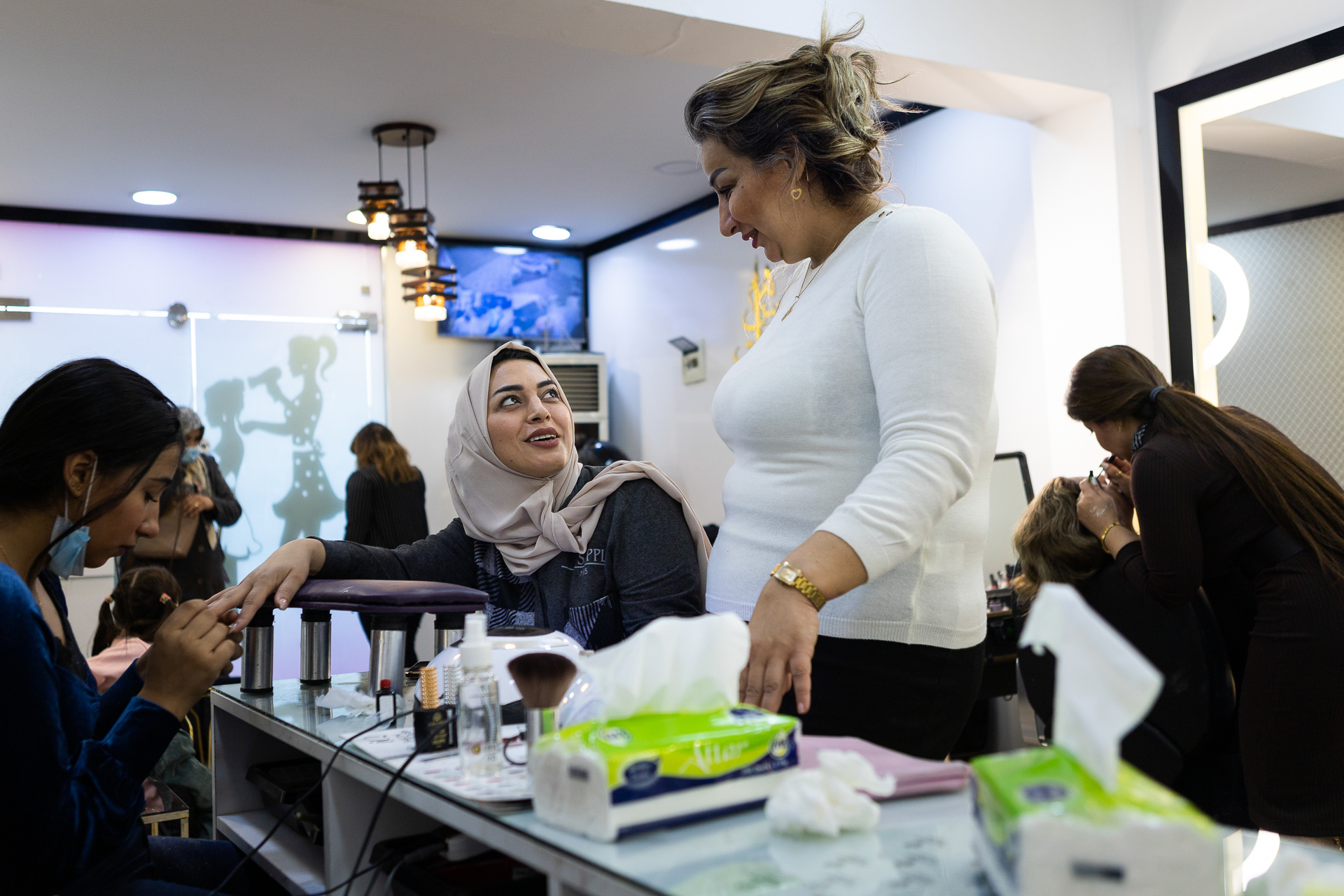 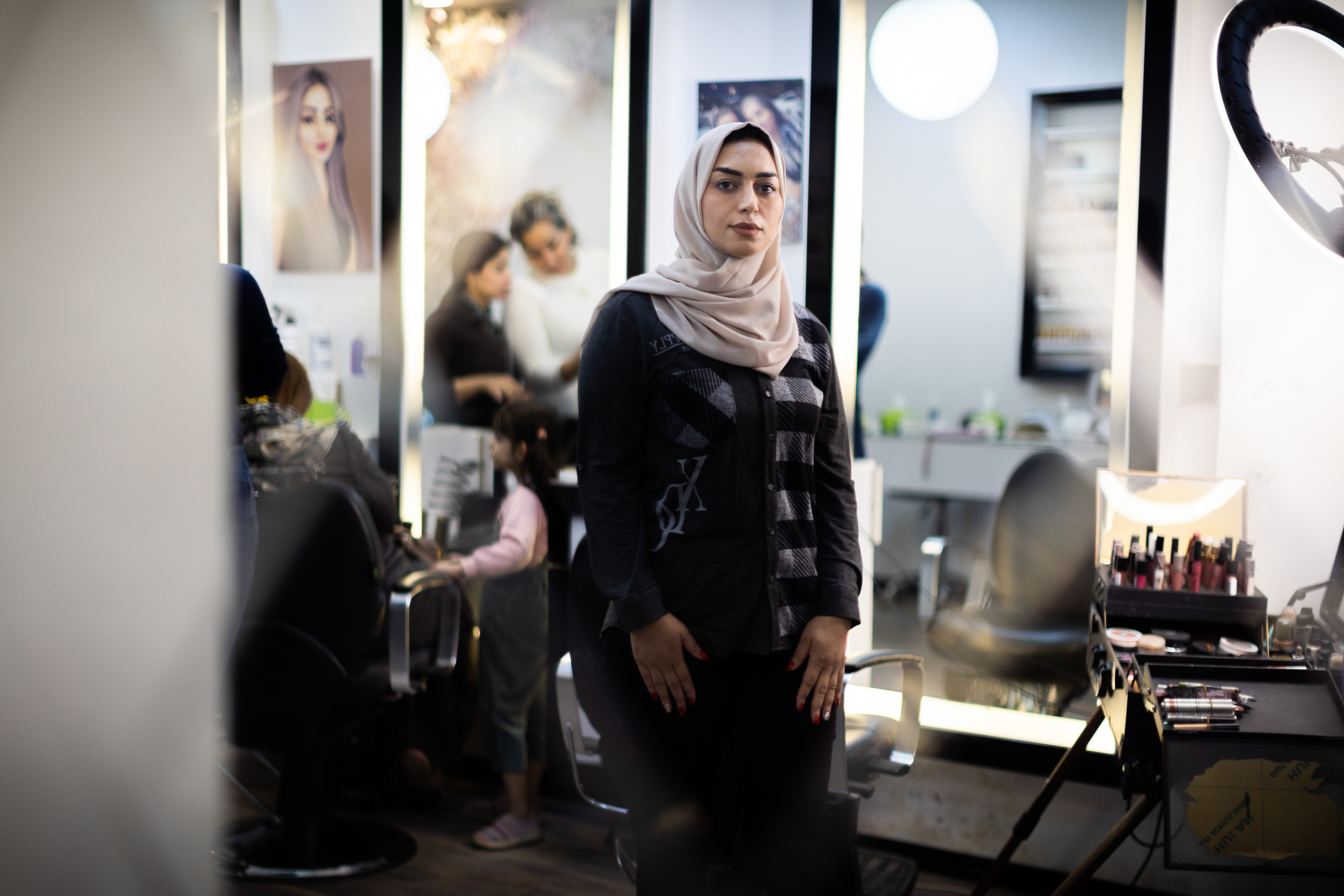 Noor Ahmed started coming to Whispers two years ago in the midst of a personal crisis. Photo: IOM Iraq

The women in the shop sometimes joke that even if Mhabad couldn’t afford to pay them, they would still want to come in, just so they could be together.

“If you work because you need to, of course you won’t enjoy it,” Mhabad said, “But if it’s your passion, it’s not difficult. I enjoy it every day, especially when I see the difference it makes for my employees.”

Through the EDF-w, 293 women-owned businesses, like Mhabad’s, have been provided with over USD 4 million in funding. Overall, these grants have enabled the creation of 1,250 sustainable jobs managed within female-owned businesses.

Shurooq's journey is similar to Mhabad’s, albeit through a different path. She is the co-owner of Whispers, a salon that goes beyond hairdressing to offer a source of livelihood to herself and three others while providing a support system to women in the local community.

In 2007, Shurooq’s brother was killed in a missile strike. Later, she lost a second brother during the peak of violence in the sectarian war. Throughout these hardships, she has continued to work. “Life goes on,” Shurooq says. “One war ends and another starts. Women kept coming to the salon despite the conflict, so we had to keep going.” 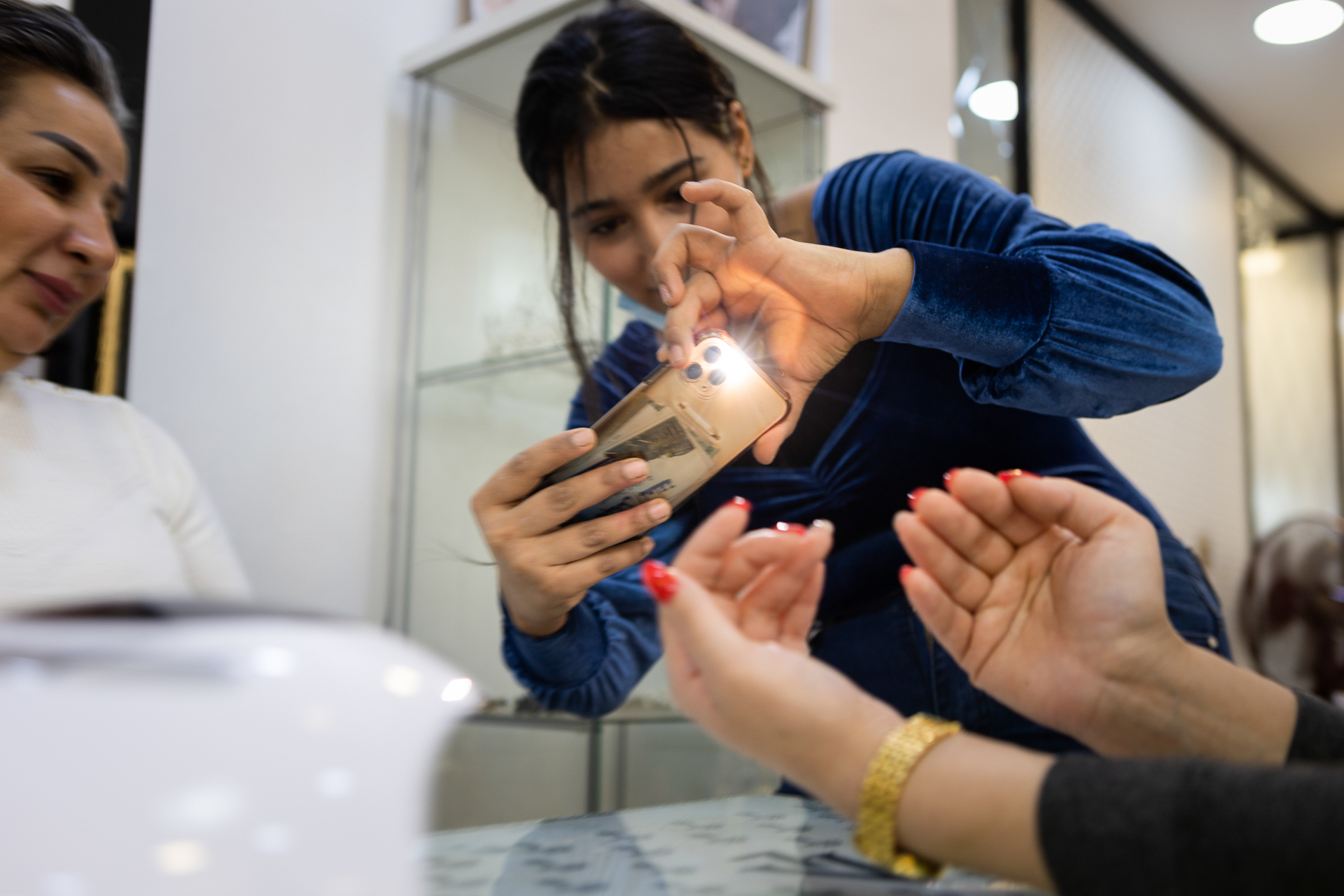 Shurooq’s daughter, Malak Ahmed, 16, now works as a nail specialist at Whispers. Malak says that she feels fulfilled when she’s helping customers. As a smile emerges across her face, she speaks about her work: “I’m so grateful to my mother for giving me this opportunity.”

Shurooq used USD 10,000 in EDF funding to buy a hydrafacial machine and cosmetic laser, as well as hire new employees to operate them. “You have to stay up on current trends and keep your practices relevant,” Shurooq explains. In addition to increasing their customer base, it has delighted the entrepreneur to provide more jobs for women in the community.

“We’re proud to be able to give opportunities to others,” Shurooq reflects. “I want the people we train to really want to learn and to discover their passions.”

The EDF programme aims to support post-conflict economic recovery and development in Iraq by providing financial capital to SMEs in primary and secondary economic sectors with a high labour demand.