A Warm Bed and a Roof Over One’s Head: A Miracle for Many Ukrainians this New Year 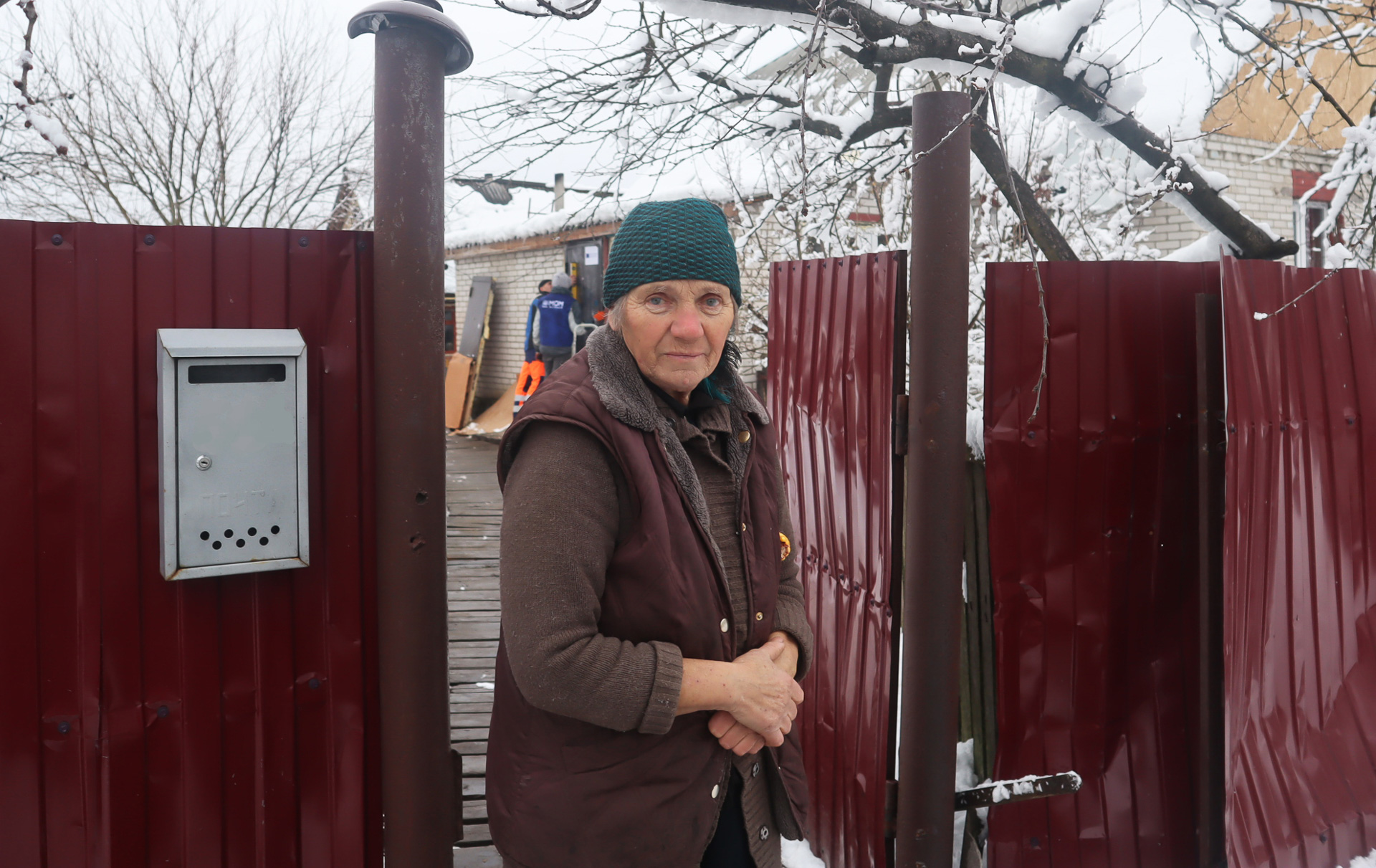 Yulia still finds reasons for small joys and gratitude, but the recent hardships of the war are carved deep into her memory. Photo: IOM/Alisa Kyrpychova

Fedorivka, 11 January 2023 – Ukraine is starting the New Year with mixed feelings. Below-zero temperatures and fresh snow that would have been perfect for outdoor games and sledding have turned houses into cold prisons in the first winter since the war began.

Traditional festivities have been cancelled or modified across the country. Festive spirits are being drowned out by the sounds of the air raid sirens, a constant reminder that the war will soon enter its second year. People are preparing shelters and insulating houses for future power, water and heating cut-offs. 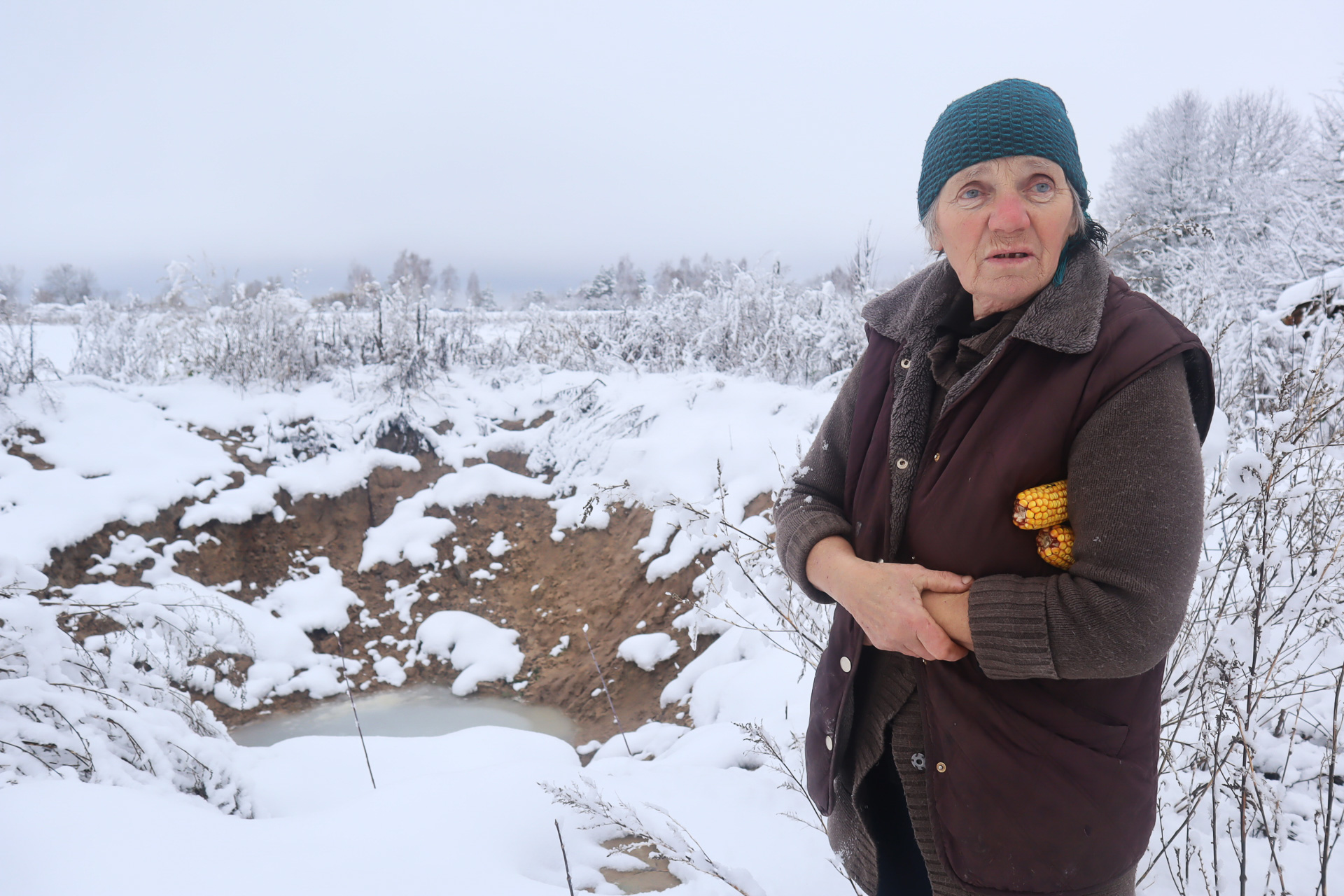 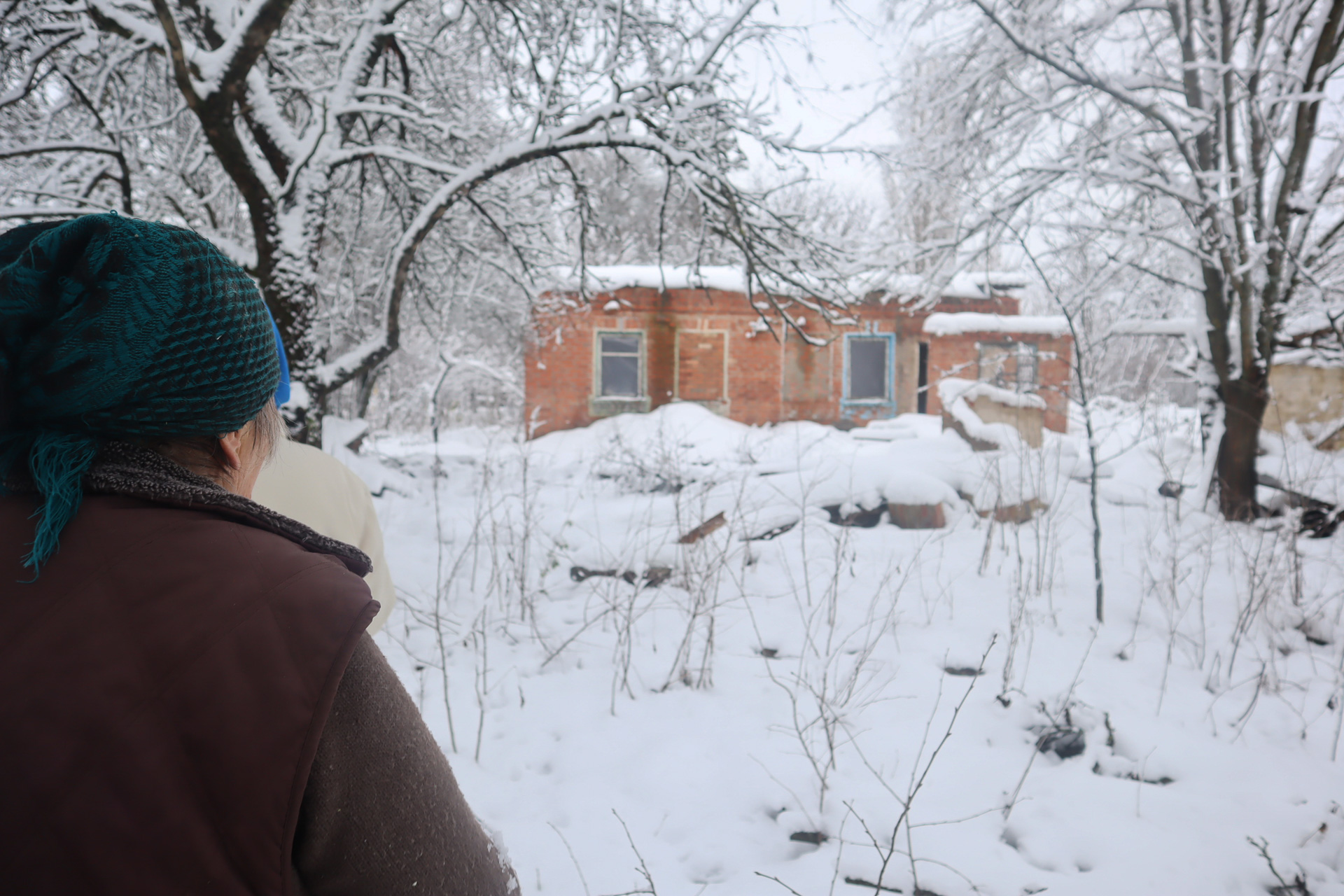 Throughout all her 74 years of life, the tiny village of Fedorivka in the region of Kyiv has been Yulia’s home. Photo: IOM/Alisa Kyrpychova

Despite this, Yulia still finds reasons for small joys and gratitude, but the recent hardships of the war are carved deep into her memory. Throughout her 74 years, the tiny rural village of Fedorivka 90 kilometres southwest of Kyiv has been her home.

Life was not always easy, but after years of hard work, Yulia had a warm home, a garden and livestock – cows, chickens and a horse – enough to provide for herself and have a serene retirement looking after her grandchildren. That was the plan.

Instead, in February 2022, Yulia was forced to hide in a pipe close to a pond nearby with her daughter, son and granddaughter, who just turned one. During the month the village was under the control of the Russian forces, Fedorivka was cut off from vital supplies of medicine and food. People were not aware of what was going on across Ukraine and could only rely on their stocks.

“My son told me that my house was damaged, but a cow and a horse survived. My cow was the only one in the whole village, so we shared our milk with others,” says Yulia. 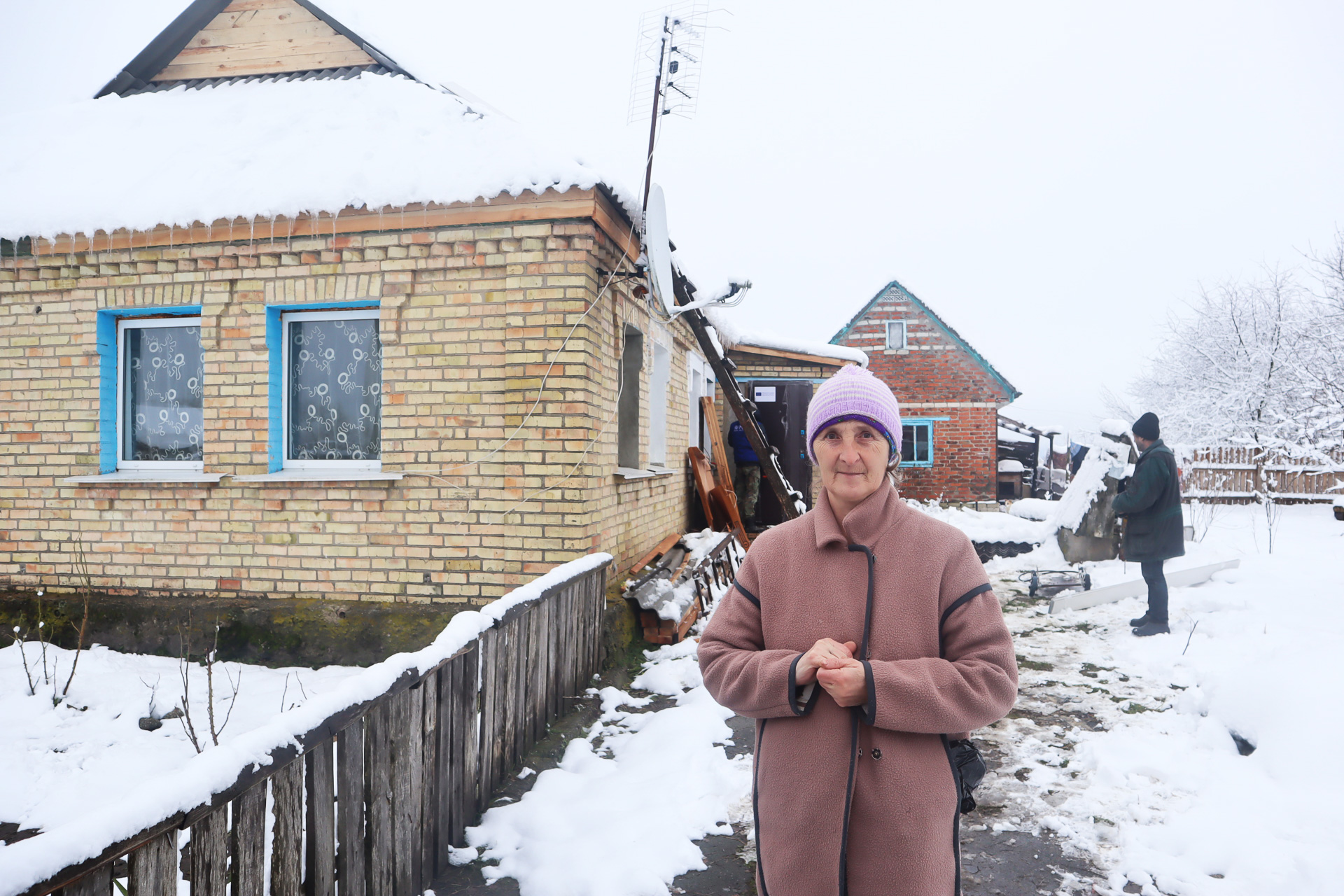 The main door of Liudmyla’s brick house was knocked together by hand from thin boards; shards of glass lay in the yard. Photo: IOM/Alisa Kyrpychova

During the first month of war, the local fish factory gave their stocks away for free so that people could survive. When a shell hit Fedorivka, the smell of burning and smoke filled the air for many days. Many houses – including Yulia’s – were damaged: others, closer to the place the missile struck, were completely destroyed.

Liudmyla lives a ten-minute walk from Yulia. The main door of her brick home was knocked together by hand from thin boards, and shards of glass lie in the yard.

“Columns of military vehicles were constantly moving near my house. I could only pray that my relatives would survive, that nothing would be destroyed,” Liudmyla recalls. “I don’t understand why we have to go through so much pain. We are peaceful, we are on our own land, and we have not caused grief or trouble to anyone.” 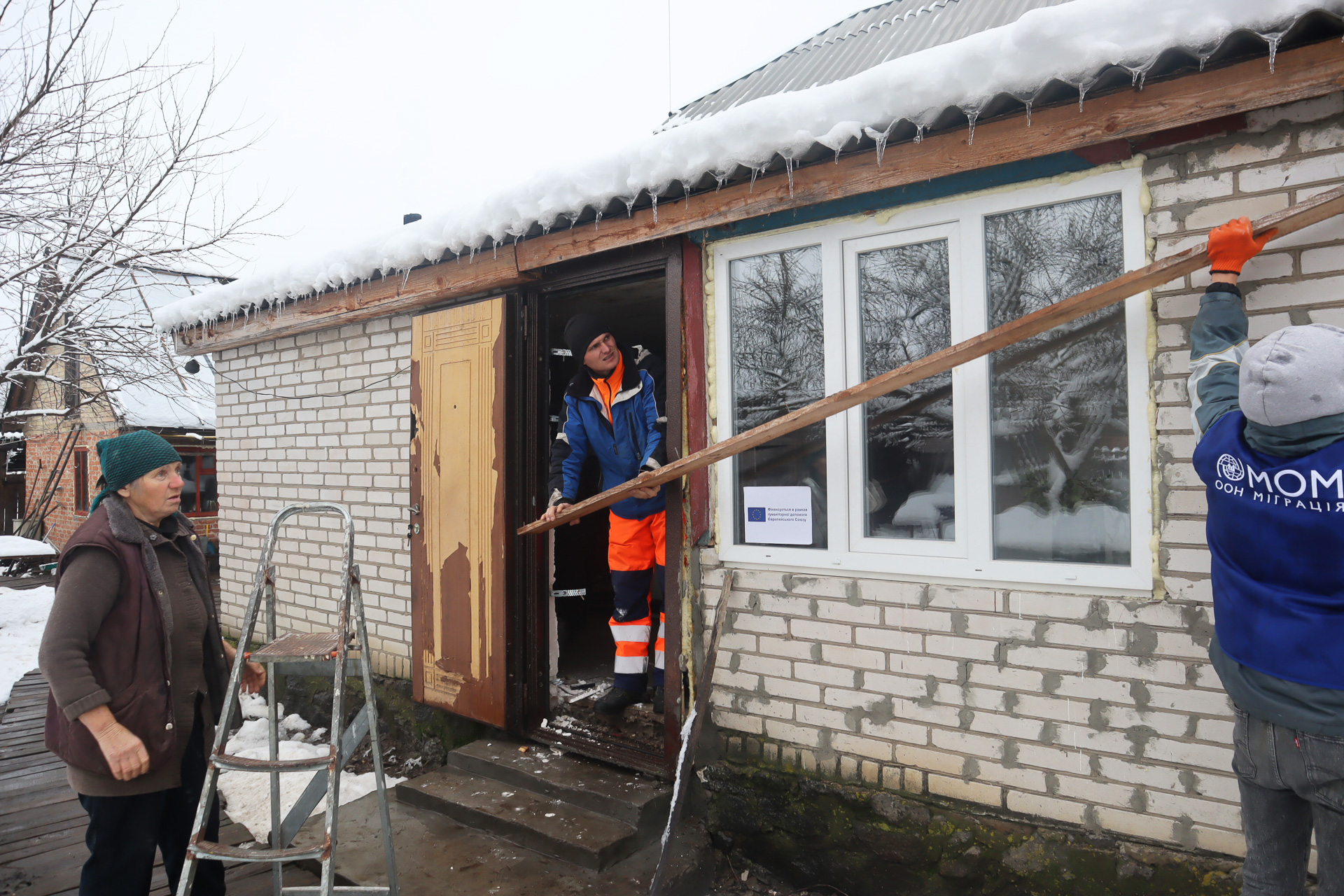 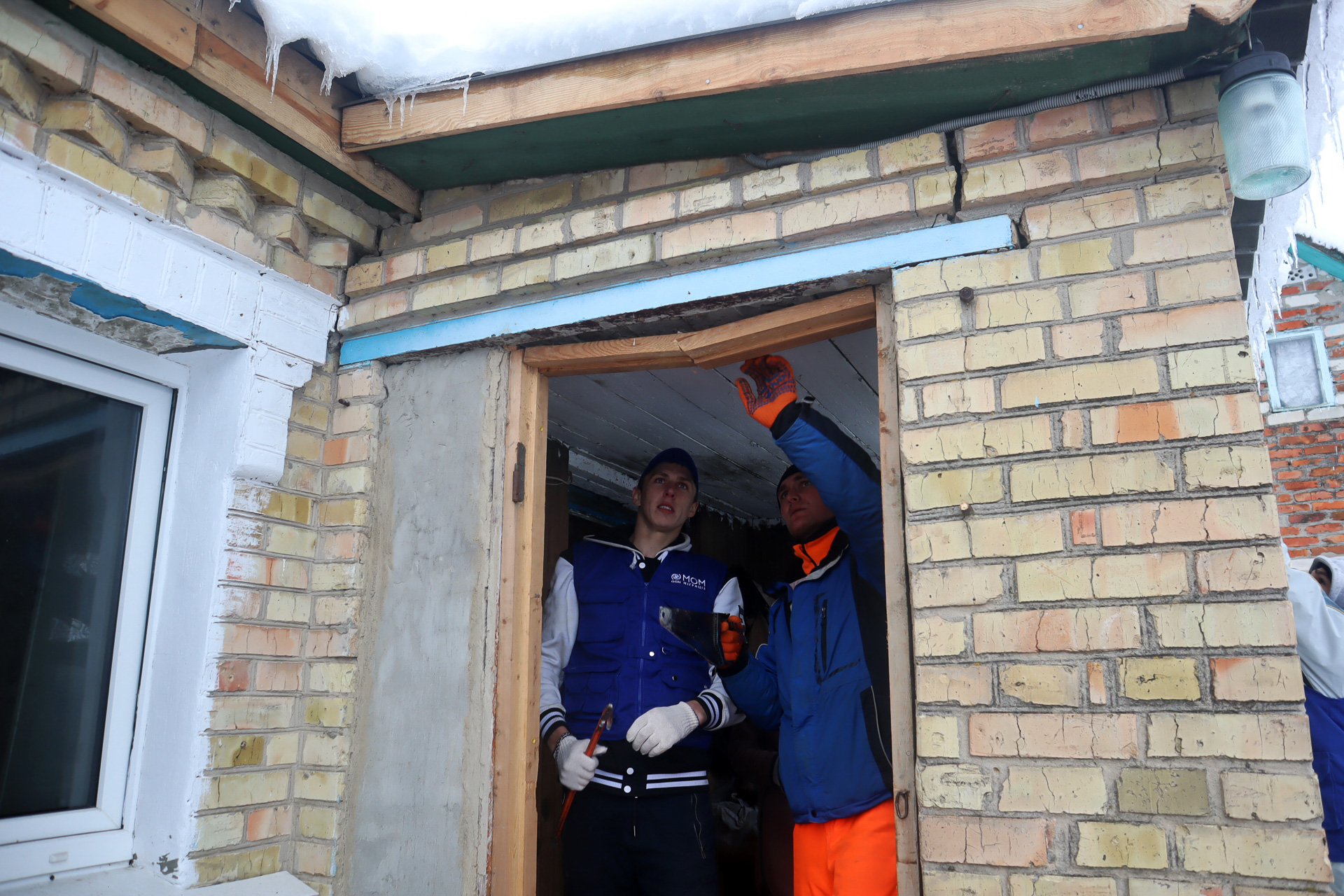 After all the sorrows, the re-taking of the village by the Ukrainian Government gave the villagers a new sense of hope. They started putting the pieces back together, but the elderly, families with many children and people with disabilities – who rely on the modest state pension to survive – couldn't cope on their own.

Yulia and Liudmyla replaced their broken windows and door with plywood, but this was only a temporary solution. With the onset of the cold weather, Liudmyla started preparing for the worst – even if unbearably cold, she would not leave her land.

Help came in November when mobile teams working with the International Organization for Migration (IOM) supported 109 families in the Kyiv Region with renovation works. In Yulia’s house, staff installed seven new windows and a metal door and in Liudmyla’s, they replaced the broken windows and door and helped repair the damaged roof. The works were finished just as the first snow began to fall.

As the new year begins, it is finally warm again in Yulia and Liudmyla’s homes. Wood – a scarce but precious resource – is burning in the stoves. Yulia shows the stock of firewood and food and says, “Come what may, Ukrainians will survive.”

At midnight, celebrating the hope that the new year brings, many Ukrainians made the same wish: to restore peace in 2023 and leave behind the bitter memories of the brutal war that came to their doorstep – and sometimes through it. 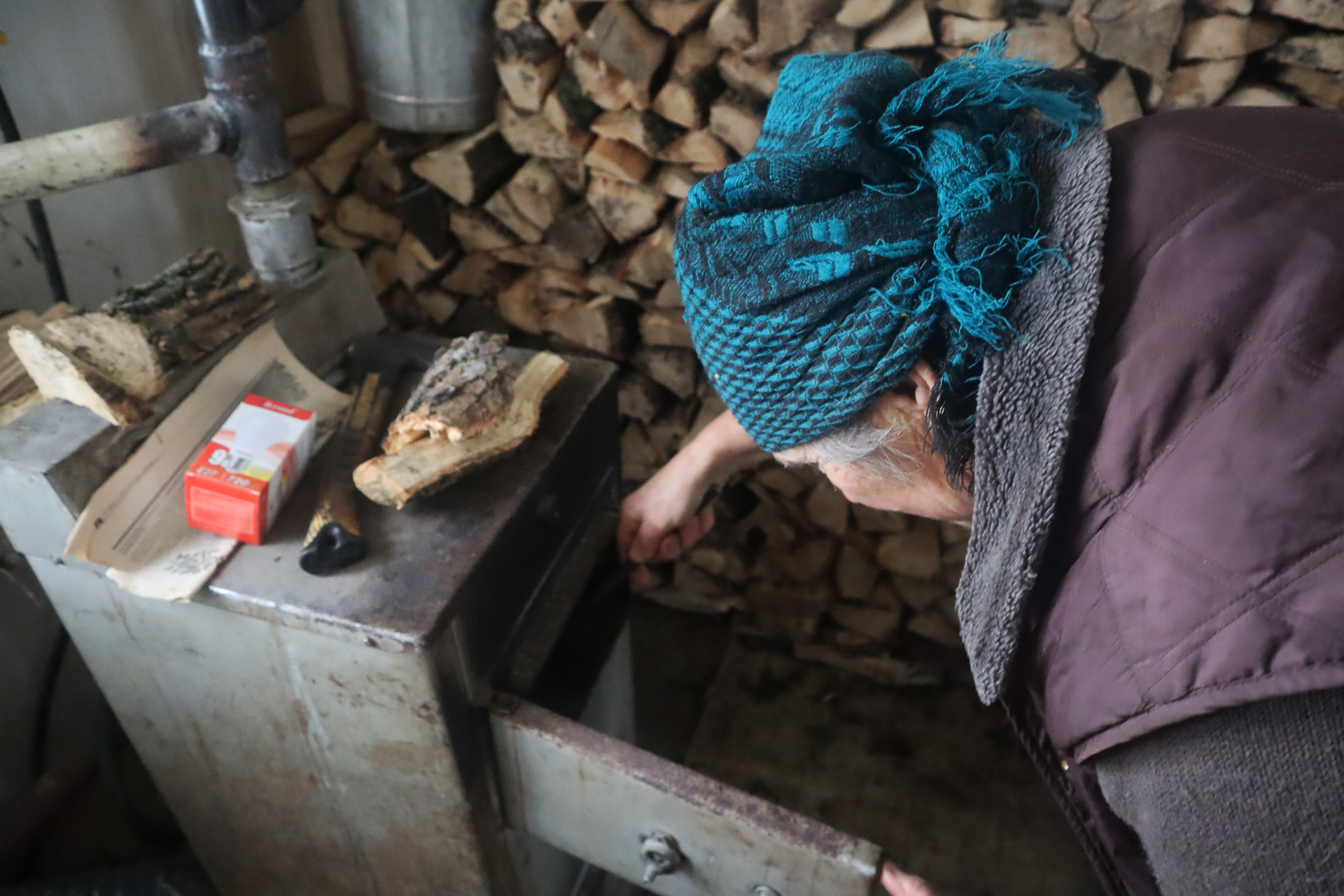 With the onset of the cold weather, Liudmyla started preparing for the worst. Photo: IOM/Alisa Kyrpychova

IOM data shows that the homes of almost half (45 per cent) of all displaced people in Ukraine have been damaged. The lack of financial resources remains the primary barrier (94 per cent) to repairing them. At the same time, despite attacks on power supply and heating systems, only 7 per cent of Ukrainians are actively considering leaving their location. Thanks to funding from its donors, IOM has been able to conduct repair works in the regions of Kyiv, Chernihiv, Sumy, Kharkiv and Dnipro, which have been severely affected by shelling.

This story was written by Alisa Kyrpychova, Communications Assistant with IOM Ukraine, akyrpychova@iom.int.

If you are interested in donating to Ukraine relief efforts, please visit IOM's fundraising page.