Water is Life: The Value of Water in North-east Nigeria

The conflict has left 8.7 million people in need of some form of humanitarian assistance in 2021. Food insecurity, a lack of livelihood opportunities, and insecurity have been further exacerbated by the onset of the COVID-19 pandemic. In the north-east of the country, internally displaced persons (IDPs) also grapple with a lack of water in the dry season, spanning the months of October to April, and with contaminated water during the wetter months.

Over 2.1 million IDPs living in camps and camp-like settings and host communities rely on a steady water supply and safe access to clean water to drink, prevent disease and keep their businesses afloat. 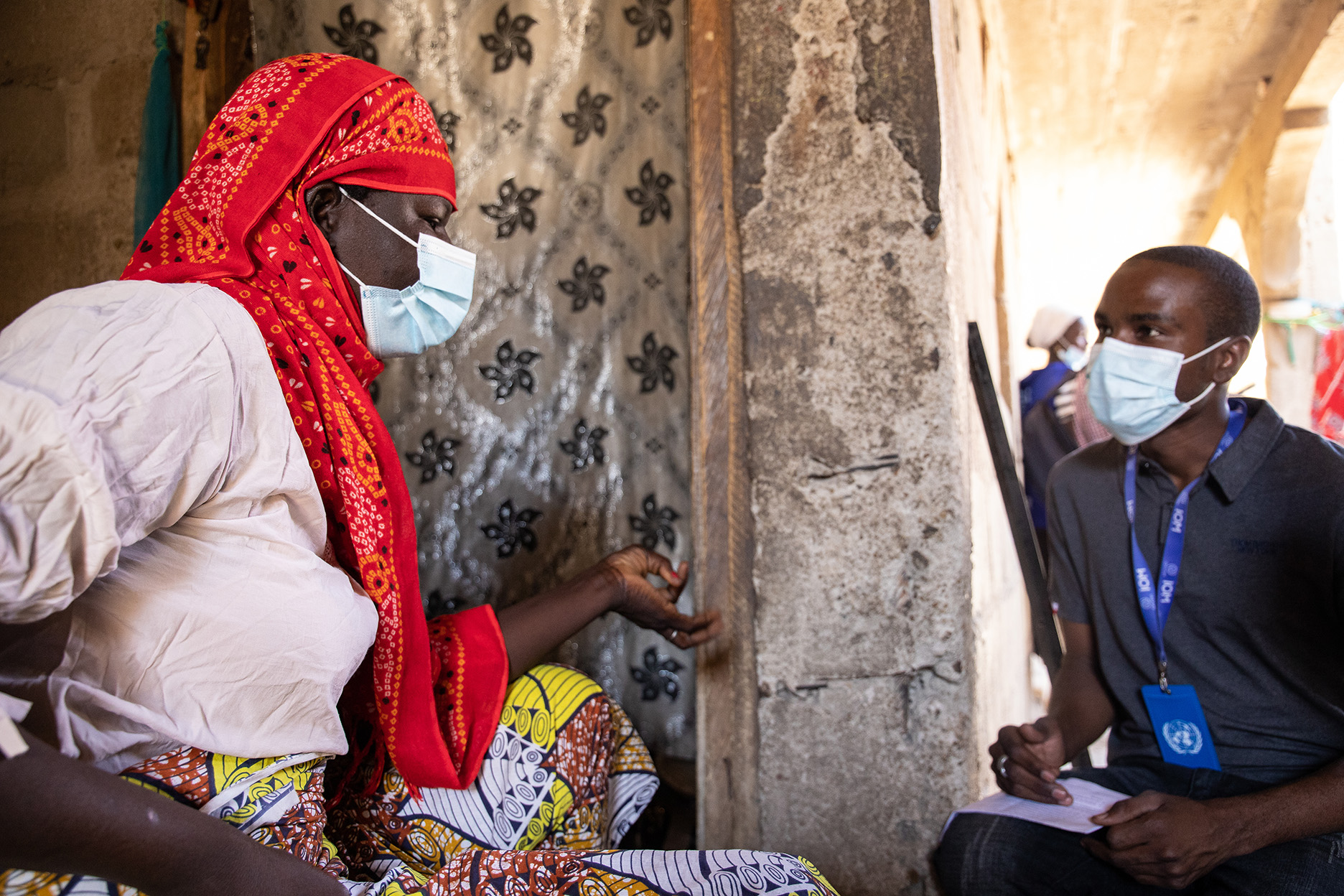 Monica is one of 295 internally displaced people living in the informal camp of St. Hilary. Photo: IOM/Mshelia Yakubu

Monica Iliya is one such IDP currently living in St. Hilary Camp with her five children. Monica, 52, fled her home in 2011 when non-state armed groups raided her village in Dala, on the periphery of Maiduguri.

“I lost my husband during the attack… We ran away to Michika (a town on the border with Cameroon), and from there we had to flee again, so we came back to Maiduguri,” she says.

St. Hilary Camp is an informal settlement in Maiduguri, Borno, the state worst-affected by the humanitarian crisis. The site was previously built to be an administrative building of a local church before the start of the conflict in Borno. The bare concrete structure now provides refuge for 295 individuals.

In 2020, the International Organization for Migration (IOM) rehabilitated a borehole that provides water to camp residents as well as the neighboring host community.

Sitting in the courtyard of the building, Monica pauses when asked what water means to her. “Water is life – without water, humans cannot exist,” she says.

“We didn’t have water before… There is no light in town, so we didn’t have electricity to power the previous borehole so we would normally go and beg to fetch water in people’s houses.”

Her main source of income comes from knitting sweaters, a practice she has passed on to one of her daughters who now helps her support the family. Monica rejoices as she says that her children no longer go out without bathing.

Not far from St. Hilary, along a labyrinth of unpaved roads flanked by market stalls, lies Suleimanti Camp, another informal settlement. Next to the camp, children living in the neighboring houses fill up their jerrycans and buckets at a water collection point before loading their carts. As the children leave, others come to take their place in the queue that leads to one of the water taps.

At the entrance of the camp, Furiara Abdulwaha, 27, tends to her business as her son rests on her lap. Like Monica, she uses the water from the borehole for drinking, cooking and other domestic chores. A mother of eight sons, Furiara is one of the many women in Borno who have lost their husbands to violence or disease and now must single-handedly provide for her family. 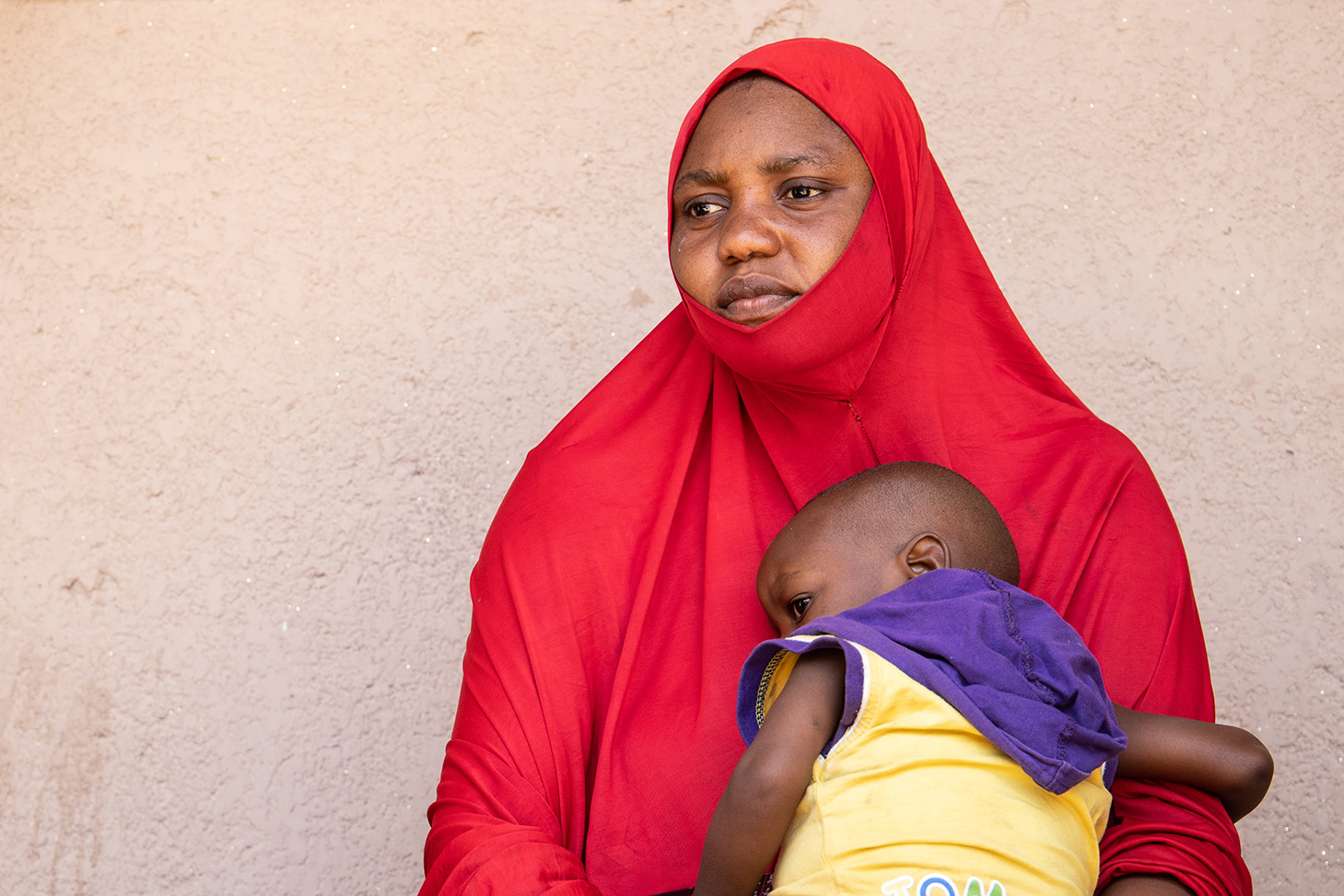 Furiara and her baby shelter from the sun. The temperature in Maiduguri can reach above 40 degrees Celsius. Photo: IOM/Mshelia Yakubu

“Water used to be scarce before,” she says sitting under the shade of her porch. “We used to buy water from vendors but ever since IOM rehabilitated this borehole, we have enough water.”

“I used to spend a lot of money buying water, but now I use that money for my business.”

Furiara sells tiger nut juice and zobo, an infusion made from hibiscus. When asked which one is more popular among her customers, she shrugs shyly. “During the hot weather zobo is very popular,” one passerby asserts.

She smiles as she greets the local camp volunteers who come to visit her and buy a drink to keep the scorching heat at bay. 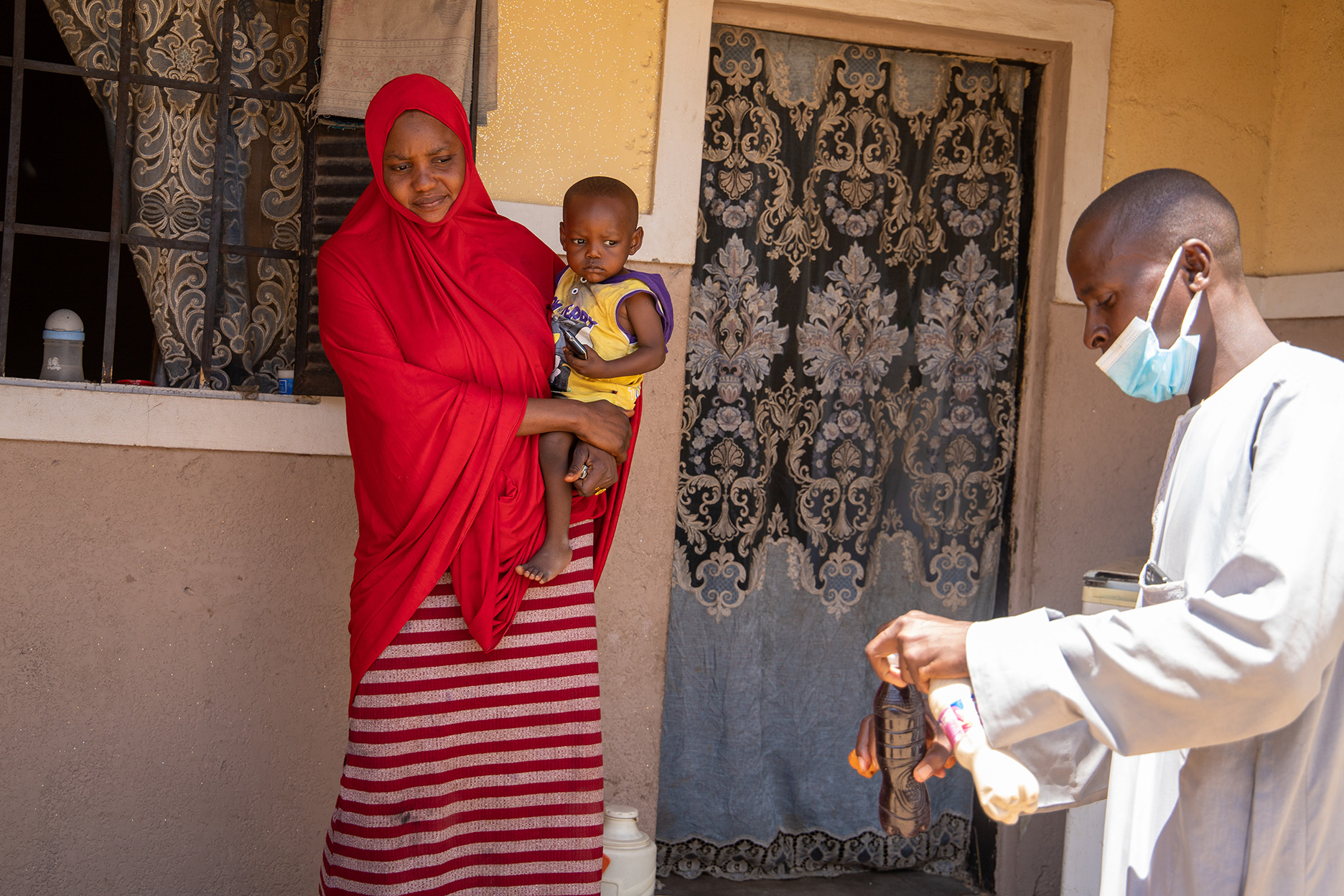 Inside the camp, more people gather to collect water for the day. Camp residents have access to 19 liters of water daily distributed via two water points.

Abatcha Bukar arrived from Konduga seven years ago in the camp.

“Boko Haram came to my town, that’s why I left,” he says.

“Life before the conflict was prosperous; we had everything we needed in our town… Our greatest hardship now is the lack of food, but we are thankful for the support we are getting because water is plentiful, unlike before.”

Last year, IOM designed and installed 659 foot-operated handwashing stations in Borno and Adamawa States which prevent the spread of COVID-19 by avoiding contact with surfaces while allowing for adequate hand hygiene. Abatcha is one of the 1,060 IDPs in the camp who uses the stations daily. 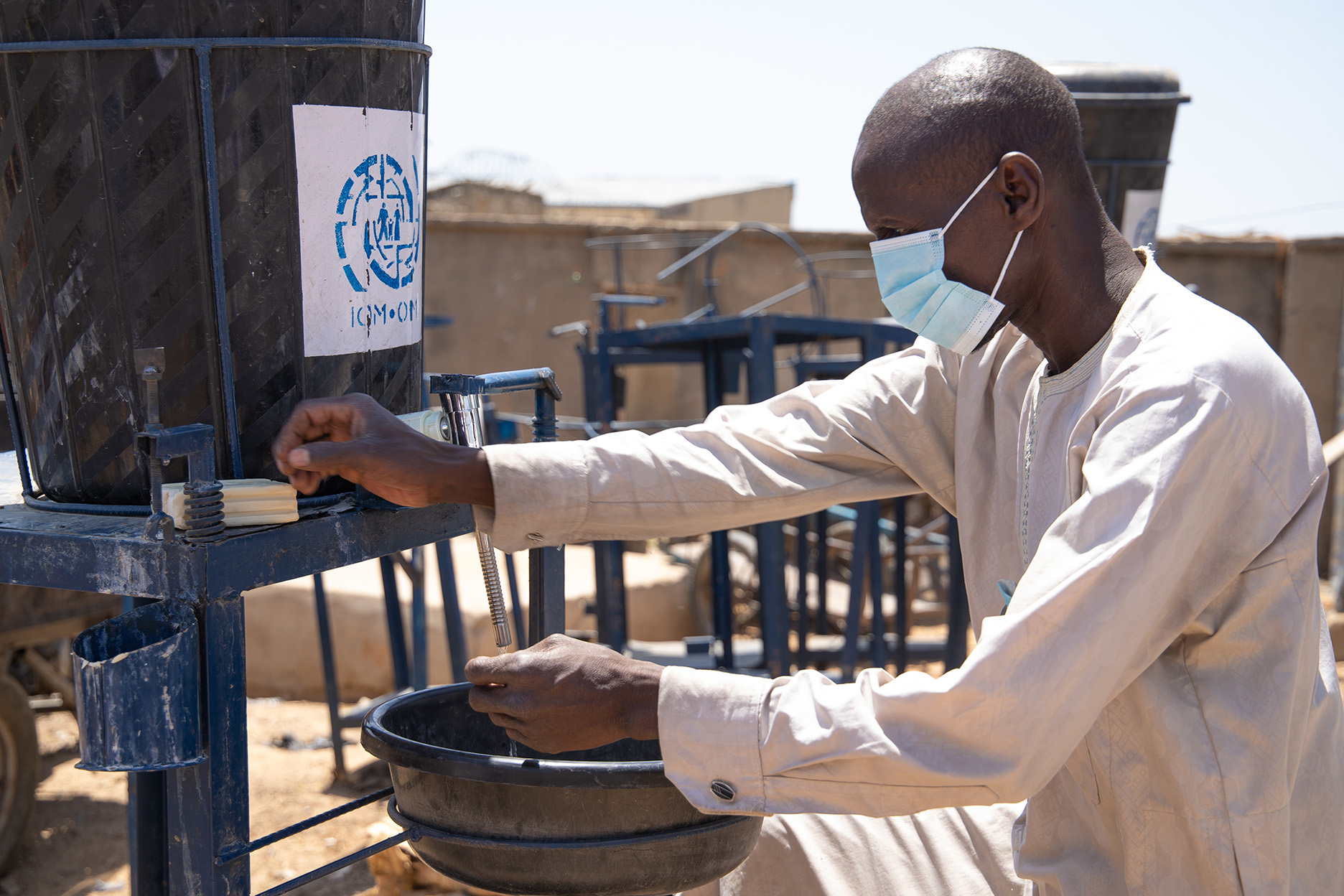 Abatcha reaches for the soap as he steps on the pedal to open the water tap in one of the handwashing stations in Suleimanti Camp, Maiduguri. Photo: IOM/Mshelia Yakubu

With his arms outstretched, Abatcha says proudly that he endeavors to raise awareness among his family of the importance of physical distancing and reporting COVID-19 symptoms.

“I always tell them that if their temperature is high, they should inform me immediately.”

Ensuring access to safe, equitable and adequate Water, Sanitation and Hygiene (WASH) services for the conflict-affected population is a crucial life-saving activity. In 2020, IOM scaled up its WASH interventions in 134 sites in Borno and Adamawa States. In the first quarter of 2021, nearly 630,000 people benefitted from the WASH services.

On this year’s World Water Day, we are asked to reflect on the value of water in our daily lives. For many of us, water may be taken for granted, but for the people in north-east Nigeria, such vital needs have incommensurable value. For them, this day is another opportunity to wish for peace, and for the conflict to be washed away like a distant memory.